Storm in a teacup: Abandoned monument of Soviet engineering gathering rust in Crimea

Travel
Alexandra Guzeva
The pictures we're about to show you would probably provide the perfect backdrop for a horror movie. Soviet genius scientists tried to imitate sea storms in this place. And you’ll be astonished to see what enormous gadgets they used to achieve it. 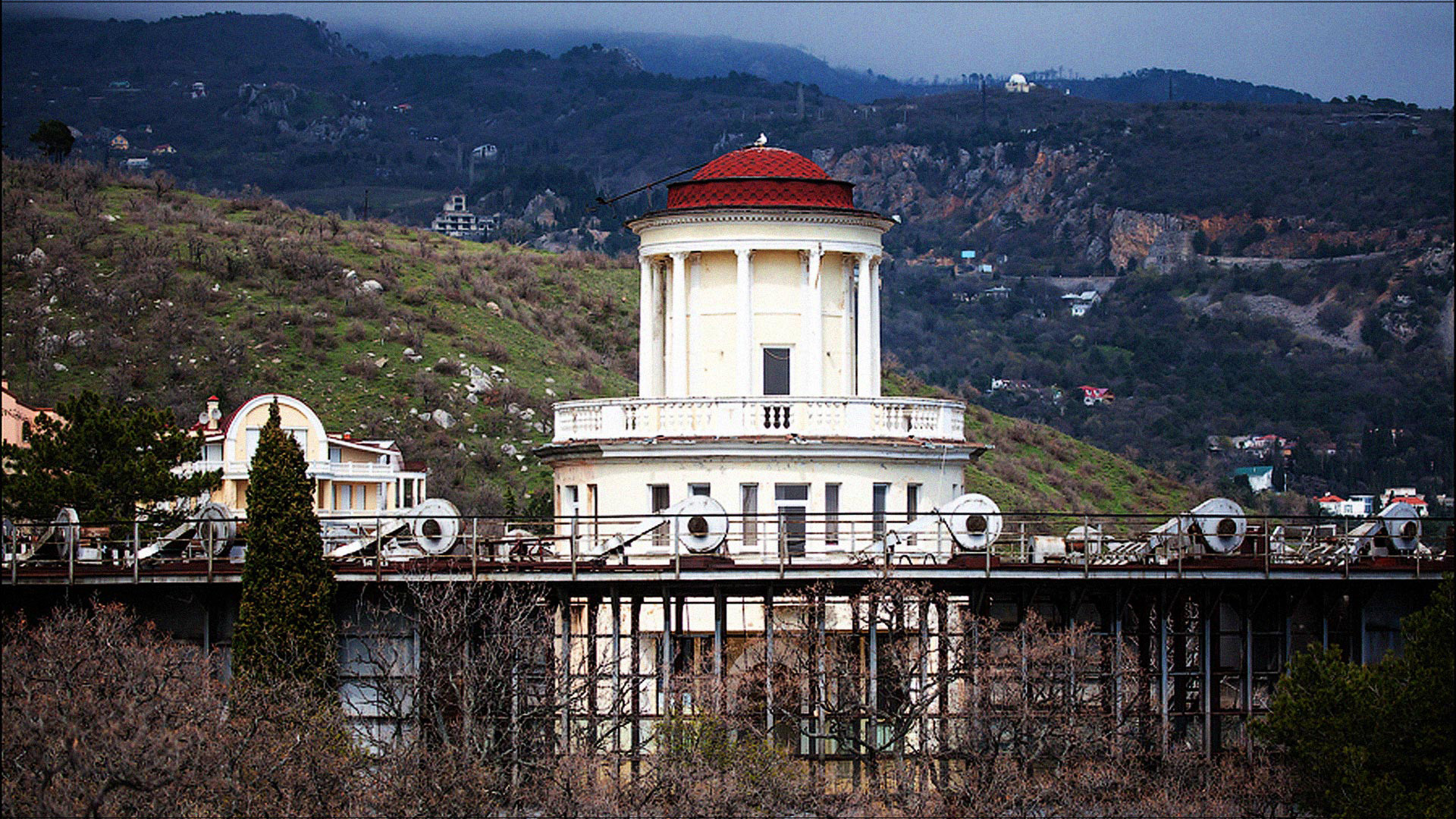 The Soviet Union created gigantic constructions, and big industry tried to dominate even nature. So why not make your own artificial waves to investigate them? This is a storm pool created in 1953 for scientific research. The brainchild belonged to physicist Vladimir Shuleikin, a pioneer in Soviet marine physics, hydrometeorology, geophysics and offshore prospecting. 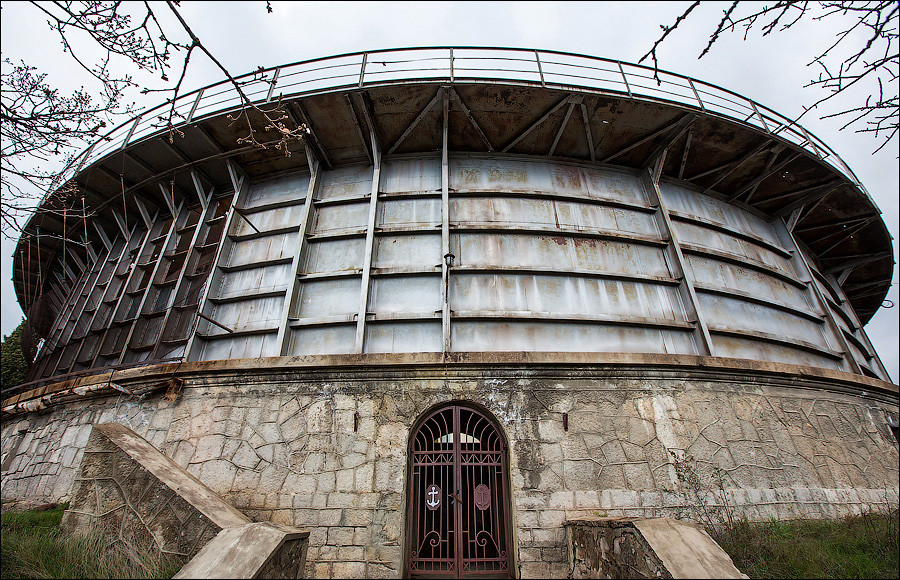 This is a unique construction situated in the town of Katsiveli, not far from Yalta, on the picturesque Black Sea shore of Crimea. Officially it’s titled an aerohydrodynamic channel. 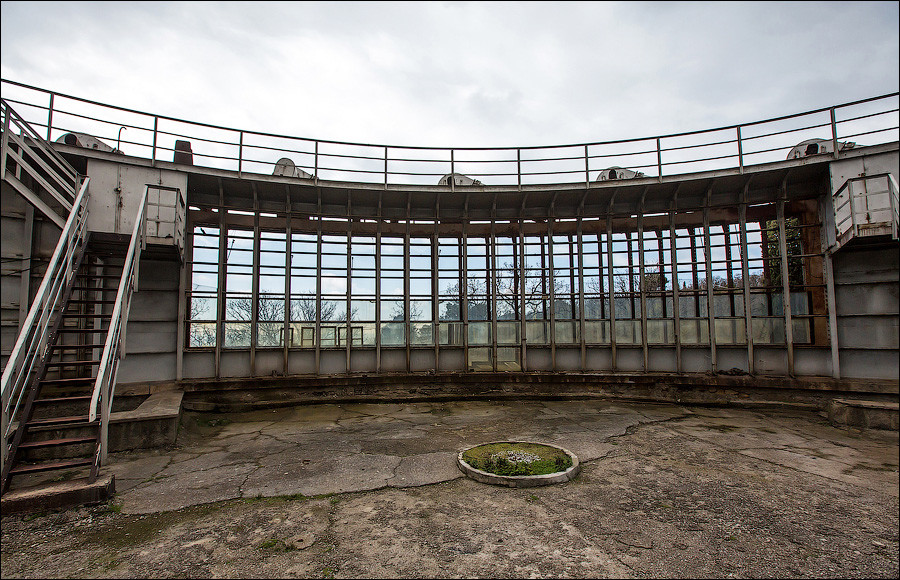 It looks like a 5.6-meter high rotunda, which is 40 meters in diameter. Its walls are covered partly with thick glass and partly with steel sheets - as well as the roof and the floor. 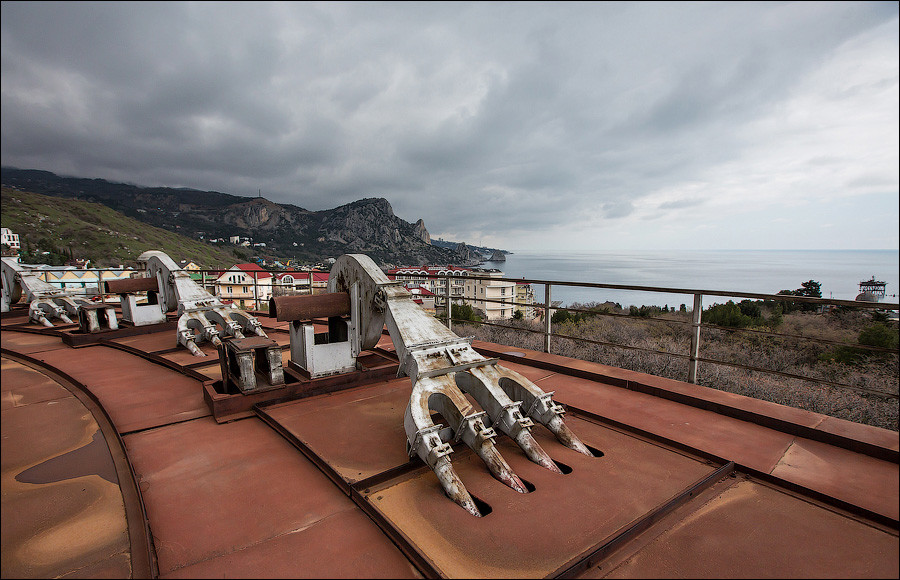 The physicists filled the pool with sea water about three meters high and turned on the big ventilators. You can see them in these pictures – the iron constructions that look like fingers. 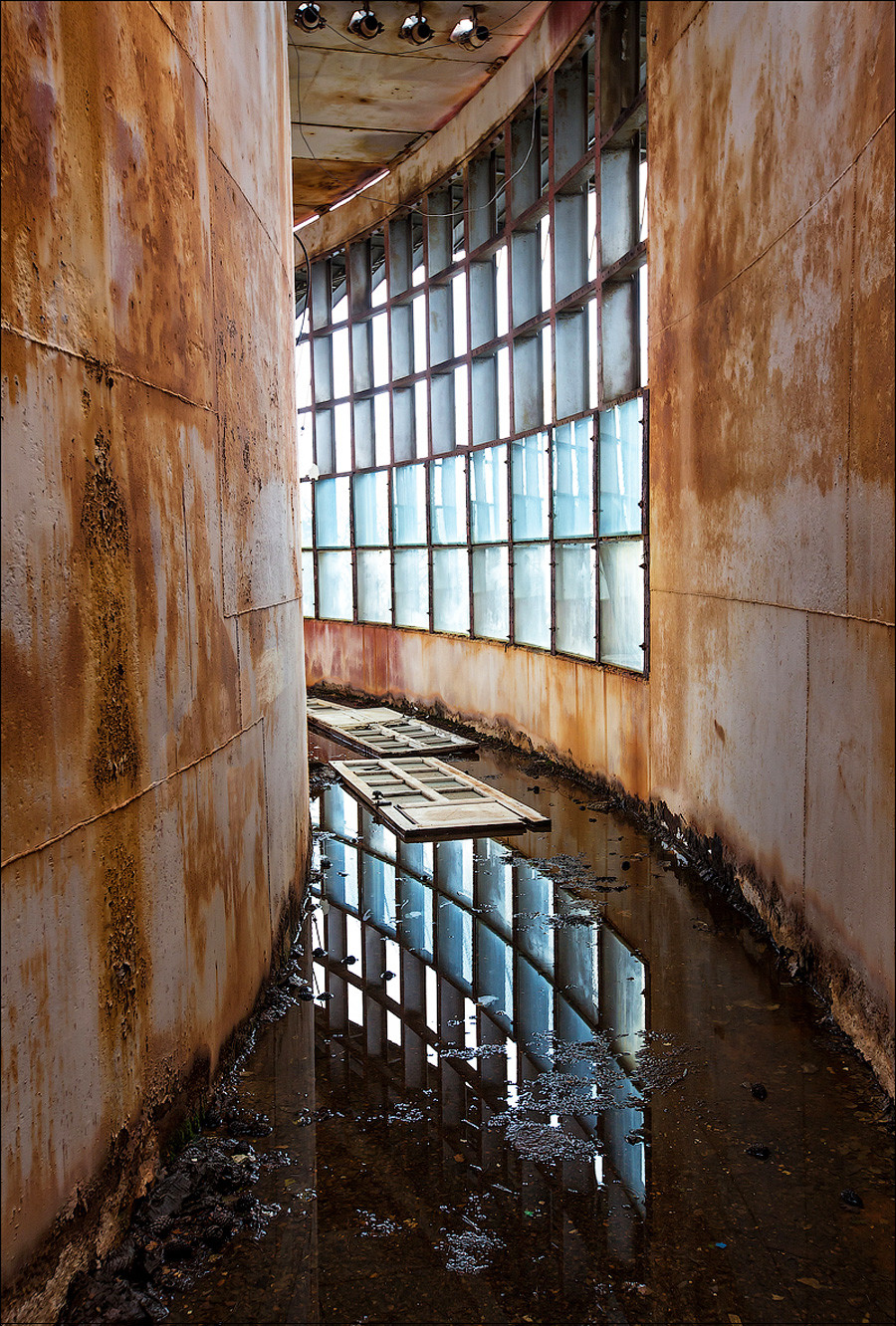 This is how the pool looks from the inside, and on the you can see the ventilator apertures. They could create a wind up to 19 meters per second, thereby imitating a sea storm with big waves. 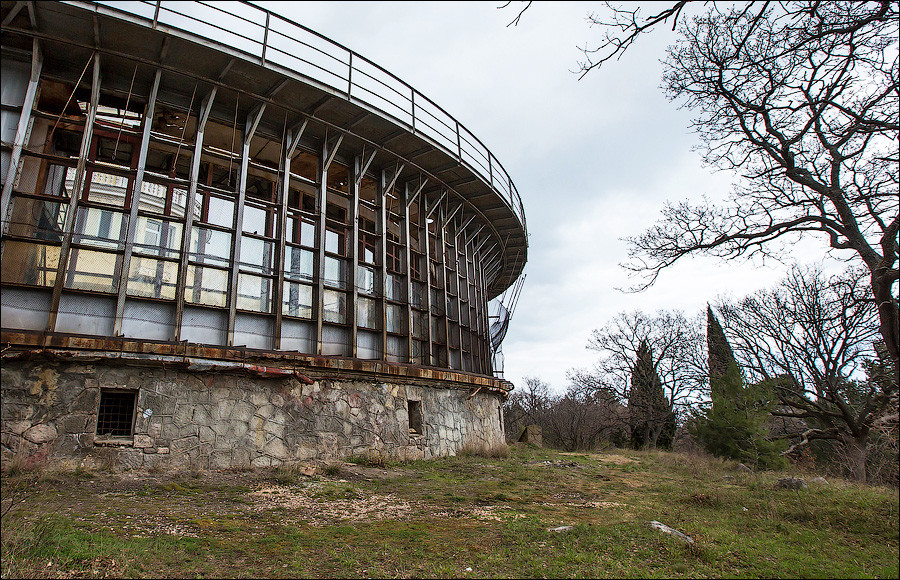 For some in Soviet times the expensive construction wasn't in high demand, though it was used from time to time by several physics institutes. Some scientists say the idea of the round pool was not much good: the centrifugal force has a big effect on the waves, making the research useless and not applicable to the real conditions found in nature. 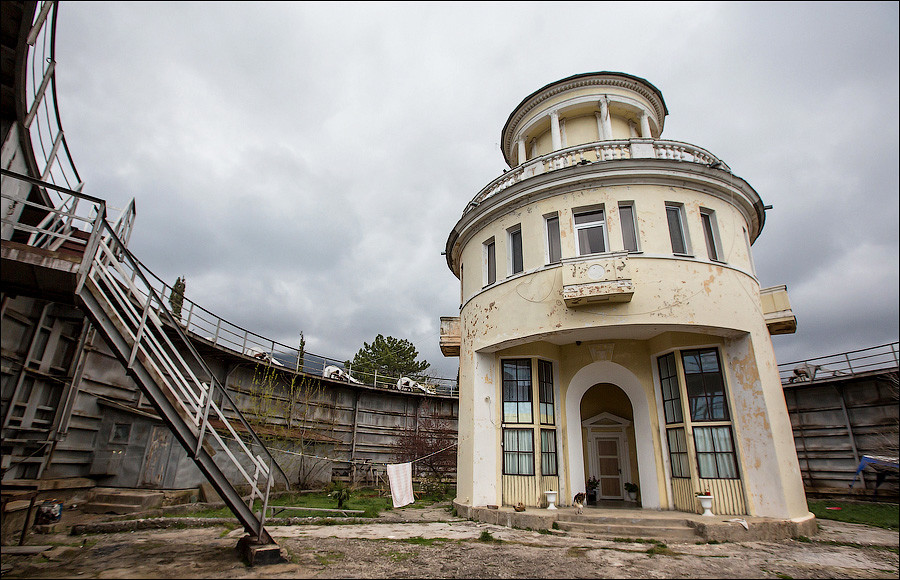 In the middle of the rotunda stands a tower, designed by famous Soviet constructivism architect Alexey Shchusev. There were working and living rooms inside. 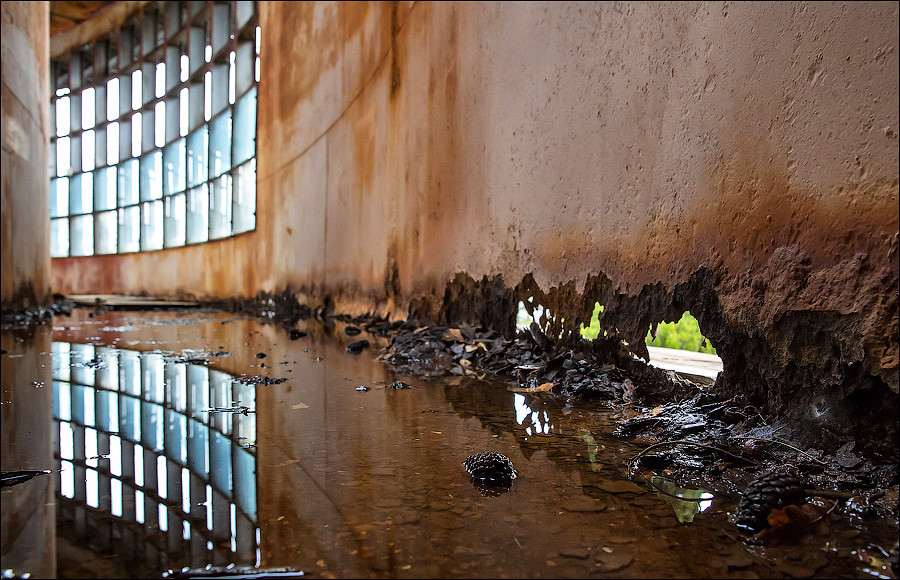 There are rumors that Soviet scientists let dolphins inside the pool for research purposes. “I doubt it,” says photographer Sergey Anaskevitch. “There is just no gateway to let the animals in or out.” 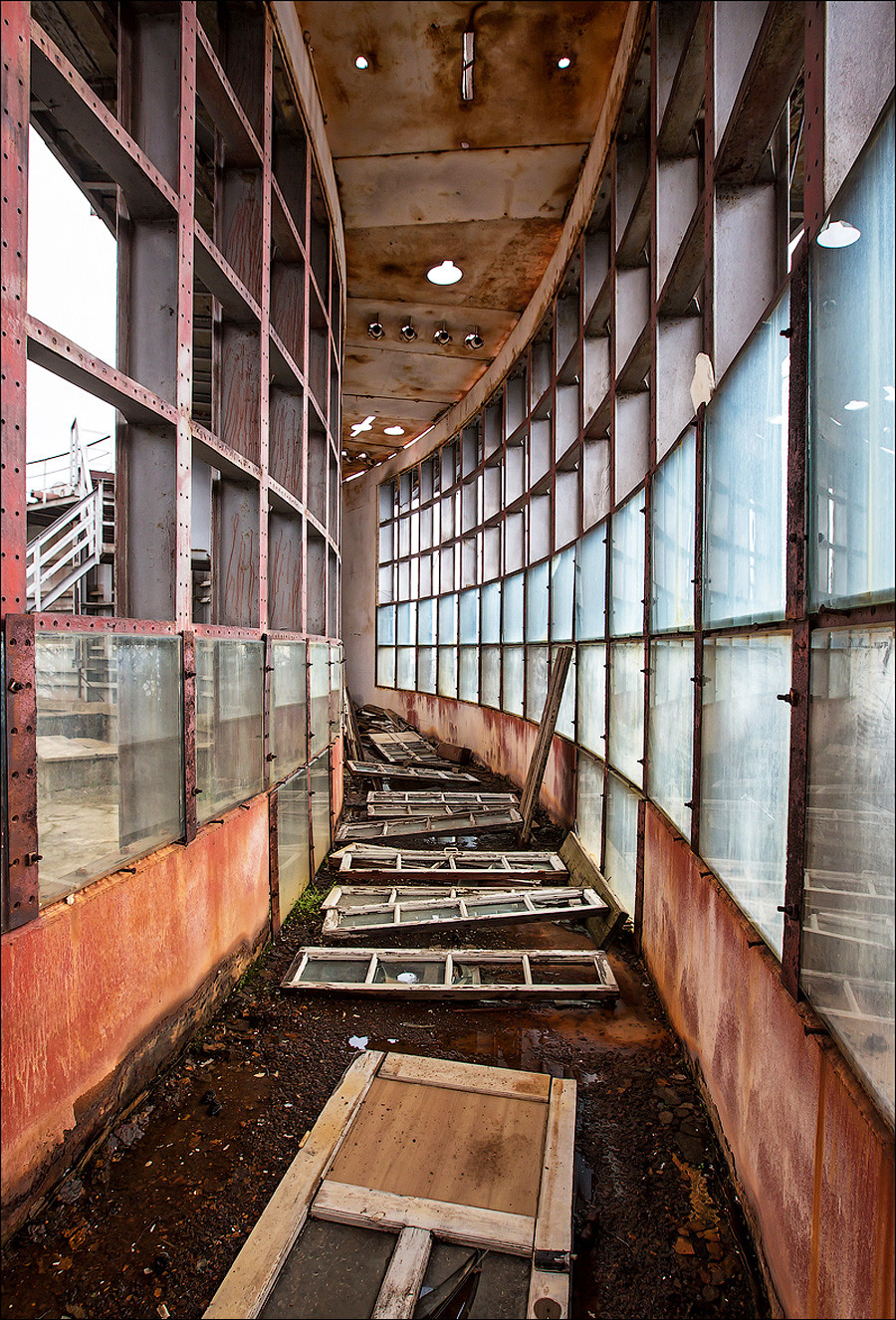 This site really was used as a backdrop for the adventure series Hetairas of Mayor Sokolov, featuring a brave officer hunting down terrorists at the start of WW2, here in Crimea. The place is not well known in Russia, it would probably be one of the most frequently Instagrammed locations and for sure a place for shooting different footage. 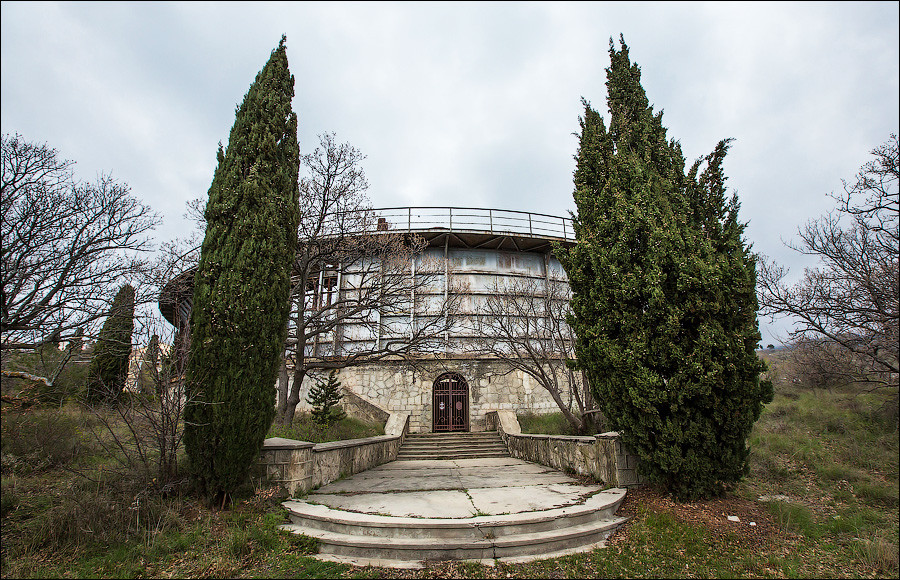 Today there is absolutely no need for such a pool, as there are smart technologies to model and simulate any storms or . As a result, this half-ruined, picturesquely located construction simply sits there, accumulating rust.