Stadium guide: The 12 venues that will make the 2018 World Cup truly memorable 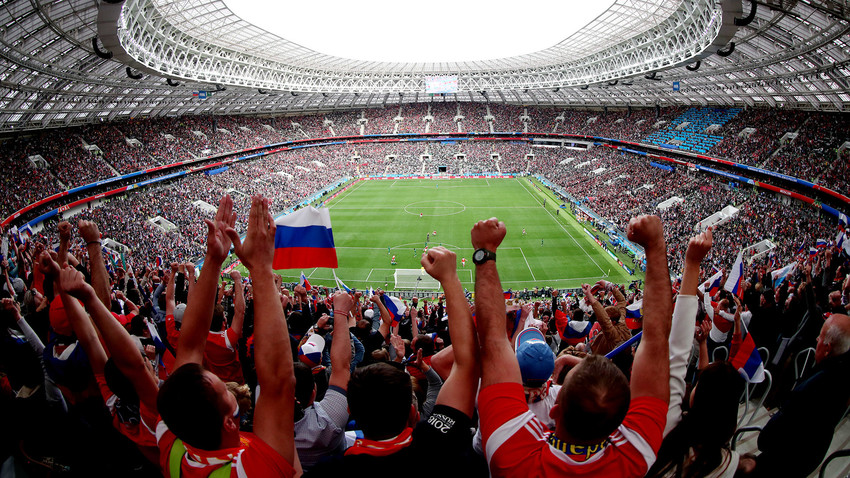 Getty Images
Russia has been working for years to prepare its venues for the World Cup, and the results are breathtaking. Here’s everything you need to know ahead of your footballing pilgrimage this summer. 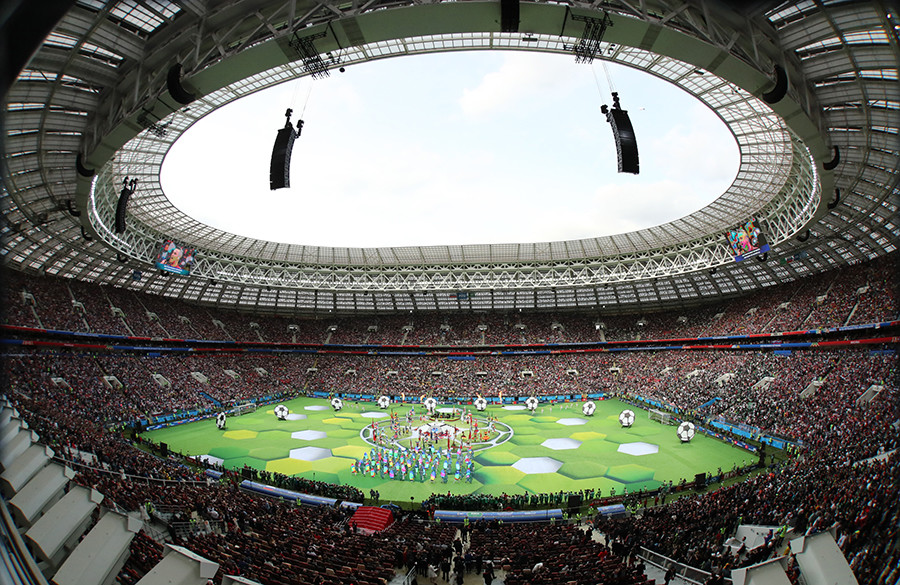 First cutting the ribbon in 1956 as the Central Lenin Stadium, the nation’s biggest sporting venue is also its most historic, and will serve as the centerpiece of the World Cup. Hosting the opening fixture and the final (as well as five other matches) should be no problem for this 80,000-seat dome, which previously set the stage for the 2008 Champions League Final, the 1999 UEFA Cup Final, and the 1980 Olympics. After closing its doors in 2013 for hefty renovations, it was reopened last November and is looking ready to rock.

Best viewed from Sparrow Hills on the other side of the Moscow River, Luzhniki is as iconic as it is grandiose, picturesquely dividing the Moscow skyline from Moscow State University and giving its matches a just sense of occasion.

Luzhniki is easily accessed by metro, either from Sportivnaya or Vorobyovy Gory (both on line 1). The latter station boasts a picturesque nearby funicular station, which will bring you to the stadium in style over the river. Those wanting to avoid the worst of the crowds might alternatively want to get off a stop early at Frunzenskaya and make the two-kilometer walk to the stadium, with a food stop at the stunning Usachevsky Market. 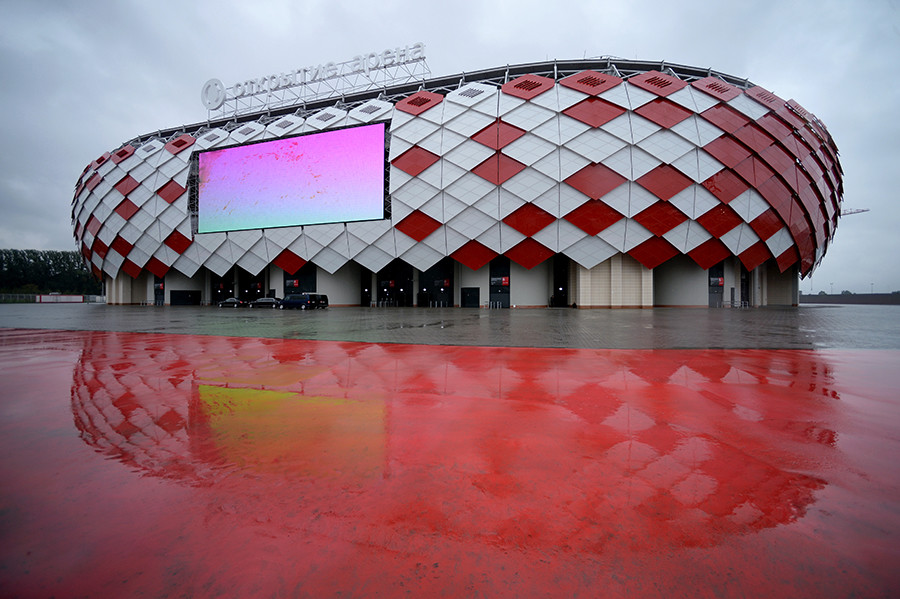 The new ground for Spartak Moscow, who previously occupied Luzhniki, seemed forever doomed to be a work-in-progress until given a boost by Russia’s World Cup bid. Finally finished in 2014, the 45,000-seat stadium in Moscow’s northwest Tushino Disctrict has been a hit among supporters, and will give fans a more local club vibe during the matches there – as opposed to Luzhniki. It’s a smaller more closed-in arena with seats close to the pitch.

Naturally, the stadium links up to Spartak metro station, located on line 7. It is also within walking distance of Tushino station.

Russia’s second biggest stadium was recently opened in St. Petersburg amid great controversy – it had been subject to a series of FIFA safety complaints and fraud allegations (the stadium mysteriously took almost ten years to build and cost over $1bn, making it one of the most expensive arenas of all time). 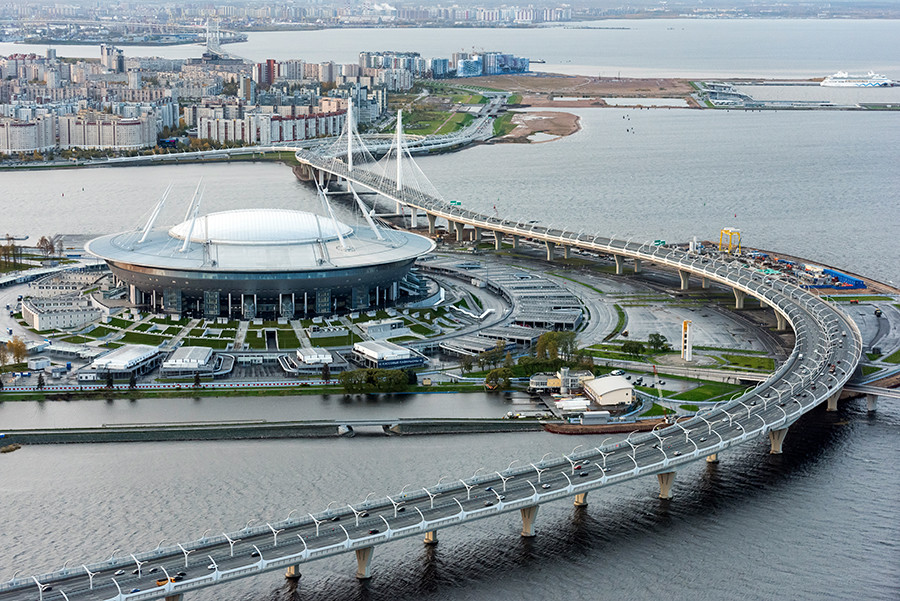 Nonetheless, the price tag is reflected in the bowl’s wow factor: Zenit St. Petersburg’s new home is a sight to behold along the Neva River, boasting a sleek, metallic, spaceship-esque exterior and a series of complex overhead beams.

However, unlike Zenit’s previous Petrvosky Stadium, the Krestovsky is a little further out. It can nonetheless be reached from the city centre via metro, either via Novokrestovskaya station (line 3) or Krestovsky Ostrov (line 5). It’s also worth crossing the nearby Yakhtenny Bridge to soak up one of St. Petersburg’s best views 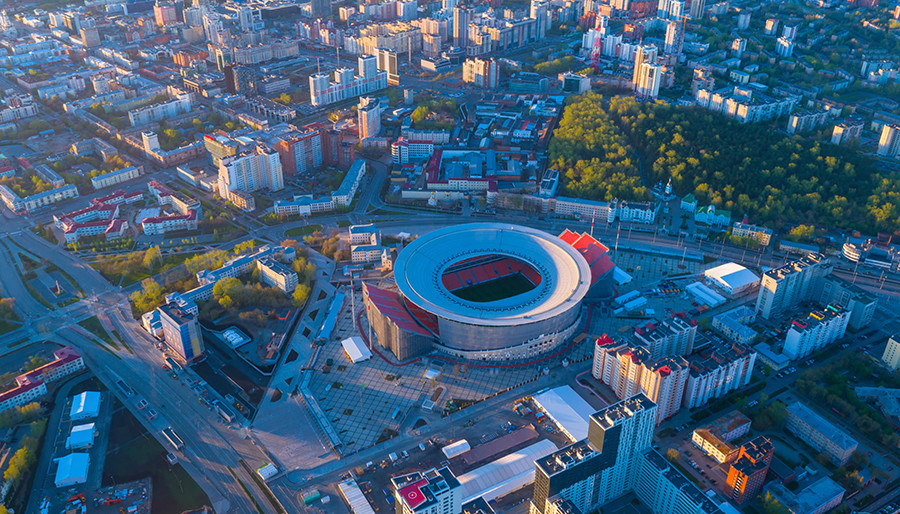 Perhaps the most architecturally unique location on the list, FC Ural’s immense, intimidating ground has a curious external stand that sits awkwardly outside the main body of the stadium. Bizarrely, the authorities rebuilt the rest of the stadium’s exterior (first opened in 1957) in an attempt to increase the venue’s capacity from 20,000 to 35,000 in five years, but decided to leave the outlying temporary stand as it is. This attracted some ridicule on social media, but also provided some unique photographs of the stadium.

Just east of the city center, the Ekaterinburg Arena is best reached on foot. 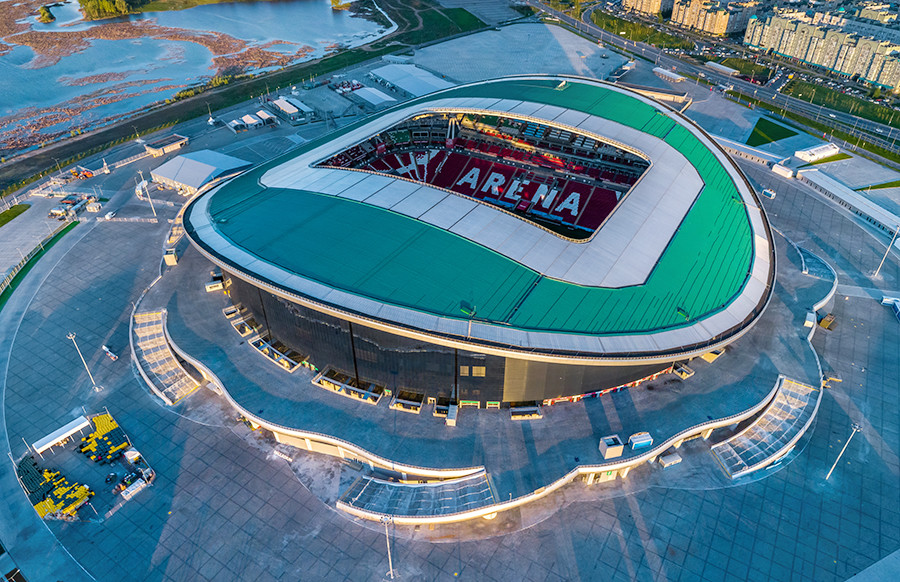 The 45,000-seat home of FC Rubin Kazan was unveiled in 2013, boasting a modern arced dome and a stylish riverside location. It’s also home to the world’s biggest outdoor screen – an impressive 4,000-square meter HD display. Although more accustomed to athletics and often failing to fill the ground during Rubin home matches, the ground’s high, sloping stands are begging for an intense atmosphere to fill them. The Kazan Arena will also be one of the busier World Cup stadiums, set to host six matches (including one quarter final).

Unfortunately, the Kazan metro doesn’t stop near the Kazan Arena – it’s best to access the ground via tram, with trams 5 and 6 stopping there. Shuttles will also be available from Kazan Railway Station. 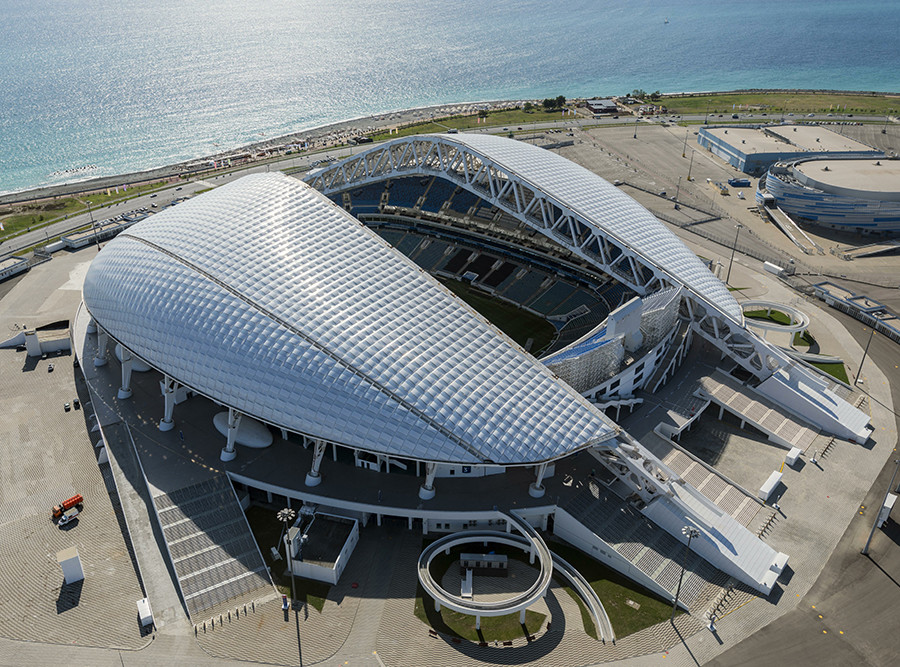 Placed right between the Black Sea shore and the Krasnaya Polyana Mountains, this incredible two-part, clam-shaped dome is a true sight. However, since it was purpose-built for the 2014 Winter Olympics and Paralympics, the World Cup will be the first football action seen in the Fisht for a long time: Local outfit FC Zhemchuzhina-Sochi went into liquidation in 2013, right before the stadium’s opening. Not to worry, though: The 48,000-seat ground has previously hosted the Olympic Opening Ceremony and the Confederations Cup in fine fashion, and will be ready to go with a crazy light display on the exterior.

Technically lying in the locality of Adler, the stadium’s Imeretinsky Kurort (Olympic Park) station connects directly with Sochi’s railway stations in the airport and city center. It can also be reached from Adler train station on the No. 57 bus. 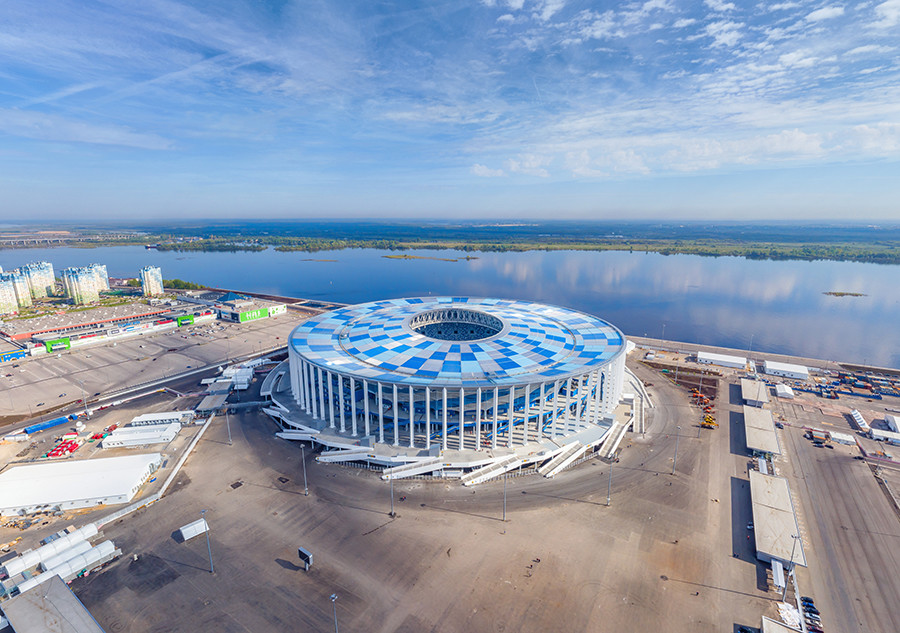 The previous, 18-000 seat Lokomotiv Stadium did not cut the mustard as Nizhny Novgorod’s principal World Cup venue, and has been put in the shadow of this recently-built masterpiece, hosting 45,000. The grandiose columns and narrow rooftop make the ground one of the tournament’s most striking – and that’s not even bringing its luminous, transparent façade into the equation. It also boasts a remarkable view over the Aleksandr Nevsky Cathedral, which might be worth popping into to pray for your team’s victory (if you’re of the praying sort).

Located just two kilometers from the Moskovsky railway station, the stadium is within walking distance of most city center locations. Alternatively, it is a 15 minute walk from the new Strelka metro station, and is also accessible from Moskovskaya metro station. Alternatively, you can get bus routes 7, 41, 57, 66, or 69 to the Mikrorayon Sedmoye Nebo stop, which will drop you off just 500 meters from the ground. 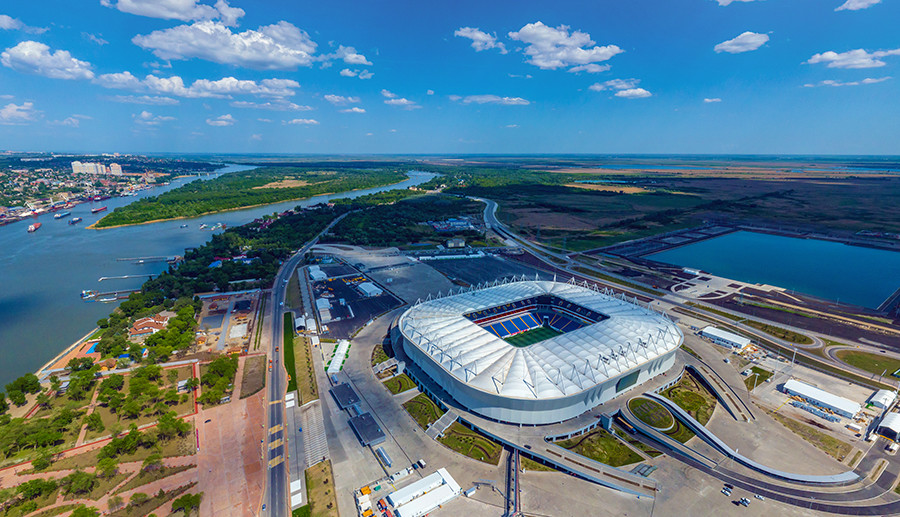 Allegedly inspired by the movements of the nearby Don River and the region’s Kurgan mountains, this attractive stadium boasts a roof which is strangely reminiscent of the Sydney Opera House. After a series of false starts, the arena finally opened its doors in December 2017 with a temporary capacity of 45,000 -  after the World Cup, it will be scaled down to house 25,000 for the “Russian Leicester,” FC Rostov, who made a surprising title surge back in 2016.

This ground is also within walking distance of the city center – but if you don’t fancy the stroll, you can get to the nearby Voroshilovsky Prospekt tram stop via trams 1 and 4, or directly to the stadium on buses 39 or 516. 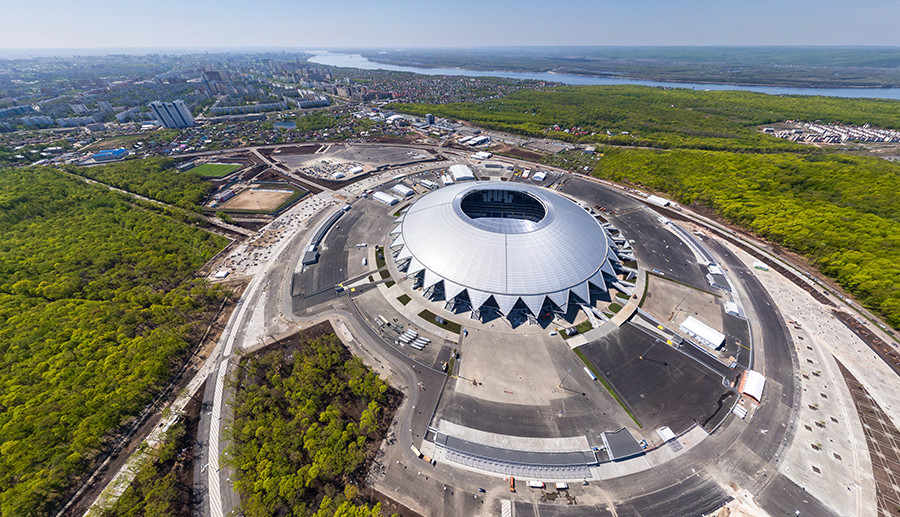 Samara, the home of the Soviet space program, has arrived at the World Cup with a characteristically futuristic stadium – a sort of discus-cum-panopticon that looks as though it may have come directly from outer space. This new 44,000-seat home of local side Krylia Sovetov was the subject of much controversy as a series of delays led to it being officially opened in April of this year – just under two months before the World Cup’s start date. Nonetheless, this two-tier ground is an undeniably pretty sight, and is set to play host to six matches this summer, including one quarter-final fixture.

As the most recently finished stadium, the Samara Arena is arguably the worst-connected to infrastructure. It can be reached by a recently-finished trolleybus, or alternatively on buses No. 1, 45, 51, 67, 110, or 410a. However, by far the most scenic route to the stadium is along the Volga River – boats depart from the city center and arrive at the stadium in about 20-30 minutes. 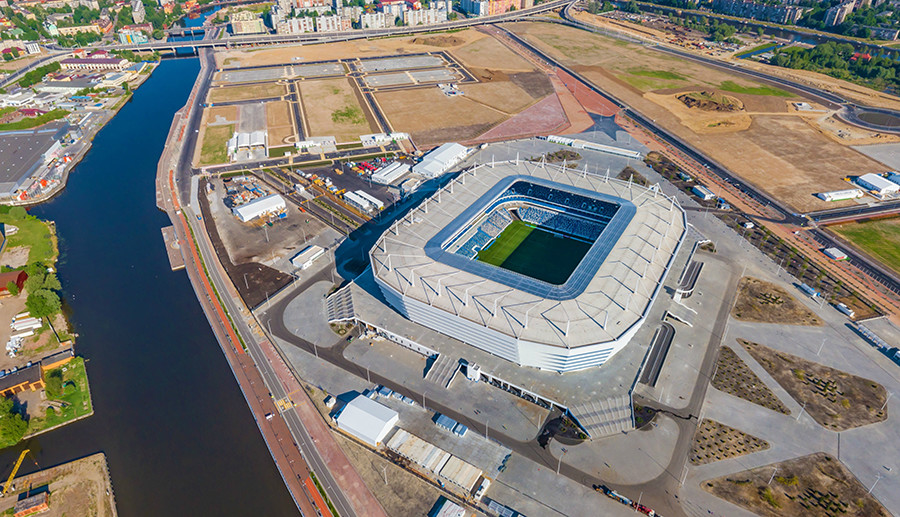 The tournament’s smallest ground can be found in the Kaliningrad exclave, playing host to just over 35,000 fans (even so, it will be scaled down to 25,000 after the tournament). Located on the relatively central and certainly picturesque Ostrovsky Island, this sleek silver and white structure is somewhat reminiscent of the Allianz Arena, and offers a pleasant view over the Pregolya River. Like the Samara Arena, this stadium only opened in April of this year.

The easiest way to get to the stadium is on foot, taking roughly 20 minutes from the central Konigsberg Cathedral. 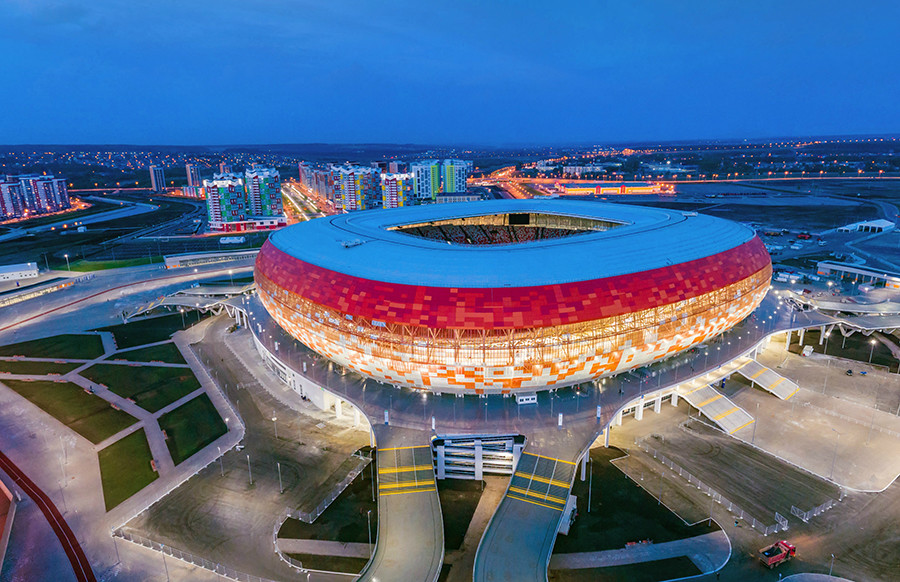 Saransk, Russia’s smallest World Cup host city, was granted a brand-new 45,000-seat ground for the occasion, which will be downscaled for local second-tier club FK Mordovia after the tournament. A neat, square nest, the stadium boasts a bright interior with an expansive overhead roof feature. While perhaps not the most happening host city, the arena is definitely a highlight.

One of the benefits of having a host city as small as Saransk is the stadium’s accessibility – the ground is less than a kilometer from the city’s centermost location, Sovietskaya Square. Alternatively, bus No. 44 also goes there. 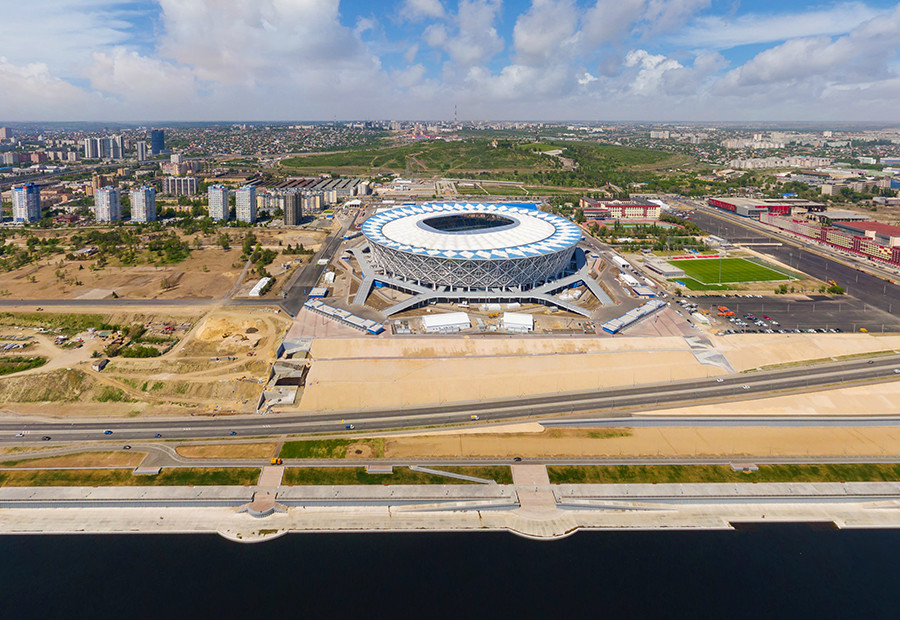 This photogenic nest is another brand-new arena Russia has built for itself after demolishing the former Central Stadium in Volgograd. Soon to be the home of Rotor Volgograd, it boasts a 45,000 capacity and cool meshed exterior, as well as a neat, cake-like roof. This makes the stadium light and well-aired. Despite a few unexploded bombs from the Battle of Stalingrad being found underneath the stadium in 2014, preparations have gone smoothly.

The ground is easily reached by tram, which goes through several city center locations straight to Central Stadium stop, right beside the arena.