11 places in Moscow that teleport you back to the USSR 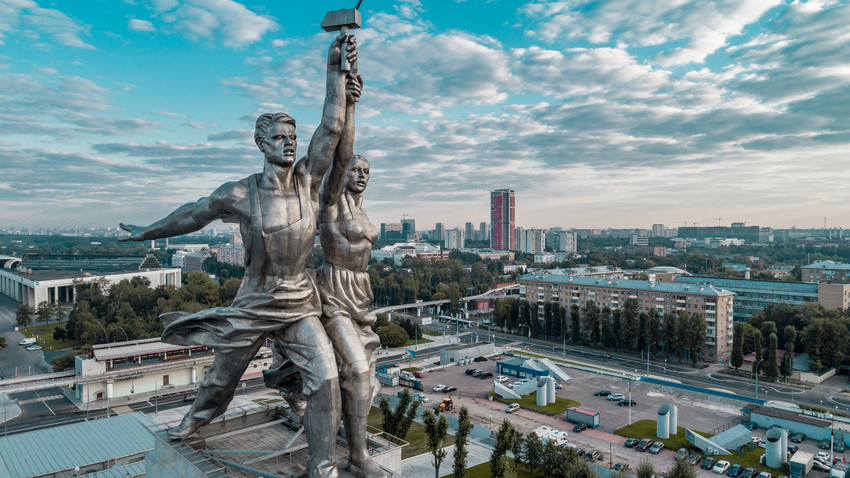 Dmitry Serebryakov/TASS
The bygone Soviet era has left behind a rich legacy. However, finding it is becoming increasingly more difficult, especially in fast-changing Moscow. But there are still places where one can find oneself in a time machine.

The hotel's history dates back to the late 1940s: it was built on order from Joseph Stalin. Later, his youngest son, Vasily Stalin, lived there on a permanent basis, while Nikita Khrushchev, who replaced Stalin as the Soviet leader, would receive foreign delegations there. 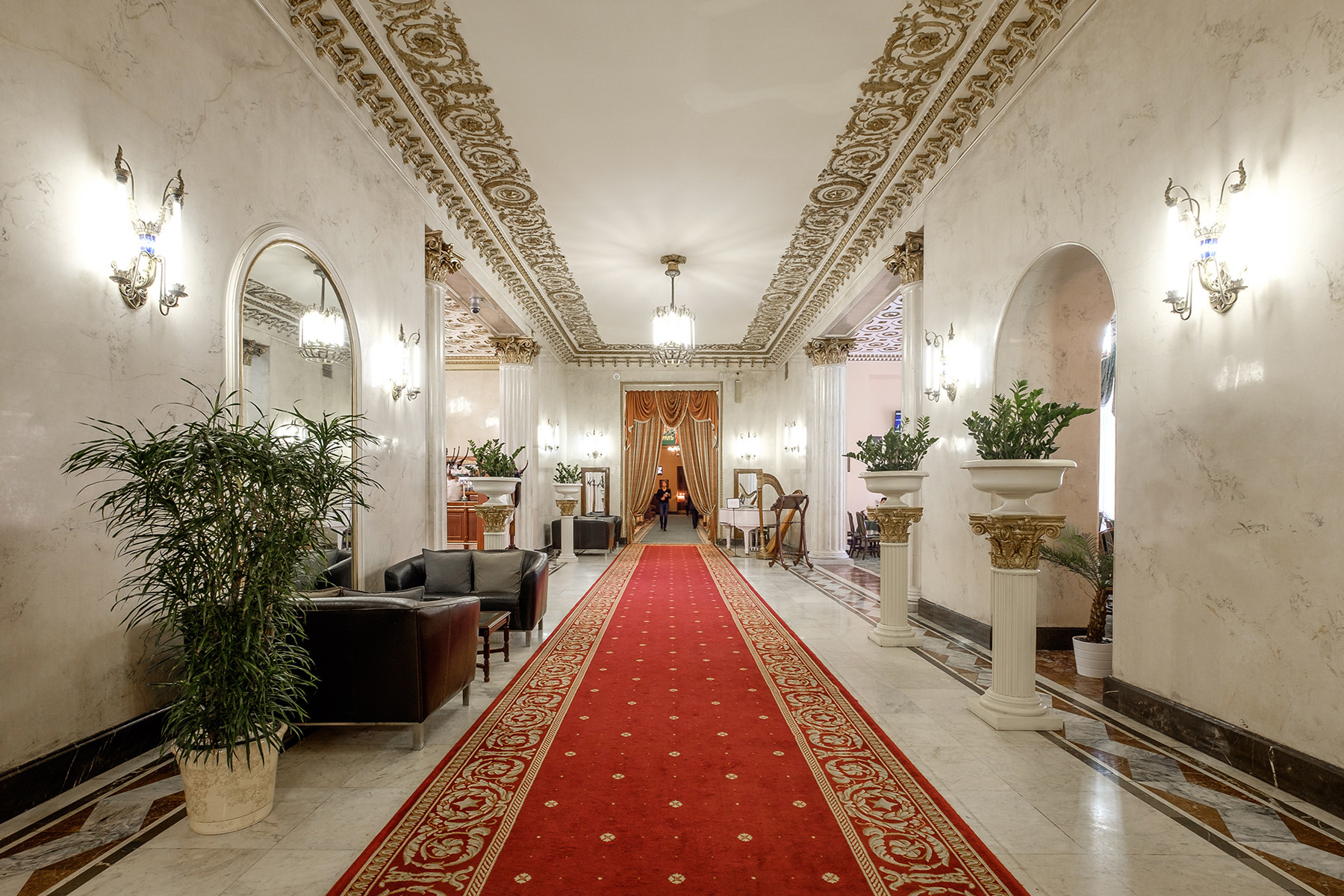 These days the historical apartment of the Stalin family can be booked for 21,600 rubles ($335) a night, along with other, cheaper, but no less 'Soviet', rooms: the décor and furniture are all from that era; however the amenities have been upgraded to meet modern standards. 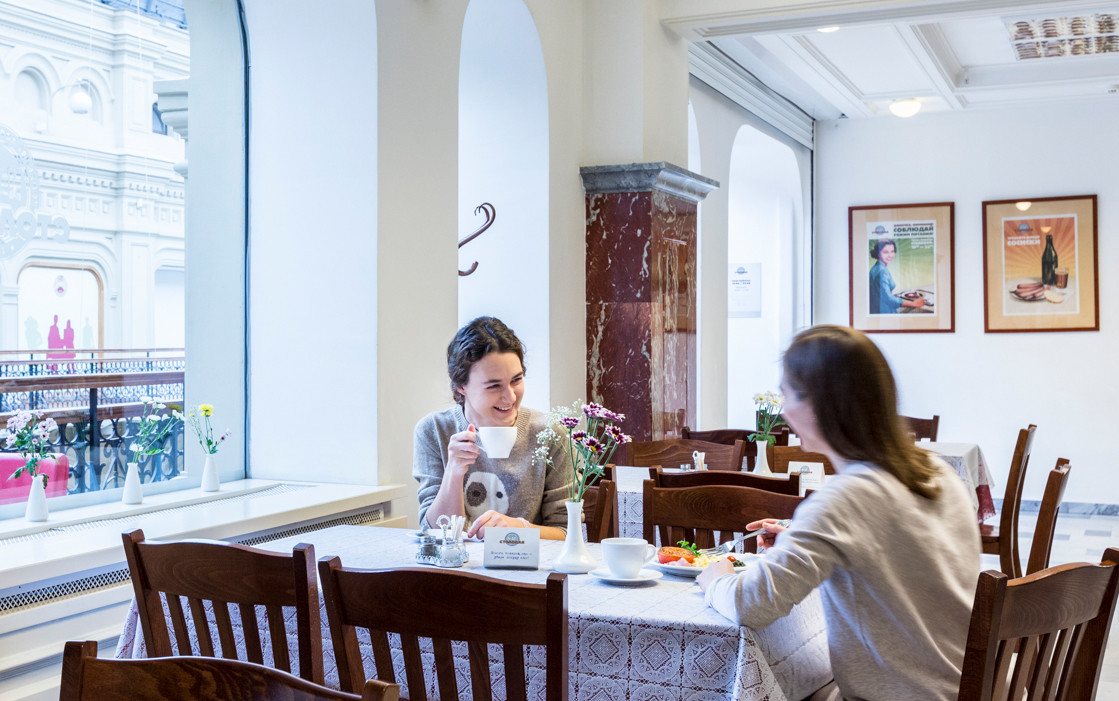 Canteens were a widespread form of catering in Soviet times. The format, which offers cheap home-style food, is still popular in modern Russia, but there are few places that seek to preserve the Soviet-era menu and 'spirit'. One of the places that does this is the canteen at the GUM department store by the Red Square. It has everything: Soviet posters, aluminum forks, Vitamin & Olivier salads, soda fountains, and of course, ‘Moskovsky’ borscht! 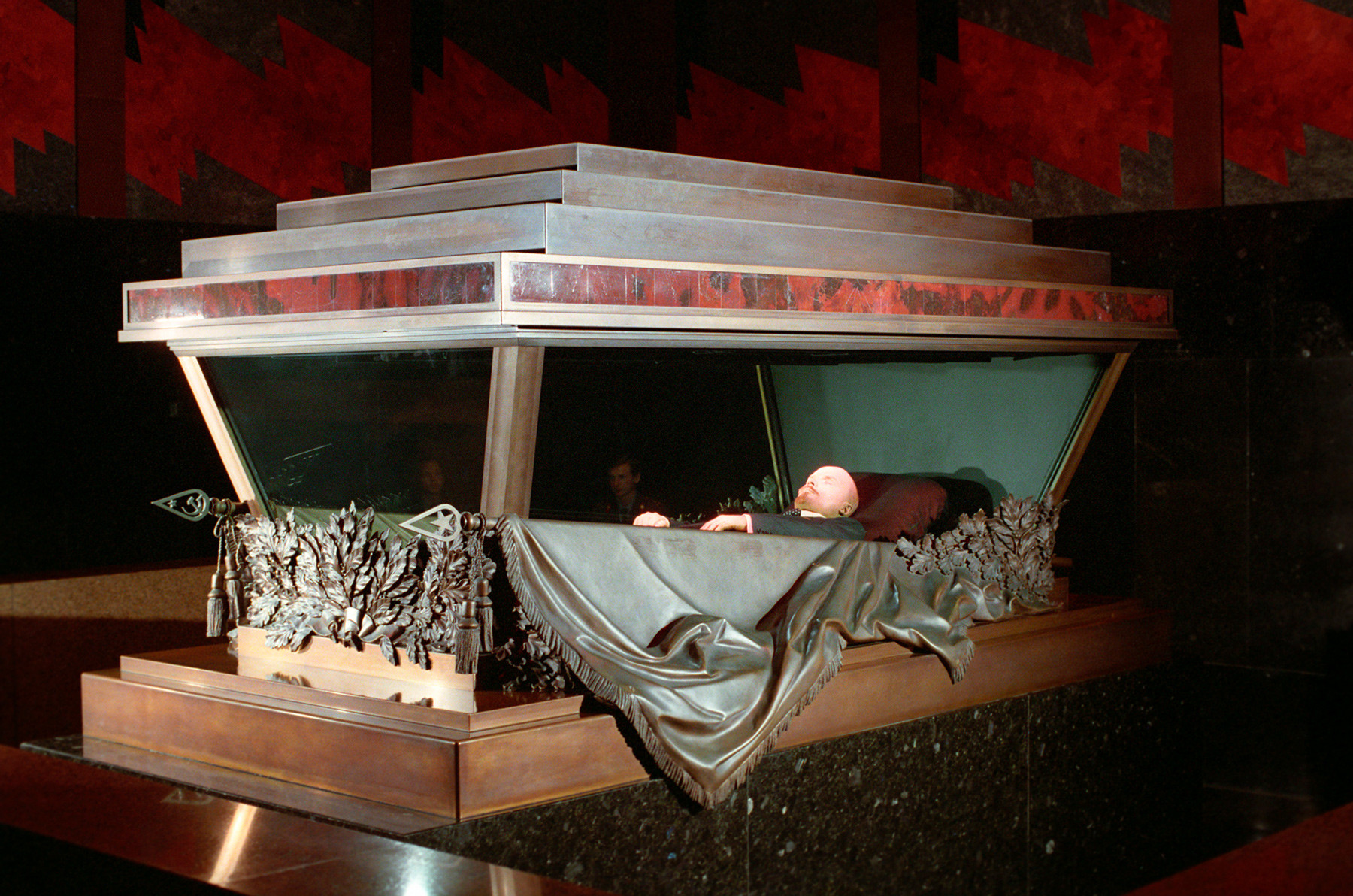 This is a sacred place for all fans of the Soviet Union. The unburied body of the communist leader is still on display in the heart of the capital, on the Red Square, and anyone can visit the mausoleum (which is free of charge) and look at the embalmed Soviet leader (but no photos allowed!). 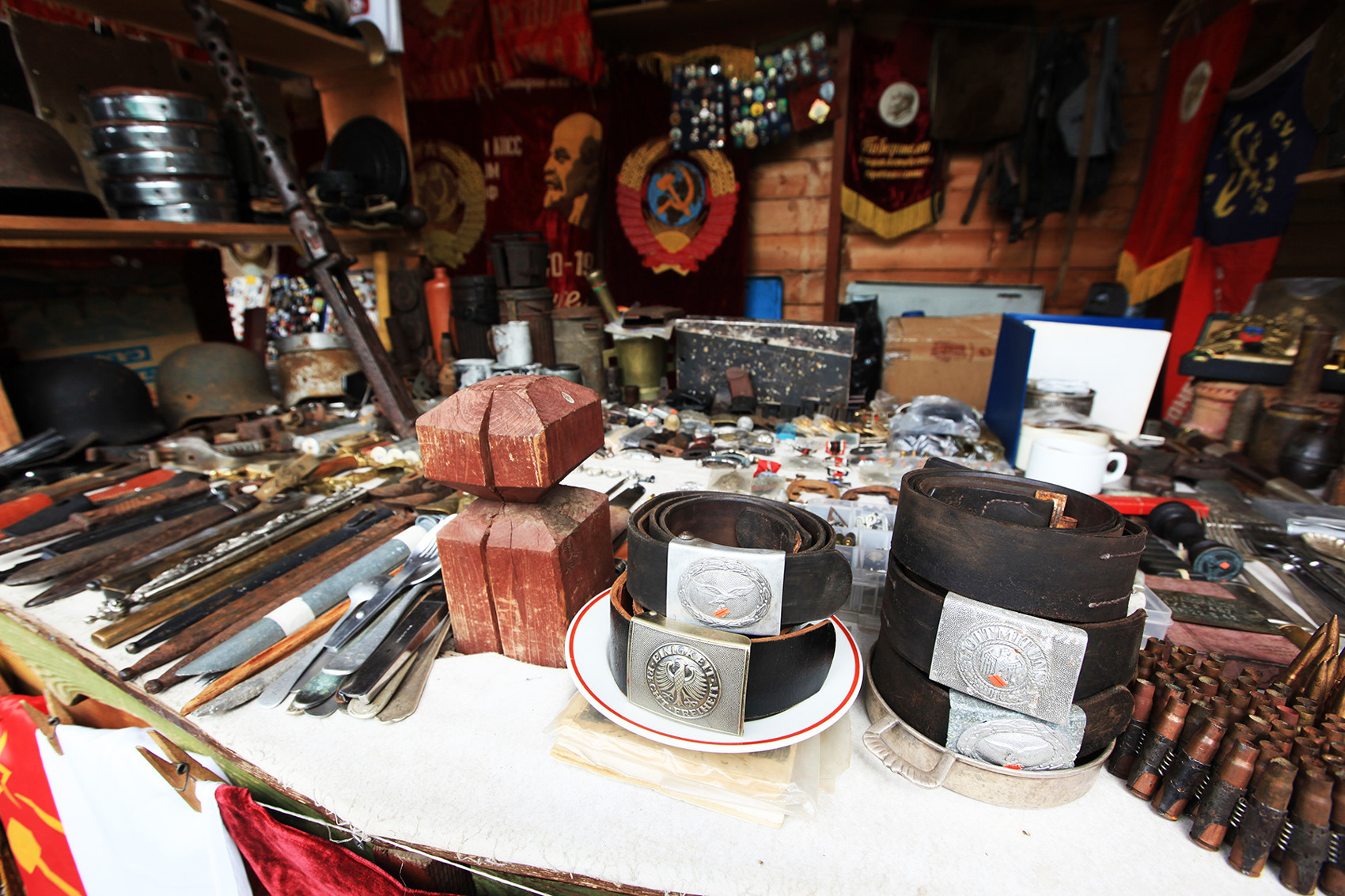 This giant flea market is situated on the territory of the Izmailovo Kremlin. The place looks like a medieval Kremlin, with a fitting church and surrounding street food stalls. In fact, none of this has anything to do with any historical past. However, in the midst of this tourist ‘kitsch’ it is possible to buy some real artifacts, like porcelain figurines and sugar bowls that could be found in every Soviet apartment, vintage cameras, gramophones – and even disgusting, but legendary, Belomor cigarettes! 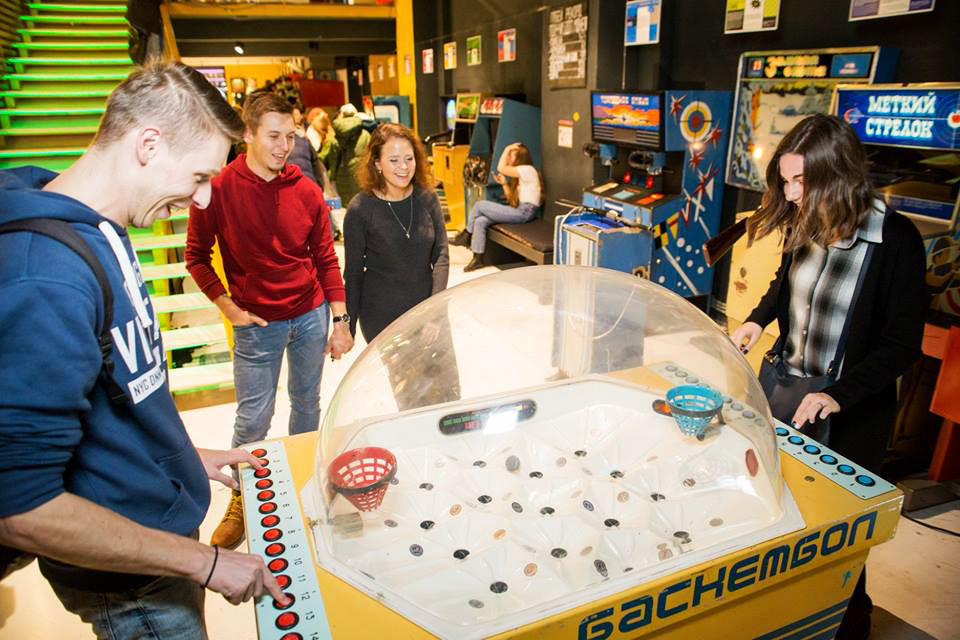 The museum has 40 types of authentic arcade machines from the Soviet Union, most of which are still in working order. In fact, they aren’t just on display – you can play them, too! The various games are relatively primitive (after all, these are vintage mechanisms!), but they do have a certain charm. See if you can find and play the ‘Soviet’ Pac-Man!

The museum is hidden within the Kuznetsky Most street and shares its space with a hip Moscow burger chain. 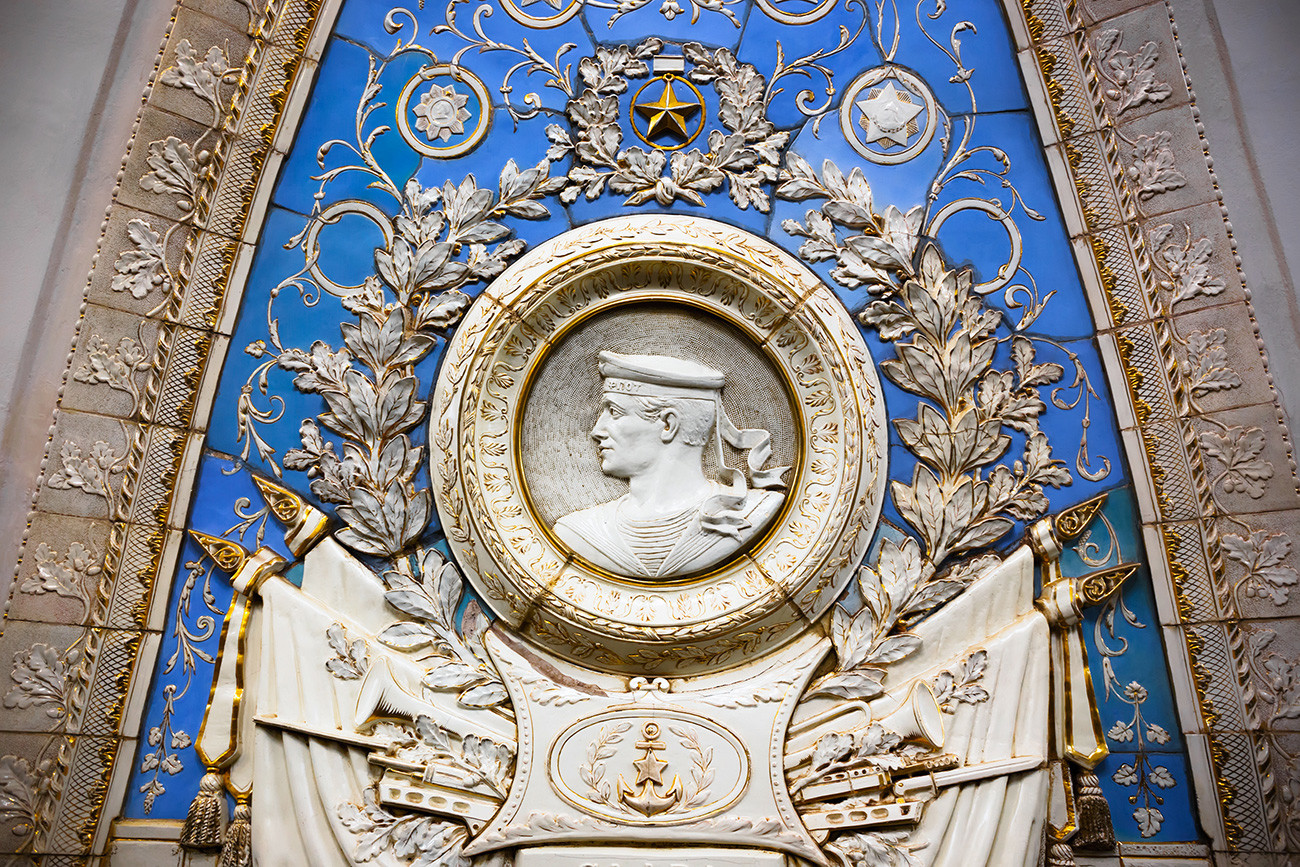 The Moscow Metro is a living museum under the Russian capital. Many stations were built more than half a century ago. Perhaps some of the most imposing one are located on the Circle Line. They were decorated by leading Soviet artists and sculptors to showcase the might and greatness of the Soviet Union. Mosaics, arches, stucco, and statues in the Stalinist architecture style are all still here. Our guide to the most impressive stations on the Circle Line can be found here! 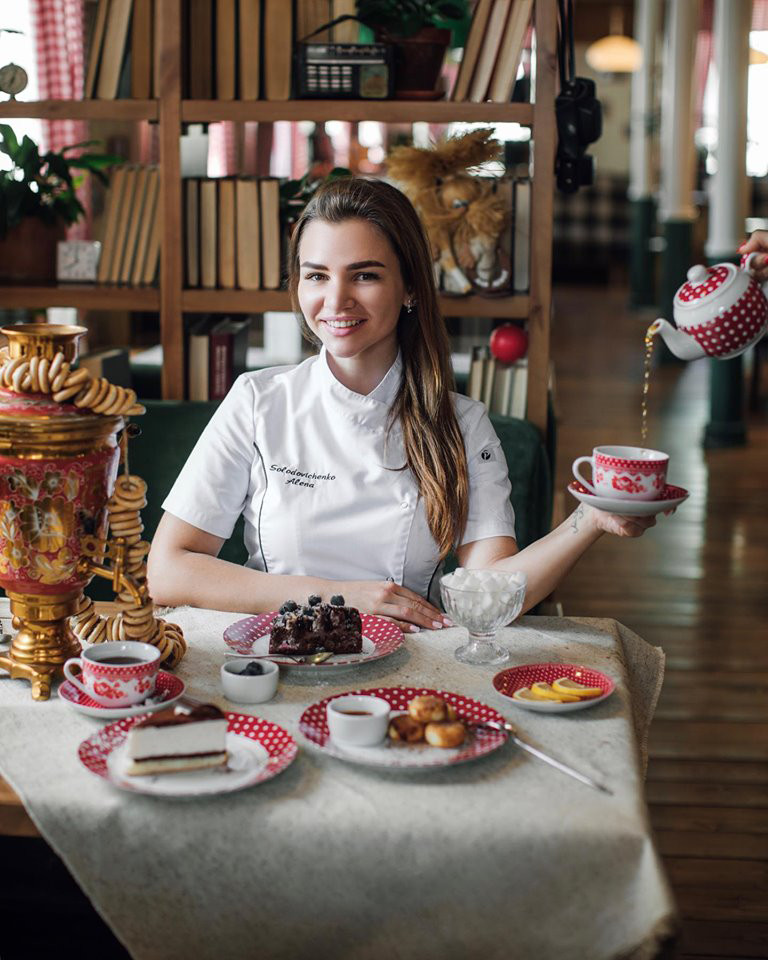 This restaurant chain is named after a classic Soviet dish – vareniki (dumplings) – but it didn’t exist during Soviet times. However, the owners of Varenichnaya No. 1 realized that this was a great business strategy –turning their restaurant into a typical Soviet apartment. Once inside, you are surrounded by Soviet 'antiques': drink glasses, chandeliers, napkin holders, Muzak of Soviet pop classics and, of course, the dishes on the menu – there are over 20 kinds of dumplings (vareniki) on offer, on top of a variety of other Soviet dishes. 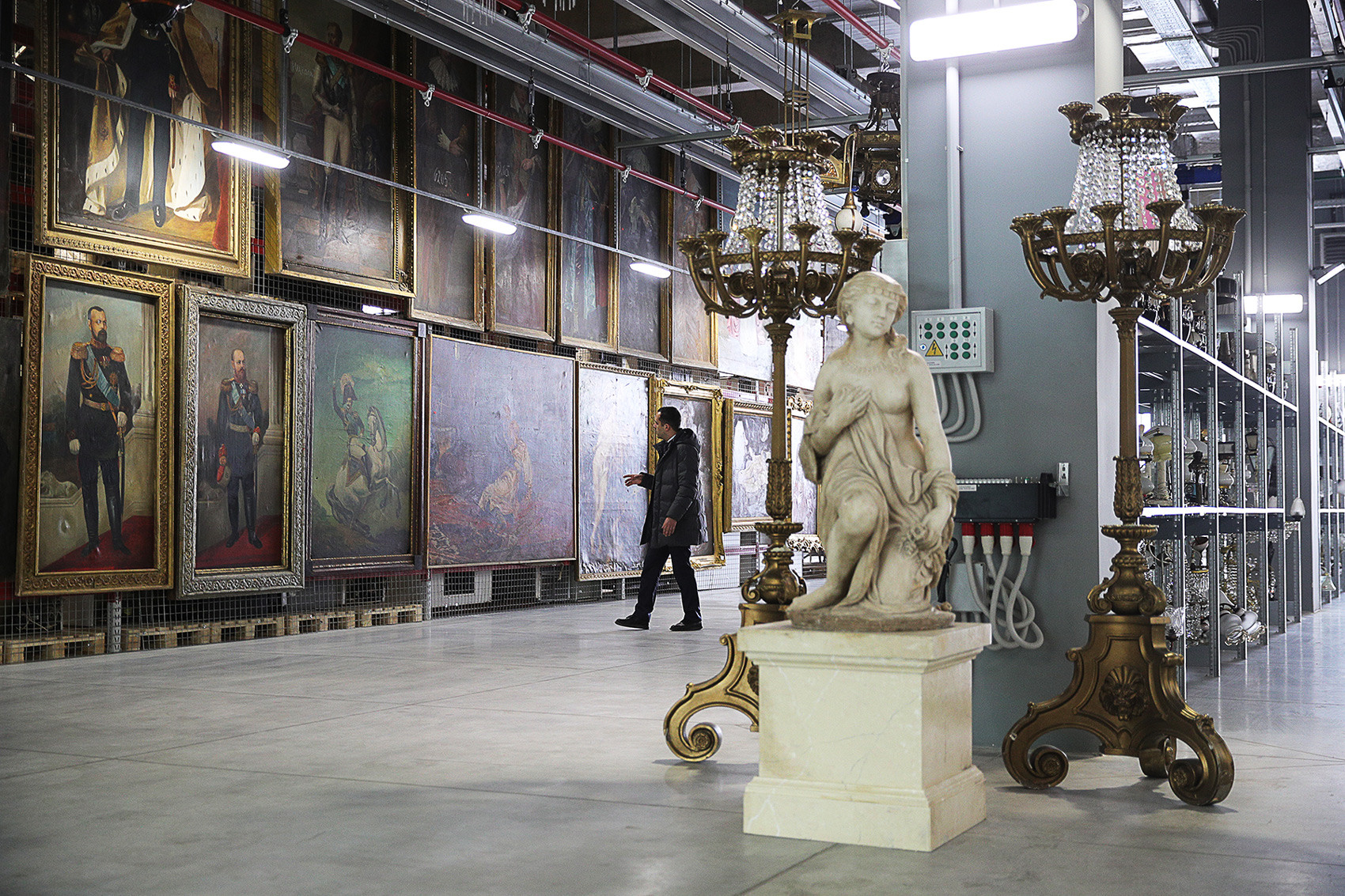 For nearly 100 years, the Mosfilm film studio has been considered the Soviet Hollywood. More than 2,500 films have been shot here, including masterpieces by Sergei Eisenstein and Andrei Tarkovsky. Today, it is a collection of 15 huge locations, which include thousands of sets, a film archive and numerous screening rooms. You can explore the Mosfilm studios by buying a ticket for a group tour. 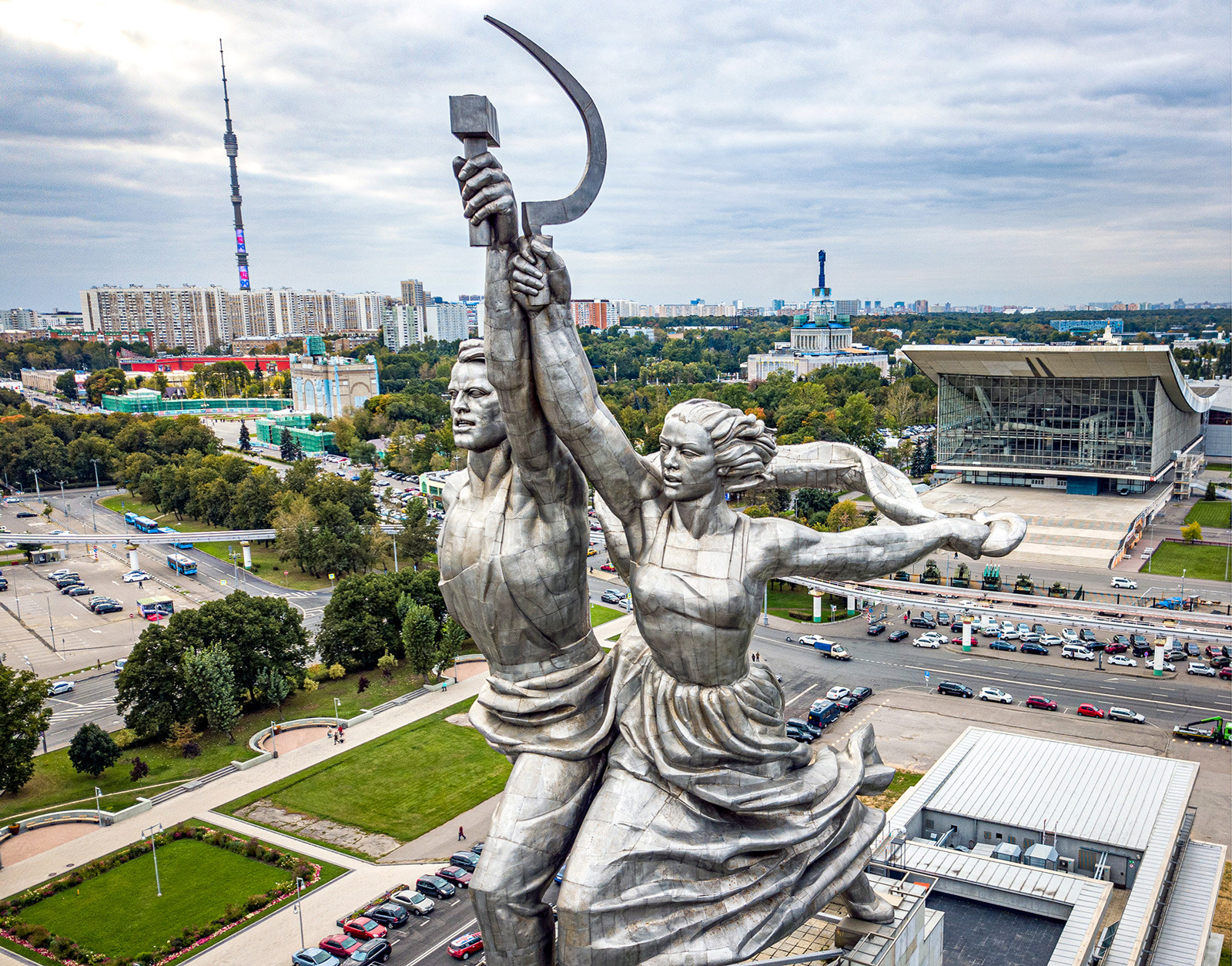 Mosfilm’s logo - the famous Worker and Kolkhoz Woman sculpture by Vera Mukhina - still stands at VDNKh, the Exhibition of Achievements of National Economy exposition center. The site was first opened in 1939 as the All-Union Agricultural Exhibition.

Decades later, the VDNKh fountains and pavilions are still considered among the most important architectural monuments of the era, along with the iconic Seven Sisters skyscrapers. They have recently been refurbished and now house many interesting artifacts, from a modern multimedia center to various exhibitions. It is the largest exposition, museum and recreational complex in the world, one of the most popular public spaces of the capital city of Russia. Each year, it is visited by about 25 million people. 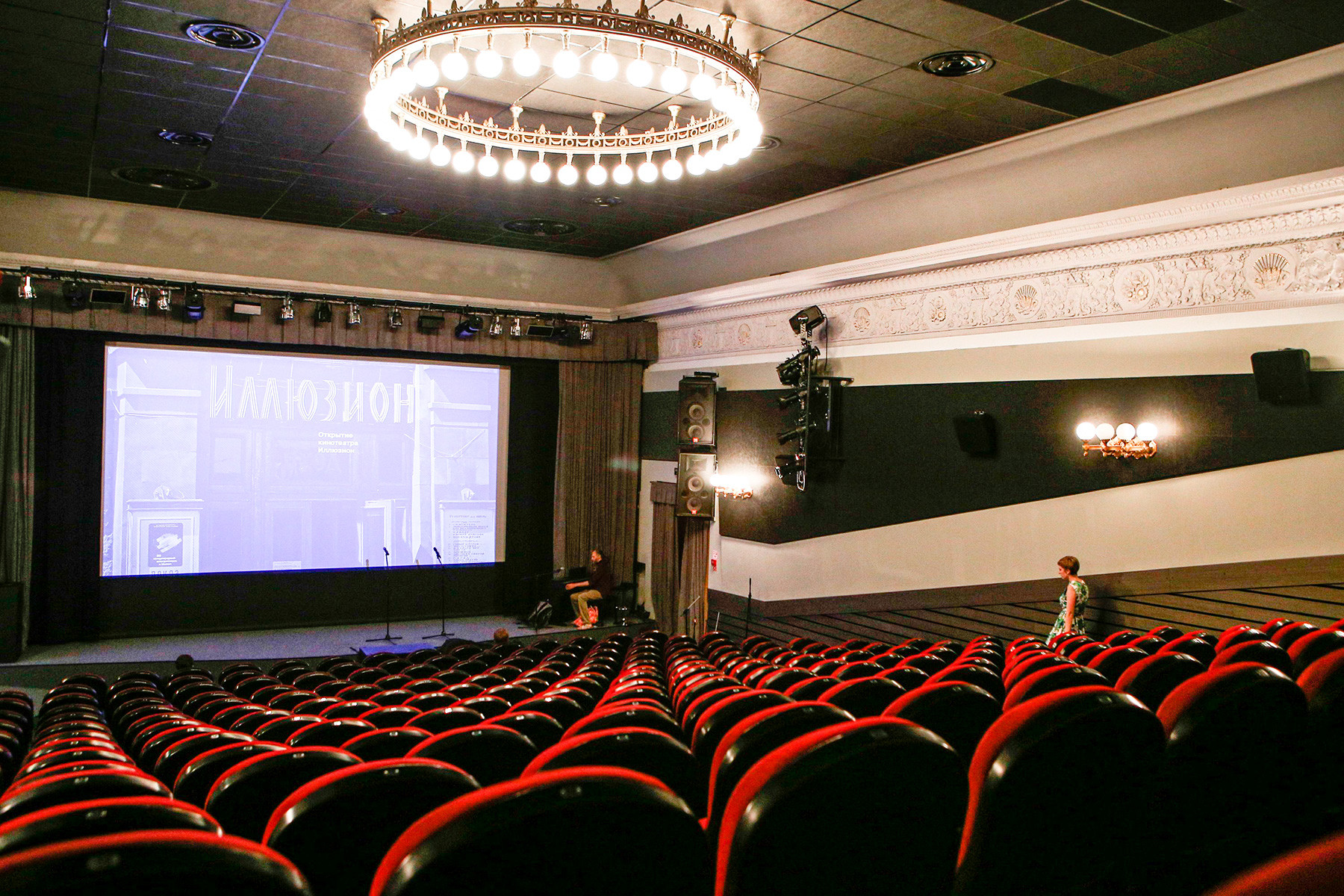 A movie theater opened in the residential skyscraper in Kotelnicheskaya Embankment, one of the Seven Sisters buildings, in 1966. At the time, it was an important place on Moscow's culture map. It was also the only one featuring movies that hadn’t passed a special Soviet art commission. Because of this, it was constantly in danger of closing, but the well-known residents of the home were always saving it.

These days, it is but a fragment of a past era, but, nevertheless, is trying to remain relevant.

In 2018, the Illuzion re-opened after extensive refurbishment. It is one of the few places in Moscow where you can watch not only modern art-house cinema on a big screen, but also Soviet and foreign classics, as well as old and rare films from the State Film Fund of Russia. You can catch a Tarkovsky flick, the Star Wars saga or even catch the Bertolucci ‘season’. And for you movie aficionados out there: some screenings are in the original language with subtitles! 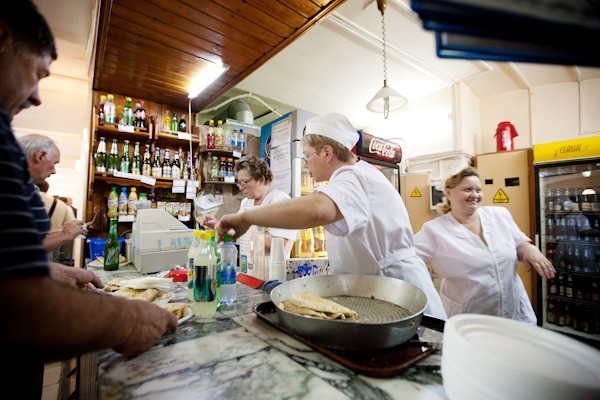 This is Moscow's best-known place for chebureks (a deep-fried turnover with a filling). It has remained unchanged since the 1960s: it’s still a cramped hall with hardly ever any seats available and a menu which consists exclusively of chebureks with all kinds of fillings, as well as beer and drinks at low prices.

The place is atmospheric, to put it mildly, but to a foreigner it may well fall under the 'shock tourism' category – Druzhba (which means ‘friendship’) does not strive to be a tourist attraction. Just like in previous decades, the Cheburek House is a place where locals come to eat and drink. It has its regulars, the so-called cheburek contingent, who can spend a whole evening quietly drinking vodka in a corner. But don’t worry, there are also security guards on duty here!