5 cities in Russia that highlight its rich ethnic diversity 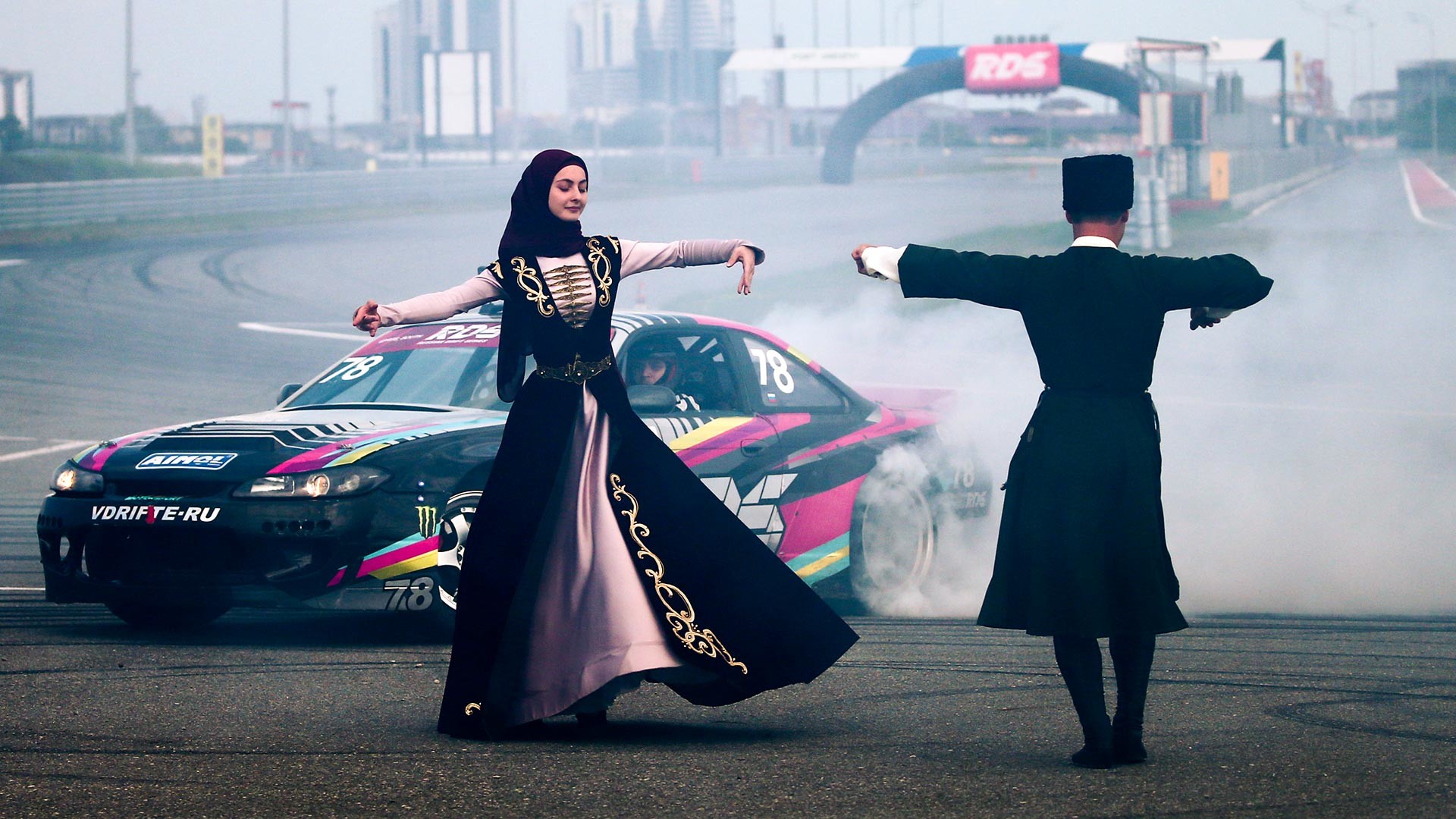 Yelena Afonina/TASS
Buddhist temples, ancient fortresses and a city that does not sell alcohol—Russia has all these and more.

Russia is a richly multicultural country that is home to almost 200 different ethnicities. Many regions have preserved their traditional cultures and languages, and cities in these regions are full of local character and strikingly different from other places in Russia. 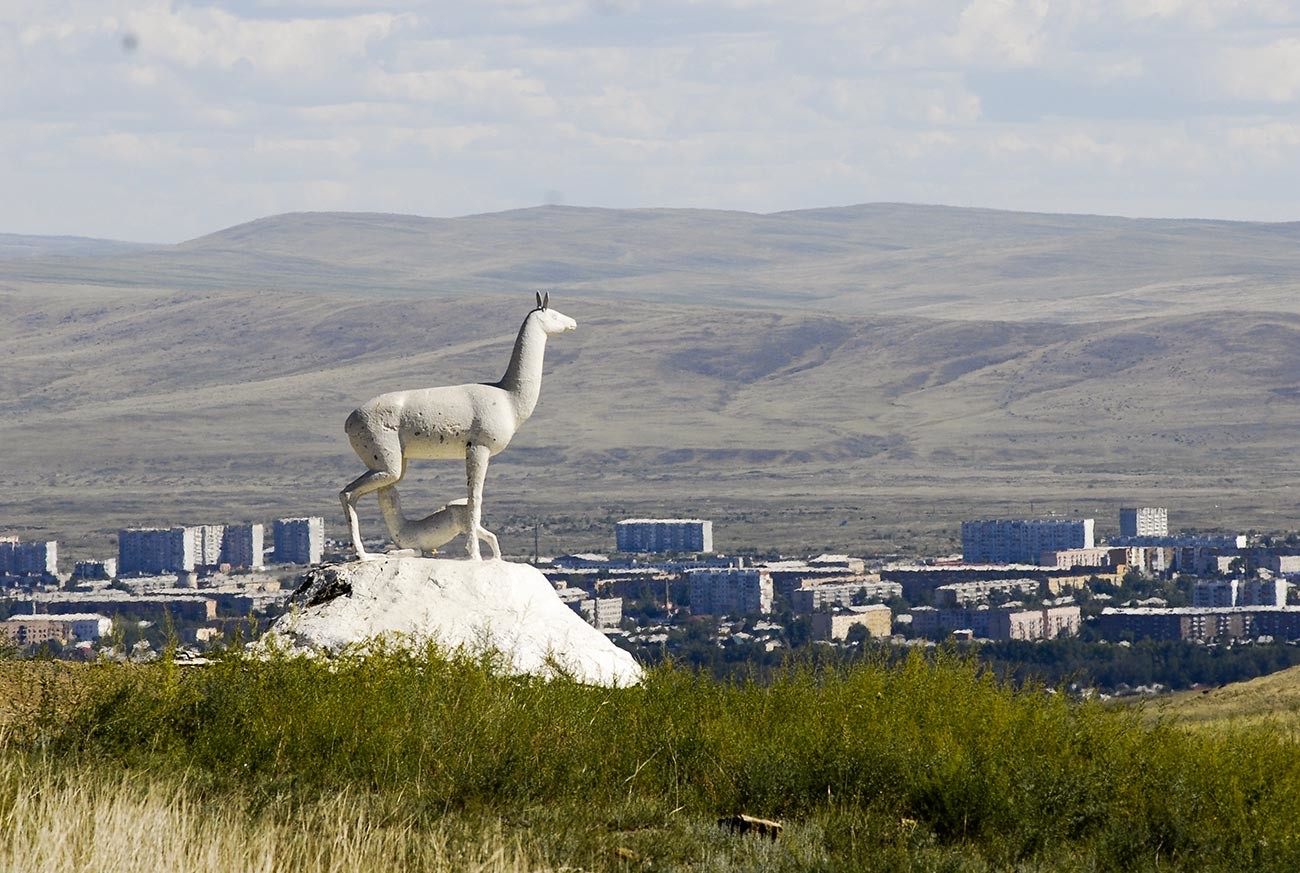 At entrance to Kyzyl.

Tyva, or Tuva, is a small republic in the south of Siberia that is known as the birthplace of throat singing. Kyzyl (which in Tuvan means “red”) is the capital and the region's largest city. It has a population of almost 110,000 people, many of whom speak Tuvan, which is recognized as an official language in the republic along with Russian. There are media outlets (here is a news anchor wearing national dress) and theater productions in Tuvan. Sometimes even classics like Romeo and Juliet are translated and performed in Tuvan.

Kyzyl does not look like an ordinary Russian city. It has many unusual sculptures of epic folk heroes, Buddhist temples and a large prayer wheel that was a gift from Buddhist monks in an Indian monastery. 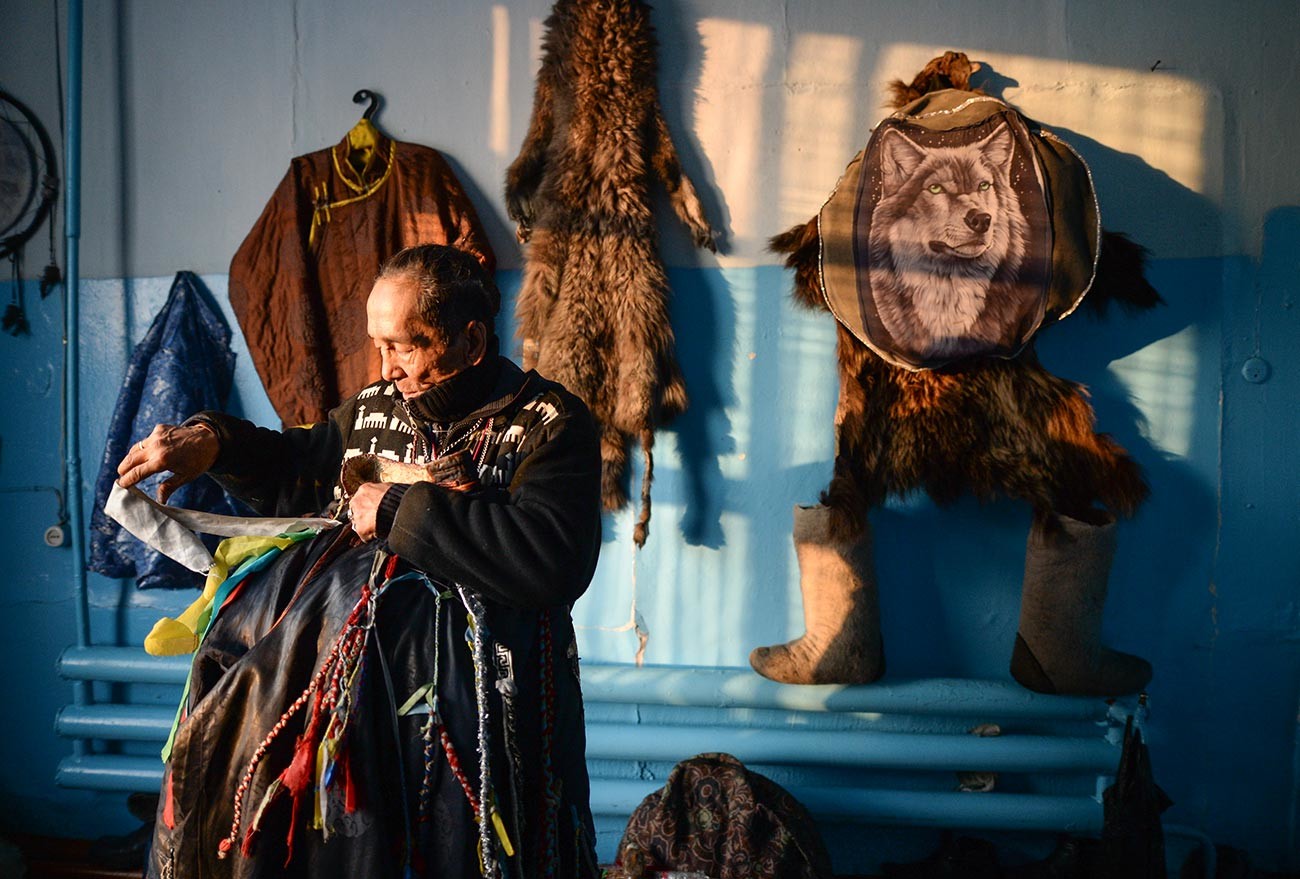 A shaman in Kyzyl.

“Traditions play an important part in the life of an average Tuvan: respect for elders, Asian modesty, reverence for nature,” says Dayan Dansurun, a photographer from Kyzyl. “As we are now approaching the national holiday of Shagaa, you can see people in the streets proudly wearing national clothes.” To celebrate the holiday, the city hosts folk music festivals, competitions in traditional sports like Tuvan archery and masterclasses in local crafts.

Although the traditional faiths in Tuva are Buddhism and shamanism, the Russian Orthodox Church is held in esteem as well. “Since childhood, I remember that on Easter day our family would always warmly congratulate our Russian neighbors on this holiday,” Dayan says. 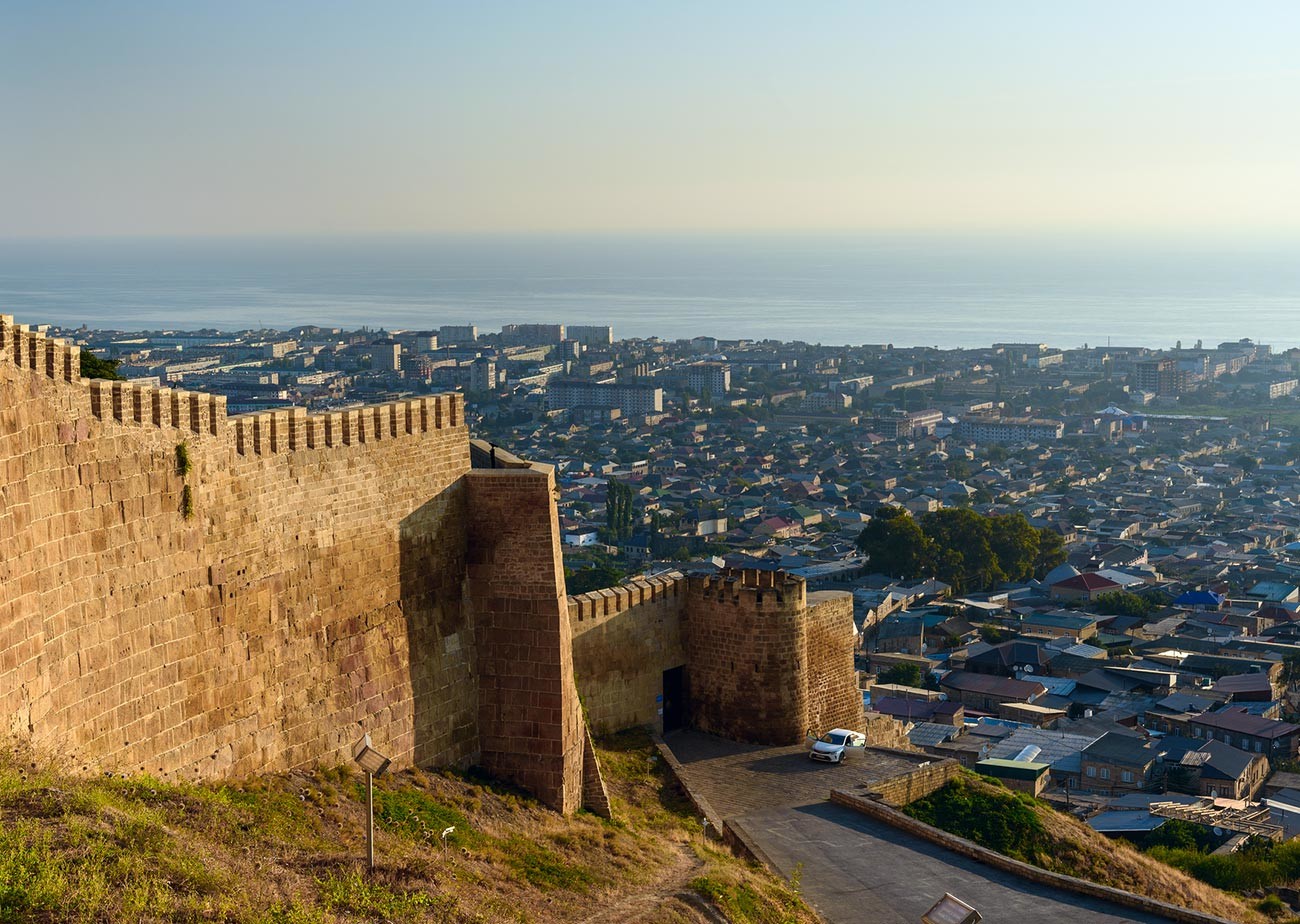 The ancient fortress in Derbent.

“Derbent is one of the oldest cities in Russia, so it cannot but differ from any other city,” says Margarita Samoylova, who moved here from Siberia for work. “Houses and streets do not look like the streets of my native city.”

The city of Derbent in Dagestan (in the North Caucasus) is indeed one of the most unusual cities in Russia. Firstly, it is more than 2,000 years old (this anniversary was in 2015). The city has an ancient Derbent fortress with the Juma mosque that dates back to the mid-8th century. Secondly, it is considered the most ethnically diverse city in Russia. With a population of just 125,000 people, Derbent has mosques (both Shiite and Sunni), Orthodox churches, and synagogues and hosts festivals of the many different peoples of Dagestan. 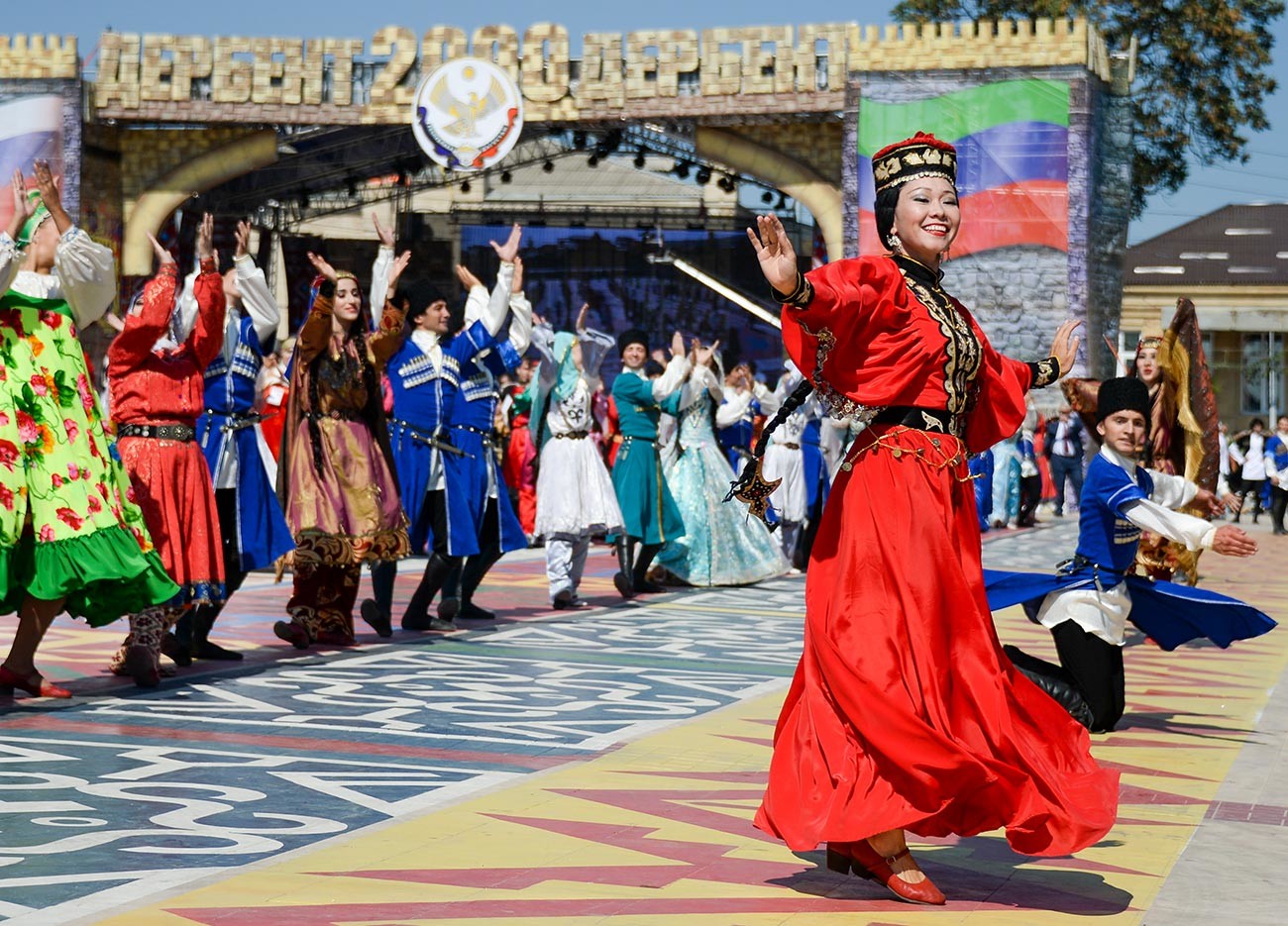 “There are dozens of nationalities living here,” says Margarita. “I have only come in contact with Lezghins and Avars so far. Between themselves they speak in their native tongues, but when they talk to me, they switch to Russian.” Where else can you encounter anything like this? 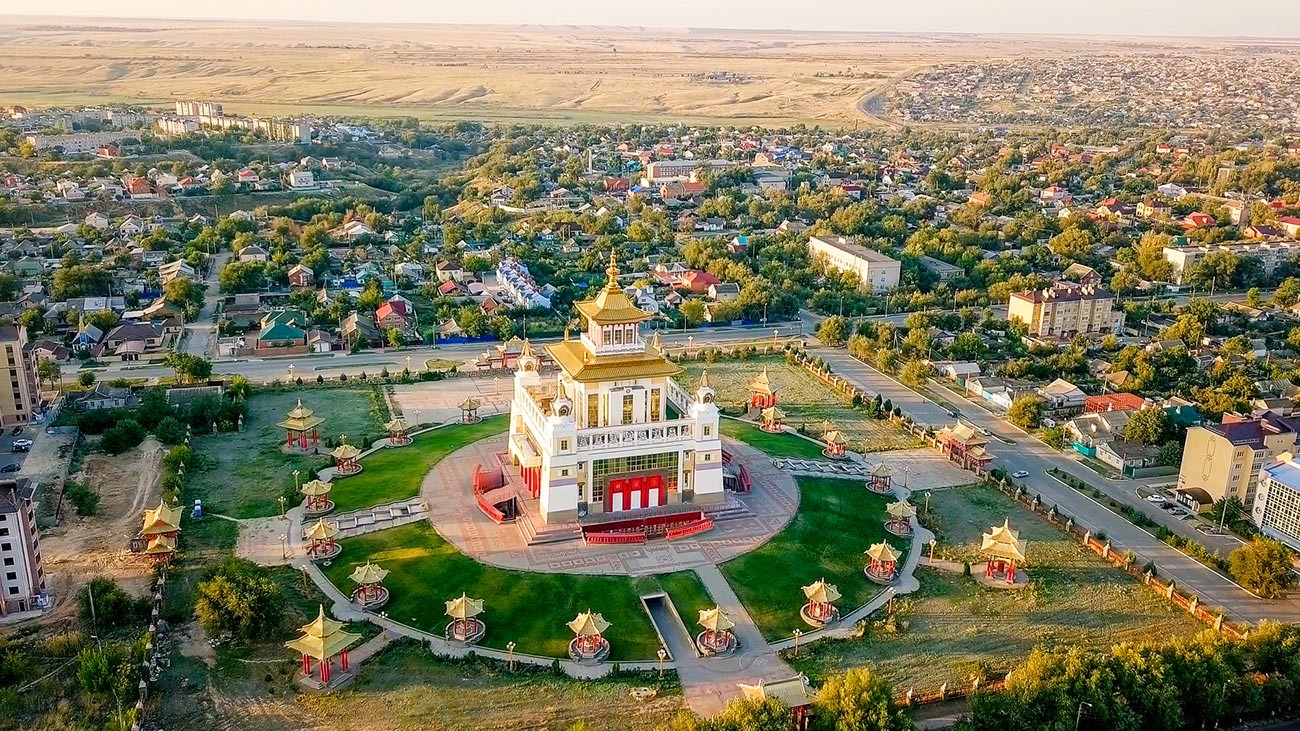 This small town sitting in the middle of the southern Russian steppes is a center of Buddhist culture and the country's chess capital. Two-thirds of the 100,000 people living here are ethnic Kalmyks. They are predominantly Buddhist, and so there are Buddhist temples both inside and around the city.

“These days a lot is being done to preserve the culture and heritage of the Kalmyk people,” says a local resident, Alan Makht. For example, Europe's biggest Buddhist temple, known as the Golden Abode of Buddha Shakyamuni, is located in Elista. It was built here in 2005. 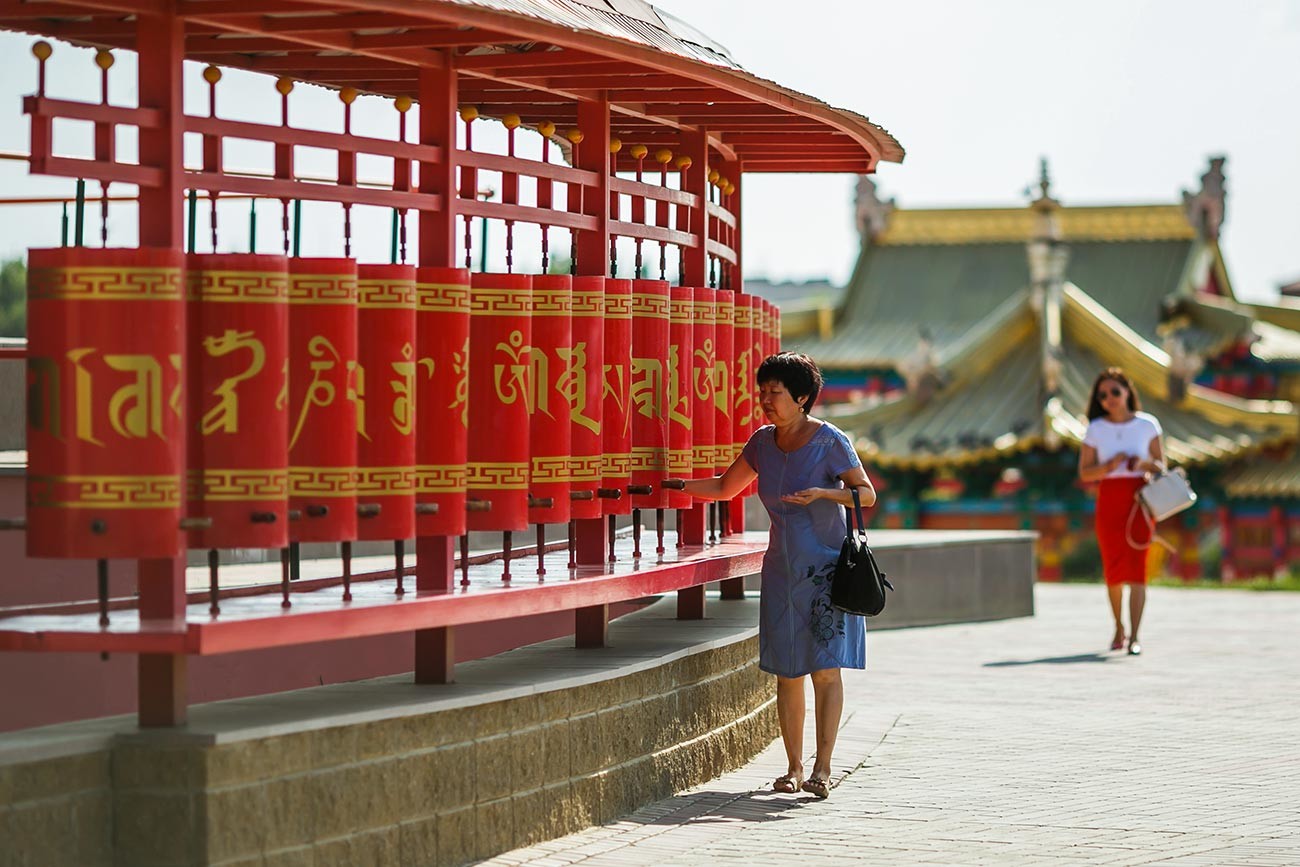 In 1997, Chess City was built to the southeast of the city to accommodate participants in the 1998 Chess Olympiad. Alan says this is one of his favorite places in the city. Every house in Chess City bears a chess-related name, such as Queen or White Rook. The floor in its main building, called the Chess Palace, looks like a chessboard—and can even be played on. 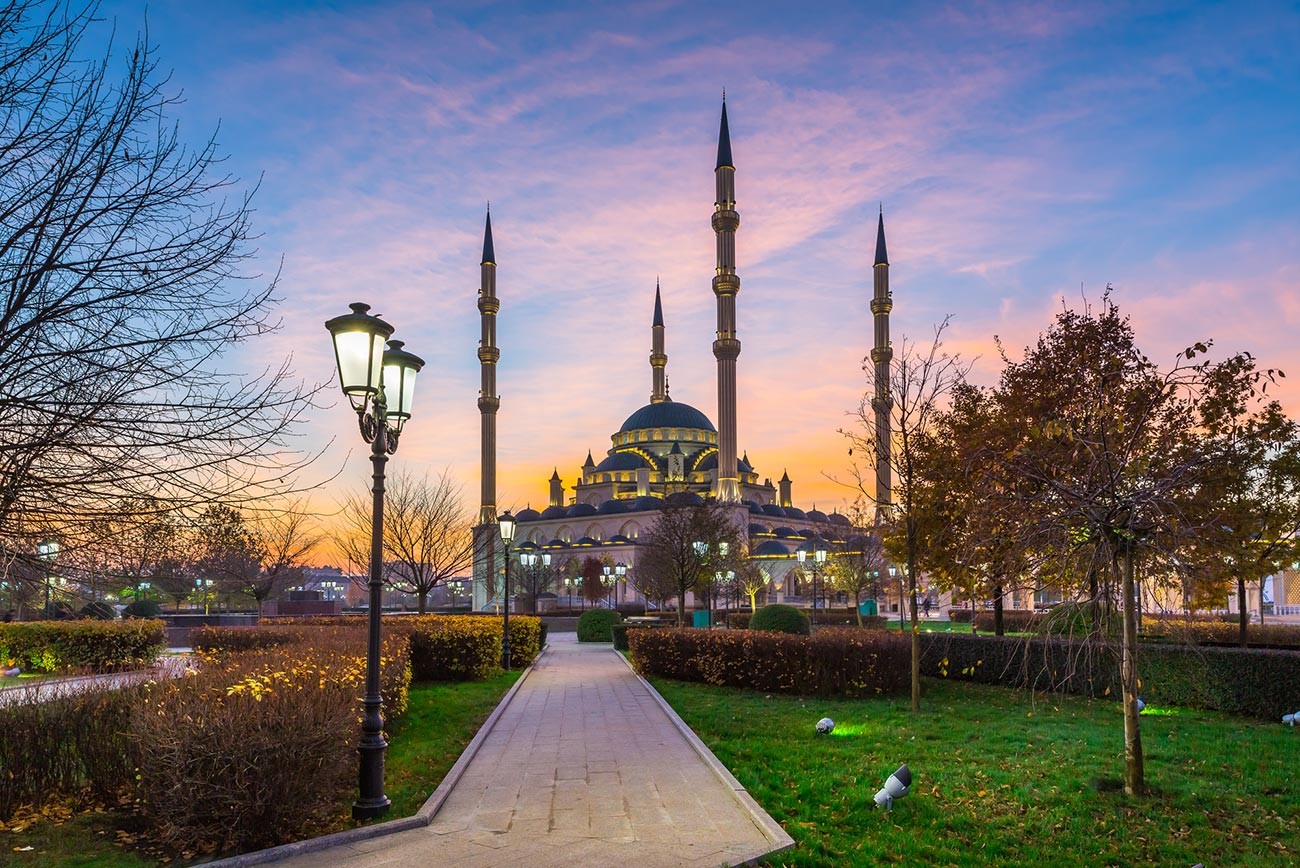 The Heart of Chechnya mosque.

Grozny is a modern metropolis with skyscrapers, shopping centers, wide avenues and a somewhat Middle Eastern feel. Women here cover their hair and wear long skirts. Smoking is frowned upon, so you will hardly ever see a person with a cigarette on the street. Alcohol is also strongly discouraged and is only sold for two hours in the morning from 8:00 to 10:00 am in large supermarkets and served in just one restaurant in the city during the evening.

There are no bars or nightclubs in the Chechen capital, but it does have a huge modern football stadium, many parks and theaters offering performances in both Russian and Chechen. 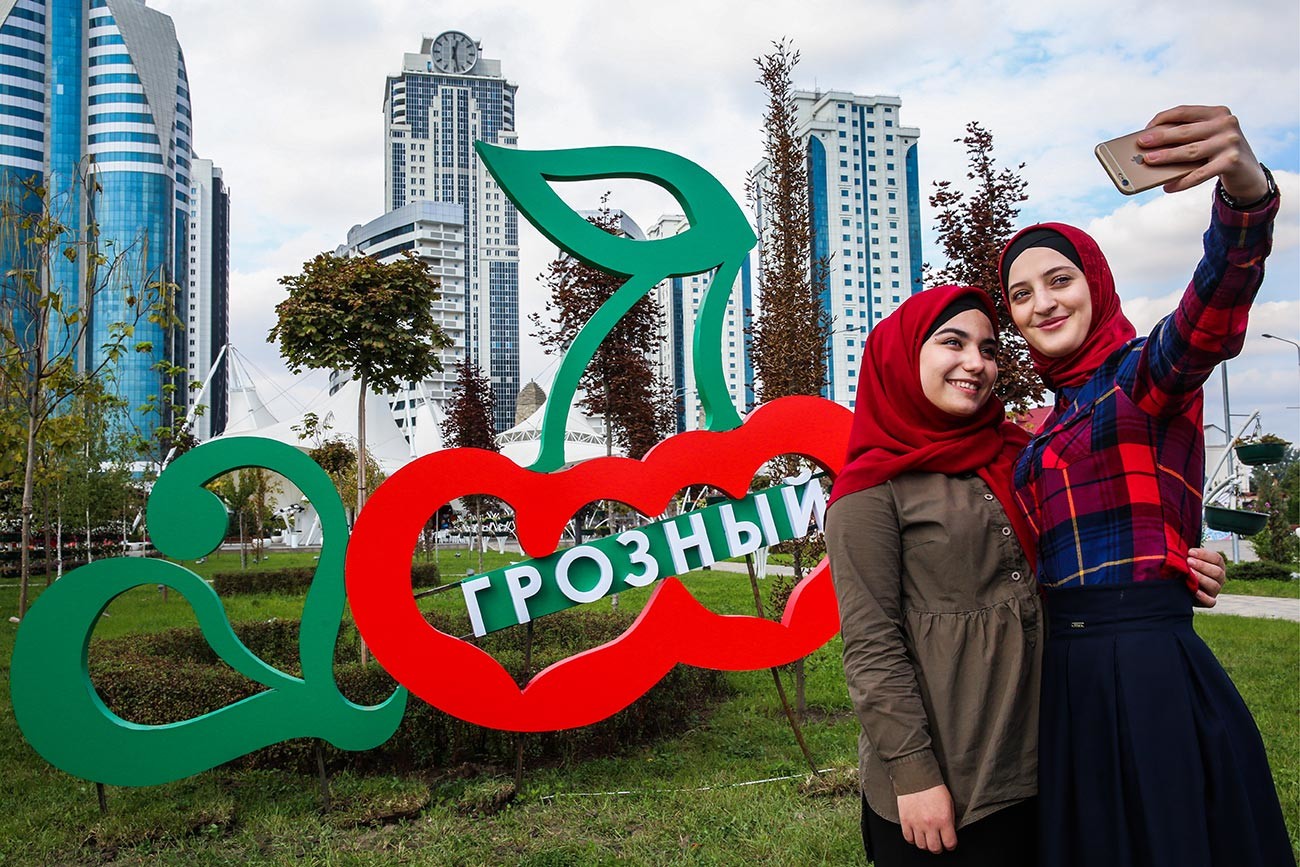 In the center of Grozny.

Grozny is also home to the largest mosque in Europe, called the Heart of Chechnya. It can accommodate up to 10,000 worshippers and has a magnificent garden, fountains and hotel.

“The Heart of Chechnya mosque is one of the most beautiful places in the city,” says riding instructor Diana. “There is also a flower park here, an observation deck called Stairway to Heaven, and the Siradin equestrian park...For me, the city is 100 percent comfortable!”

Diana says that Grozny always gives a warm welcome to visitors. "We are glad to see every tourist and greet people with an open heart." 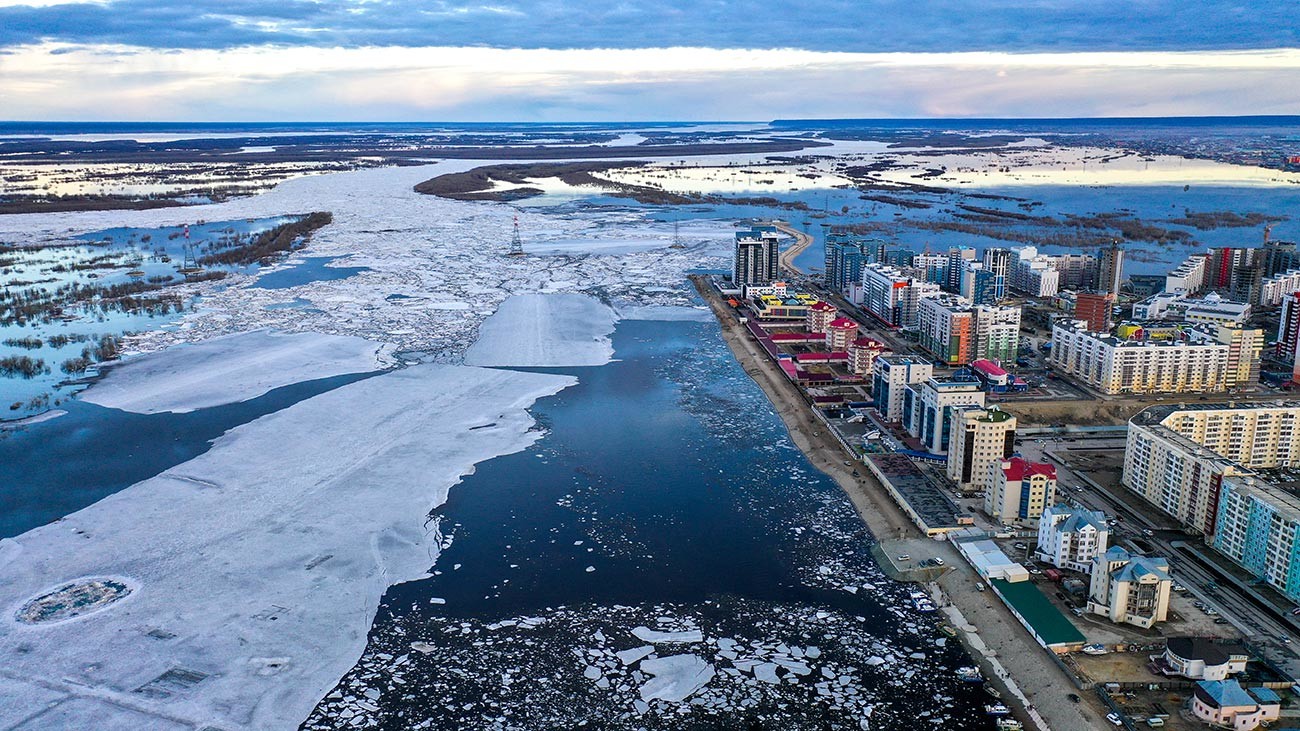 This is one of the most amazing cities in Russia and combines the Yakut culture, -50 C Siberian frosts and permafrost architecture. All the buildings here are built on stilts so that their heating does not melt the permafrost, and the facades are painted in bright colors that help to navigate the city through frosty mist. During the winter, many local residents wear traditional Yakut fur boots (unty) or Russian felt boots (valenki) because ordinary footwear will not take you very far here. 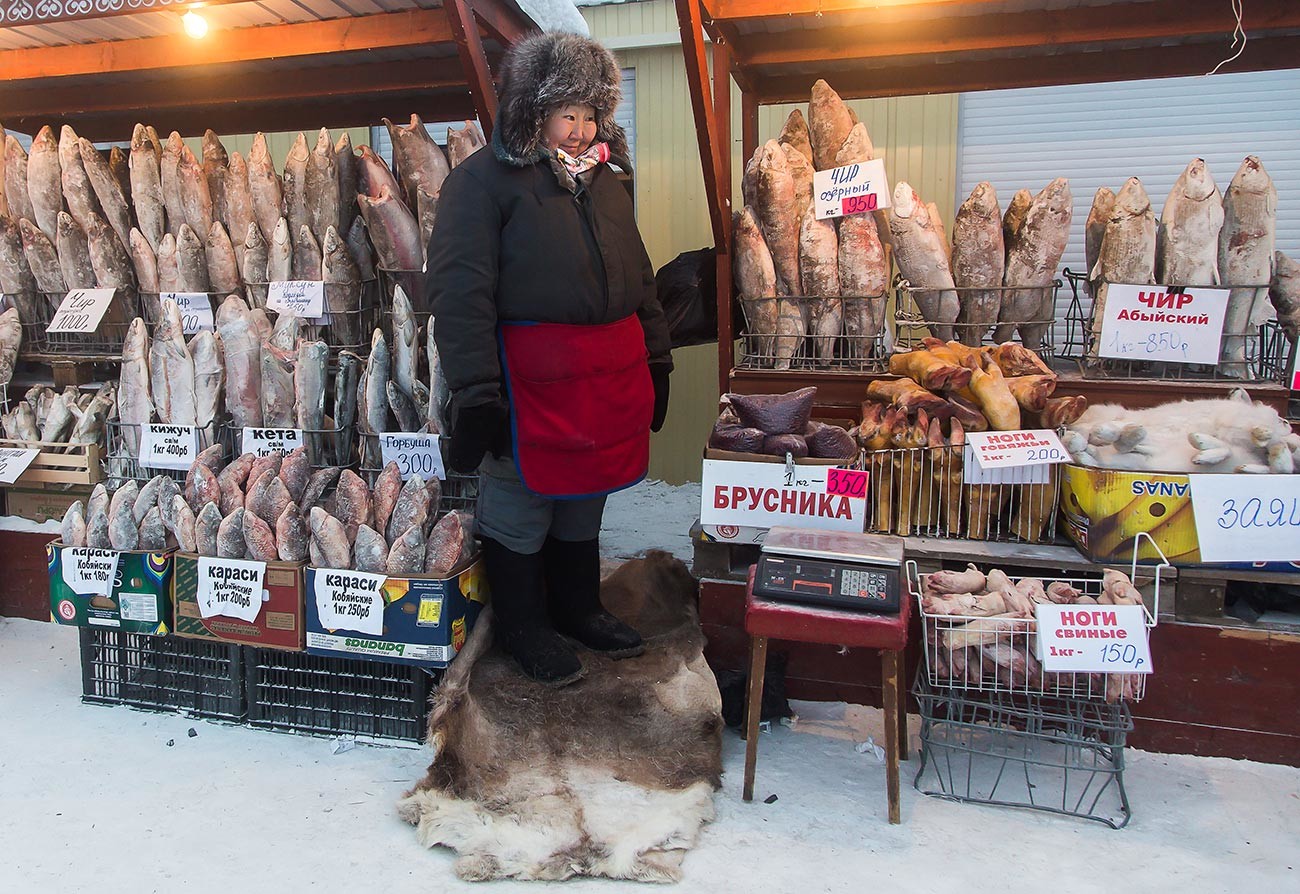 In Yakutsk, young city planners are busy creating new parks and recreation areas. “Architects want to see a modern city, and our task is to create public spaces that take into account the climatic features of the place,” says architect Sergei Permyakov. Even power lines and pipes in the city are decorated with panels with Yakut patterns.