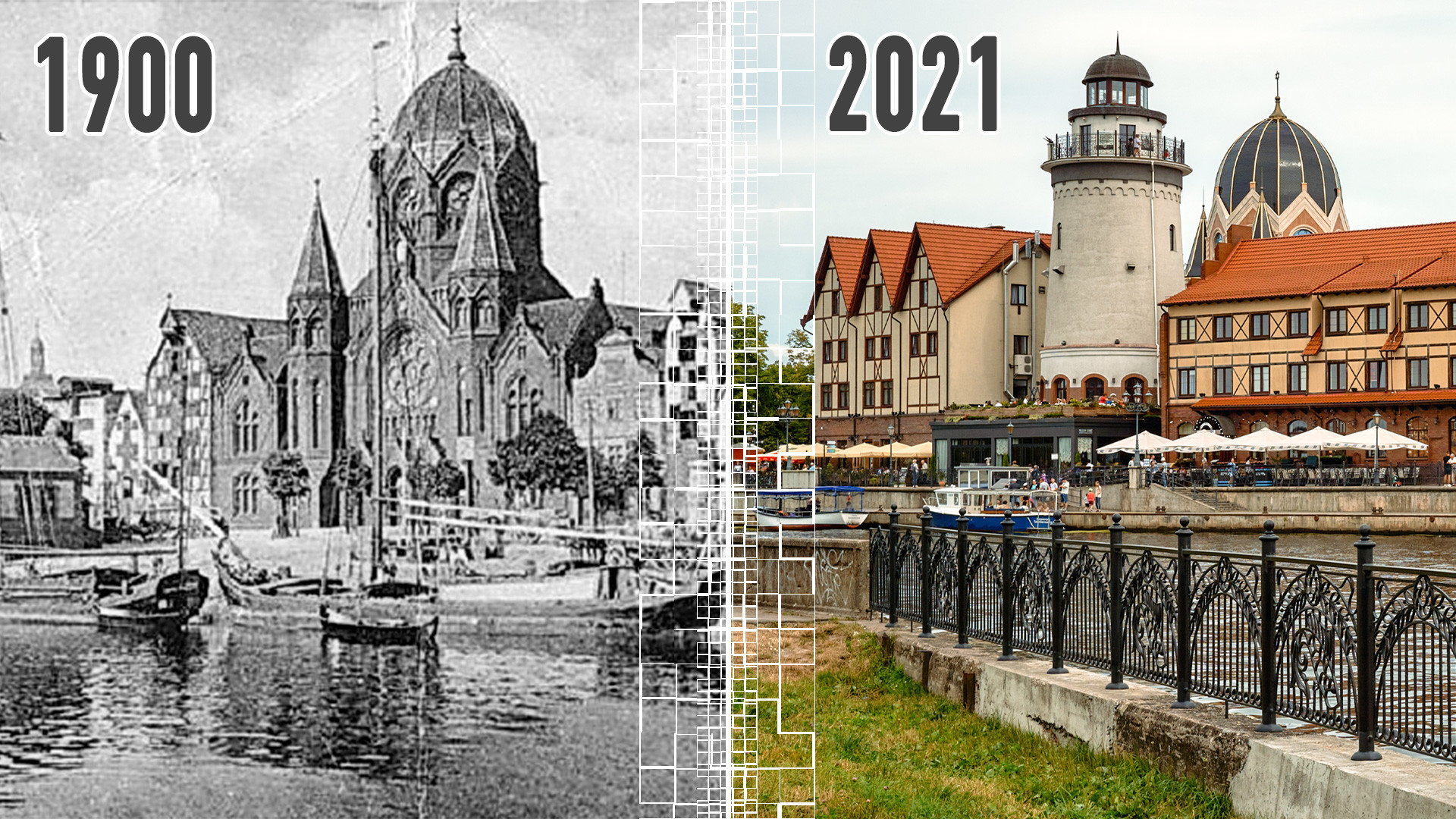 One of the most popular public spaces in the city, New Holland (Novaya Gollandiya) opened in 2016 on two human-made islands of the same name. These islands appeared at the beginning of the 18th century and were used as warehouses for shipbuilders. The buildings were in use up until the end of 2004, when the site was transferred to the city and turned into a park. The former naval prison turned into a trendy food and shopping space, the blacksmith shop and warehouse buildings became restaurants, and the commandant's house now hosts all sorts of classes for children.

2. Church of the Savior on Blood, St. Petersburg 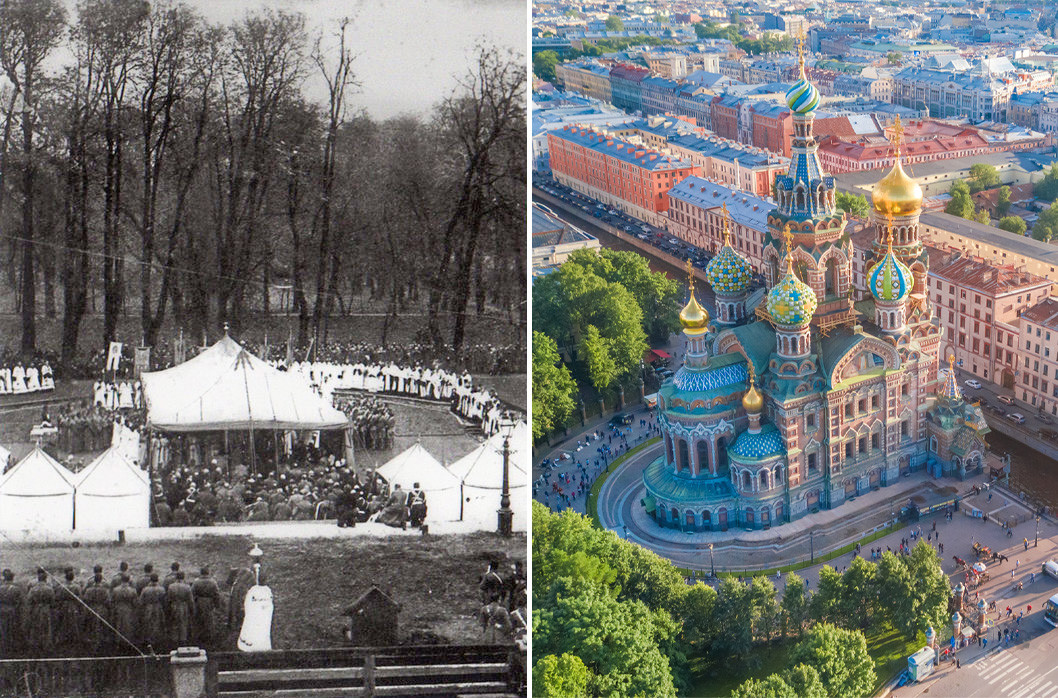 The first photo was taken in 1883. The second one nowadays.

The symbol of St. Petersburg, this Russian-style church was built beginning in 1883 on the bank of the Griboyedov Canal. Emperor Alexander II had been assassinated here two years before, and there was a chapel commemorating the tragedy. 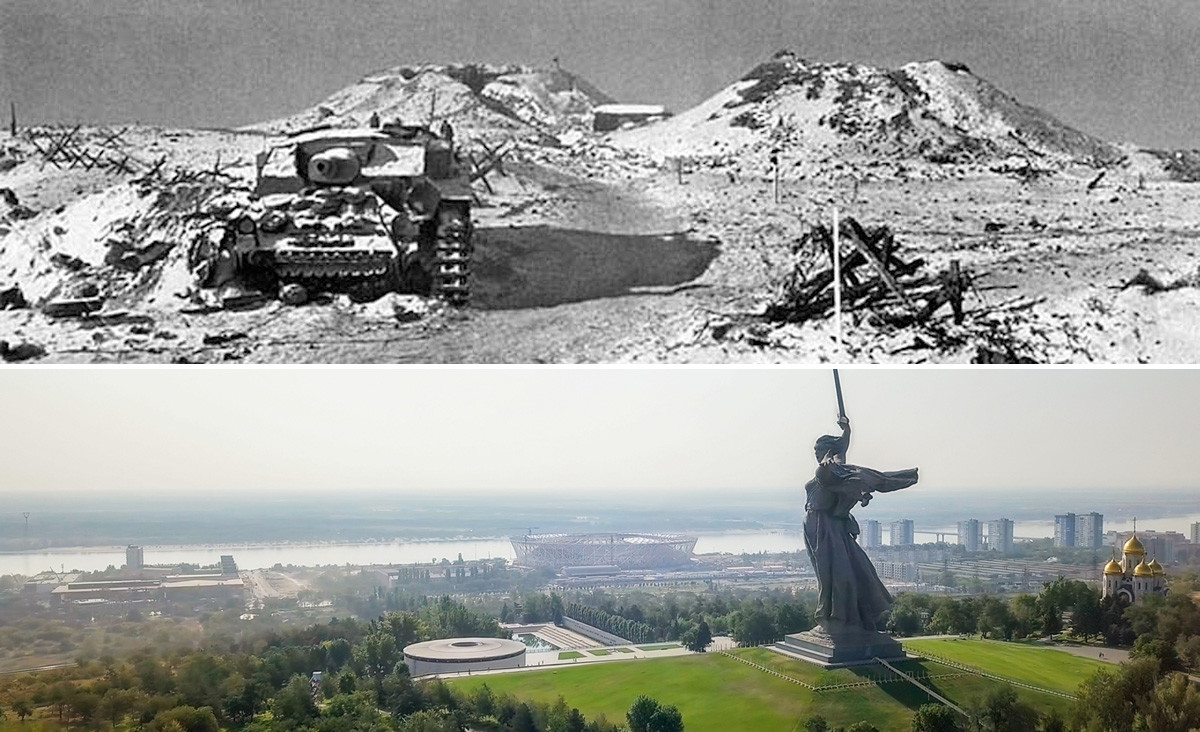 Mamayev Kurgan after the war, 1945, and the view from the same point today.

The colossal figure on Mamayev Kurgan, dedicated to the heroes of the Battle of Stalingrad (the Soviet name of Volgograd), was opened in 1967. Fierce battles took place here in 1942-1943 on the right bank of the Volga River. More than 35,000 defenders of the city are buried in the graves of Mamayev Kurgan.

This imposing cable bridge connecting the city of Vladivostok with Russky island was opened in 2012 prior to the APEC summit. It is one of the largest cable-stayed bridges in the world with a span length of 1,104 meters. Historically, navy units were located on the island, and it was possible to get there by ferry only. Closed in the Soviet years, Russky Island has now become a popular new attraction for tourists who want to see the old military buildings and enjoy beautiful nature close to the city. The opening of the bridge reduced travel time to the island from three hours to just 20 minutes.

Tatarstan’s main mosque was built inside the Kazan Kremlin in 2005. The historical mosque was destroyed in the mid-16th century when Ivan the Terrible’s troops stormed Kazan. The reconstructed Kul Sharif Mosque occupies the territory of a former junker school.

Before the 2014 Winter Olympics, this was a residential area and home to the historical Colchis swamps with their own ecosystem. The Natural Ornithological Park was established here in 2010 to protect the area’s rare bird life. People were moved to neighboring areas, and their strawberries fields turned into the Olympic village. There are now several stadiums for winter sports, a fountain show, restaurants, and an amusement park. The only reminder that people lived here not so long ago is an Old Believer cemetery, which is located behind the Fisht stadium and hidden among the tall trees.

This ethnographic complex on an island in the center of Kaliningrad was built in the 2000s. Several houses with hotels and restaurants, a lighthouse tower with an observation deck and a cozy embankment recall the Prussian past of this city, which only became Russian after World War II. The site was previously home to fishing settlements and an old fish market.

This is how Sergey Prokudin-Gorsky depicted Lastochkino Gnezdo in 1904 - and how it looks now.

This palace on the rock called Swallow's Nest (Lastochkino Gnezdo in Russian) is one of the most famous sights of Crimea. At the end of the 19th century, the site was purchased for the construction of a house by doctor Adalbert Tobin and his wife Elizabeth, who planned to develop a resort here. The building’s current Gothic look came about in 1912, when it was bought by the millionaire Sergey Rachmaninov, who ordered the demolition of the old building. In the Soviet years, the area of the castle was added with sanatoriums that still work today.

The view from the Volga River, 1886 and the same view nowadays.

The site where this staircase was built was called the Volga Downhill and was very popular among locals since it had one of the most picturesque views of the Volga. The stairs, named after the pilot Valery Chkalov, connect the upper and lower embankments in the historical center of Nizhny Novgorod. And a fun piece of trivia: With 560 steps, these are some of the longest stairs in Russia!

The monument in honor of the 1000-year anniversary of calling of the Varangians to Russia (and the formation of the state) was erected in 1862 in the Novgorod fortress, near the ancient St. Sophia Cathedral. There was a monument here to the Novgorod militia of 1812, which was moved to the Sofiyskaya, the city’s main square. Bolsheviks demolished it in 1933, but the Millennium of Russia miraculously remains intact to this day.