The Elijah Church at Tsypino: Resurrecting a wooden masterpiece 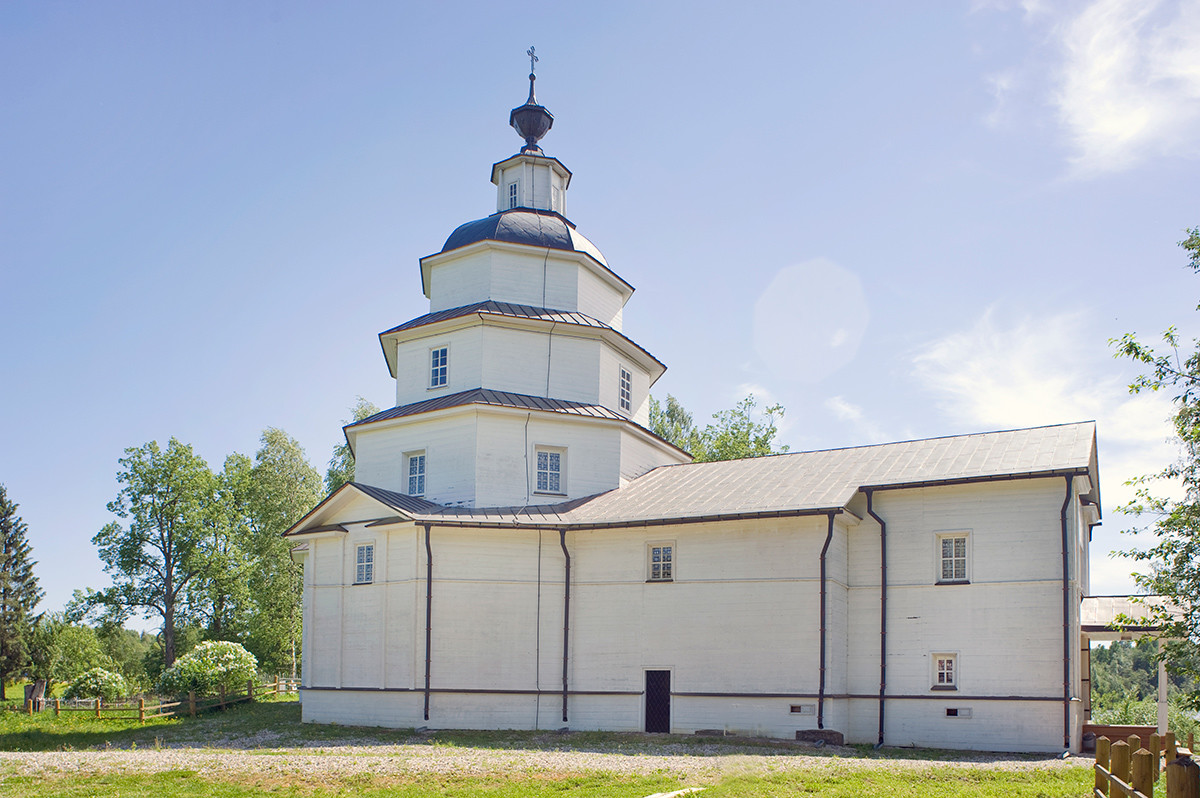 In the summer of 1909, Russian chemist and photographer Sergey Prokudin-Gorsky took an extended journey through the Russian North. He traveled to the region again in 1916 on his last major expedition before leaving Russia in 1918. His photographs from this period include several wooden churches and chapels, almost none of which have survived. 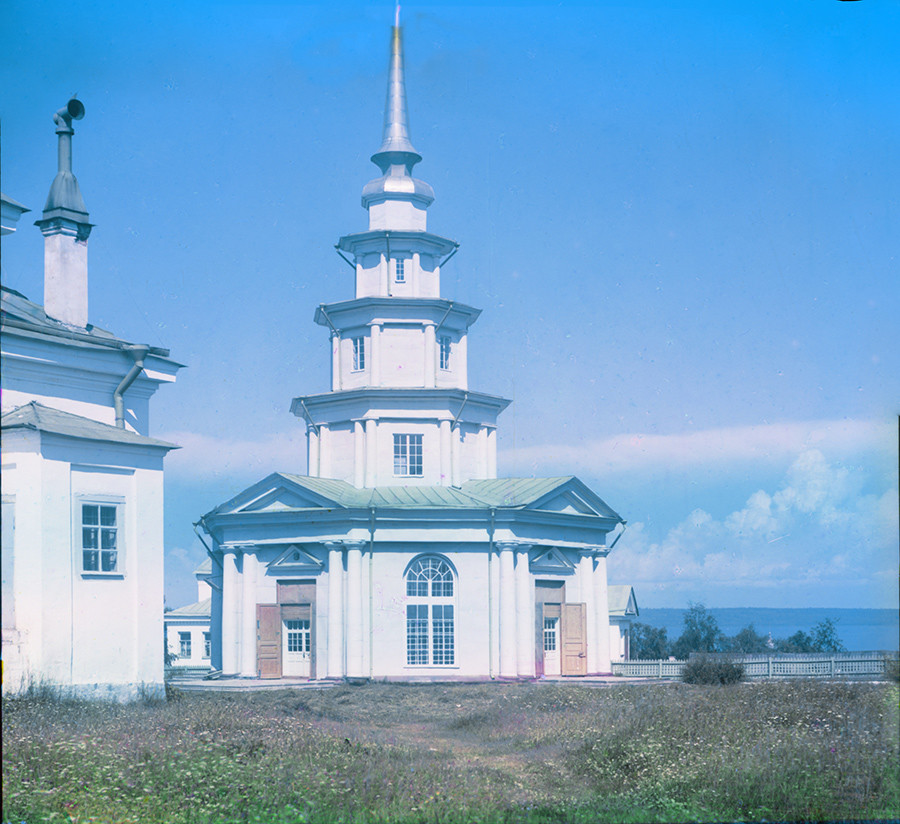 In Petrozavodsk—now the capital of the Russian Republic of Karelia—he photographed two large wooden churches, one of which was dedicated the Church of Sts. Peter and Paul. Referred to as a cathedral in some sources, the shrine was built at the beginning of the 18th century during the reign of Peter the Great. 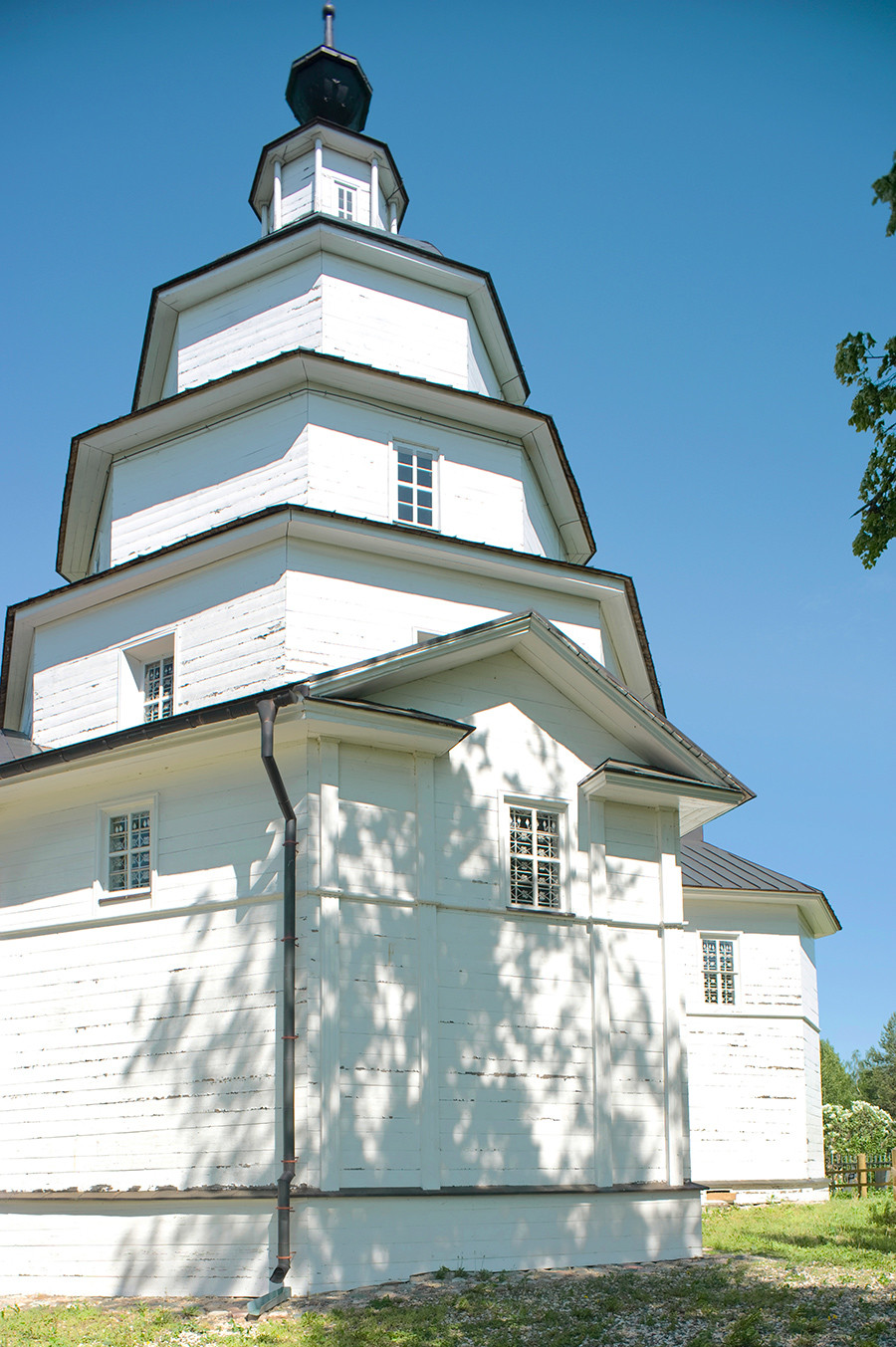 Local legends claimed that Peter himself designed it, and the dedication to Sts. Peter and Paul is an unmistakable reference to Peter’s heavenly patrons. Whatever the design source, it is likely that Peter supported the church as an emphatic statement of Russia’s presence in a strategic border area contested by Sweden. Indeed, Petrozavodsk ("Peter’s factory”) was founded in 1703 to produce iron for the new Russian navy during the Great Northern War (1700-21). 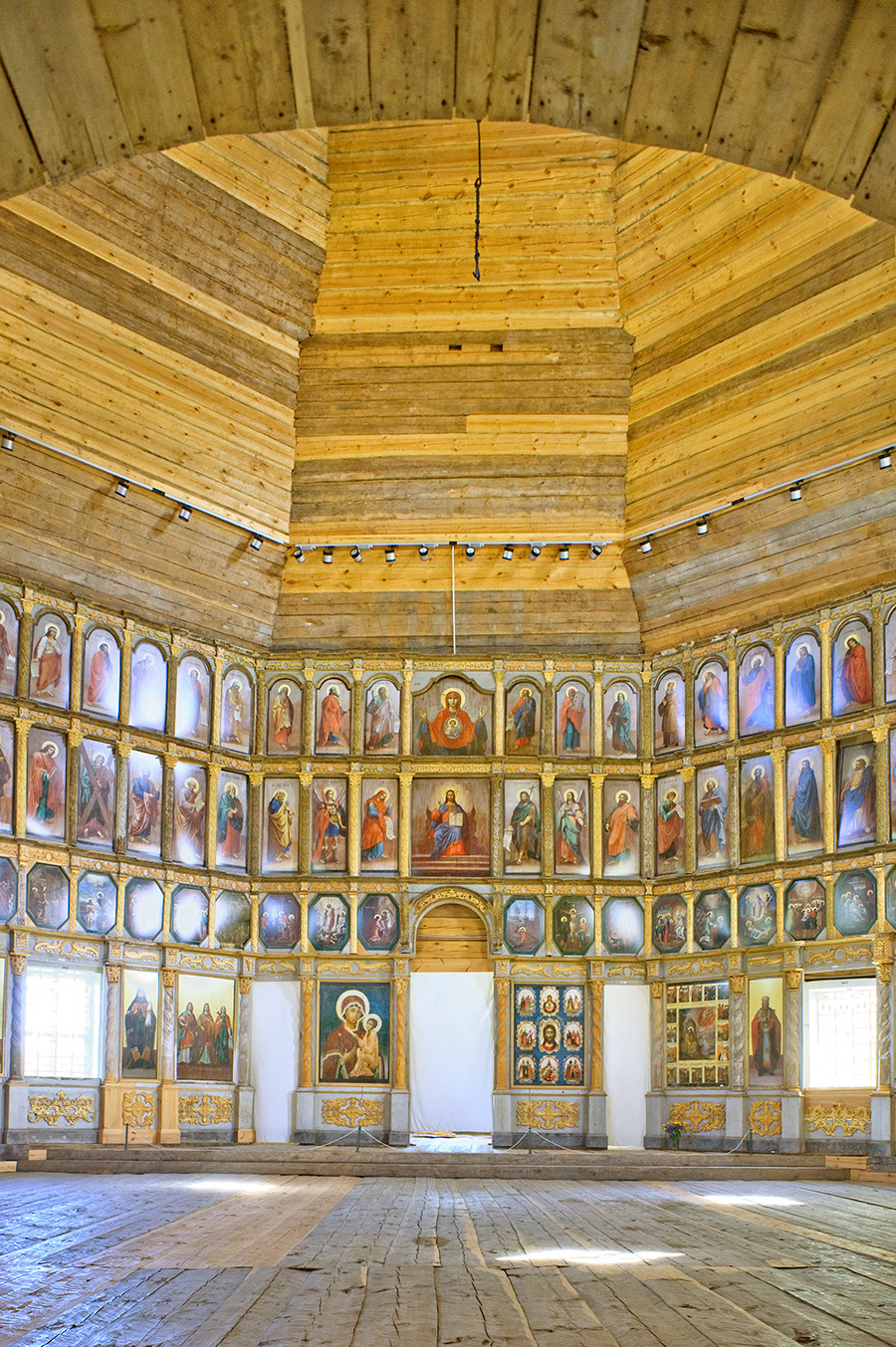 In October 1924, the Church of Sts. Peter and Paul was destroyed by a lightning strike, and thus Prokudin-Gorsky’s brilliantly lit photograph from 1916 is the best view of the lost monument. Its distinct vertical design is based on a traditional form known as a “tiered” church, consisting of ascending octagonal tiers. 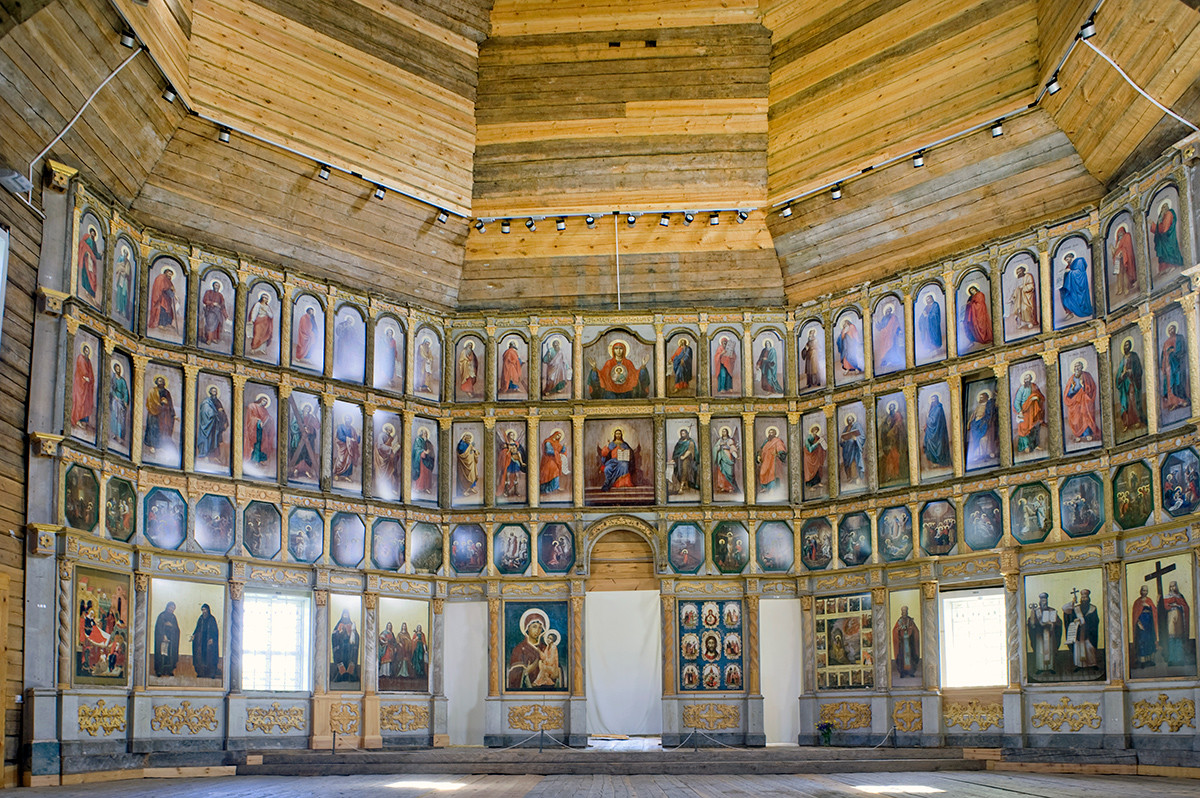 At the same time the Peter-Paul Church has elements peculiar to Petrine architecture, such as a tall spire and the presence of balconies that allowed the structure to be used for observation over Lake Onega. In 1784 the church was renovated with the additional of neoclassical details and plank siding painted white. 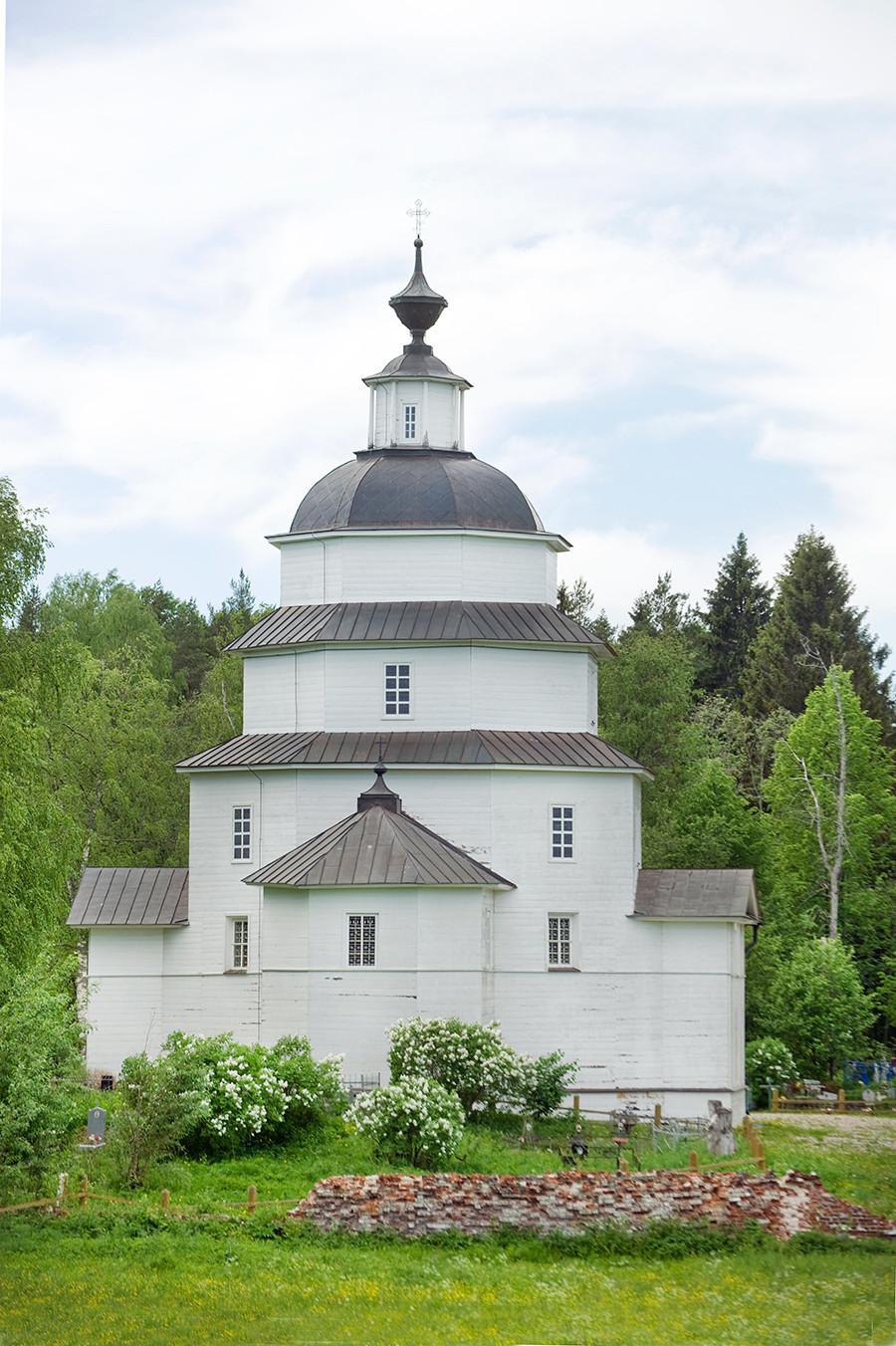 Although the Peter-Paul Church in Petrozavodsk no longer exists, there are other tiered churches that have survived in the Russian North. One of the most impressive examples was the object of a recent extraordinary restoration—the Church of Elijah the Prophet at Tsypino (Vologda Region), built in 1755. 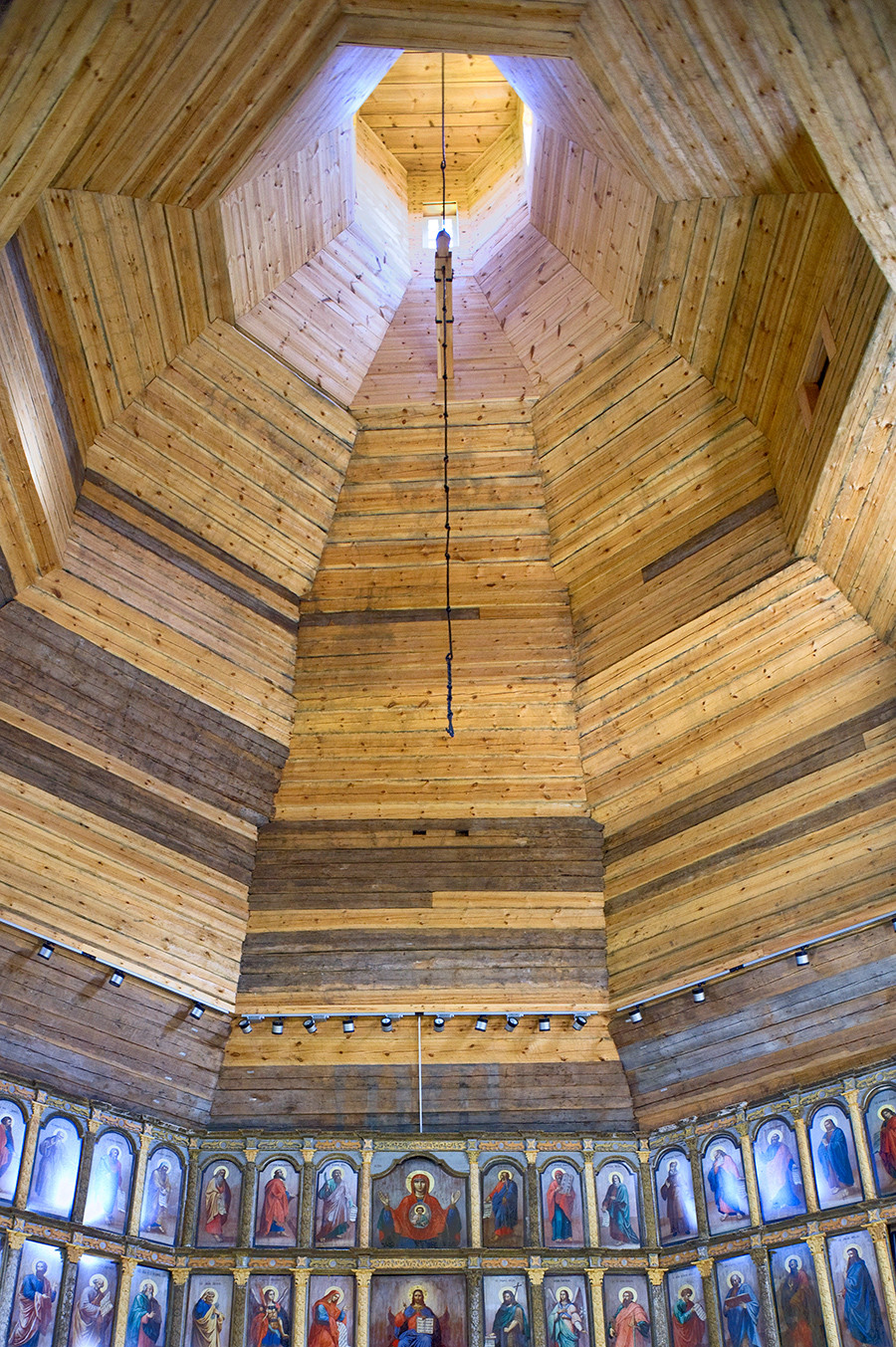 This remarkable wooden monument is located near one of Russia’s most revered cultural and spiritual landmarks, the Ferapontov-Nativity Monastery, designated a UNESCO World Heritage site for its superb early 16th-century frescoes. There is no evidence that Prokudin-Gorsky visited this site, although he photographed extensively at the St. Kirill of Belozersk Monastery as well as the Resurrection Convent at Goritsy, both of which are only a few miles away.

My own encounter with the church is a fortunate case of being present before and after a major restoration. I stumbled upon the site in July 1999, when the forest growth surrounding the log ruins was being cleared. I returned 15 years later, in June 2014, when the Elijah Church stood in its splendidly restored form. 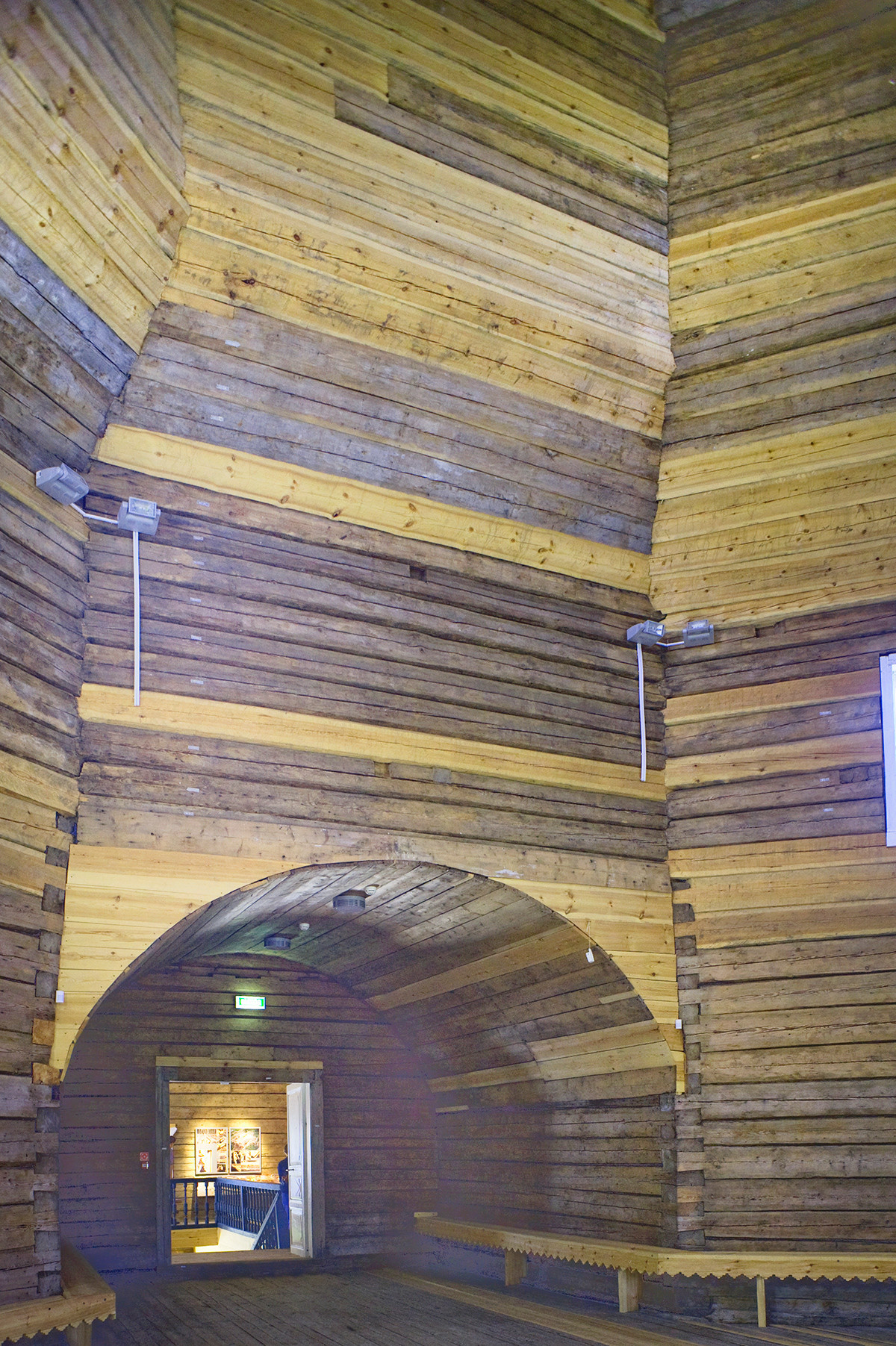 The village of Tsypino is now tiny, but its origins date at least to the 16th century, and in the late 19th century, it was the center of a thriving agricultural parish with over 20 villages. At that time, it was adjacent to a sacred space known as Tsypinsky Pogost, which consisted of the Elijah Church as well as a brick church built in 1800 with altars dedicated to St. George and St. Demetrius of Thessaloniki. The entire territory of the pogost—including parish houses and a cemetery—was surrounded by a solid wooden fence painted white.

The Elijah Church that stood in the 19th century was built of pine logs and consecrated in 1756. Its tall, spacious form consisted of three ascending octagonal tiers over an octagonal base, from which extended four arms of the cross. The east arm contained the primary altar and the west arm served as the main entrance. 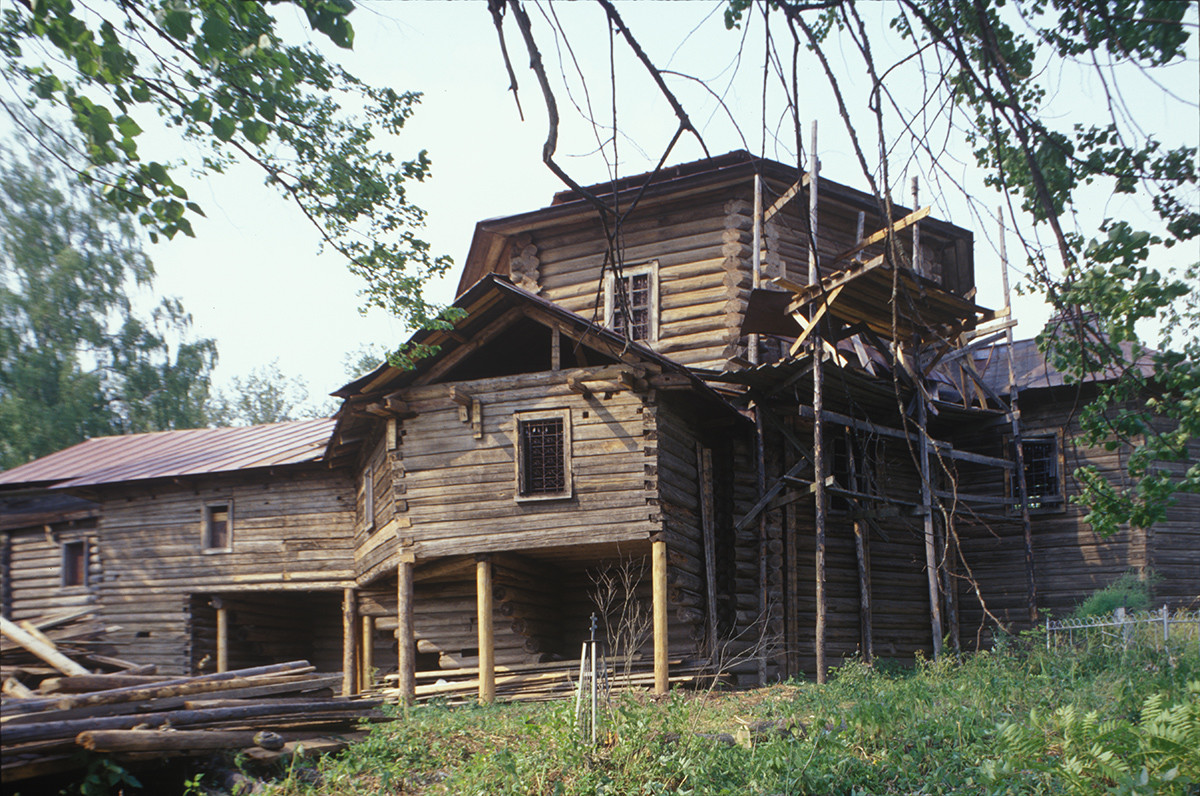 Church of Elijah the Prophet. Southeast view before restoration. July 15, 1999

The base structure of the church is encompassed on the south, west and north sides with a raised gallery resting on extended logs, still visible in my 1999 photographs. The structural design is a marvel of functional ingenuity and aesthetic harmony, enhanced by an ideal site overlooking the small Elijah Lake.

The interior of the church was centered on a large icon screen that rose into the canopy formed by the upper tiers. Four majestic rows of sacred images looked down upon those assembled in the church’s wide octagonal space, unencumbered by columns or piers. 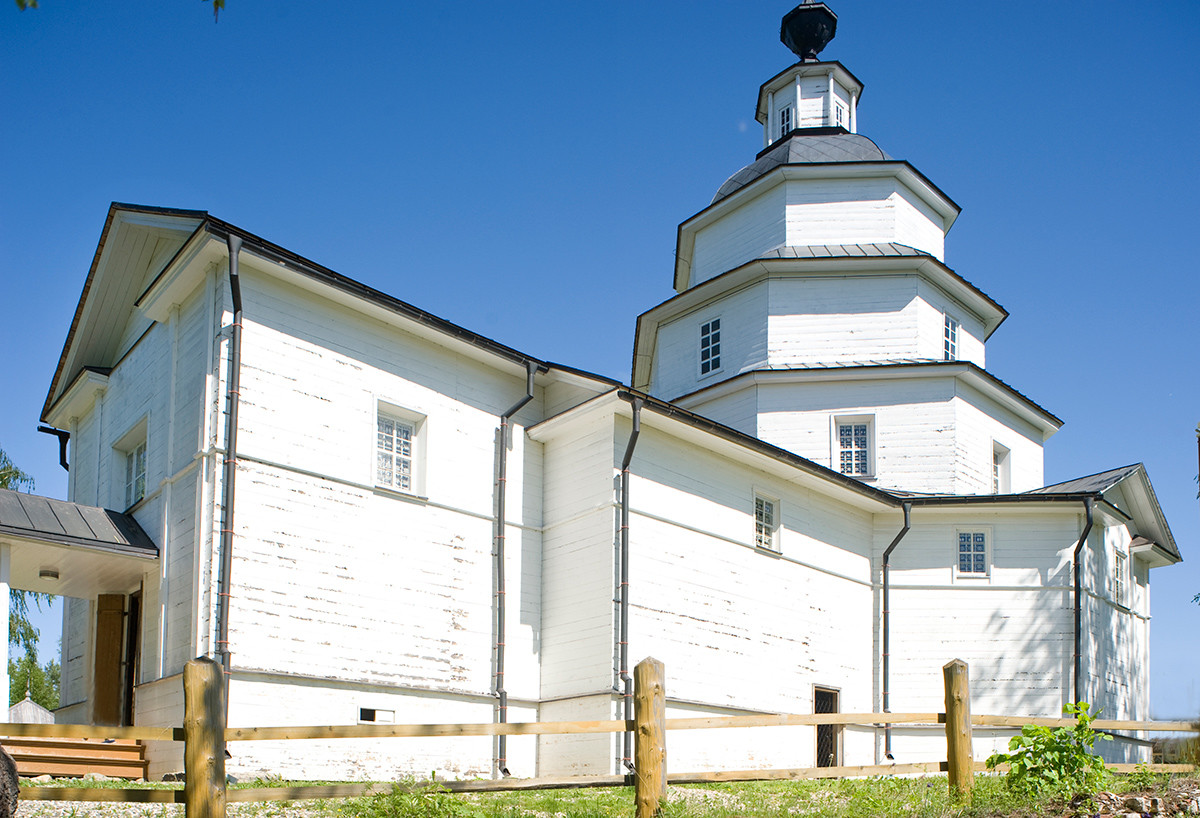 The priest of the Elijah Church for much of the late 19th century (1862-1895) was Father Ivan Brilliantov, two of whose sons, Alexander and Ivan, became specialists in Russian history. Ivan in particular played a leading role in the study and preservation of the extraordinary artistic legacy surrounding the Ferapontov Monastery, Tragically, both succumbed to the wave of Soviet repression directed against regional historians in the early 1930s. 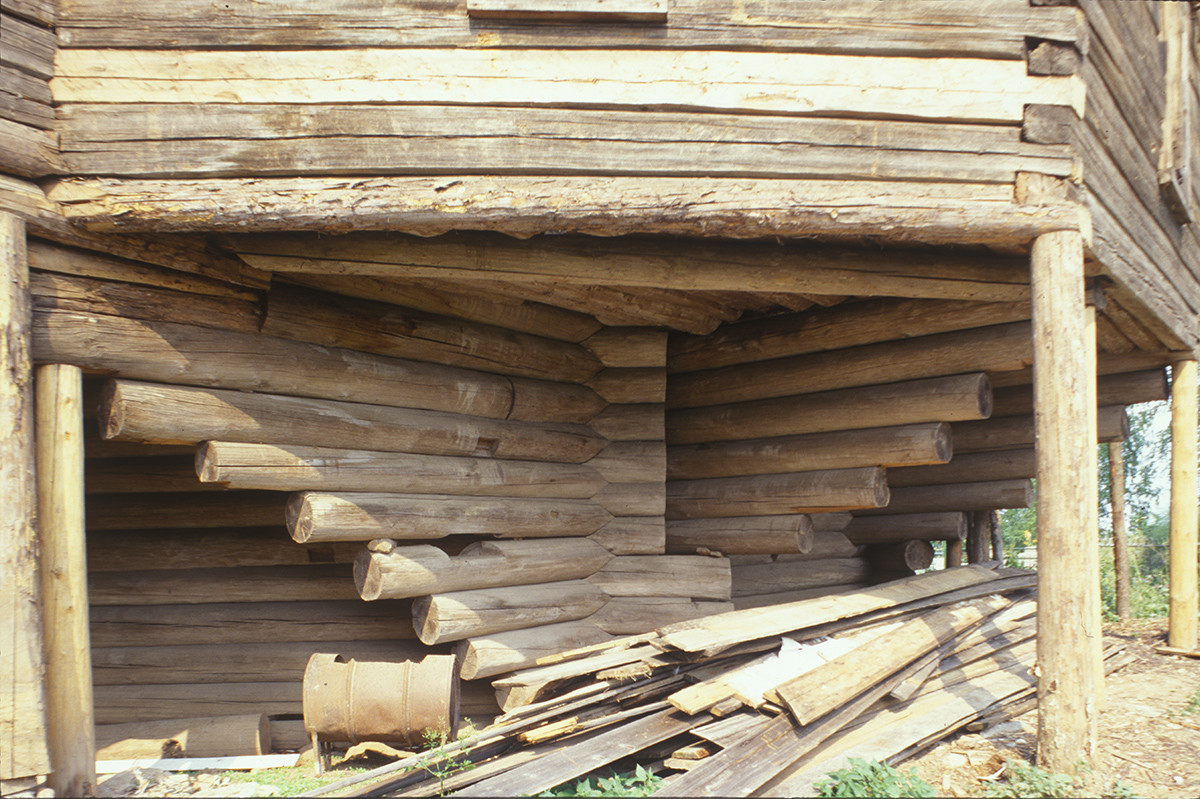 Closed in 1935, the Elijah Church fell into decay. The cupola collapsed in 1958, and the two upper tiers fell soon thereafter. The icons had already been gathered at the nearby local history museum in the former St. Kirill of Belozersk Monastery in the small regional center of Kirillov. The adjacent Church of St. Demetrius of Thessaloniki was razed for brick, and most of the pogost structures were destroyed. 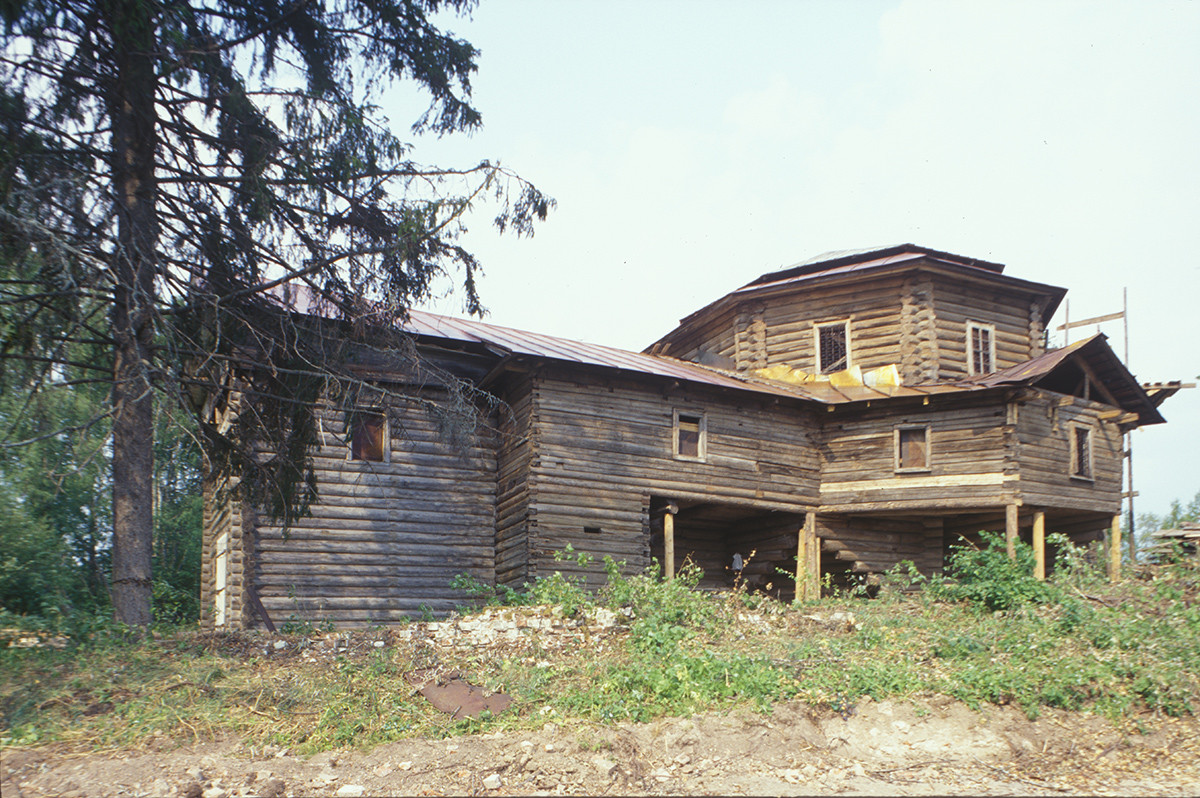 Church of Elijah the Prophet. Southwest view before restoration. July 15, 1999

Fortunately, this major example of Russian wooden architecture had been documented in photographs and was not totally forgotten. In 1995, a presidential order included the Elijah Church in the list of architectural monuments of national significance. When I first photographed the structure in the summer of 1996, work had just begun on clearing the overgrown site around the surviving log courses of the base structure.

The restoration proper was begun in 2003 under the direction of Alexander Popov, a leading practitioner of historic restoration methods with an emphasis on log structures. The restorers’ first task was to completely disassemble and study the remaining structure. An examination of stroke marks on the original logs led to the creation of extended, narrow-bladed axes replicating those used in the construction of this 18th-century structure. 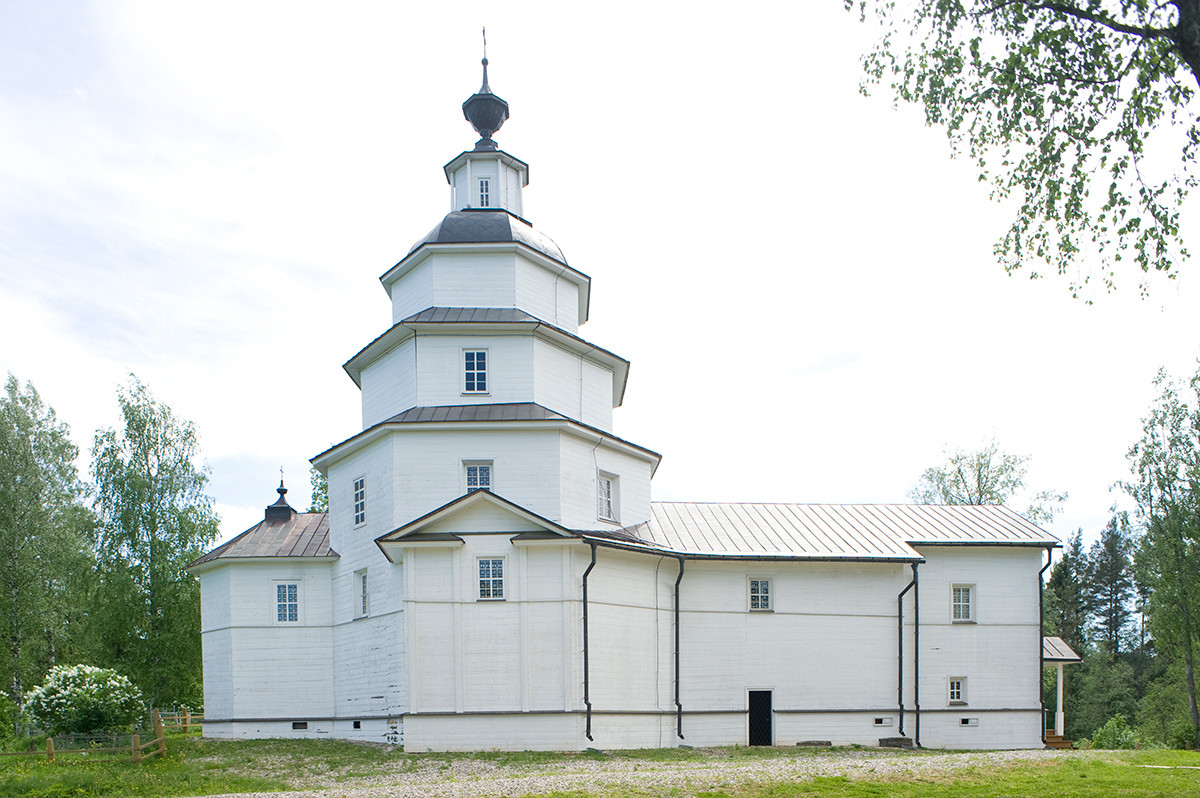 The careful, methodical rebuilding of the church by master craftsmen extended through the summer of 2009, when the monument was reopened to visitors. As in the 19th century, the exterior is clad in plank siding painted white.

This cladding was typical practice in the 19th and early 20th centuries, but post-war Soviet restorers of wooden architecture made a practice of removing the siding to reveal the original appearance. A new approach restores the siding in cases where it is clearly documented. Some have argued that this helps preserve the log structure underneath, yet it also conceals structural elements and techniques such as those I photographed in 1999. 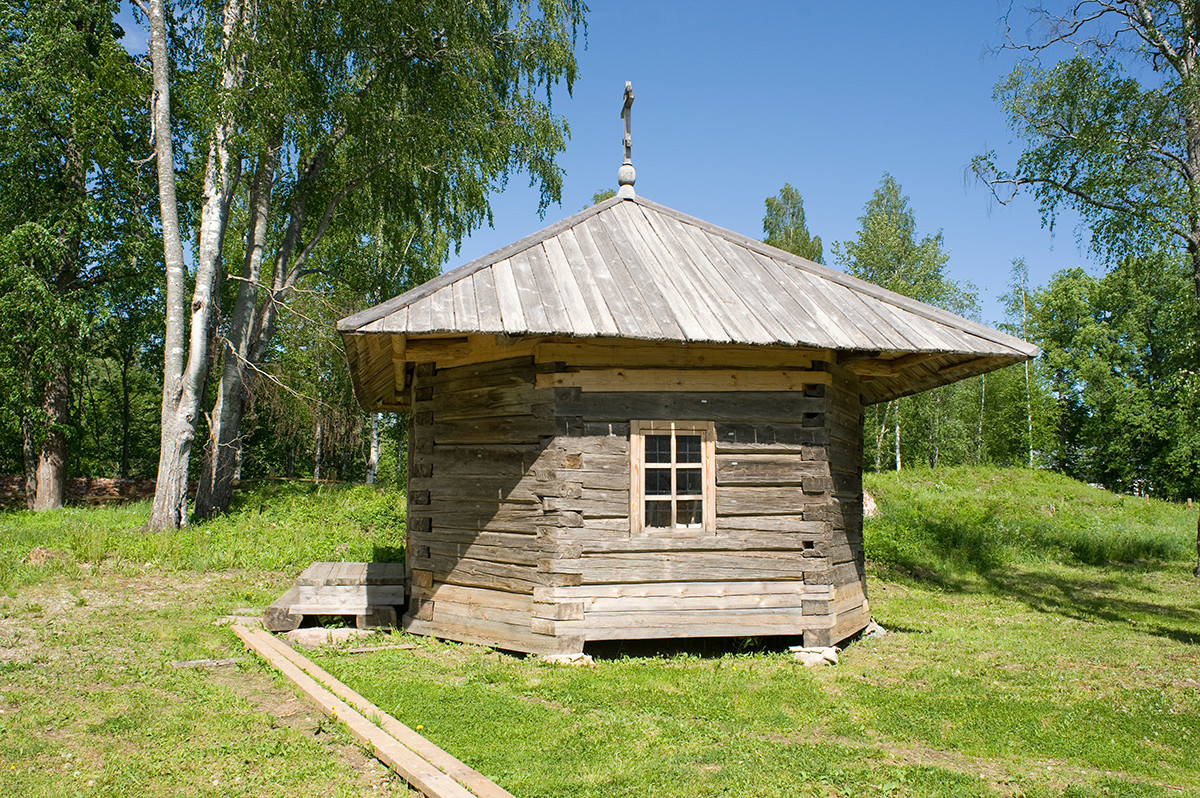 Work has continued on the interior of the Elijah Church. In 2010 a reconstruction of the carved wooden icon screen was completed with photographic reproductions of the icons. A selection of the original icons is preserved in the museum at the St. Kirill of Belozersk Monastery. The gallery of the Elijah Church contains museum displays on the region and its folk culture.

The sublime Elijah Church has now been joined by a tiny log chapel brought from the nearby village of Pasynkovo. Its square logs, tightly joined by a dovetail technique, were reassembled in 2010 by a team of Polish restorers. 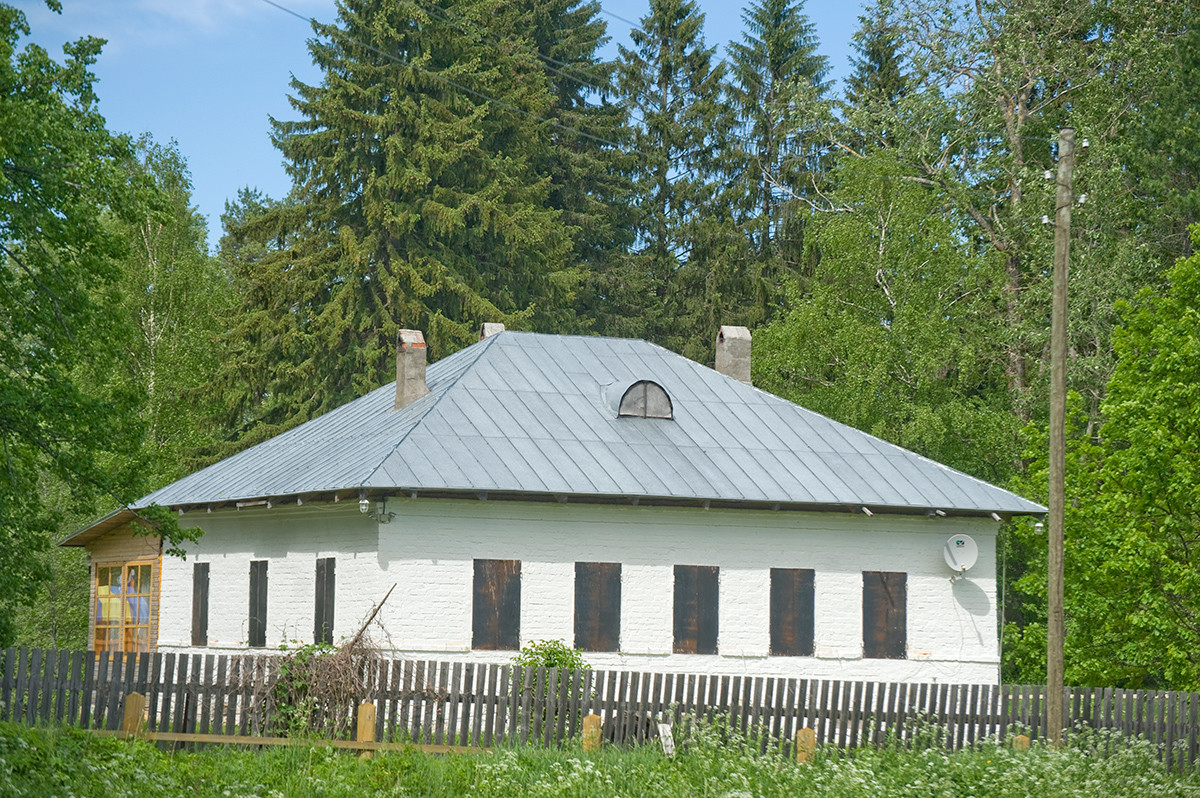 Although not fully recreated in its pre-revolutionary form, the Tsypinsky Pogost site has been resurrected as a worthy addition to the masterpieces at Ferapontov Monastery and the St. Kirill Monastery. The town of Kirillov is now the headquarters of the “Russian North” National Park, closely linked to tourist destinations such as White Lake (Beloe Ozero), the neighboring historic town of Belozersk and the Tsypina Gora ski resort.

Despite the continuing loss of monuments of Russian wooden architecture, the Church of Elijah the Prophet at Tsypino is stunning testimony to what can be accomplished with the proper combination of historical documentation, technical expertise and financial support. 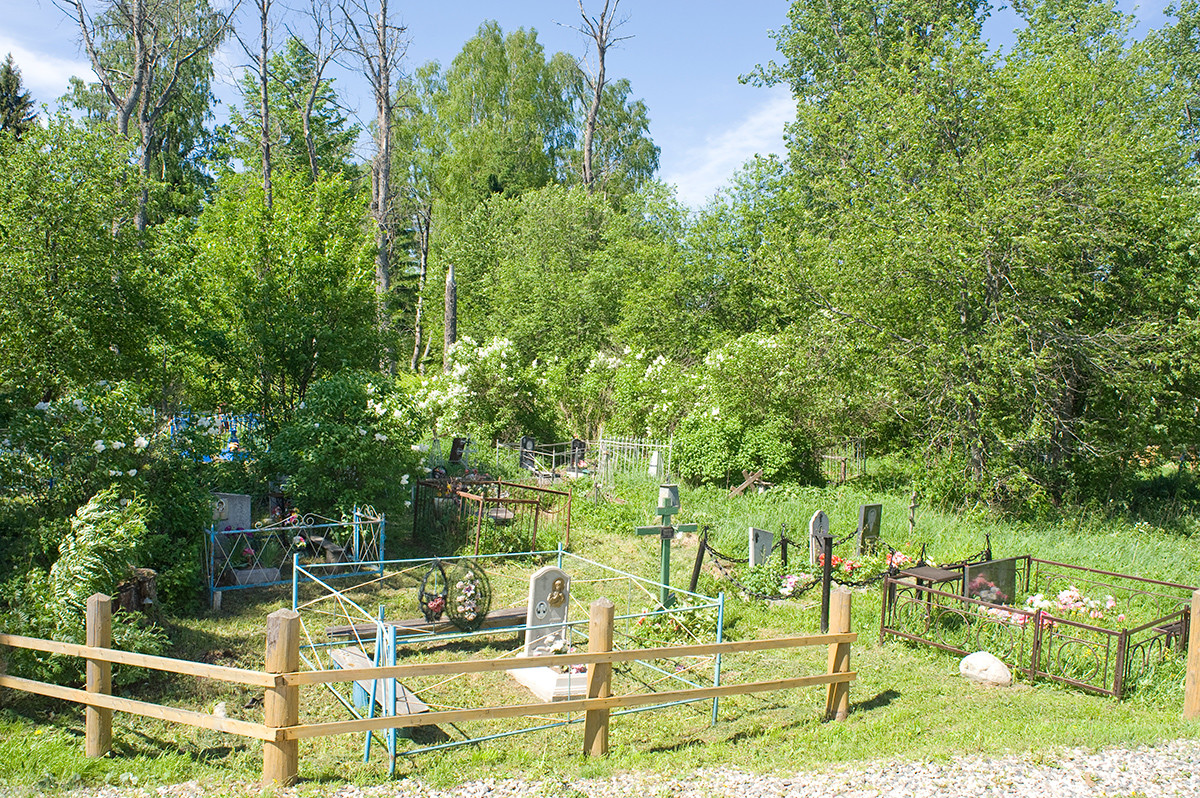 Tsypinsky Pogost. Cemetery at Church of Elijah the Prophet. June 1, 2014