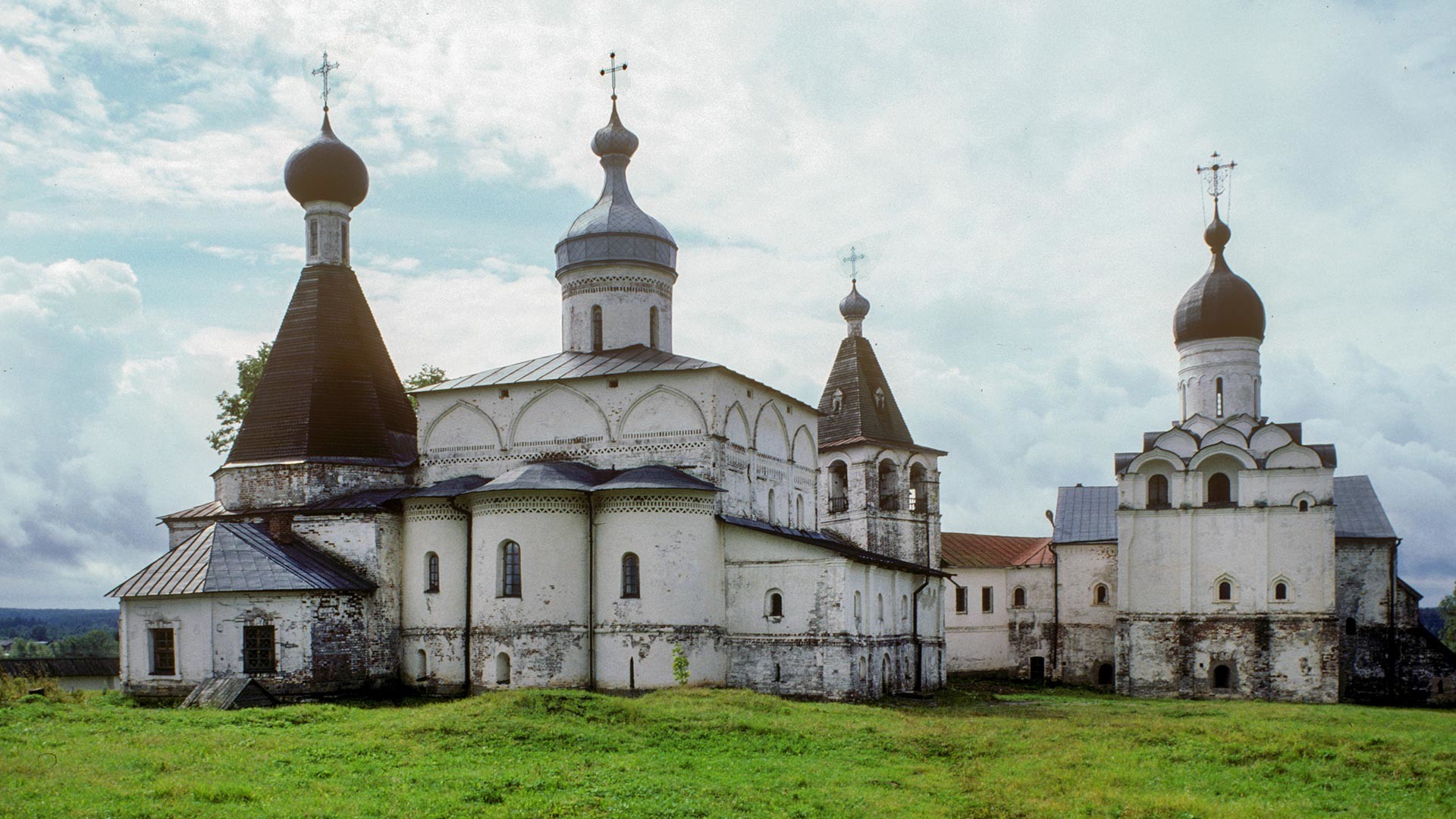 In the summer of 1909, Russian chemist and photographer Sergey Prokudin-Gorsky traveled along the Mariinsky Waterway, which connects St. Petersburg via the Sheksna River with the Volga River Basin. 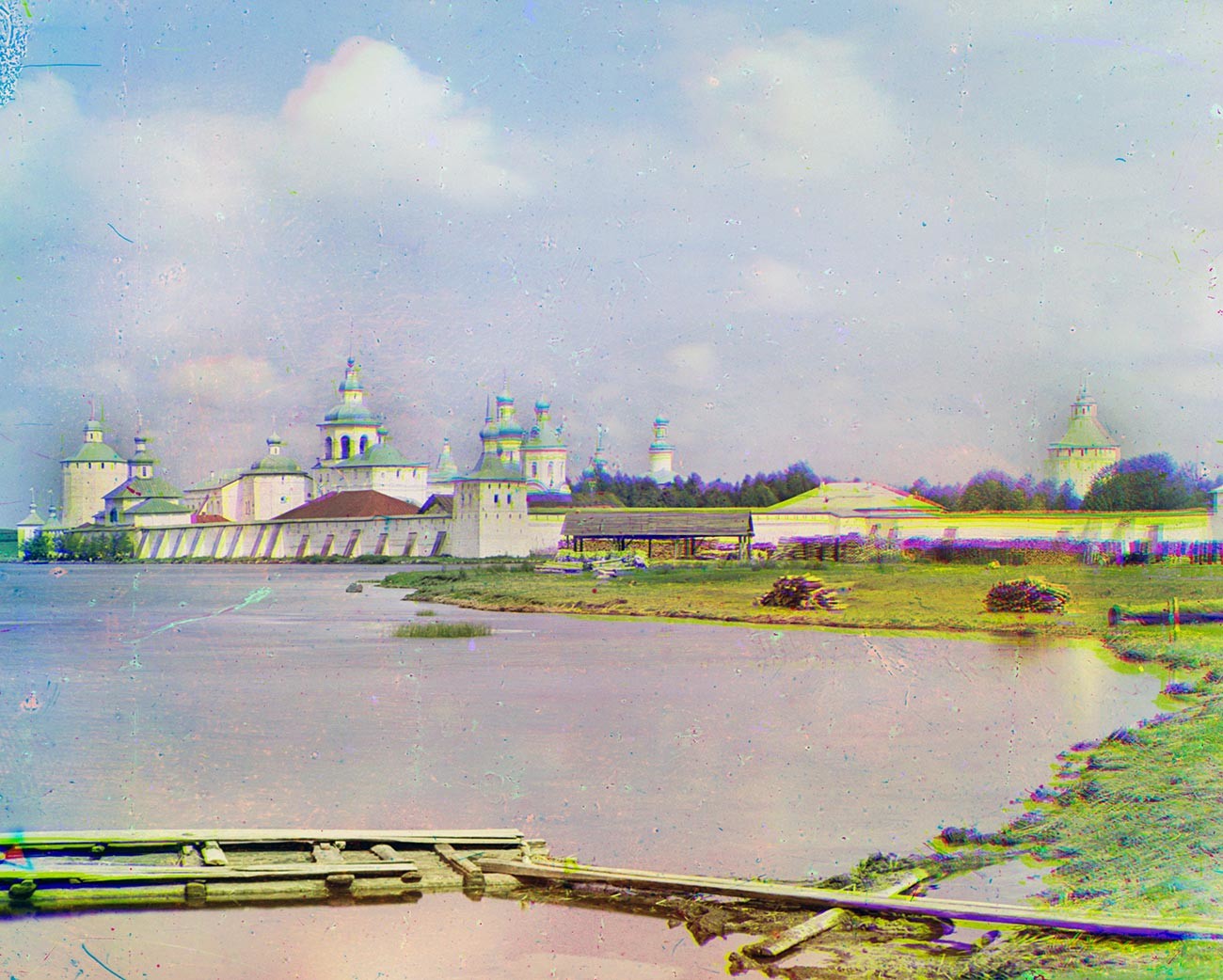 He visited historic settlements in northern Russia, including the small town of Kirillov, site of the St. Kirill Belozersky Monastery. With its massive walls, brick towers and array of churches, this monastery was one of the most impressive sights in the Russian North.

A test of faith 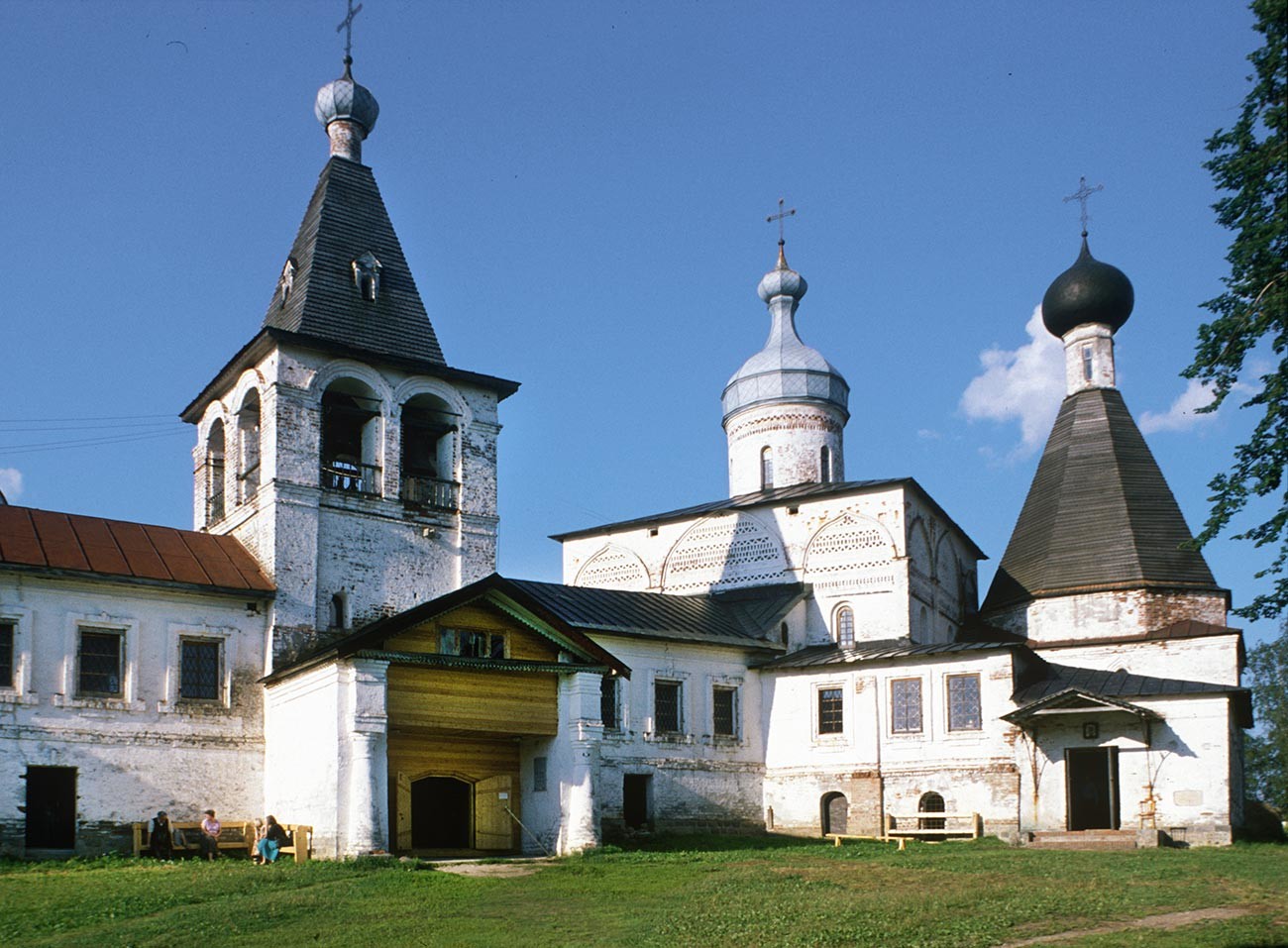 During the 14th-century revival of monasticism in Moscow under the direction of St. Sergius of Radonezh, pioneering monks sought remote northern areas as a test of their faith and dedication. Muscovite princes supported them not only to spread the Orthodox faith but also to consolidate Moscow's territorial expansion into the rich northern forests.

The founding of the Kirillov monastery can be dated to 1397, when the monk Kirill (Cyril) of Belozersk (1337-1427) arrived at Siverskoye Lake and made a cave dwelling for himself. He had taken monastic vows in Moscow’s powerful Simonov Monastery and became a disciple of St. Sergius, who supported his determination. 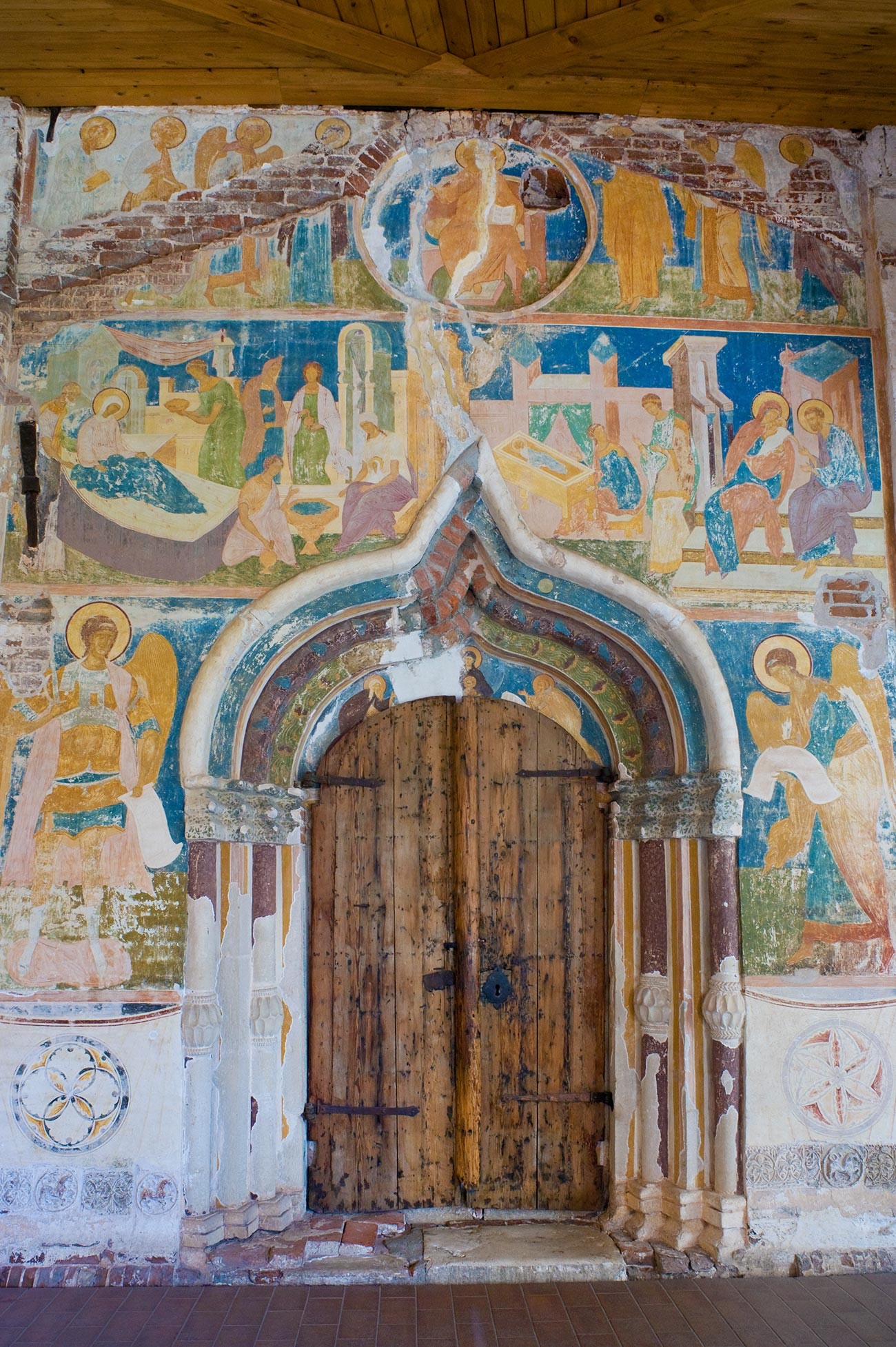 Kirill was joined by the monk Ferapont (1337-1426; also of noble birth and tonsured at Simonov Monastery). Ferapont left in 1398 to found a monastic retreat overlooking nearby Lake Borodavo. Formally dedicated to the Nativity of the Virgin, the monastery acquired the additional name Ferapontov after the monk’s canonization in 1549. Ferapont had the support of Prince of Andrey of Mozhaisk (son of Grand Prince Dmitry Donskoy), who later asked him to establish another monastery at Mozhaisk. 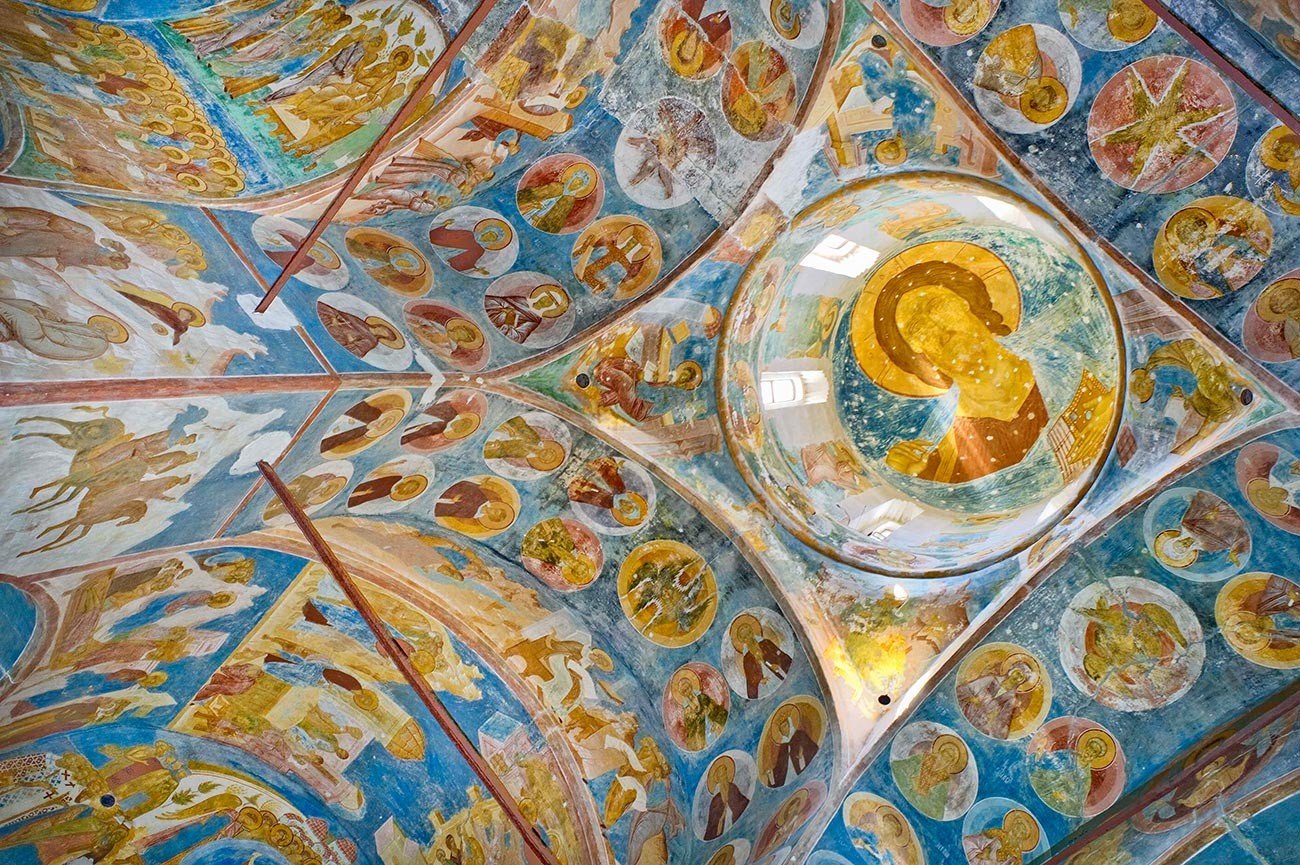 Located not far from the Sheksna River (13 miles), Ferapontov Monastery is of one of Russia’s most revered cultural and spiritual treasures. Nonetheless, it is not included in popular summer cruise itineraries between Moscow and St. Petersburg. Indeed, the small site could easily be overwhelmed by large tour groups. There is no evidence that Prokudin-Gorsky visited it during his work at Kirillov. My own several visits occurred over some two decades, from 1995 to 2014. 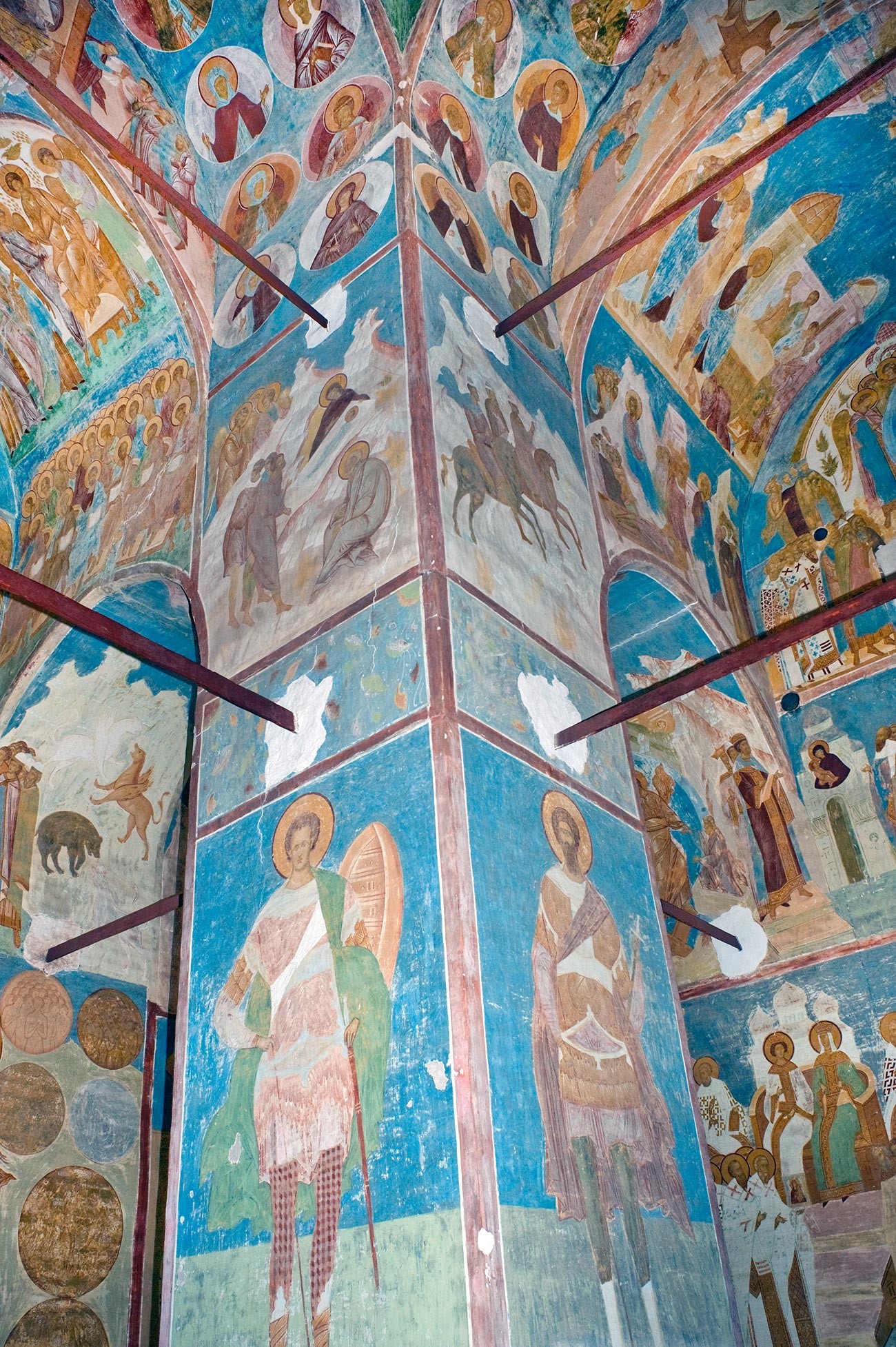 For dedicated art lovers, Ferapontov Monastery and its luminous early 16th-century frescoes are now accessible via paved road from the regional capital of Vologda (75 miles). In recognition of its significance as one of the greatest examples of medieval Russian art, the monastery was chosen in 2000 for inclusion on the UNESCO World Heritage List.

The central monastic church, dedicated to the Nativity of the Virgin and originally a log structure, was rebuilt in brick in 1490 under the guidance of abbot (hegumen) Ioasaf. The upper walls and cupola of the structure were modified as early as the 16th century, with additional changes during the 18th century. 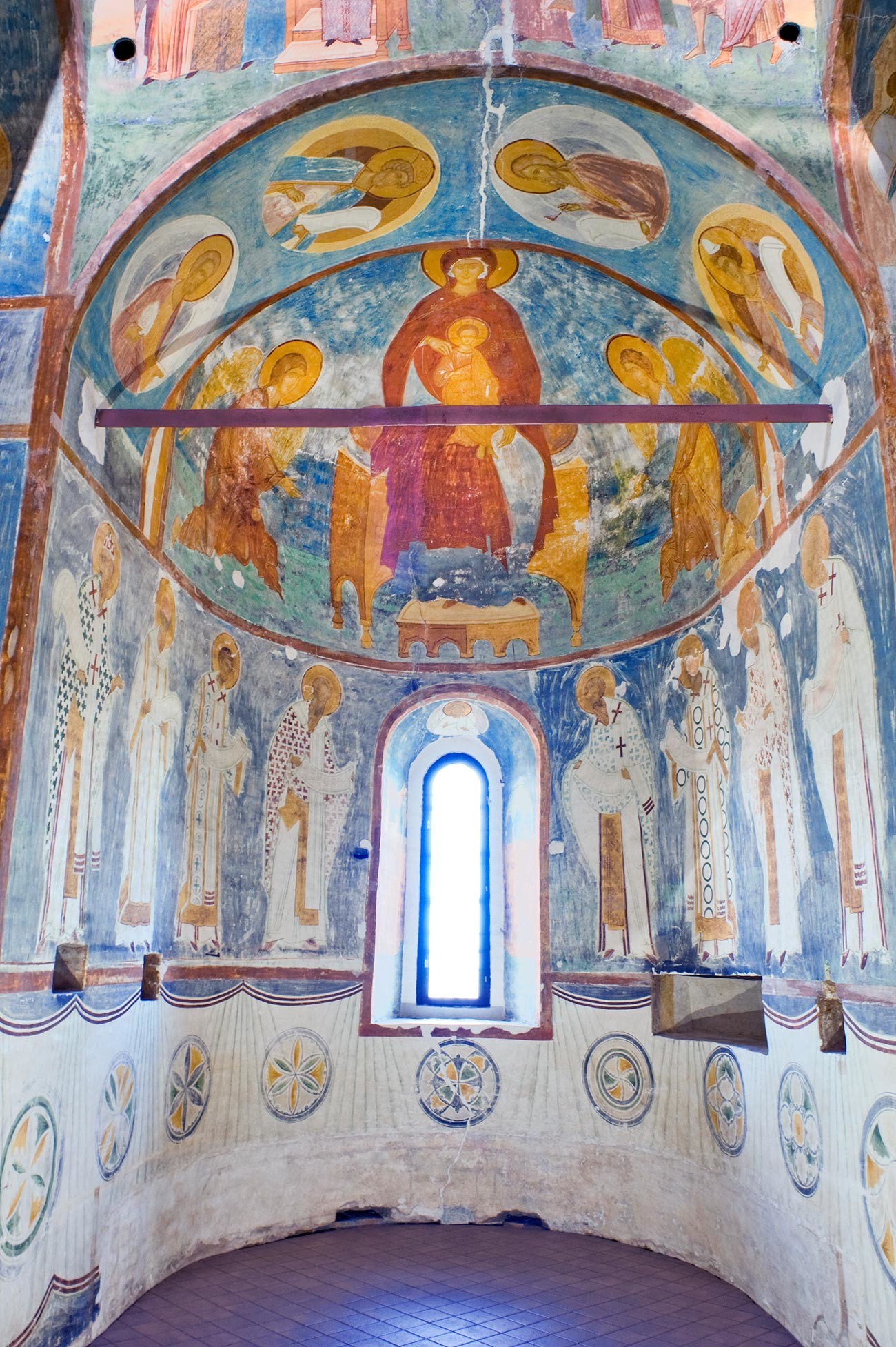 The impetus for the remarkable frescoes also came from Ioasaf, who was a spiritual adviser to Grand Prince Ivan III and a member of the princely Obolensky family. With such connections, he was able to draw upon the services of the renowned artist Dionisy, accustomed to commissions for frescoes and icons from the Muscovite court.

In 1502, Dionisy and his sons Feodosy and Vladimir journeyed to the monastery, where they were able to paint the entire interior in the summer of 1502. (Because of the damp climate, such work was possible only in the summer months.) 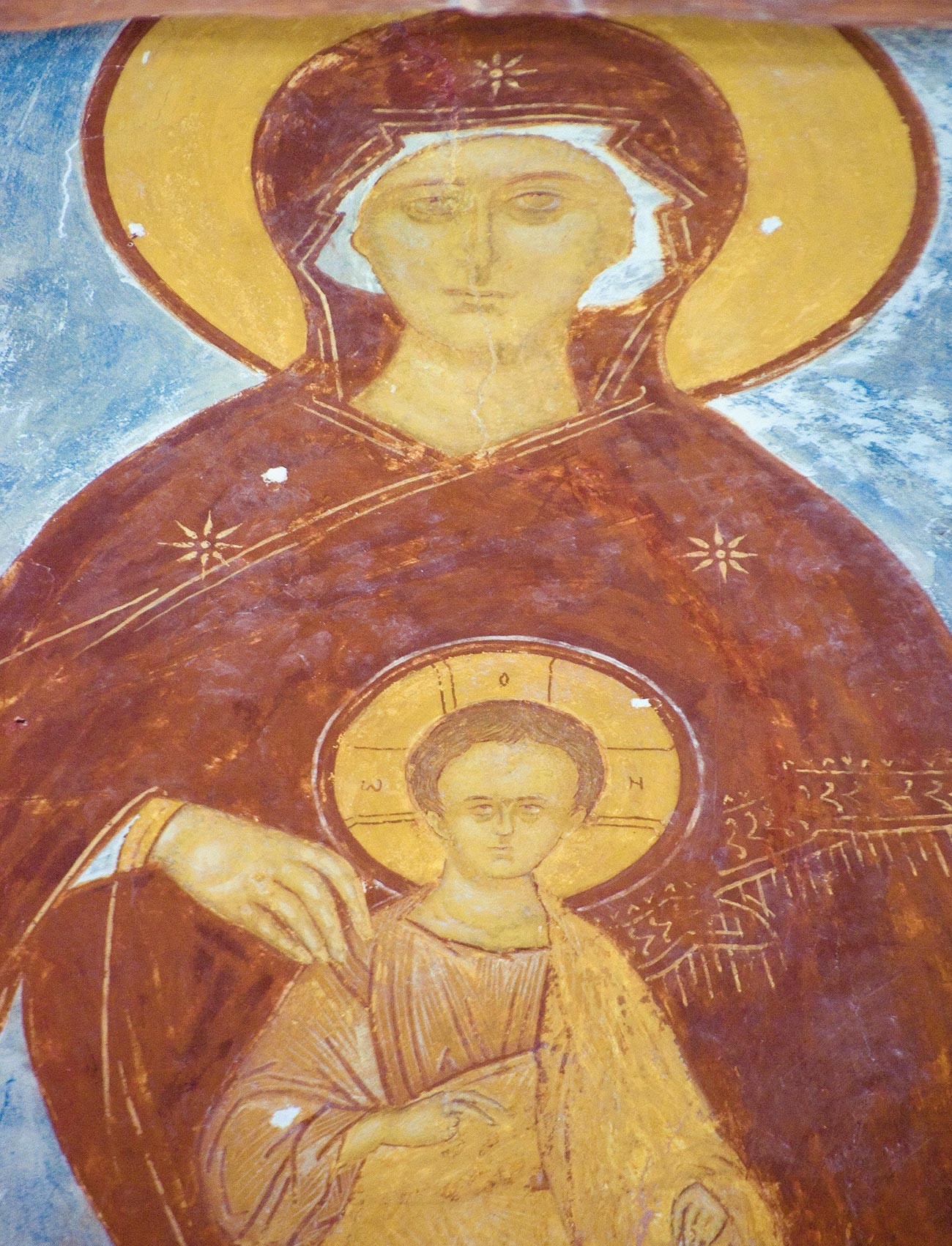 Fortunately, the remote location and small size of Ferapontov Monastery spared the cathedral walls from the repainting typical of more prominent medieval churches. Despite structural damage and periods of political turbulence, the frescoes have survived with only limited losses. The monastery thus provides unrivaled insight into the monumental creativity of Dionisy.

The west (main) entrance consists of a simple perspective portal flanked by frescoes devoted to the Nativity of the Virgin. Archangels Michael and Gabriel guard the portal. Although partially damaged by the construction of a porch and gallery in the 16th century, the entrance frescoes thereby gained protection from the severe climate. Their surfaces still retain a rich palette of colors. 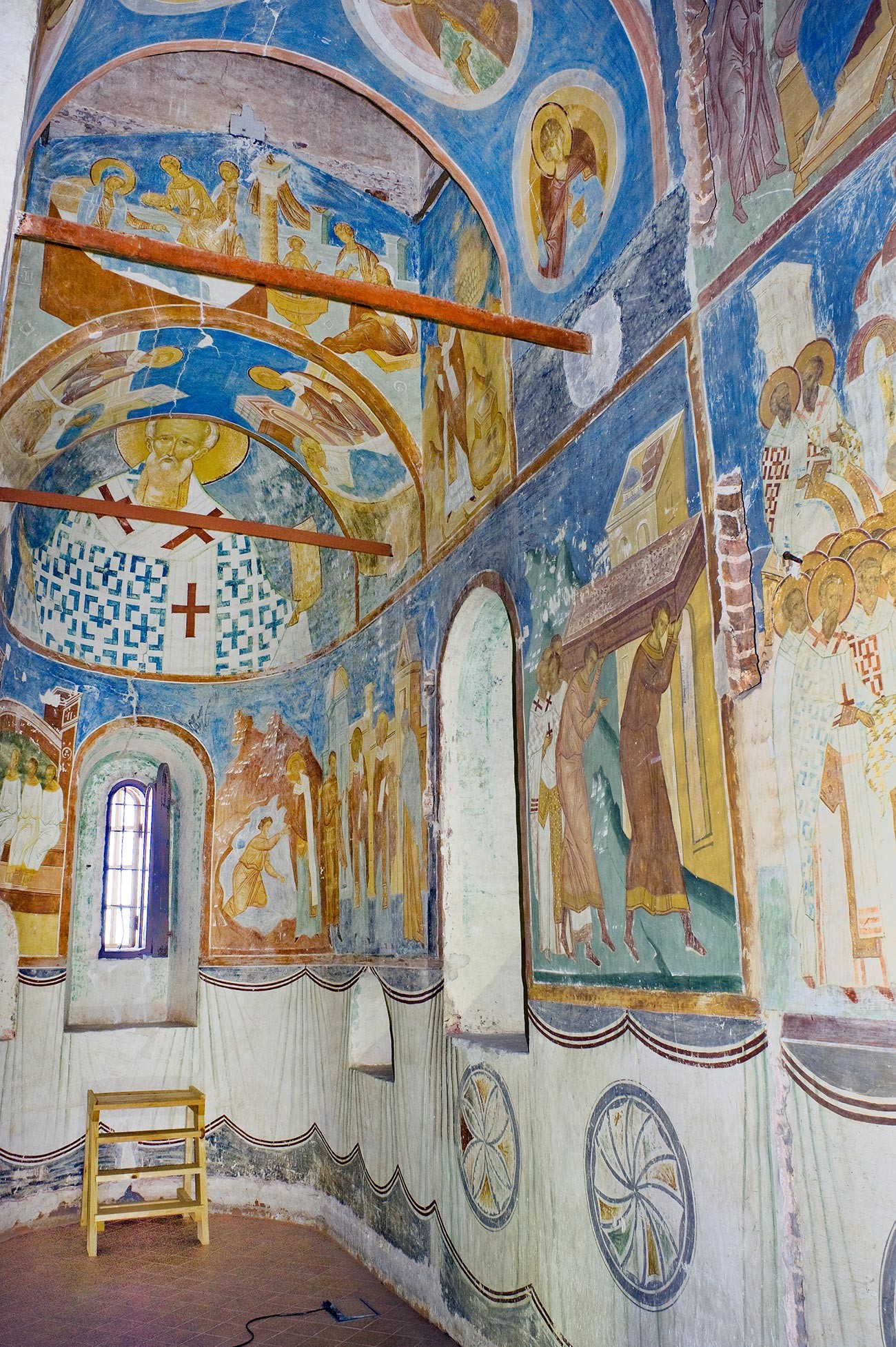 On entering the Church of the Nativity of the Virgin we see a compact space whose walls are completely painted. The volume is defined by four piers, which support a single cylinder (or "drum") and cupola. Iron tie rods connect the upper parts of the main structural elements. On a bright afternoon, the interior is suffused with color.

The Ferapontov paintings are radiant in their warmth and the expressiveness of their figures. Legend has it that Dionisy derived the pigments for his water-based paints from stones found at Lake Borodava. It is more likely that he brought from Moscow materials of the highest quality, supported by the largesse of Ioasaf and perhaps the court itself.

A vision of heaven on earth 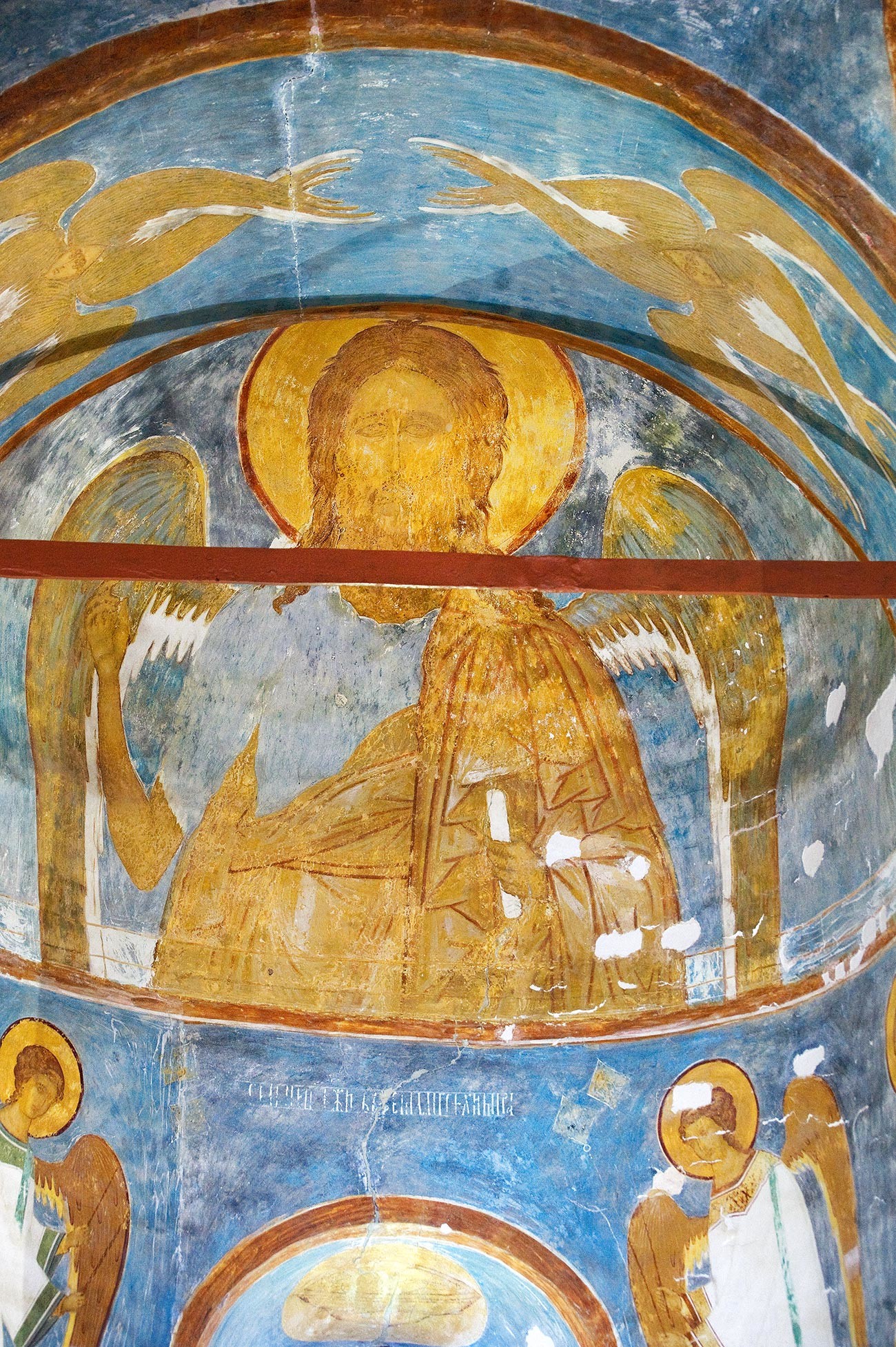 Cathedral of Nativity. North apse with fresco of John the Baptist, Angel of the Desert. June 1, 2014

As befits the dedication of this church, most of the frescoes are devoted to Mary. The great Akathistos cycle of liturgical hymns to the Virgin is comprehensively depicted and includes miracles and other events in her life. The entire fresco ensemble is a work in praise of Mary.

There are also images of archangels, saints, and church fathers on the piers and arches. The lower tier of the north and south walls includes a depiction of the Seven Ecumenical Councils, which affirmed the doctrine of the Trinity. 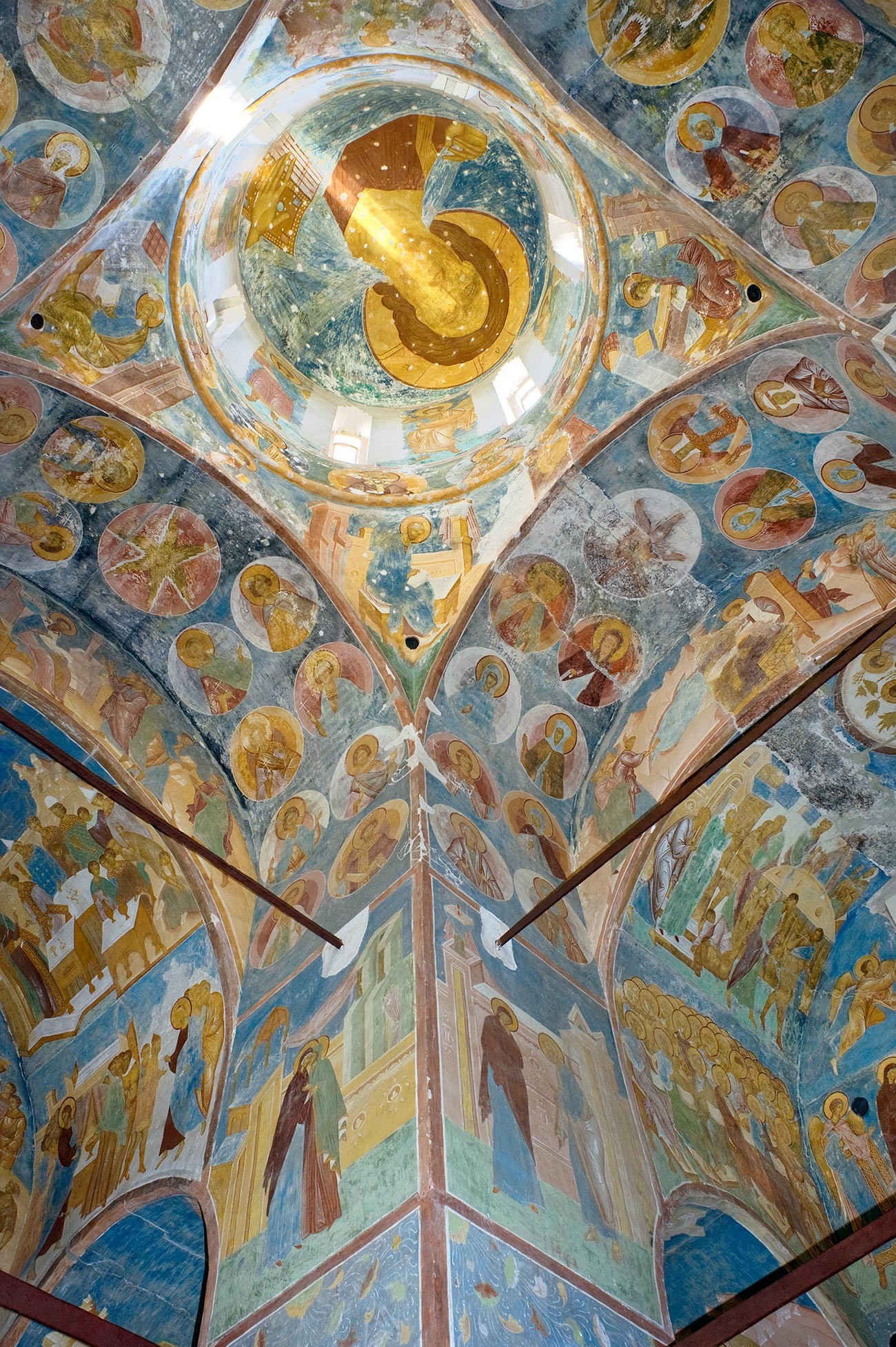 Cathedral of Nativity. Dome with image of Christ Pantokrator. Left: southwest pier with scenes from the Great Akathist (hymn to Virgin Mary). June 1, 2014

Soaring above the interior, the dome contains the mysterious image of Christ Pantocrator ("Ruler of all"), a feature typical of Russian Orthodox churches. Archangels appear in the cylinder beneath the dome, together with medallions depicting patriarchs from the Book of Genesis. Images of the four evangelists are portrayed on the triangular pendentives at the base of the cylinder. This central space is surrounded by a constellation of medallions with saints.

In the east is the most sacred part of the structure, the apse. The main bay, which contained the altar, is centered on a vibrant fresco of the enthroned Virgin Mary with the infant Jesus seated on her lap. The north (left) bay contained the prothesis, where the sacraments were blessed. At its top is John the Baptist, Angel in the Wilderness. The south bay contained the diakonikon, with the priests' vestments. It culminates in the intent gaze of St. Nicholas. 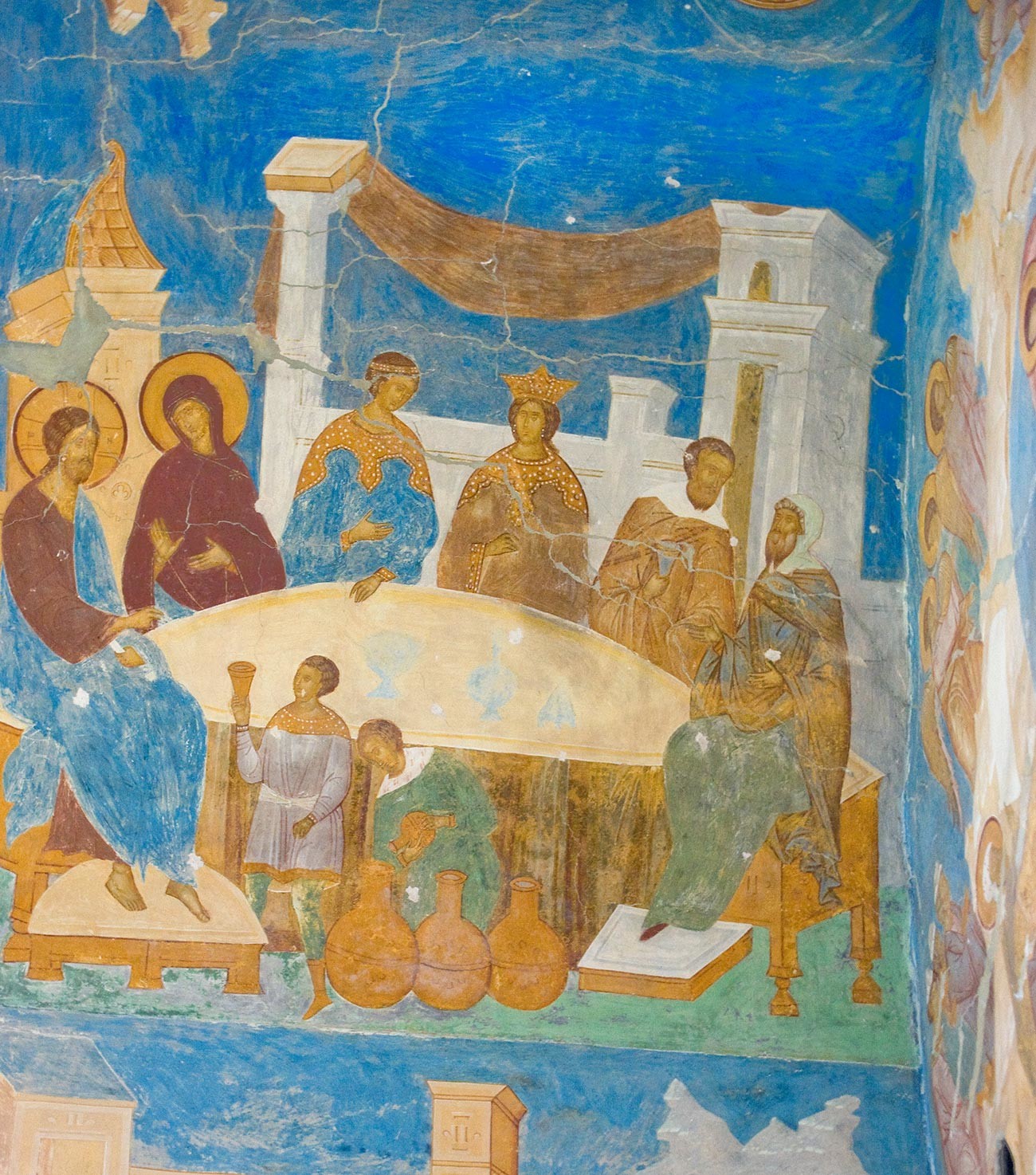 Cathedral of Nativity. South wall, vault arch, left side. Fresco of Christ at the Wedding in Cana. June 1, 2014

The west wall contains a partially preserved "Last Judgment." The central elements, including Christ Enthroned, were lost to ill-conceived structural changes in the 18th century. Despite this loss, the preservation of these sublime frescoes must be considered one of the miracles of Russian art. 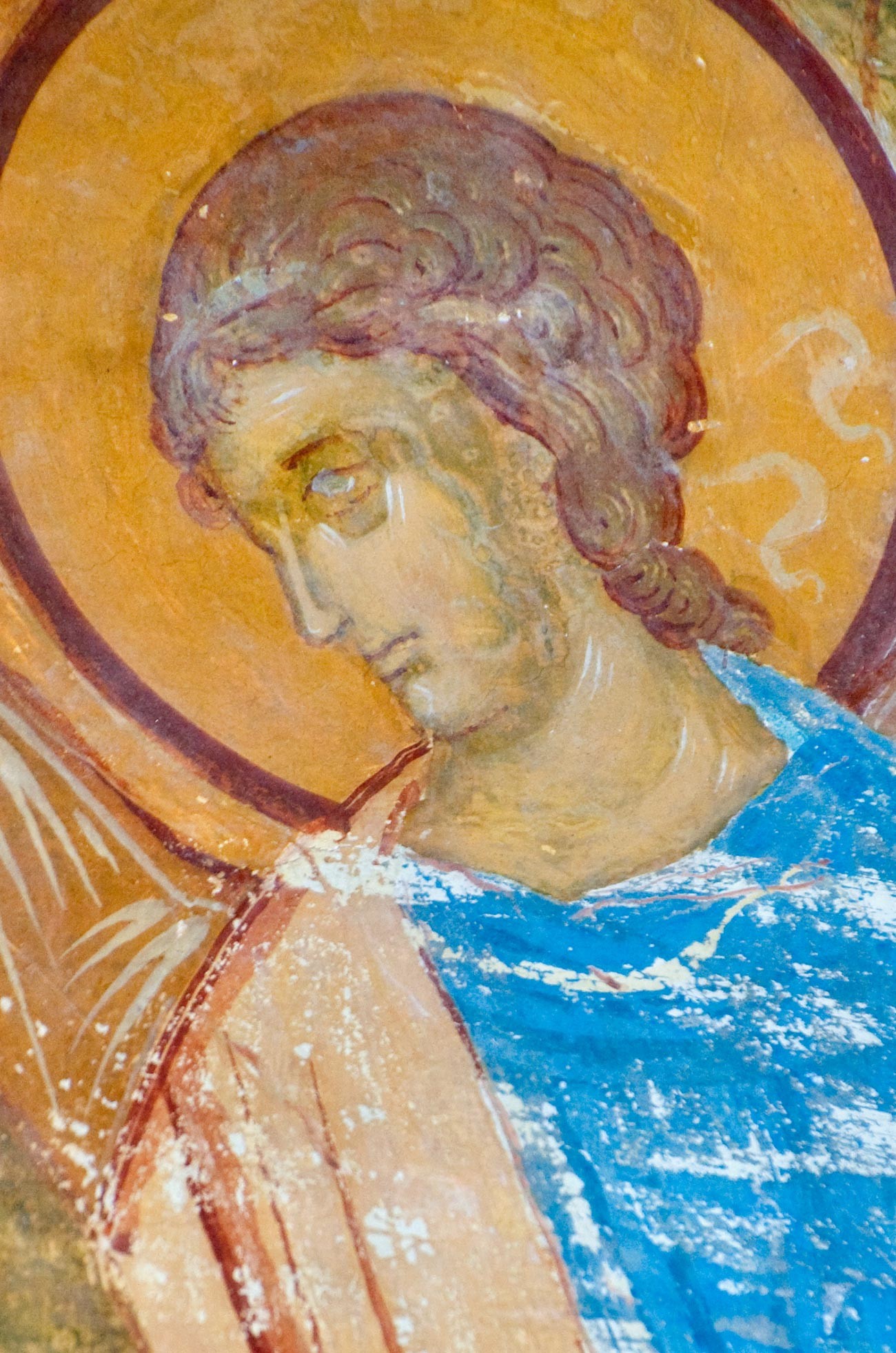 The Ferapontov Monastery continued to flourish in the 16th century with the addition in 1530-31 of a brick refectory and church dedicated to the Annunciation, as well as a large building for the monastery’s archives and collection of manuscripts. During his reign (1547-1584), Ivan the Terrible maintained the tradition of royal patronage of the monastery.

With the end of the Rurik dynasty in 1598 and the sudden death of Tsar Boris Godunov in 1605, Russia endured a catastrophic dynastic crisis known as the Time of Troubles during which invading forces and large bands of marauders devastated the heartland. Even the establishment of the Romanov dynasty in 1613 failed to quell disorder in much of the country.

Although the well-defended Kirillov Monastery withstood several attacks, the smaller Ferapontov Monastery was sacked by a Polish-Lithuanian force in 1614. Fortunately, much of the monastery treasure was hidden, and the cathedral frescoes survived, but economic recovery occurred slowly because of the widespread destruction of surrounding villages. 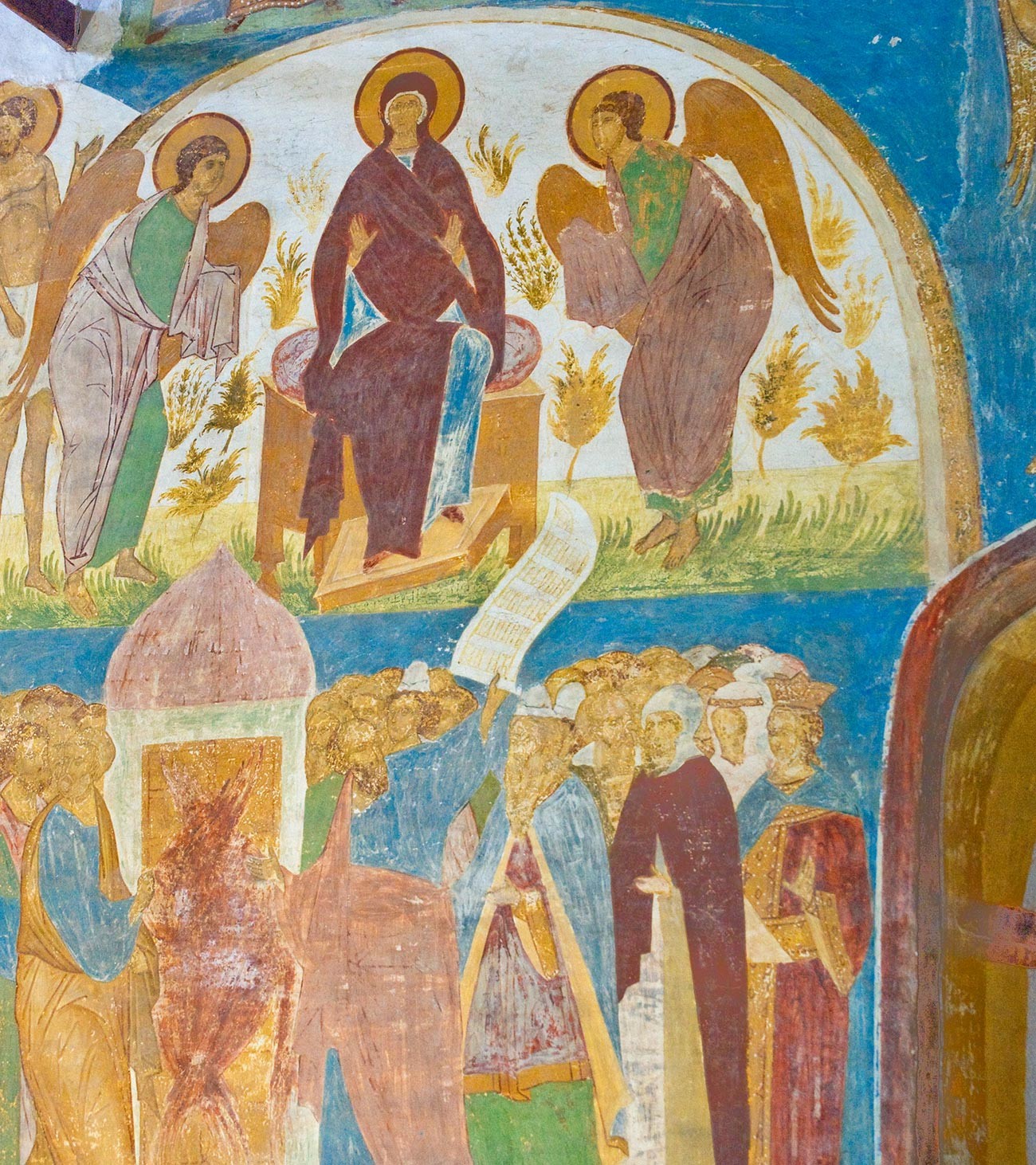 In 1640 a brick church dedicated to St. Martinian (successor to St. Ferapont) was erected at the south wall of the Nativity Cathedral. Its distinctive "tent" tower provides a vertical point for the central ensemble, which was completed by construction of a brick bell tower and covered gallery leading to the refectory church. The culminating grace point occurred in 1649 with the rebuilding of the Holy Gate, crowned with twin churches dedicated to St. Ferapont and the Epiphany.

From 1667 to 1676, the monastery served as the place of exile for the former Patriarch Nikon, who was stripped of his authority by a church council in 1666. At the same time, the monastery underwent a prolonged economic decline culminating in 1764 with the loss of revenue-producing property following Catherine the Great’s secularization of monastic land holdings. The 1798, the impoverished monastery was closed, and its churches were converted to parish use. 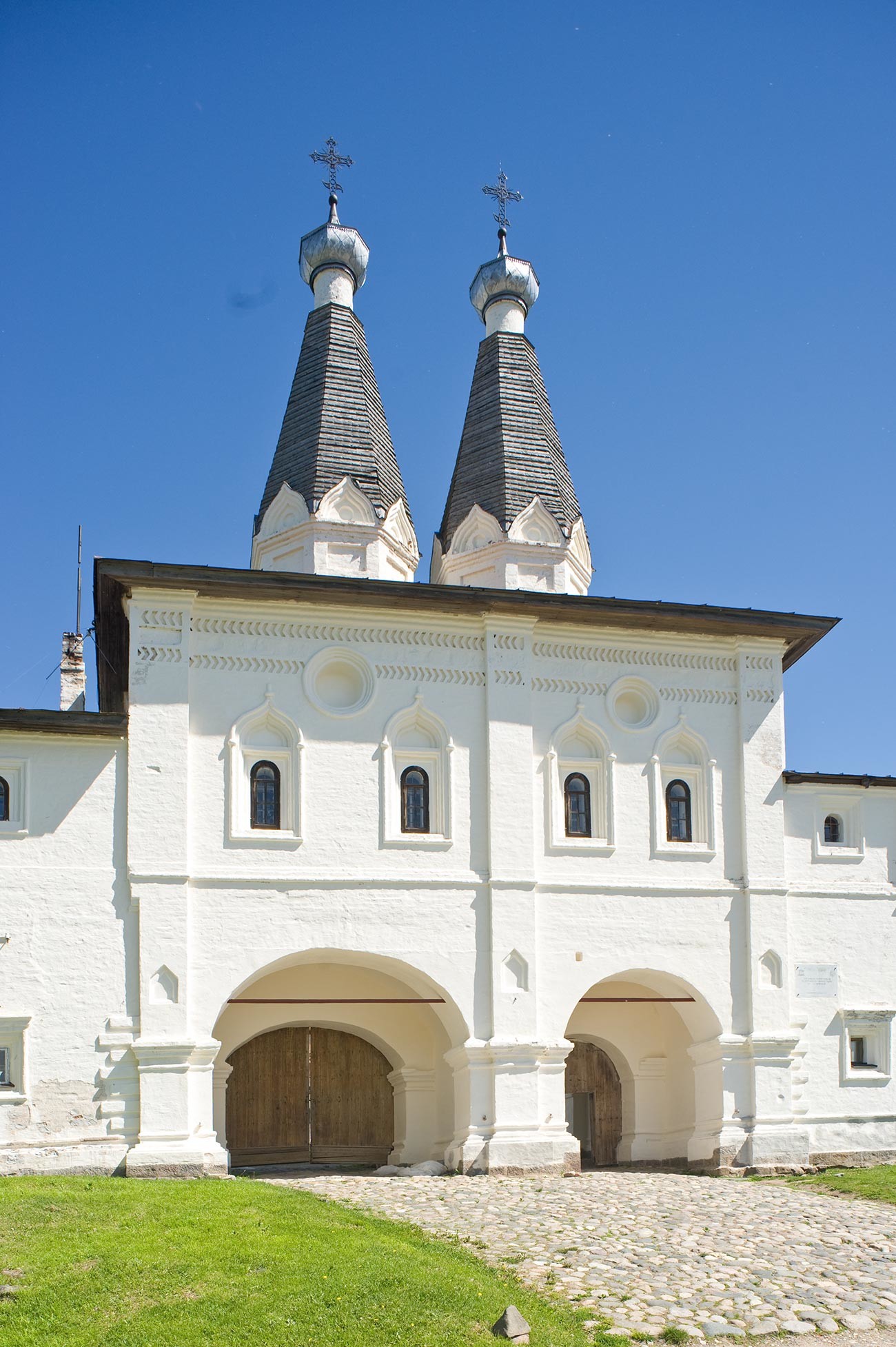 Without necessary maintenance, the architectural ensemble was threatened with irreversible damage. Its plight was brought to public attention by Ivan Brilliantov, son of a local priest from neighboring Tsypino. Because of his scrupulous work studying the architecture and frescoes, the monastery was reconsecrated as a convent in 1903 under the direction of Abbess Taisiya, one of Russia’s most venerated monastics at the turn of the 20th century.

In 1925 the convent was dissolved by Soviet decree, and the churches converted to parish use until their closure in 1936. Tragically, Ivan Brilliantov was arrested and shot in 1931 during an early purge against specialists in local history—something that seems incredible even by the standards of the time.

At least the monastery buildings were conserved as major work of art - in large measure based on Brilliantov’s pioneering efforts. In 1975 the site was designated a state museum, and in 1989 the gate churches were reopened for a local parish. Since that time the buildings have been repaired, and the frescoes have been the object of decades of careful study and restoration.

The sacred territory is now shared by the museum and the Russian Orthodox Church. All things considered, the preservation of the Dionisy frescoes at Ferapontov Monastery must be considered one the great miracles of Russian cultural history. 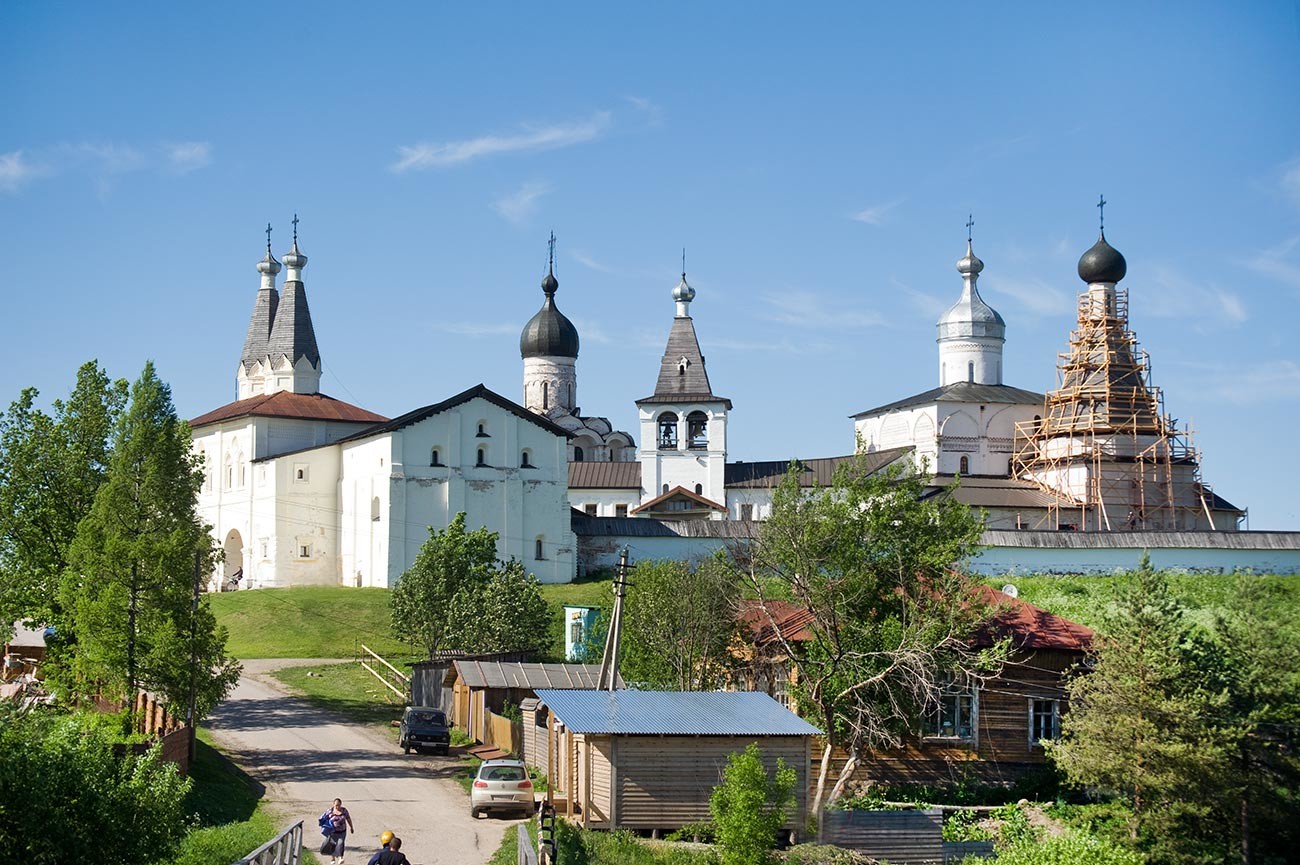