The magnificence of Russia's Baroque churches 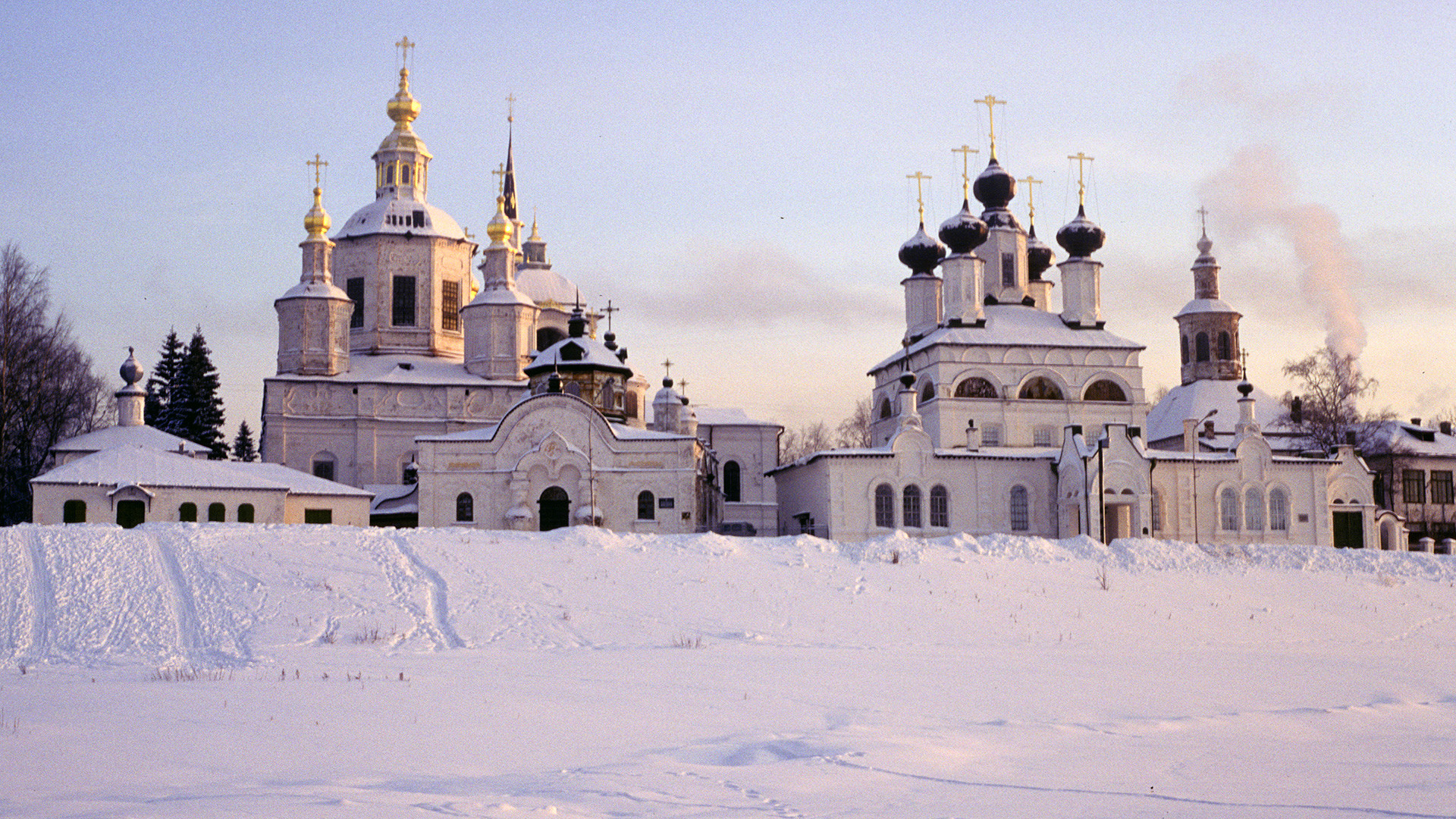 Smolensk, on Russia’s western borderlands near Poland, is one of the country’s ancient cultural centers. In summer 1911, Russian chemist and photographer Sergey Prokudin-Gorsky visited Smolensk to document sites connected with the 1812 Napoleonic invasion. 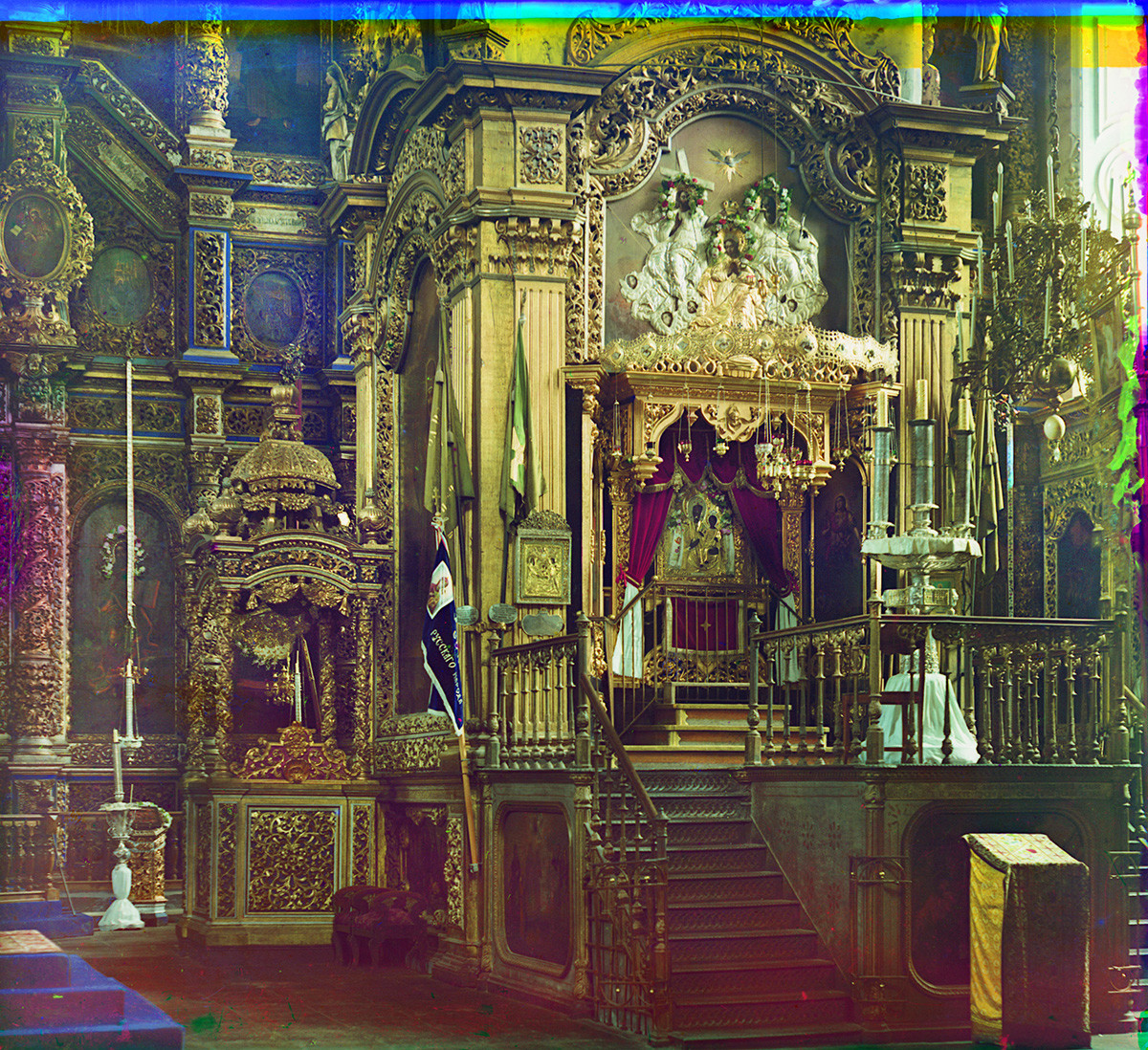 The main work, however, was done in the 1730s and 1740s, when the cathedral acquired its present form, strongly influenced by the Ukrainian Baroque. The baroque style is particularly evident on the interior with a magnificent icon screen, whose carved, glided frame and tiers of icons were created by a group of artists and craftsmen headed by the Ukrainian master Sila Trusitsky. The interior was further enhanced by the creation in 1743-46 of elaborately carved baldachins and icon cases (kiot) situated near the icon screen and at the base of the cathedral’s mighty piers. 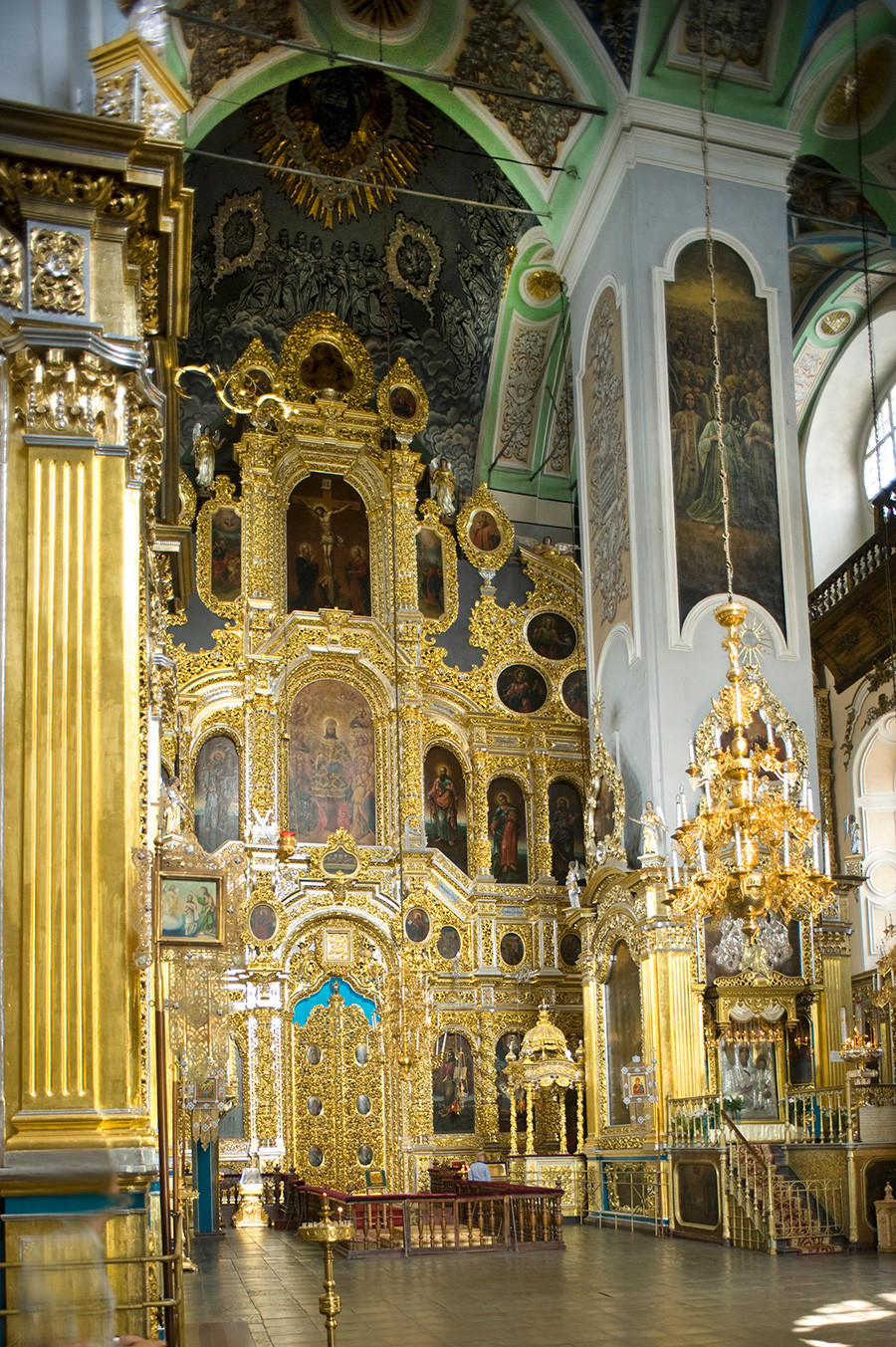 Prokudin-Gorsky recorded the cathedral exterior as well as the interior, where he photographed its sacred shrine — the Smolensk Icon of the Mother of God. That photograph has acquired exceptional importance, not only because of its technical challenges (a shadowed interior with only natural light) but also because the icon disappeared at some point during the two years of German occupation during World War II, from mid-July 1941 to late September 1943.

A portion of the first tier of the magnificent icon screen is visible in the background of Prokudin-Gorsky’s photograph. My photographs, taken in 2006 and 2014, convey a sense of the grand scale of the iconostasis.

A northern interpretation of a European style 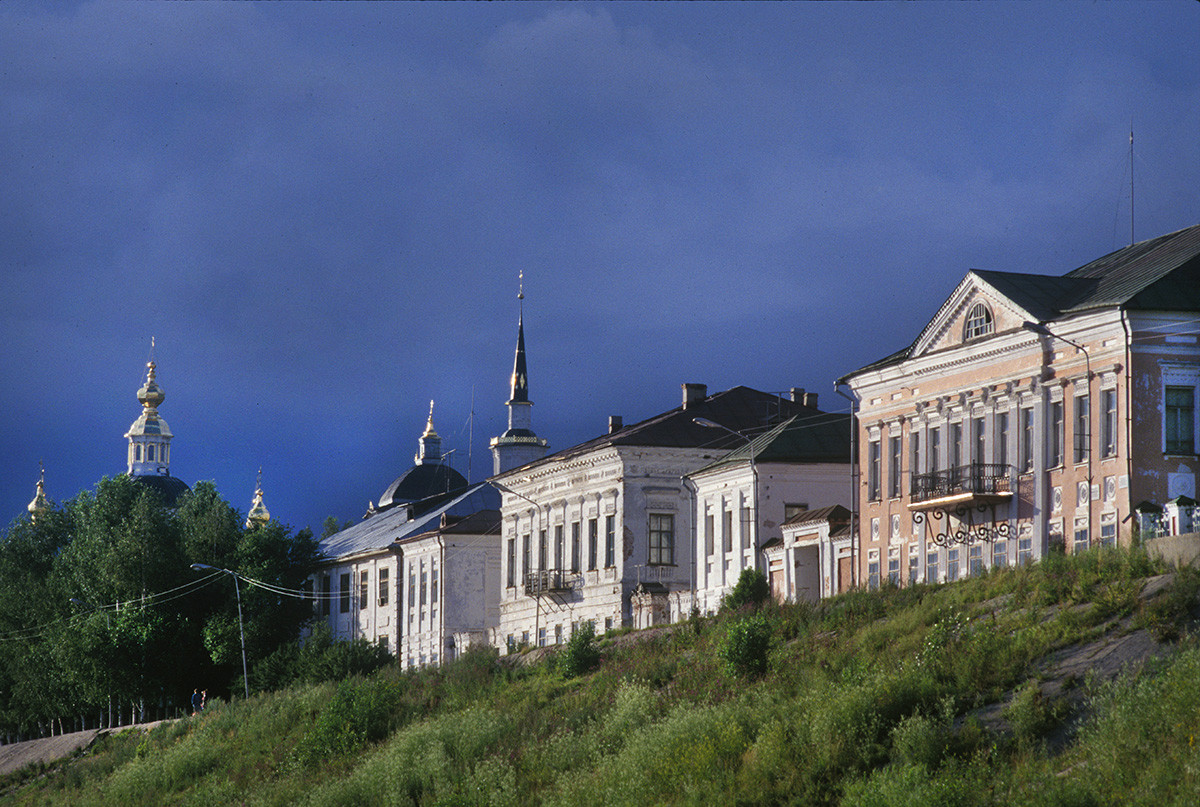 Smolensk is not the only Russian town with distinctive examples of the 18th-century baroque. Nowhere is this culture better preserved than in the town of Veliky Ustyug (Great Ustyug) in the Russian North. Located on the left bank of the Sukhona River, the town combines a rich ensemble of historic architecture with a natural setting of remarkable beauty. 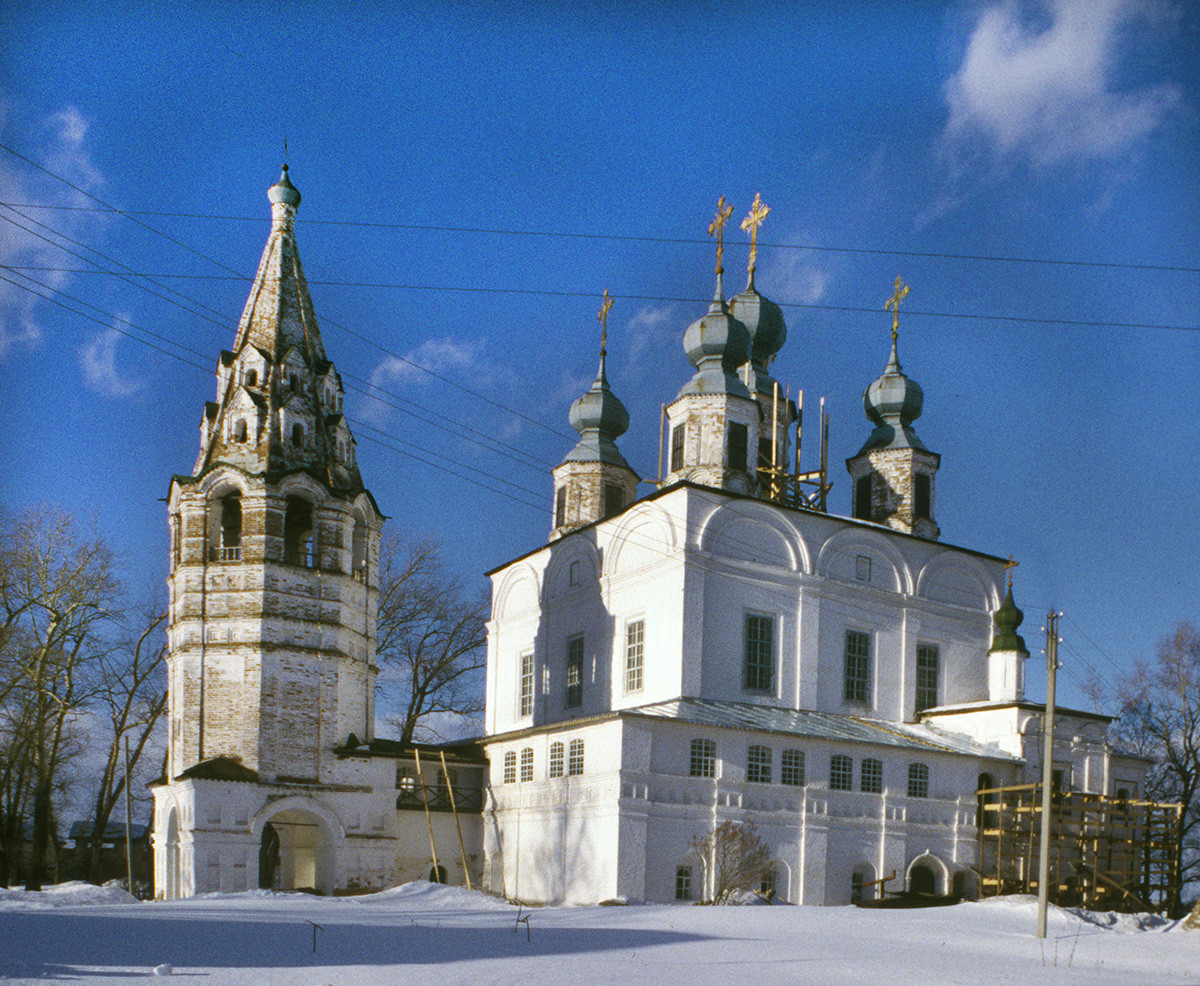 Just across the river is the Trinity-Gleden Monastery, whose main church contains an enormous icon screen that is one of the great works of baroque religious art in Russia. Statues of angels, putti and divine figures hover around elaborately carved frames for dozens of icons painted in the style of the Italian Renaissance. 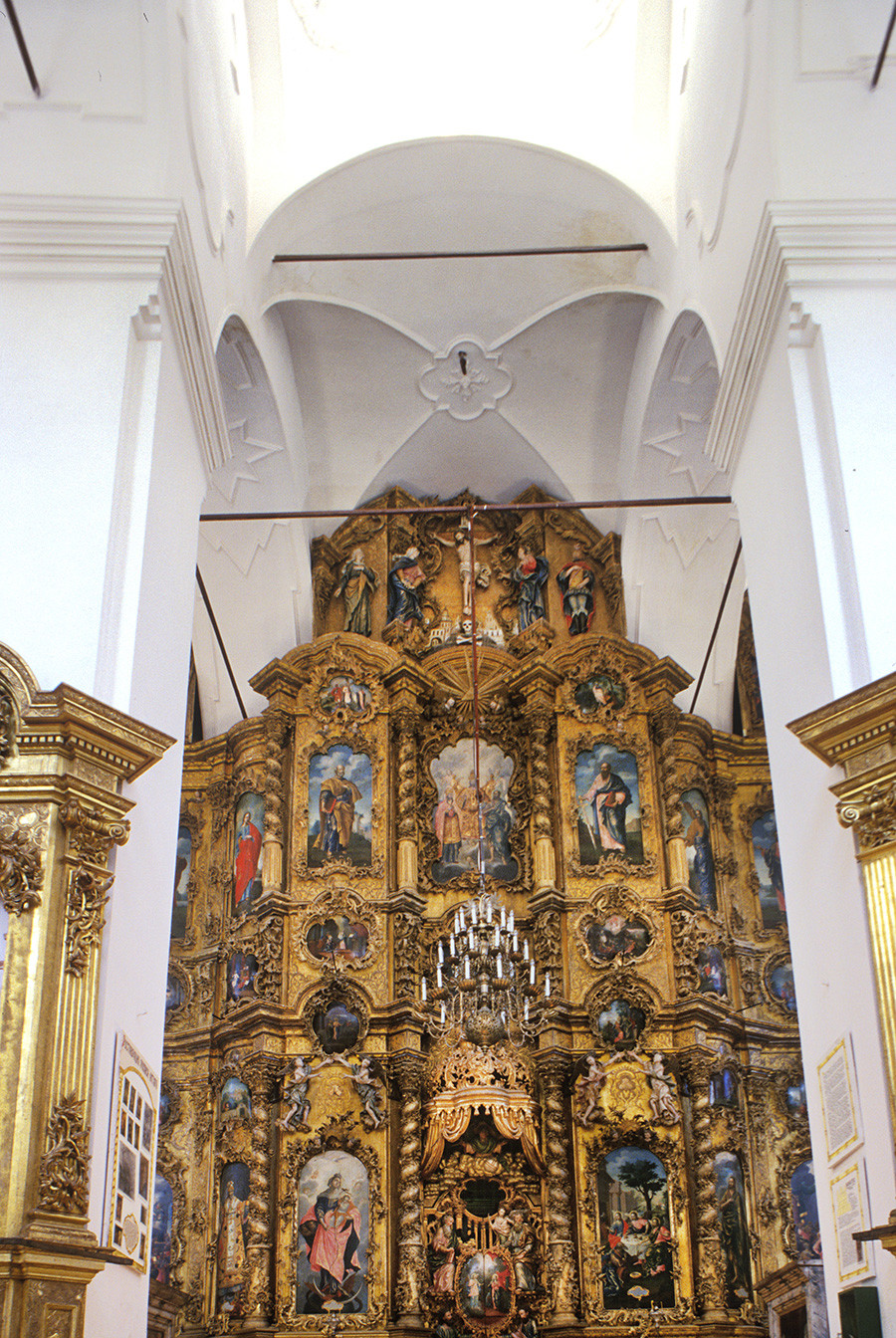 This miraculous display originated in the wealth of local merchants who made substantial donations to Ustyug’s monasteries. Although the development of St. Petersburg in the 18th century lessened Ustyug’s significance in transportation and trade, the town continued to prosper as a regional mercantile center. Ustyug was also highly regarded for crafts such as leather and metal working, as well as the production of fine enamel objects. 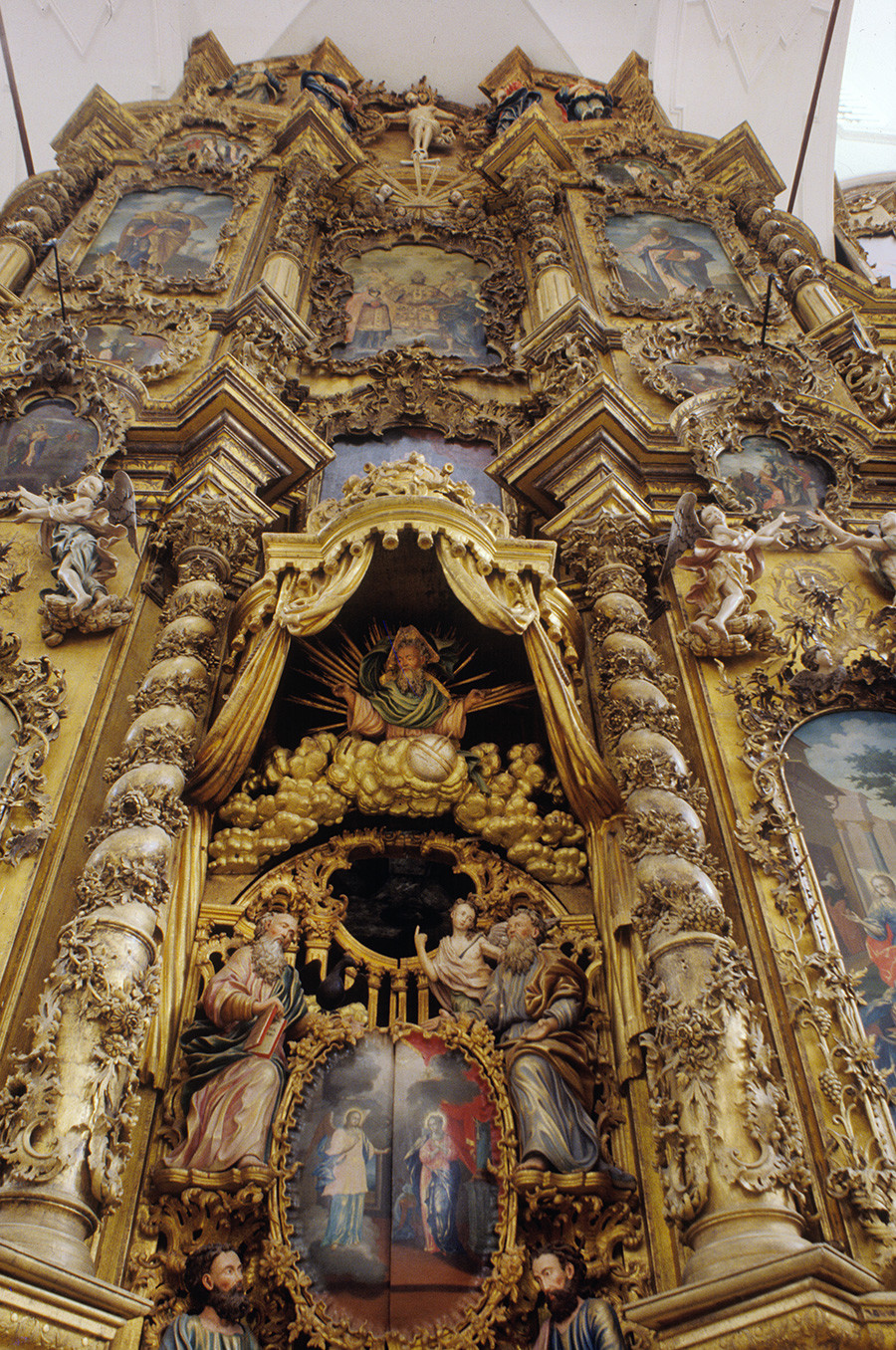 Its silversmiths in particular developed specialized skills in the niello technique, and their work was in demand not only in the north but also in St. Petersburg, including at the imperial court. These commercial ties led to a familiarity with the lavish decorative forms of 18th-century religious art. As a result, Ustyug’s major monastery churches had gilded icon screens that display a northern interpretation of the European baroque style.

Sublime example of the baroque 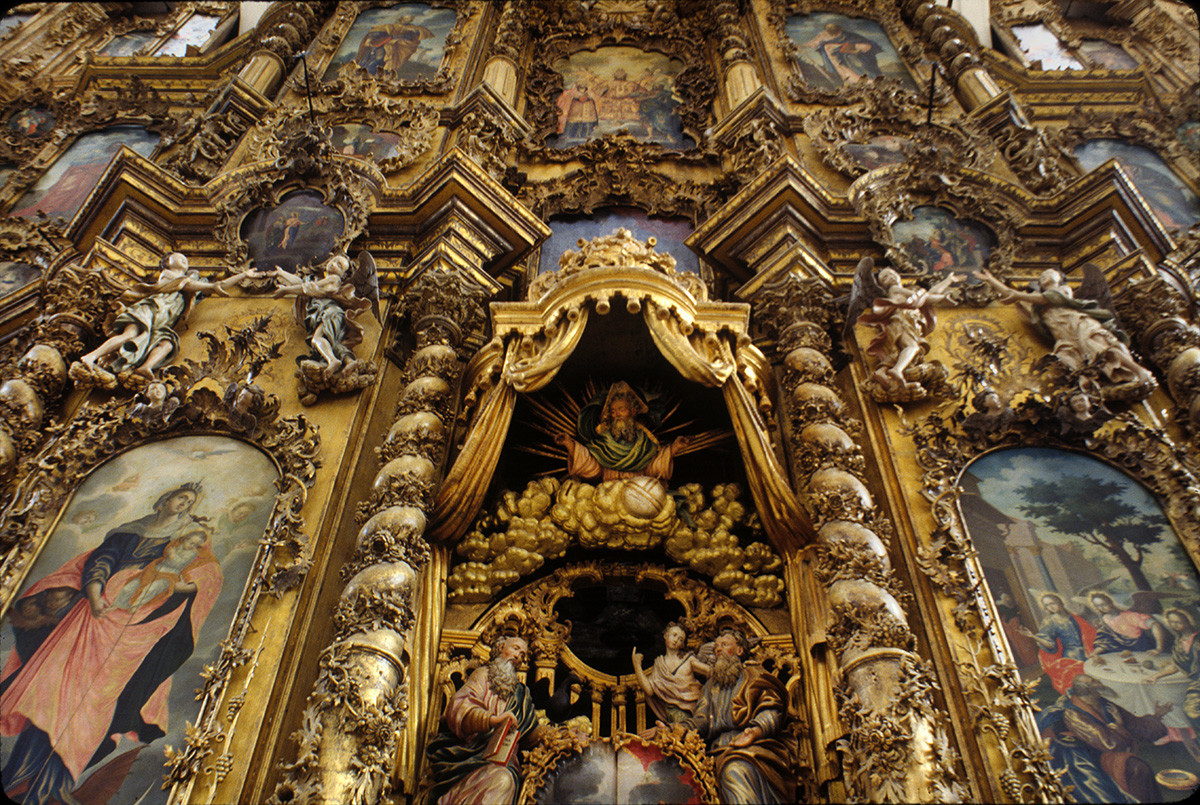 The Trinity Monastery is situated some three miles to the southwest of Veliky Ustyug on the opposite, high bank of the Sukhona.  Established at the ancient settlement of Gleden no later than the middle of the 13th century, the monastery consisted of wooden structures (including three log churches) for the first 400 years of its existence. 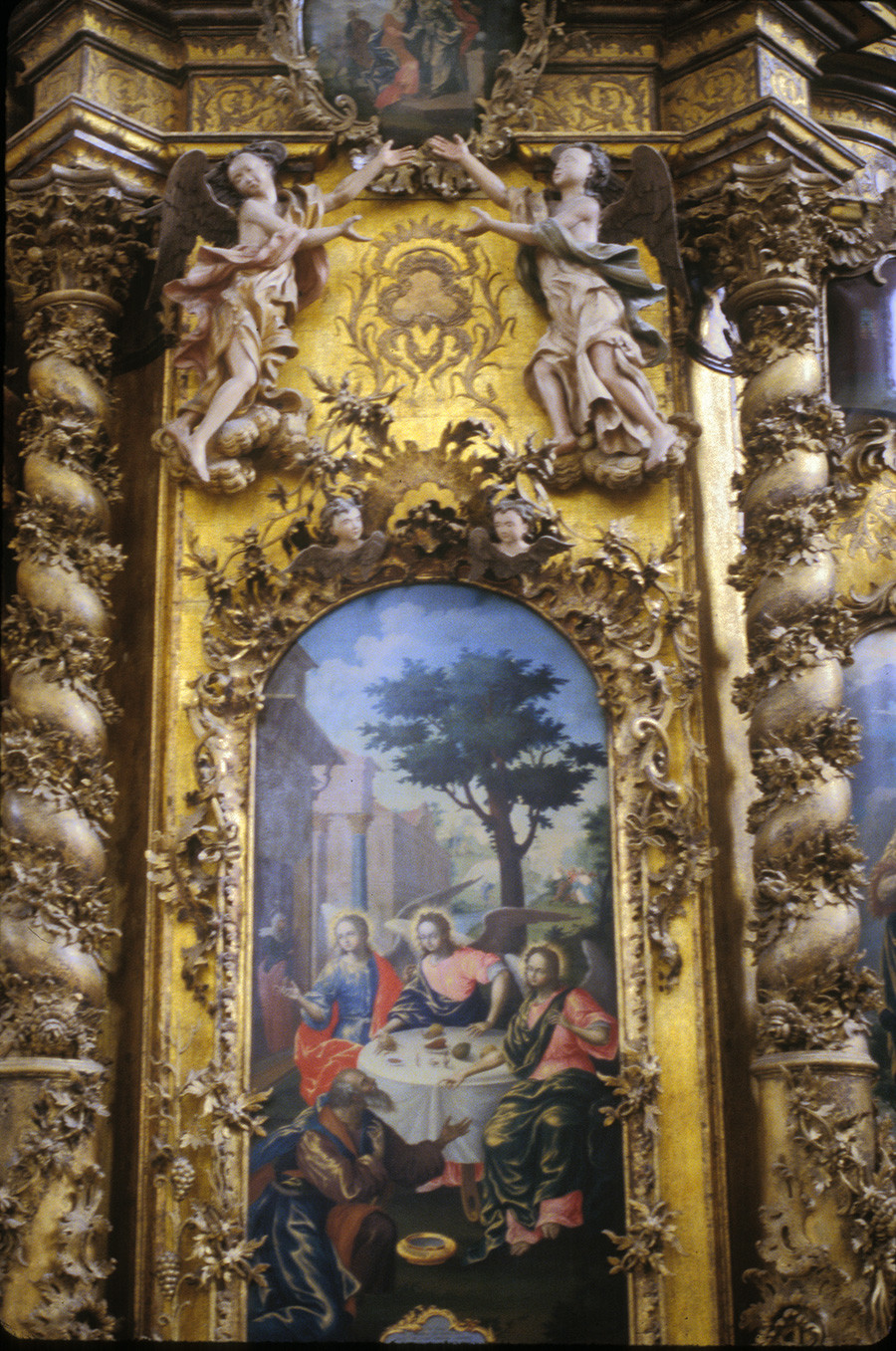 The monastery’s earliest masonry structure was the rebuilt Trinity Cathedral, begun in 1659 with donations by Sila and Ivan Grudtsyn, who were among Ustyug's wealthiest merchant families. Financial and legal difficulties after the death of the brothers halted construction for much of the 1660s until 1690.  The structure, with its five cupolas and a separate bell tower in the west, was finally completed at the end of the 17th century. 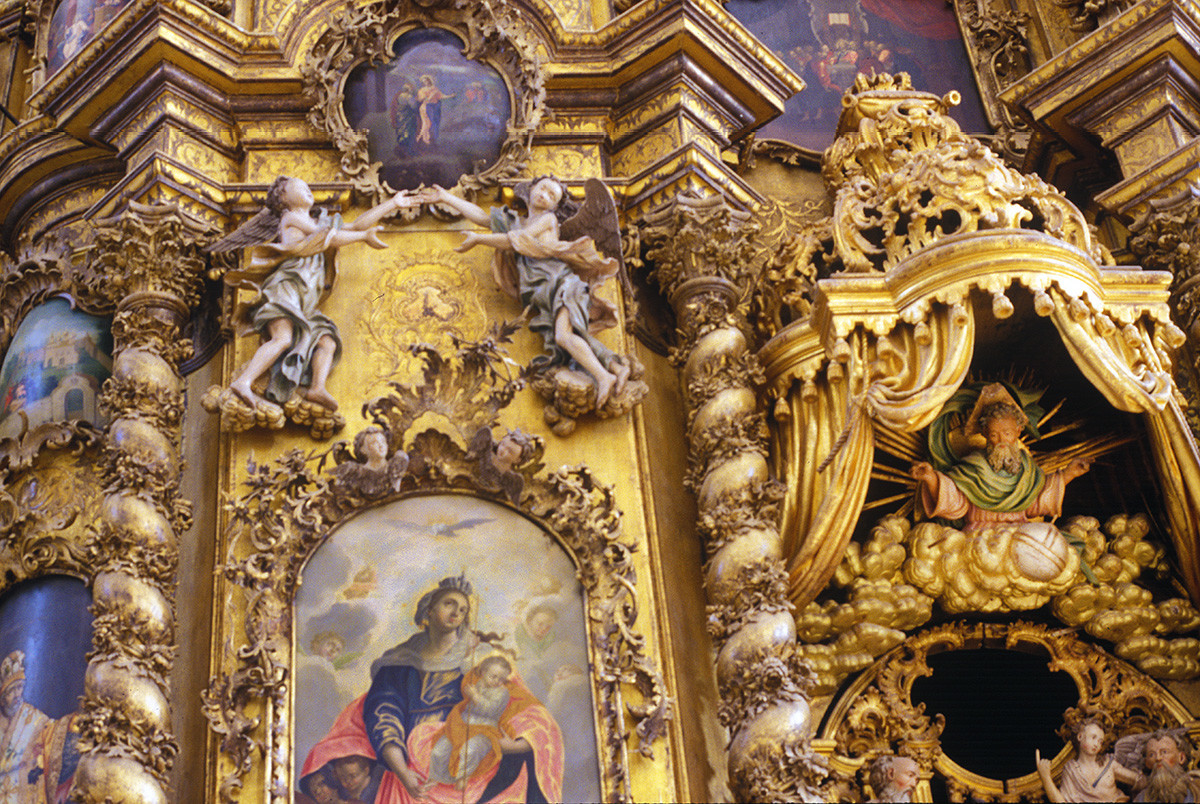 The exterior is imposing, but without the elaborate façade ornaments typical of other 17th-century Russian churches. The appearance of the interior is also restrained, with no frescoes and only two massive piers (instead of the usual four) supporting the ceiling vaults and domes. This balanced structural design allows for greater natural illumination, which brings forth the carved baroque details of the cathedral’s enormous icon screen at the east end of the interior. 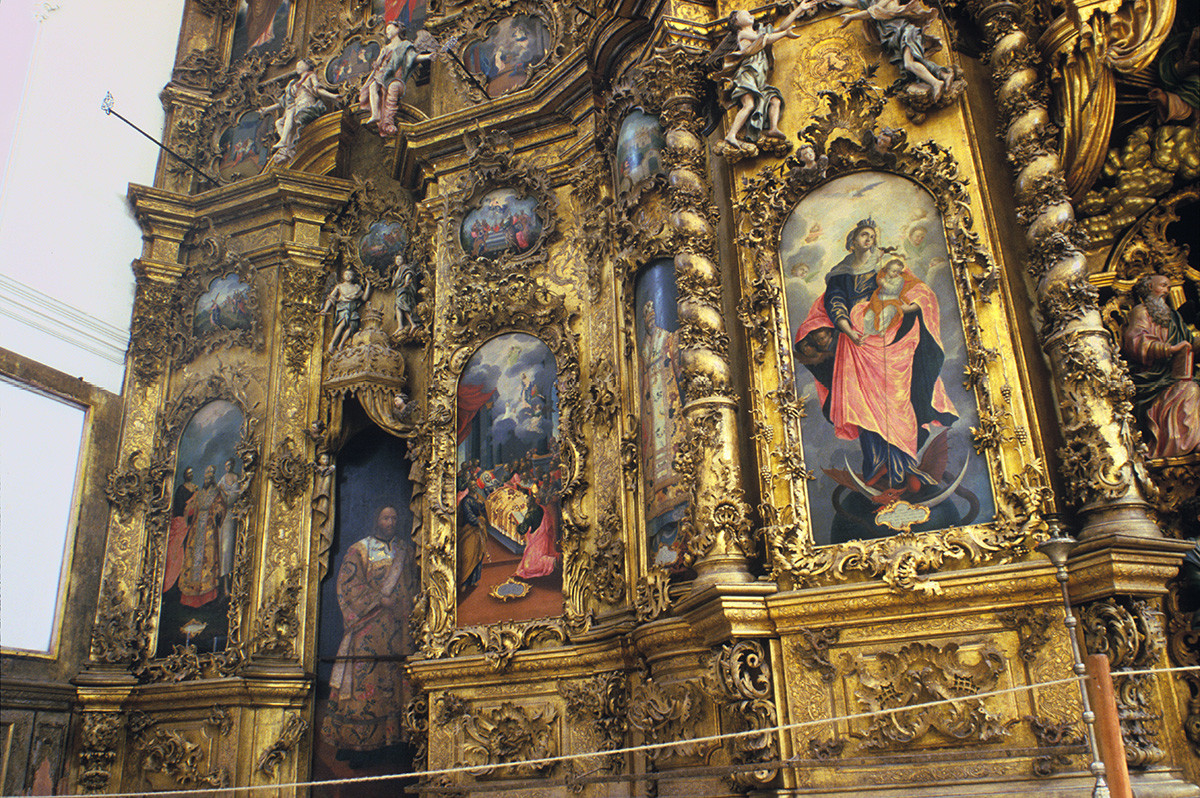 This magnificent creation, framed with five rows of intricately carved and gilded wood, took almost a decade to create, from 1776 to 1784. The soaring wooden structure conceals the altar space in the east and rises to a crescendo at its center, with flanking “wings” on either side. These three parts form a seamless whole, from north to south along the east side of the interior. 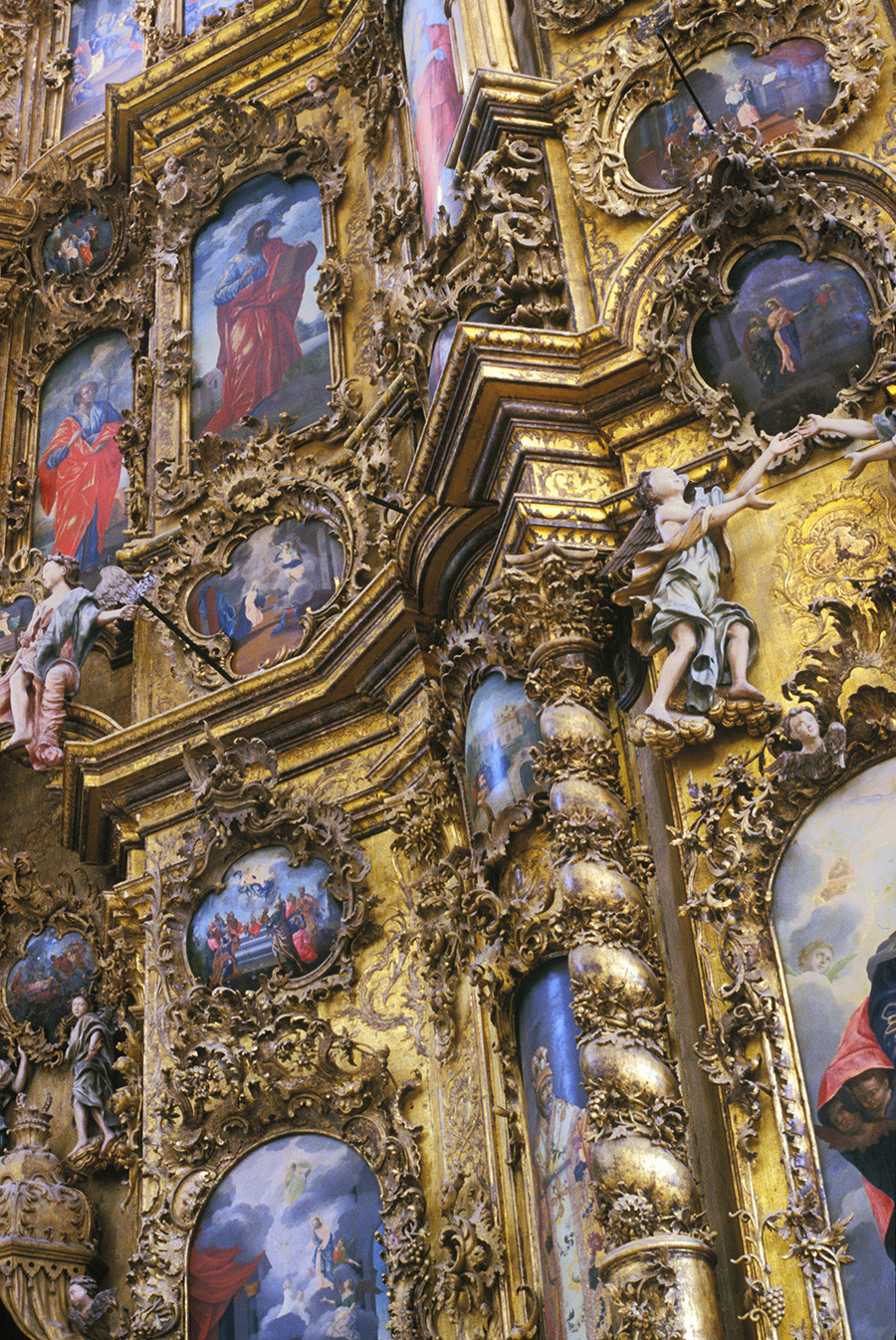 The masterful carving includes extensive statuary that amplifies the church's guiding motif, dedicated to the ministry and Passion of Christ. The style of the icon painting imitates that of Italian masters, particularly noticeable in depictions of the Virgin. To the right of the Royal Gate, which leads to the altar, is a large icon of the Old Testament Trinity, to which the monastery is dedicated. 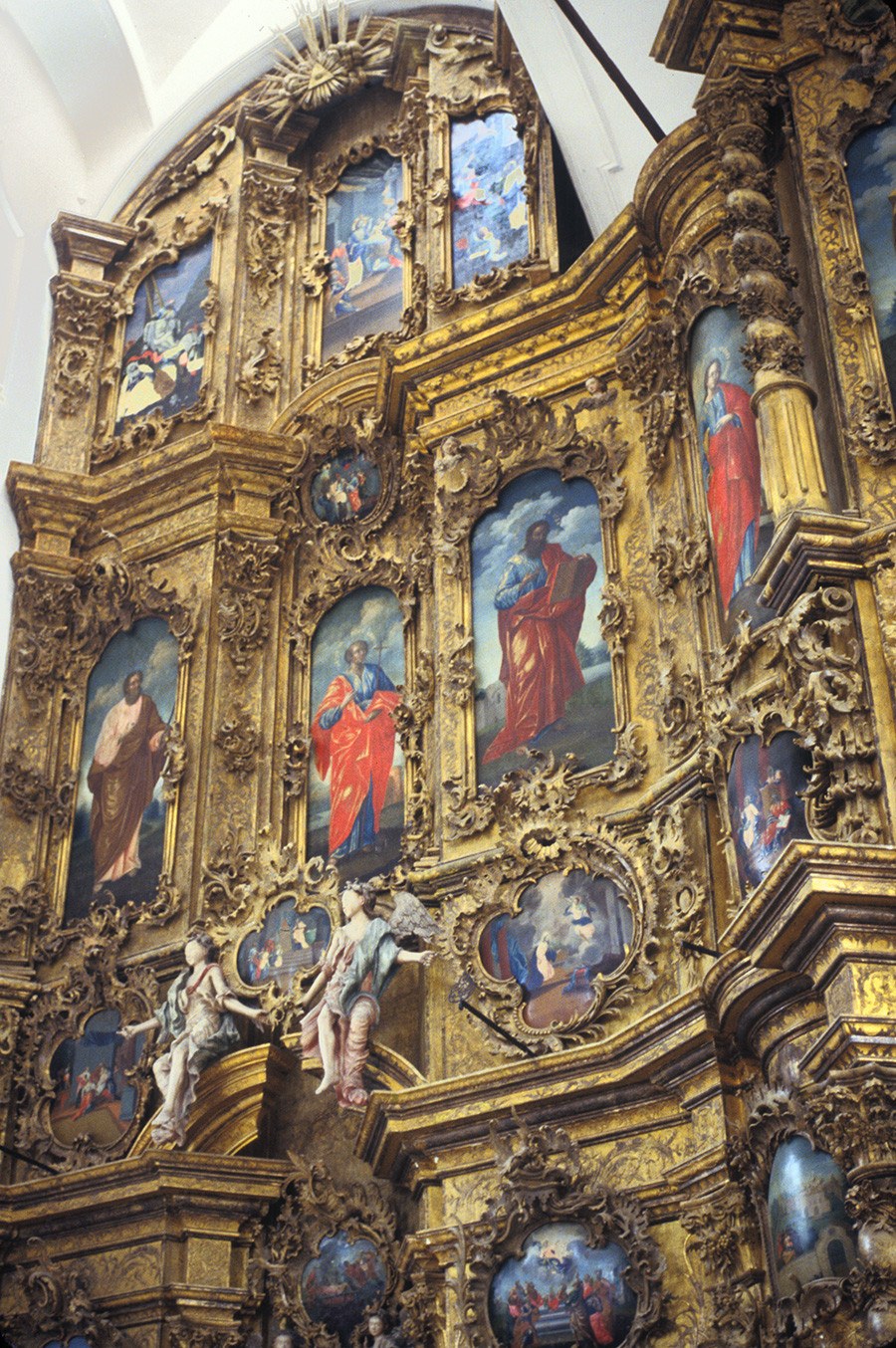 The ultimate source for this combination of florid baroque and classical elements is St. Petersburg, yet numerous other 18th-century Russian churches displayed a similar style. For example, the town of Totma, located on the Sukhona River some 200 kilometers to the southwest of Veliky Ustyug, was known as a center of northern baroque.

Indeed, the contract for the icon screen at the Trinity Monastery identifies the primary master craftsmen as residents of Totma. But even Totma, whose baroque church interiors were barbarously ransacked during the Soviet era, had nothing to compare with the complexity of the iconostasis at the remote Trinity Gleden Monastery. 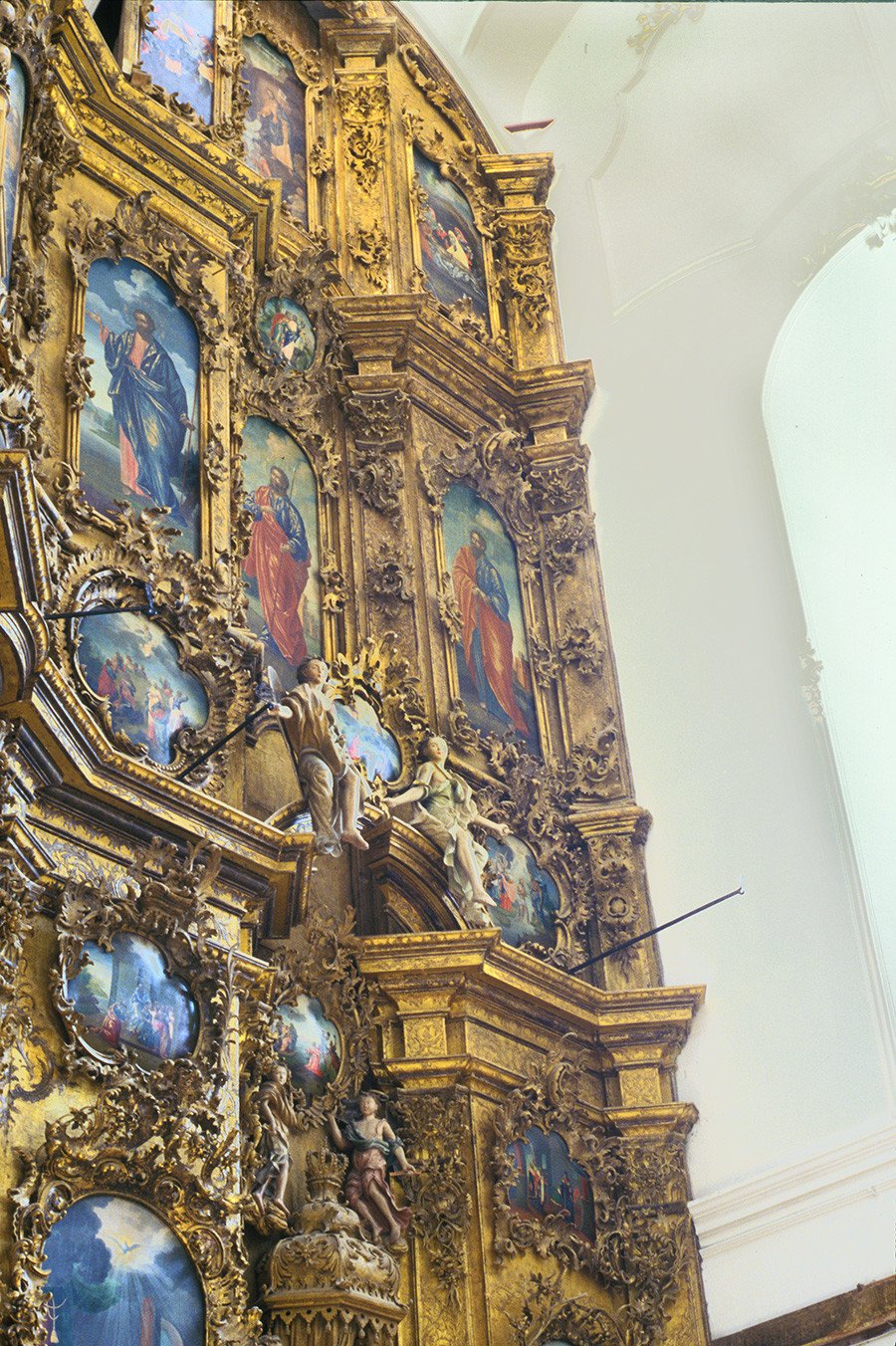 Within the Trinity Monastery's unfinished brick walls there are two other churches: the refectory and Church of the Presentation, completed in the 1740s; and the infirmary Church of the Dormition, built in the 1740s over the monastery’s west gate. 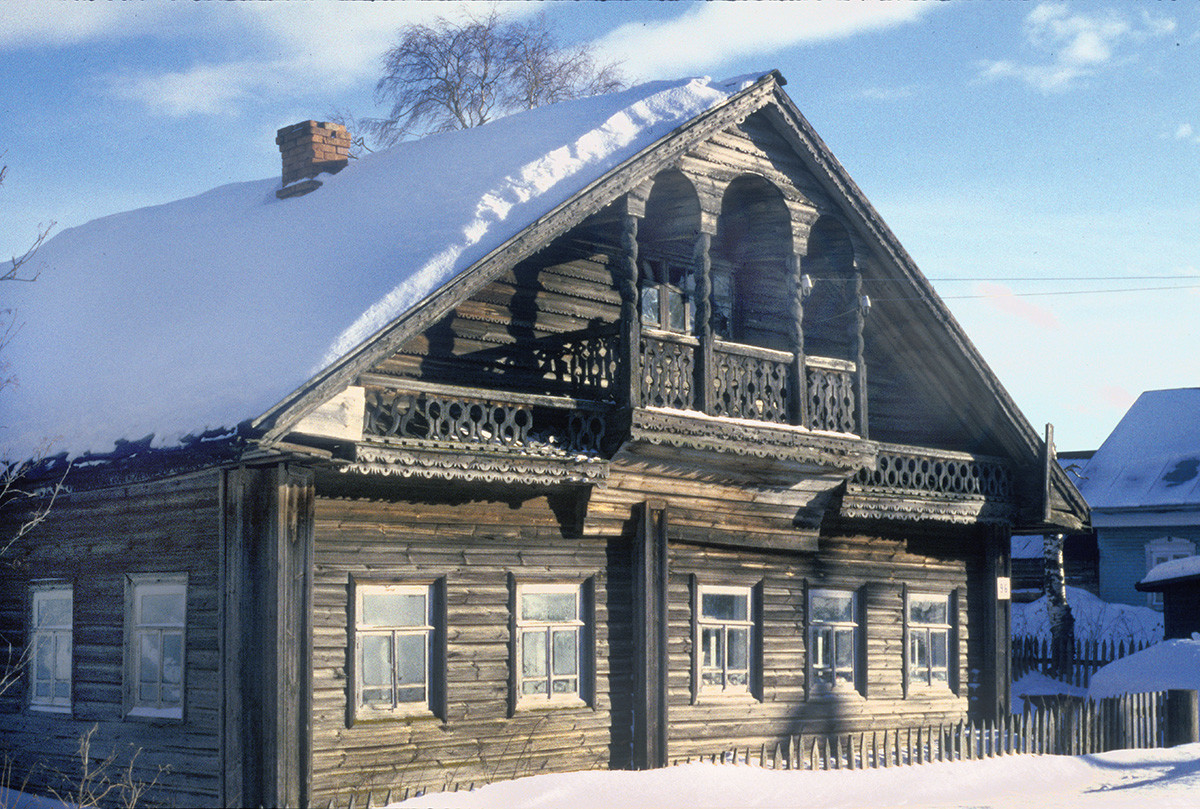 In 1841, the small, secluded monastery with its unimaginably beautiful treasure was closed, only to be reopened in 1912 as a convent. After the Bolshevik Revolution, the nuns existed precariously as an agricultural commune until the convent was disbanded in 1925.

From that point the former monastery served various grim uses, including as a refuge for orphans and a detention center for juvenile delinquents. From the 1930s, it was also used to house exiled peasant families and indigent elderly.  The interiors of the Churches of the Presentation and Dormition were completely vandalized, although their exteriors remained intact.

Throughout these cataclysms, the Trinity Cathedral remained locked and protected until the 1980s, when the entire ensemble was deeded to the excellent Veliky Ustyug museum.  With limited resources, the dedicated museum staff has carefully preserved what time and fate have left. Thus, the magnificent baroque icon screen at the Trinity Gleden Monastery embodies two miracles — that of its creation and that of its improbable survival in the 20th century. 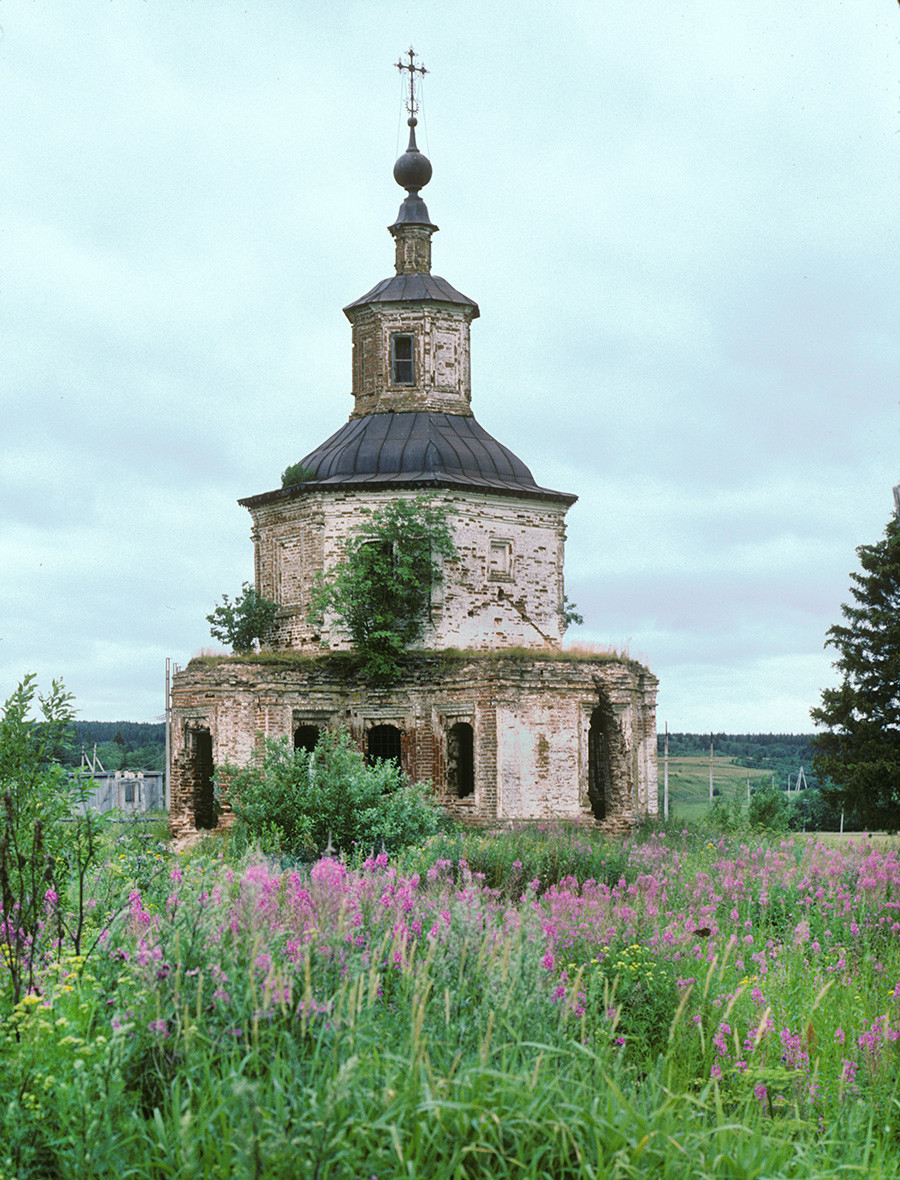