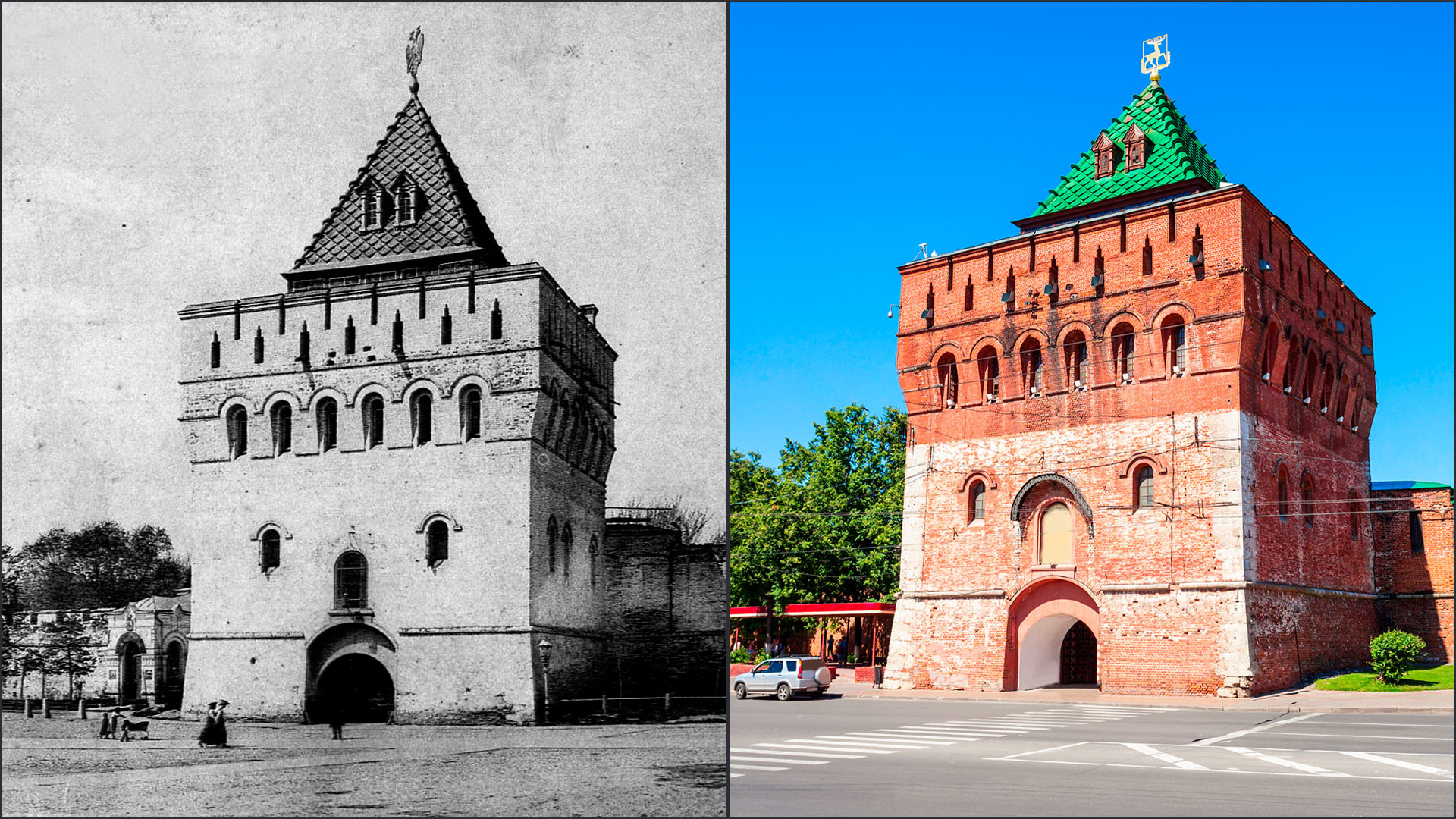 Dmitrievskaya Tower through the centuries.

Russia Beyond (Maxim Dmitriev/Public Domain, Legion Media)
This city has always been famous as an industrial center and the homeland of Soviet cars. That’s why it’s often called the ‘Russian Detroit’. Take a look at how time has changed one of the biggest and tourist-friendly Russian cities.

Founded in 1221, Nizhny Novgorod (260 miles east of Moscow) is still one of the most visited and populated Russian cities (it has more than 1.2 million inhabitants). Its ancient kremlin, cozy paved streets with centuries-old buildings (a regular city plan was adopted after Empress Cathrine the Great visited the city in 1767) and scenic views of the Volga River warm the hearts of locals and tourists. By the way, many people confuse it with Veliky Novgorod (established in 859) in the north-west of Russia. In Russian, the word ‘Novgorod’ literally means “new city” and, luckily, there are only two in the whole country: ‘Lower new city’ and ‘Great new city’. One of the oldest and largest automobile plants that produces GAZ cars is still located in Nizhny (Russians often omit ‘Novgorod’) - and that’s why the city is often known as the ‘Russian Detroit’. In Soviet times, it bore the name of main Soviet writer Maxim Gorky, who was born there.

And despite its steel and metal history, today, Nizhny Novgorod has the poetic epithet of the capital of sunsets. We compared some vintage and recent photos of the city. 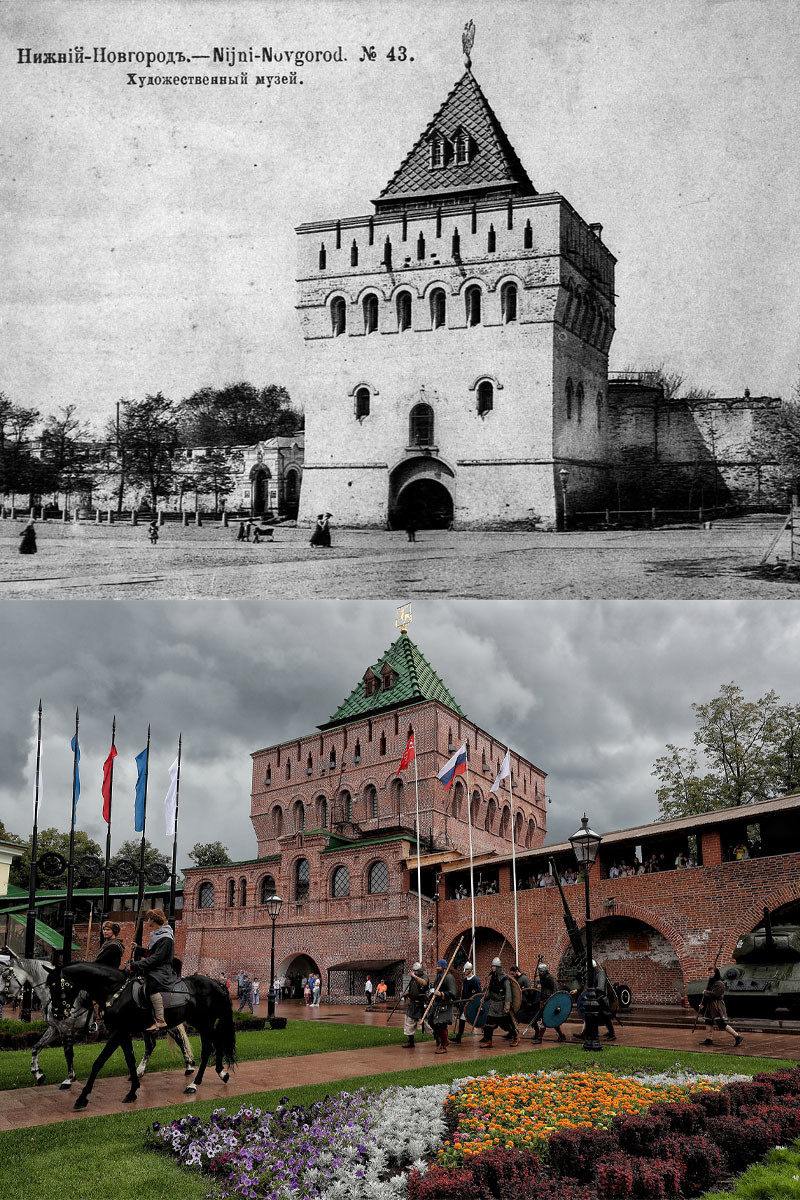 The stone citadel of Nizhny Novgorod was built in the 16th century around the Chasovaya (Sentry) Hill. Here is the most famous view of the fortress with the Dmitrievskaya Tower. Previously, a moat was dug in front of the tower, which was filled with water. At the end of the 18th century, the moat was filled and the tower sunk about 6 meters into the ground. The tower received its a-la Rus facade only at the end of the 19th century. 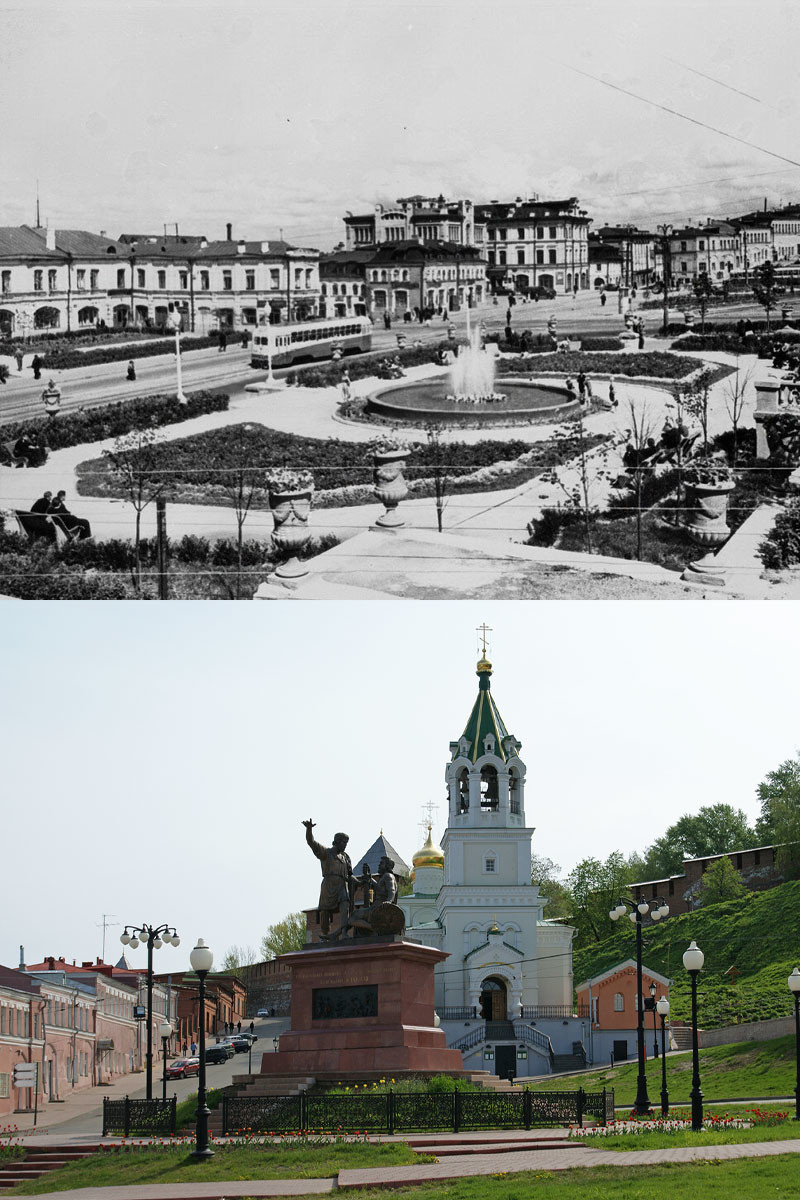 On Moscow’s Red Square, there is a monument to Minin and Pozharsky, who were the leaders of the people’s militia against the Polish intervention of 1611. Interestingly, exactly the same monument stands in Nizhny Novgorod! And all because the militia gathered there. City official Kuzma Minin called on all residents to fight and Prince Dmitry Pozharsky was chosen as the militia head. The date of Moscow’s liberation from the Poles (November 4) has been celebrated as National Unity Day in Russia since 2005. In the same year, Nizhny Novgorod’s Skoba Square, where the militia gathered, was renamed ‘National Unity Square’ and a monument to the two national heroes was erected there, as well. 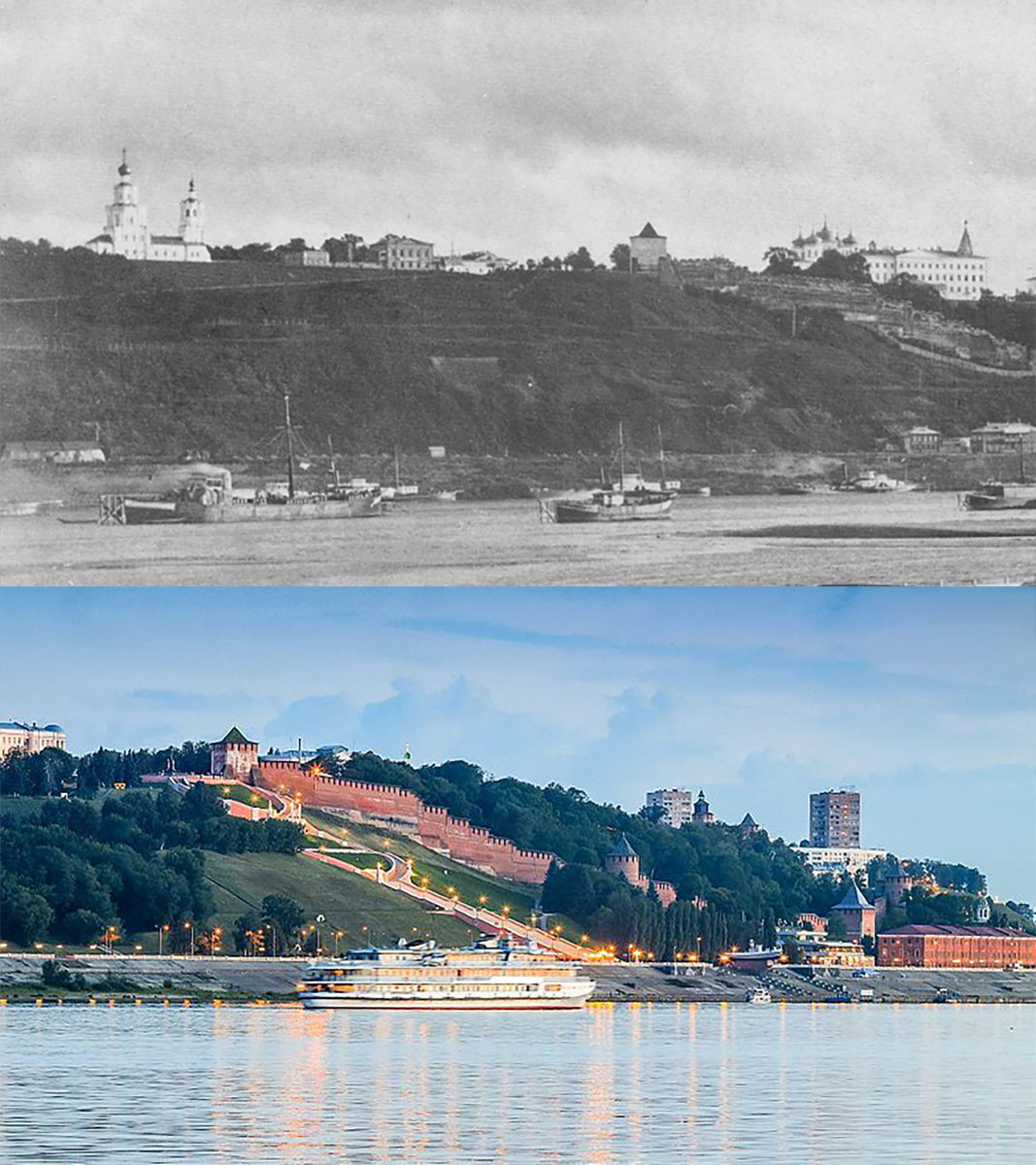 With 560 steps, these are some of the longest stairs in Russia! The site where this staircase was built was called the ‘Volga Downhill’ and was very popular among locals, since it had one of the most picturesque views of the Volga. The stairs, named after a pilot named Valery Chkalov, connect the upper and lower embankments in the historical center of Nizhny Novgorod. Among the architects was Lev Rudnev, who worked in the Stalinist Empire style and designed the Moscow State University and the Palace of Culture and Science in Warsaw. 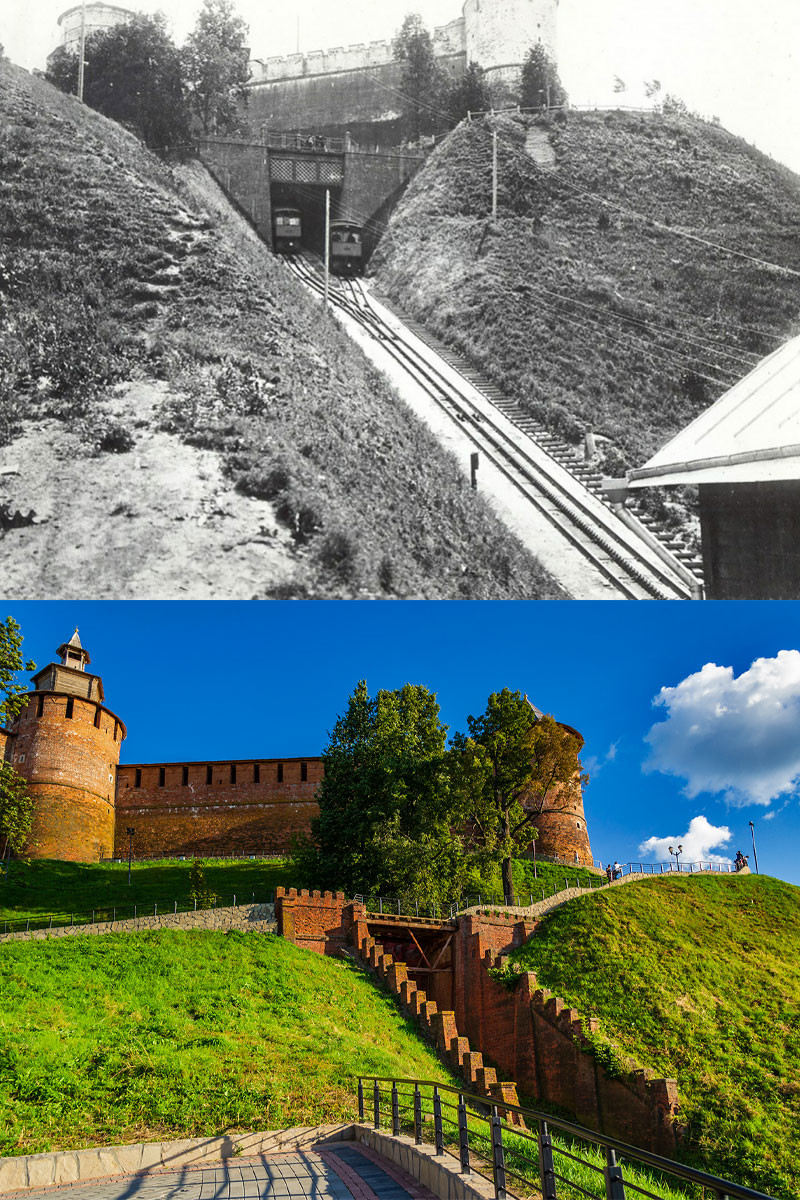 Kremlin funicular in operation... and in ruins.

Amazing: At the end of the 19th century, in the center of Nizhny Novgorod, two funiculars operated near the kremlin. They literally worked on water. Imagine a water tank in the car: filled at the upper station, empty at the lower station. When one car went down, the lower one went up under its gravity. They would move at the same time. The funiculars were abandoned in the 1920s, when a tram line was completed. Today, only ruins remain in place of the historical funiculars, although the city administration has already promised to recreate this type of transport. There still is one funicular operating in Nizhny Novgorod, which connects it with the city of Bor on the other side of the Volga River. 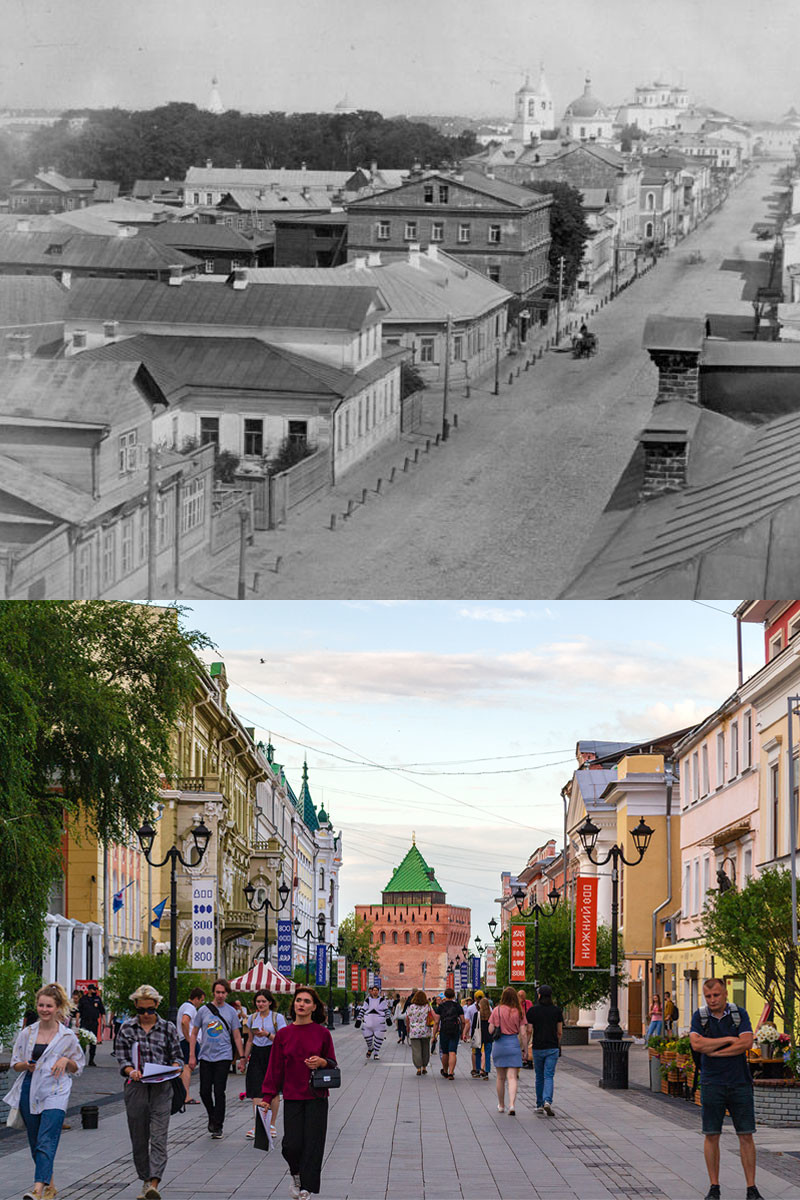 The main street of Nizhny Novgorod has undergone many changes over the centuries. Before the revolution of 1917, it was the favorite area of nobles to settle. Along the street, you can still see old stone mansions, theaters, churches. One of the most beautiful buildings is the main state bank built in Neo-Russian style. It was opened for the 300th anniversary of the Romanov house in 1913. At the beginning of the 20th century, a tram line passed there - one of the first in Russia. But, since the 1980s, the street has become pedestrian only. 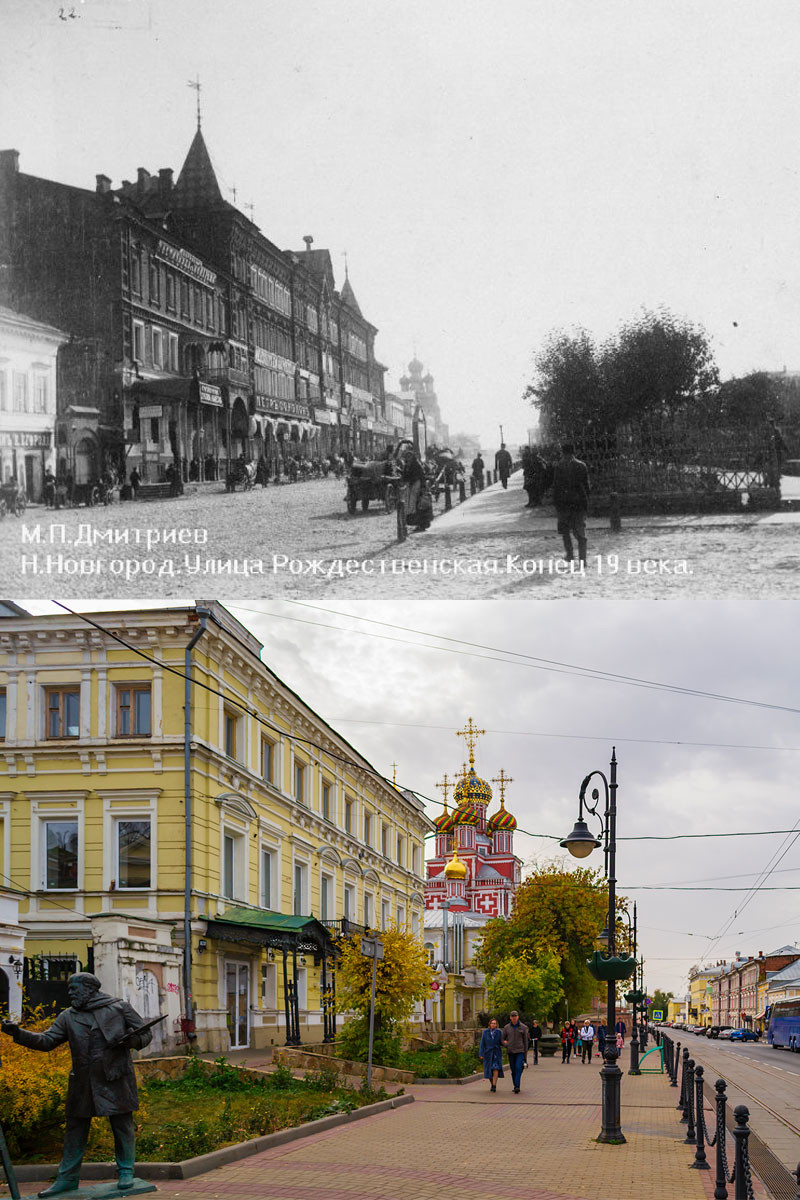 A historical tram line has been preserved on the other oldest street, Rozhdestvenskaya. However, now it’s a tourist transport and it operates only in summer. The street has also preserved its appearance since pre-revolutionary times. There, you can see almost all the same buildings that were in Tsarist Russia, including the Stroganov and Golitsyn estates, the Church of the Nativity of the Blessed Virgin Mary and Blinov Passage - the first shopping center outside of Moscow and St. Petersburg. 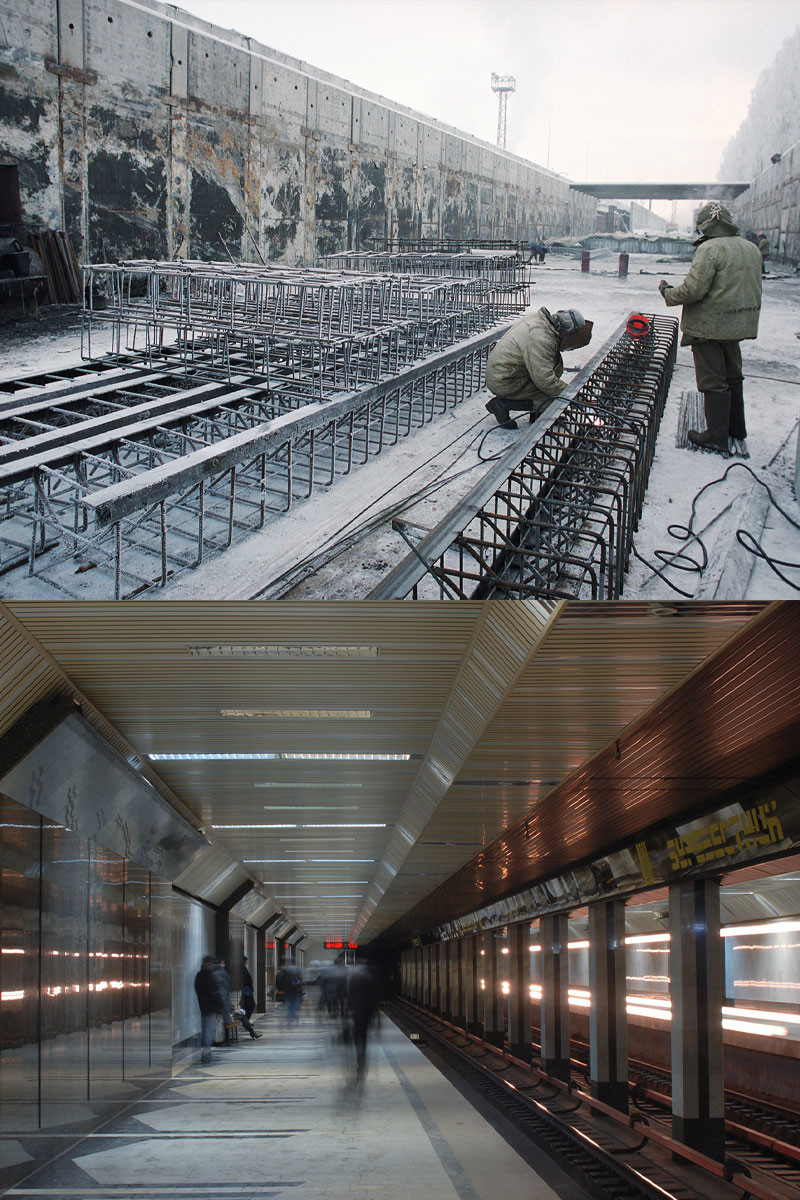 Nizhny Novgorod is one of the seven Russian cities with its own underground transport. The metro here was opened in 1985: In Soviet times, only cities with the population over 1 million residents had a subway. It consists of only two lines and sees about 115,000 commuters a day, which makes it less popular than ground transports. In the near future, there are plans to build new stations on the other side of the Oka River.

Before and after restoration, 2021.

The Referees Tower built in the Neo-constructivist style on the embankment of the Grebnoy Canal was built in 1988 for the 2nd All-Union Youth Rowing Games. Over time, it was severely destroyed and only recently restored, for the 800th anniversary of the city. Of course, with cafes and places to relax. It’s beautiful, isn’t it? 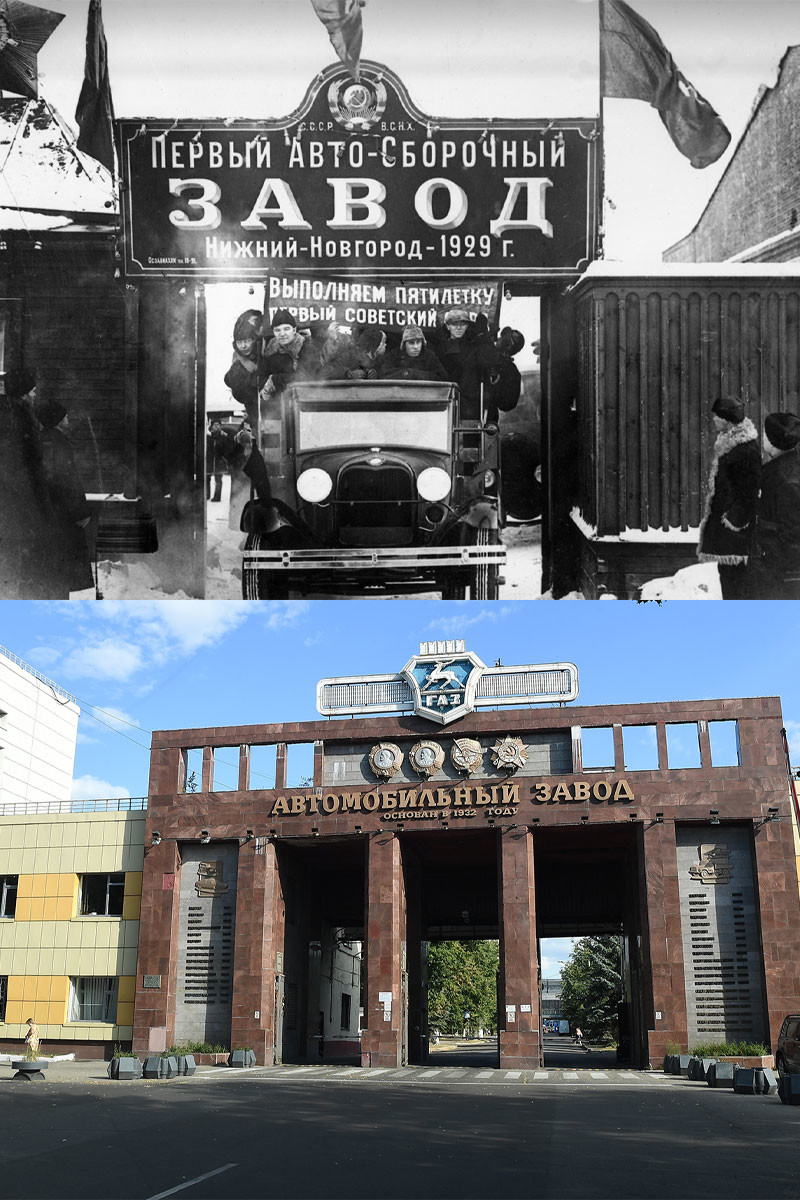 The GAZ (Gorky Automobile Plant) plant in Nizhny Novgorod became one of the first in Russia. Early models of trucks and passenger cars were produced under a Ford license. In the 1920s-1930s, American specialists also helped to build the plant itself and the socialist city for workers In the post-war years, the ‘Volga’ and ‘Chaika’ cars were the most expensive among Soviet cars - a citizen’s dream! These days, the plant still operates, but produces mainly trucks and minibuses. 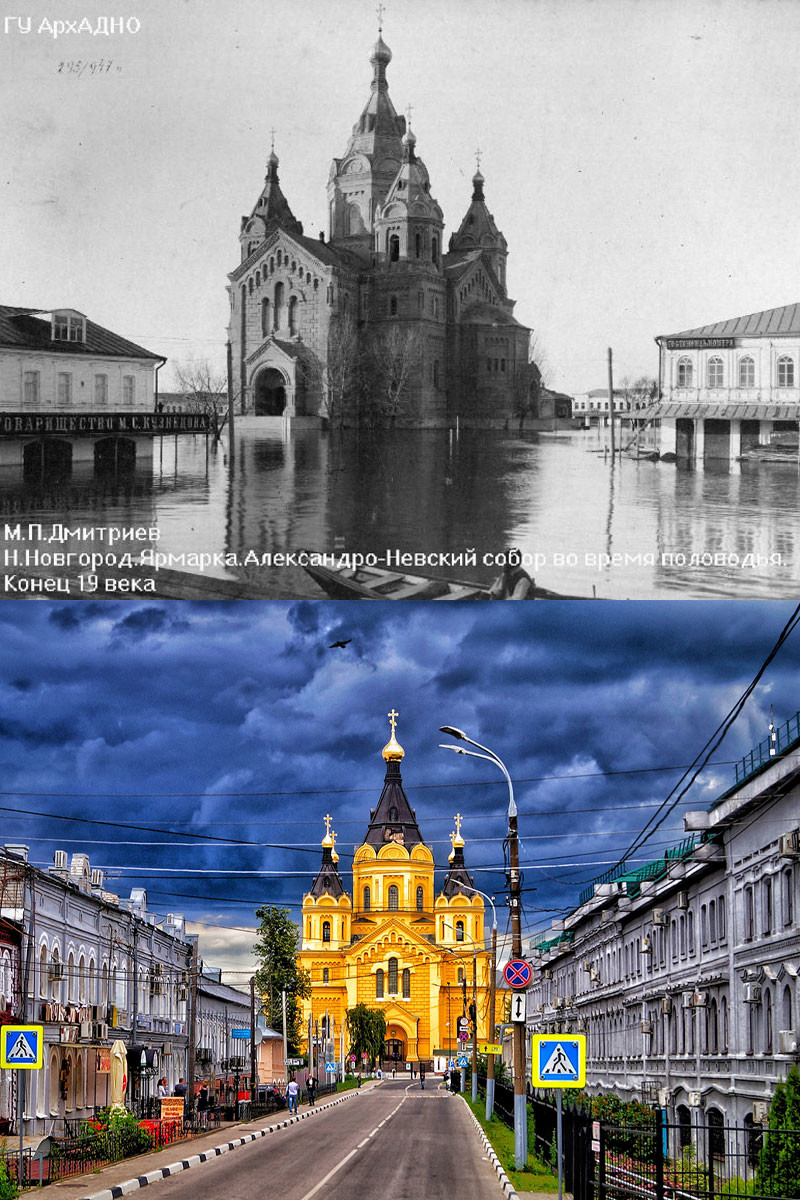 The Cathedral Church of Nizhny Novgorod is located in one of the most picturesque places of the city - on the arrow of the Volga and the Oka rivers. People used to call it ‘fair church’, since its parishioners were merchants who came to fairs from all over the country. It also was only open in the summertime. In the Soviet years, the iconostasis was dismantled for firewood to heat houses and then it was even planned to demolish it altogether and build a lighthouse and a monument to Lenin on the same site. Nevertheless, the cathedral was preserved (in the 1980s, it was restored by volunteers) and, in 2009, was reinstated as the city’s main church.