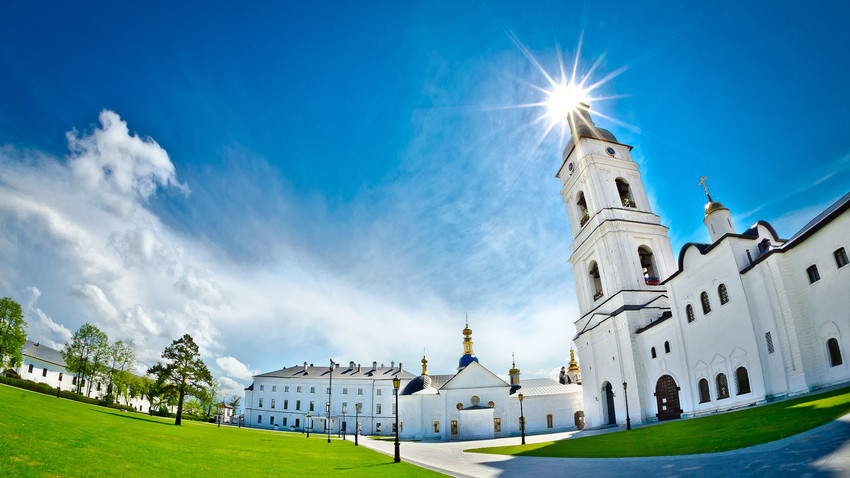 Getty Images
Why visit Tobolsk? Well, for one, to look at the ancient capital of Siberia, feel what the great exile Fyodor Dostoevsky and Romanovs royal family experienced here and also admire how the city has changed since then.

Tobolsk (located 2,300 km from Moscow) is a unique Siberian city. Standing on the outskirts of the main roads, surrounded by endless taiga and several, almost empty, villages and the majestic Irtysh River. Tobolsk used to be the real capital of Siberia and still today you can see its dazzling white kremlin, European-like paved streets and even a Neo-Gothic church. Other Siberian cities overtook the leadership from Tobolsk and for several centuries it became an infamous place of exile. The future great Russian writer Fyodor Dostoevsky and the last Russian Emperor Nicholas II’s family were held there as prisoners, among others. 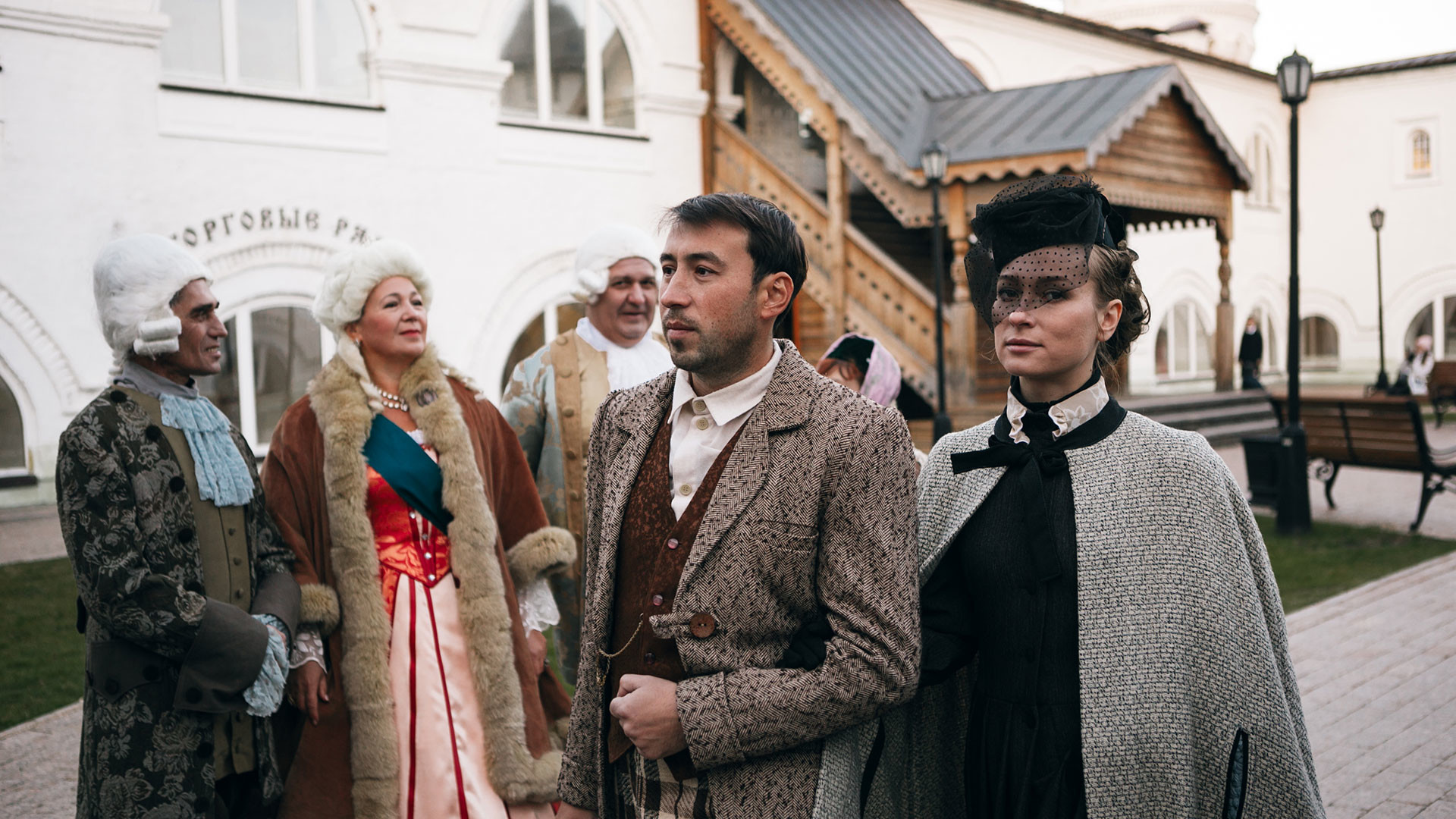 Today, the city is a growing industrial center, thanks to the production of polyethylene and liquefied gases owned by Sibur Holding. This large petrochemical company is investing heavily in the development of the urban environment and the transformation of the old Siberian fortress into a real tourist hub.

Moreover, the recently opened modern airport makes the city even more accessible and attractive for tourists than ever before. 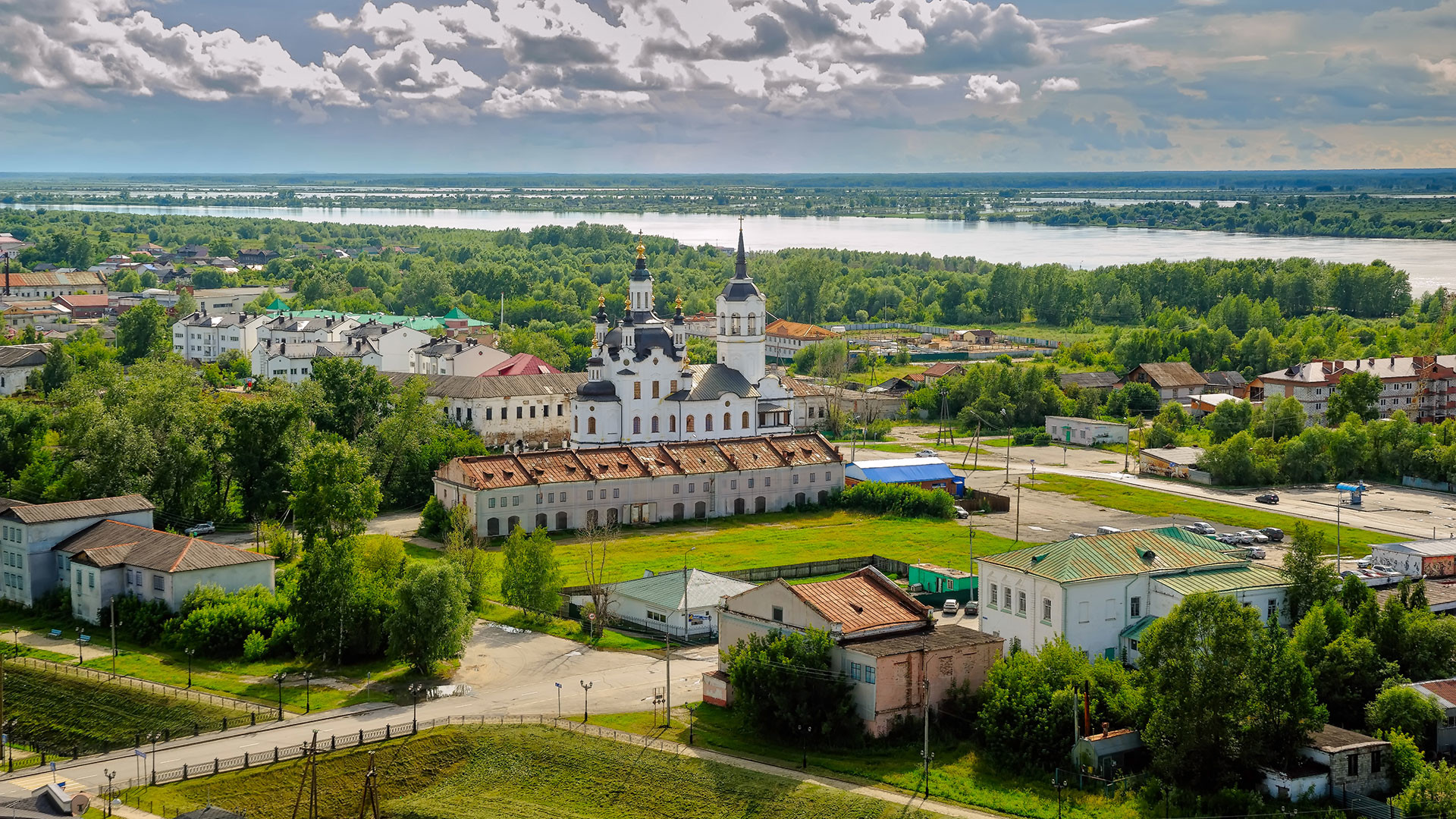 Tobolsk appeared on the Russian map during the conquest of Siberia: In 1582, under the leadership of Yermak Russian troops occupied the Siberian Khanate’s capital of Kashlyk and, in 1587, a few kilometers from it, at the confluence of the Irtysh and Tobol rivers, a new city was founded, with Kashlyk being completely destroyed. Tobolsk received the status of the city first in Siberia. From 1708, it was the capital of the Siberian province, losing its position only at the end of the 19th century, when the regional center was transferred to Tyumen. 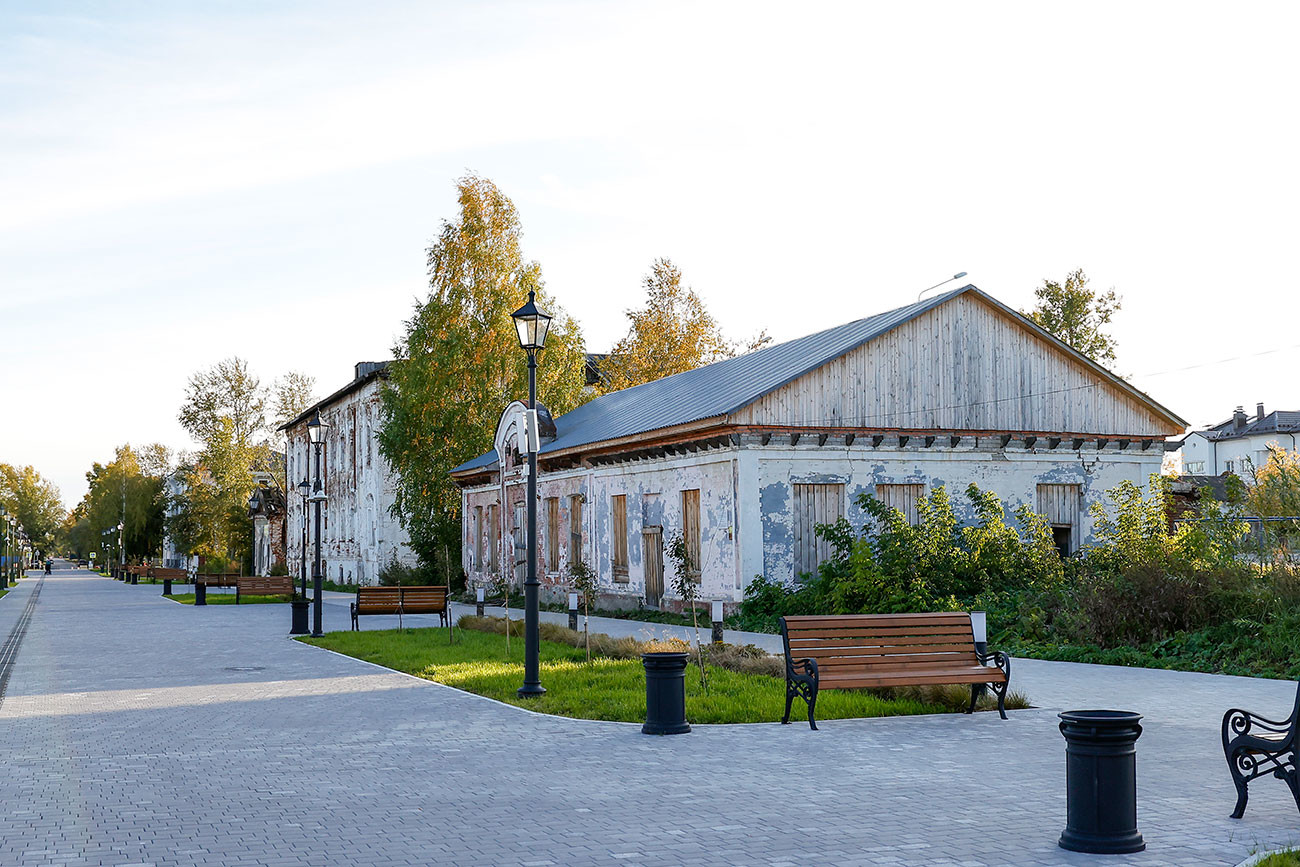 Russian officials and even the Imperial court patronized Tobolsk and actively invested in its development. A large number of ancient buildings have been preserved, which are difficult to find anywhere else in Siberia: For example, the Catholic Church of the Most Holy Trinity in 1907 (the parish was based on Poles and Lithuanians, who were sent here for participating in the anti-state uprisings of 1830). Today,  services and organ concerts are still held. But, even earlier, a stone mosque appeared in Tobolsk - it was built in 1890 in the area where the Tatars from Kashlyk settled at the very foundation of the city.

Today, the city with a population of 100,000 is an industrial center: The petrochemical plant operates here, which also invests in public projects, including the opening of the new Remezov airport.

The only kremlin in Siberia

The main center of attraction of Tobolsk is the white-stone kremlin of the 17th-18th centuries, the only one in Siberia. It stands on a high hill and is surrounded by high walls. One of the oldest buildings in the city is the St. Sophia Cathedral of the mid-17th century, which has very well preserved its historical appearance.

The kremlin was repeatedly rebuilt, but its current appearance mostly comes from the beginning of the 18th century built under the project of the local historian and cartographer Semyon Remezov. According to his project, the winding walls of the kremlin, Gostiny Dvor (a type of shopping bazaar) and the Prikaznaya Chamber (a chamber for the administration) were built.

Surprisingly, Remezov also thought about the future travellers: just look at the view of the city and the Irtysh from the Kremlin’s observation deck! 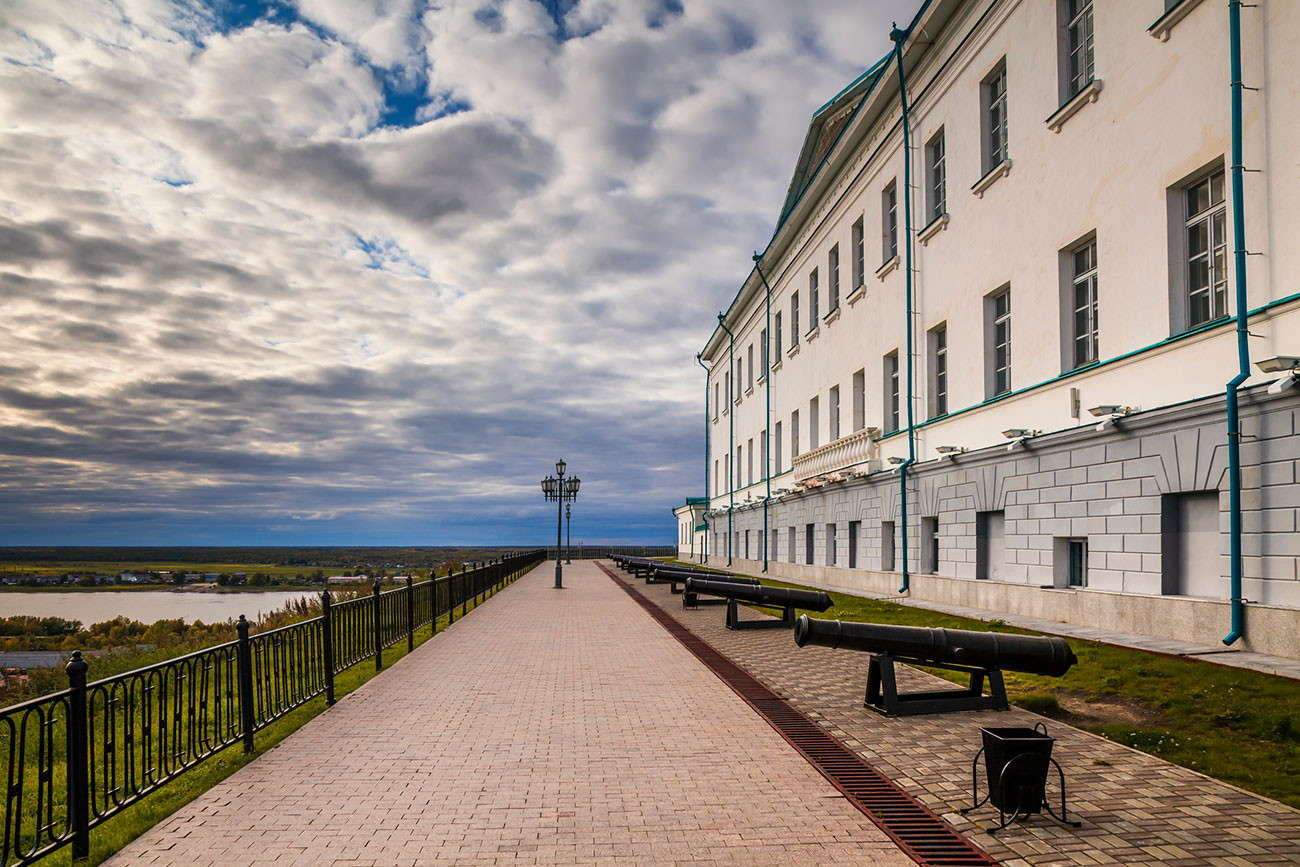 The view on Irtysh River.

Incidentally, the riverbed had to be diverted two kilometers to the south, so that the water would not wash away the hill.

From the Kremlin, you can head down to the city by an incredibly long wooden staircase (it’s called the Pryamsky, or Sofia vzvoz), which connects the lower and upper parts of the historical center. Local couples have a tradition of counting these steps together. If the numbers match, the pair matches, too. But we won’t keep this number a secret: there are 198 steps that stretch for 400 meters. 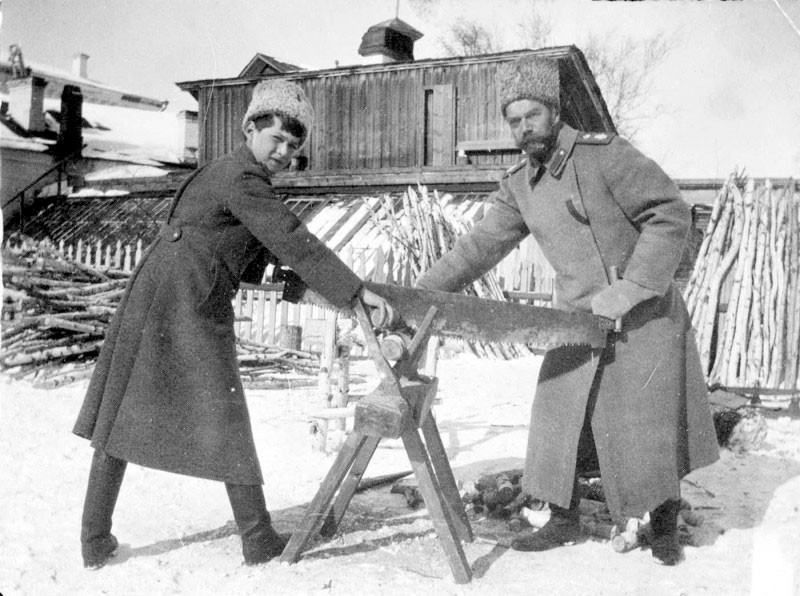 Not so long ago, a trip to Tobolsk, most likely, would not have promised anything good: the city was known as a place of Siberian exile. The first exile, oddly enough, was not even a human, but a BELL from Uglich, which announced the death of Tsarevich Dmitry in 1591. Then, writer Fyodor Dostoevsky (during the transfer to the main place of the penal servitude in Omsk in 1850), the philosopher Nikolai Chernyshevsky (in 1864 he followed to the place of exile in Irkutsk), and the last emperor of Russia Nicholas II together with his family (in 1917 on the way to Yekaterinburg) all had the displeasure of “visiting” the city. 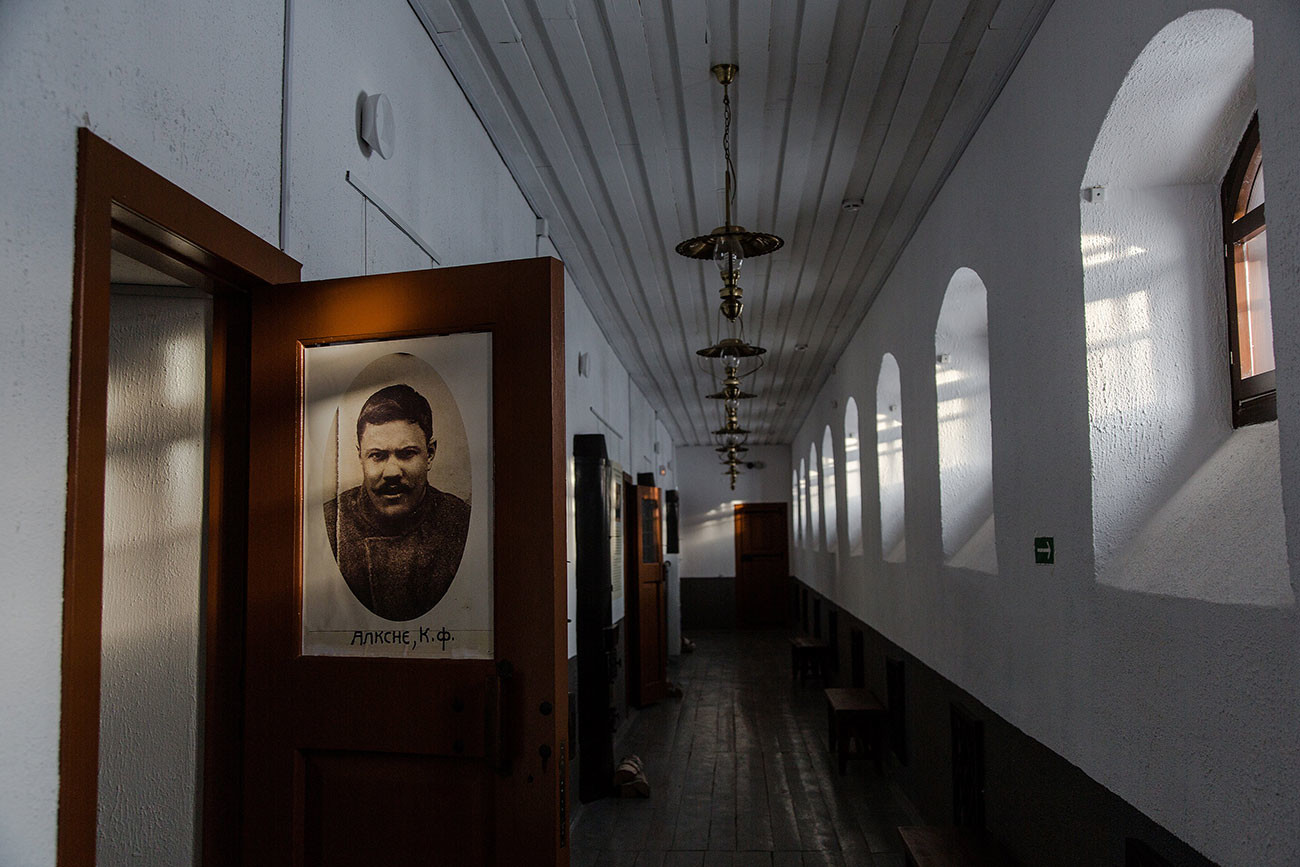 Inside the prison castle.

Most of the exiles (with the exception of the royals) served their sentences in a prison castle specially built for this purpose in the mid-19th century. Prisoners at that time had their heads half-shaved to be easily found in the crowd. However, there was nowhere to run.

In the Soviet years, there was a prison with a particularly strict regime and terrible legends about immured underground torture chambers still exist. The prison was closed only in 1989 and, today, there is a museum. You can wander through the old prison corridors yourself and look into the cells. 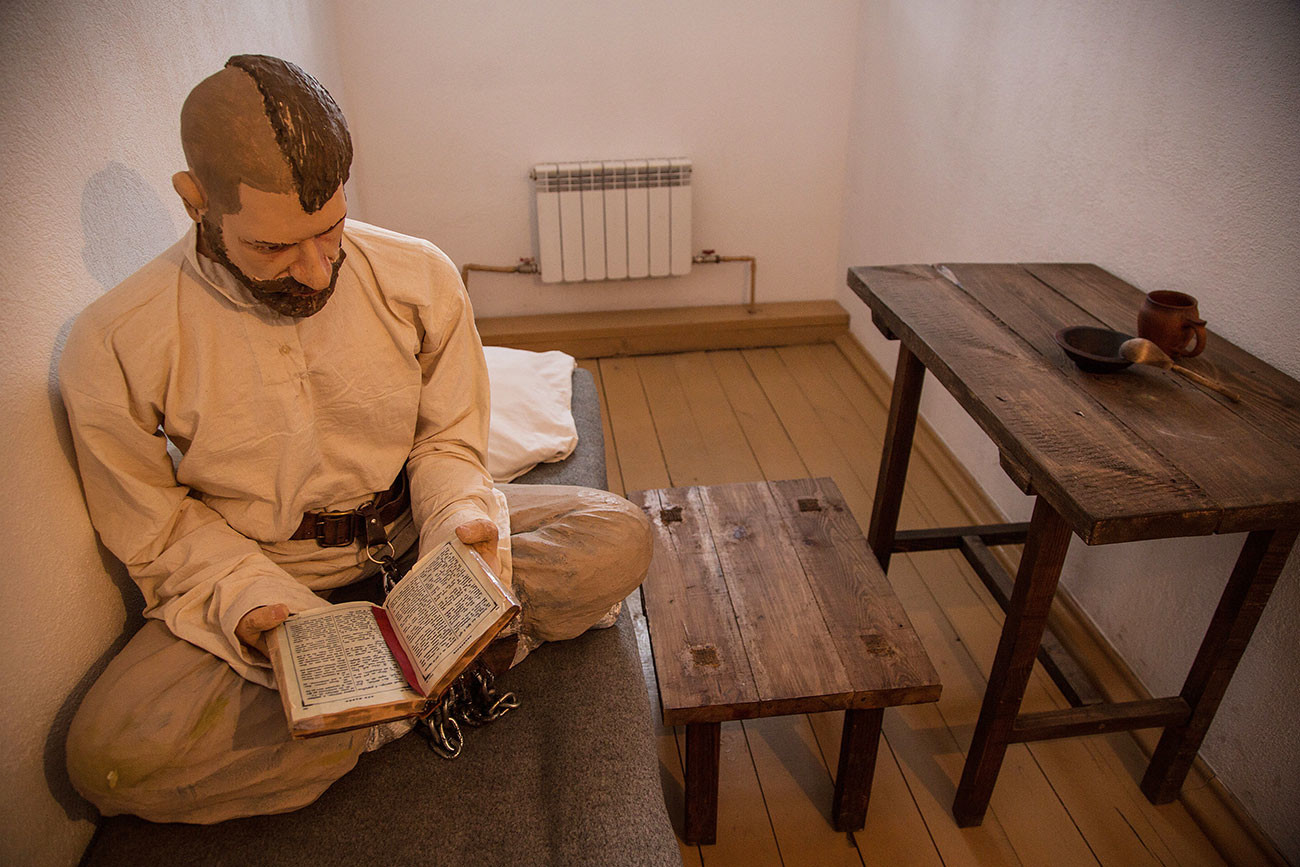 The museum inside the prison castle.

For those who like to immerse themselves in history as much as possible, the museum conducts a quest titled “Escape from the prison castle”, but if this is not enough, then you can even stay there for the night. Visitors of the Uznik (“Prisoner”) hostel in the castle unanimously approve of the convenient location and atmosphere, but note that nights are a bit “creepy”: “Something crackles, clanks, howls.” Who knows, maybe it’s just the wind in the old building.

This castle is located near the kremlin and makes up a very harmonious architectural ensemble with it.

A street with abandoned buildings 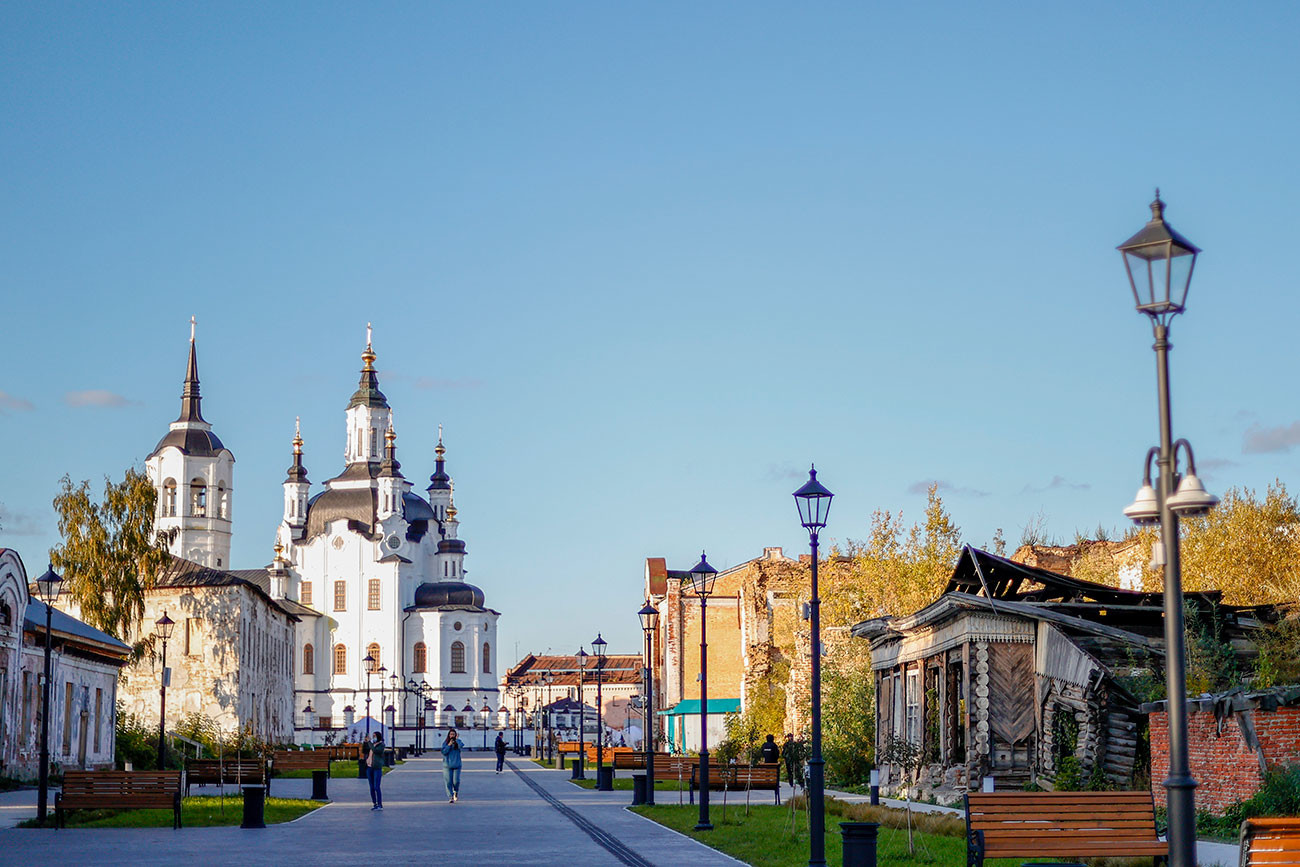 Perhaps this is one of the most unusual pedestrian streets in Russia. Mira (“Peace”) Street with new neat paths, benches and lights stretches along the ruined stone and wooden houses to the very foot of the kremlin and the Bazar (“Market”) Square with cute wooden kiosks with food and souvenirs. Inside the houses, you’ll see greenery in full swing, erasing their merchant past. Some buildings are still planned to be restored over time. 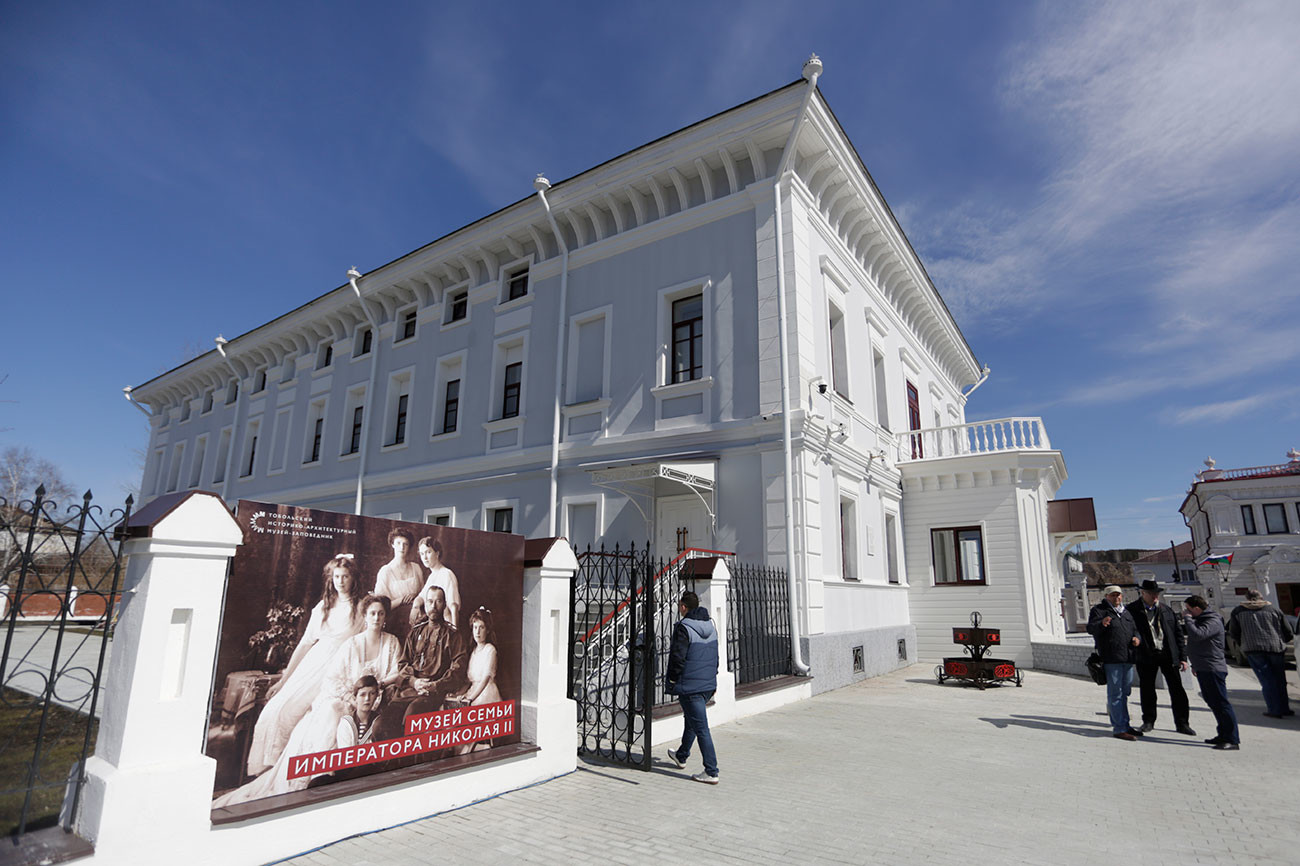 The museum of Nicholas II's family.

One of the surviving houses is the house of the merchant Kuklin, where the Romanov family spent their last Christmas. For about eight months, Nicholas II lived in this house with his wife Alexandra Feodorovna and children after the Revolution. There was electricity, running water, sewerage - an incredible luxury at that time. Nevertheless, in winter there was not enough wood to heat the entire room, the exiles did not have any culinary delights and they were only allowed to leave the house to go to church under guard. 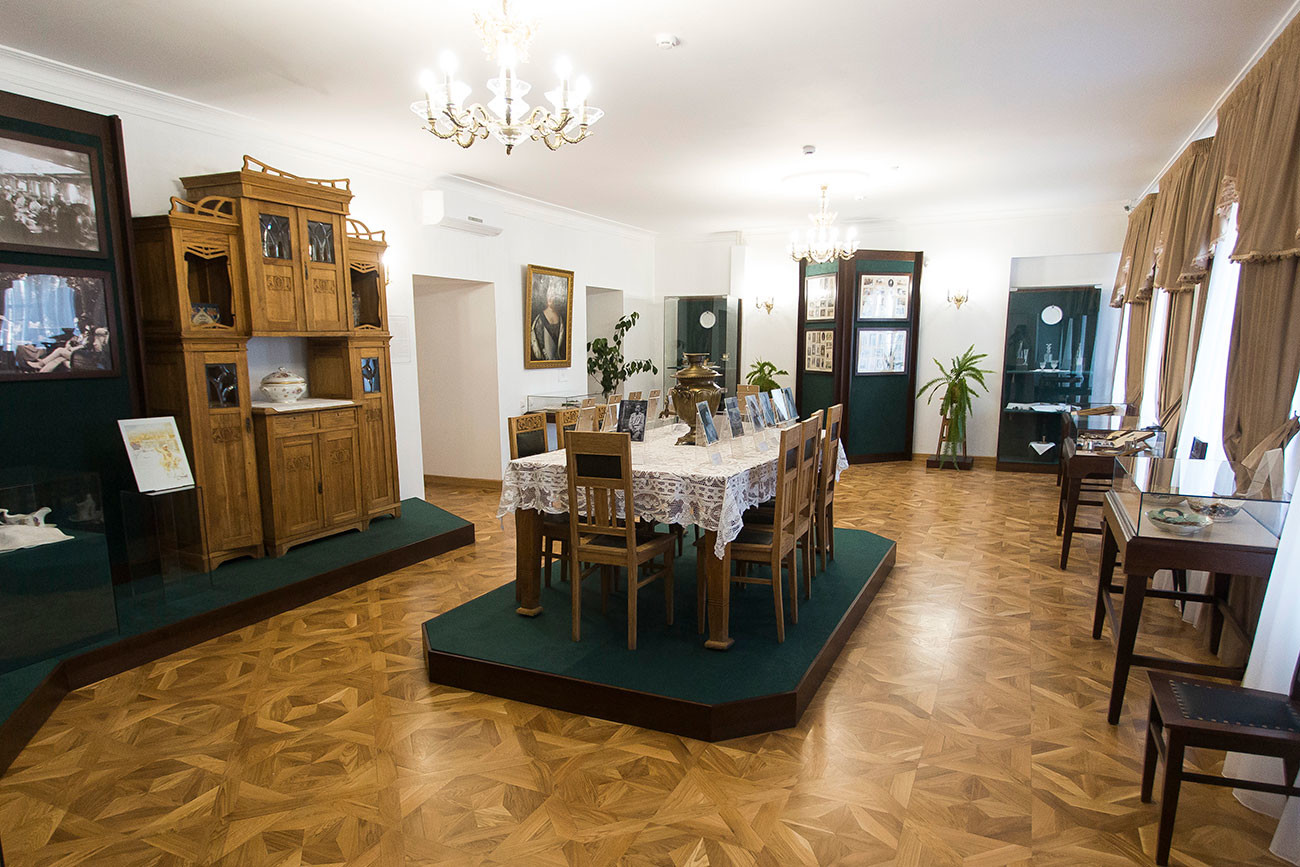 Inside the museum of Nicholas II's family.

The last time they went outside the merchant’s walls was for the Christmas service in the Annunciation Church, which was lost in the middle of the 20th century. And in April 1918, the imperial family was sent to Yekaterinburg, where it met its grizzly fate. Today, there is a museum in the house of Kuklin, where personal belongings and photos of the Romanovs are shown.

How to get there: by plane from Moscow or Yekaterinburg or by train from Tyumen.