I visited Astrakhan, the Russian MELTING POT of religions and ETHNICITIES (PHOTOS) 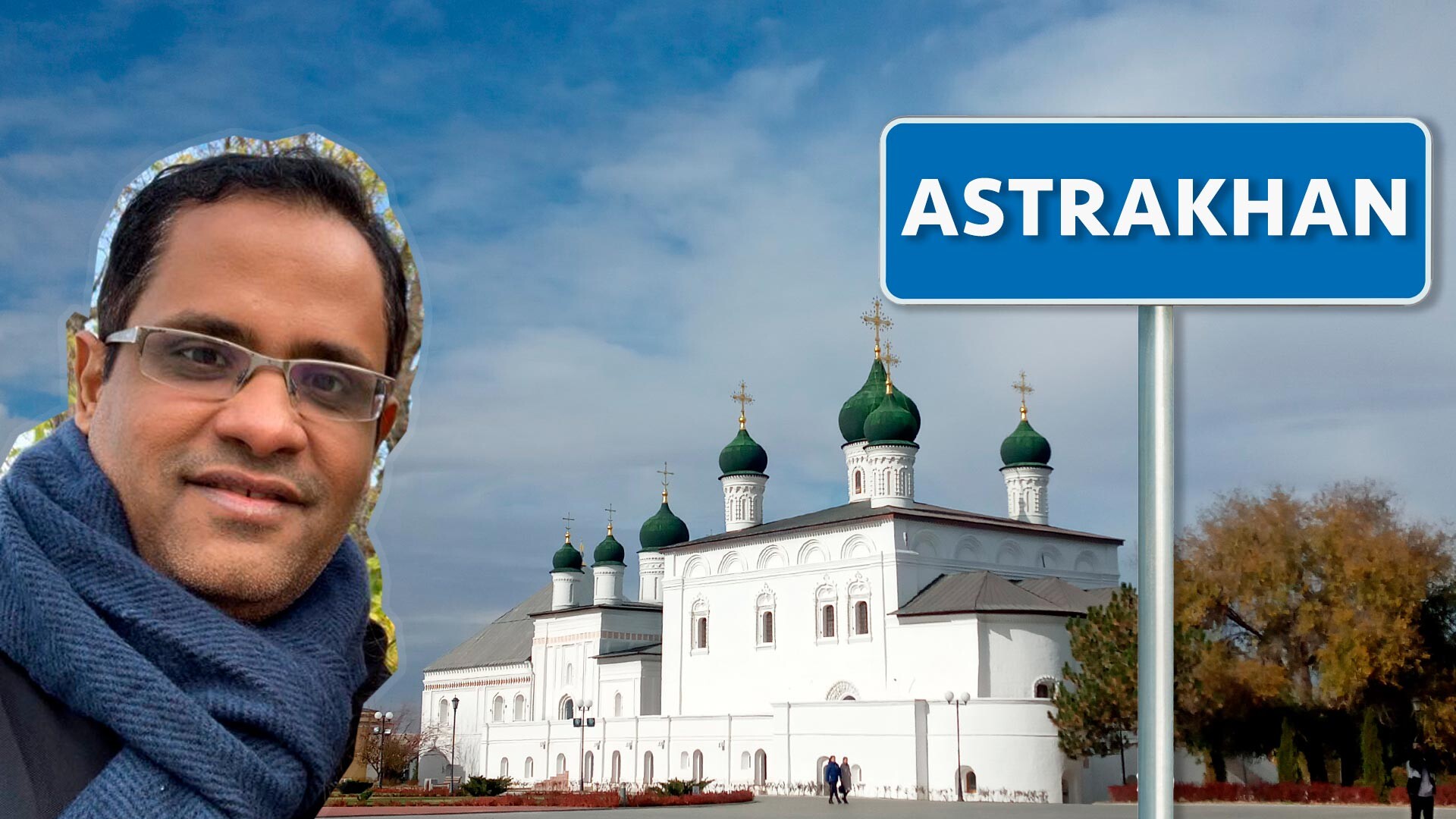 Personal archive
In our latest installment on pandemic travel in Russia, our contributor is enthralled by the diversity and hidden gems he found in the southern Russian city by the Volga River.

When we entered the ATR-72 twin engine turboprop aircraft for our evening flight from Sochi to Astrakhan, my friend Olga and I were a bit surprised to see the ethnic mix of passengers on board. Nordic, Southern European, Caucasian, Central Asian, West Asian and “typical Russian” features were all visible on the two-hour flight to the city by the Volga. As we were to find out over the next three days, Astrakhan, which has a population of 526,000, is home to members of 104 of Russia’s 120 ethnicities. 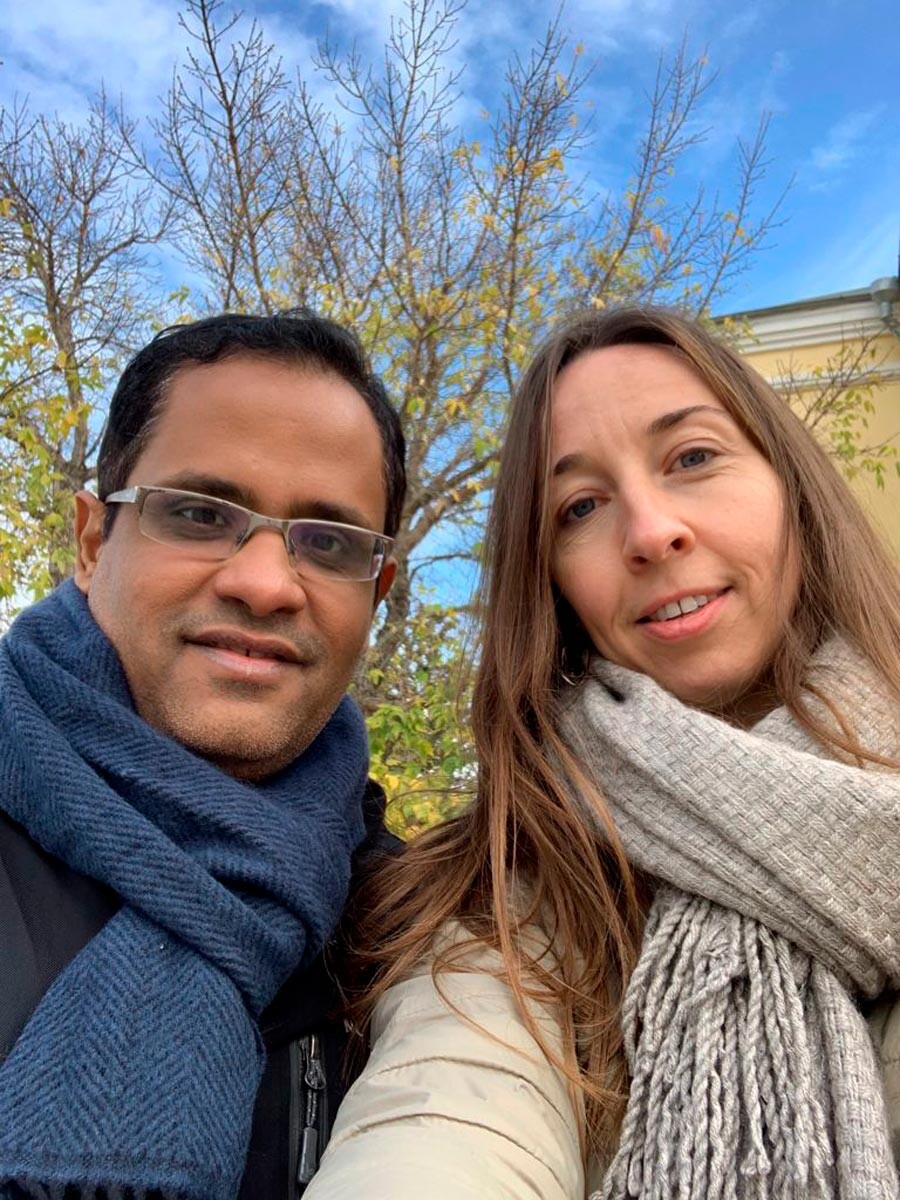 Ajay and his friend Olga on a cold morning

The small airport is just a 15-minute drive away from the city center and we were lucky to find an apartment in a well maintained Stalin-era building literally across the street from the Astrakhan kremlin.

Walk around the city at night

Our first task was to try out the much-hyped Caspian cuisine of the city.  Although it was only 9:30 pm on a Friday, the beautifully landscaped area that is near Lenin Square and borders the Kremlin was almost empty. Tastefully lit, the area had a distinct Mediterranean feel. With a bearable cold breeze and crystal clear air, I found the surroundings to be romantic, but my travel partner said she had an eerie feeling, since we hadn’t seen any others in the street.

As we walked towards the riverside, we found our first Caspian-themed restaurant. Olga managed to calm down over a bottle of white wine and some local delicacies, such as sturgeon from the Volga Delta and ukha, which many restaurants label as the Tsar’s fish soup in their English menus. 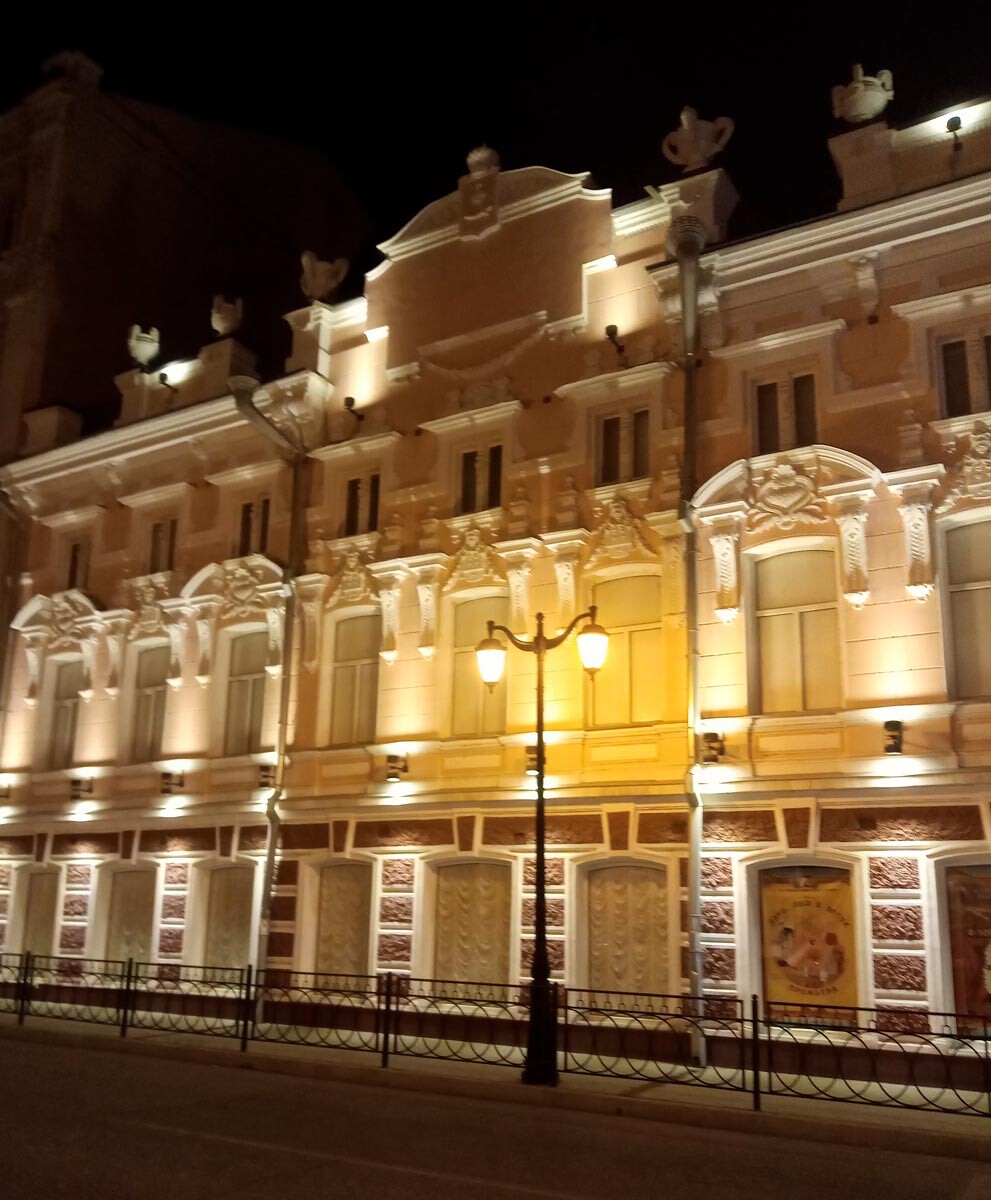 The main activity at night in Astrakhan revolves around the streets leading to the Volga riverfront. This is where the youth of the city go clubbing or bar hopping. There were signs of nightlife in this stretch of the city, but we had seen far bigger crowds in much smaller Russian cities. Locals later told us that they took the pandemic more seriously than their counterparts in other parts of the country and, hence, there were so few people on the streets.

Feel the diversity on display at the Kremlin

On my first morning in the city, I set off on an exploratory run and was absolutely impressed with the city center. The square that was empty the previous night was a hub of exercise and sporting activity. Under clear blue skies and warm sun, I saw well-looked after flower beds and trees that had leaves of every fall color. The season of colors had come and gone from the northern parts of Russia in a hurry in 2021, but Astrakhan was still in mid-fall mode in November. 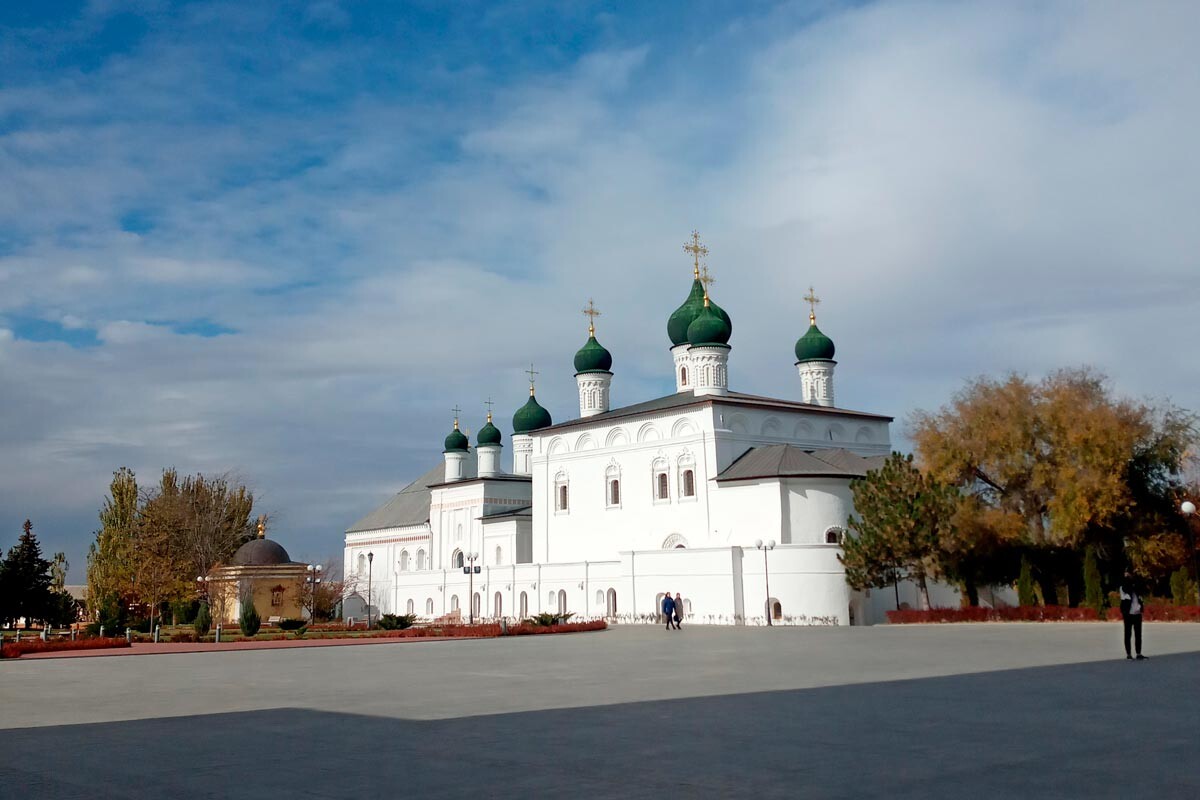 Church in the Astrakhan kremlin

Later that morning, we decided to explore the impressive white Kremlin that towers over the city center. Standing on the Zayachy Hill, this massive fortress was originally built in the late 16th century and has been modified a few times since. Entry to the Kremlin, which opens at 7 am, is free and there are stalls where you can buy local handicrafts. I couldn’t resist buying a handcrafted wooden fridge magnet with an engraved image of this ancient fortress.

The Kremlin is a great place to just roam around or sit on a bench and enjoy the great historical ambience, like many locals do, but we wanted to know more about this fascinating and well-preserved monument. So, we took a guided tour of the complex - in a golf cart! The modern-day Astrakhan Region was contested between various groups and empires until the middle of the 16th century, when it became a part of the southward-expanding Russian Empire. A knowledgeable guide shared many historical facts about the Kremlin and the city with us.

After our tour, we were in for an unexpected audio visual treat. As the sun fought the grey fall clouds and warmed up the temperature to 18°C and the bells tolled from the Assumption Cathedral, a group of teenagers in various ethnic costumes came to the area near the church. Over the next 20 minutes, the colorful group performed a series of dances that reflected the cultures of various ethnic groups who call Astrakhan home. 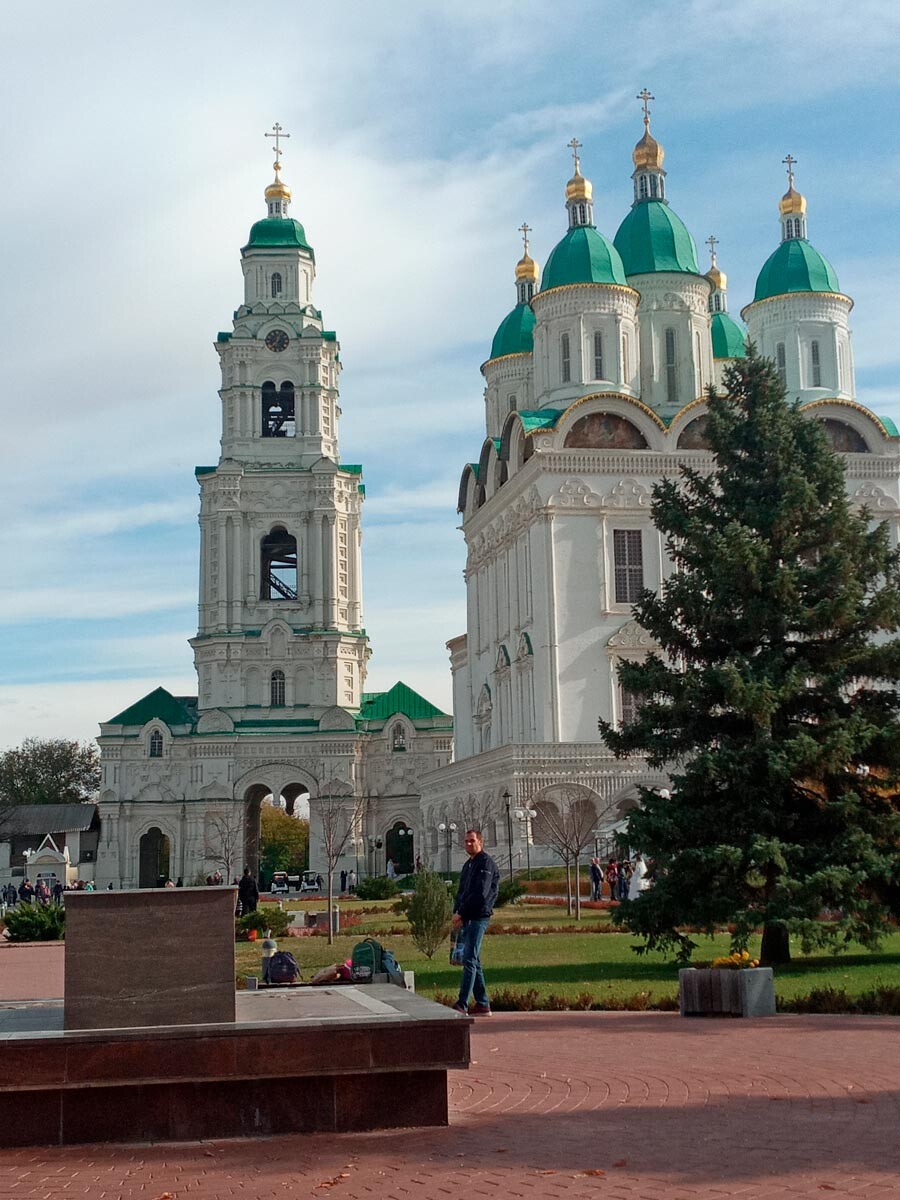 We first saw a Russian folk dance, followed by a Tatar dance and then a performance of the indigenous peoples who inhabit Astrakhan Region. We were lucky to be in the Kremlin on the day the city was marking Russian National Unity Day.

This ethnic diversity can be seen everywhere in Astrakhan, but nowhere it is more visible than in restaurants and bars, where you see groups of people from different backgrounds socialising and making merry. 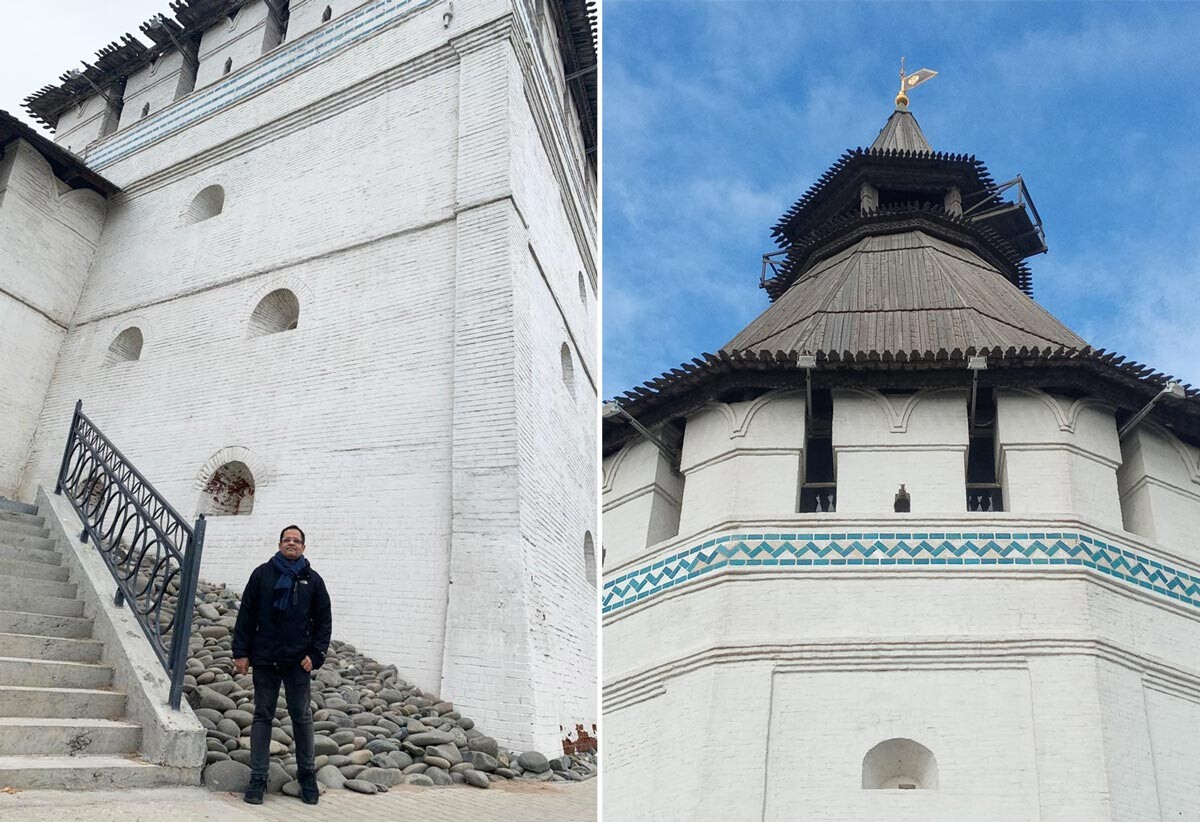 Ajay at the Astrakhan kremlin

Astrakhan is also known for its religious diversity. We went to two recently-renovated mosques that are just outside the historic city center. Non-Muslims are allowed to visit at non-prayer times. There seemed to be a strong Persian influence in the interior of these mosques, which is not surprising, given the fact that Iran is just across the Caspian Sea. The city also has an Iranian consulate and a Russian-Iranian banking joint venture. Some of the stores in the city sell imported Iranian candy.

During our three-day stay in the city, we had a chance to get acquainted with people from Dagestan, Turkmenistan and Kazakhstan. For those from other Caspian states, Astrakhan is seen as a logical entry point to Russia. In fact, several students from former Soviet countries study in the city.

The most interesting feature of Astrakhan is that no two streets in the historic center seem to resemble each other. A street full of early 1900s brownish-red brick structures is cut in half by a thoroughfare that has buildings that are a mix of Art Nouveau, Renaissance and Classicist architecture! Similarly, a walk by the outer walls of the 16th century Kremlin offers views of 19th century buildings that seem to have been transplanted from St. Petersburg. 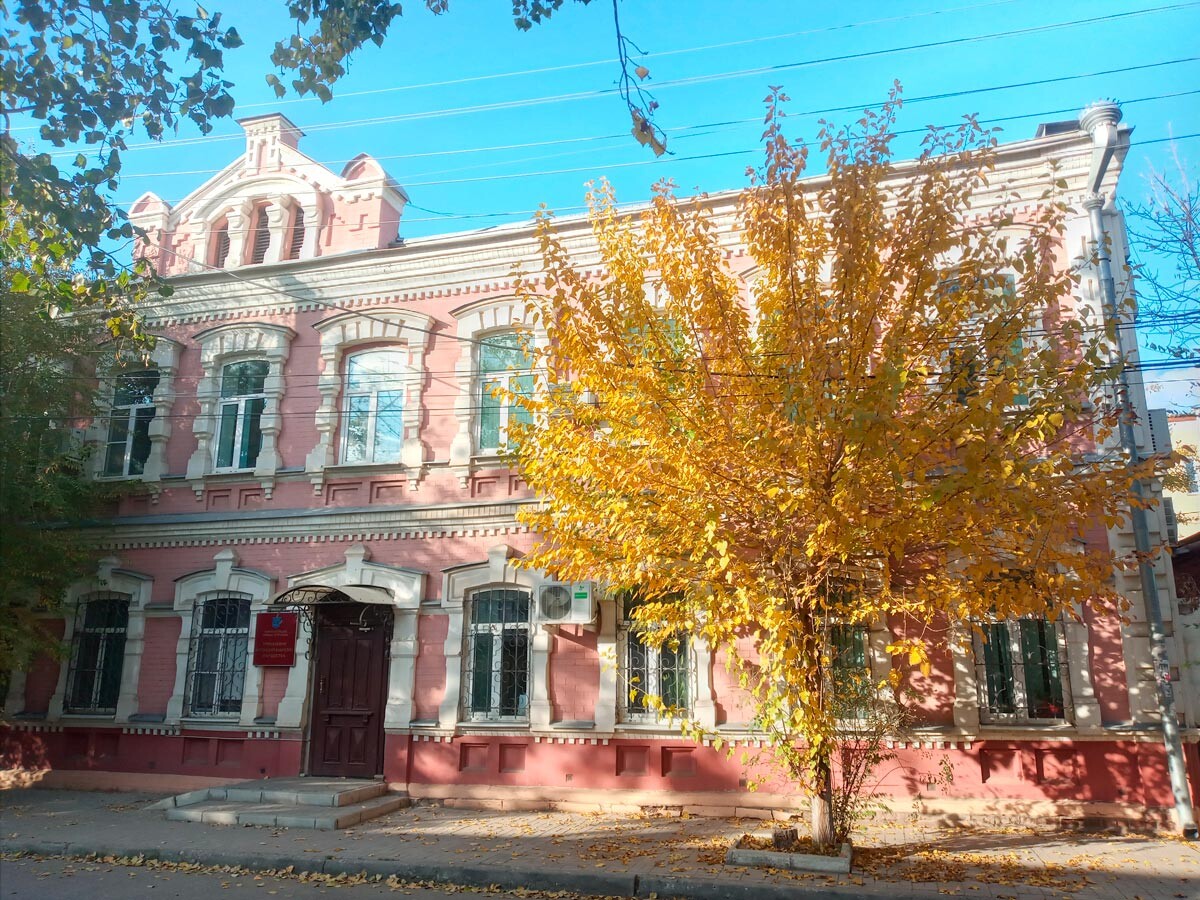 Long-term residents say many of the heritage structures in the city were in a state of disrepair, until a decade ago, when Russian President Vladimir Putin took a personal interest in reviving the city, given its strategic location close to the Caspian Sea.

The victory of the Soviet Union in the Battle of Stalingrad and the resulting halt of German troops advances into southern Russia helped save the older buildings of Astrakhan during World War II. The radius around the Kremlin and riverfront are European in character, but once you cross the canal, a totally different side of the city opens up. These areas have ethnic Persian and Tatar localities, locally known as ‘sloboda’. One gets a feeling of crossing over into an altogether different century when strolling past these areas with their wooden cottages and cosy courtyards.

While there is a strong sense of community here, the area is lower middle class and, unfortunately, did not seem to have any ethnic Tatar or Persian-style cafes. We were told that the best place to sample this kind of food was the Tatar Bazar, which we could not visit. Locals in these ethnic enclaves apparently preferred to either cook at home or eat at food courts in shopping malls. 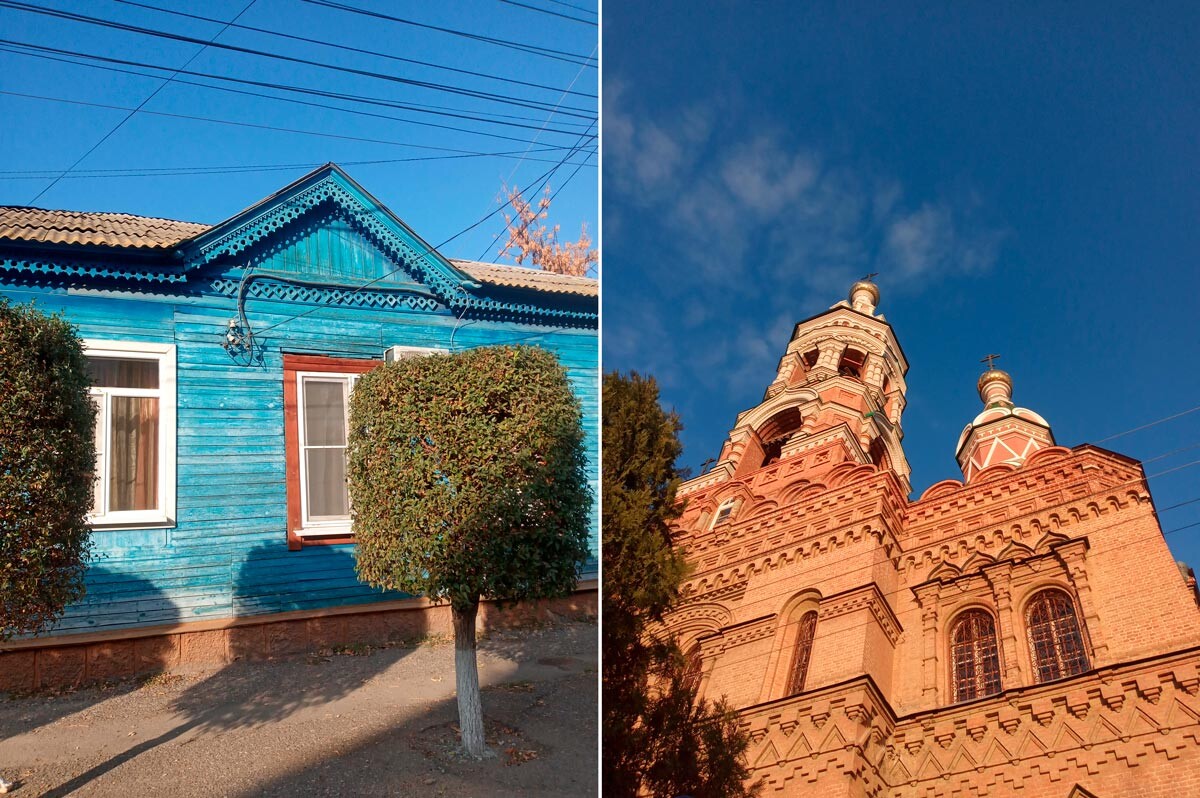 A wooden house outside the center (L); One of Astrakhan's older churches

The classical Russian neighbourhoods in Astrakhan have a wide array of dining options, including an elegant restaurant named ‘Onegin’ (named after Alexander Pushkin’s famous novel in verse ‘Eugene Onegin’), which has 19th century style interiors, chandeliers, paintings of the greats of Russian literature and plays the music of Russian composers Rachmaninoff and Tchaikovsky. Plenty of other restaurants are themed around the Caspian Sea.

Spend an evening by the Volga

It goes without saying that the best place to spend an evening in the city is the riverside promenade. Runners, bicyclists, families, university students and pensioners all converge on this stretch in the early evening, as another day heads off into the night.

The small islands that are visible from the promenade are home to a variety of birds that rush to find shelter in the trees before nightfall. As the river runs south towards the Caspian, nature is absolutely breathtaking. Visitors to Astrakhan in the warmer months often head to the Volga Delta, which is a biodiversity hotspot and home to various species of flora and fauna.

We made it a point to catch the sunset by the Volga twice during our brief visit. Few experiences in Russia compare with seeing the red sun set behind the country’s most iconic river. The ensuing twilight paints the skies of Astrakhan with a unique shade of crimson. 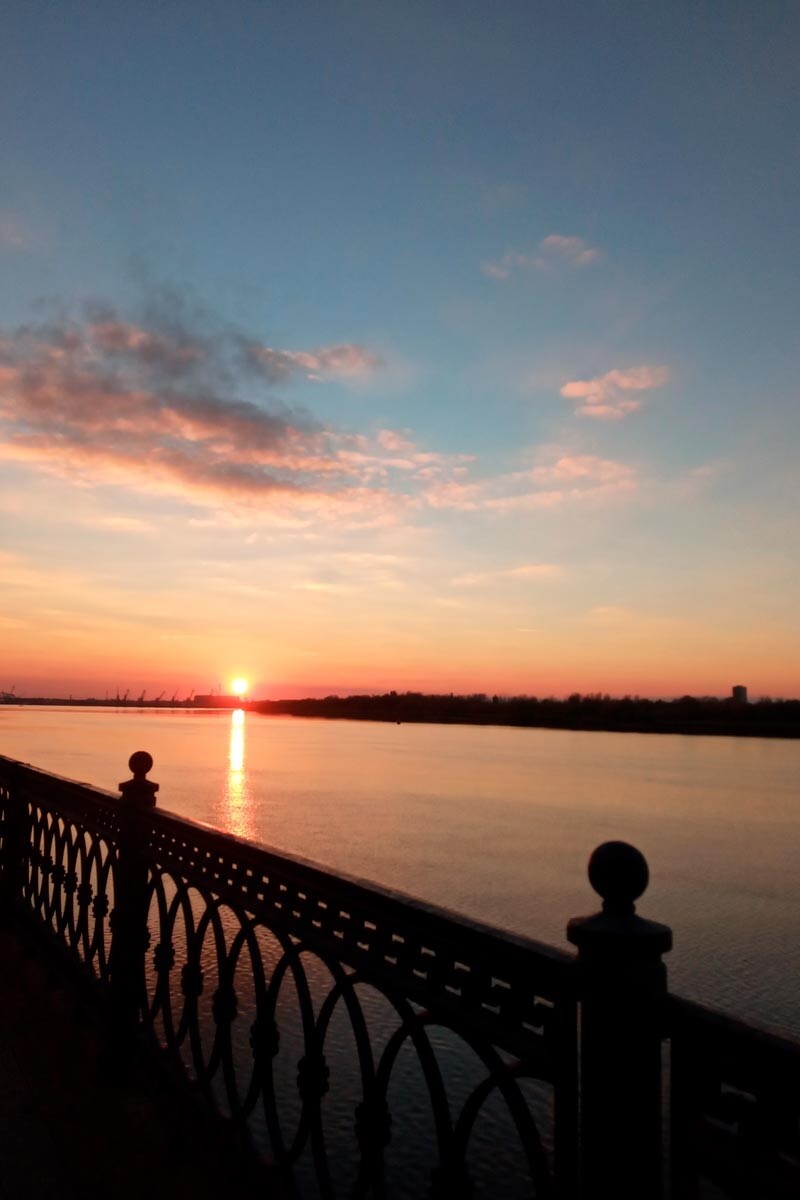 Standing by the riverfront on my last evening in the city, my gaze went to the left, where some 100 kilometers south the great Volga empties into the Caspian Sea. This area has always been a major transit point connecting north and south, east and west. For several hundred years, it was the intersection of the east-west trade route north of the Caspian Sea and the north-south trade route down the Volga to Persia. I couldn’t help but think how the city had the potential to become a major business, logistics and tourism hub, if Russia, India, Iran and the Caspian littoral countries put a fresh impetus on developing the International North-South Corridor.

Astrakhan, as it is, is still a special place where several cultures meet and blend. As a melting pot of religions and ethnicities, no city in Russia (outside of Moscow) represents the sheer diversity of this colossally large country as well as Astrakhan. The city’s communal harmony and amity set an example for many other parts of the world that are struggling to deal with the close interaction of various ethnic groups.