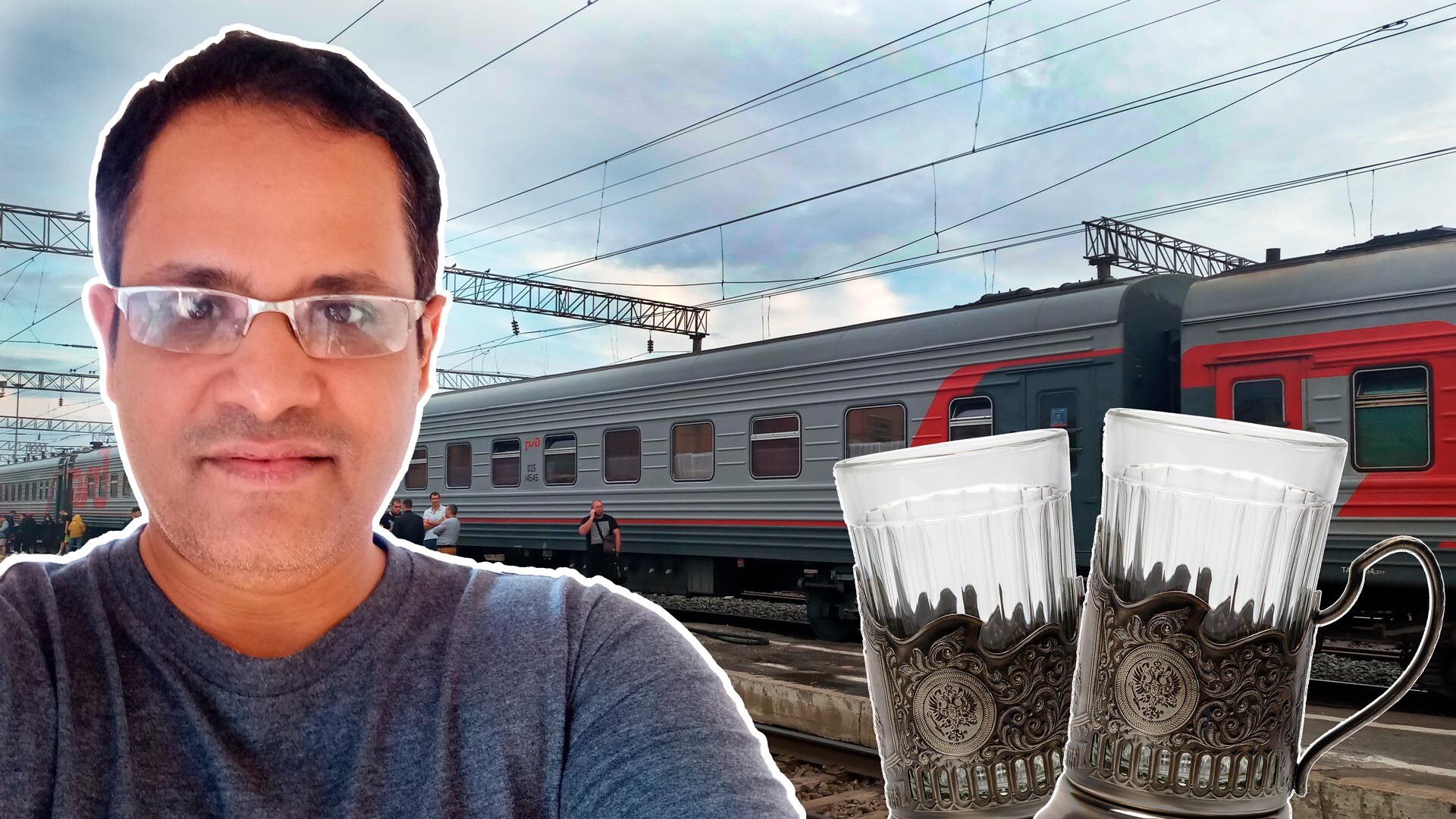 Russia Beyond (Personal archive, Legion Media)
In the final installment in this pandemic travel series, our columnist rediscovers his passion for Russian railway journeys and making new friends.

In the summer of 2003, my friend Olga and I roughed it out across Russia on an epic trip that began with a ferry ride from Sakhalin Island to the Russian mainland and involved 45 days of train travel across Siberia and into the heart of central Russia. We went as far south as Voronezh and as far north as the Valaam Monastery in Karelia. Back then, the train journeys we undertook had varying degrees of comfort, with the ‘platzkart’ (undivided dormitory wagon) ride from Irkutsk to Novosibirsk being the roughest. Almost two decades and a pandemic later, our sense of adventure had not left us, but we were not ready to hop on board the Trans-Siberian yet. We, instead, chose to take two train rides in southern Russia - a six-hour journey from Astrakhan to Volgograd and a 22-hour ride from Volgograd to Sochi.

As a regular traveler on the Moscow-St. Petersburg high-speed Sapsan train, I was well aware of the massive modernization project that Russian Railways had undertaken over the last decade. But I didn’t have high expectations for my latest journeys, as the sheer size and vastness of the country has meant that some routes and sectors have been left lagging.

Vast and empty stretches of land 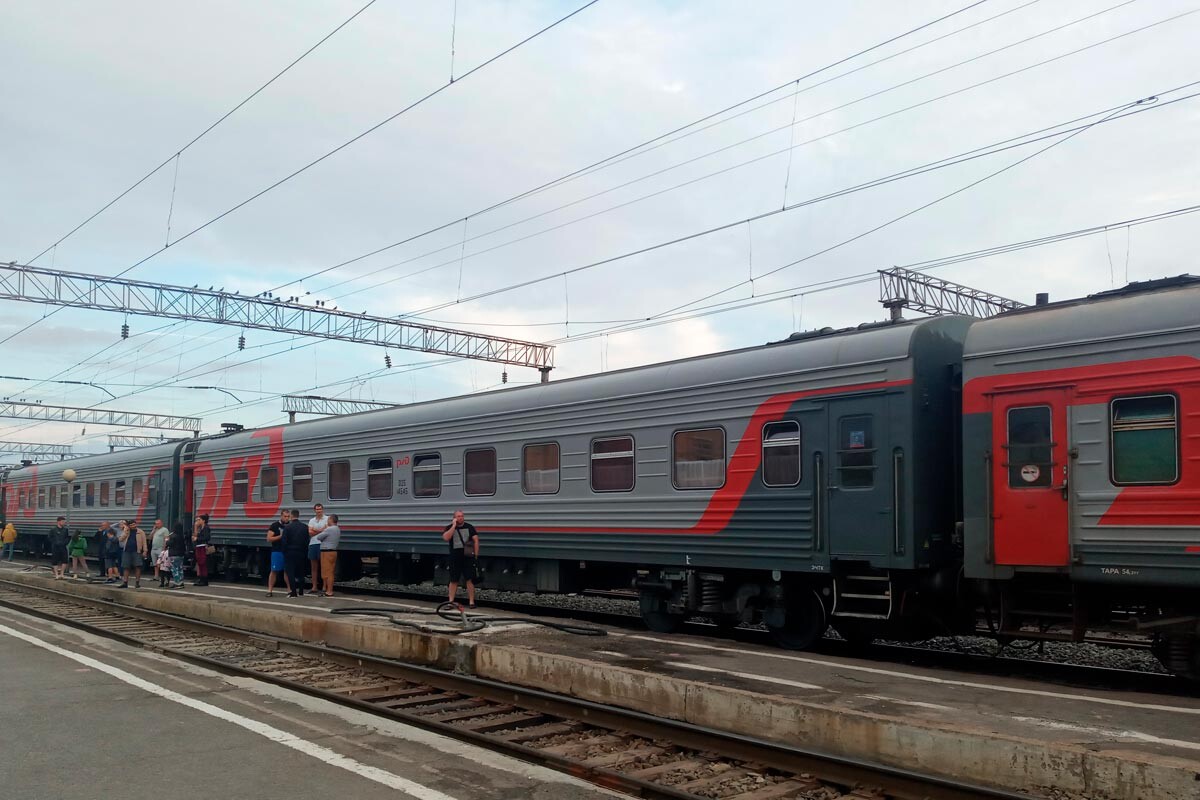 It’s hard not to be impressed with how punctual the trains are in Russia. Our train from Astrakhan left exactly as the clock struck 16:40. As is the case with all trains in Russia, there was a map pasted on the wall showing the arrival and departure times at each stop.

Since the ride to Volgograd was really short by Russian standards (six hours and nine minutes), besides an odd nod to fellow passengers, we did not have much of an interaction with them. I was excited about seeing the river crossings, especially the truss bridge over the Akhtuba River, which had been recently widened to make it a double track. The Privolzhskaya Railway (Volga Railway) connects European Russia to Olya, a port on the Caspian Sea. A small part of it even runs through Kazakhstan. It is being upgraded for the North-South International Transport Corridor.

Once our train left Astrakhan, we saw almost no signs of human activity, except in places close to stations. While I saw the sunset over the vast emptiness of Astrakhan Region, I played Alexander Borodin’s symphonic poem ‘In the Steppes of Central Asia’ on my phone and imagined how, at one time, caravans would travel on the route taking prized goods from Persia and other parts of Asia to towns on the Volga.

At the peak of twilight, Olga and I toasted to the vastness of Russia by drinking coffee in a glass that was in a podstakannik, a traditional tea glass holder that is the trademark of a railway journey in Russia. Railway employees sell tea, coffee, ice cream and snacks at slightly higher than usual prices. To dodge this, many travelers bring their own snacks, tea bags and instant coffee, as all trains have a boiler that dispenses boiling water. A universal favorite on Russian train journeys seems to be instant noodles.

A new friendship in our train compartment 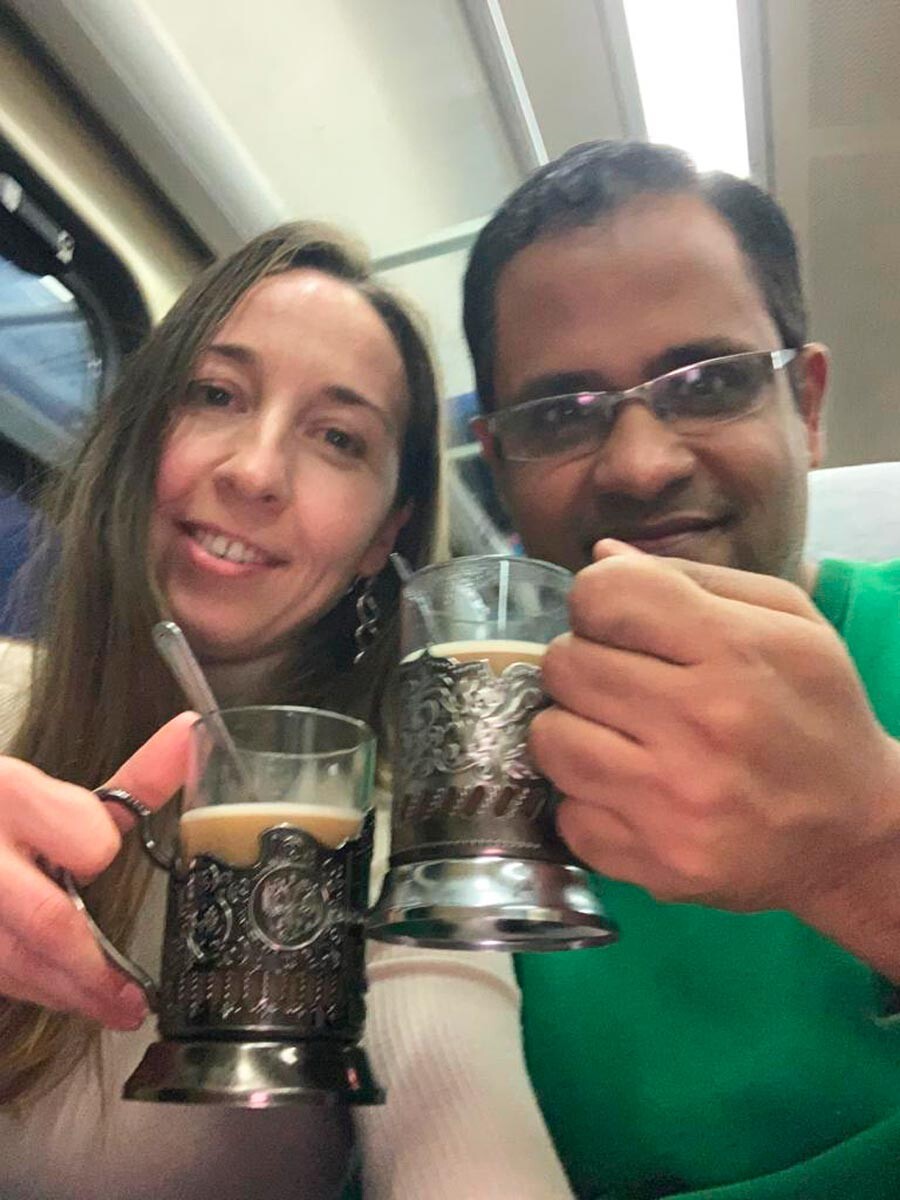 The Russian stereotype about not talking to strangers gets thrown out of the window on longer train journeys. It is very difficult to spend days in one ‘coupe’ (train compartment for four) with people and not interact with them. We took the Krasnoyarsk-Adler Express from Volgograd to Sochi, a train that connected a city in the heart of Siberia to a Black Sea resort town.

When we bought our tickets, my friend Olga was worried about sharing a coupe with a couple of men who would drink vodka and eat fried chicken all day. Much to Olga’s relief, our coupe had a sophisticated, yet friendly, young woman who was moving with her seven-year old daughter from a village in Orenburg Region, near the Kazakhstan border to Goryachiy Klyuch (literally “hot spring” in Russian), a resort town known for its balneotherapy spa.

The mother and daughter shared horror stories about their small village being hit very badly by the pandemic. They were among the first people in the village to get vaccinated, but still did not feel comfortable staying there. I documented our nearly-day long interactions on my personal blog.

Olga’s apprehensions about men drinking vodka were not totally unfounded. There was a day-long party in another coupe in our wagon and a friendly man in his 50s who said he was on holiday wanted me to join in the revelry, but I passed. I was more than content with hearing stories of life in a Siberian village and to see the hope and optimism in the eyes of the people who were sharing a coupe with me.

How we went through a creepy platzkart in the salon car 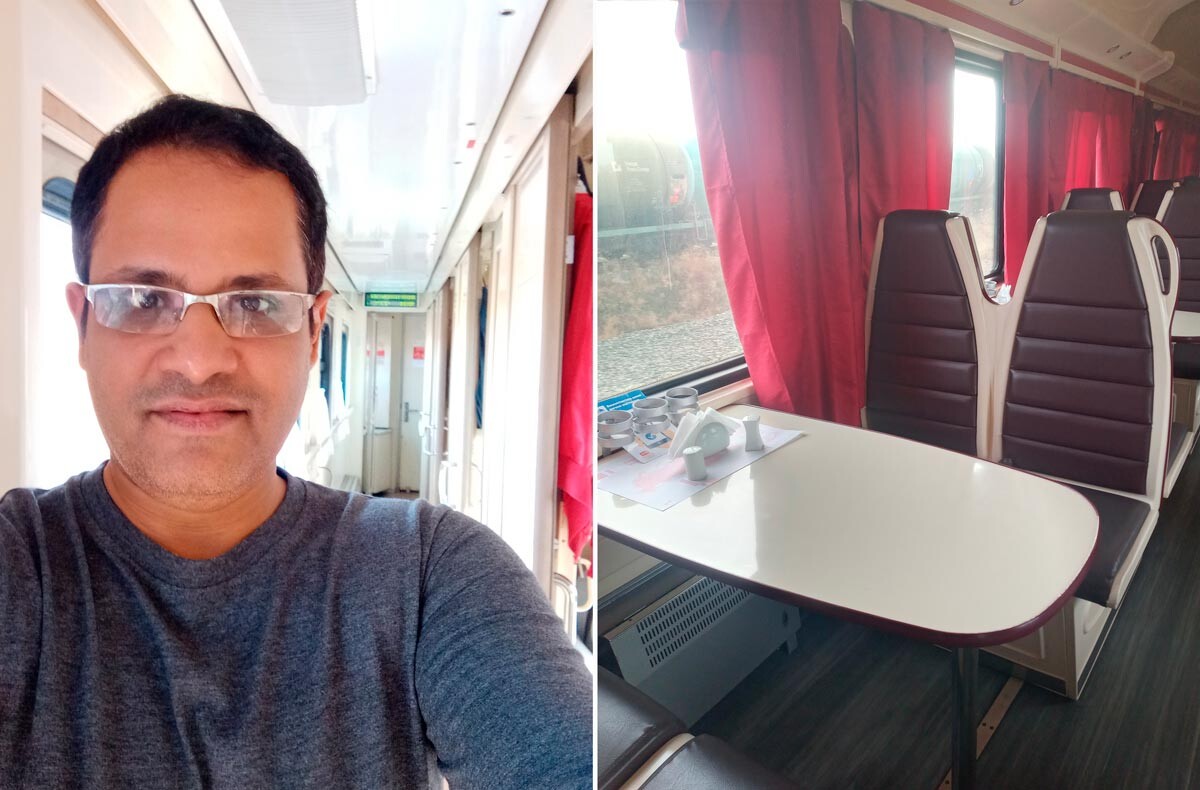 The train could not exactly be classified as super comfortable, especially when compared with some of the more modern trains on popular routes in central Russia, but it was clean and reasonably spacious. The toilets were also spotless and cleaned regularly. This is obviously an important factor when considering a journey of several days.

We wanted to try out the food in the salon car, but, for this, we had to cross a platzkart wagon, which was an experience in itself. The ‘dormitory on wheels’ had a mélange of smells from alcohol to dried fish to fried chicken among some recognizable and non-recognizable odors. When we crossed the platzkart wagon, we realized how lucky we were to get two of the last few remaining tickets in a coupe!

The salon car was empty and had an old-world elegance. Few experiences compare with eating a nice meal and looking at the changing landscapes and scenery of a country. Our train had a special lunch-set menu that included borsch, a salad, pasta and a non-alcoholic beverage. Despite the unimpressive pasta, we quite enjoyed the food.

Even though we were not on board a luxury train, the service was absolutely top class. Russian Railways have put in a lot of time and effort in providing the best training to their employees and this is clearly visible in the service you get even on a train ride that is far away from Moscow and St. Petersburg.

Here’s a tip for those looking to buy souvenirs in Russia: Train attendants sell a whole host of goodies on board. I managed to buy two high-quality podstakanniks, one with an Alexander Pushkin theme and another with an embossed Russian double-headed eagle (symbol of the Russian Empire). The tea glass holders, which came with a glass, were made in Russia and were of far better quality than the ones the railways served tea in. On top of that, the prices were much lower than what they would have been in a souvenir shop. 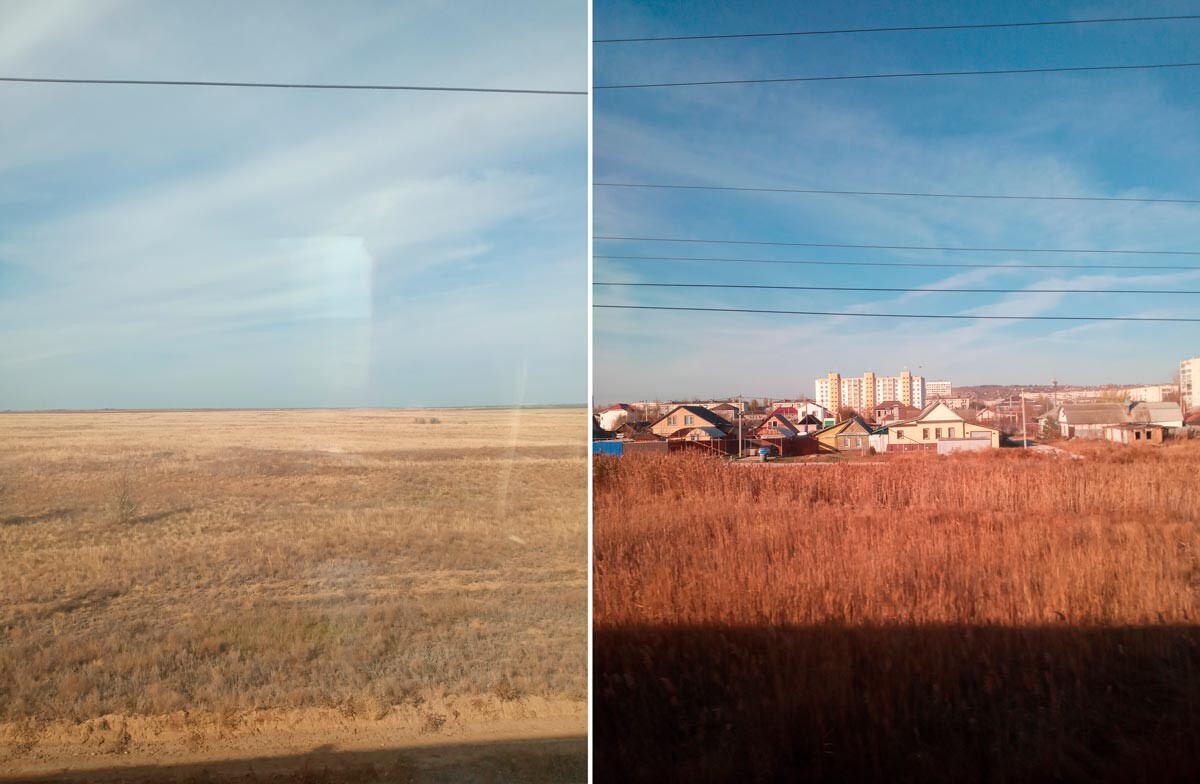 Our train ran almost parallel to the Volga-Don Canal for a while, so we were able to get a few glimpses of this ship canal. As the train headed southwest, steppe-like passage gave way to cultivated agricultural land. Unfortunately, by the time the train entered the more scenic parts of the country it was already dark.

We had a scheduled stop of 96 minutes at a station called Kavkazskaya, which was a two-floor red brick building that absolutely oozed character. We were told by the attendant in our wagon that there were some nice cafes outside the station, so we decided to try our luck. Both Olga and I had a distinct feeling that we had been to this station before, but neither of us had. Then it struck me that the interiors of the station had a resemblance to the one that was portrayed in the Eldar Ryazanov-directed 1982 movie ‘Station for Two’.

We were told that the town, which was named after geographer and revolutionary anarchist Prince Pyotr Kropotkin, was on the right bank of the Kuban River and was actually a pleasant place to spend some time in. As tempted as we were to wander off a bit and see what surprises this town had in store for us, we did the sensible thing of going back to our train after dinner.

How I almost missed my train 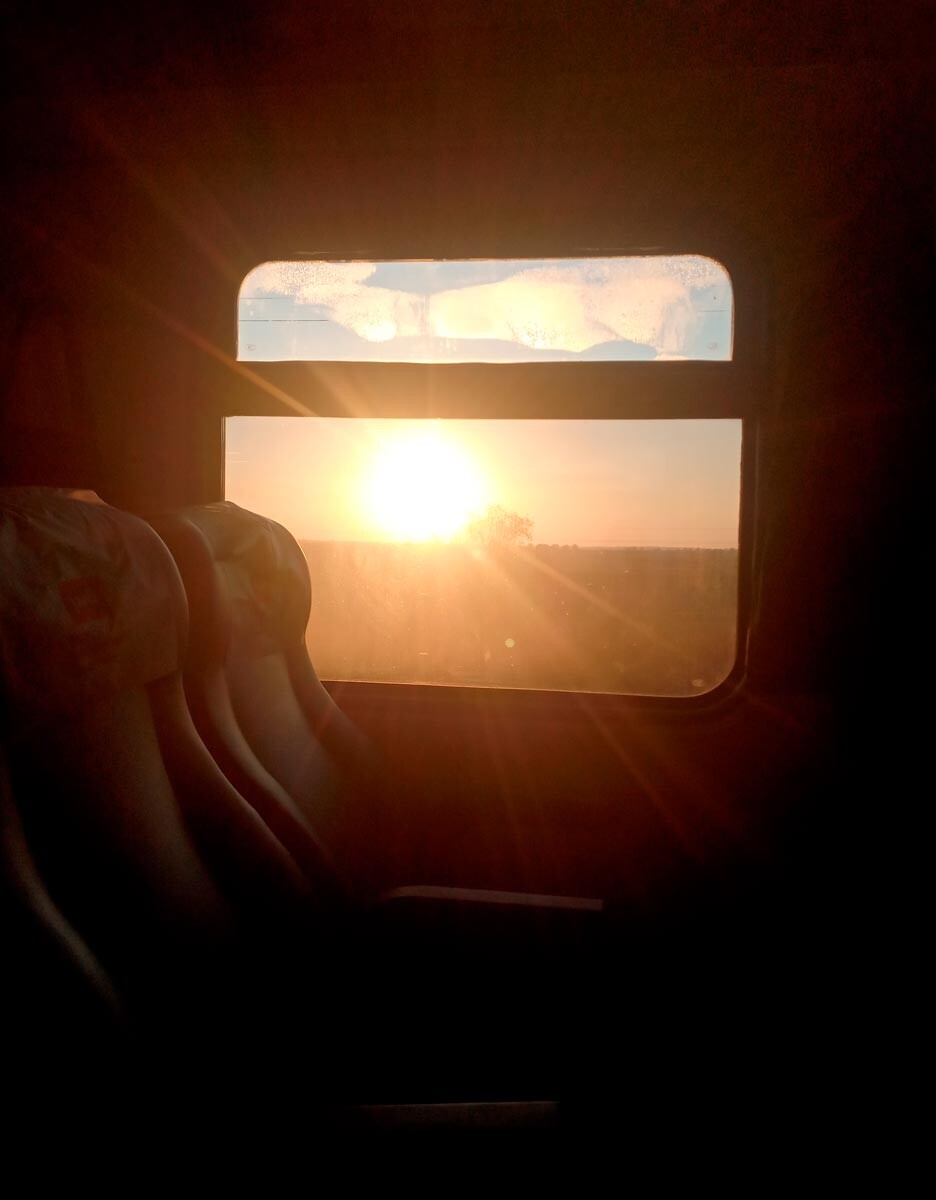 I’ve always had an irrational fear of being left behind by a moving train on a platform. However, when I saw how heavy the suitcases that my new friends in the coupe were carrying, I could not help but offer to assist them. The map in the wagon said the stop was for 40 minutes, so I knew that I could easily help them take their suitcases to a taxi at the station entrance. After carrying two incredibly heavy suitcases up a long flight of stairs and down to the station’s main entrance, I wished Ludmilla and her seven-year old daughter Anna a happy new life in Goryachiy Klyuch. It was 2:30 AM and my mind was not functioning at its best. As soon as I heard a horn, I imagined it was my train and that I was going to miss it. I made a run for it and by the time I reached the platform I realized that the horn was from a different train. There were at least another 20 minutes before my train left!

Around 6 am when we were in deep slumber, the wagon attendant knocked on our door and told us that the train was approaching Sochi. If she hadn’t woken us up, we would have ended up travelling for another half an hour to the final destination of Adler.

These two brief train journeys reignited a sense of adventure in us. We somehow need to find a way to take the Trans-Siberian again; this time from the European part of Russia to the eastern end of the country!