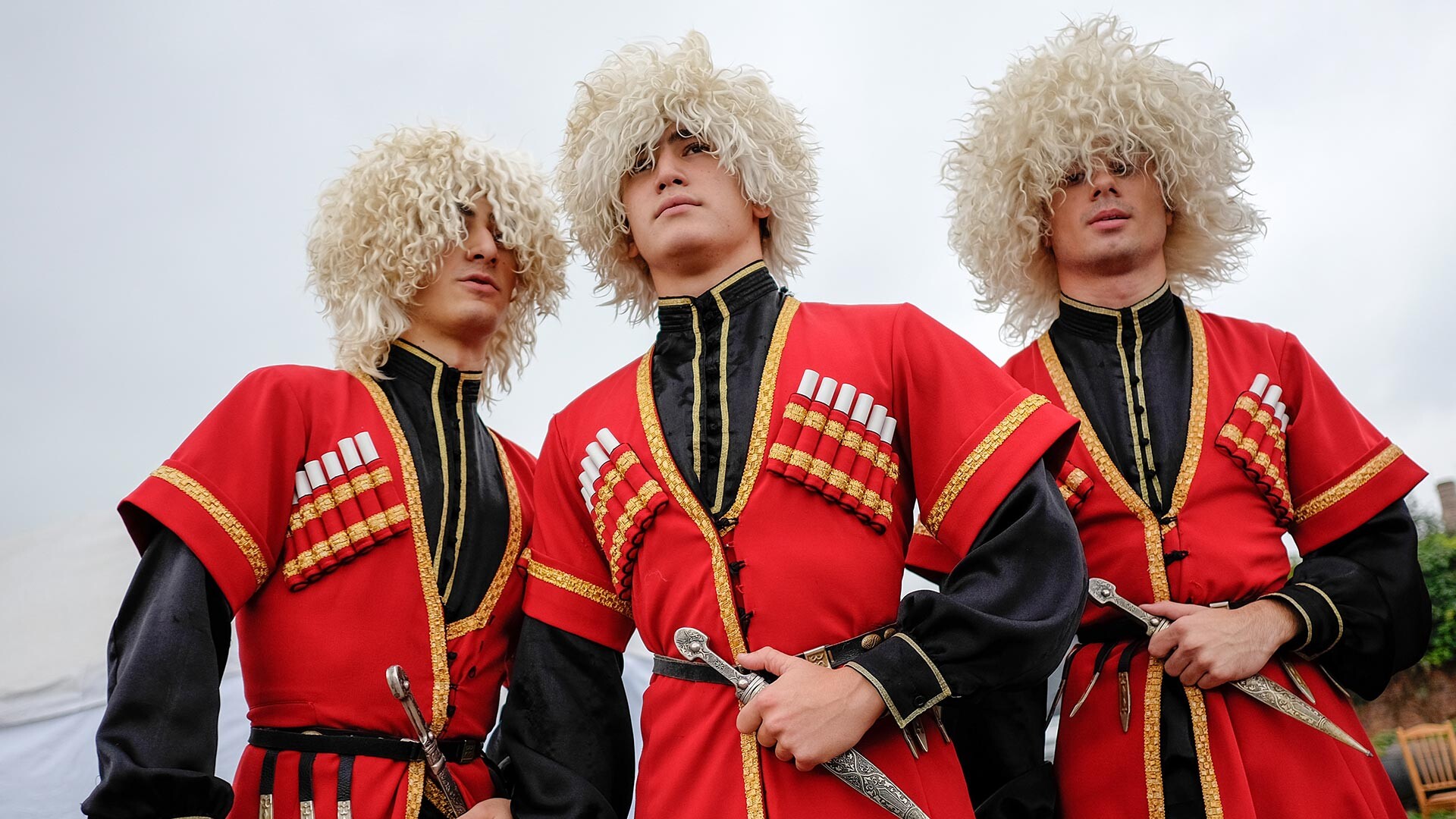 Nikolay Khizhnyak/TASS
There are almost 200 peoples in Russia and about 50 of them live in different regions of the Caucasus.

The Russian Caucasus is home to a huge number of ethnic groups, each with their own history, language, culture and gastronomy. There are almost mono-ethnic national republics, such as Ingushetia, where Ingush people make up 95% of the locals, and multinational republics like Dagestan, with about 30 peoples and 14 state languages. What are the Caucasian ethnic groups considered to be the most numerous?

Grozny. the capital of Chechnya.

This is one of the largest ethnic groups not only in the region, but also the country. However, the majority of them live in the Chechen Republic - more than 1.2 million (of 1.5 million in total). Chechens also live in neighboring Dagestan and Ingushetia. The Chechen language includes seven dialects and many local sub-dialects.

Chechens call themselves ‘Nokhchiy’ (“people”) and ‘Vainakh’ (“our people”) - this is the common name for the Chechen and related Ingush people. Chechen society consists of ‘teips’, that include several families united by kinship ties. Most Chechens are Muslim. Women cover their heads with the traditional headscarf (however, it’s not customary to cover the face) and wear long bright dresses. Men also don’t wear shorts on the street. 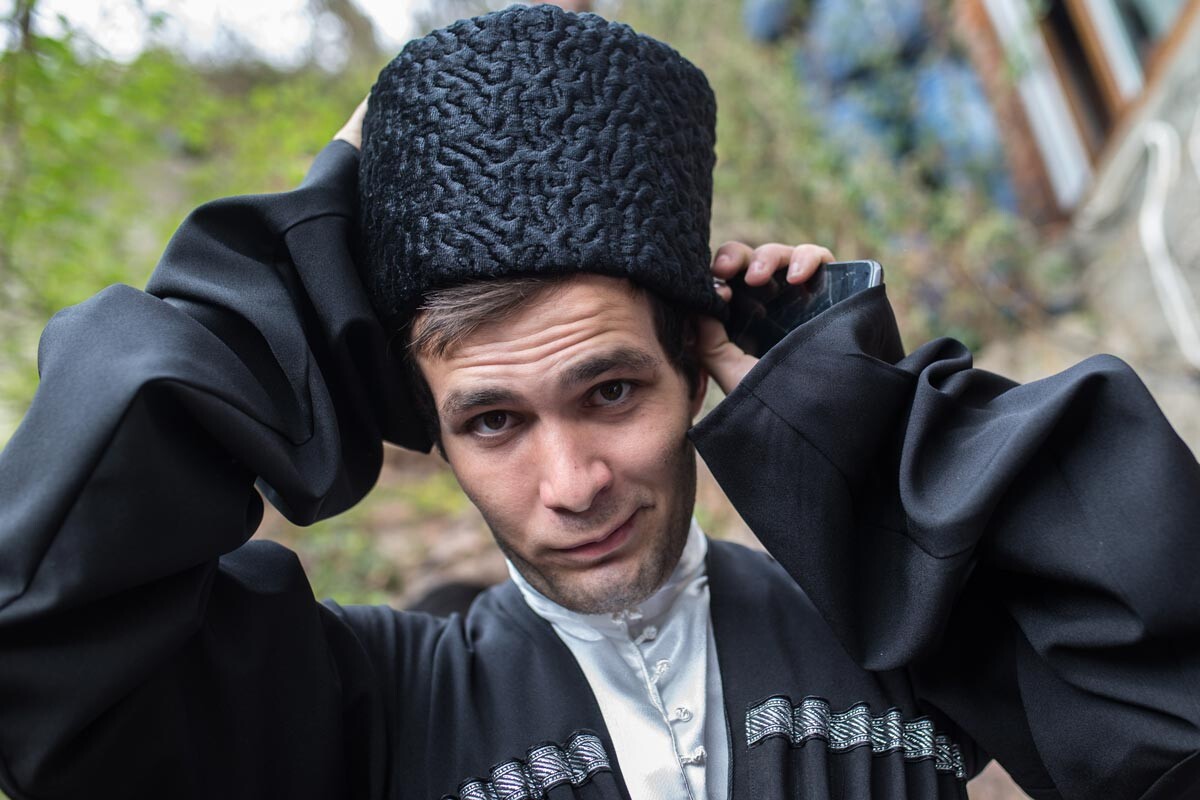 At the Karachay-Cherkessia Republic.

The Circassians (also often called Adyghe or Cherkess) have several sub-ethnoses: Adygeans, Kabardins, Shapsugs and Circassians. There are about 2.5 million of them in the world (some sources estimate up to 5 million) and, in Russia, about 720,000. More than half of them live in Kabardino-Balkaria (Kabardins), also in Adygea (Adygeans), Karachay-Cherkessia (Circassians), Krasnodar Territory (Shapsugs) and other regions. Circassian peoples have one language with different regional dialects. At the same time, sub-ethnoses have the same traditions, customs and culture. The Circassians are also mostly Muslim, however, there are some Orthodox believers in North Ossetia. By the way, the traditional Caucasian men’s costume is also named after Circassians - the ‘cherkesska’. 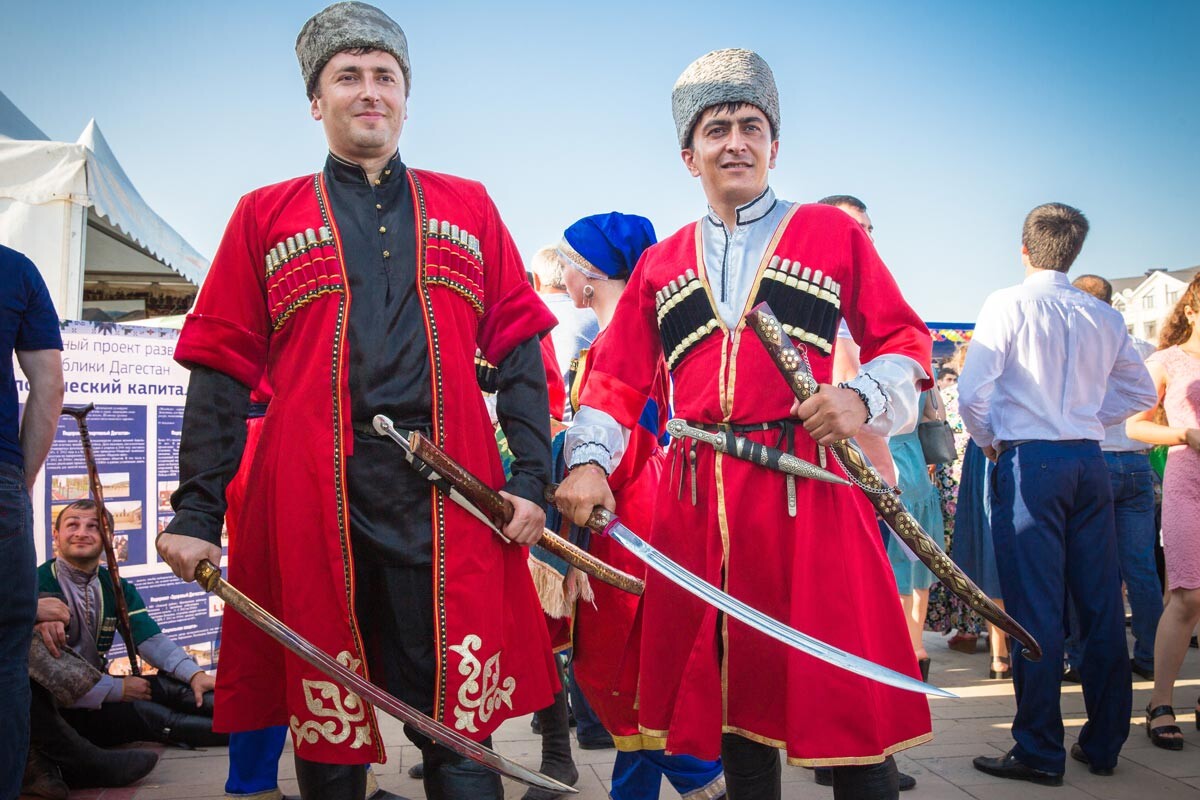 Avars at the celebration of the Day of Unity of the Peoples of Dagestan in the city of Derbent.

The most numerous ethnic group in Dagestan are the Avars. In this republic, they number about 900,000 people (from an estimated 1 million in the world), i.e. about a quarter of the Dagestan population. Avar is also the most widespread language in Dagestan, but its regional dialects can vary greatly. Many modern Avars practice Sunni Islam. One of the most famous modern Avars in the world is UFC champ Khabib Nurmagomedov. 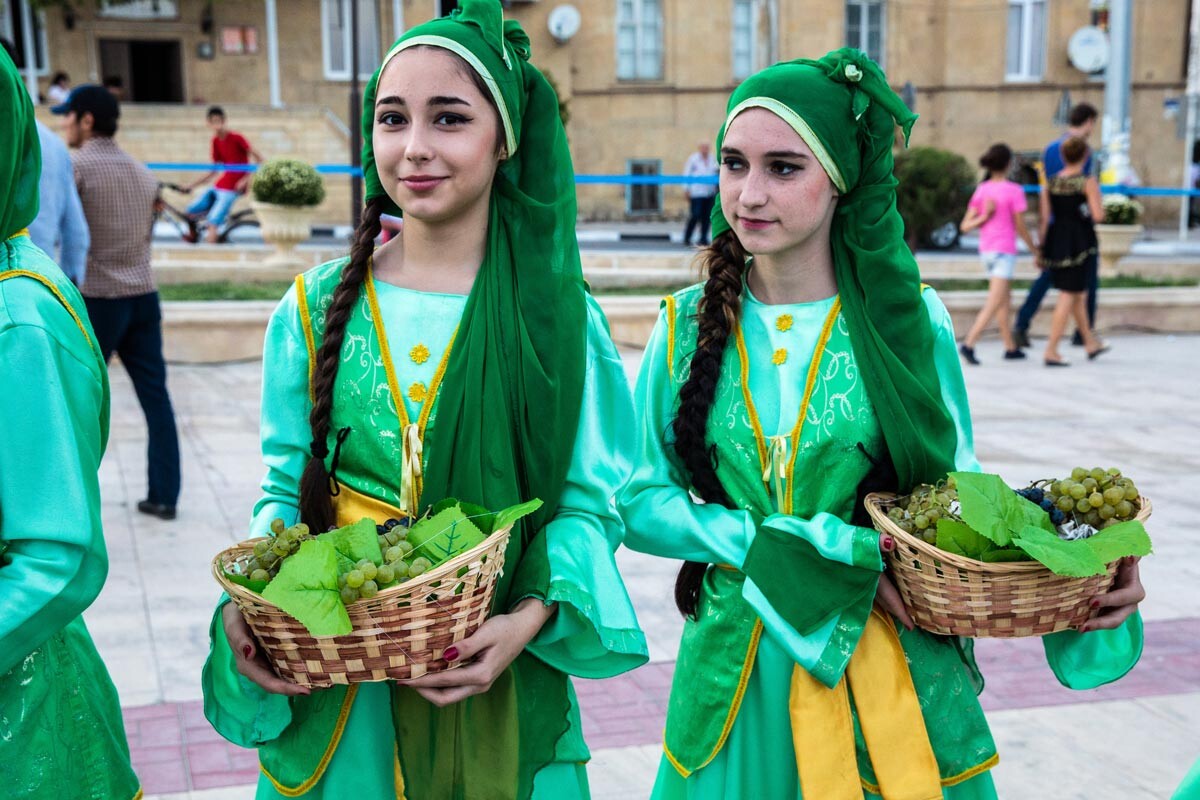 The second largest ethnic group in Dagestan after the Avars are the Dargins - about 500,000 (from an estimated 600,000 worldwide). The Dargin culture and language have a long history: the first manuscripts with Dargin words date back to the 13th century.

The modern Dargin alphabet has 46 letters, but the language is divided into many dialects. Like the Avars, the Dargins are Sunnis.

There are subethnic groups among Dargins; for example, Kubachins - inhabitants of the village of Kubachi, known as a center of folk crafts (here’s the story about the Kubachi scarves and the village). 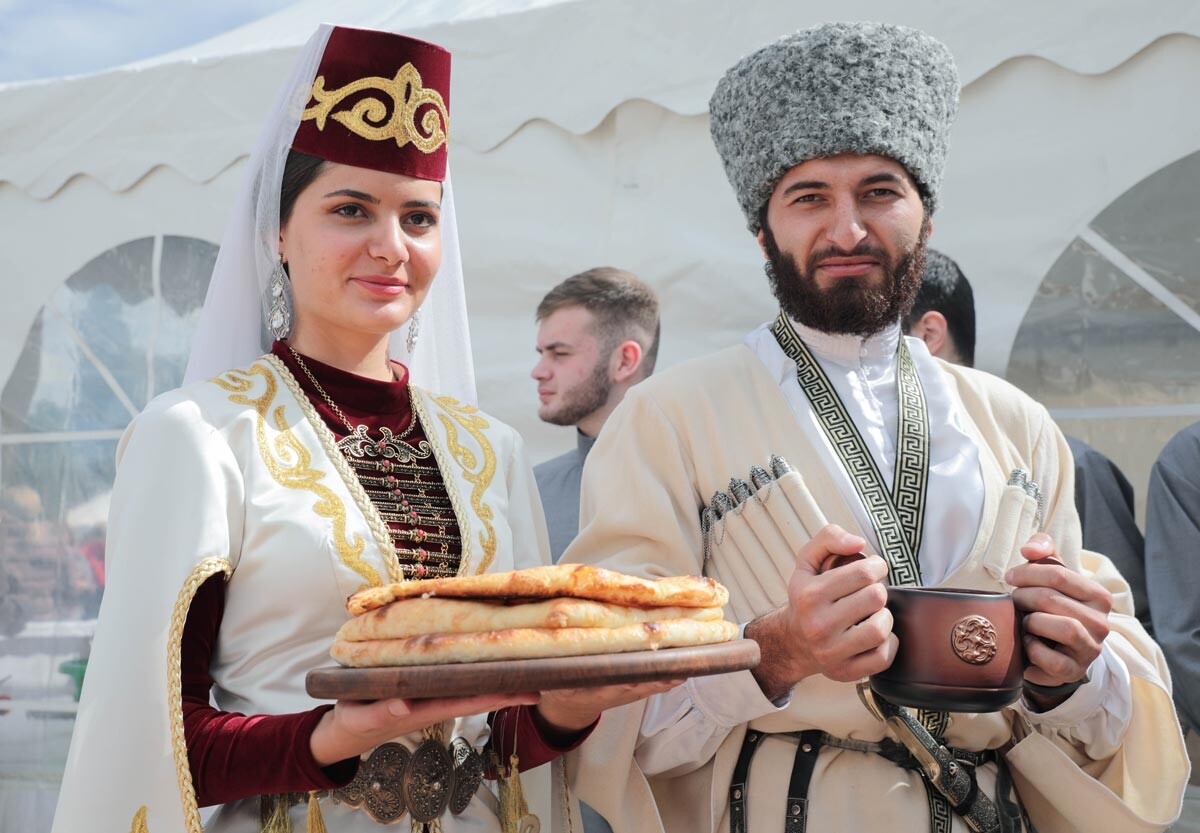 In the Republic of North Ossetia, most of the population are Ossetians, who consider themselves descendants of the ancient Alan people. (read about the Alans here)

The Ossetian language belongs to the Iranian group. Most Ossetians are Orthodox, combining this religion with ancient Caucasian customs, with only 10% Muslim, as opposed to the neighboring regions.

By the way, the main dish of the local cuisine, the Ossetian pie, has gained popularity all over the country and can be found in almost every city in Russia. 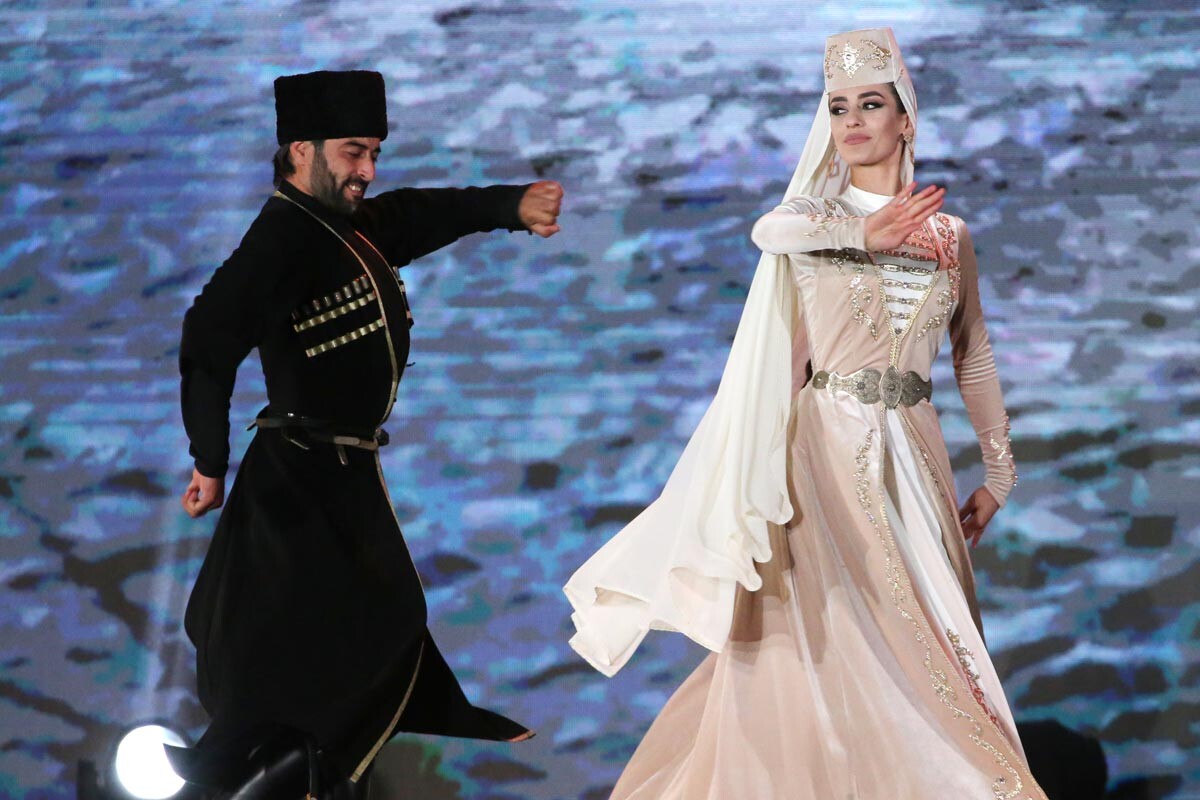 Artists of the "Ingushetia" ensemble.

Most of the Ingush live in the Republic of Ingushetia (about 400,000 people), with another 300,000 living in other Russian regions and abroad. The Ingush call themselves ‘Ghalghaj’ (Ghalghai). This word, according to linguists, comes from the word ‘Ghala’ - a tower and means the inhabitants of towers. Ingush watchtowers are indeed impressive monuments of national architecture preserved throughout this mountainous republic.

Also they call themselves ‘Vainakh’, like the Chechens. The Ingush also have their own language, which is considered official in the republic, in addition to Russian. Local media also broadcast in Ingush. 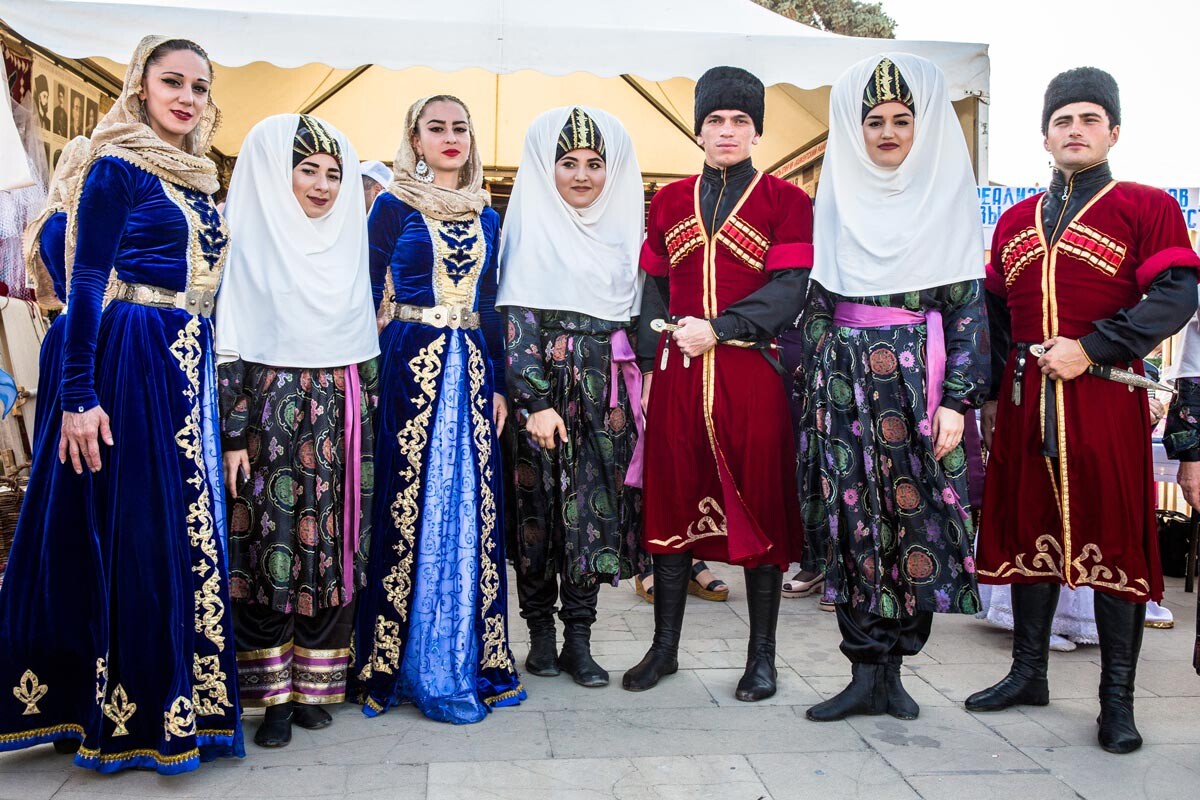 The Kumyks are the largest Turkic people of the Caucasus. There are an estimated over 500,000 people, 430,000 of whom live in Dagestan (this is the third largest ethnic group in the republic). The historical area where they live is called ‘Kumikia’ (between the Terek and Sulak rivers ). The Kumyk language is one of the oldest written languages in the Caucasus and, until the early 20th century, it was the language of interethnic communication in the North Caucasus - it was even studied by famous writer Leo Tolstoy, who visited the region. 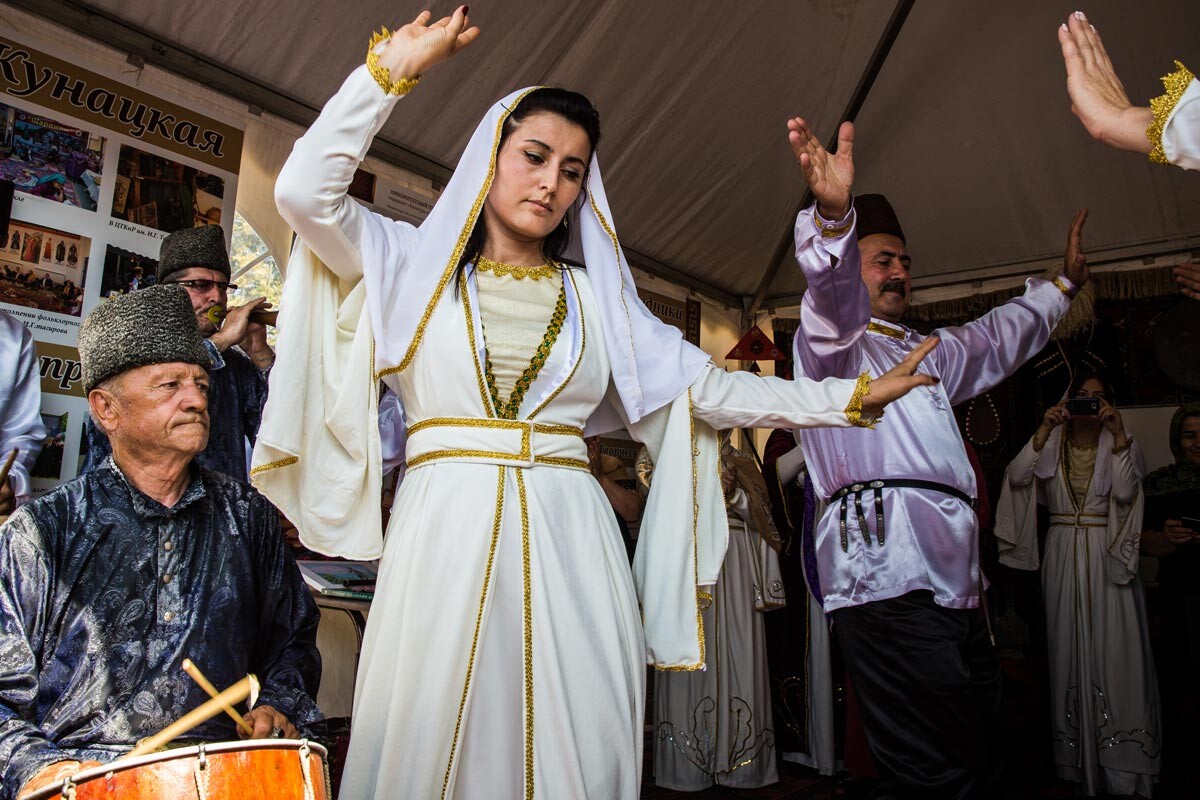 You may have heard the popular dance in the Caucasus - the ‘Lezginka’? No event, from a wedding to a big concert, can do without this folk performance. It comes from the name of the Lezgin people. Historically, they live in the southeast of Dagestan, as well as in the north of Azerbaijan. Almost 400,000 Lezgins live in Dagestan and a 100,000 more in other Russian regions. Also, there are about 200,000 Lezgins in Azerbaijan. Which is why modern Lezgins often speak not only Russian and Lezgin, but also Azerbaijani. 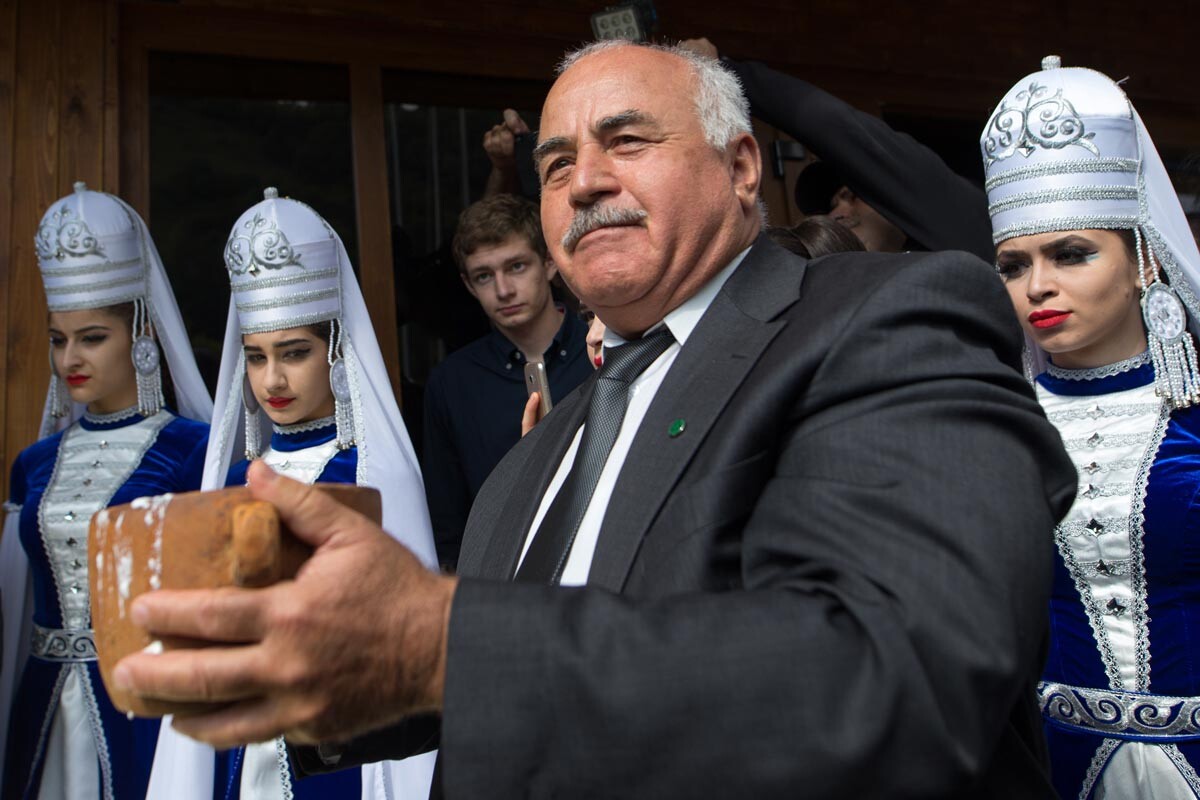 At the festival of Karachay-Balkar culture, 2017.

These are a Turkic ethnic group who, for the most part, live in the mountain republic of Karachay-Cherkessia. There are currently about 200,000 Karachays in total. Scholars believe that their ancestors were Alans. At least, many ancient Alanian words have survived in the Karachay language and the word ‘Alan’ itself is used in Karachay addressing.

In the life of modern Karachays, great attention is paid to the observance of moral norms, the folk traditions, as well as hospitality. All guests must always be fed with ‘khychins’ - fried flatbread with vegetable or meat filling! 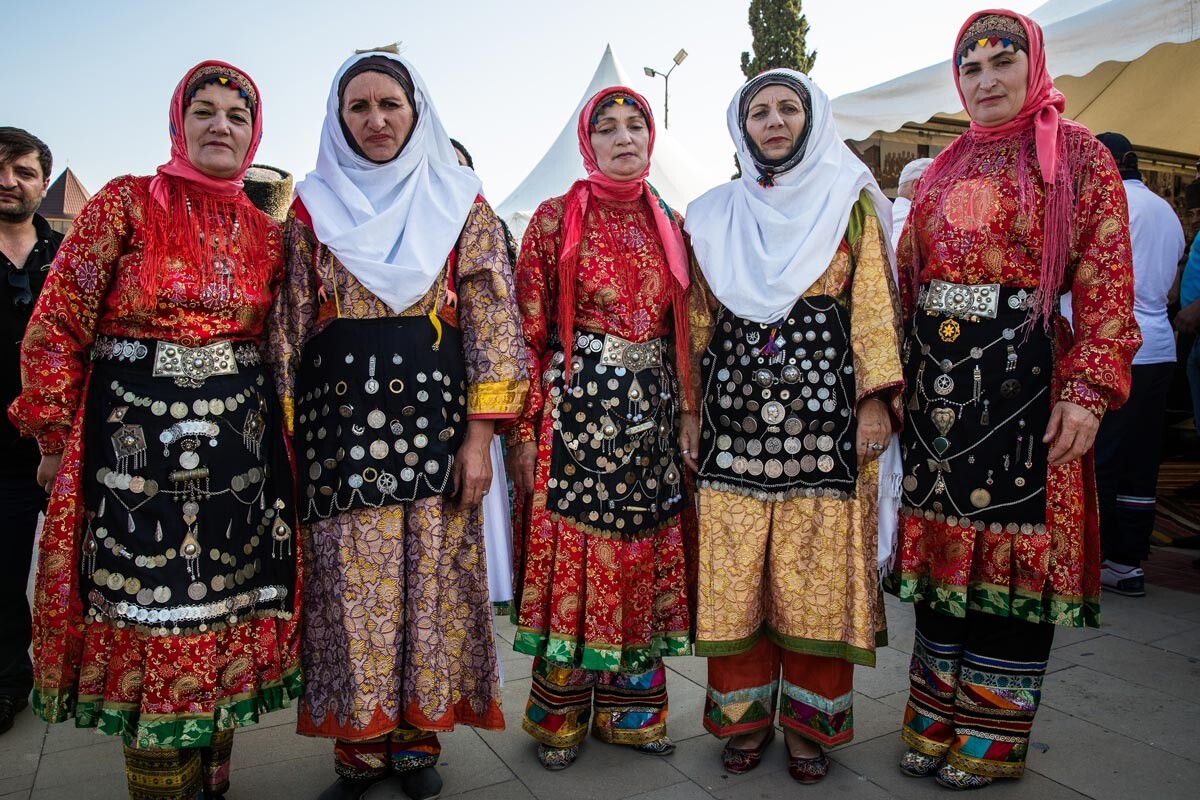 One of the largest ethnic groups of Dagestan are also the Laks. They number about 200,000 and most of them live on their historical territory - Lakiya, which is located near Kumykiya.

The first mosque in the Caucasus is also located in Lakiya, in the village of Kumukh. It was built in the 8th century and well preserved to this day.