Church of the Intercession at Fili: A wondrous landmark from Peter the Great’s early reign (PHOTOS)

Travel
William Brumfield
Architectural historian and photographer William Brumfield takes a very detailed look at the 328-year-old church located in West Moscow, one of the first constructed in Naryshkin Baroque, a particular style of Baroque architecture and decoration that became fashionable in Moscow from the 17th century to the early 18th century. 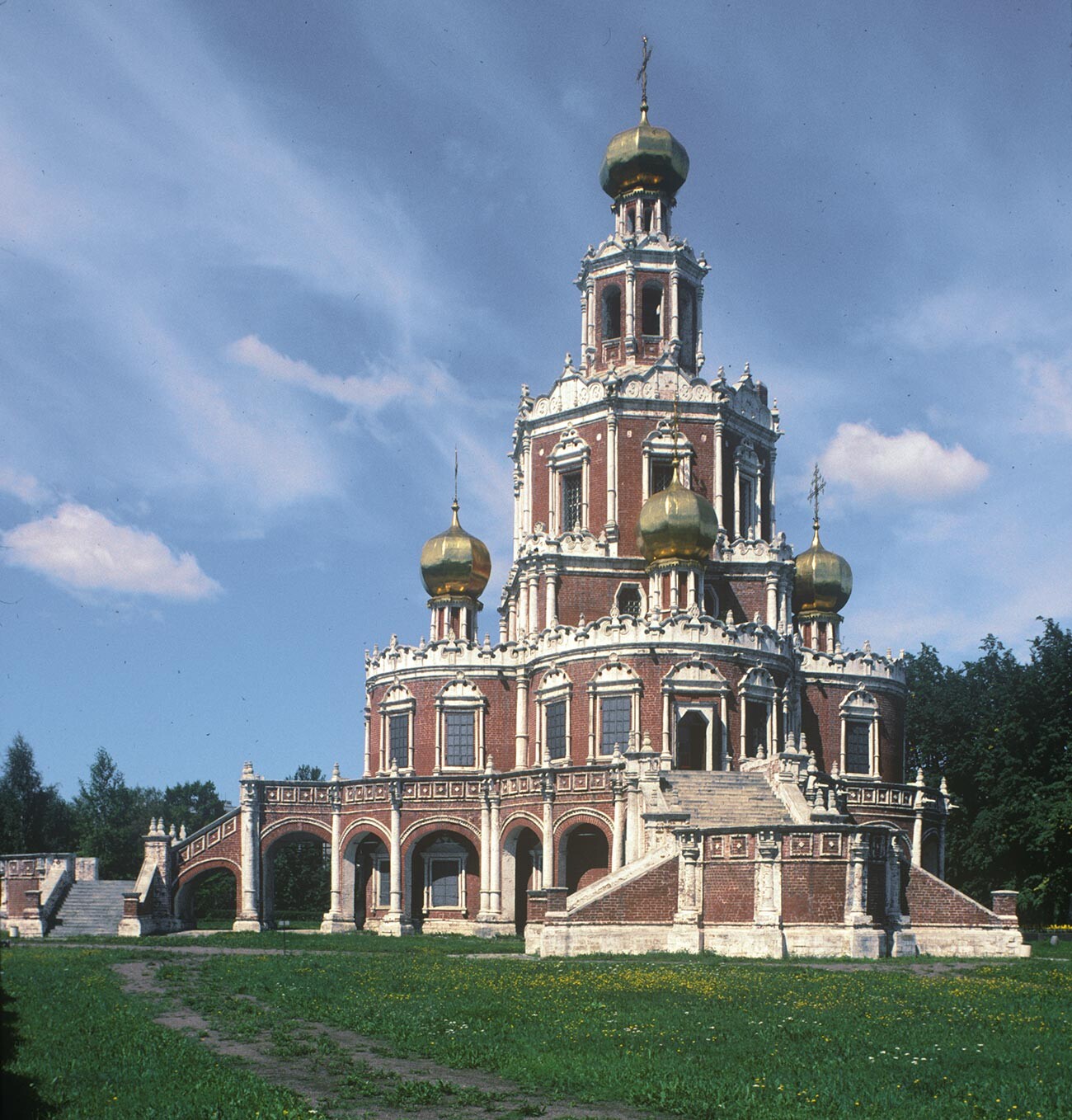 At the beginning of the 20th century, Russian chemist and photographer Sergey Prokudin-Gorsky developed a complex process for vivid color photography (see box text below). His vision of photography as a form of education and enlightenment was demonstrated through his images of architectural monuments in the historic sites throughout the Russian heartland. 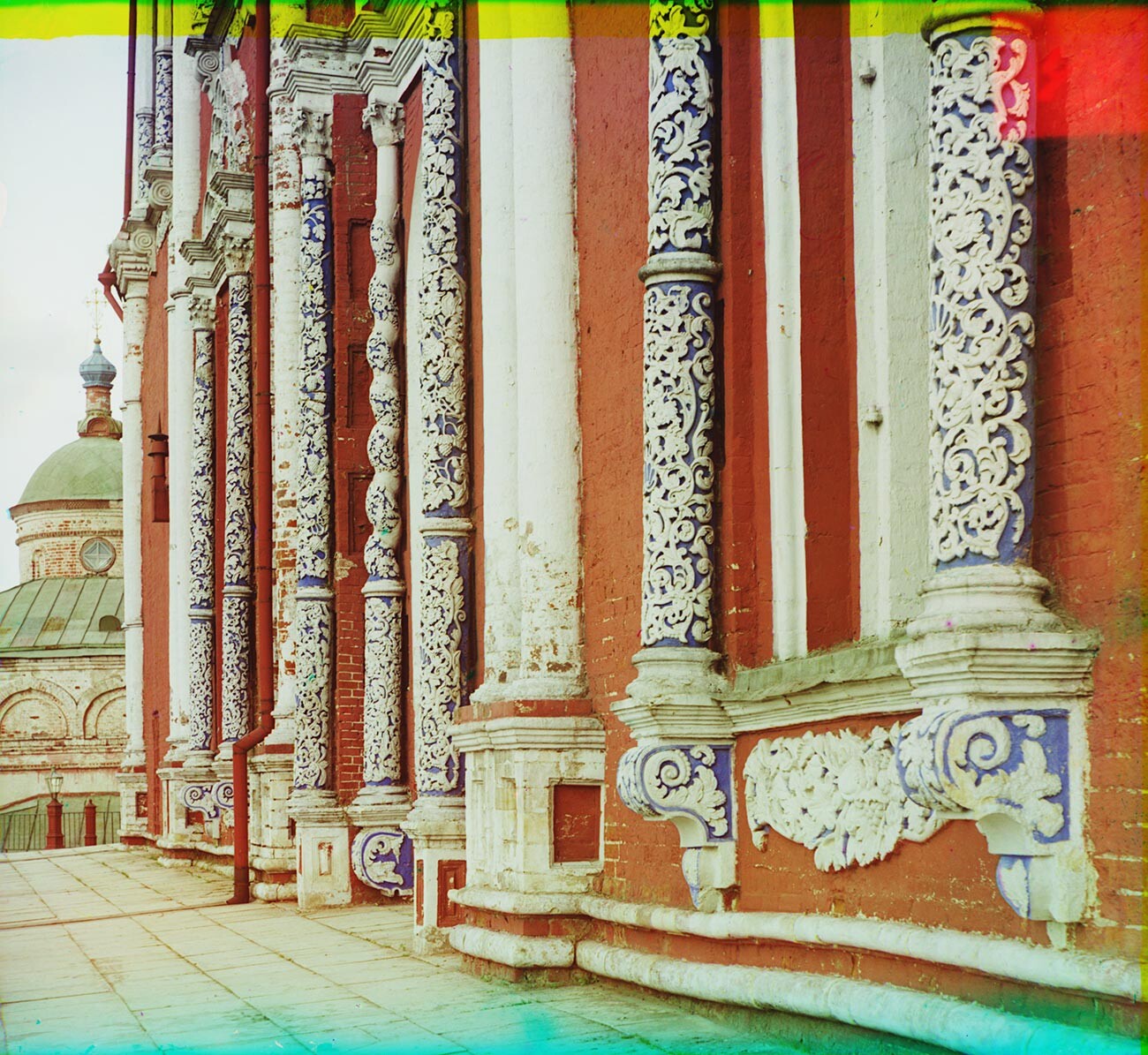 Ryazan Kremlin. Cathedral of the Dormition of the Virgin. North facade with carved limestone columns. Summer 1912

As part of his journeys along the Oka River (a tributary of the Volga) in the summer of 1910, Prokudin-Gorsky took numerous photographs in Ryazan, a provincial capital located 190 km southeast of Moscow. Ryazan’s greatest monument is the Cathedral of the Dormition of the Virgin, rebuilt at the end of the 17th century to a design by the remarkable serf architect Yakov Bukhvostov. 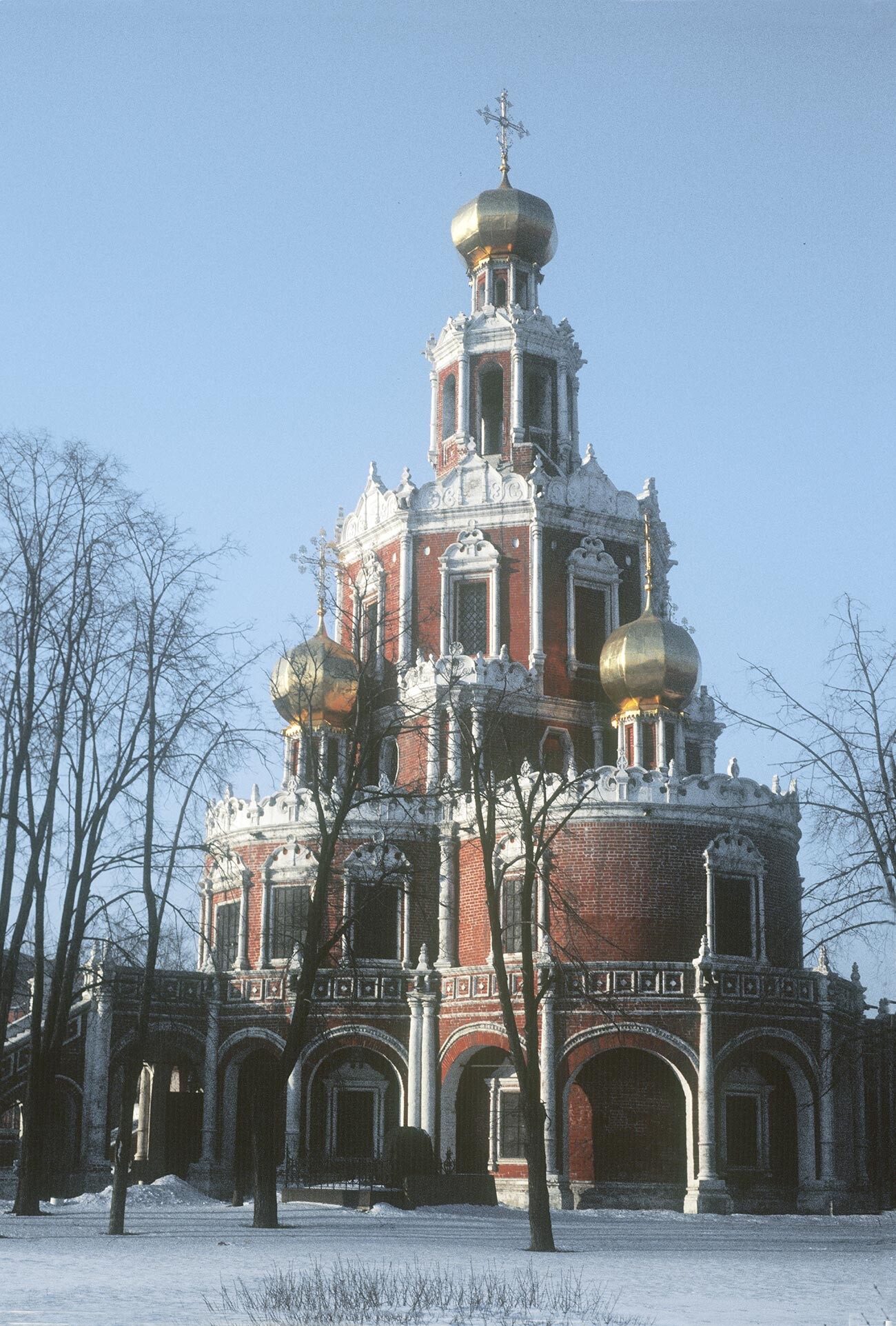 Church of the Intercession at Fili. Southeast view. February 1, 1984

Prokudin-Gorsky’s photographs of the Dormition Cathedral show a highly decorative application of limestone carving on the cathedral’s enormous brick facades. A similar blending of structure and elaborate decoration is visible in Bukhvostov’s creation of a tower church at the suburban Moscow estate of Ubory, which belonged to the prominent nobleman Peter Vasilevich Sheremetev, ‘the Younger’. 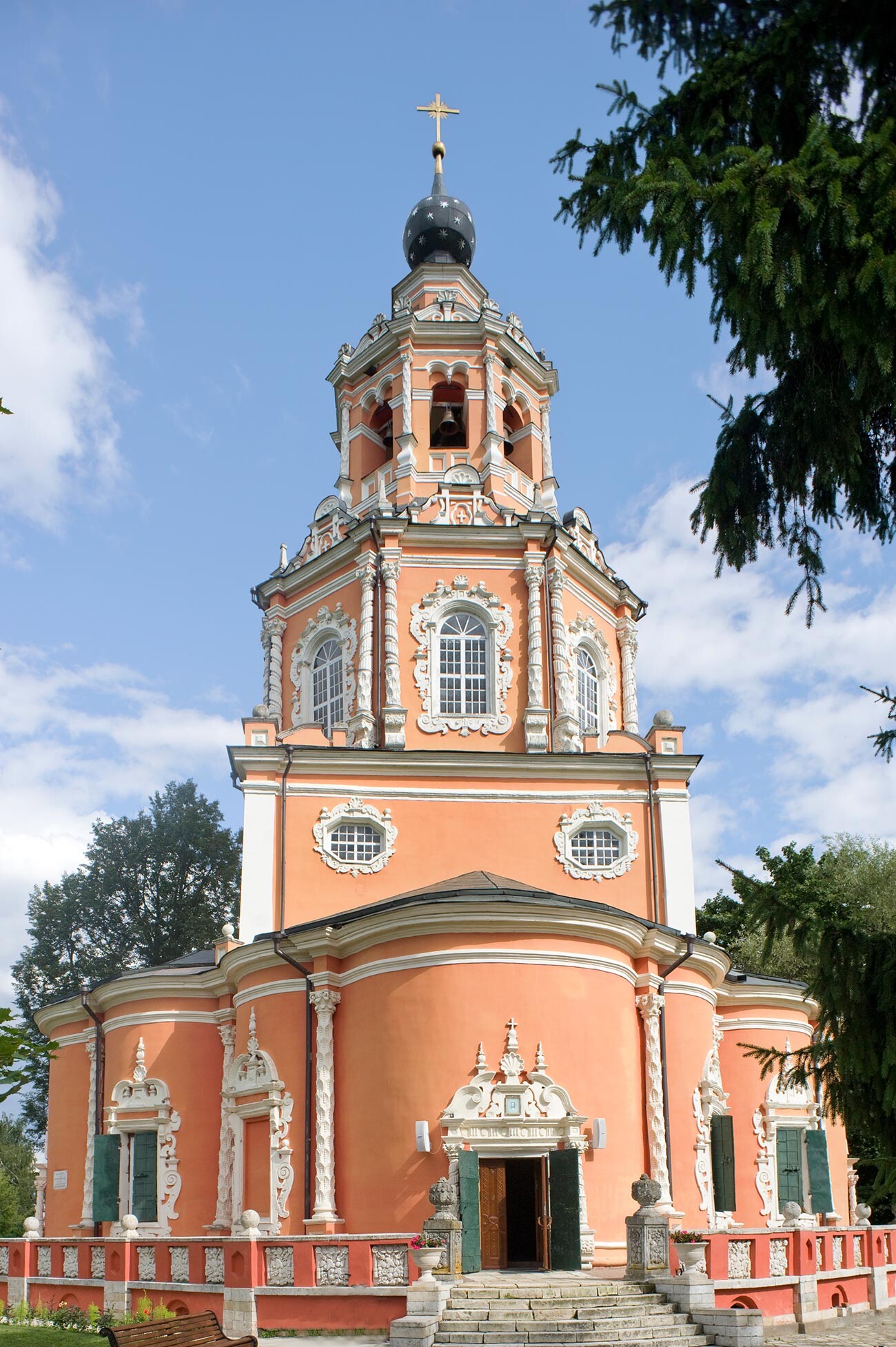 Ubory (near Moscow). Church of the Miraculous Icon of the Savior, west view. August 16, 2013

During the same period, tower churches were constructed on other estates in the Moscow area, the most famous of which is the Church of the Intercession of the Virgin built in 1690-1693 at the village of Fili. Although now one of the western districts of Moscow, in the late 17th century, Fili was the site of an estate belonging to the influential boyar Lev Kirillovich Naryshkin (1664-1705), uncle of Peter I (the Great; 1672-1725). 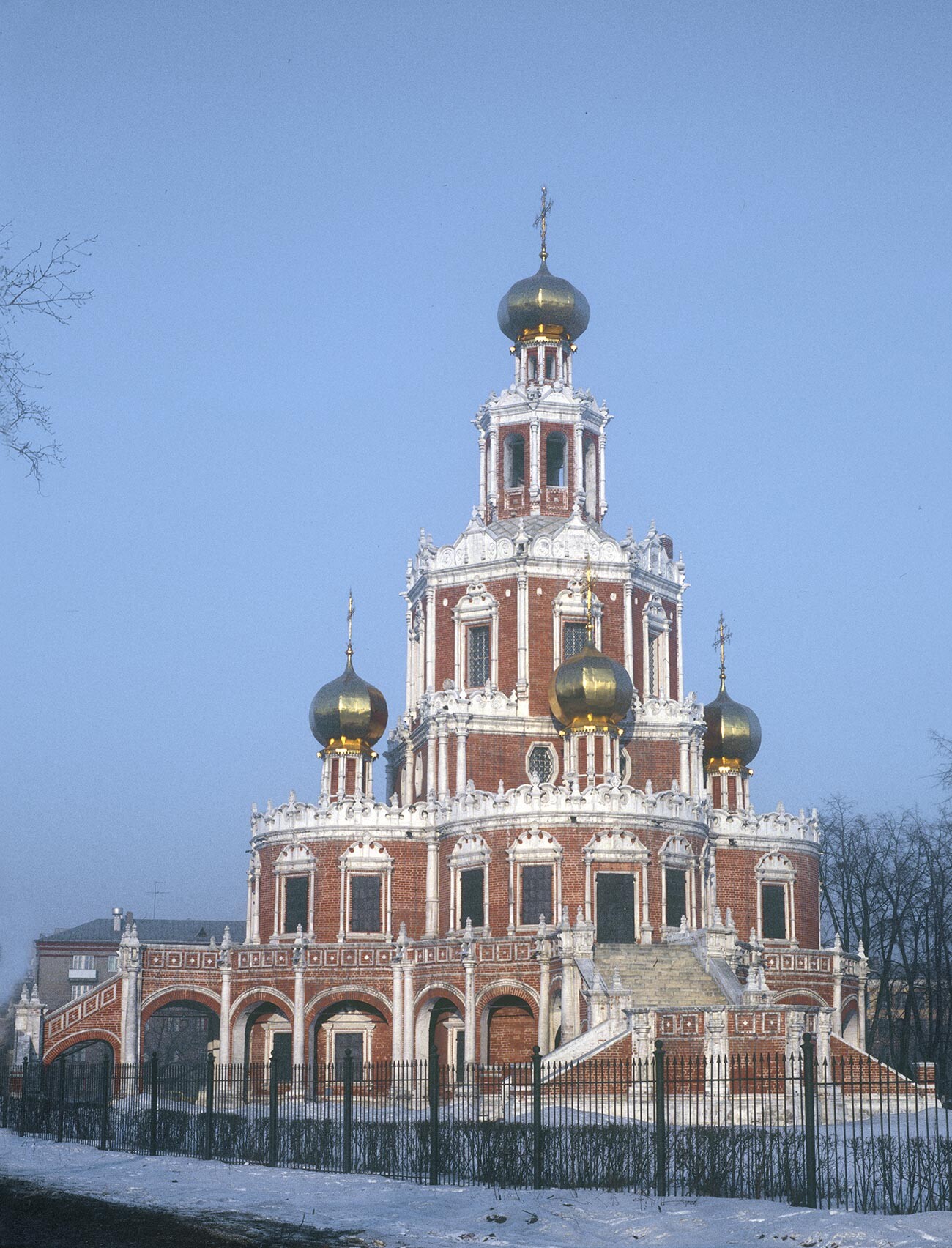 Church of the Intercession at Fili. South view. February 1, 1984

The Intercession Church at Fili has been the subject of much lyrical praise for its extraordinary beauty. There is no documentary evidence as to the identity of its architect, but the ornamental mannerism of its design, like that of the church at Ubory, reflects fundamental changes in Russian architecture initiated during the reign of Peter the Great. 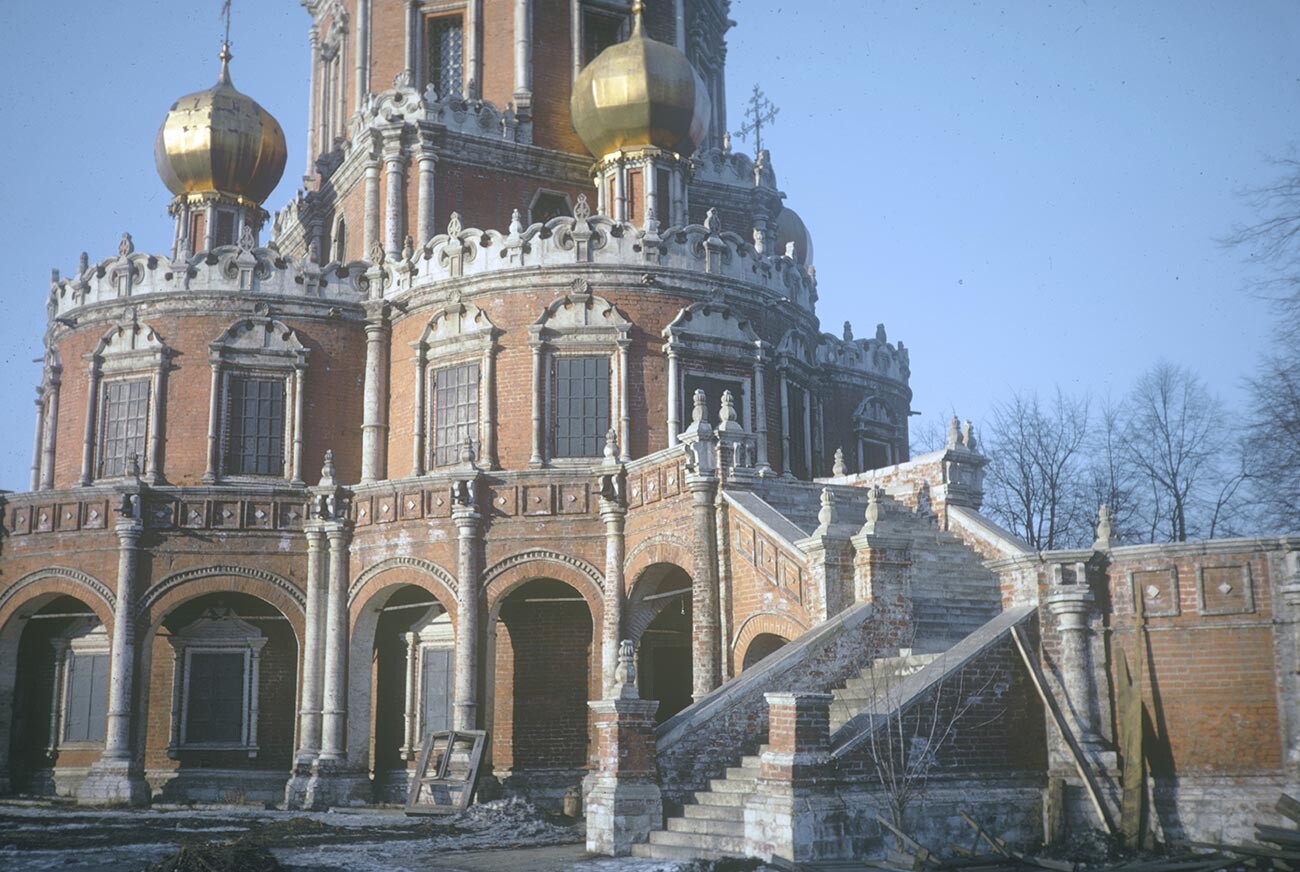 Church of the Intercession at Fili. Southwest view with lower tiers & entrance to "winter church," under restoration. March 8, 1972

The transformation in Russian society and culture at the end of the 17th century was a premonition of more radical changes to come with Tsar Peter’s founding of the new capital of Russia, St. Petersburg, in 1703. The tower estate churches sponsored by Russia's most powerful families can be seen as an expression of changing cultural identity, a receptivity to new ideas associated with Western culture.

The ensuing style is often designated the ‘Naryshkin Baroque’, after the boyar family that built such churches on its estates. Natalya Kirillovna Naryshkina (1651-94) was the second wife of Tsar Alexey Mikhailovich (1629-76) and mother of Peter I. 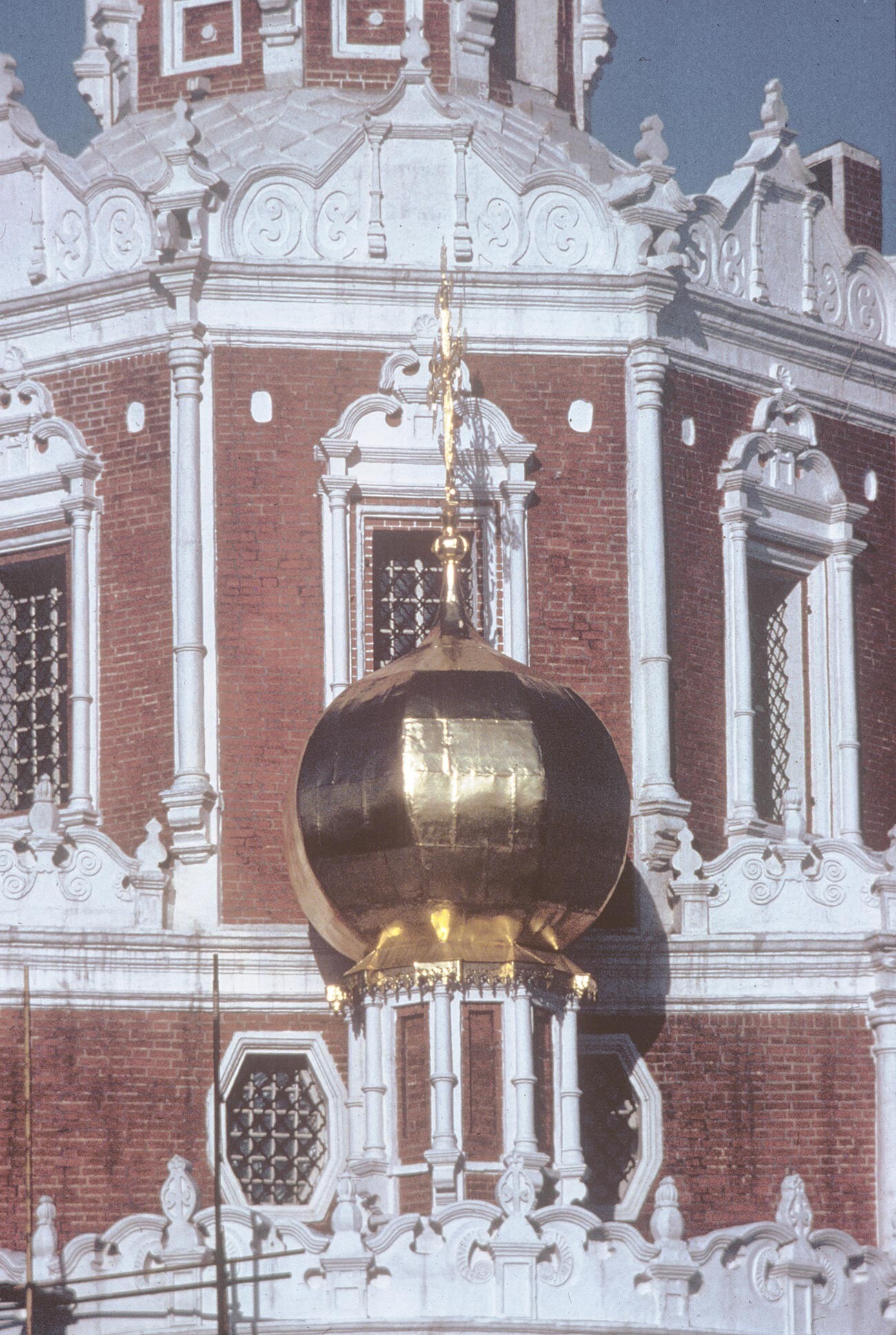 Church of the Intercession at Fili. South facade, cupola over projecting lobe. February 19, 1980

With the death of Tsar Alexey in 1676, the Russian court entered a period of dangerous uncertainty that involved a complicated power struggle between the families of Alexey’s two spouses, the Miloslavskys and the Naryshkins. Broadly speaking, the Naryshkins were considered more receptive to Western ways and that perception elicited a furious reaction among conservative segments of the populace.

During this struggle, a number of Naryshkins were killed in 1682, but Natalya and her younger brother Lev survived and eventually prevailed. With the emergence in 1689 of young Peter as Russia’s primary ruler, the Naryshkin family had triumphed and for a brief period attained immense power that is reflected in the churches that they built.

That same year (1689) Lev Naryshkin was granted the estate at Fili, named after the small Filka River and, the following year, work began on the new estate church. Indeed, legend has it that Naryshkin intended the church as a votive offering for his survival in 1682. Certainly, it was intended to proclaim the power and majesty of the royal clan. 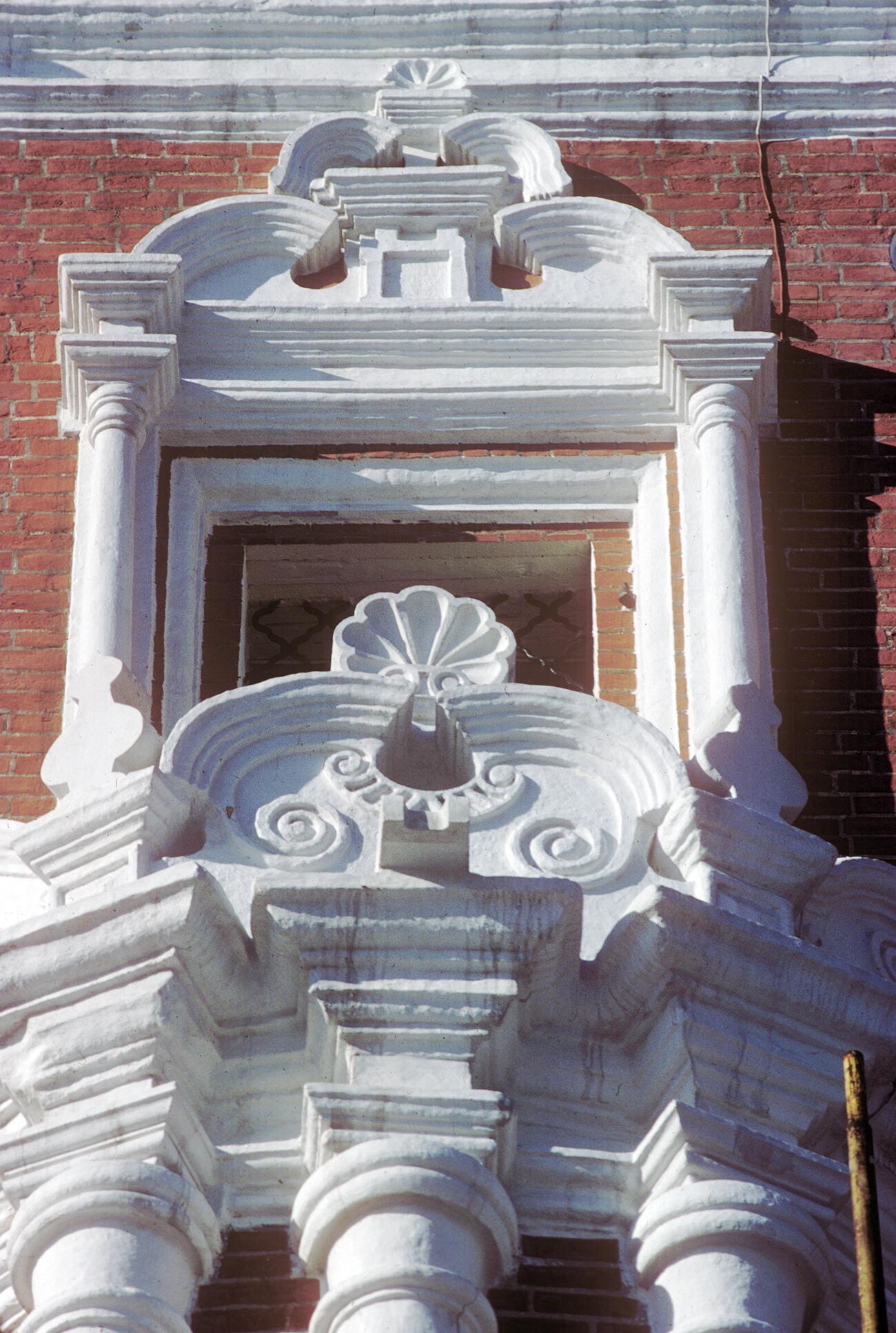 The terms ‘Naryshkin style’ and ‘Naryshkin Baroque’ arose among 20th-century Russian art historians as a phenomenon within the broader designation of ‘Moscow Baroque’. There is much debate about the accuracy of these terms, especially in view of their differences with European baroque architecture. 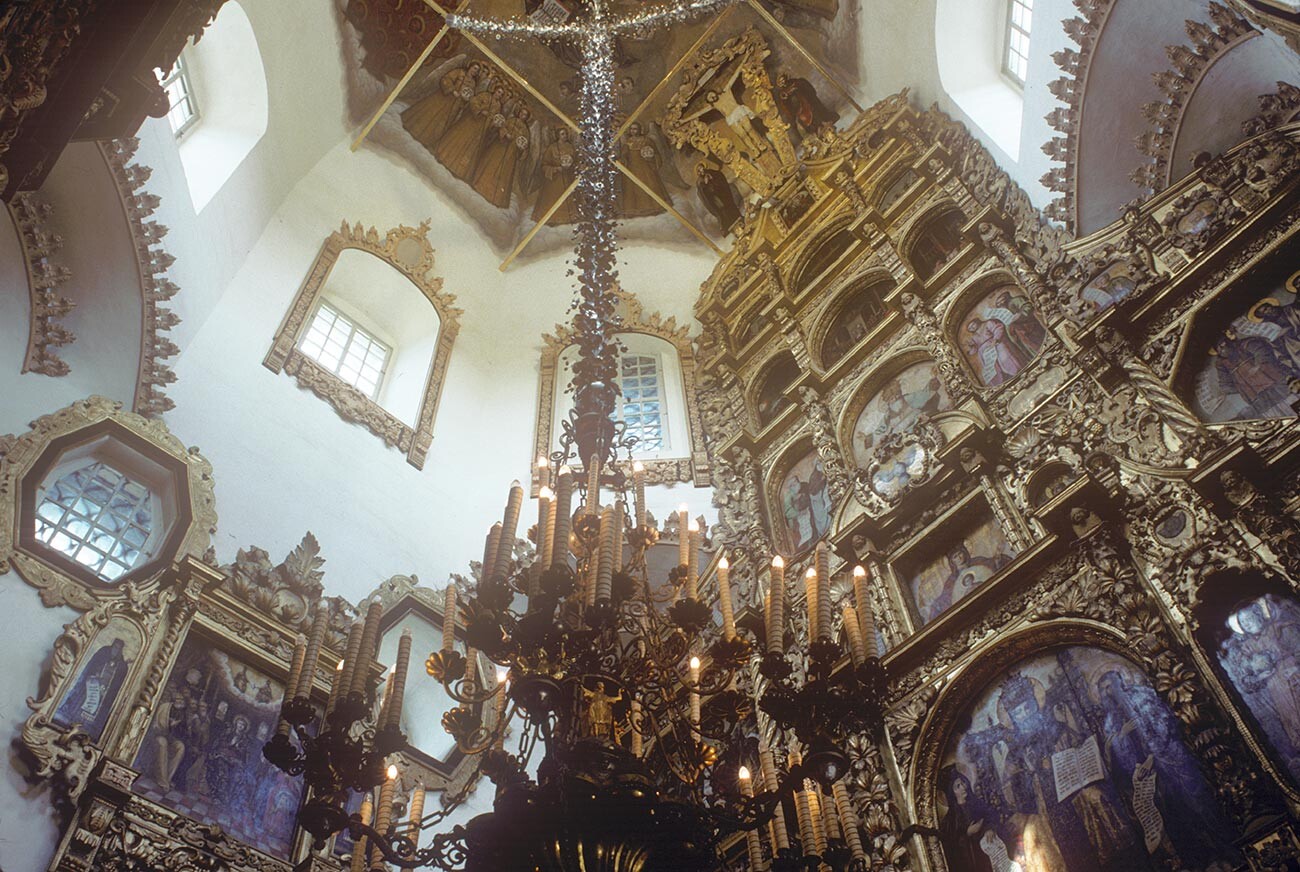 Church of the Intercession at Fili. Icon screen with crucifix. July 2, 1995

For most of the 17th century, Russian church architecture generally displayed a highly decorative, mannered style with little structural innovation. This approach suited the traditional tastes of the merchants, craft guilds and churchmen who supported church construction.

The ‘Naryshkin style’ generally refers to ornamental tower churches erected on the estates of a small group of grandees, such as the Naryshkins and Sheremetyevs, who were oriented toward western culture and closely associated with Tsar Peter. Composed of octagonal tiers above a central cube, these distinctive tower churches first appeared in masonry construction at the beginning of the 1680s. 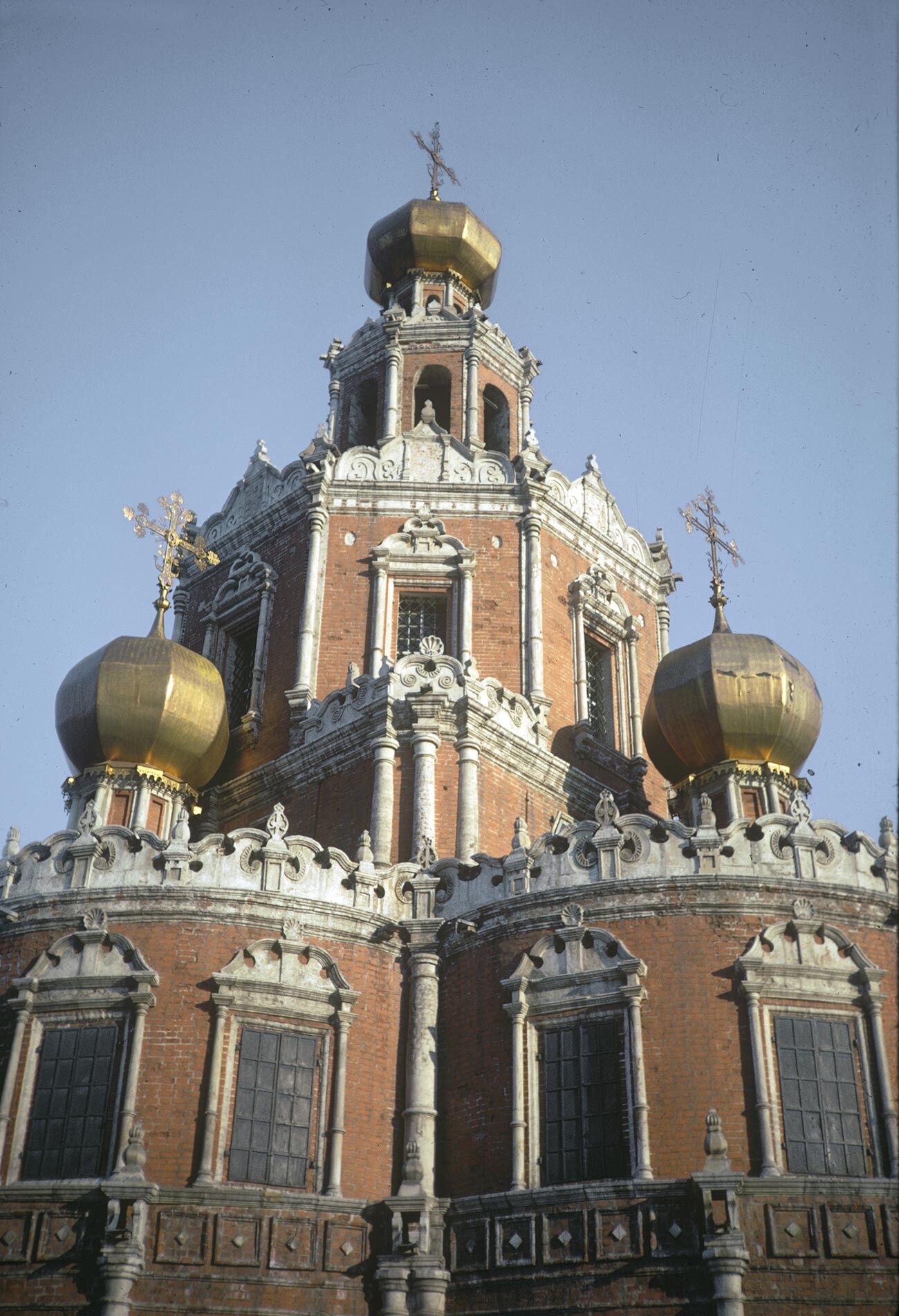 Church of the Intercession at Fili. Northwest view. March 8, 1972

The two dozen or so late 17th-century tower churches known to have been built ranged from early awkward examples with little ornamentation to the lavish display at Fili. These tiered structures represented a new variant of the vertical silhouette that had appeared in some of the most distinctive examples of Russian church architecture. There were also wooden tower churches, although it is difficult to determine when the earliest wooden examples appeared. 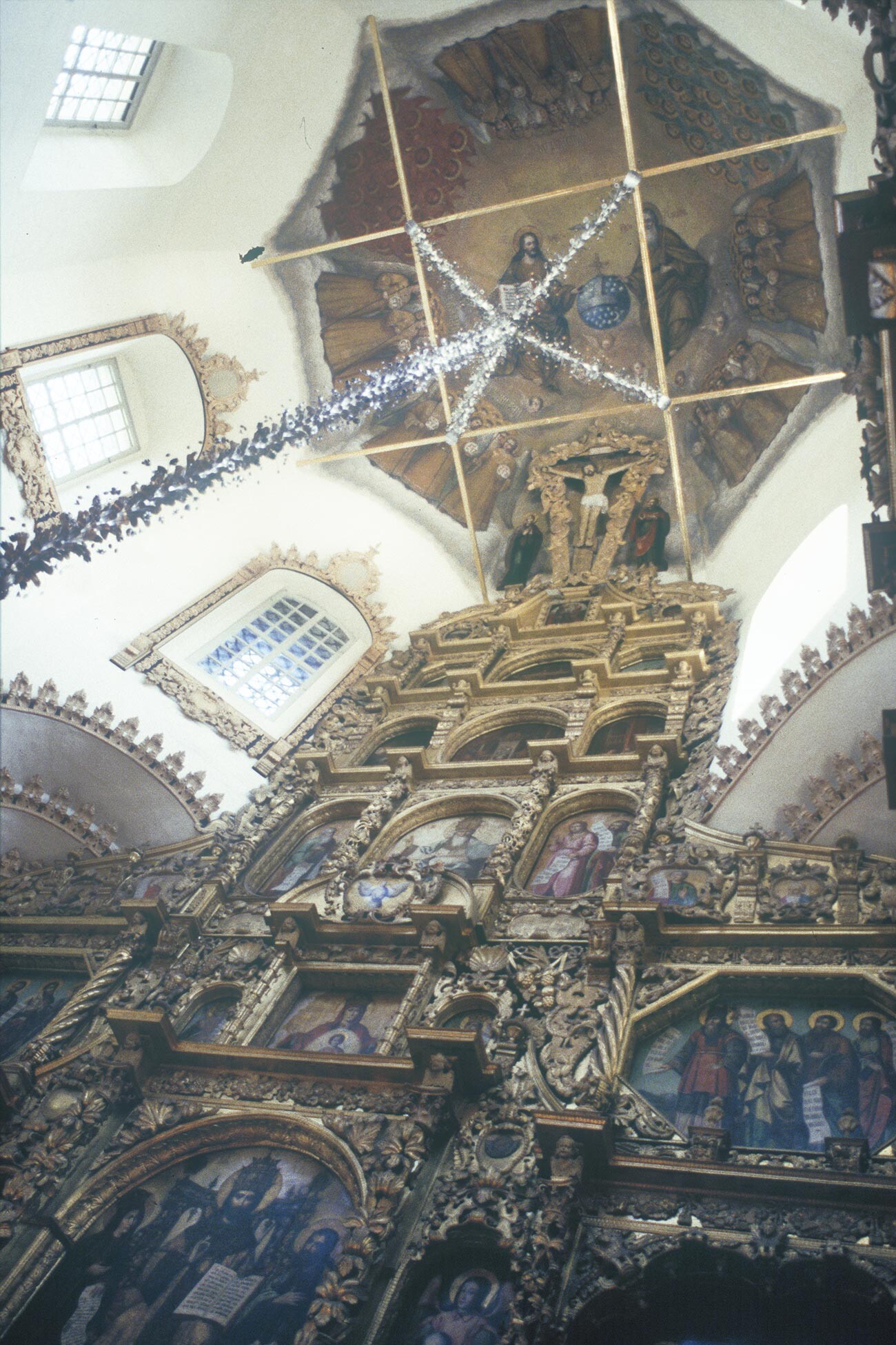 For many observers, the Intercession Church at Fili is the complete expression of the “Naryshkin” style, where the symmetrical structural outlines are enhanced by the balance of carved limestone cornices, window surrounds, and attached columns. This ordered approach to ornament, together with an increasing understanding of the classical system of orders, suggests a new sophistication of taste on the part of both patron and builder.

Not only does the Intercession Church at Fili reinterpret the centralized tower structure, but it also integrates the bell tower (usually attached on the west end of the Orthodox parish church) by placing it in an octagonal tier above the main structure. This allows a symmetry on the first level with the apse (containing altar) at the east end balanced by a vestibule of identical form on the west end. 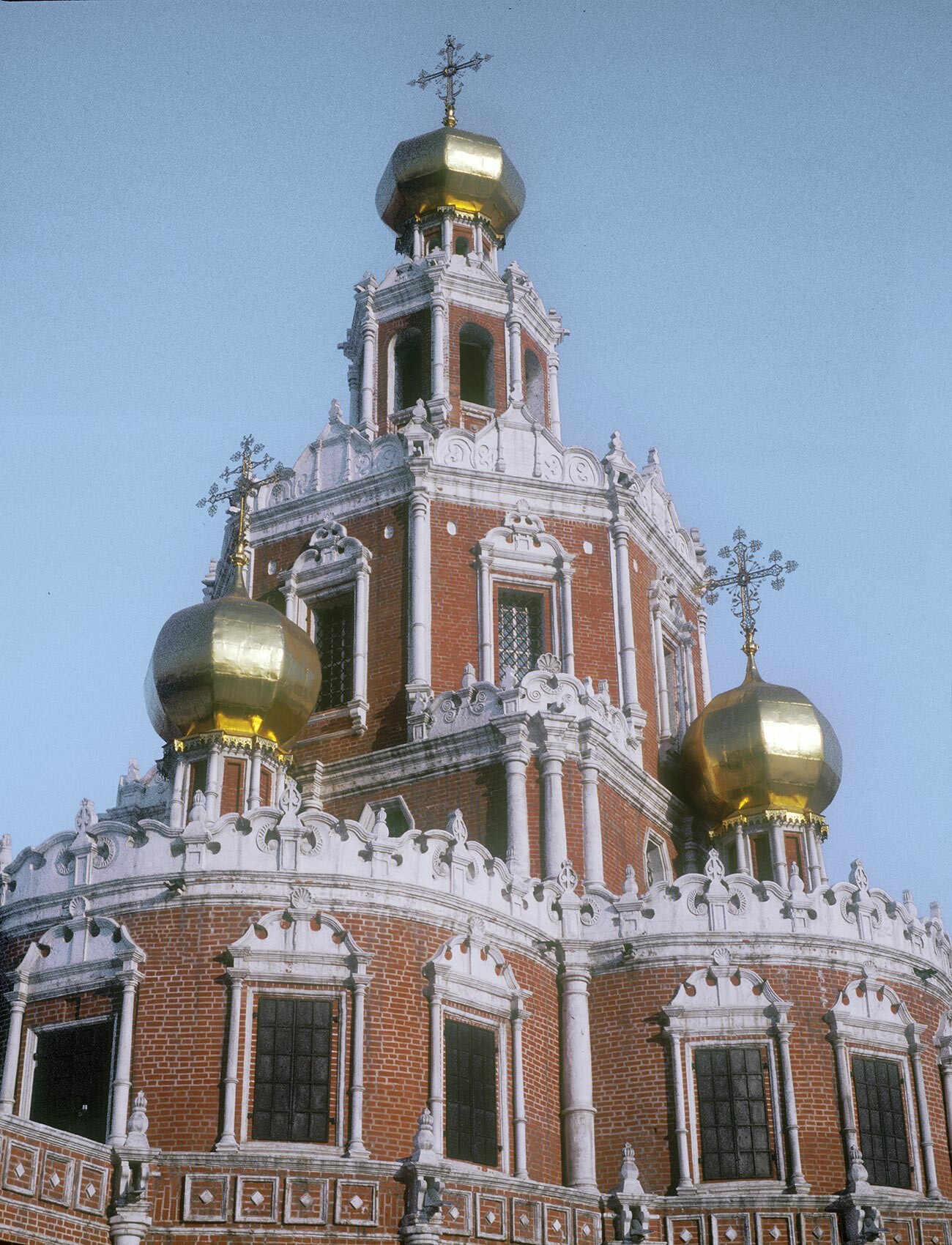 Church of the Intercession at Fili. Southwest view. February 1, 1984

The Intercession Church at Fili also has lobes projecting from the north and south façades of the main structure, thus creating a tetrafoil pattern. The plan is both decorative and tightly organized, a cube with four rounded extensions, of which the east and west are slightly elongated.

Each of these lobes - with the exception of the apse in the east - has a stairway with balustrade descending from the elegant terrace supported by an open arcade that encircles the structure. The arcade also provided access to a ground level ‘winter church’, so named because it could be heated for winter services. 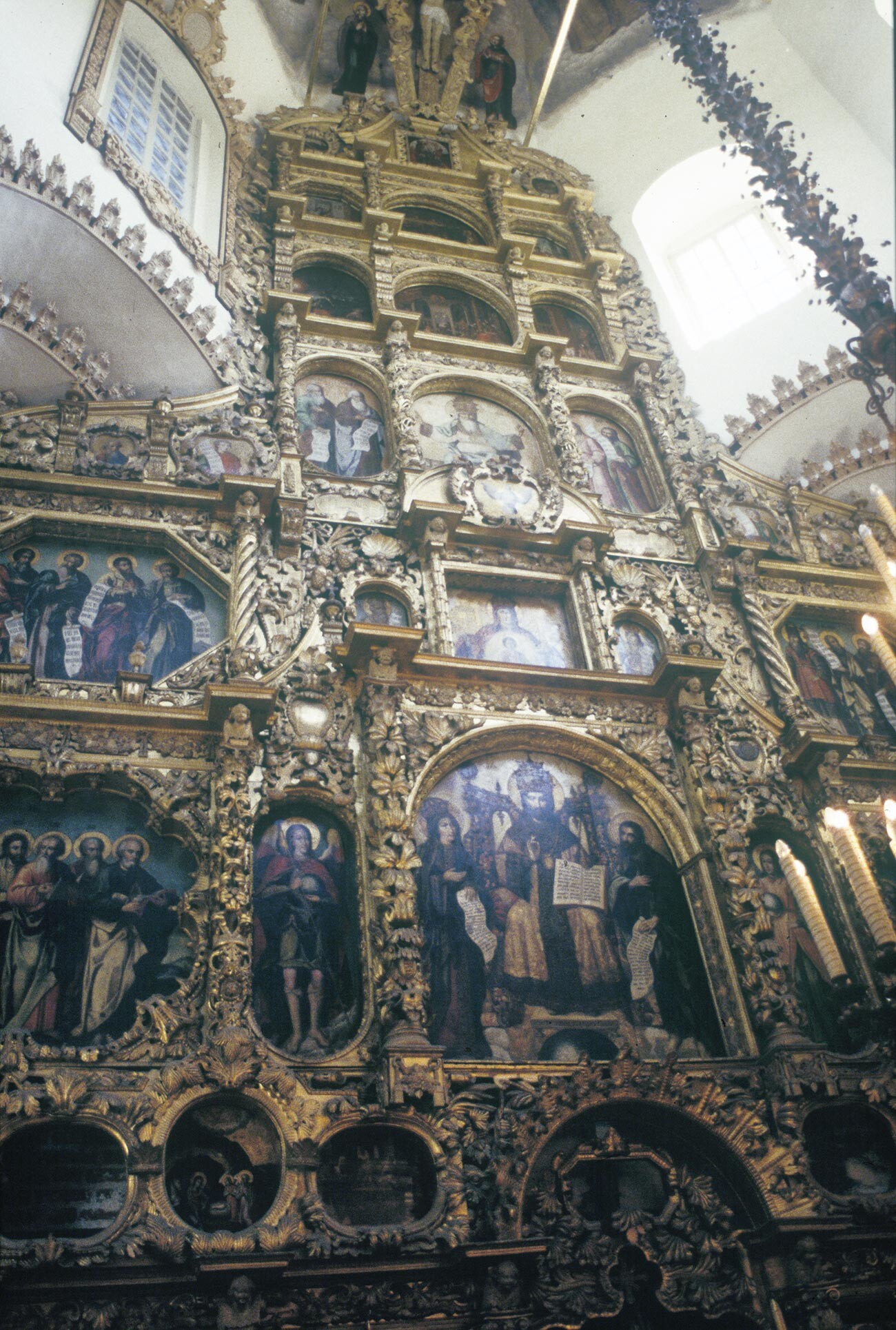 Church of the Intercession at Fili. Icon screen. July 2, 1995

Because of its more frequent use, the winter church had the main altar, dedicated to the Intercession. The altar of the larger elevated church was dedicated to the Miraculous Image of the Savior, the icon to which Lev Naryshkin is said to have prayed when his life was threatened in 1682.

On the exterior, each stairway leads to massive iron doors that also play a role in the decoration. The festive, ceremonial function of this design of steps, in two landings with a right-angle turn, is enhanced by a display of limestone carving typical of the Naryshkin style.

The raised terrace gallery reinforces the plasticity of the projecting lobes, each of which has its own gilded cupola. The tower, composed of brightly painted brick walls enhanced with carved limestone, is crowned with a gilded cupola above the belfry. 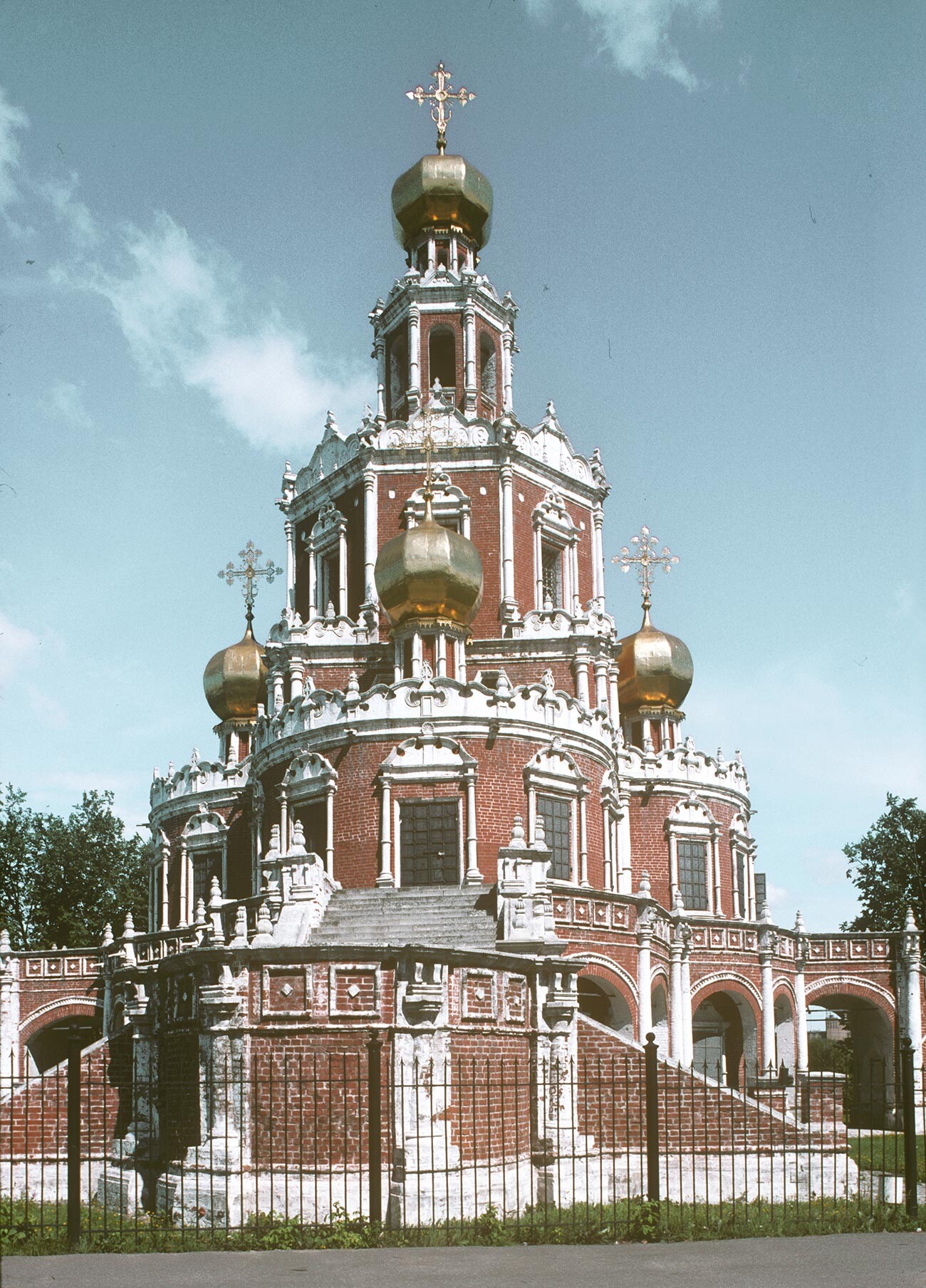 The exterior ornament consists of cornice crests (known as ‘coxcombs’), recessed panels and attached columns unornamented shafts. The decoration of the church demanded great expense, but resources were at hand: Tsar Peter personally gave 400 gold pieces for its completion.

Inside the Naryshkin estate church

The distinctive quality of the church at Fili is its impeccable handling of proportion and structural development, reinforced by the application of decorative detail. Despite the stylistic distance that separates the Fili church from contemporary European architecture, its unknown architect possessed a firm sense of an ordered tectonic system that related all parts to a harmonious whole. 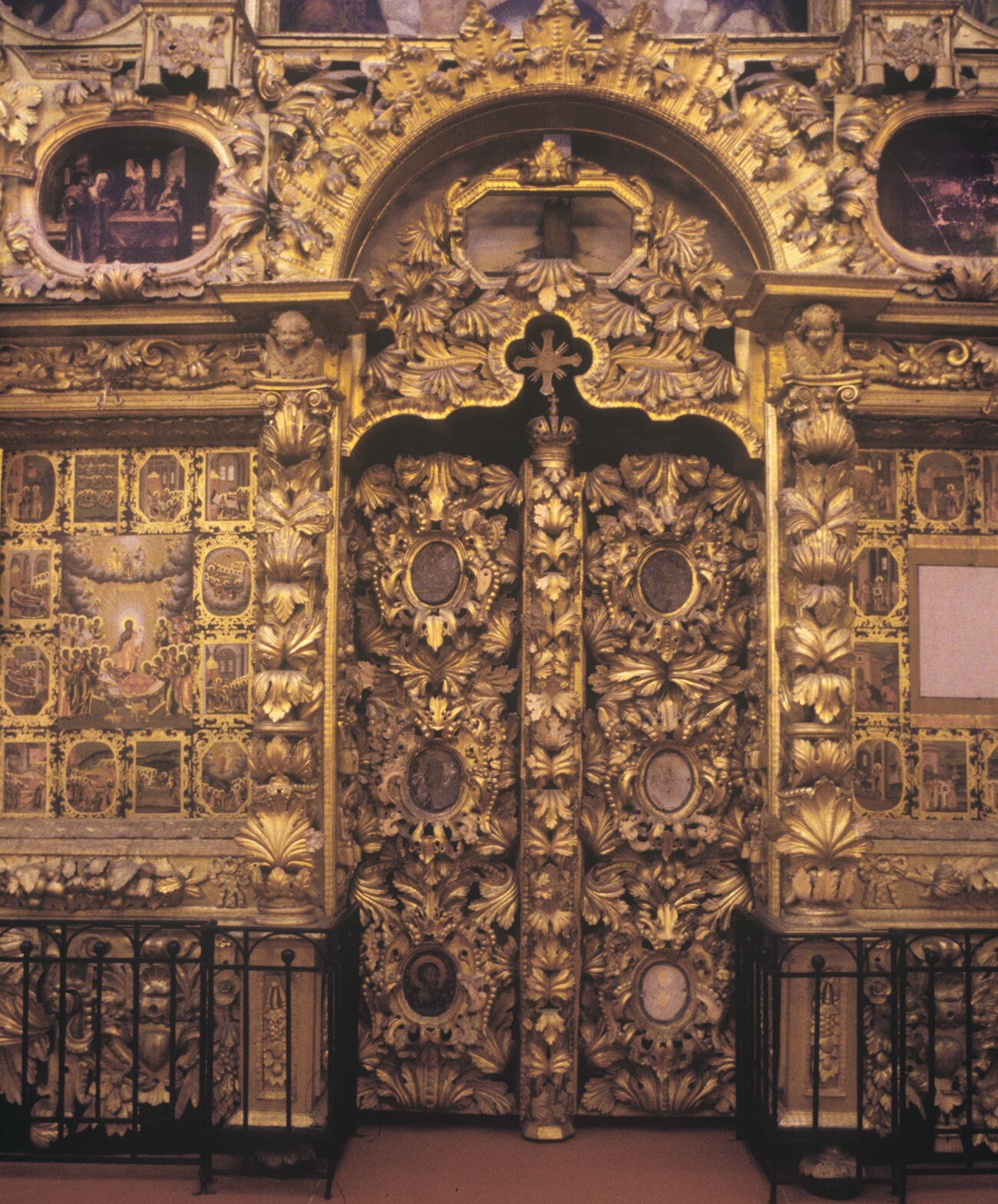 The resulting compact form did not allow for a large sanctuary, which, in any event, was unnecessary in an estate church. The interior space - essentially a cylinder - was further constrained by thick walls, which not only supported the weight of the high structure, but also contained the steps to the octagonal tier containing the bells. The upper part of the cylinder was reinforced with iron tie rods linked at the base of the main cupola.

Despite its small size, the interior was sumptuously outfitted with painted walls, fabrics and gilded carved woodwork. To observe the service, the Naryshkins had a loge projecting from the upper tier, which was reached by the narrow stairway within the brick walls. 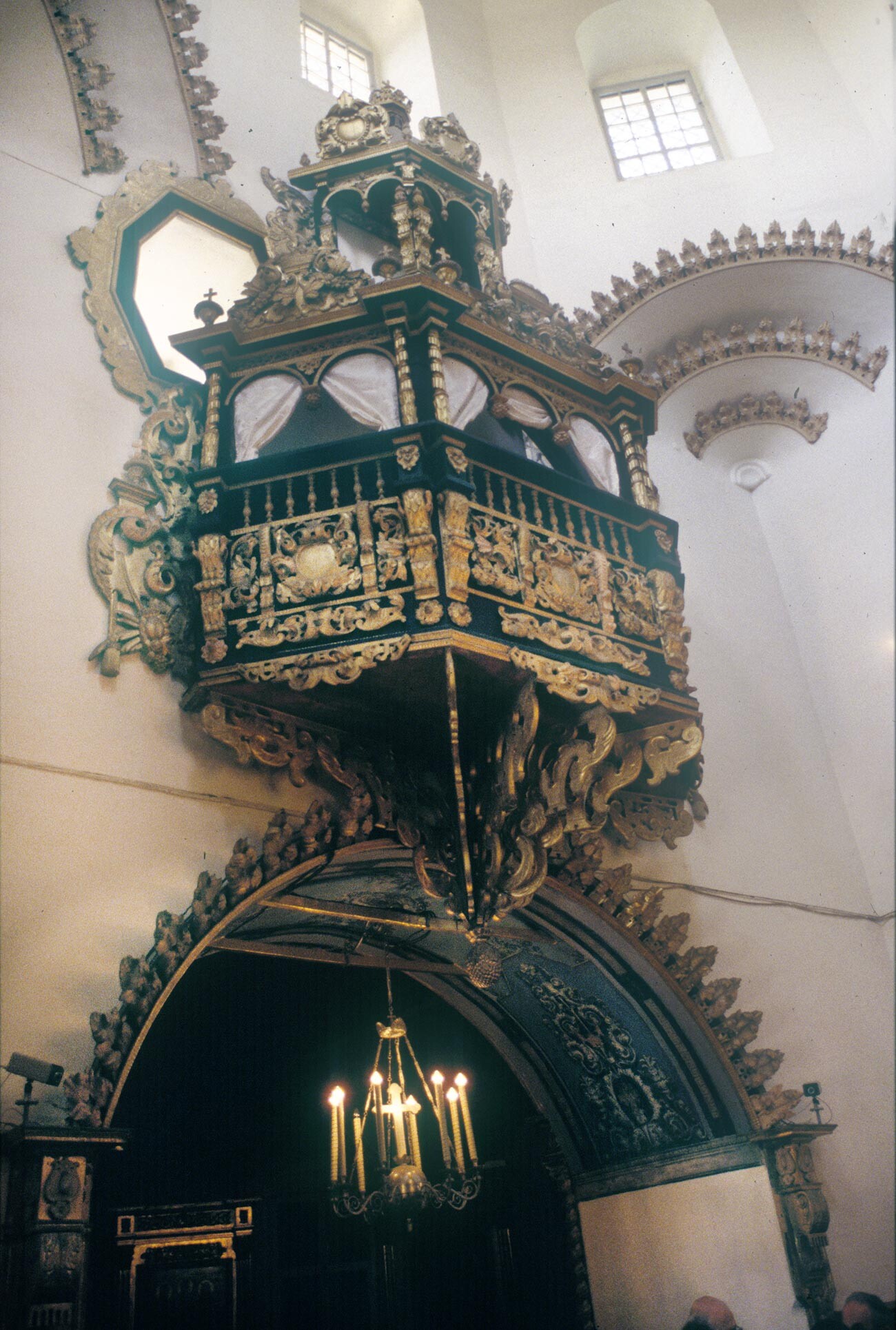 Church of the Intercession at Fili. West wall, with loge above main entryway. July 2, 1995

With the onset of a vastly more destructive war in the summer of 1941, the Intercession Church was closed and much of its upper structure dismantled to prevent it being used as an orientation point by German bombers. Restoration of the masterpiece extended with interruptions for three decades, from the mid-1950s. Functioning as a museum, the church was reconsecrated in the 1990s with services held in the lower “winter” space. 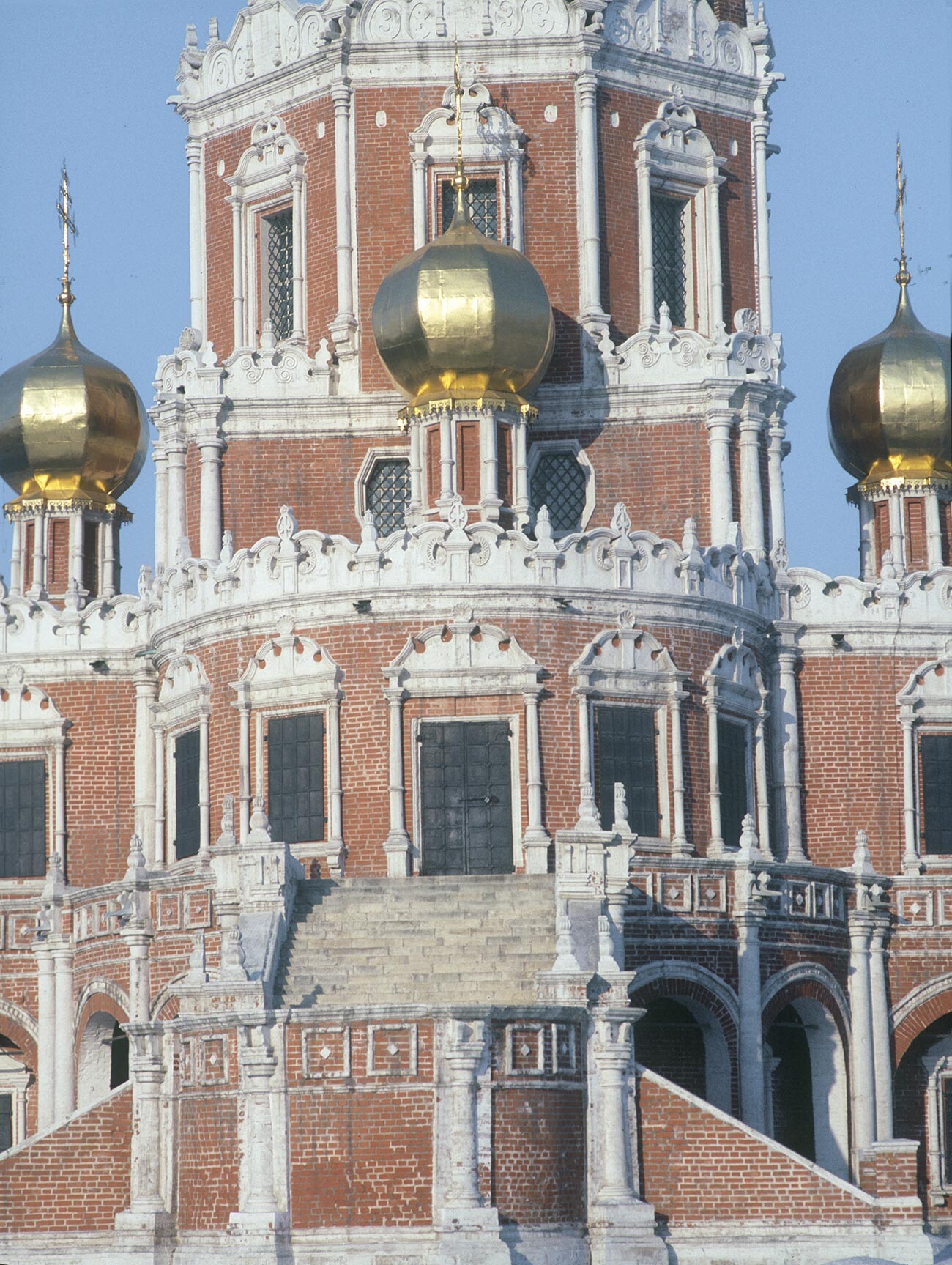 Church of the Intercession at Fili. South view with stairway. February 1, 1984

The festive, joyous, even palatial quality of the Naryshkin church at Fili created in essence a merging of exterior and interior. The motifs of the carved icon screen were echoed on the exterior facades, where they served to frame the structure as an expression of wealth and innovative taste.