Why Yakuts celebrate the New Year in the middle of summer 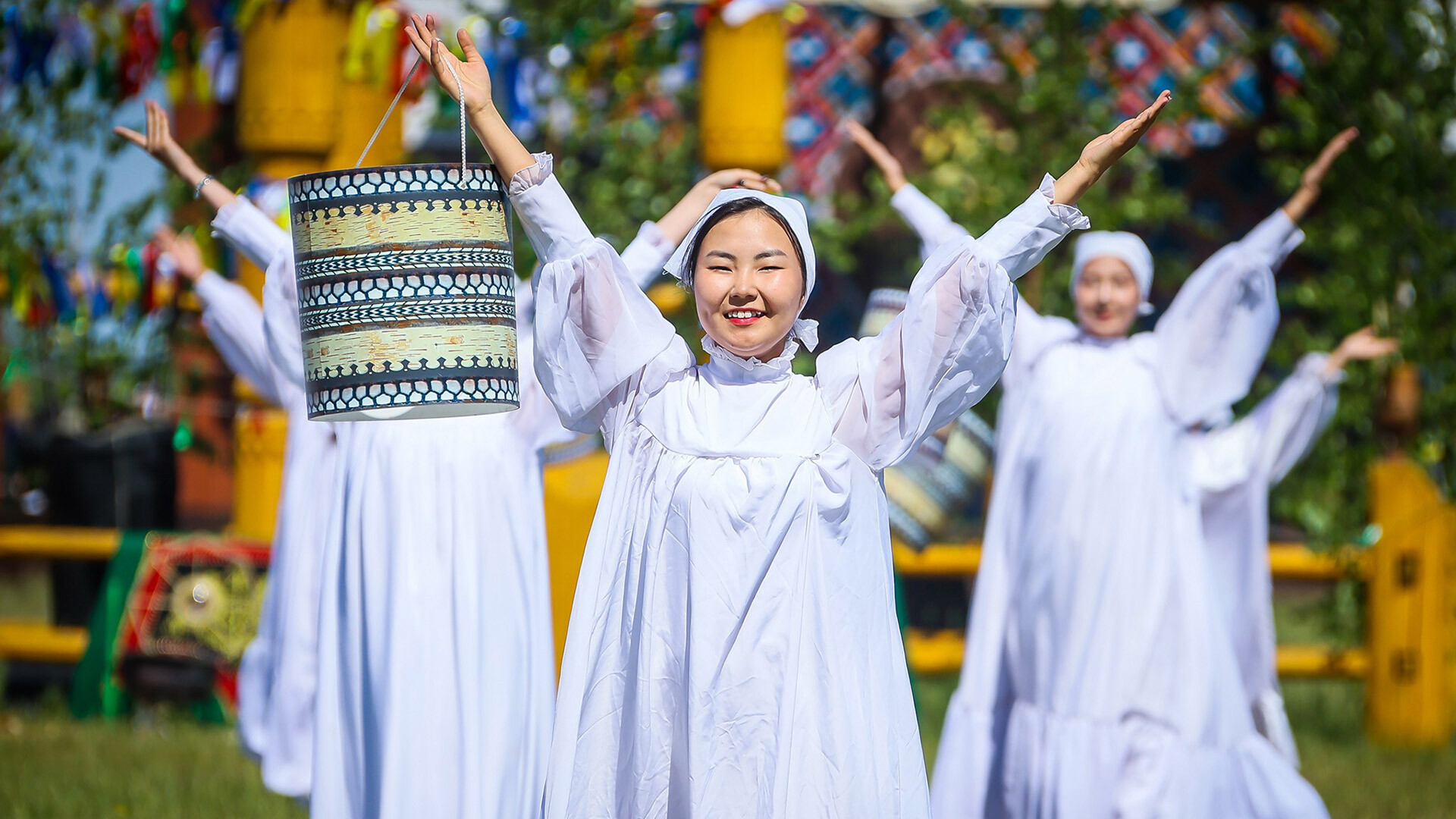 Andrei Sorokin
Many Yakuts still retain their pagan faith and, every year, gather for their most important holiday - Yhyakh. It is an unforgettable event, including a ritual greeting of the sun, drinking kumis together and singing and dancing in a grandiose khorovod, a traditional round dance.

“Uruy-aykhal! Uruy-tuskul!” joyfully cries a crowd of many thousand people dressed in Yakutian national costume and, in seconds, they start revolving in a gigantic khorovod known as the ‘Ohuokhai’. In the Yakutian language, the exclamations are wishes for prosperity and plenty in the coming year. And the Ohuokhai is a prayer dance to the Sun, symbolizing the movement of life. Slowly at first, then faster and faster - the feet of the dancers appear to be about to lift off the ground and the soul to fly skywards.

A gathering for those who have got through the winter 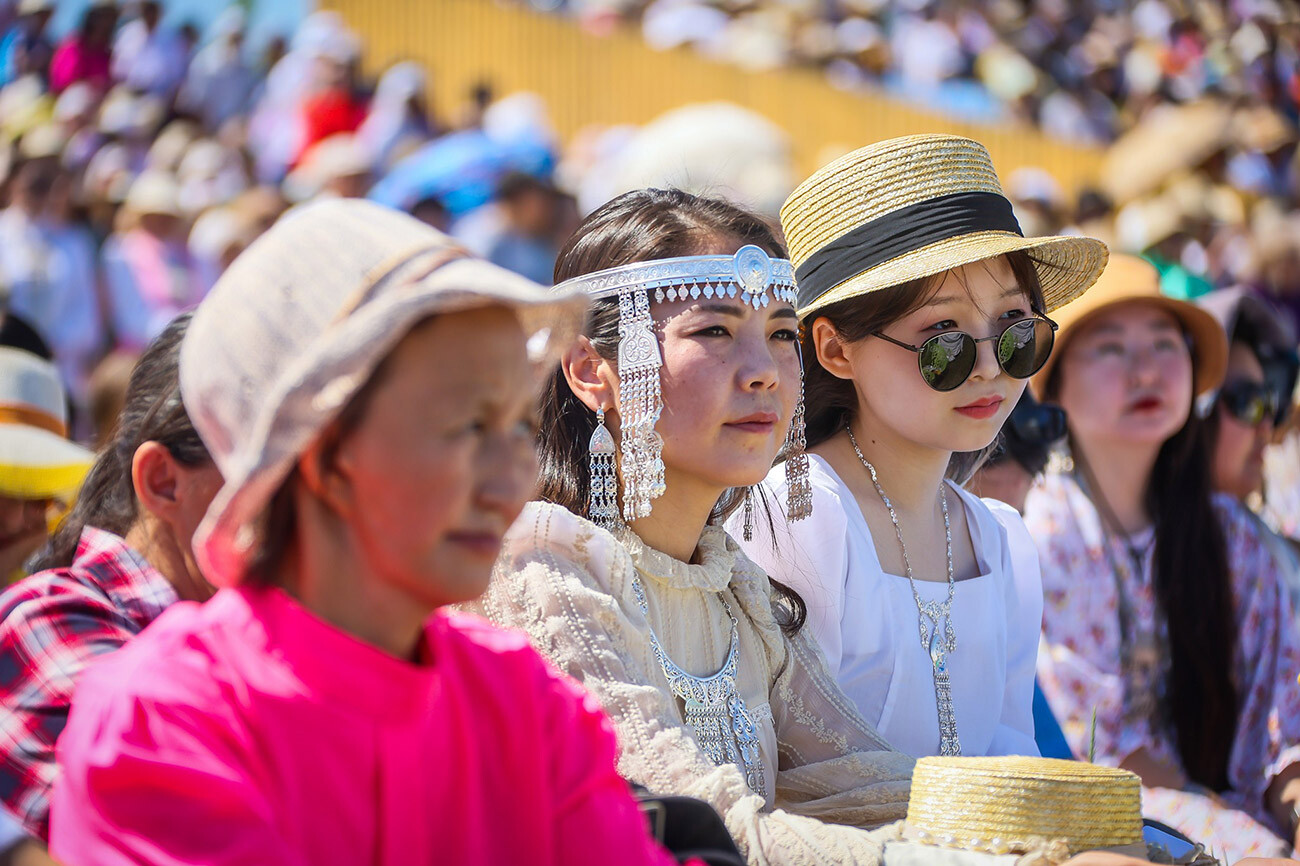 Yakutsk is a very modern and thriving city, despite being a long way from Moscow (it takes over six hours to fly there). In no way can it be described as provincial. Major diamond-mining companies have offices there (and it’s rare for a girl not to have two or three beautiful diamond earrings) and the city boasts the first IT-park in the Far East (there are a lot of developers of games and apps among the Yakuts), as well as the Arctic Innovation Center, where researchers study the permafrost. Young people are into Korean pop culture, drive right-hand-drive Japanese cars, listen to Yakutian rap, drink trendy blue iced matcha and eat ramen in cozy cafes. 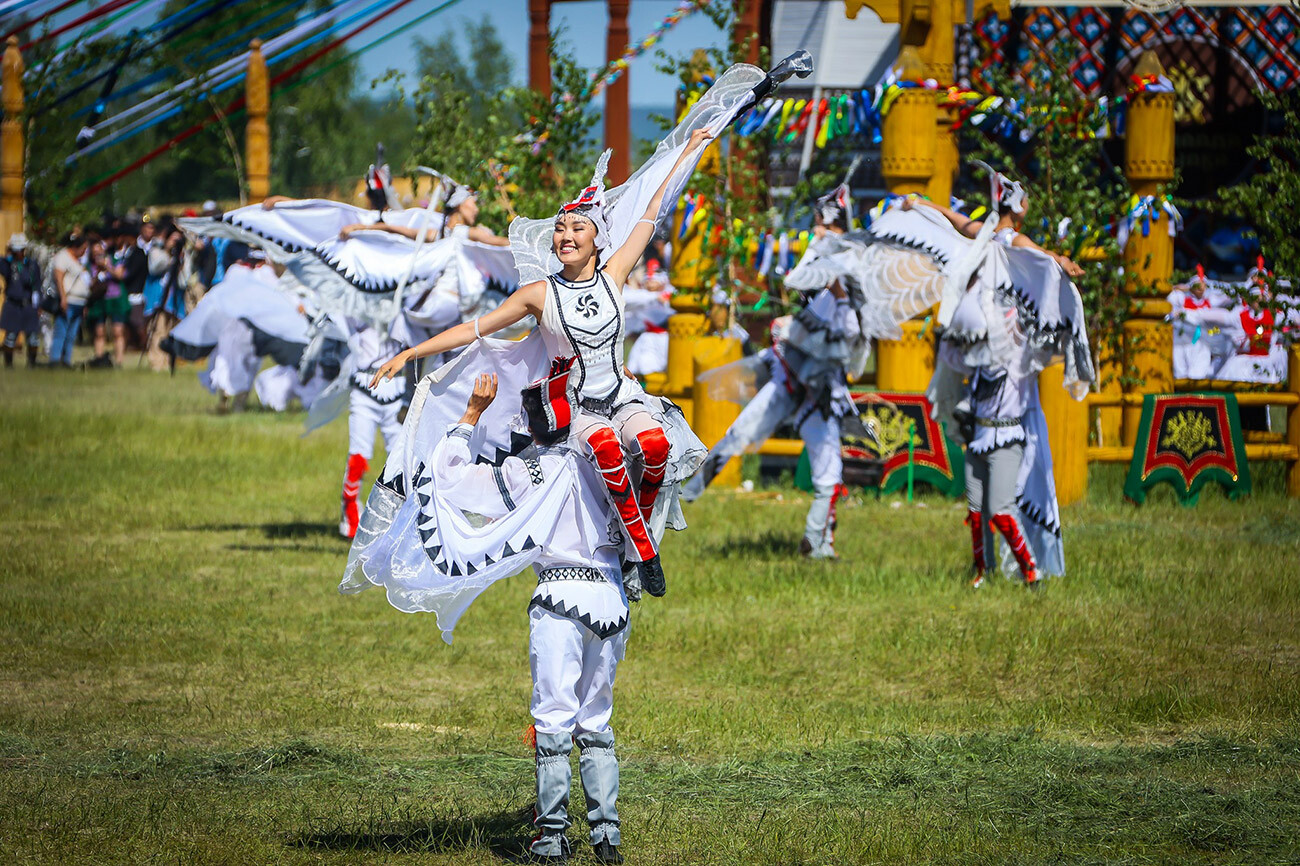 But, when the Yakutian New Year comes along, everything changes beyond recognition. Practically all Yakuts remember that they are practicing pagans, swap their jeans for their national costumes and head for the festival.

For centuries, Yakuts have gathered on this day in a set location to see their relatives after a long and harsh winter. Yakutia is the coldest region in Russia; during winter, the temperature is routinely minus 50°C and people have to work hard to survive. Only with the onset of summer can they relax a bit and enjoy life for a while. 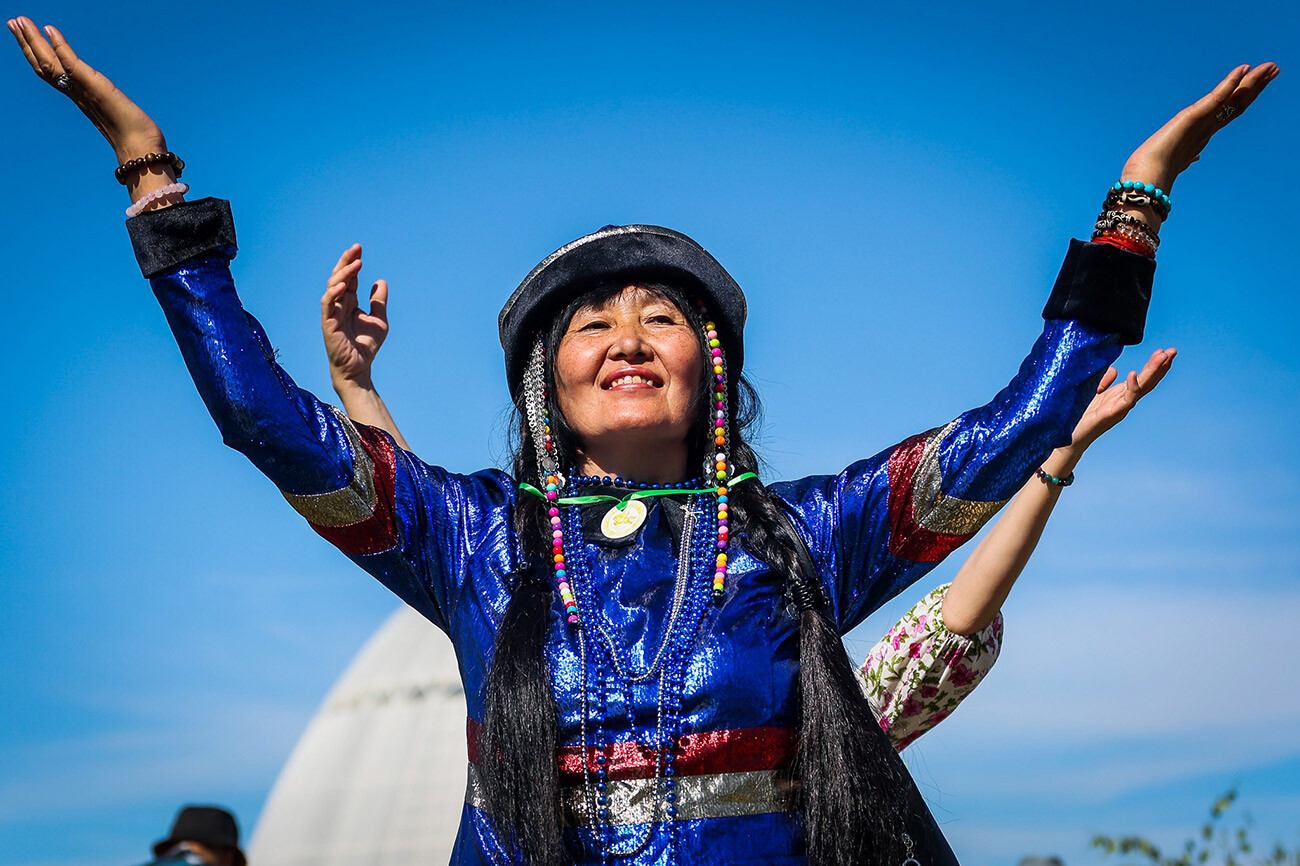 The word ‘yhyakh’ (the Russian pronunciation is “ii-sekh”) can be translated as “abundance”. The holiday is celebrated every year in every district (ulus) of Yakutia on the day of the summer solstice. The tradition has never been interrupted, except that, in Soviet times, the celebrations were much more modest. Some people manage to attend the festivities in several districts, thanks to the fact that the celebrations are held a couple of days apart. 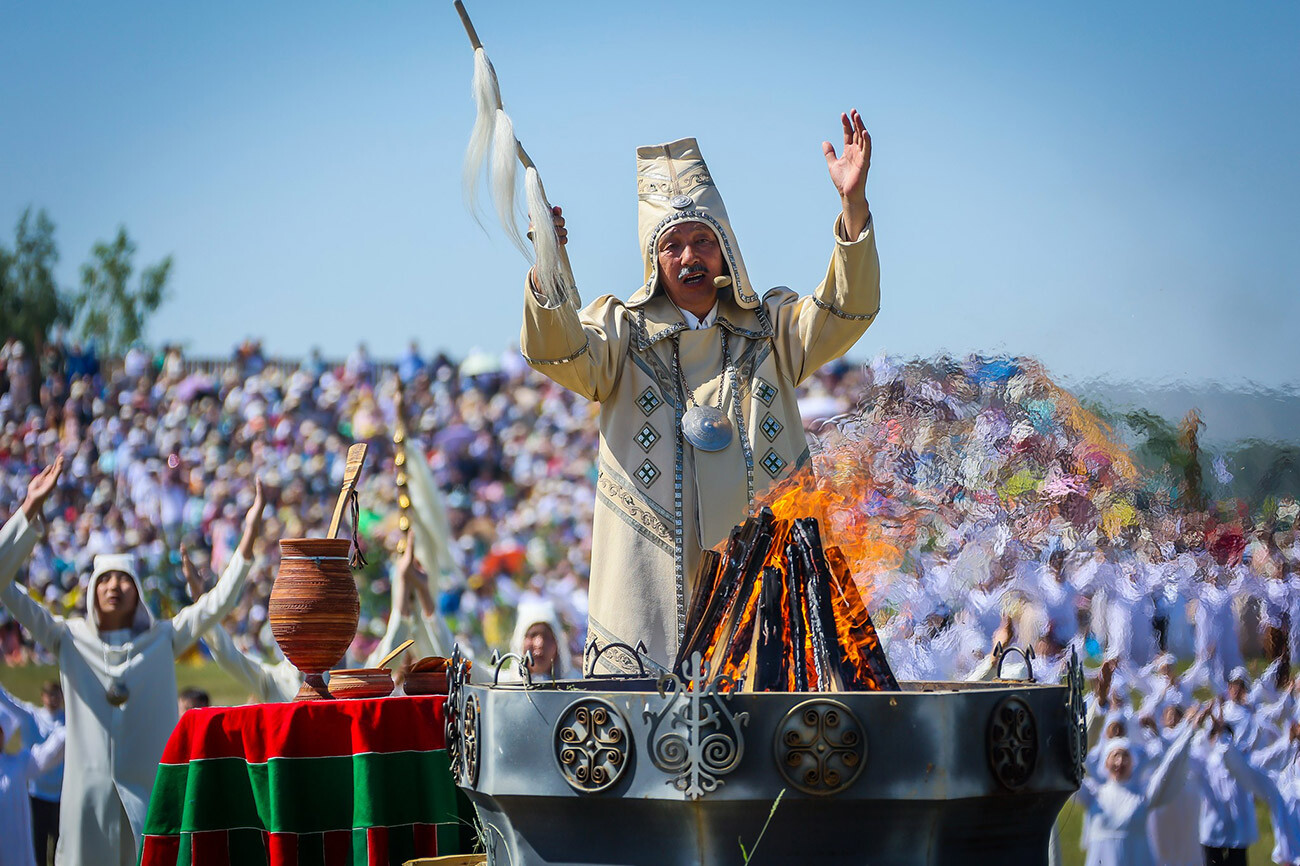 The festival in Yakutsk is the most popular and most widely attended. It usually takes place on the first weekend after June 21 (in 2022: June 25-26). More than 200,000 people descended on the capital of Yakutia! Think of that -  one in five citizens of the republic. It was held in the Us Khatyn (Three Birch Trees) ethnographic center, about 25 km north of Yakutsk. According to legend, it is where the ancestors of the Sakha people - as Yakuts call themselves - used to live. The whole ethnographic village, which is more like a city with its capacity to accommodate 250,000 people, was built specially for this annual two-day festival. For the rest of the year it is closed. 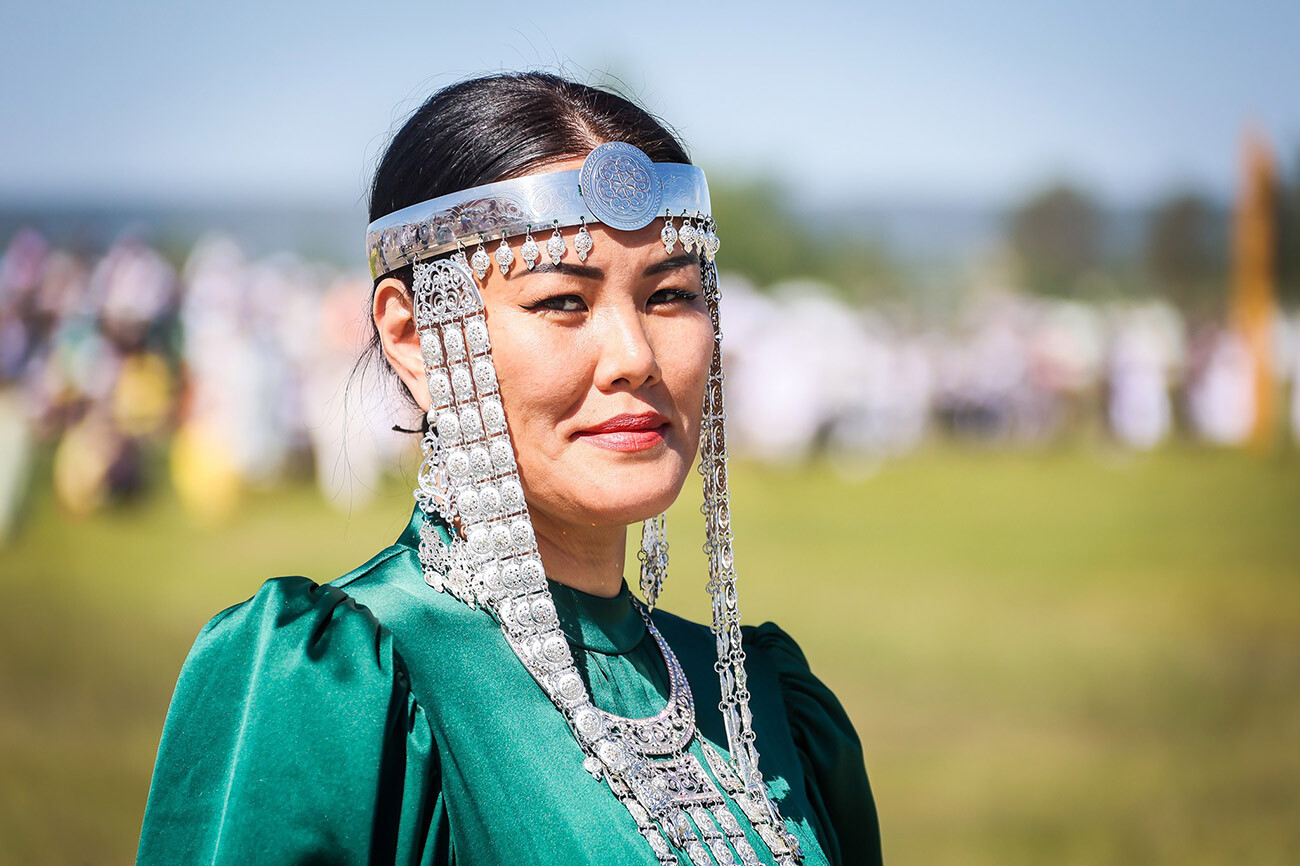 “We have had to wait three years for this celebration, because, during the pandemic, it was held online,” two female friends say delightedly and propose a drink of kumis, which is made from fermented mare’s milk. “Drinking fresh kumis together is for us a symbol of the end of winter. We rejoice that there is milk to drink and food to eat and that we have got through the winter and are gathering strength for the following year,” they say. 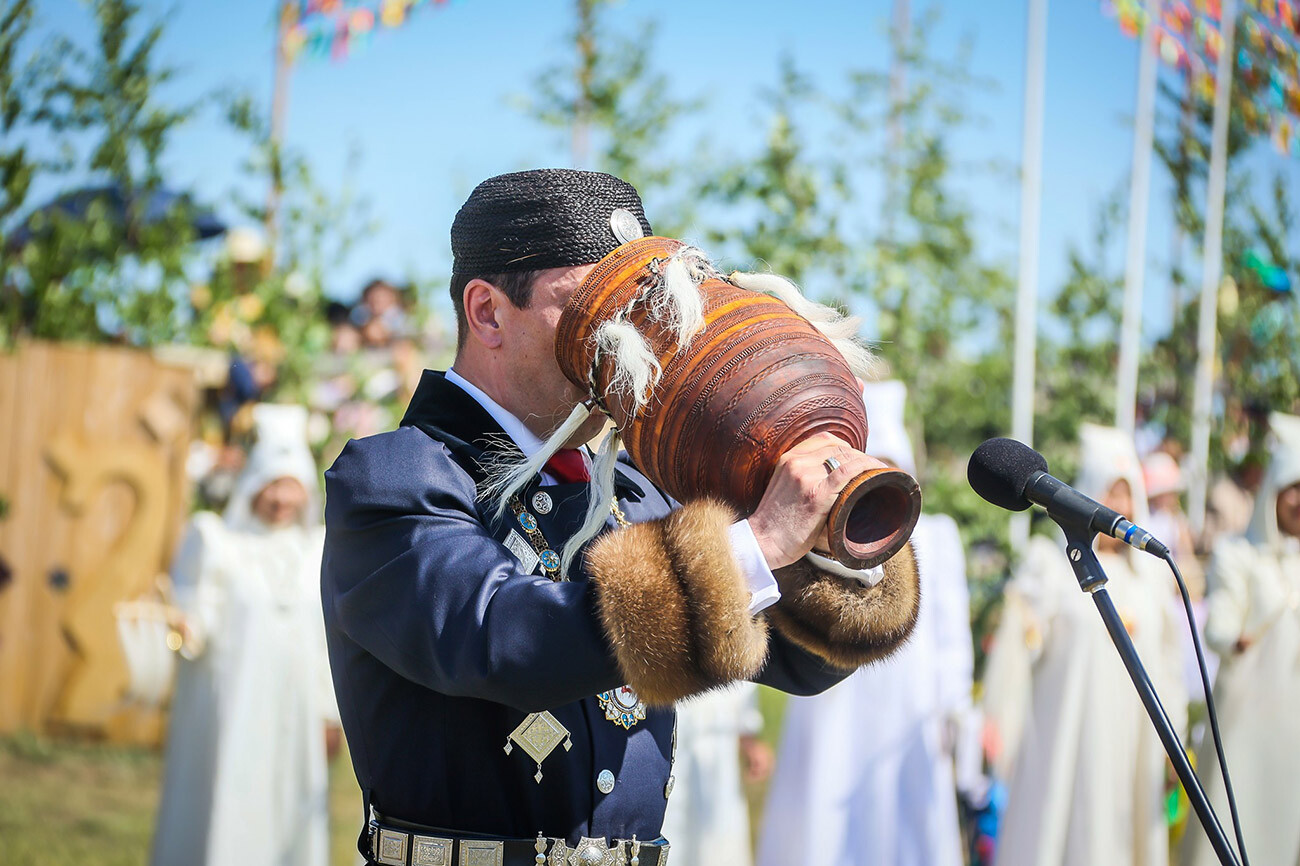 The outside temperature is over 30°C, but they have come not just in long, high-necked dresses and wearing headgear, but also with hefty adornments on their chest, back and arms (shorts and other sartorial liberties are strictly forbidden). “By tradition, jewelry is supposed to be made of silver, but we’re wearing our cupro-nickel jewelry - otherwise, you wouldn’t last long in this heat!” 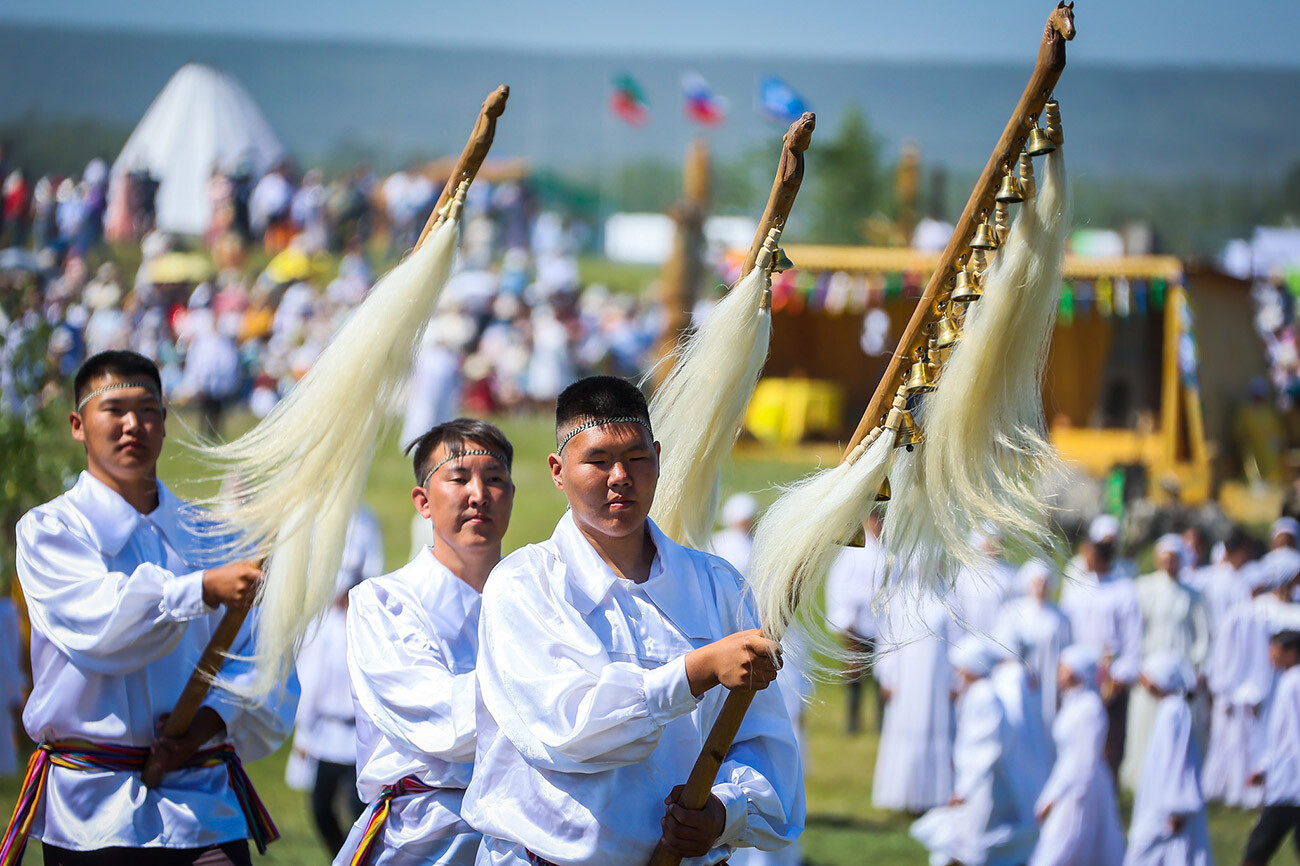 To get to the festivities, people first have to undergo a purification ritual: smoke emitters burn under the main gates and women wave horsehair tassels at new arrivals, wishing all blessings on them. Tassels are part of the Yakutian national dress. “They also serve a practical purpose,” say visitors. “It’s the way we chase away mosquitoes.” (They are highly active at this time of year.” 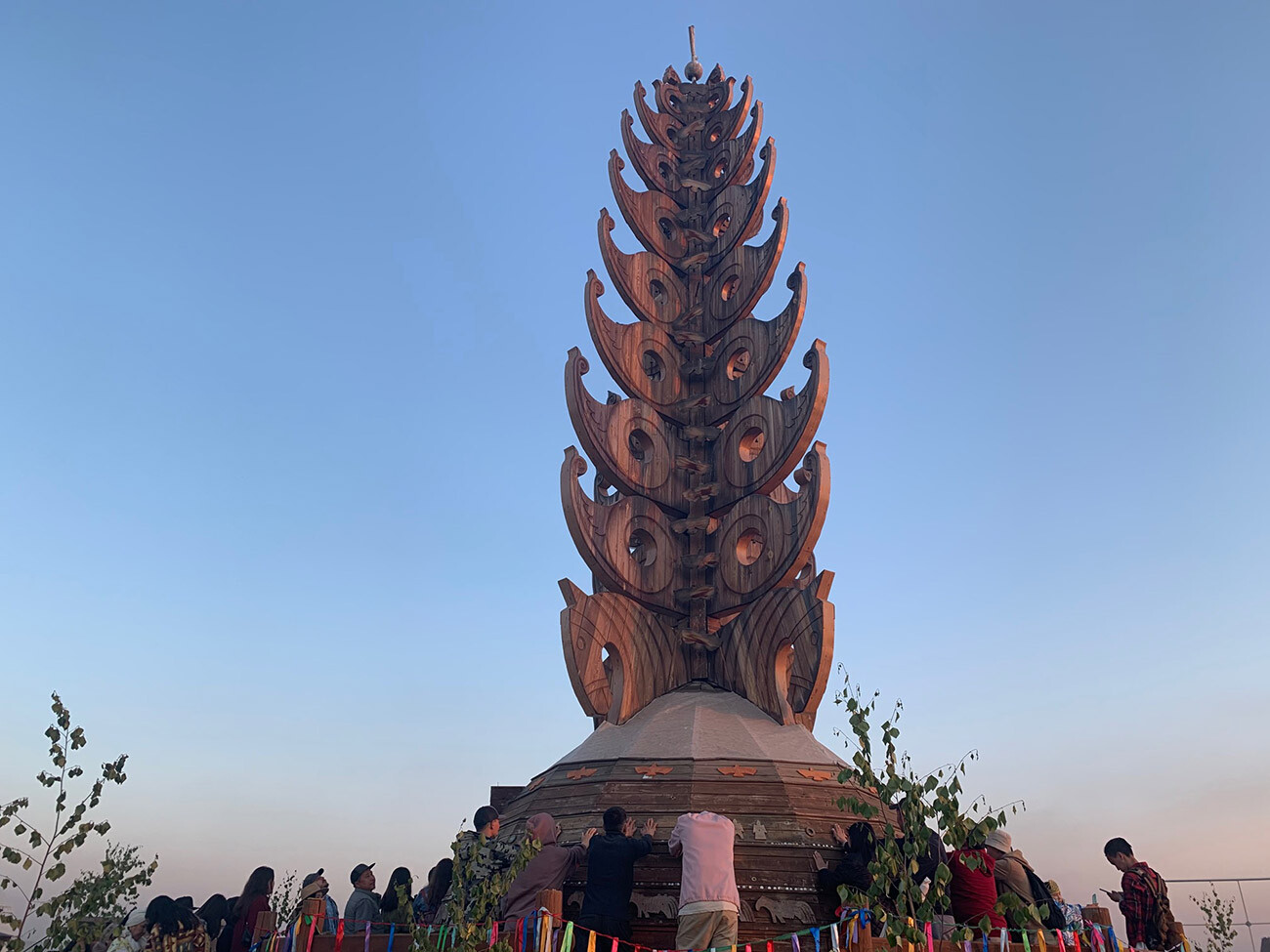 After that, you have to ask for blessings and prosperity from the “Great Giant Tree”. The tree is a symbol of the unity of the three dimensions of the cosmos and it can be seen at every Yhyakh celebration. 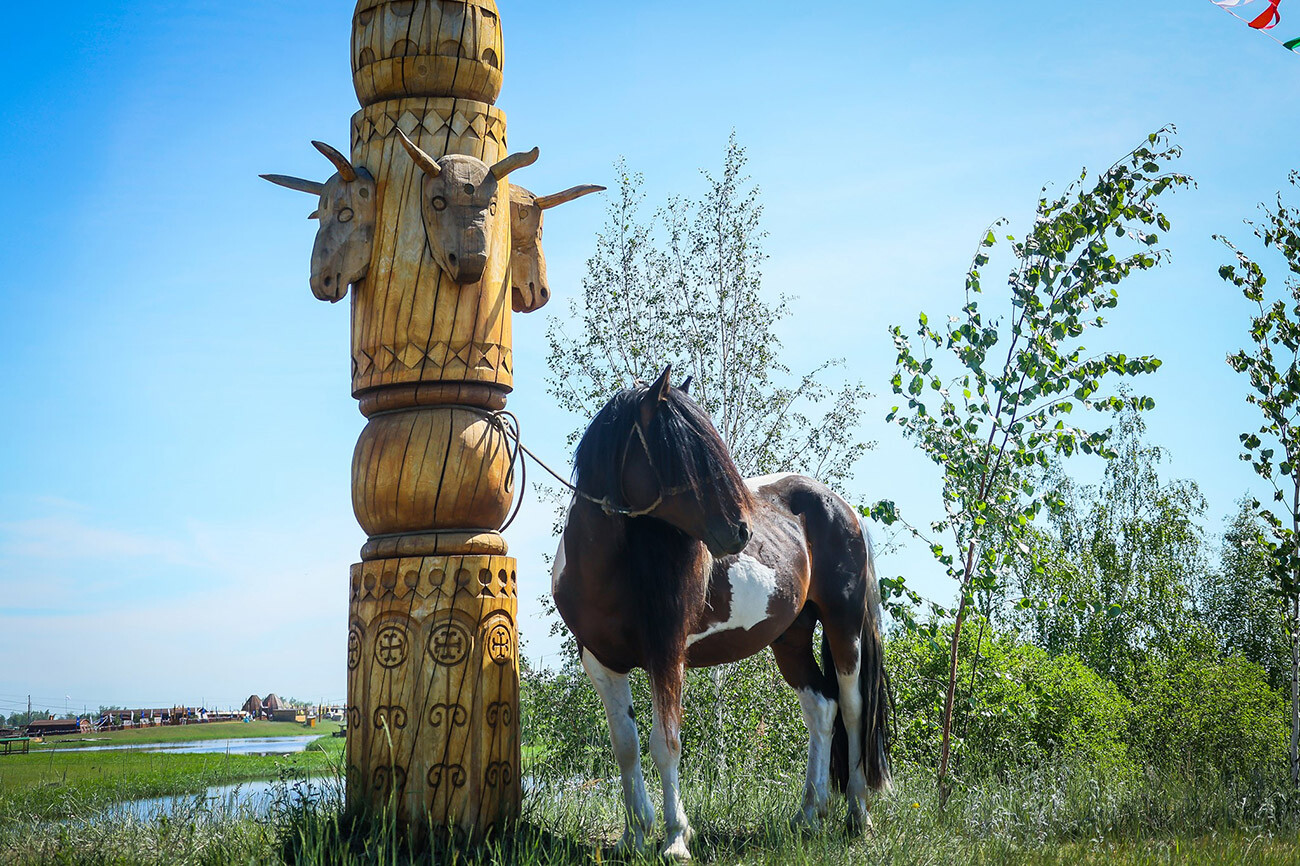 Then you follow a road, on either side of which 99 equine tethering posts have been set up. Horses are sacred animals for the Yakutians and that is why horse symbols are encountered at literally every step. A huge tethering post on raised ground awaits at the end of the road. As you approach, you have to bow, lean against it with the flat of your hands and make a wish. “You can wish for anything you want and on behalf of whomever you want and we believe that the wishes made here will come true,” says a girl waiting her turn. It has to be said that a particular energy, a sense of hope for the future, emanates from here. 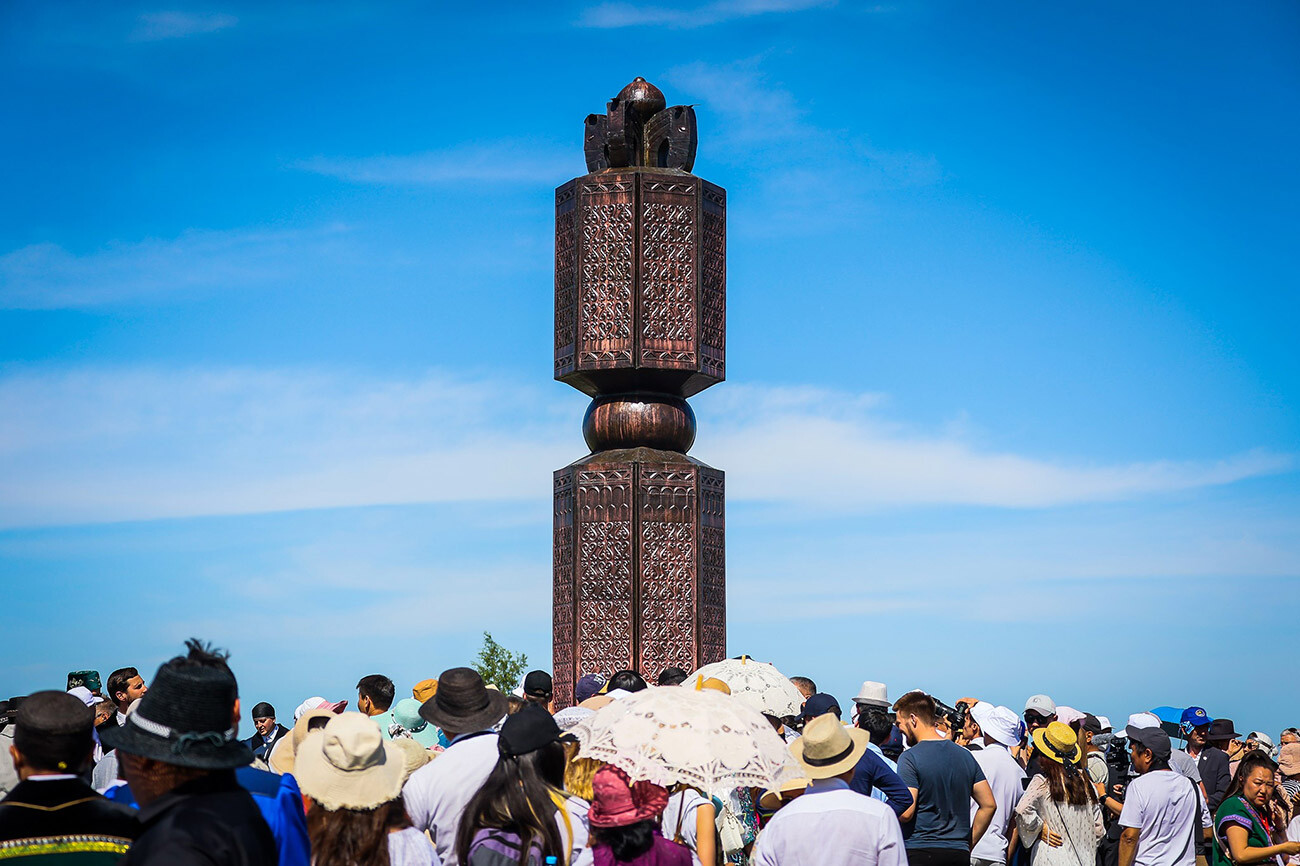 After that, visitors arrive at the main part of the complex, which consists of replicas of old-style Yakutian birch-bark houses resembling an enormous tent. In one place, films are being screened, in another, souvenirs are on sale and in yet another contests are being held. Other Yakutian ethnic groups have their own arenas: the Chukchi, Evenks and Yukaghirs. It’s a multi-ethic republic, after all! 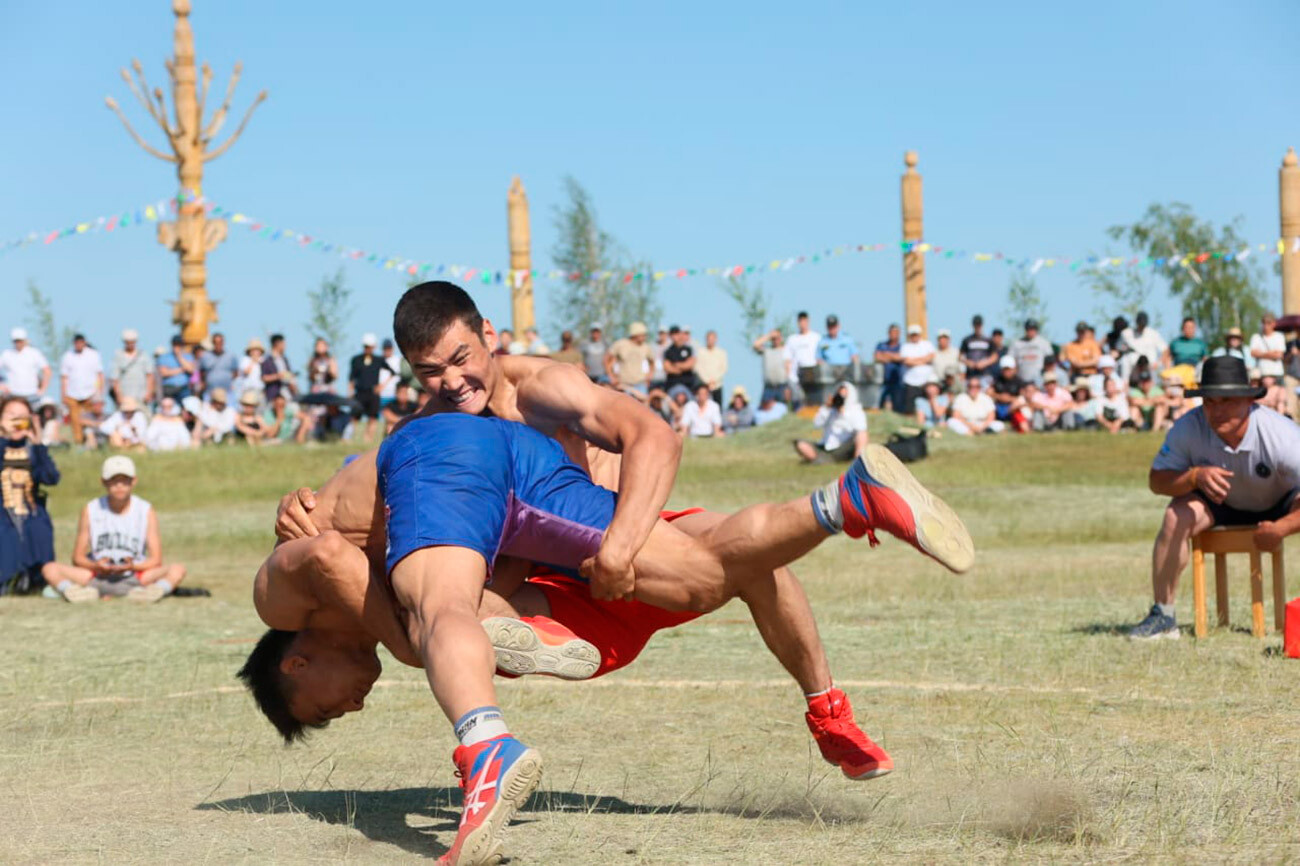 But many people come to Yhyakh purely for the sporting contests. Native types of sport are popular in Yakutia as nowhere else. The most well-known one is ‘mas-wrestling’ (stick pulling) and the finals of this international competition often brings together athletes from countries such as Russia, Hungary, Slovakia, Serbia and Argentina, as well as African and Commonwealth of Independent States countries. In another arena, thousands of people are watching the ‘Dygyn Games’ with rapt attention. The events here are highly unusual - for instance, there is one “chasing the girl”. “In the old days,” explains a spectator, “whoever caught up with the girl would marry her. But now, it’s just a question of putting in the fastest time.” It is virtually impossible to catch the girl these days, as the Yakut women’s running champion is selected for the role. 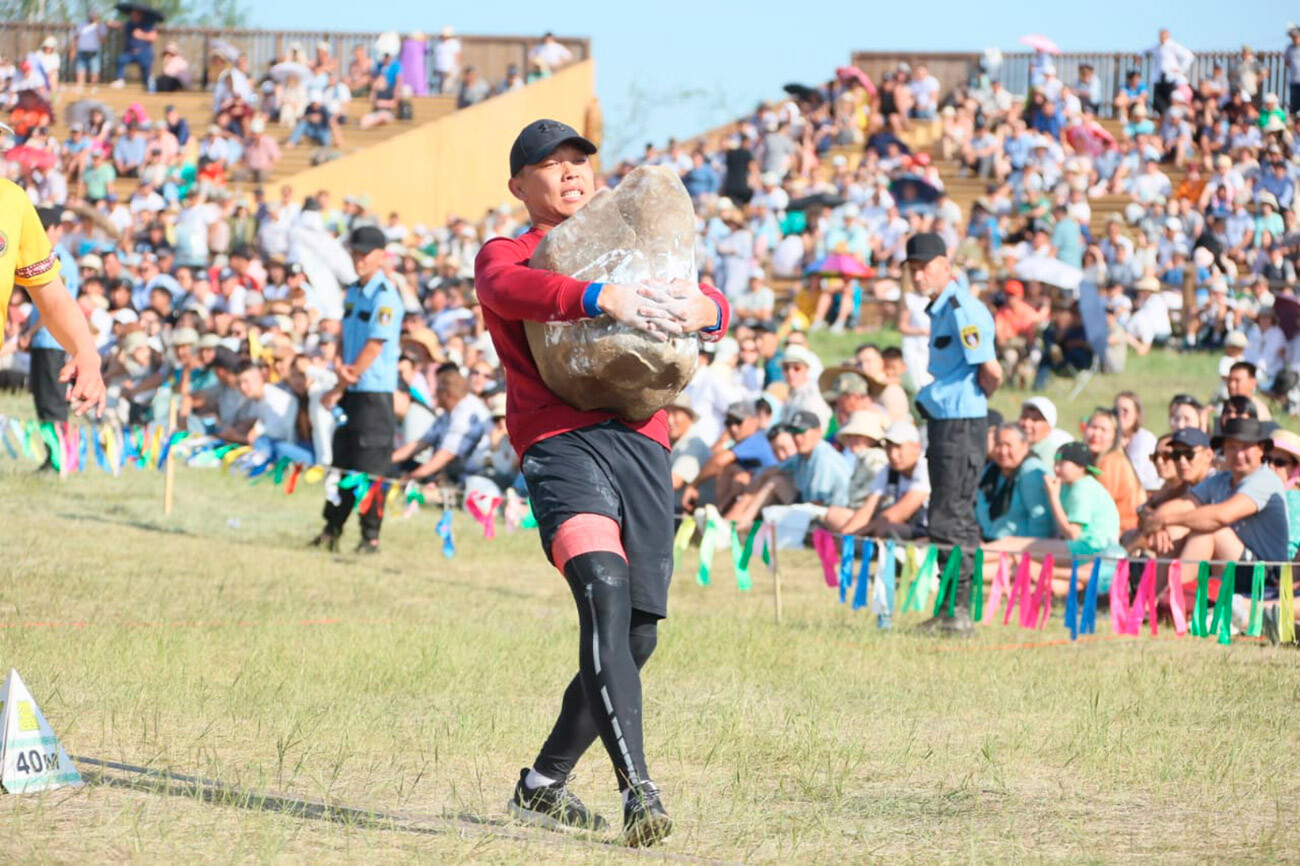 There is another interesting event - dragging a 115-kg stone over a distance. It seems improbable that anyone can even pick it up, as it’s super heavy, with sharp edges and slippery with sweat. But how the spectators cheer on their idols! With support like that, the competitors are ready to keep trying to the bitter end. 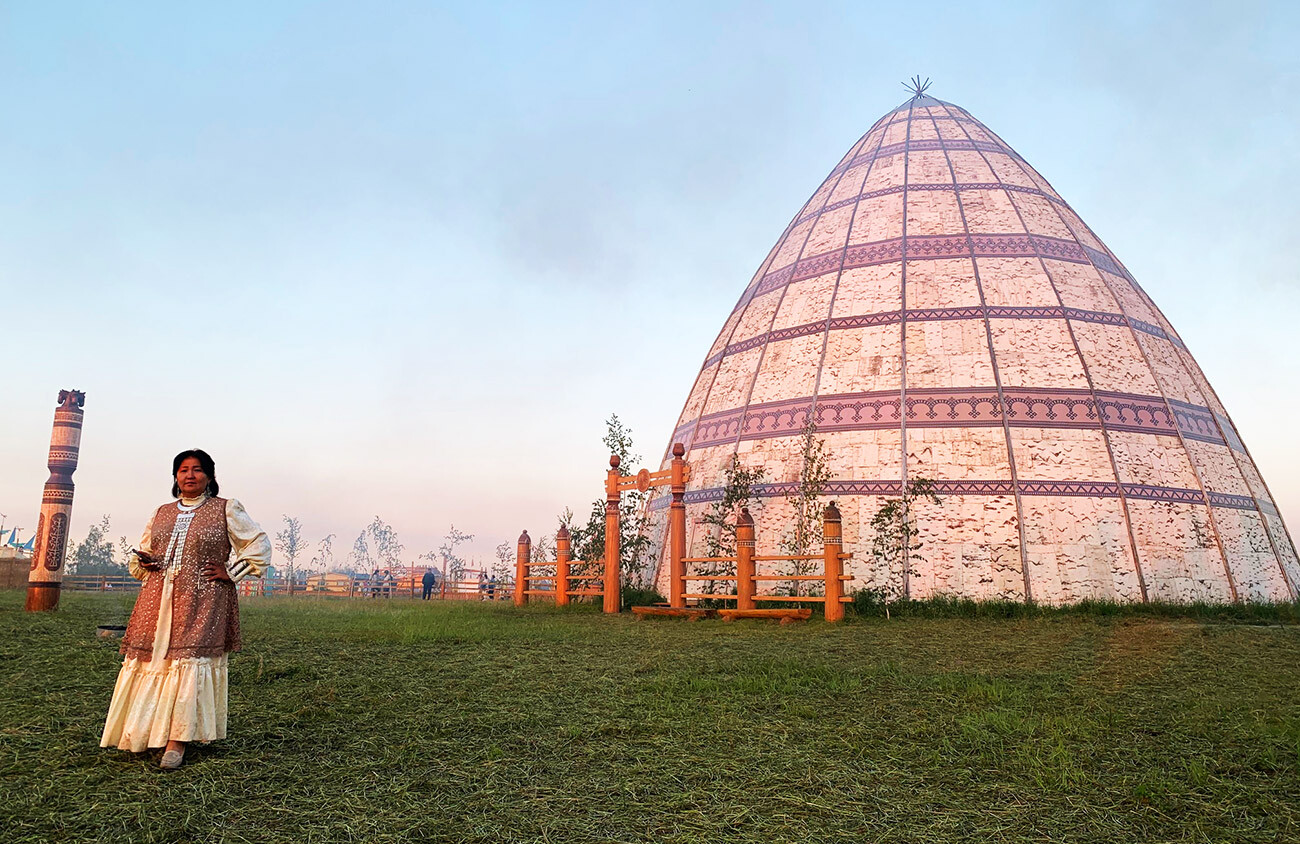 At around two O’clock in the morning, a voice comes through on the stadium’s public address system asking for all the equipment to be switched off and for people to head to the main ceremony.

The culmination of the festival is the greeting of the sun to celebrate the start of summer - and a New Year. 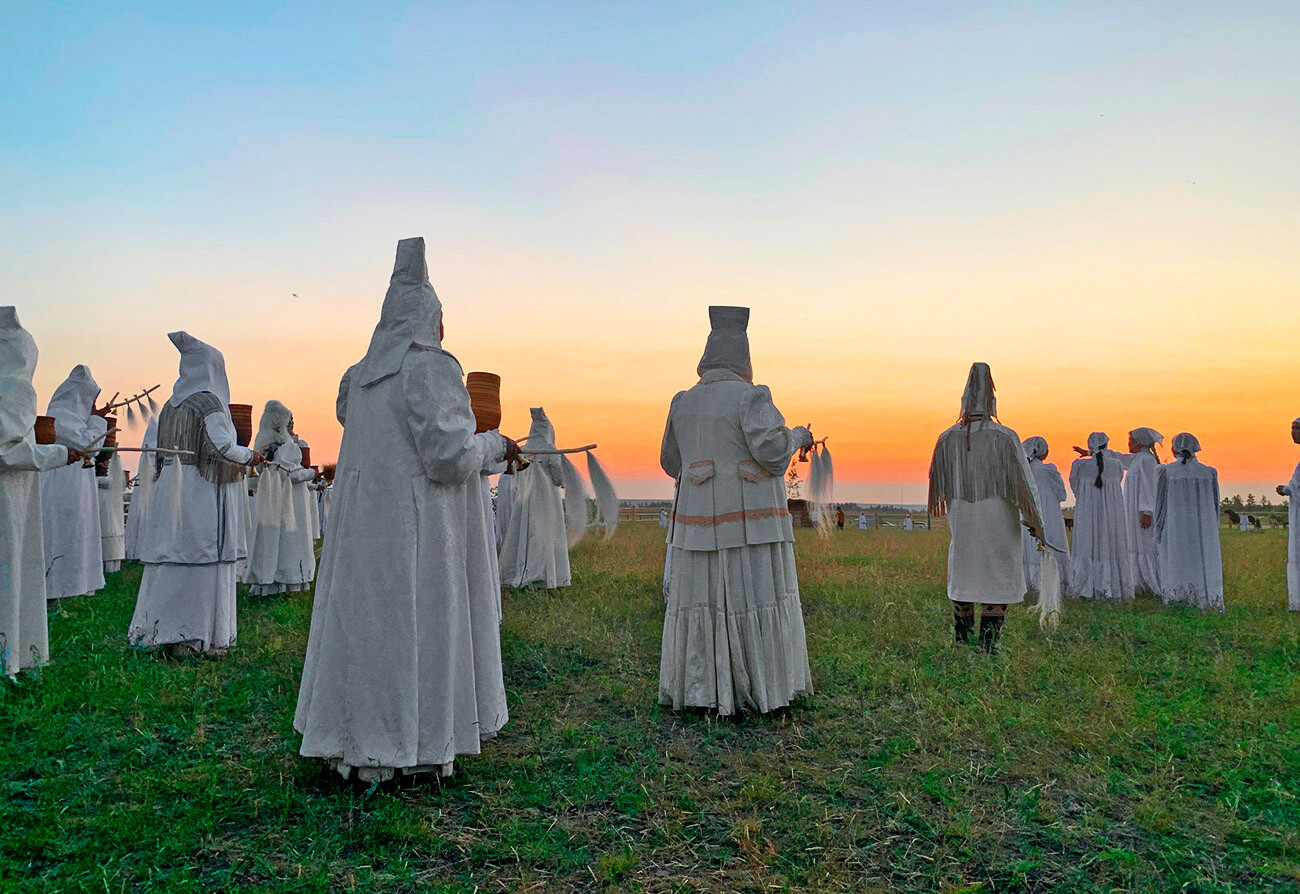 Just picture the scene: it’s before dawn and mist is creeping over a field where thousands of people have formed a circle. The summoner of good spirits, the algyschyt (not a shaman!) and members of his retinue, all dressed in white, wave their tassels with bells on more and more vigorously. The algyschyt bows in the four directions of the compass and lights a fire, making an offering of kumis, salamat (flour-based porridge with butter) and oladyi (griddle cakes) to the deities. 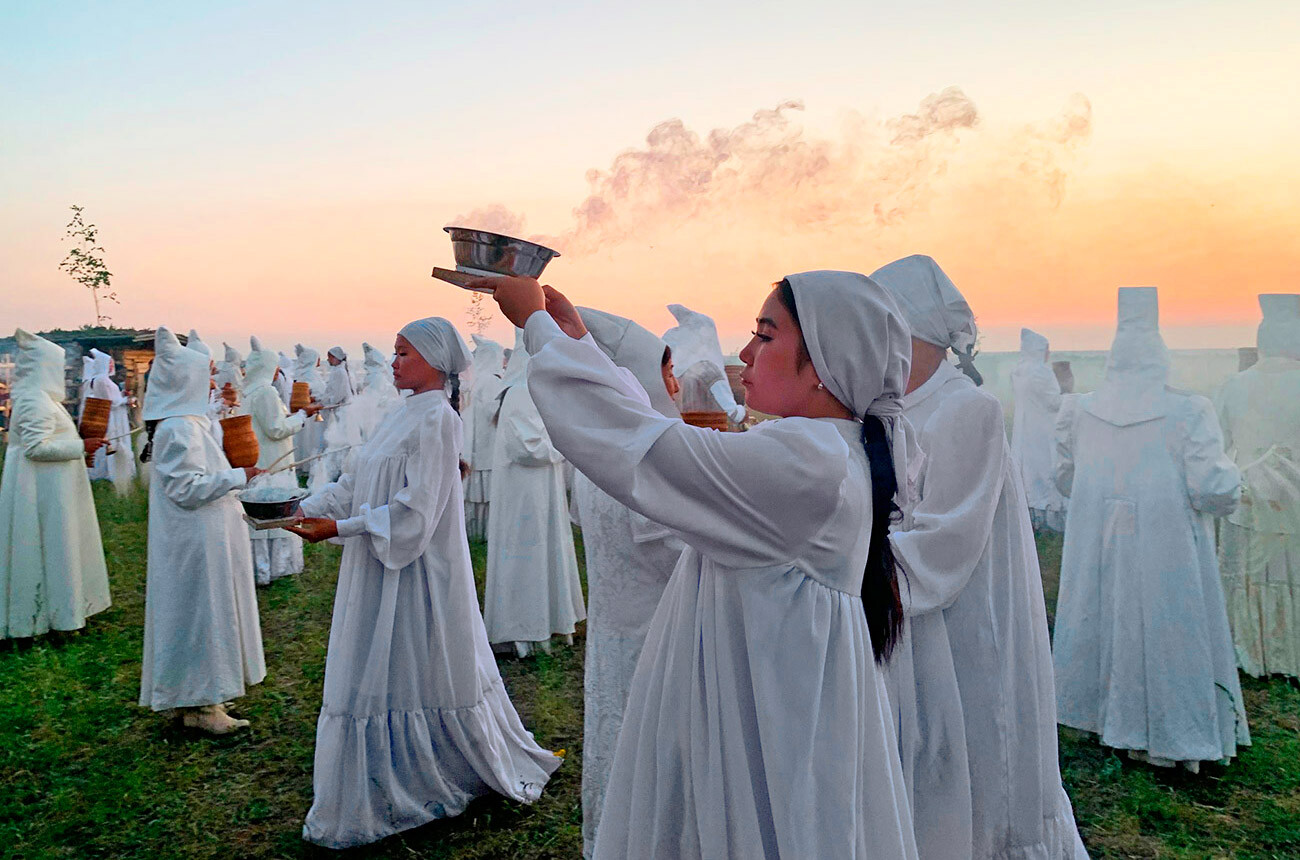 People dressed in white release smoke in the meadow, going round in a circle with their smoke-emitting bowls; they plant saplings and greet the dawn, pronouncing wishes for prosperity and plenty. And, finally, the sun, a neon-red strip, peeps from behind the horizon. 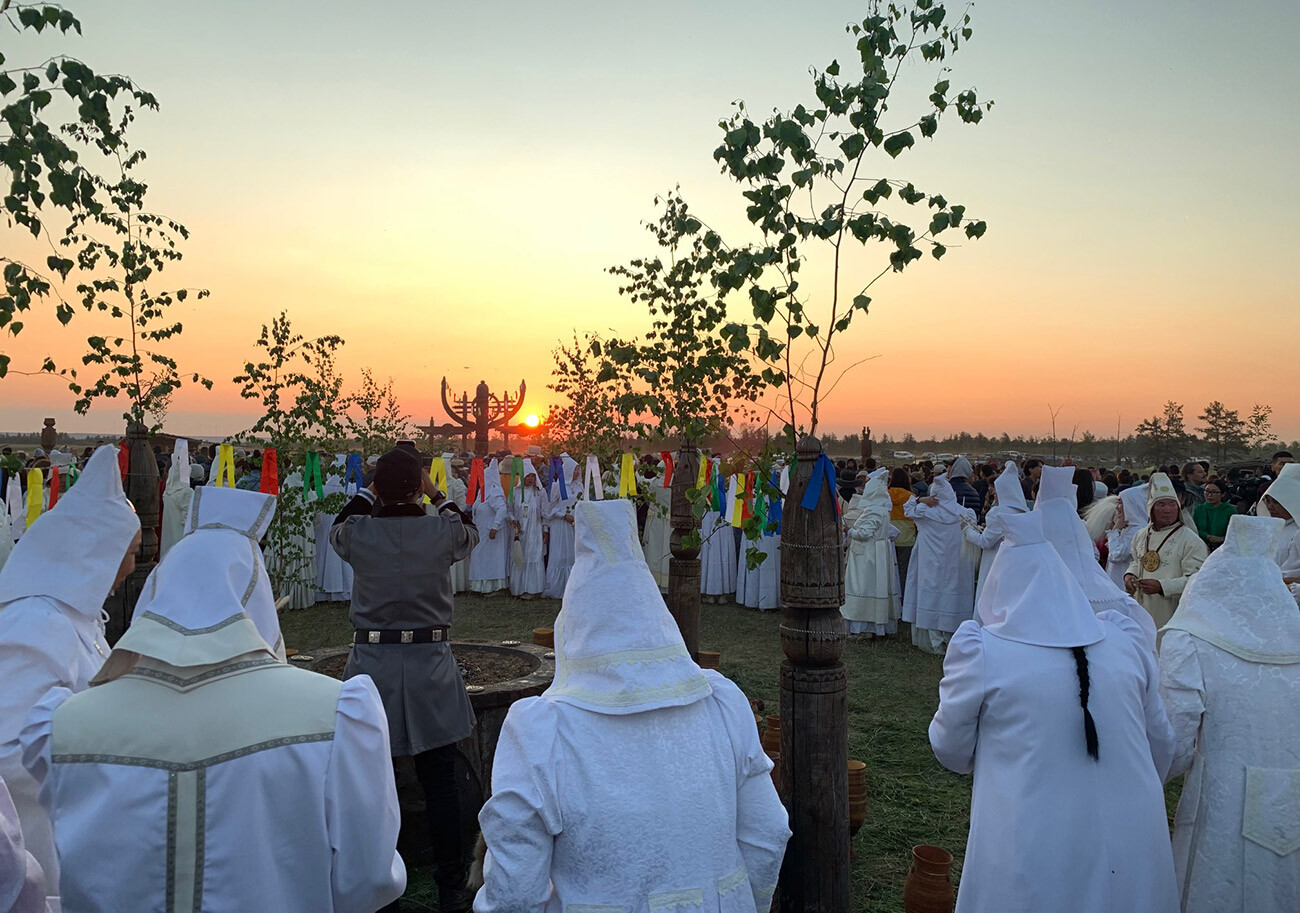