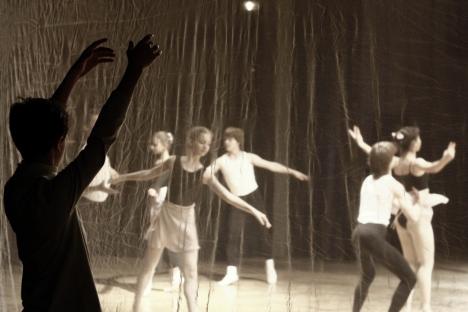 A footage from “My Dad Baryshnikov” movie made by Russian director Dmitry Povolotsky. Source: kinopoisk.ru

Dmitry Povolotsky’s recent film, “My Dad Baryshnikov,” tells the story of the 14-year-old ballet dancer Borya Fishkin, whose puberty coincides with the tumult of perestroika.  In hopes of being accepted in the cutthroat subculture of ballet, Borya creates a fanciful story that he is the son of Mikhail Baryshnikov, the Soviet dancer who defected to the United States in 1974 and charmed the world.

Director and writer Povolotsky, a graduate of Columbia University School of Arts (2008) and a New Yorker for two decades, broadly based the narrative on his own experience as a dance student in a chaotic Moscow just as the world his parents and teachers knew was began to fall apart.

“I was a restless child,” he said, “and very curious. I remember my childhood very well, it was a good childhood. Only now I’m beginning to understand, that I grew up in a country that doesn’t exist any more. That’s a very unique feeling.”

“My Dad Baryshnikov” opened in Russia in the late fall and has since been invited to international film festivals such as the Busan International Film Festival in Busan, Korea, and Film Festival Cottbus in Germany, as well as Russian Film Weeks in New York and Berlin. The simple, funny and touching story of Borya Fishkin earned the affection of viewers.

It also charmed the critics. Film trade publication Variety wrote that the film “is an endearing crowd pleaser with plenty of [festival] export potential; it could even work as a specialty theatrical item in the right hands.  The critic also said that calling the film “Goodbye Lenin” meets “Billy Elliott” doesn’t do the work justice. But the comparisons do let potential viewers in on the pleasures of this film.

Even after living in New York for two decades, Povolotsky is still attached to his old neighborhood in Moscow, where he maintains an apartment. He refers to himself as “a pal from Ochakovo-Matveevskoye, Moscow’s Southwest.” The district, located right by the city’s well-known artery, Kutuzovsky Prospect, and Victory Park, has been transformed.  Today it is one of Moscow’s coveted neighborhoods with skyscrapers and luxury condominiums. But some Soviet-era buildings and a forest still co-exist with the new elite.

“I like to film there. In ‘Baryshnikov,’ the huge round building which I remember since I was a kid, was shot in Ochakovo-Matveevskoye. I’ll definitely shoot something there for my next movie. My neighborhood is like a mascot to me,” Povolotsky said.

“In Moscow I was an ‘iron,’” he said. “I ‘ironed’ for foreigners, swapping Commander watches and other military accessories for used jeans and other Western clothes, and then sold those deficit items to Muscovites who were obsessed with foreign stuff. Things were going pretty well. If only I knew, that in two years everything would change, and what was considered a crime would be called a new, exciting word — business — and encouraged on all levels.”

If he had stayed, he said, he would either have become one of the notorious Russian oligarchs or be dead. But Povolotsky left. In 1989 his mother told him that he should go to America “to become a man,” the director recalled. Povolotsky wrote a letter to his aunt who had immigrated to New York in the mid-1970s and bought a plane ticket.

A solid student at the Bolshoi ballet school, he became a scholarship student at Julliard. But by the age of 20, Dmitry realized that he was not tall enough, nor talented enough to pursue a dancing career. When he became disappointed with dancing, Povolotsky worked as a choreographer. Then he found filmmaking.

“I always wanted to tell stories," he said. “Because I was a dancer, I had to be silent most of the time, but I observed a lot, and always wated to share all the weird, ugly, funny and sometimes phantasmagoric events I witnessed.”  In 2001, he bought a simple video camera and rolled on. Povolotsky attended film school at Columbia University's School of Arts, and his graduation work, a short film “Pal/Secam,” was pronounced best film in both the Film Division Award and Student Choice Award at Columbia, was officially selected for the Sundance Film Festival and received the BAFTA/LA Short Film Award at the Mill Valley film festival in 2008 It also received a Grand Prize at the major Russian film festival Kinotavr. These awards helped him to establish connections in the film world, and when his full-length screenplay for “My Dad Baryshnikov” was ready, he promptly found producers.

“I left New York to shoot in Moscow a couple of years ago and ended up living there for 18 months,” he said.  He returned to New York and fell in love with it all over again. “But I'm leaving again soon, to work on my next project,” he said.

Hafsteinn Gunnar Sigurdsson, who met Povolotsky while studing film directing at Columbia University, has nothing but praise for the Russian director.
"Dmitry is truly an original. He is an endless source of absolutely great, original and sometimes far out ideas," said Sigurdsson. "He has a great sense of humor that constantly surprises you. As a director, he has a very unique view of the world and I hope he will keep sharing it with us in his films in the future. "

This is certainly Povolotsky's plan. He makes a living directing films and commercials, and occasionally teaching choreography, but his focus is on film. One of his upcoming projects is a story about a Russian-American family, with a protagonist who could be Borya Fishkin 25 years after the events that took place in “Baryshnikov.”

“I like making comedies, I like when people laugh, ” Povolotsky said. “I'm not a very deep director like, for instance, Andrey Zvyagintsev. Actually, I’m pretty above-ground. So, it’s easier for me to establish contact with new people, especially a young crowd. I’m more of a clown — that must be the remains of my performing career.”

“My Dad Baryshnikov” will be screened at the Atlanta Jewish Film Festival on Feb. 20, and will appear at other film festivals throughout the spring. It can be viewed in Russian without English subtitles at www.ivi.ru; DVDs with English subtitles are available at www.ozon.ru. The film's international sales will begin at the Berlinale Film Festival.