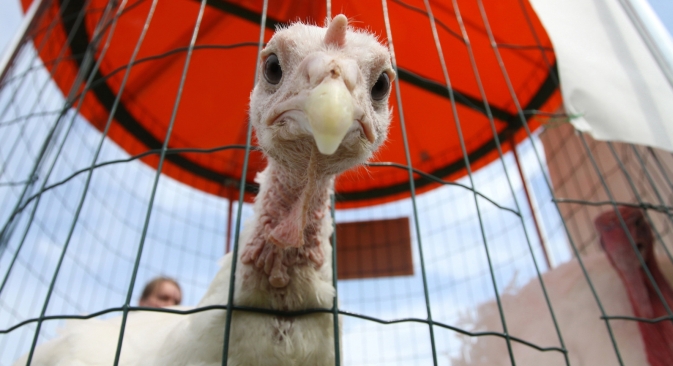 Toasting Turkey Day in Russia has become increasingly widespread both among Americans and Russians. Source: PhotoXPress

From hunting down wild turkey to stowing canned sweet potato in a suitcase, Americans find a way to celebrate Thanksgiving - and include their Russian friends.

As Americans in Minneapolis or Cincinnati sit down to turkey and pumpkin pie today, they’ll be joined by their compatriots in Moscow, Saratov and Vladivostok. Whether cooking with friends in an apartment kitchen, or sitting down to a spread at the Ritz-Carlton, toasting Turkey Day in Russia has become increasingly widespread - among Americans and Russians alike.

Back to Moscow: Lessons learned living at "home"

American colonists first began hosting a harvest feast in the 1620s, an extension of Protestant practices brought over from post-Reformation England. In modern America, Thanksgiving is held on the last Thursday in November, and mainly associated with a family meal. It also boasts a few quirky sideshows: every year, the president “pardons” a turkey, the traditional centerpiece of the meal, from slaughter. This year, President Barack Obama pardoned Cobbler (as well as the back-up bird, Gobbler) in a ceremony in the Rose Garden.

Since 1995, expat favorite Starlite Diner has offered an annual Thanksgiving dinner that includes turkey, mashed potatoes, gravy and pumpkin pie—along with a few Moscow-ready additions, such as Caesar salad (890 rubles in all, or $28). A whole turkey with sides is also available for advance order and pick-up until the Tuesday before Thanksgiving.

“We weren’t really looking to the geopolitics of Indians and settlers and the English and all that,” said Starlite founder Shawn McKenna. “It’s just a good, old-fashioned comfort food holiday.” Just like stateside, diners can sink into their food coma to the accompaniment of a live NFL broadcast.

Other Americana-themed restaurants are also celebrating. Chicago Prime has a full turkey spread that includes a glass of wine, a wedge salad to start and a slice of apple pie to finish (3,000 rubles), while Beverly Hills Diner offers turkey, pumpkin pie and other favorites a la carte.

According to McKenna, in recent years the number of restaurants in the capital serving Thanksgiving dinner has ballooned. “We used to have Thanksgiving somewhat all to ourselves, and now I see a lot of ads,” he said.

The ritziest table is laid at the Ritz-Carlton, whose restaurant offers a Saturday-night buffet of turkey and trimmings for 4,500 rubles. But these days, diners can also taste the American holiday at Latin American restaurant Navarro’s and even Coyote Ugly, which last year added girls dancing on a bar to the list of timeless Thanksgiving rituals.

While restaurant dinners attract a mostly Russian crowd, many Americans prefer to host gatherings at home. As Thursday is a workday (except for U.S. Embassy employees), most celebrations are held on the following Saturday—though some take the opportunity to enjoy both.

“Since my family doesn't live in Moscow, I'll be having two Thanksgivings to compensate: one on Thursday with an American family, and then another on Saturday with various Russian and American friends,” said Jonathan Simon, who manages the embassy commissary. “It'll be even more stuffing here than in the US!”

In a country where turkey is uncommon and canned pumpkin a non-entity, assembling a traditional Thanksgiving meal demands a bit of legwork. For the bird, some turn to markets like Dorogomilovsky and Danilovsky, which have stalls with vendors hawking wild turkeys—an antibiotic-free, albeit scrawnier, alternative to the poultry back home. Another, somewhat pricier option is ordering online from organic food cooperative Lavka Lavka, which offers home delivery. LavkaLavka’s biggest bird, from supplier Denis Pak, weighs around 8 kg and runs 6,440 rubles.

Those craving Butterball’s familiar plump breasts and artificial flavoring can try Finnish grocery chain Stockmann, which has several locations in the city. “Last year I ordered mine online,” said Sarah Martin, an internal communications assistant manager. “Stockmann sometimes has them, but not always, and that involves a trip beyond MKAD [the Moscow Ring Road].”

Canned ingredients that can’t be rustled up in Moscow advance planning. “I ask friends to bring canned sweet potato back [from the US] for sweet potato casserole,” said translator Sarah Gombert.

Gombert, like many Americans, include Russian friends in the festivities. “[Russians] get to try things they’ve never had before, like cranberry sauce,” she said.

Thomas Lowers, a DJ and English teacher in St. Petersburg, said he’s preparing a turkey dinner for his adult private students. “While I am in no way a supporter of the origins of this holiday… I can appreciate a day to celebrate being thankful for all that you have in life.”

Most Russians are aware of Thanksgiving through grade school lessons and pop culture. But understandably, the holiday’s balance of gratitude and gluttony can lead to confusion. “The Indians saved the Protestant colonists from starvation, and now every November they eat pumpkin and turkey with cranberry sauce, right?” said Maria Yemelyanova, who lives in Uglich.

“I remember that I described how they eat turkey and give thanks to God for a test in 11th grade. Yeah, that’s about it,” said teacher Olga Tkachenko.

Russians across the country can join in celebrations hosted by local chapters of American Corners, the library and community centers supported by the State Department. This year, the American Corner in Saratov is hosting an event that includes mingling with exchange program alumni and a thank-you note-writing contest.

Vladivostok’s American Corner hosted a Thanksgiving celebration last week with turkey and pumpkin pie, games—and a bit of history. “Everyone who came was divided into groups, and in one room they could hear a presentation about the origins of the holiday,” said center director Irina Filonenko. “It’s not only about food!”