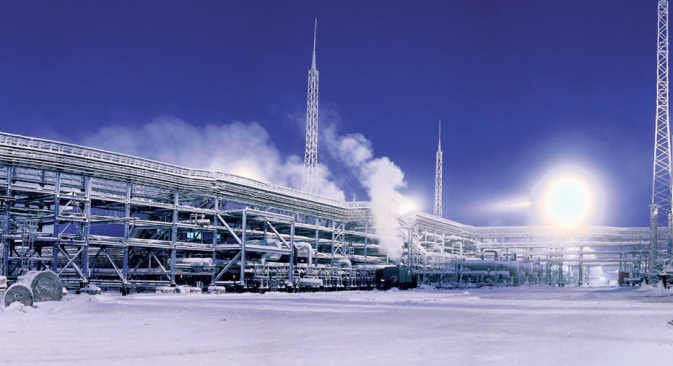 The construction of pipelines is booming, but will it be enough for Russia to compete with U.S.-produced shale gas?

Thanks to the shale revolution in the United States, the global gas market is entering a new golden age and Russia is straining every fiber to connect its gas pipelines to Europe.

Worn out by the endless gas disputes with Ukraine, Moscow has spared no expense on new pipelines to link Russia directly to Europe: Nord Stream to Germany, and South Stream to Italy.

In mid-November, Finland gave a green light to the construction of an additional two strings of the Nord Stream pipeline and further economic integration between Russia and Europe. One of the two new pipelines will run to the UK. A series of swap deals has provided Gazprom with enough funds to begin investments in the offshore route, said Konstantin Simonov, head of the National Energy Security Fund.

The plans to expand the pipeline were confirmed in October by Gazprom CEO Alexei Miller. Capacity is set to increase to up to 100 billion cubic metres a year — approximately the same amount of gas that Russia currently pumps through Ukraine.

The South Stream project, due to run under the Black Sea to Bulgaria and onwards overland through Hungary, Serbia, and Slovenia as far as Italy, is developing much more slowly.

In mid-November, Gazprom and Bulgaria signed an agreement on a final investment decision on construction within the country's territory, according to RIA Novosti. Start of construction is scheduled for Dec. 7. Four strings are to be built in total, each with a capacity of 15.75 billion cubic metres. The first deliveries are slated for December 2015, and commercial supplies will come on line in the first quarter of 2016.

The two pipelines should ultimately be enough to break Russia's dependence on the problematic supply route through Ukraine. However, Moscow may want to hang on a moment before severing gas ties completely. Europe's third energy package stipulates that providers cannot use more than 50 percent of pipeline capacity.

According to Mikhail Krutikhin of RusEnergy, more than half the capacity of the first two branches of Nord Stream is not utilized. Demand for gas in Europe is not growing, and Germany has yet to indicate its interest in additional gas supplies from Russia. This view is backed by official statistics. In its opening year of operation, the first branch of Nord Stream was loaded to just 30-40 percent capacity, delivering a total of 9 billion cubic metres of gas.

Experts at the Energy Center of the Skolkovo Business School are sure that the risk factor regarding Russian gas on the European market is rising. Demand will not recover until 2018 at the earliest, while spot trading is growing in leaps and bounds: 30-40 percent a year. As a result, the commercial and political appeal of Russian gas is waning noticeably. At the same time, LNG supplies are on the rise and gas at power plants is being replaced with coal and other resources.

Miller is inclined to blame the problems on the third energy package, which he says ties the company's hands. He complains that Gazprom can no longer rely on the use of adequate transport facilities to deliver gas inside the EU.

Moscow and Berlin are united in trying to influence the situation. In mid-November, German Chancellor Angela Merkel said her country would insist that suppliers be allowed to use 100 percent of gas pipeline capacity in the European Union in the absence of other contenders. Whereas in theory South Stream could have other suppliers, since it will run from oil fields in the Caspian Sea, Nord Stream's only possible supplier is Gazprom.

In its drive to string new pipelines together, Moscow has to constantly look over its shoulder at the results of the shale revolution in the United States.

Shale is not only forcing importers of traditional fossil fuels out of the U.S. market: At the current rate of production growth, in just 10 years the U.S. could itself become a major exporter of LNG to the global market. However, according to the experts at Skolkovo Business School, 1,000 cubic metres of U.S.-produced gas would cost $320 (€250) on the European market.

Preliminary estimates also indicate that this would be the production cost of shale gas in Poland. Hence, if suppliers of natural gas curb their appetites, they will have no trouble in keeping shale gas out of Europe simply by offering a lower price.

Nevertheless, the increase in the fuel supply has already reduced demand for Russian gas in Europe, and the Russian authorities have been forced to acknowledge the problem. In October, Russian President Vladimir Putin instructed Gazprom to analyze the market and report back on the company's export policy, focusing on shale gas. However, soon after, Gazprom announced that it was studying the prospects of shale oil, not shale gas.

Russia has about 7 percent of world shale gas reserves, and they are mostly located in easily accessible areas near St Petersburg and the Volga region.

"Perhaps in the future, the higher cost of shale gas production will be offset by lower outlays on transportation, and extraction will turn a profit, but a decision on any large-scale operations in Russia can only be made after the level of reserves and the cost of production are confirmed. That could take 10-15 years", said Valery Yazev, head of the Russian Gas Society and a member of the State Duma.

As things stand, the main market for Russian gas is Europe, but Moscow is actively searching for alternatives, since the main growth in demand over the coming years is projected to come from Asia. According to experts at the Skolkovo Business School, by 2030 demand in China alone will grow from 150 billion cubic metres to 430-450 million.

However, Konstantin Simonov says that the promising Chinese market is a problematic alternative, despite the long border between the two countries. Russia is now in talks on supplying pipeline gas to the country, but even disregarding  the Middle Kingdom's tough stance on price, the source of raw materials will not be new fields in Eastern Siberia, but old reserves in Western Siberian.

"It is quite a defeatist concept to take gas from Europe and give it to China", said Simonov.

Another prospective consumer of Eastern Siberian fuel is India. In early October, Gazprom signed a 20-year contract to supply LNG to India's Gail, plus memoranda of intent with several other energy majors. Beginning 2019, Gail will receive 2.5 million metric tonnes of liquefied natural gas per year. India could actually be a more attractive partner for Russia since it has already agreed to buy LNG, according to Simonov.

The gas agreement with India will strengthen Russia's positions in its dealings with China.

"It will be a good way to put pressure on the country", said Mikhail Delyagin, director of the Moscow-based Institute of Globalisation Studies. "It is another step towards concluding a proper large-scale agreement with China. As the Chinese taught me, the best way to haggle is to walk away."