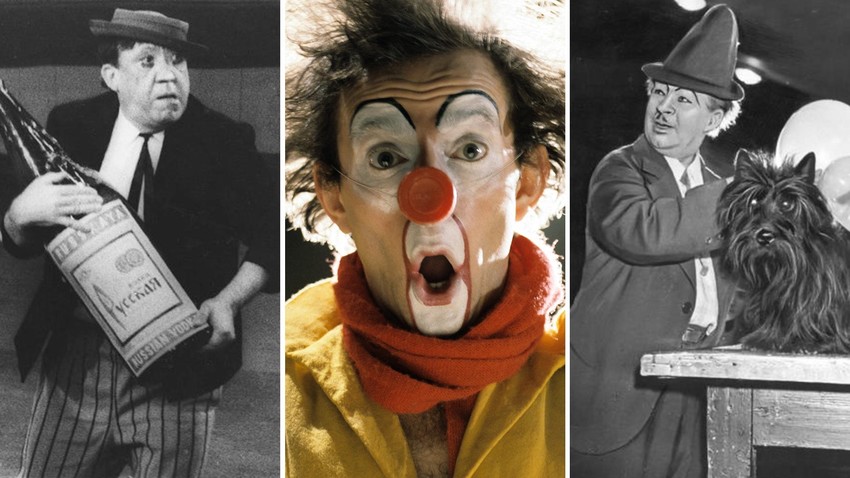 Yuri Belinsky/Sputnik; Yevgeny Ivanov, Semyon Mishin-Morgenshtern/MAMM/MDF/russiainphoto.ru
Just like any other clowns, they wore funny clothes, had painted faces and behaved in a silly way. Funny enough, in the Soviet Union, circus clowns probably played more important roles than silver screen stars. They helped those behind the Iron Curtain cope with mundane matters, proving the age old adage that laughter is always the best medicine. 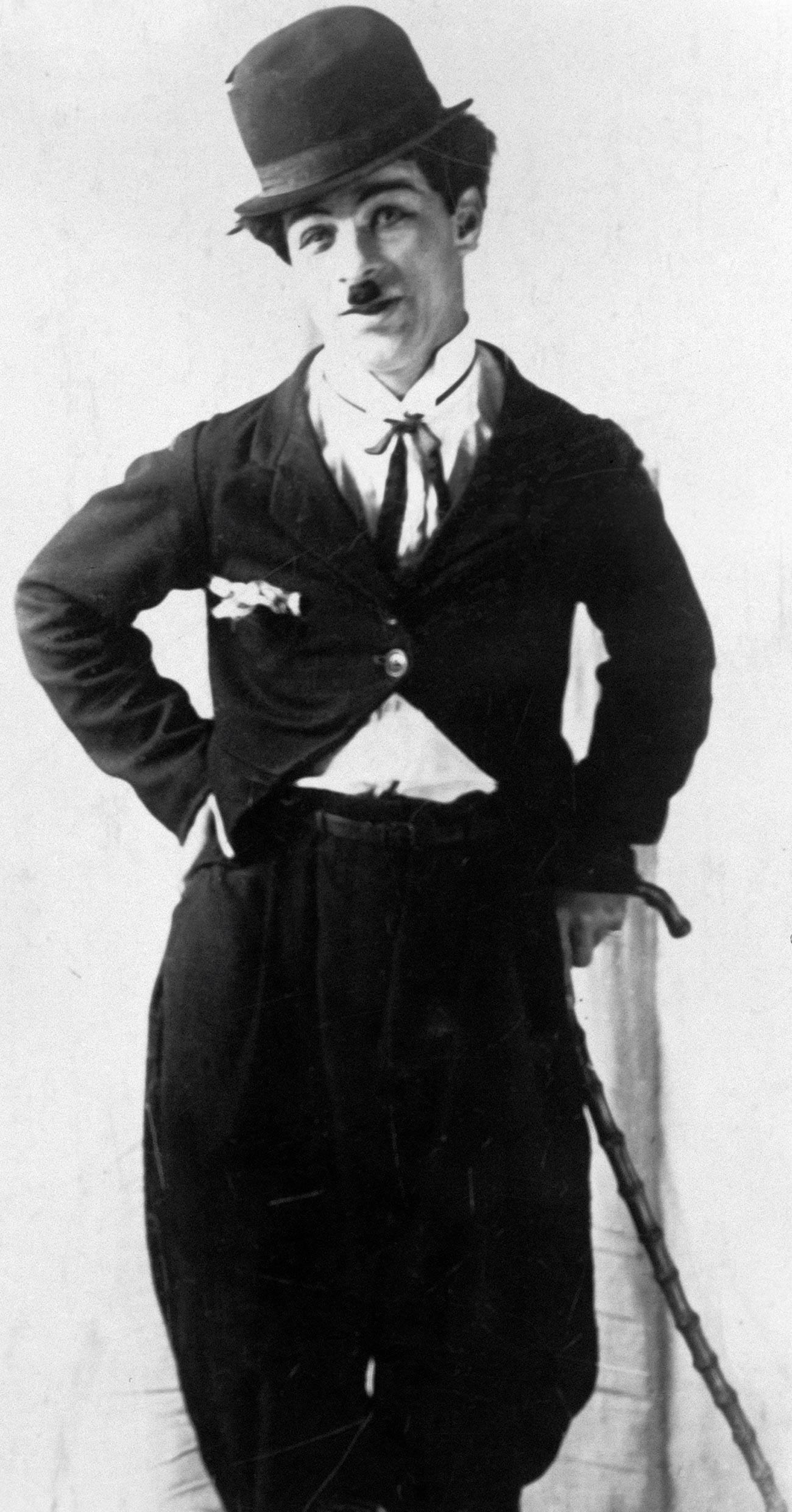 Mikhail Rumyanyntsev was much inspired by Charlie Chaplin’s famous character, the Tramp.

Mikhail never cried over bad grades at school - he was born with a gift of laughter. At the beginning of his career in the late 1920s, Rumyantsev was profoundly moved and inspired by Charlie Chaplin’s famous character, the Tramp. Like Chaplin, Rumyantsev, whose stage name was Karandash (“The Pencil”), was also fairly clumsy, awkward and funny, and constantly found himself in embarrassing situations.

There was something innately comical and sad about him. He would turn up on stage dressed in an oversized suit and a hat. Despite being very short, just 142 cm tall (that’s less than five feet) he never worried about his looks (his wife was tall, beautiful and twenty years younger than him). The way he carried himself left no chance for an inferiority complex.

Rumyantsev’s partner in crime on stage was a Scottish Terrier nicknamed ‘The Blot’. During his long career, Karandash had performed with at least 13 Scotties. 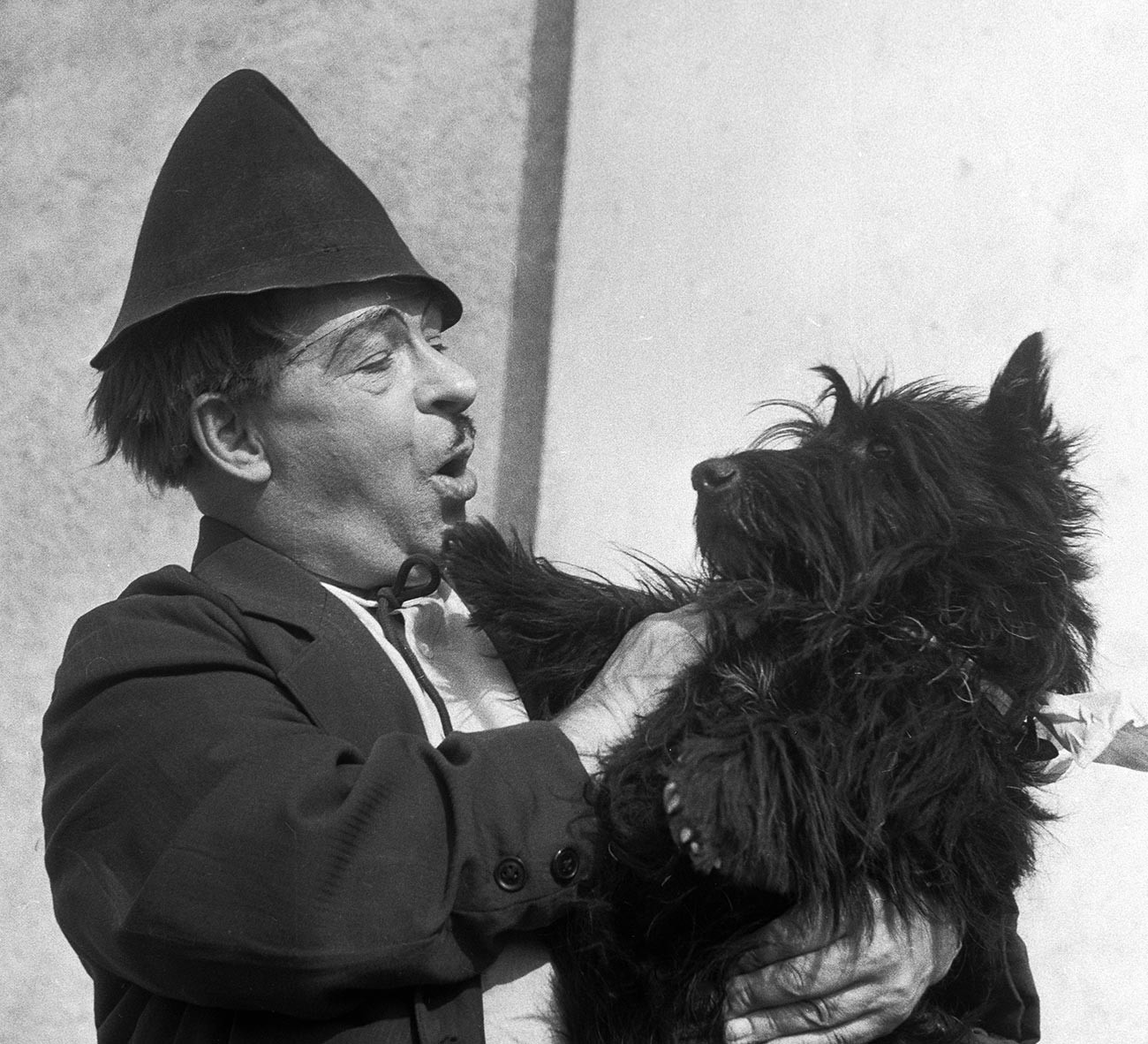 Rumyantsev’s partner in crime on stage was a Scottish Terrier.

Rumyantsev actually became a clown quite by chance. In 1926, America’s sweetheart of silent cinema Mary Pickford and one of Hollywood’s founding fathers, Douglas Fairbanks, paid a visit to the Soviet Union. Rumyantsev saw the pair and decided to become an artist. He chose his stage name in 1935, to pay tribute to the 19th century French satirist Caran D’ache (whose pseudonym, in its turn, was a creative French transcription of karandash (карандаш), the Russian word for ‘pencil’).

The Soviet artist worked in the circus for over 55 years and his name on the billboard was invariably the guarantee of a sold-out show. However, Karandash didn’t like posters with his name. His peers said he was too modest to brag about success. On stage, he was just an ordinary bloke, good-natured, witty, cheerful, full of childlike spontaneity and charm.

His performances crossed genres, boasting stunts in acrobatics and gymnastics. Karandash became the first Soviet clown whose popularity transcended the geographical barriers of that time. In his best years, he had an army of fans in Finland, France, UK, Germany, Italy, Brazil and Uruguay.

For Russia’s most famous clown, hope and laughter are like Siamese twins, bound together at some physical level. A sense of humor once helped Slava get through the turbulent times. Which is why Slava brings laughter wherever he goes. 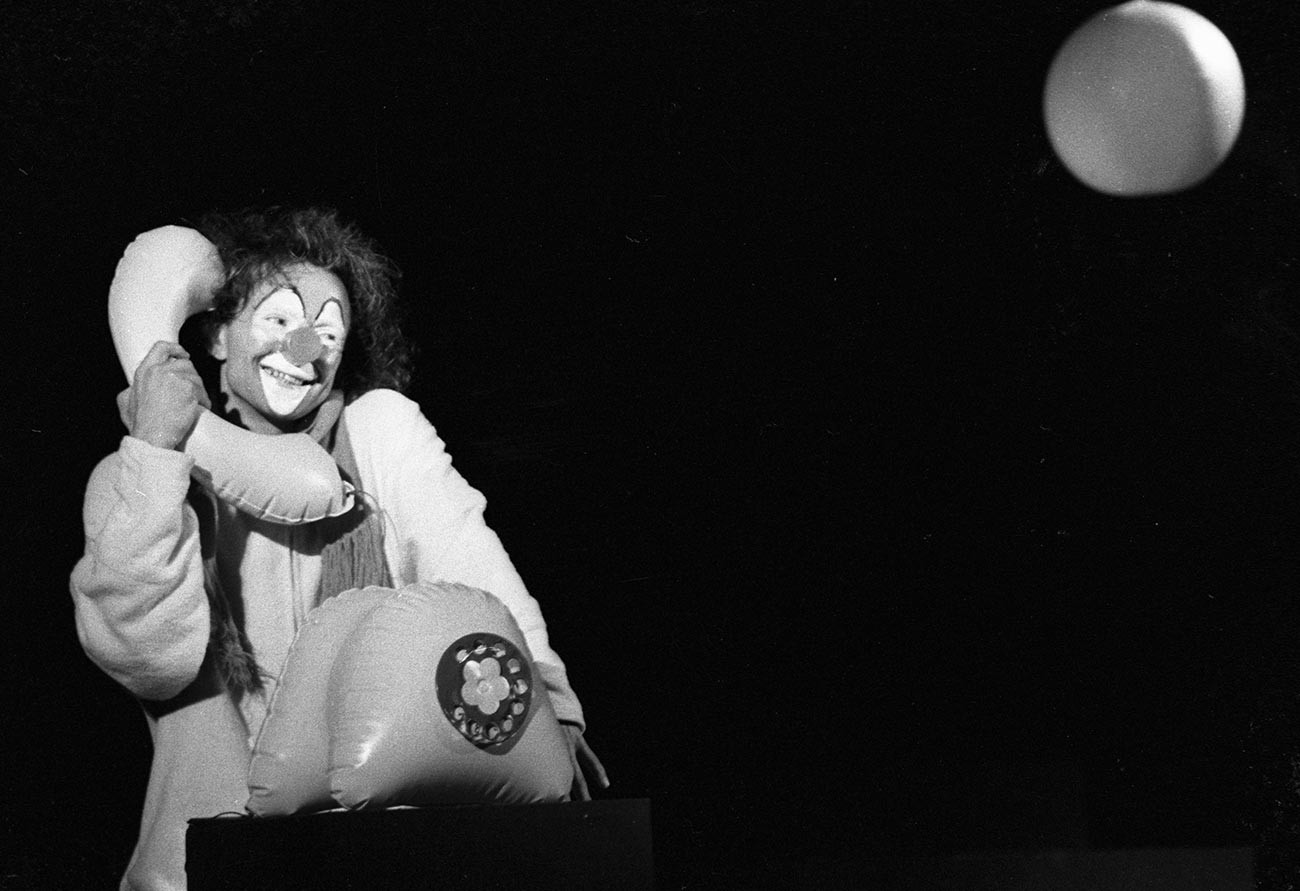 One of the founders of the Litsedei pantomime theater in St. Petersburg, Polunin is a master of tragi-comedy. His yellow clown character ‘Assissai’ became the epitome of comic relief.

Polunin made headlines shortly before the Berlin Wall fell in 1989. He organized the so-called ‘Peace Caravan’, in which mimes and clowns from across the globe got together to give street performances in Europe.

His major tour de force – ‘Slava’s Snowshow’ – has been staged in more than 80 countries worldwide, praised for warmth and wit, wisdom and sadness. Veering between laughter and tears, it was nominated for the Tony Award for Best Special Theatrical Event and won dozens of theatrical awards, including the coveted Laurence Olivier award in 1998. 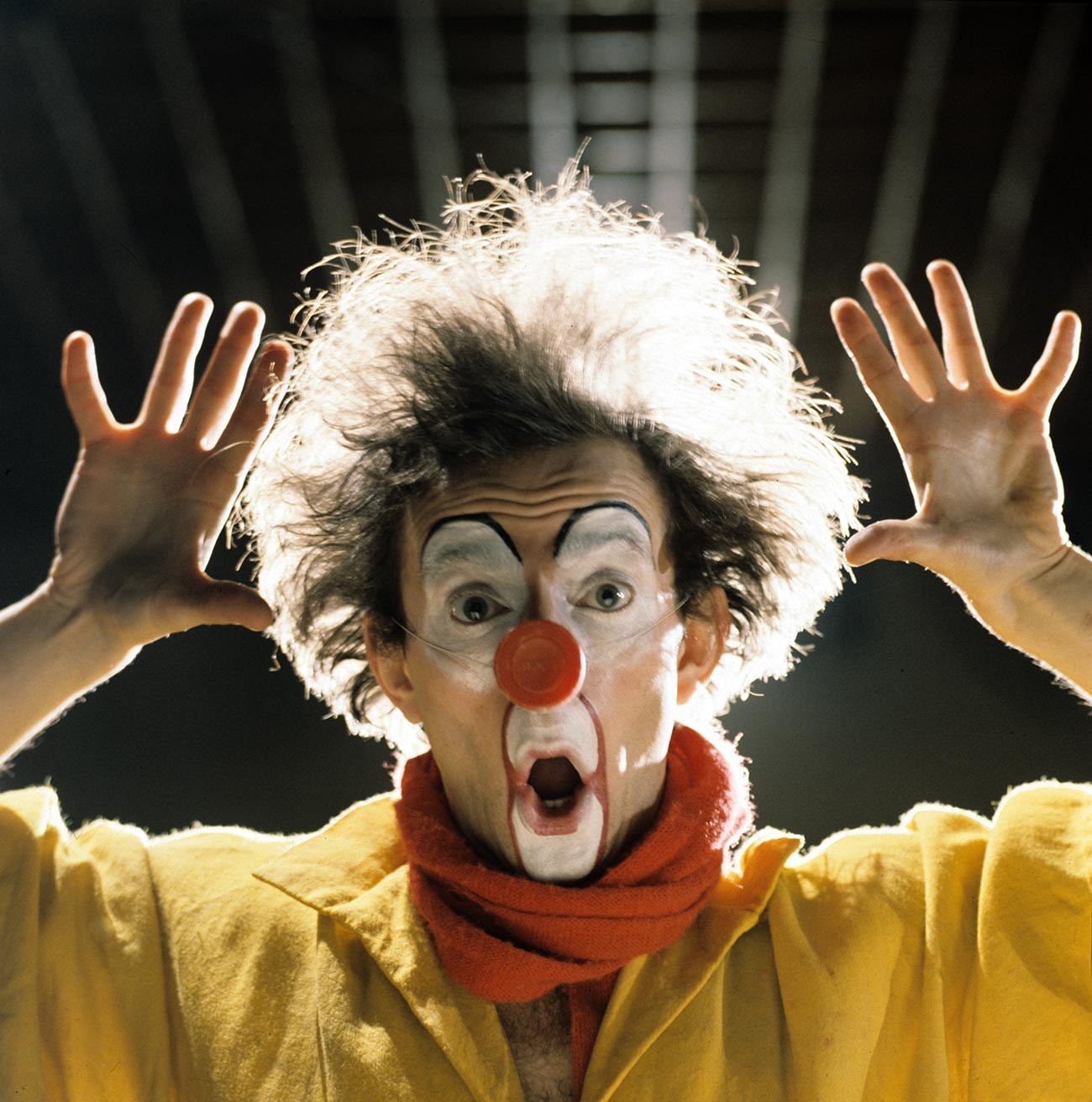 His major tour de force – ‘Slava’s Snowshow’ – has been staged in more than 80 countries worldwide.

Polunin’s signature theatrical performances are like this: you laugh to keep from crying. Slava blends freedom with anarchy as naturally as a knowledgeable bartender mixes tomato juice with vodka. Polunin did himself a big favor when he allowed himself to be not only the clown, but also the artist and the thinker.

There’s a fine line between fake and genuine laughter. Legendary Soviet actor Yuri Nikulin never crossed that line, probably because he went through two wars (the Winter War and WWII). For him, laughter was more serious than tears. 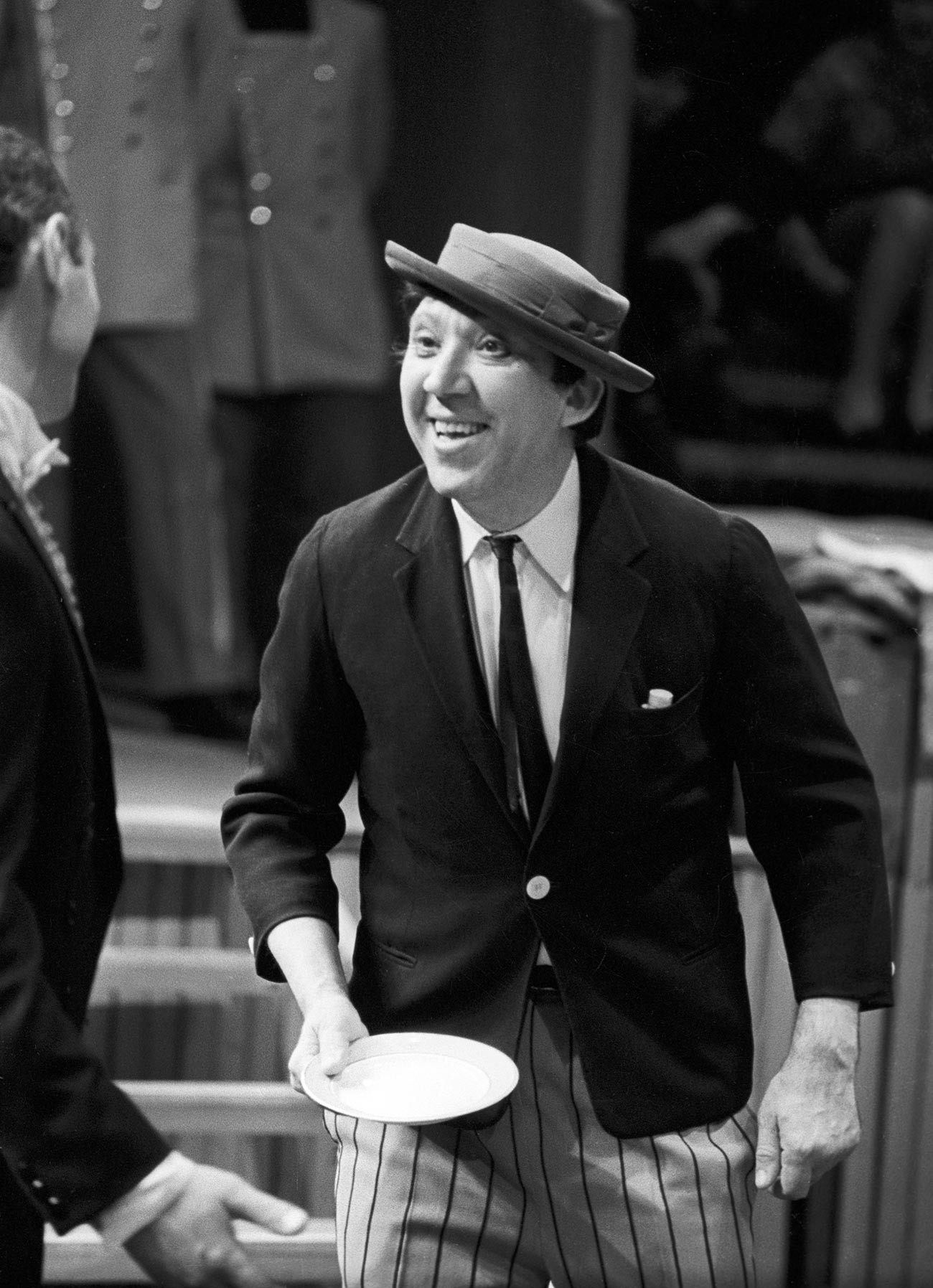 Yuri Nikulin became a clown out of despair.

Yuri, who loved the circus ever since he was a child, became a clown out of despair. After his lengthy military service, which exposed Nikulin’s deadpan comedic talents, the aspiring actor failed to earn admission to literally all drama schools in Moscow. Nikulin was convinced he had no talent and had no other choice than to enter the clown studio of the Moscow Circus school.

In 1950, Yuri joined the circus as an assistant to the famed clown, Karandash (see p. 1 above). Nikulin wanted to shine on stage, too, so he formed a duo with another aspiring clown named Mikhail Shuydin. Their duet collaborations juxtaposed the quiet and serious Nikulin with the unruly Shuydin.

Dressed in cropped trousers and oversized shoes, the duo made the audiences laugh hysterically. Some of their best performances, namely the famous ‘Alcoholics’ sketch, targeted adults, not kids. 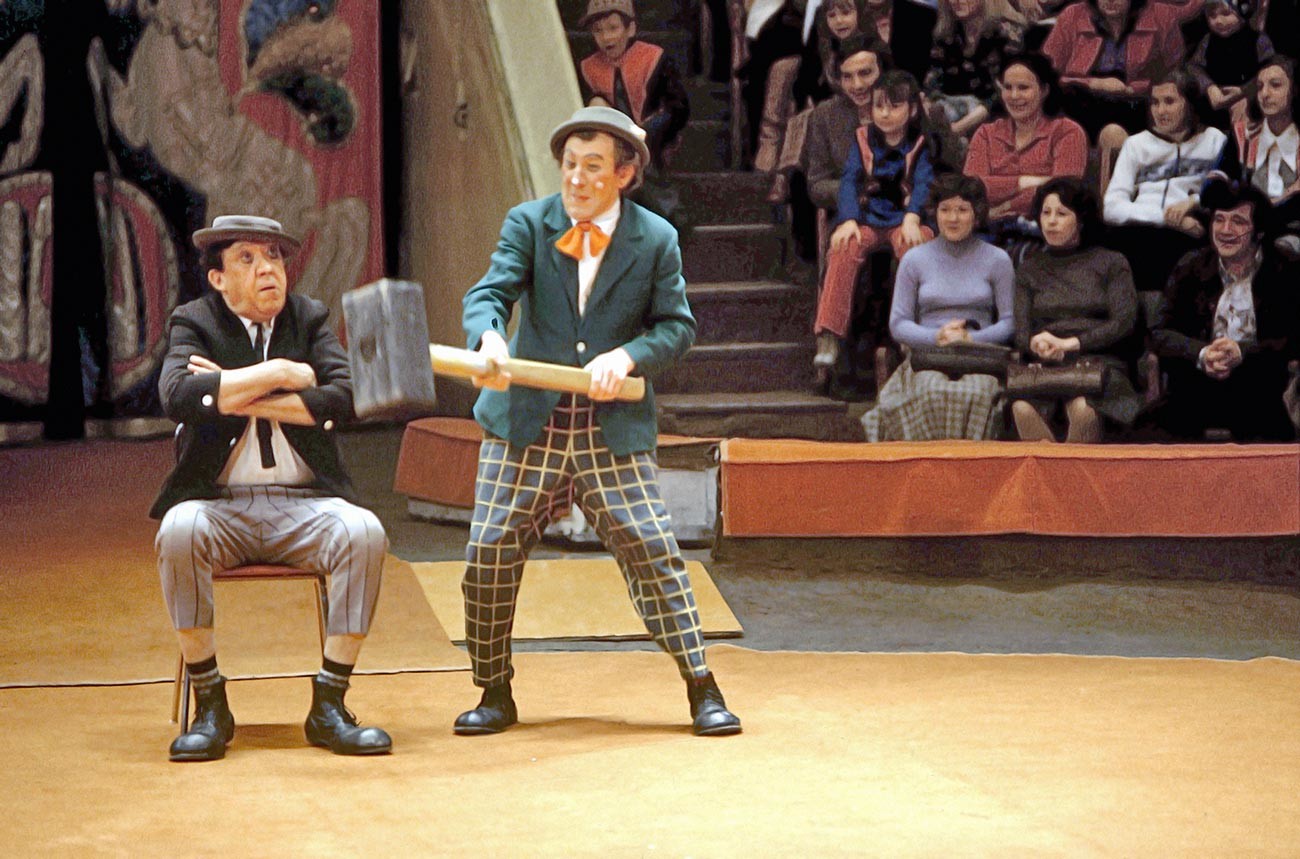 Yuri Nukulin and Mikhail Shuydin made the audiences laugh hysterically.

In 1982, Nikulin took charge of Moscow’s Circus on Tsvetnoy Boulevard. His dream to become a movie actor also came true. Nikulin starred in iconic Soviet comedies, such as ‘Diamond Hand’, ‘Operation Y’ and ‘Kidnapping, Caucasian Style’. His most memorable role was in Aleksey German’s war drama ’Twenty Days Without War’.

Popov’s first professional circus experience was that of an ‘eccentric tightrope walker’. The story could have ended there if not for a fortunate accident. 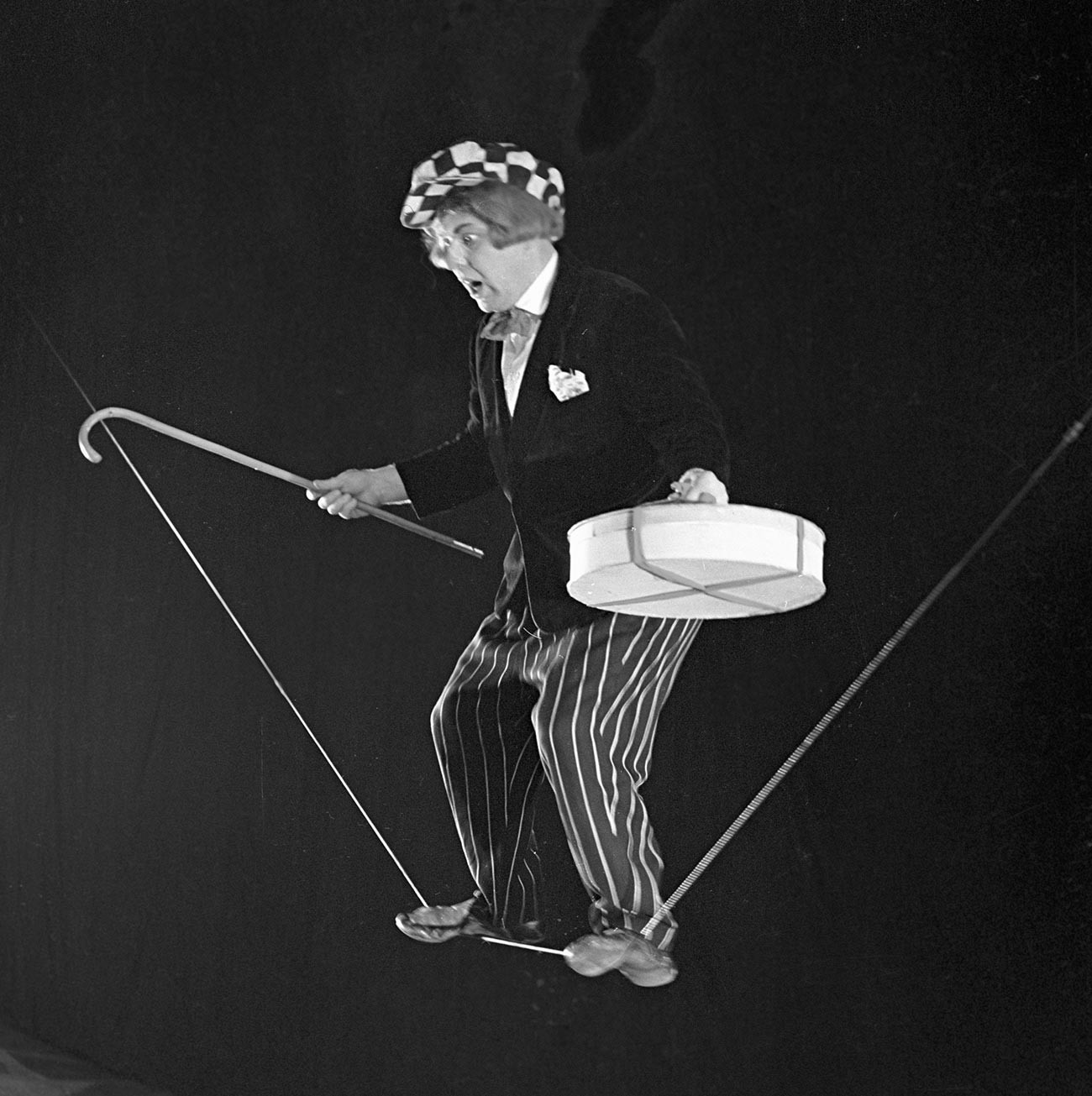 Popov’s first professional circus experience was that of an ‘eccentric tightrope walker’.

In 1954, the head clown injured his rib and Popov got the chance to fill in for him while on tour in Saratov, on the Volga River.

READ MORE: What were Soviet amusement parks like? (PHOTOS)

Oleg, a ridiculously charming young entertainer, wasted no time and took the stage by storm. Dressed in oversized striped pants and a checkered cap, he spiced his comedic skills with those of an acrobat and juggler. In the mid-1950s, he toured France, Belgium, Poland and the UK. The public loved him! 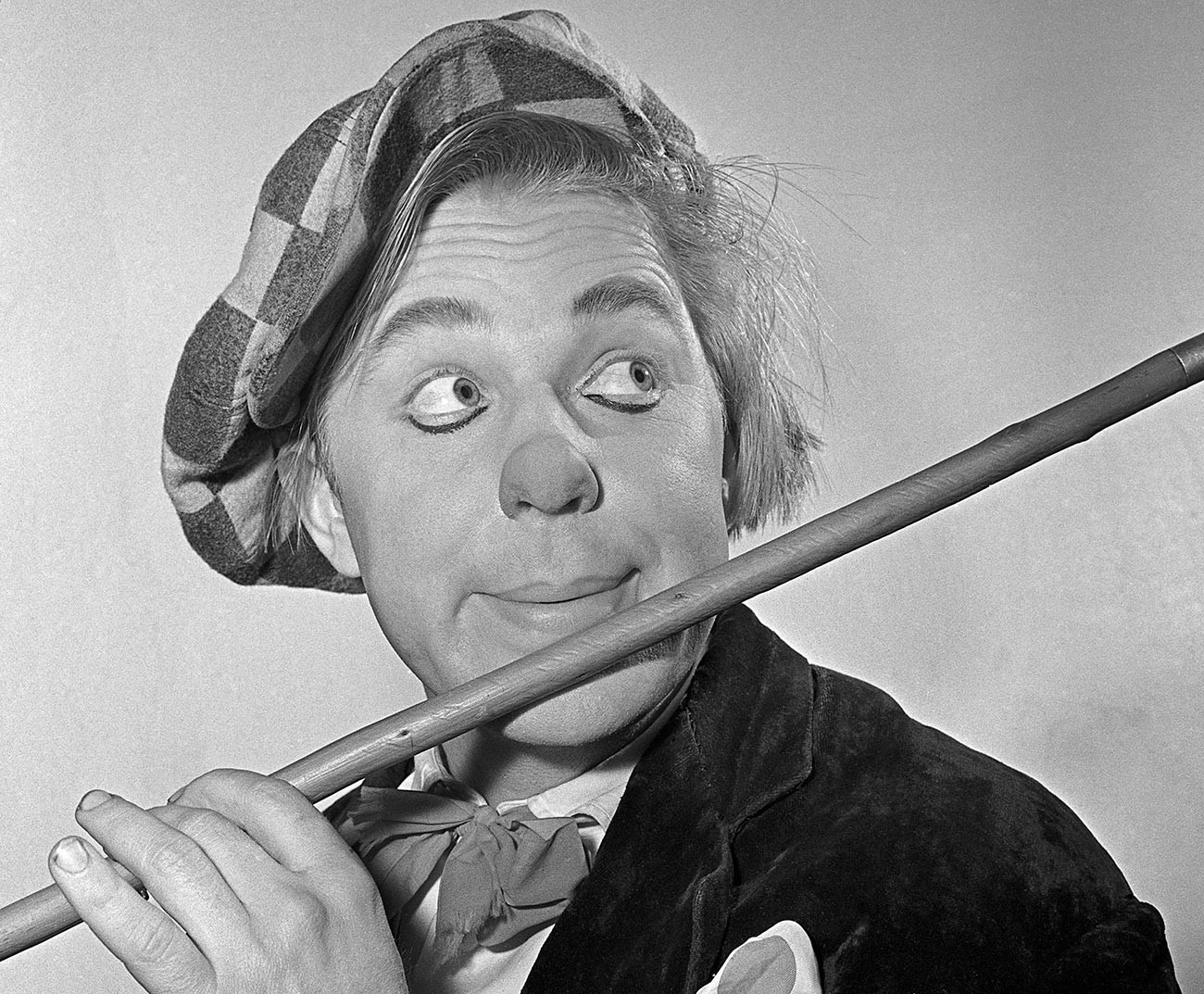 Oleg Popov had major-league comedic talent and was nicknamed the ‘Sunny Clown’. He radiated light and collected numerous awards over his lengthy career. After the collapse of the Soviet Union, one of Russia’s best loved clowns emigrated to Germany, where he lived out the rest of his life.

His sense of humor was like a love song set to a minor key. The challenge for Yengibarov was first and foremost to make the public contemplate, rather than laugh hysterically. Yengibarov’s character was akin to a poet. He embodied a melancholic and fragile-looking mime who exuded a no-nonsense intelligence and irony. 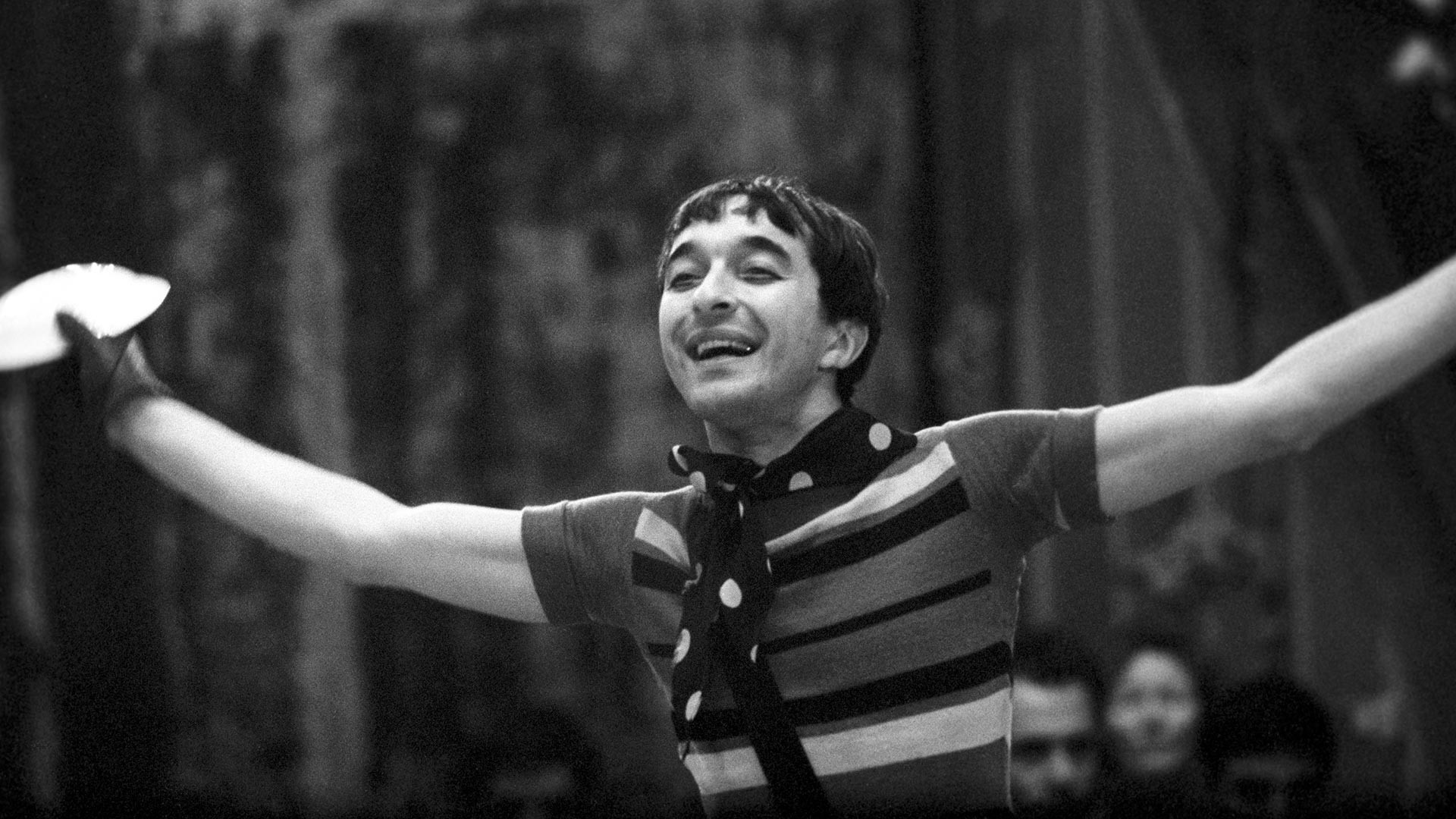 In 1964, he took home the first prize at the European Clown Competition in Prague.

It’s hard to believe, but Leonid started his career as a professional boxer. Yengibarov ended the 1953 Moscow boxing championship season with nine wins and only one defeat. Luckily, in 1955, he got fed up with professional sport and joined the State School of Circus Art. There, his skills in juggling, acrobatics and hand balancing were on full display.

After he received his diploma, Yengibarov, whose father was Armenian, moved to Yerevan and joined the local circus. In the early 1960s, he toured the USSR to large crowds. In 1964, he took home the first prize at the European Clown Competition in Prague. By the end of the 1960s, Yengibarov had won recognition as one of the most revered Soviet clowns. 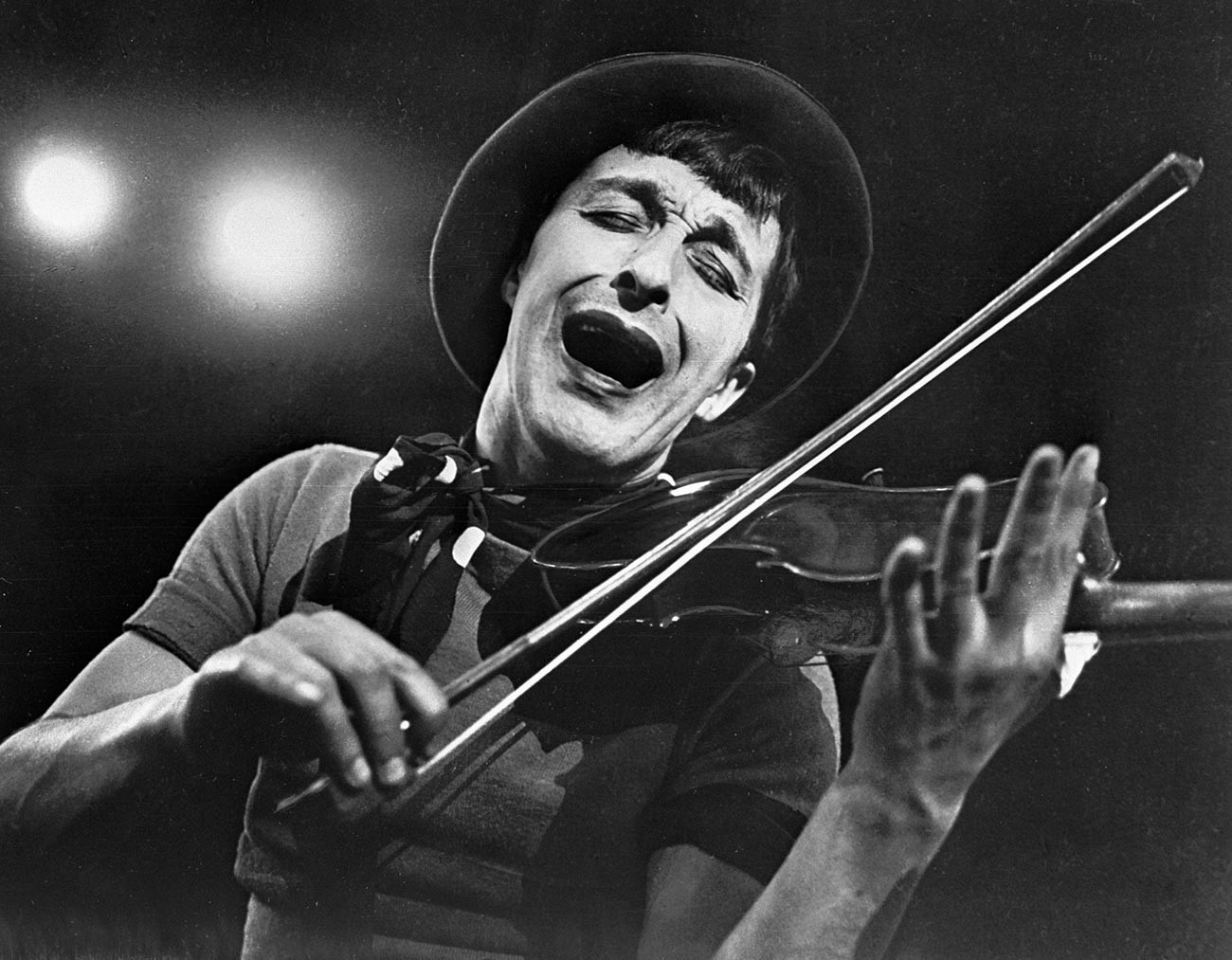 Yengibarov’s character was akin to a poet.