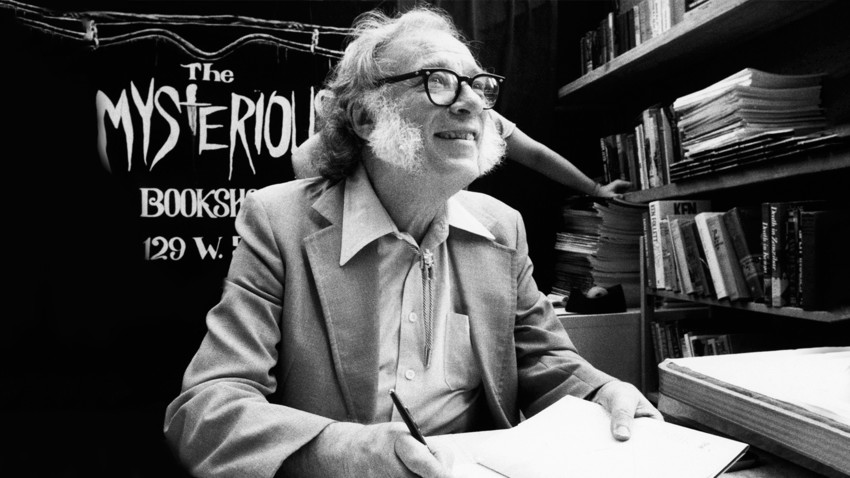 AP
Isaac Asimov made his first major voyage when he was three years old. Having been born in the Soviet Union, the creator of the famous three laws of robotics sailed across the Atlantic in the wake of the Bolshevik Revolution. There, he became an American sci-fi icon with a restless, fairly Russian soul.

The year 2020 marks the 100th anniversary of the birth of Isaac Asimov, one of the greatest sci-fi writers. Those who like to keep issues straight are pressing for an answer to the question: Was he Russian? Technically, no, but philosophically speaking, in a way. After all, the writer’s formal citizenship and place of living are only part of the picture and are not the be-all and end-all of their cultural identity and moral platform. 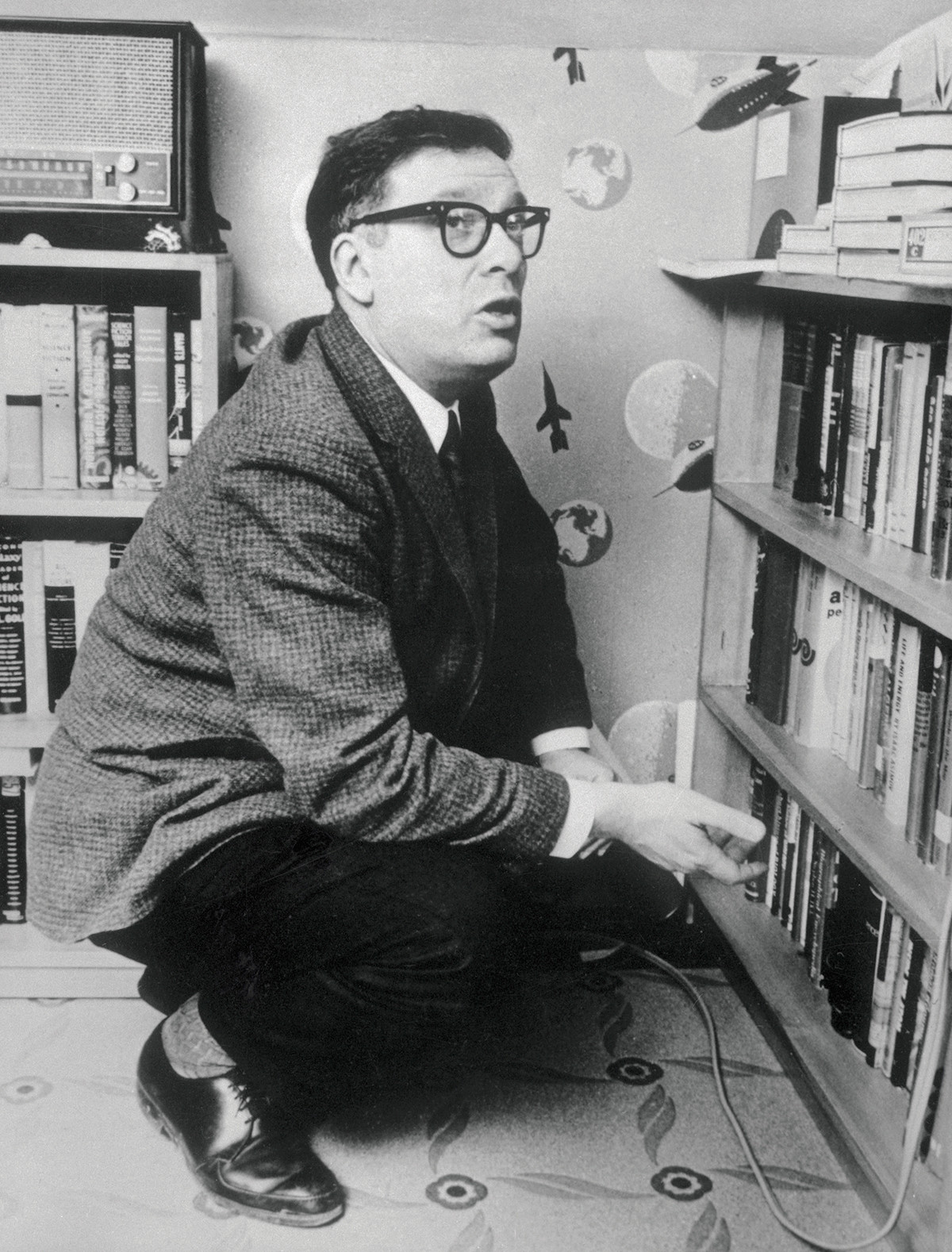 Asimov has been widely recognized as one of the greatest minds of the 20th century. Not only did he coin the term “robotics”, but also invented the Three Laws of Robotics: A robot may not injure a human being, or, through inaction, allow a human being to come to harm; a robot must obey the orders given it by human beings, except where such orders would conflict with the First Law; and a robot must protect its own existence as long as such protection does not conflict with the First or Second Laws.

Asimov’s biography reads more like one of a pathfinder, who made great breakthroughs in the areas of science, robotics, mathematics, astronomy and sociology, only to prove that his stories of imagination are not as fantastical and apocalyptic as they initially sound. The trailblazing Soviet-born writer was far ahead of his time when he reached the summit of science fiction.

Asimov (1920-1992) was born into a prosperous Jewish family in Petrovichi shtetl (a tiny town where Jews were the majority of the population) near Smolensk. At the age of three, he and his family left for the United States as a result of the Bolshevik Revolution. 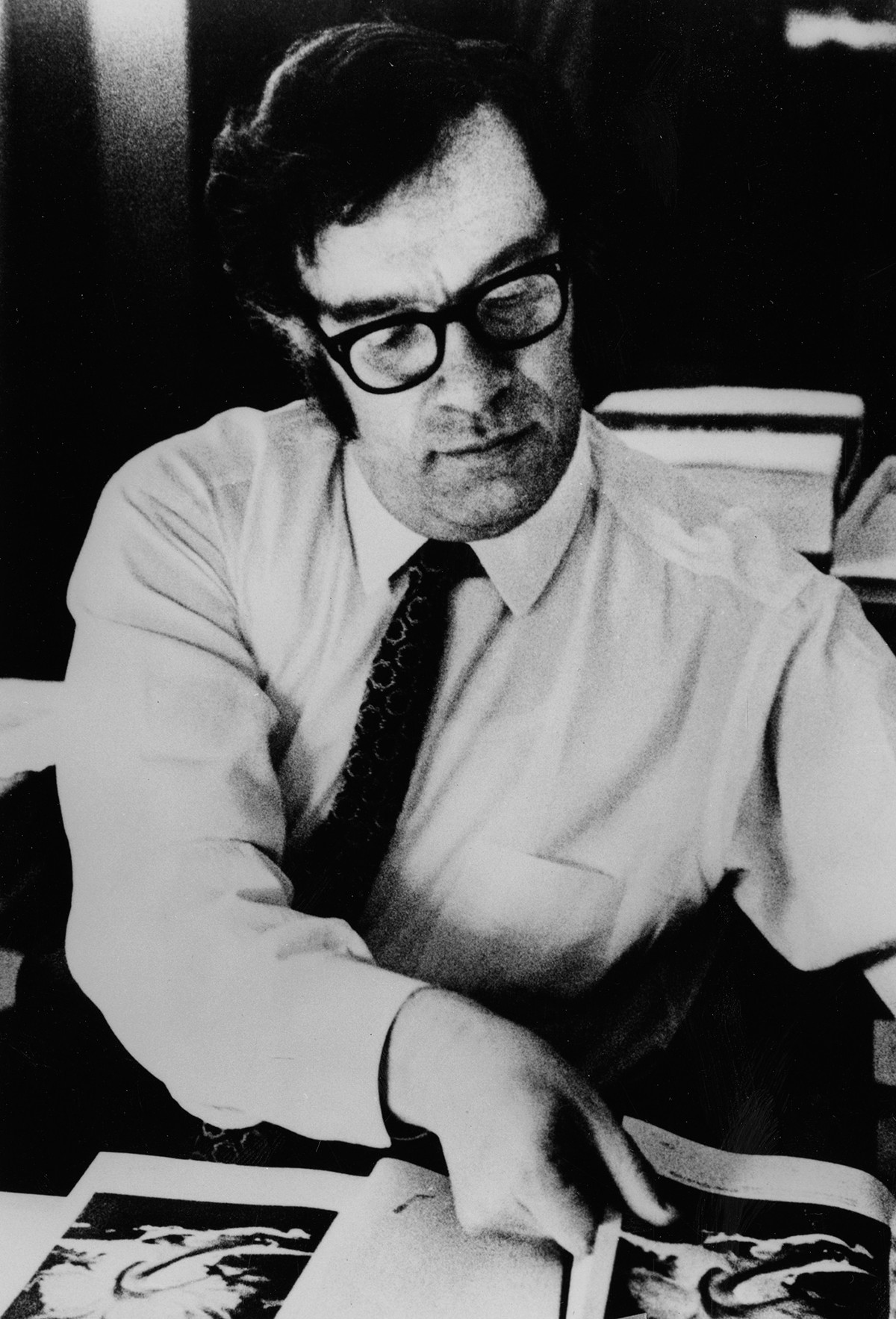 The creator of the famous three laws of robotics, Isaac Asimov.

Asimov’s father, whose family owned a gristmill and had lived in Petrovichi since the mid-18th century, had an intuitive feeling that the moral and social consequences of the Lenin-led revolution would badly affect his family’s security, putting it in jeopardy. “Until 1922, despite the dislocations of war, revolution and turmoil, he was doing fairly well in Russia, though, of course, if he had remained there, who knows what would have happened to him in the even darker days of Stalin’s tyranny, World War II and the Nazi occupation,” Asimov wrote in his memoir.

A family powwow took place where all agreed that the United States would be a safe haven for Isaac and his newborn sister Marcia. With Isaac’s mother having a half-brother living in New York, the idea to reunite with the family seemed good enough to try. The whole family landed at Ellis Island in 1923. “My father came to the United States in the hope of a better life for his children and this he certainly achieved,” Asimov recalled.

His father, Yudah, wanted to make Isaac’s life easier once the family moved to the U.S. This meant a lot of work and sacrifice. He took any job he could get, selling sponges, vacuum cleaners, working in a sweater factory. “In Russia, he was part of a reasonably prosperous merchant family. In the United States, he found himself penniless. In Russia, he had been an educated man, looked up to by those about him for his learning. In the United States, he found himself virtually illiterate, for he could not read or even speak English. What’s more, he had no education that would be counted as such by secular Americans. He found himself looked down upon as an ignorant immigrant.”

His father’s enormous personal sacrifice left a lasting psychological imprint on Asimov. He never ceased learning, even in retirement, as if he wanted to prove to himself that he belongs.

"There is a cult of ignorance in the United States and there has always been," Asimov bitterly remarked in an essay in 1980.

Asimov proudly recalled that his dad, who finally saved enough money to open a small candy store in New York, could “speak, read and write Russian with great fluency and was well read in Russian literature”.

His mother, Anna Rachel, “looked like a typical Russian peasant woman”. She was literate and could read and write both in Russian and Yiddish.

According to Isaac, he had a serious complaint against both his parents. “They spoke Russian to each other when they wanted to discuss something privately that my big ears were not to hear. Had they sacrificed this trivial urge for privacy and spoken to me in Russian, I would have picked it up like a sponge and had a second world language,” the writer lamented.

Nonetheless, Isaac made up for his parents’ lack of education. A bright prodigy, he taught himself to read when he was 5, graduated from high school at 15 and from Columbia University with a degree in chemistry at only 19. Ten years later, he became professor of biochemistry at the Boston University School of Medicine. 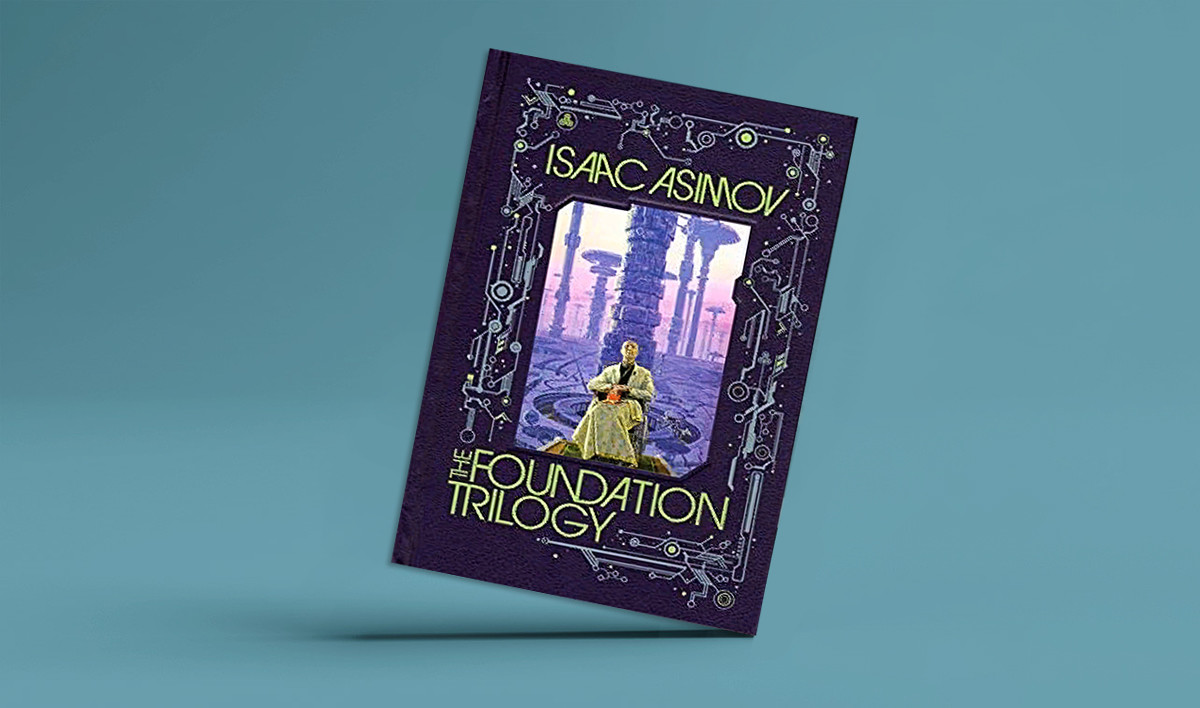 Asimov began contributing stories to science-fiction magazines in 1939. He wrote and edited around five hundred books, blending science with technology, history and culture. He wrote in a perpetuum mobile mode. “If my doctor told me I had only six minutes to live, I wouldn’t brood. I’d type a little faster,” Asimov once joked. The author of ‘The Foundation Trilogy’, ‘I, Robot’, and ‘The Bicentennial Man’ wrote science fiction books, as well as a guide to Shakespeare, Lord Byron, John Milton and even to the Bible. Like a long-distance runner, he wrote around ten volumes a year for over thirty years. The fanatical writer got up at six in the morning to stay glued to his typewriter for 15 hours at a stretch. 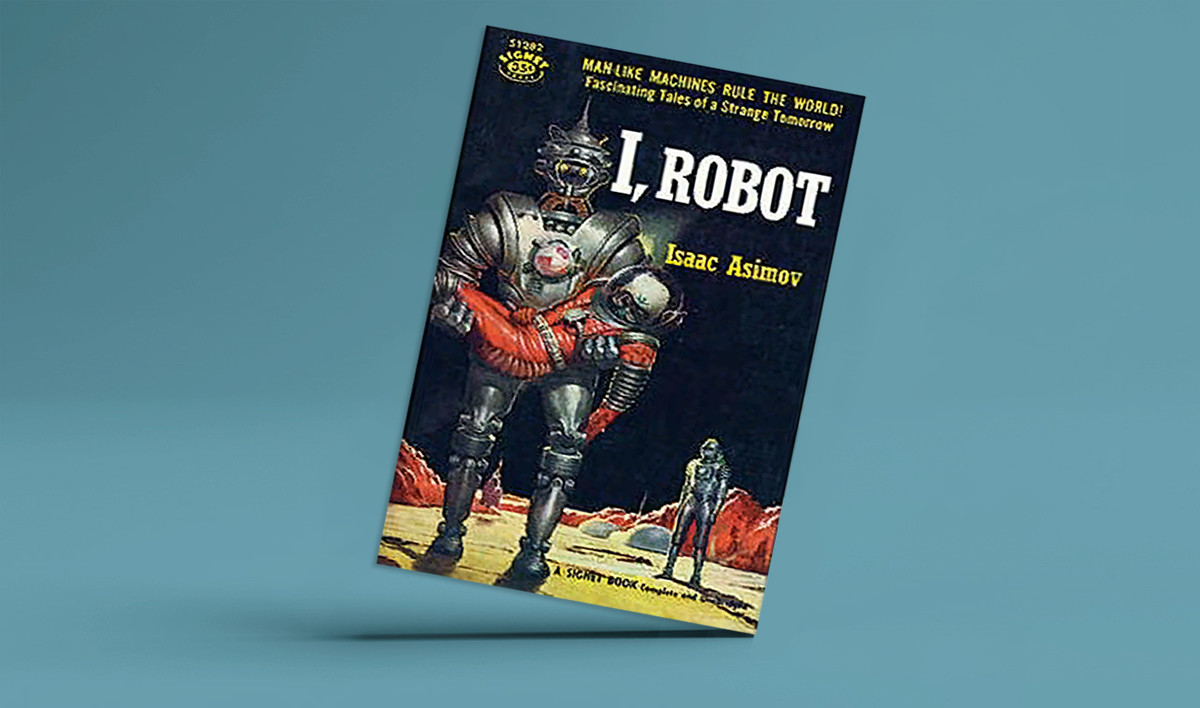 “The purpose of literature is to turn blood into ink,” American-born British poet T.S. Eliot believed. For Asimov, the challenge was to turn science into fiction.

Although Asimov spent his entire life in the United States, he somehow kept his place of birth in the back of his mind. The writer calculated the exact geographical position of his native shtetl, Petrovichi, (53 ° 58 ′ N, 32 ° 10 ′ E) to make a special mention of his motherland in his autobiography. 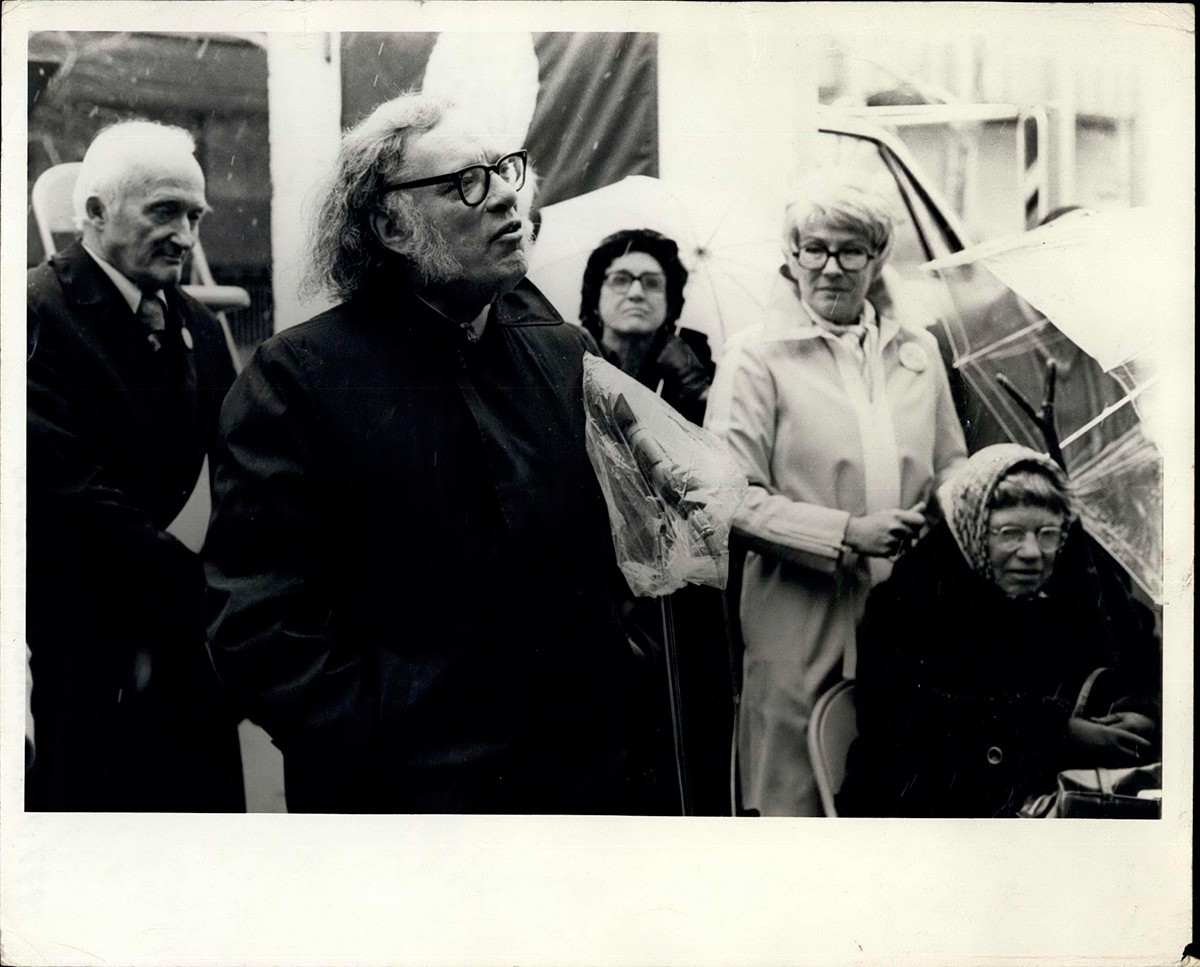 Asimov spoke fondly about the cultural thaw of the Khrushchev years.

Asimov, whose father received an education within the limits of Orthodox Judaism in Russia, believed that each individual, regardless of their race, education and citizenship, has the right to their own beliefs and spirituality.

“What I’m against is attempting to place a person’s belief system onto the nation or the world generally. You know, we object because we say constantly that the Soviet Union is trying to dominate the world, communize the world. Well, you know, the United States, I hope, is trying to democratize the world. But I certainly would be very much against trying to Christianize the world, or to Islamize it, or to Judaize it, or anything of the sort. And my objection to fundamentalism is not that they are fundamentalists, but that essentially they want me to be a fundamentalist, too,” he prophetically stated in an interview back in 1988.

Although Asimov didn’t speak Russian, he spoke fondly about the cultural thaw of the Khrushchev years and Soviet scientific achievements in particular. In the early 1960s, he compiled several anthologies of Soviet Science Fiction.

At first, his “dubious” views were of no interest to the U.S. intelligence services. But then, in 1960, an anonymous “well-wisher” wrote a letter to J. Edgar Hoover, the first Director of the FBI, asking to probe Asimov over his alleged communist sympathies, questioning the writer’s position “with respect to whether the Soviets had the first nuclear power plant”.

Hoover, who wasn’t born yesterday and had remained in office for nearly five decades, wrote on the margins of the letter: “We have no particular interest in his observations.”

Things took a much more serious turn in 1965, when the FBI investigated Asimov on suspicion of being a Soviet spy, codenamed ‘Robprof’. The agency received a leaked U.S. Communist Party list which featured Asimov’s name. Back at the time, the author of ‘The Genetic Code’ was  working at Boston University. The FBI reviewed his academic work to find out whether the acclaimed Soviet-born U.S. writer was actually a Soviet informant. The FBI monitored Asimov for two years until the agency finally dismissed suspicions.

Asimov was a lifelong workaholic and perfectionist. He predicted the rise of computers and robotics, foresaw that technology would impact education and was sure that children would no longer need teachers. 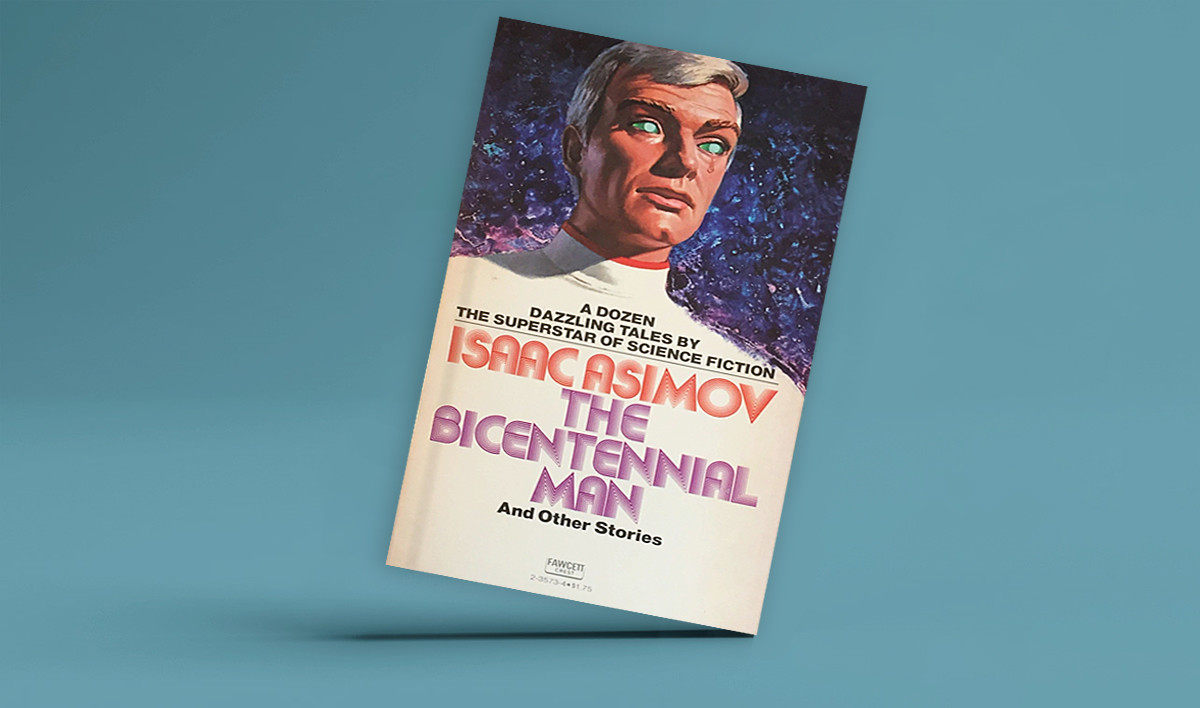 “Communications will become sight-sound and you will see as well as hear the person you telephone. The screen can be used not only to see the people you call but also for studying documents and photographs and reading passages from books. Synchronous satellites, hovering in space will make it possible for you to direct-dial any spot on earth, including the weather stations in Antarctica,” he wrote in an essay in 1964.

As for television, “wall screens will have replaced the ordinary set; but transparent cubes will be making their appearance in which three-dimensional viewing will be possible”.

“Kitchen units will be devised that will prepare ‘automeals’, heating water and converting it to coffee; toasting bread; frying, poaching or scrambling eggs, grilling bacon and so on. Breakfasts will be ‘ordered’ the night before to be ready by a specified hour the next morning. Complete lunches and dinners, with the food semi-prepared, will be stored in the freezer until ready for processing,” he wrote.

Like many an unorthodox genius, Asimov was guided as much by aspirations as by phobias. The man behind ‘The Gods Themselves’ was afraid of flying, opting for trains and cruise ships. Asimov was claustrophobic and never learned to swim or ride a bicycle. He had long suffered from severe heart problems and had a triple bypass operation in 1983. The blood transfusions he received during the surgery happened to be contaminated with HIV. The award-winning writer passed away of heart and kidney failure in 1992. 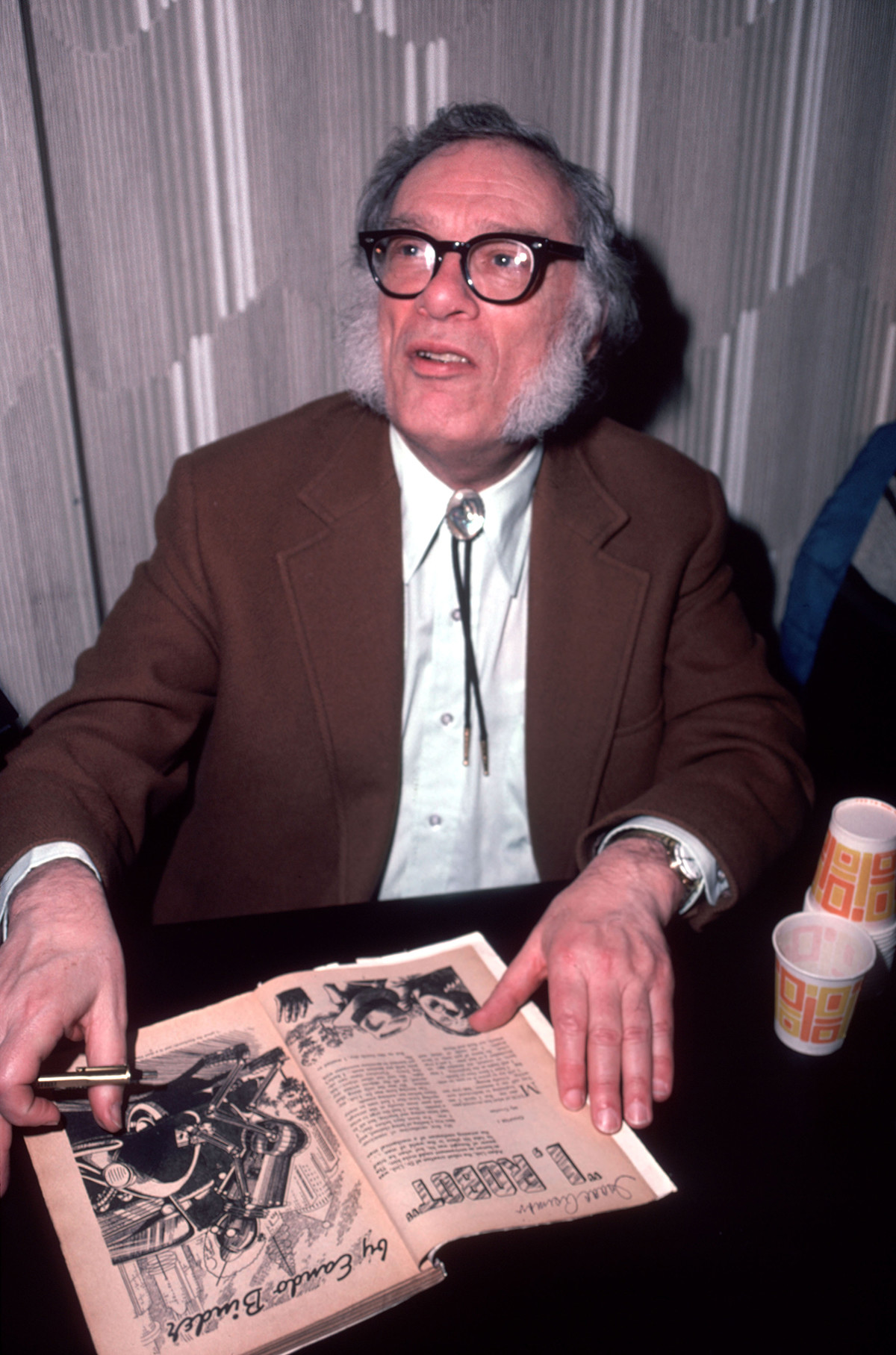 The year 2020 marks the 100th anniversary of the birth of Isaac Asimov.

In his interviews, Asimov often ironically acknowledged that he wrote for the same reason he breathed – “because if I didn't, I would die,” the prolific author once said. In a career that spanned half a century, Asimov left a rich legacy as an American writer, whose books introduced millions to science fiction. Although he had lived in the United States all his life, Dr. Asimov said he never quite forgot where he was born, in the Soviet Union.