Absurdity in an upside down world: Where did ‘Russian reversal’ jokes come from? 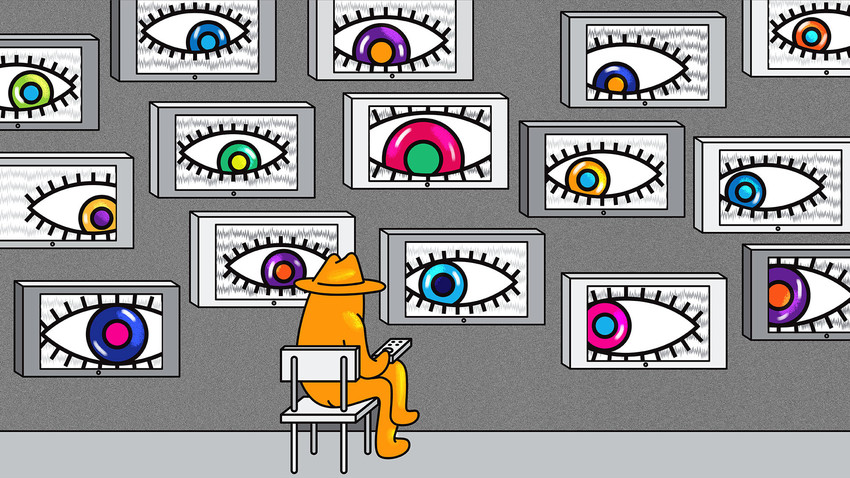 In Soviet Russia, TV watches you... all the TVs are watching you!

Natalya Nosova
Born in the U.S. amid the background of Cold War tension, “Russian reversal” jokes mocked the contrast between America and the USSR. Today, nearly 25 years after the Cold War ended, these jokes persist and have turned into a popular online meme. Read the article, but remember, in Soviet Russia the article reads YOU!!

1986. Ronald Reagan begins his second term as president and seeks mutual understanding with the new Soviet leader, Mikhail Gorbachev. The Cold War will be over in five years, but no one knows that yet. The world is tired of the 40-year-long confrontation, and this is when Yakov Smirnoff, a Russian-born American comedian, made his famous “In Soviet Russia” jokes.

In a Miller beer commercial, Smirnoff (who had nicknamed himself after the famous Russian vodka) appears in the company of young people drinking and laughing in a bar. “In America, there’s plenty of lite beer and you can always find a party!” Smirnoff says with a smile, but then recalls something from the Motherland and finishes: “…In Russia, the Party always finds you!”

The commercial was very popular, increasing Smirnoff’s fame. He became known as the author of the “Russian reversal” joke: You say something, and then replace the subject and object to show how absurd and (mostly) frightening life under Communism was.

Today, it’s mostly a popular Internet meme with its own rules. For example, since the USSR collapsed, “Russia” is referred to as “Soviet Russia” (to distinguish between the new state and its socialist past). Usually, the first sentence, describing “normal” life in the Western world, is omitted, and the second always with “YOU!!” with two exclamation points in italics.

“In America, you mistrust government. In Soviet Russia, government mistrusts YOU!!”

“In America, you finish . In Soviet Russia, sentence finishes YOU!!”

“In America, you break law. In Soviet Russia, the law breaks YOU!!”

Though Smirnoff popularized the joke, his originality is widely doubted. As Time wrote in 2015, comedian Bob Hope, who had just returned from a trip to Moscow, said during the 1958 Oscars ceremony that there was a TV in all the rooms of their Moscow hotel, “but it watches you.”

And there’s more! As Time mentioned in the same article, the story of “Russian reversal” probably goes back to 1938 when U.S. songwriter Cole Porter created the musical, Leave It to Me! In one scene a man tries to tip a but gets a strict answer: “No tipping. In Soviet Russia, messenger tips you.”

Anyway, we can be sure that jokes about Soviet Russia are old. It doesn’t mean that they don’t change as time passes. After the Cold War ended, the jokes became less political and closer to cheerful absurdity. Just look at these:

In Soviet Russia, toilet flushes YOU!!

In Soviet Russia, bar walks into YOU!!

In Soviet Russia, bank robs YOU!!

And so on. Sometimes Russian reversals work with iconic phrases from pop culture. Remember the old hit by MC Hammer, U Can’t Touch This? Well, guess what – in Soviet Russia, “this” can’t touch YOU!! And regarding the bank, there is another version: “In Soviet Russia, you rob . In Capitalist America, banks rob YOU!!” To some extent, it’s a philosophical question after all – Who robs Who?

In case you want to know more about Russian culture than Russian reversals, we have an article on why you should read Anton Chekhov right now. (Chekhov wouldn’t read you even in Soviet Russia for he is dead for more than a century.)