Ghosting, gaslighting and other nasty things: we found them in Russian history 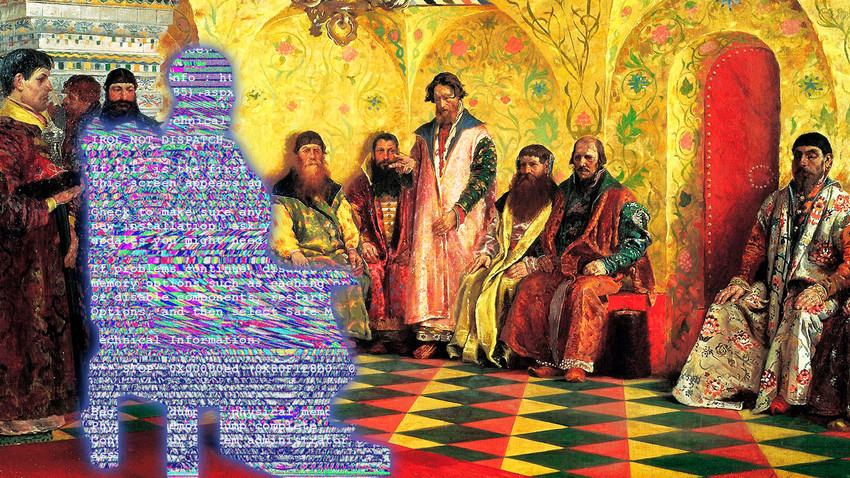 A. Ryabushkin
In a modern-day quarrel, we don’t call our opponents names. We resort instead to using sterile pop lingo. Gaslighting... ghosting... sexism – these nasty behaviors have existed for millennia, we just didn’t know what to call them. Here are some notable examples from Russian history.

Gaslighting is a manipulative technique aimed at convincing a person that he or she is not in full control of their mental faculties - usually to some nefarious end. One may gaslight one’s wife into believing she always forgets to turn off the iron, while in fact, the husband often forgets to do it himself.

The term originates from the iconic Alfred Hitchcock psychological thriller, ‘Gaslight’ (1944). But I can tell you, Russian history has no shortage of its own examples.

Catherine the Great, who ascended to the Russian throne by overthrowing her husband Peter III (and subsequently ordering his murder), had exhibited great contempt toward Grand Duke Paul, her son from the ill-fated husband. When Paul came of age and wanted to take part in governing the state, Catherine let the gossip spread (and probably spread it herself) that Paul is unstable and cruel – and even that he’s not Peter’s son, but a bastard she conceived out of wedlock.

Yes, Catherine would go to such lengths to gaslight her own son, and it really showed later. Indeed, Paul started to demonstrate cruelty and waywardness, especially after he finally took the throne after Catherine’s demise (it is believed, against his mother’s will). Catherine’s gaslighting worked.

“That’s not a woman’s job!” – just one harsh example of sexism that has been around for centuries. Catherine the Great herself had experienced this kind of harassment. Shortly after the coup d’etat that made her the Russian Empress, Nikita Panin, one of Russia’s highest civil servants, suggested forming an Imperial Council, a governing body of six to eight (male) members to assist the Empress in ruling the state. Catherine knew what Panin meant: many Russian high-flying noblemen feared that “a woman can’t rule the state properly.” (Catherine I, Elizabeth of Russia and Anna of Russia, who were Empresses before, were to a large extent manipulated by noblemen.) Catherine discarded Panin’s idea angrily, and the rest is history. That really showed for the first time that a Russian woman could rule just as well – if not better, than her male counterparts.

– “My boyfriend ghosted on me.”

Not answering calls, emails or messages, and, ultimately, refusing to acknowledge a person’s existence is called ghosting – in this case, the manipulator behaves as he or she is invisible or does not exist.

Tsar Ivan the Terrible once ghosted his entire people and tsardom by simply pretending he isn’t the tsar anymore. In 1575, Ivan abdicated the Russian throne and made Simeon Bekbulatovich, a Russian statesman of Tatar origin, the new Tsar. Ivan downgraded himself to the rank of a “simple” boyar – he even addressed Simeon as “Grand Duke and ruler of all Russia.” While Simeon lived in the Kremlin with all the tsarist luxury that went with it, Ivan just owned a house in Moscow. When people pleaded to him to solve their problems, Ivan said that he’s not the tsar anymore.

Simeon ruled for 11 months, and during his reign, many monasteries and dioceses were deprived of lands and money. When Ivan the Terrible “reinstated” himself as a Tsar, he “graciously returned” the lands and money to the monasteries – needless to say, most of the lands and gold went to the Tsar’s treasury. That was the aim and the point of Ivan hitting the ‘pause’ button on his own rule. Ghosting level: 99.

So the new terms we use these days seem to be just euphemisms for good old sins we all know. But they’re not entirely pointless.

In the past, not everyone could stand up straight, face their oppressors and accuse them of lies, fraud, rudeness or violating the borders. But with these complicated and menacing words, it became much easier. They sound like a diagnosis instead of an insult – which automatically elevates your authority to that of a medical doctor. Just imagine what more Catherine of Russia could have accomplished, had words like “sexism” and “gaslighting” existed as legitimate accusations back in the day.