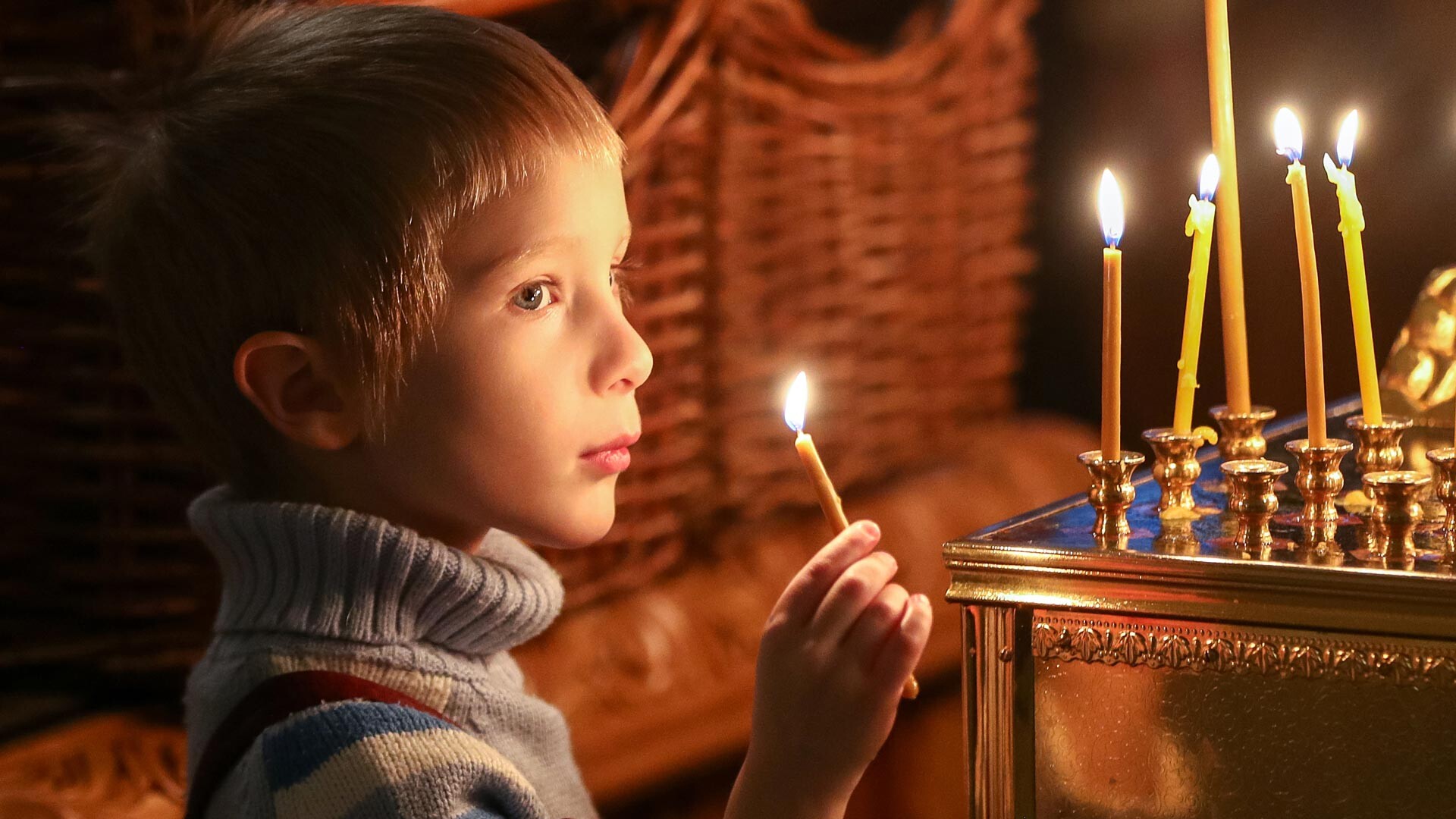 Mikhail Tereshchenko/TASS
There are plenty of holidays and honorary days in the Eastern Christianity that celebrate local saints and events. But, the following mark events in Christ’s life or are devoted to the Mother of God and are considered the most important and widely celebrated.

The main religious holiday in the Orthodox calendar is Easter, which marks the Resurrection of Christ. In Russia, it’s celebrated much more than even Christmas. Note that the dates of Orthodox and Catholic Easter hardly ever fall on the same day (here we explain why and the differences in traditions).

Russians love Easter because of many other reasons than just Jesus Christ - also, the end of the hard and long Lent and the beginning of real spring (which are usually the first warm days of the year), to name a few. The holiday also has strong ritual traditions - people paint eggs and decorate them in many creative ways, bake kulich Easter cakes and cook cottage cheese desserts called paskha (a translation of the word ‘Easter’ in Russian). On Easter Saturday, people line up outside churches to bless their eggs and cakes - and then, on Sunday morning, they eat them.

Besides Easter, there are twelve other important holidays that the Russian Orthodox Church celebrates. 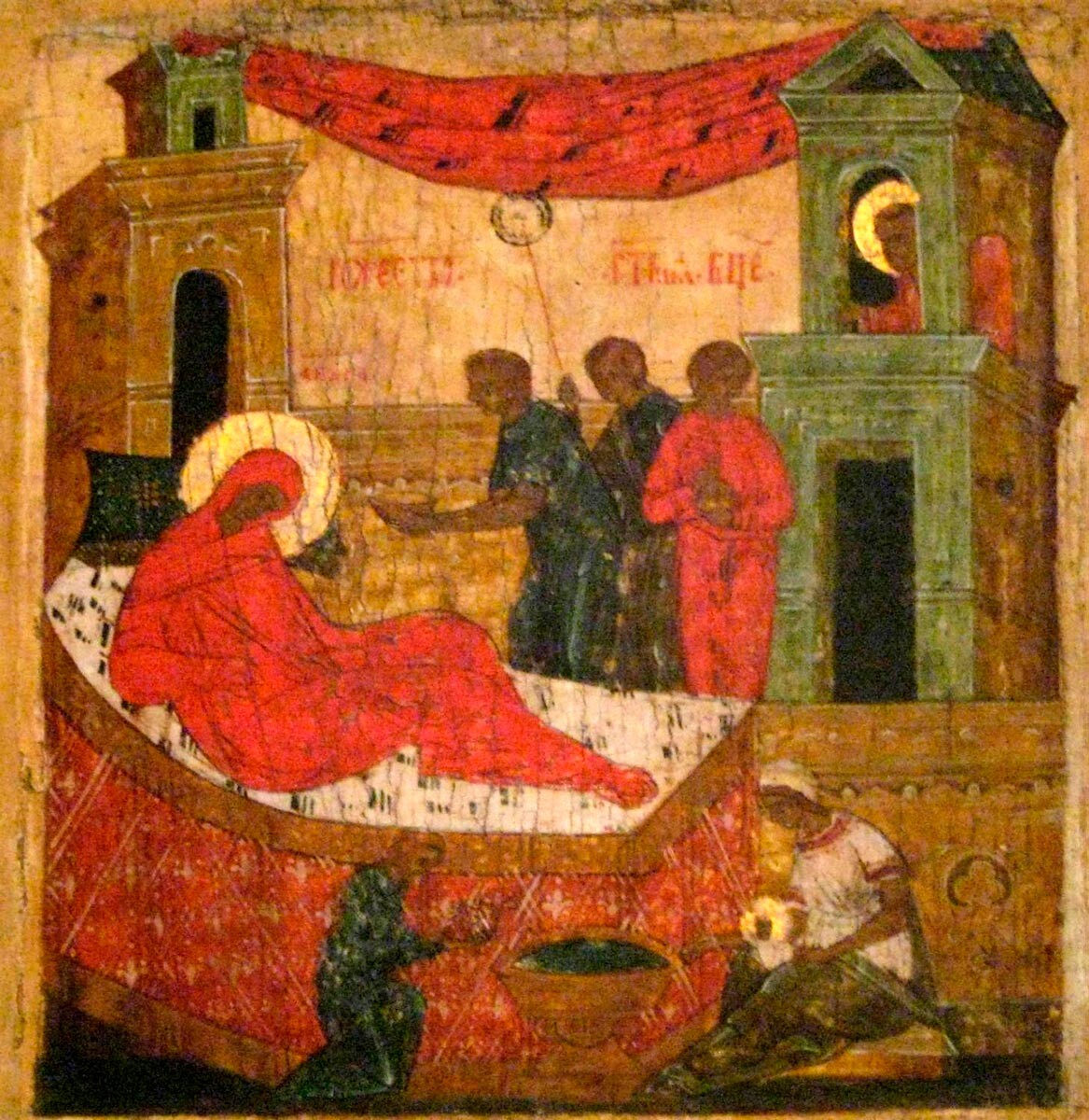 The Birth of the Virgin Mary, mother of Jesus Christ is usually celebrated on September 21. At the same time, nine months before this day, on December 9, the Conception of Righteous Anna is celebrated (and the Orthodox faith has an icon devoted to both days). For a long time, Saint Anna and Saint Joachim were childless and the Conception happened when visiting the holy land of Jerusalem.

Another pre-Christ holiday devoted to his mother Mary’s life, which celebrates the Entry of the Most Holy Theotokos into the Temple. Mary’s parents brought her to the Temple in Jerusalem to thank God for giving them a child. 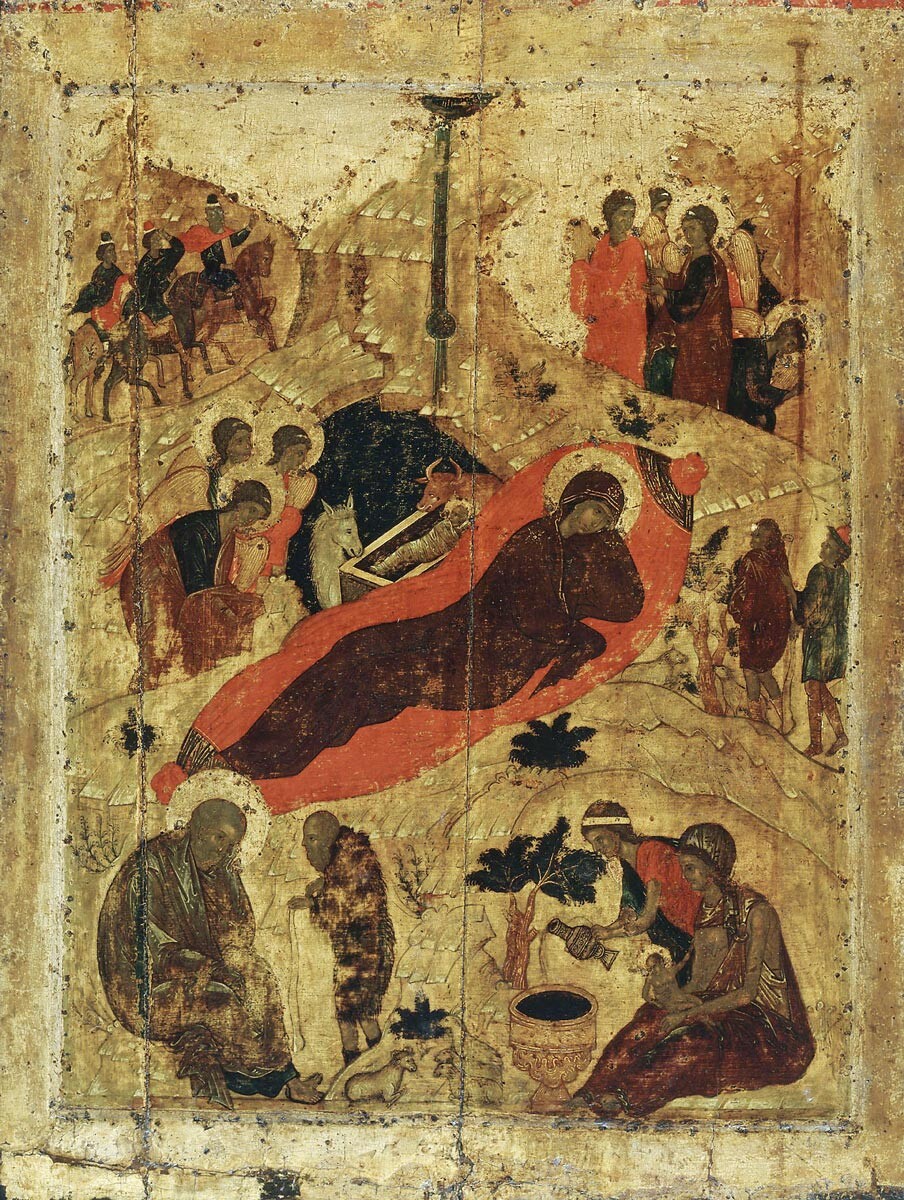 Andrei Rublev. Nativity of the Lord, 15th century. From the Annunciation Cathedral in Moscow

Unlike Catholics, Orthodox Christians celebrate the holiday on January 7. Such a difference is connected with the calendar switch that happened in Russia after the 1917 Revolution. And, for many years after that, Christmas was only celebrated secretly, as the Soviet authorities banned religion and all religious-related holidays. Instead, they tried to make up for it with massive, nationwide New Year celebrations.

In modern Russia, Christmas is still celebrated quietly, usually in a close circle of family and friends and usually even without presents (which are given on New Year’s Eve). Being a part of the long New Year holidays, it’s a day off - however, usually soon after Christmas, the working days begin, so people tired of celebrations try to get a final rest. Read more about Christmas celebrations in modern Russia and in tsarist times, when it had much more meaning for people.

On January 19, the Baptism of Jesus is widely celebrated across Russia. The weather during this time of the year is usually very harsh and there’s even an aphorism - ‘Epiphany frosts’. According to tradition, the night before the Epiphany and during the entire day, people dive into an ice hole called ‘Jordan’ that is made in the form of the Holy Cross. This act symbolizes the Baptism of Christ and it looks bizarre, considering that Jesus lived in a very warm part of the world! Check out photos from the Epiphany celebration in Russia.

The Feast of the Presentation of Jesus Christ celebrated on February 15 is usually marked with a big service in Orthodox churches and a nice bell ringing. Now, this holiday isn’t celebrated very widely across Russia. Believers either go to church or just recall this day (and try not to do any hard work). But, in Old Russia, this was a big day and people used to attribute some events appealing to this winter holiday “this happened on Candlemas” or “a week before Candlemas”, you still can hear from old people in Russia. 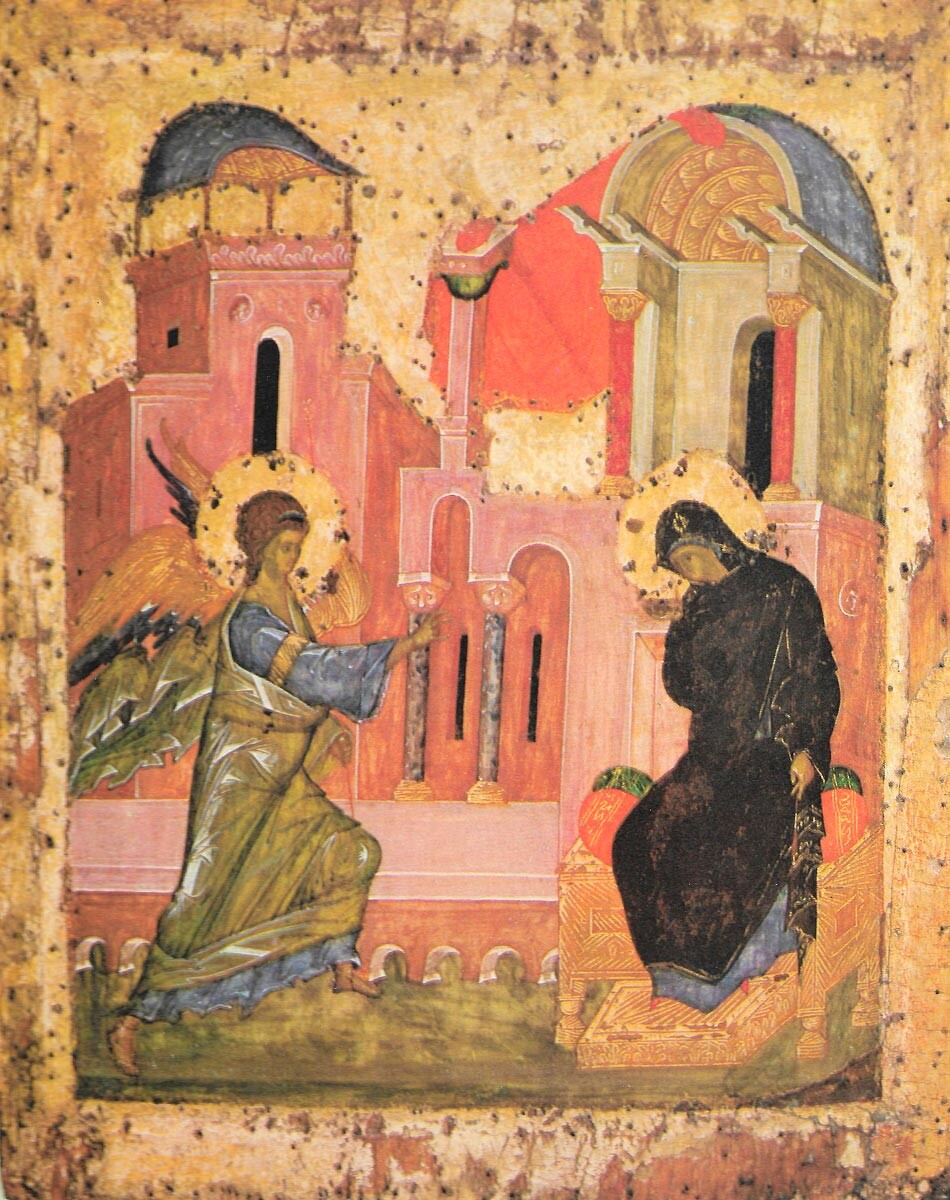 This holiday celebrates the annunciation to the Blessed Virgin Mary, when angel Gabriel told her that she would have a baby through the virgin birth and that this would be a Christian Messiah and Son of God. One of Russians’ most favorite holidays is celebrated on April 7, according to the Orthodox tradition. There are lots of icons and churches devoted to this holy day in Russia.

7. Feast of the Cross 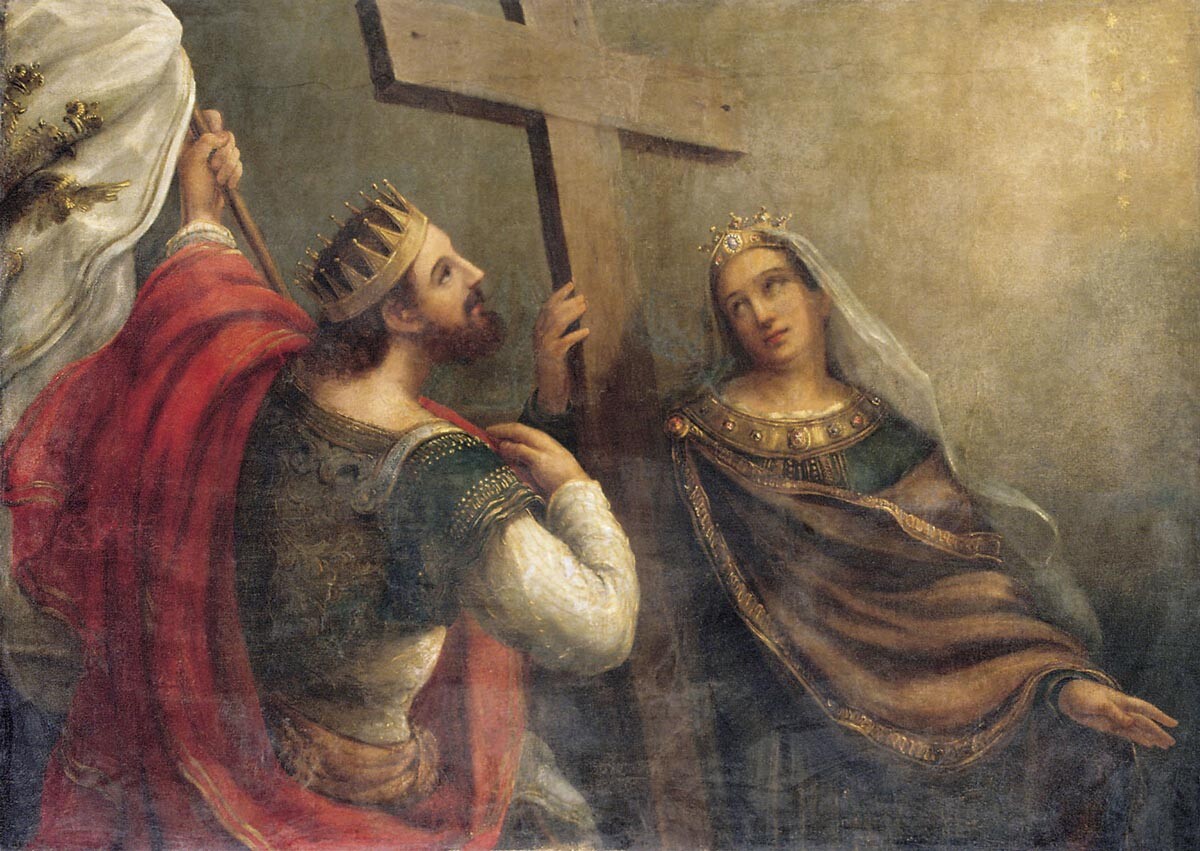 The Holy Cross Day is celebrated by the Orthodox Christians on September 27. The holiday marks the finding of the True Cross. According to legend, it was found by the mother of Emperor Constantine the Great, Empress Helen in around 300 AD. She initiated archaeological studies and, as a result, the cave of the Holy Sepulcher was found, as well as three crosses. A sick woman found healing after touching one of those crosses and it was determined as the Cross of Jesus Christ. The feast also marks the dedication of the Church of the Holy Sepulcher in Jerusalem. Russian believers usually do an All-night vigil (which means that they don’t sleep, but pray the whole night) and hold a hard Lent day. 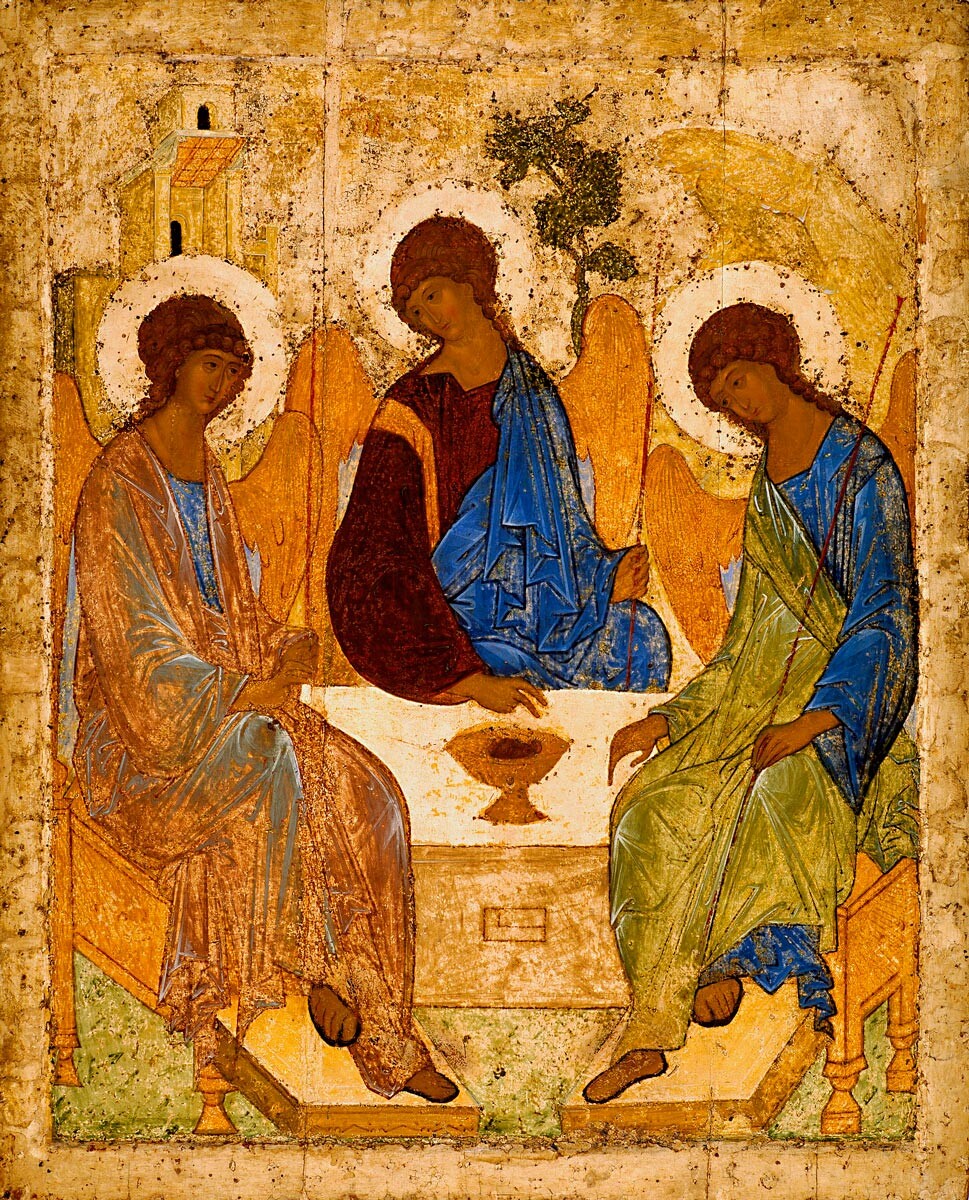 In Russian we call it the Day of the Holy Trinity. Pentecost means that it’s celebrated on the 50th day after Easter (or the 8th Sunday after Easter). Accordingly, the holiday is marked on different dates each year. In 2022, it is on June 12, as Easter is celebrated on April 24. The Holy Trinity is one of the most worshiped images in Russia and the famous icon drawn by medieval icon painter Andrei Rublev is one of the most widely known across Russia.

The Sunday before Easter commemorates Christ’s triumphal entry into Jerusalem. In the liturgical books of the Russian Orthodox Church the week before Easter is called the Week of Flowers. And, while in the West it’s Palm Sunday, in Russia, it’s Verb Sunday. As there are no palm trees in most of Russia, branches of it were replaced by most common verba that have nice buds. So, a bunch of pussy willows usually decorates the houses of Russians. 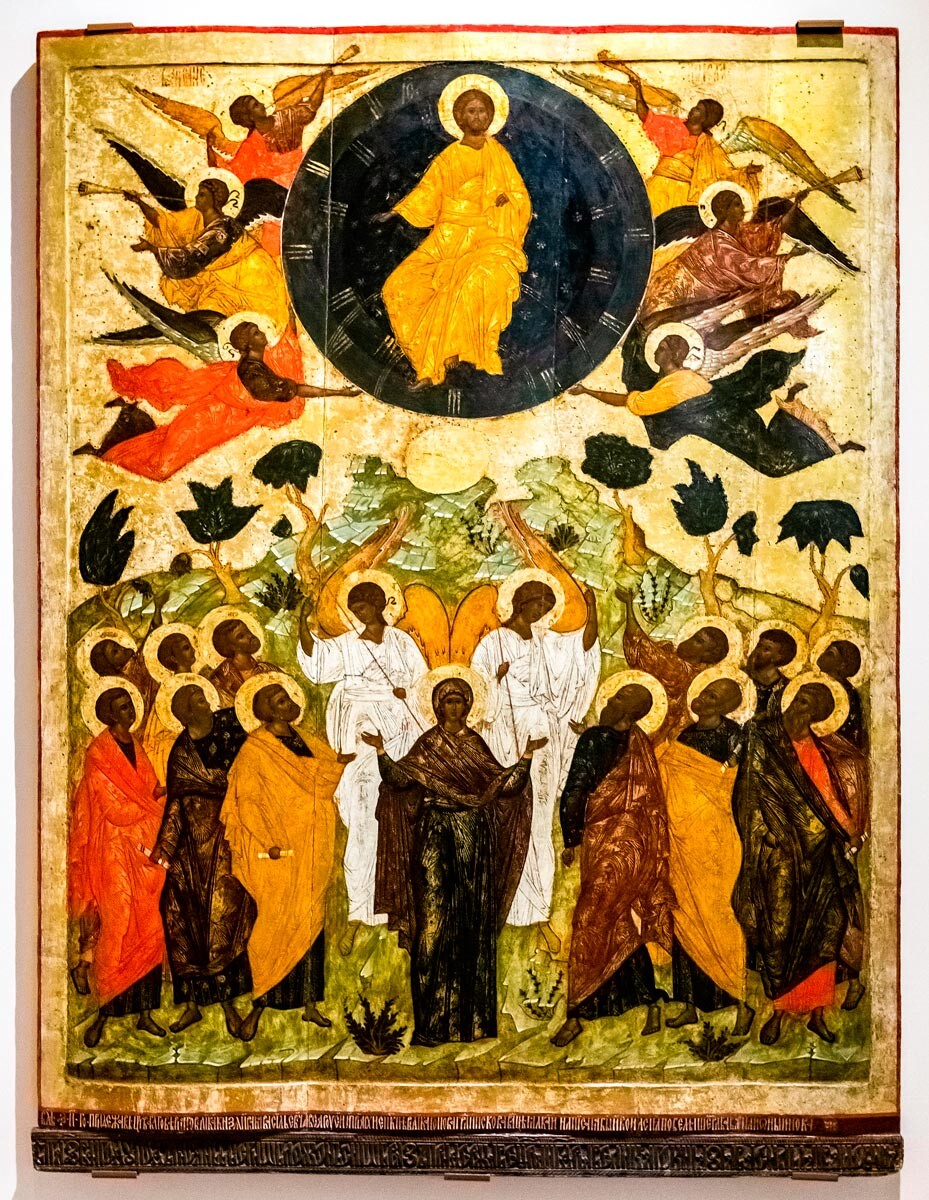 The Ascension icon from Veliky Novgorod, 1542

Forty days after the Christ Resurrection, He physically departed from Earth by rising to Heaven. This day is always celebrated on the 40th day after Easter. Despite this holiday being considered as more important by church officials, Russians like to celebrate Sunday after Easter. The folk name of this holiday is ‘Krasnaya Gorka’ (‘Red Mountain’) and it marks Christ’s appearance to the apostle Thomas on the eighth day after his resurrection. Russians usually visit cemeteries with relatives’ graves, leaving Easter cakes and eggs that have remained after the holiday.

The feast of Transfiguration marks the time when the apostles Peter, James and John were praying on a mountain and Christ appeared next to them and talked to them. This holiday is celebrated on August 19 and, in Russian folk tradition, it is called ‘Apple Feast of the Savior’ (or just ‘Apple Feast’). It was usually the first day when apples could be harvested and eaten and Slavic peasants used to arrange big celebrations.

12. Dormition of the Mother of God 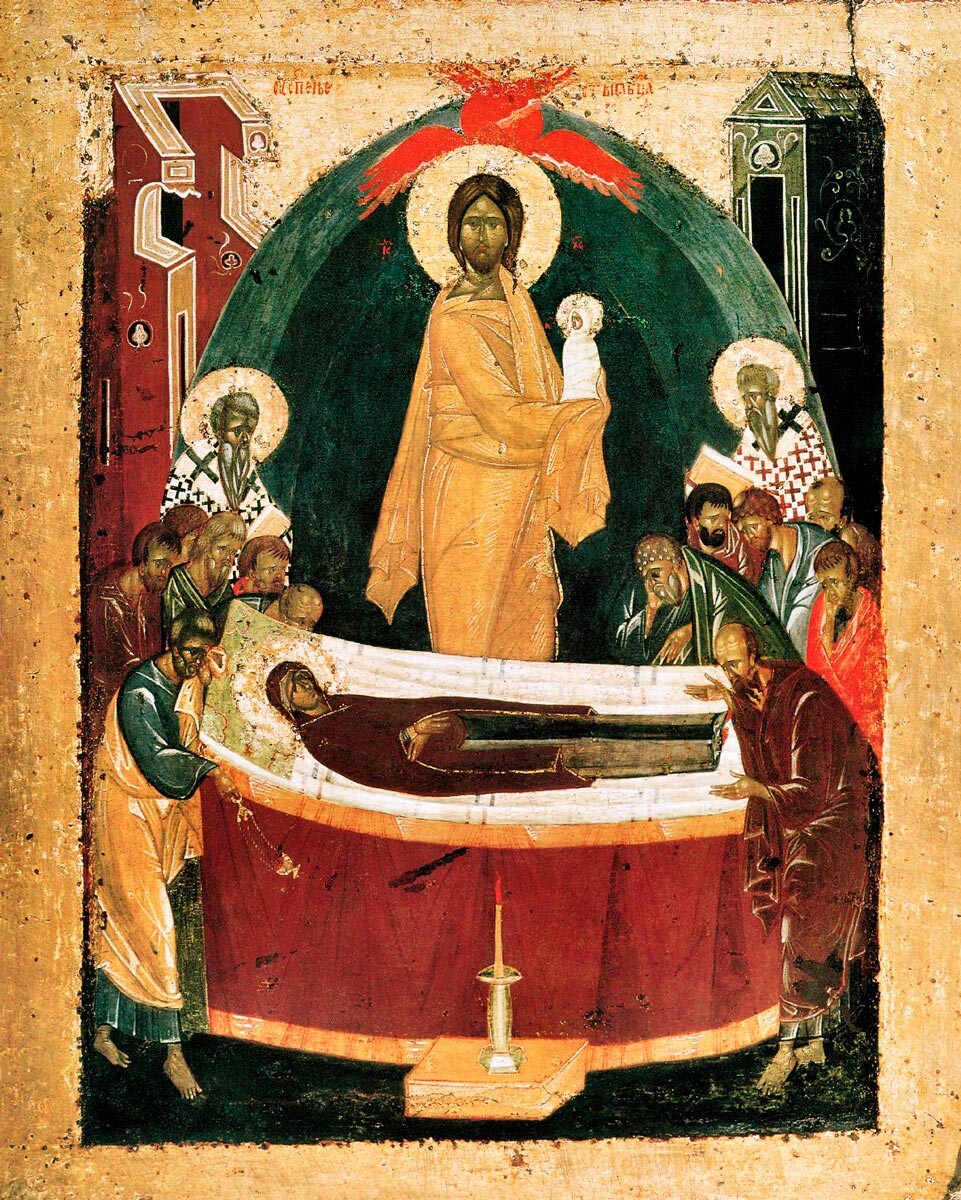 Theophanes the Greek. The Repose of the Virgin Mary, 1392

On August 28, the Russian Orthodox Church celebrates the dormition of Mary the Theotokos. This isn’t a sad event, because Christians believe that Mary passed away very peacefully, without any suffering. Very often, cathedrals and monasteries are named in honor of this remarkable event. Russian icons usually feature all the apostles gathered for the farewell and burial ceremony and Christ holding Mary’s soul. However, the Russian Orthodox Church doesn’t celebrate the Assumption of Mary, as the Catholics do.