10 mouth-watering treats to try at a Russian market 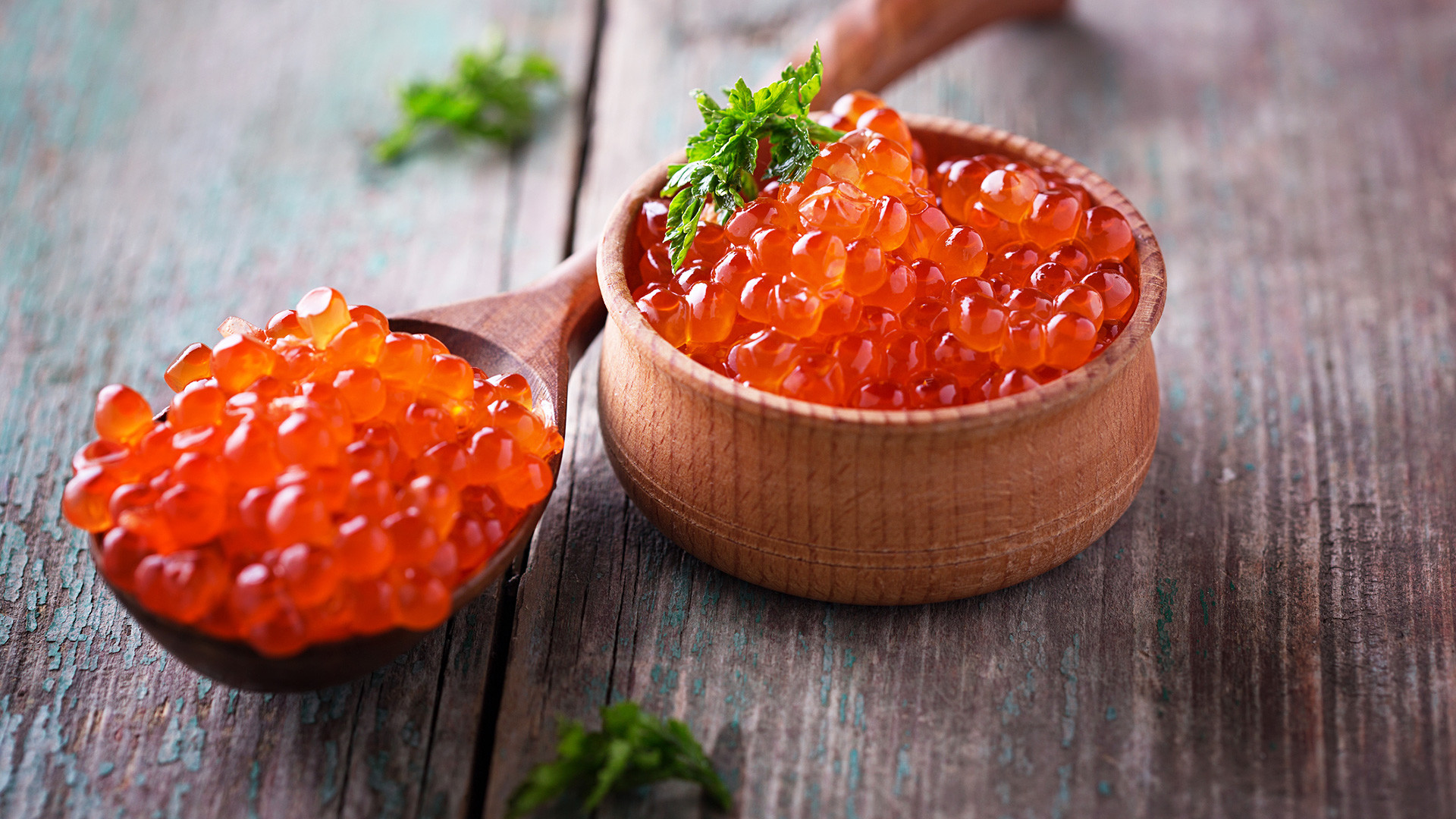 Legion Media
A Russian rynok - farmers’ market - is an island of color, diversity and cutthroat bargain hunting. Overwhelmed yet? Let us give you a hand. 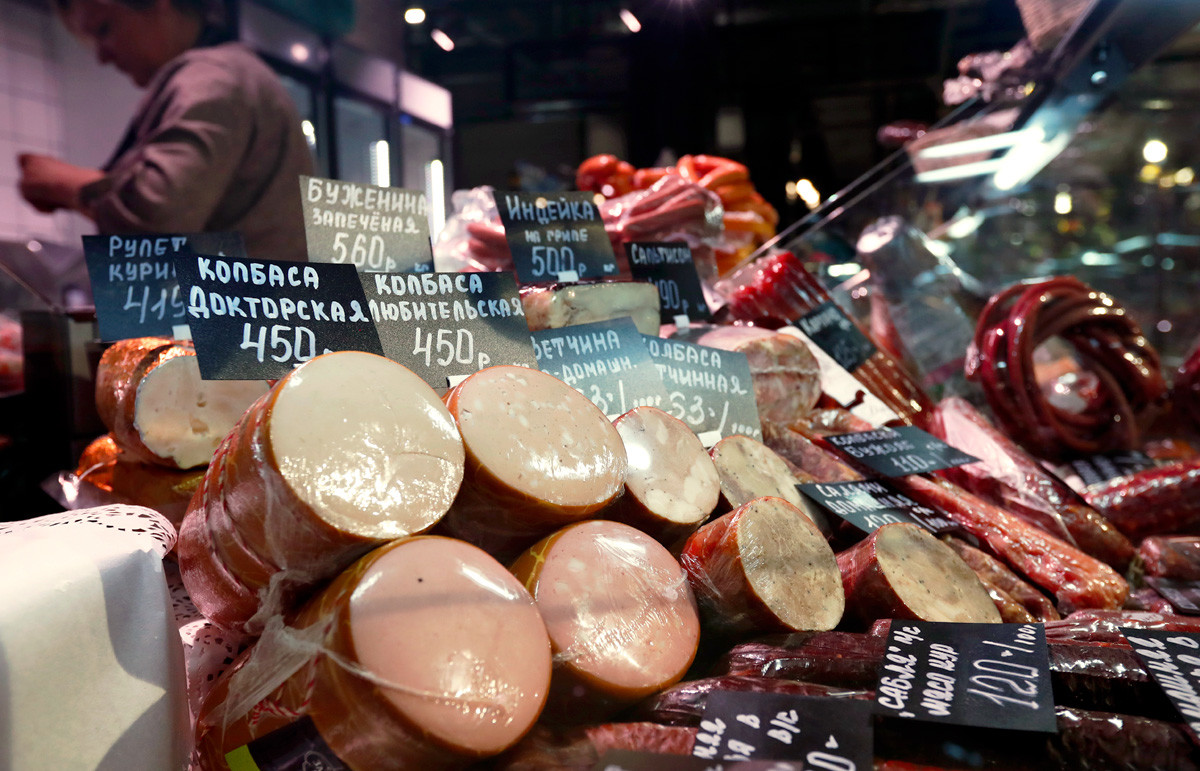 Sausage products on sale at the Tsentralny [Central] market in Moscow's Rozhdestvensky Boulevard.

Russian pork products come in varying degrees of extremity. Russian sausages (kolbasa) are usually smoked to perfection, and have a tough, rigid texture. Sausages come in their most diverse forms at markets, where they’re often transported straight from the farm.

If you’re feeling a little braver, try salo – a salty, spiced slab of fat that sometimes has the appearance of a piece of fat bacon. Alas, bacon it is not, but it goes great with vodka or borscht, and is a staple of both Russian and Ukrainian cuisine. 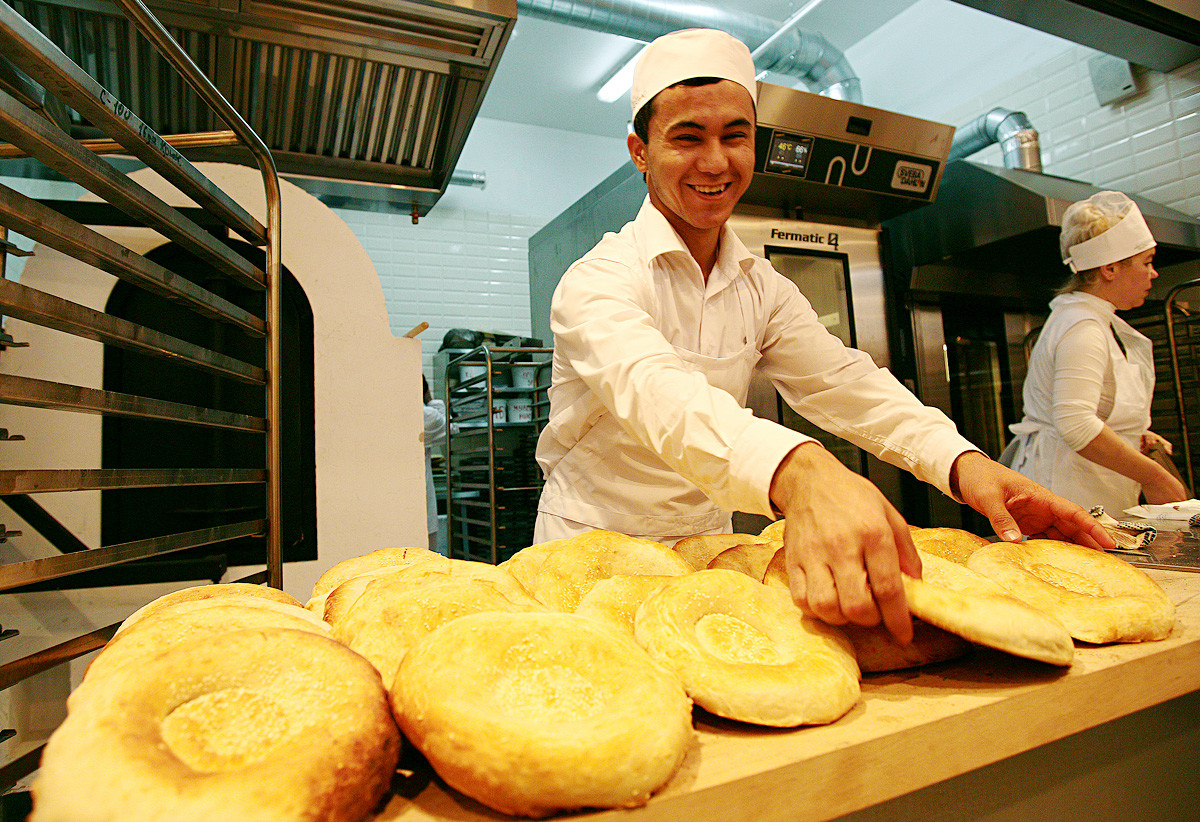 This Caucasian bread is one of a kind – it’s not a tortilla, nor is it quite a flatbread. Light, crispy, and dry, it can more or less complement anything: vegetables, hummus, barbecued meat, you name it. When warm, it also tastes great on its own – get it at an indoor market, where it is often cooked in a stone fire oven. 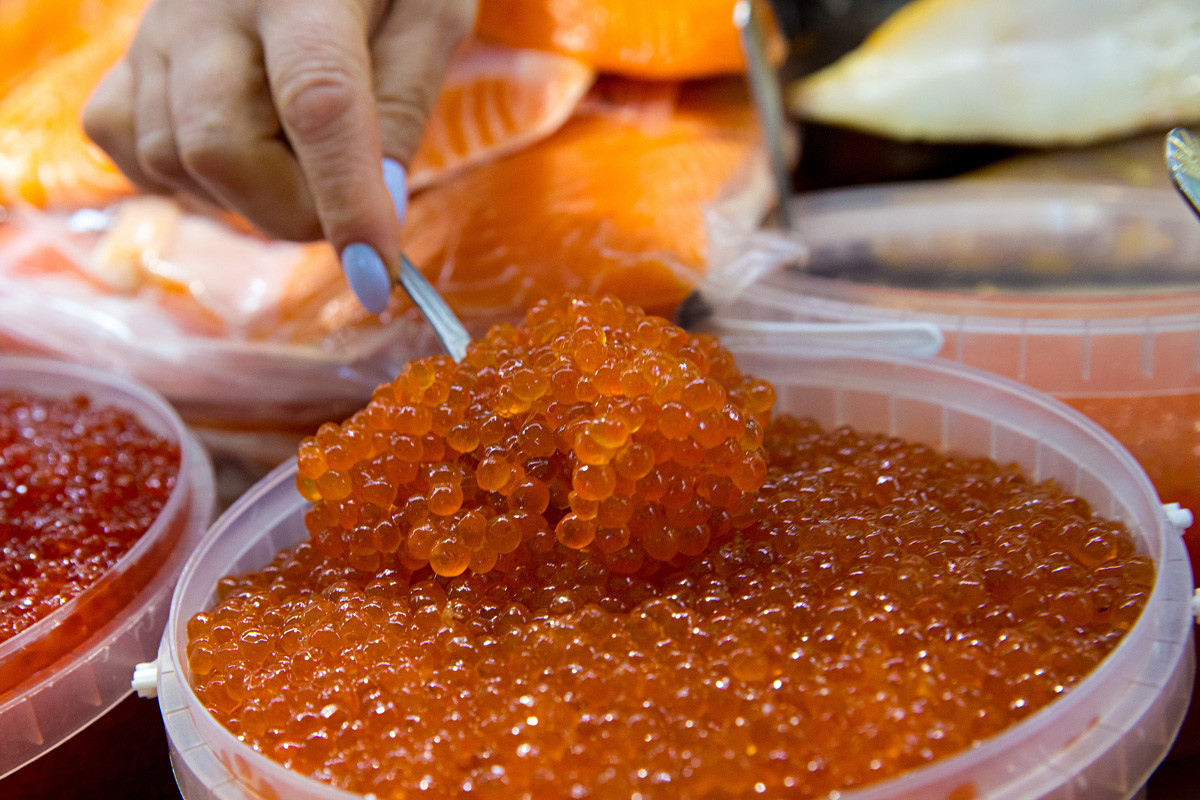 Caviar on sale at Moscow’s Danilovsky market at 74 Mytnaya Street.

One of the country’s most symbolic foods is best known abroad as a luxury dish. While expensive black caviar can also be found in Russia, it can come as a surprise to foreigners to see locals munching on the red stuff on top of snack dishes like pancakes, or even just white bread and butter. Caviar roe from markets are bigger and usually slightly less salty. 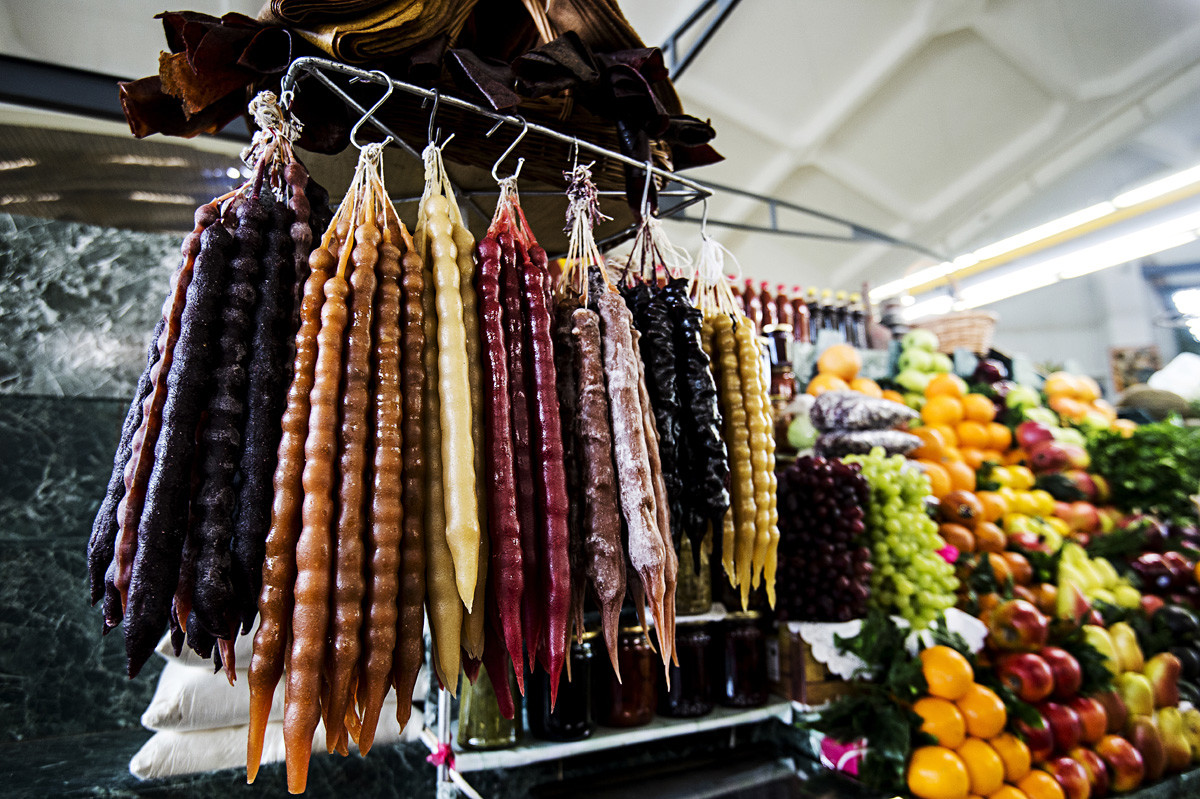 Products on display in the vegetables department at the Dorogomilovsky market in Moscow.

This Georgian candle-shaped candy is as natural as dessert comes: it can be filled with anything from nuts to fruits and chocolates, while the splendid coating is simply formed by dried grape juice. Best tried fresh and homemade, this colorful delicacy is unmissable in a market, usually seen hanging up to dry. 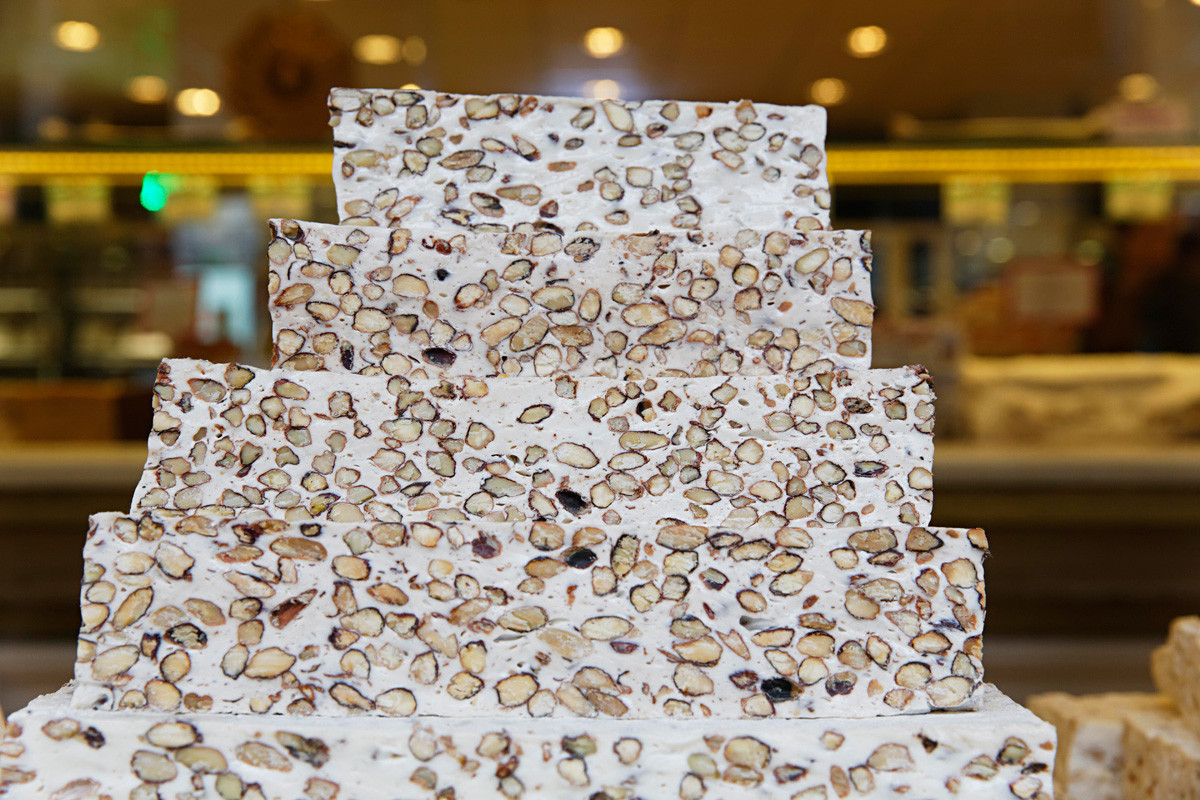 This sweet treat is believed to have originated in the Middle East and can be bought in almost any shop in Russia – the dry mashed sesame mix is known for its completely unique texture, and is a mainstay of any Russian dessert table.

Market-bought halva, however, is a different story: traders battle it out in the stalls to differentiate this traditionally uniform treat, and you’ll get marble-looking variations with chocolate, raspberry and all kinds of fruit infusions. Keep the seller on their toes, and they’ll be feeding you chocolate-bar sized samples in no time. 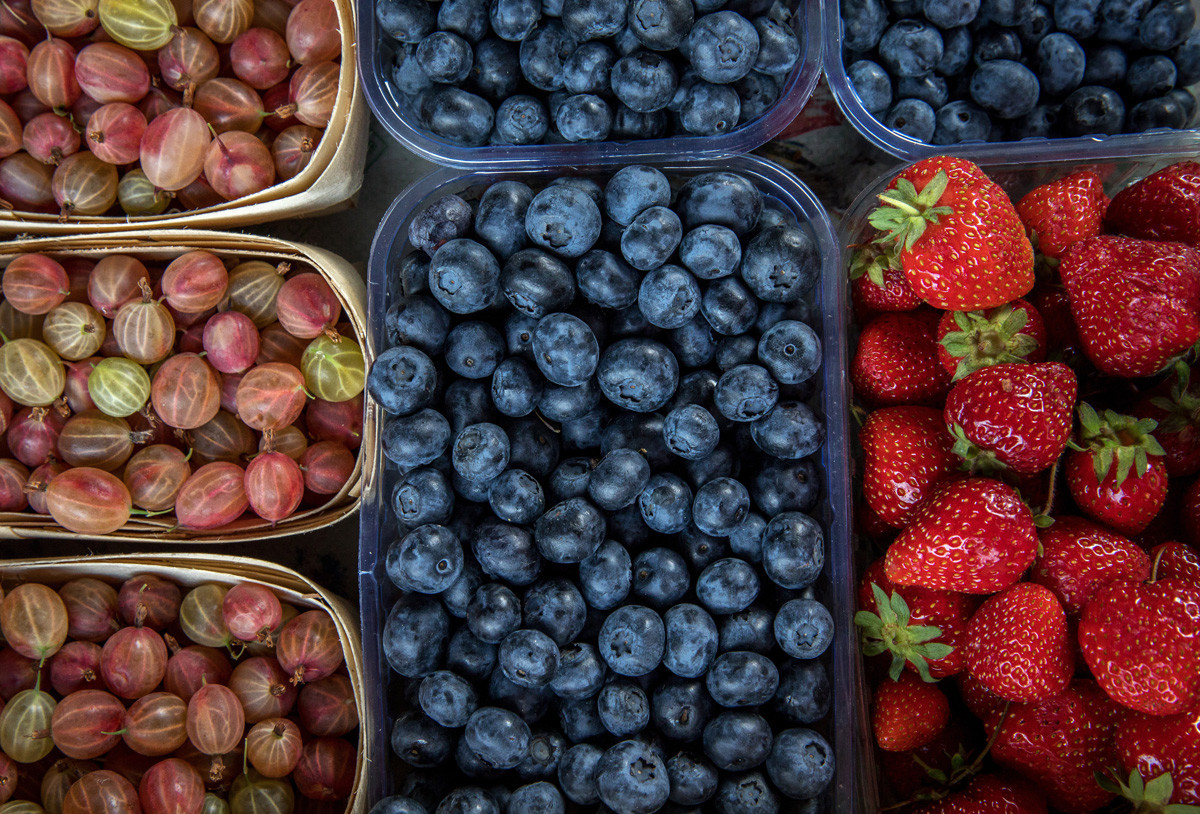 Selling berries at a market

Berries in Moscow are not exactly the city’s culinary forte: coming from the provinces, they usually don’t keep well in shops, yet can still cost up to $8 for a small punnet. That’s why you need to get them at a market, where deliveries come in fast and ready the same morning. While they’re still undeniably expensive, Russian market berries are some of the biggest, best and juiciest you’ll ever taste. For an occasional treat, it’s well worth forking out. 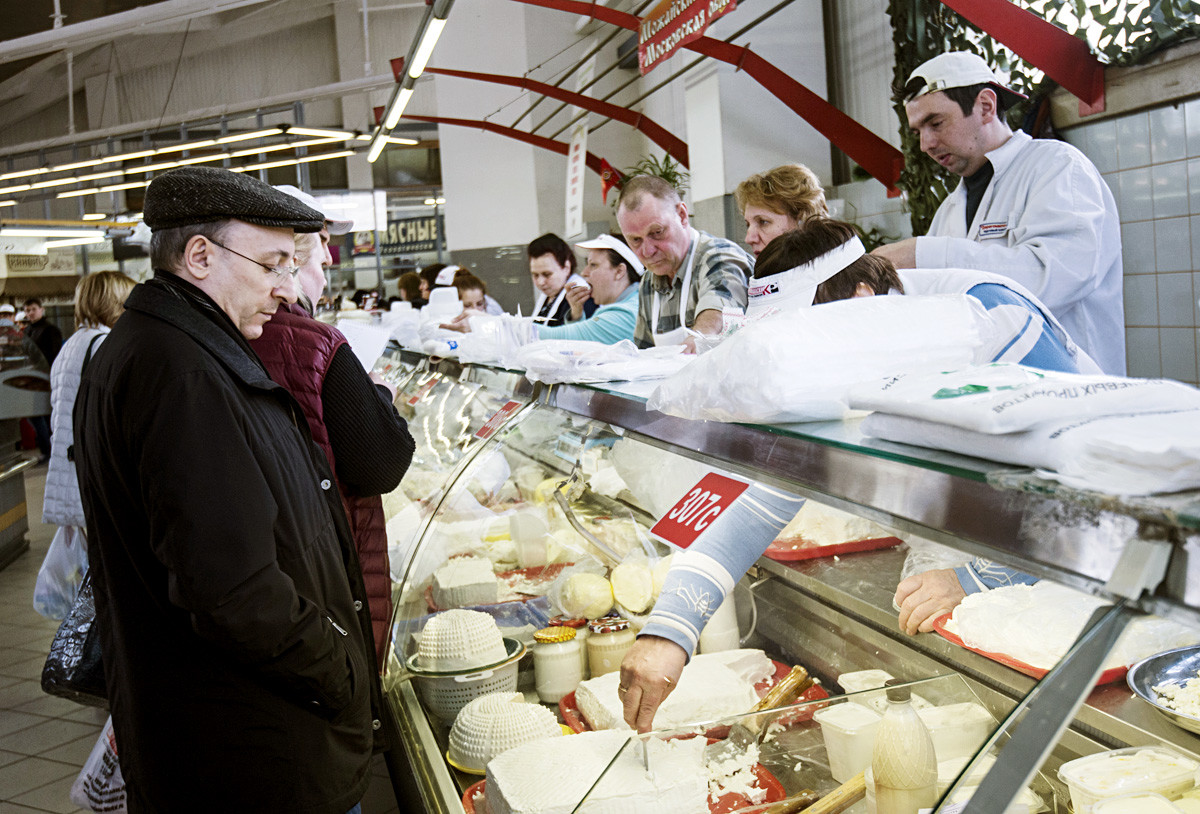 Customers and salespeople in the dairy department at the Dorogomilovsky market in Moscow.

This delicacy is in the same category as sour cream of “semi-strange dairy products Russians are obsessed with.” To be fair, it might be justified – the stuff is heavenly when served with jam and berries, and is the perfect post-workout meal. Unfortunately though, there is a lot of low-quality tvorog in shops here; to get the smoothest, creamiest stuff, get the real stuff by the tubful from the farmers.

Check out our complete guide to Russian dairy products here. 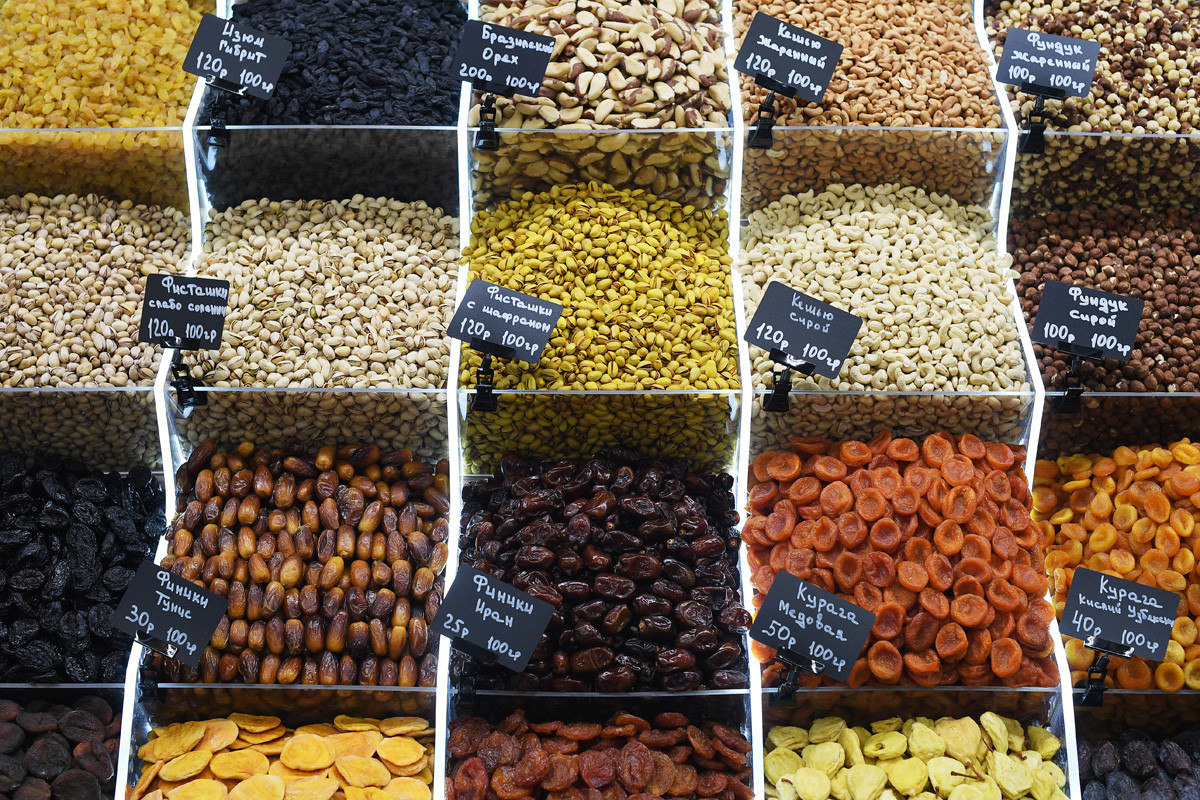 Products on the counters of Velozavodsky market in Moscow, which has recently reopened after renovation.

Perhaps the first thing you’ll notice upon entering a market is the ubiquitous colorful wall of dried fruits. They have literally everything here, from apricots and tangerines to more interesting products like figs and dates. With the combination of the flavors and the sellers’ persuasion, you’ll be returning home with kilos of dried fruits (there’s nothing you can do about it).

Yes OK, it’s a drink made out of black bread. It’s genuinely not that bad though (we promise). 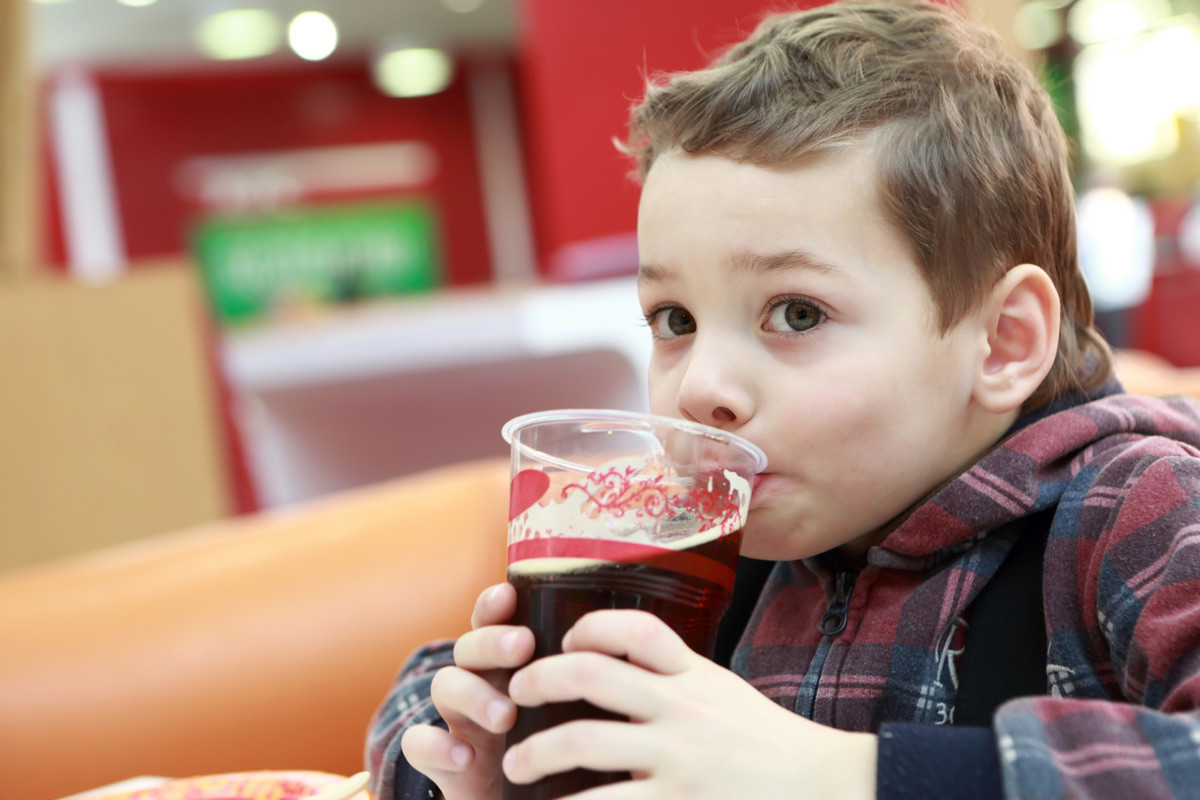 Probably best described taste-wise as something between beer and coke, kvas is the surprisingly refreshing summertime concoction people drink over here, and is as about Russian as Kalashnikovs and surly handshakes. Try it at a market for a liquid sample of dacha life. 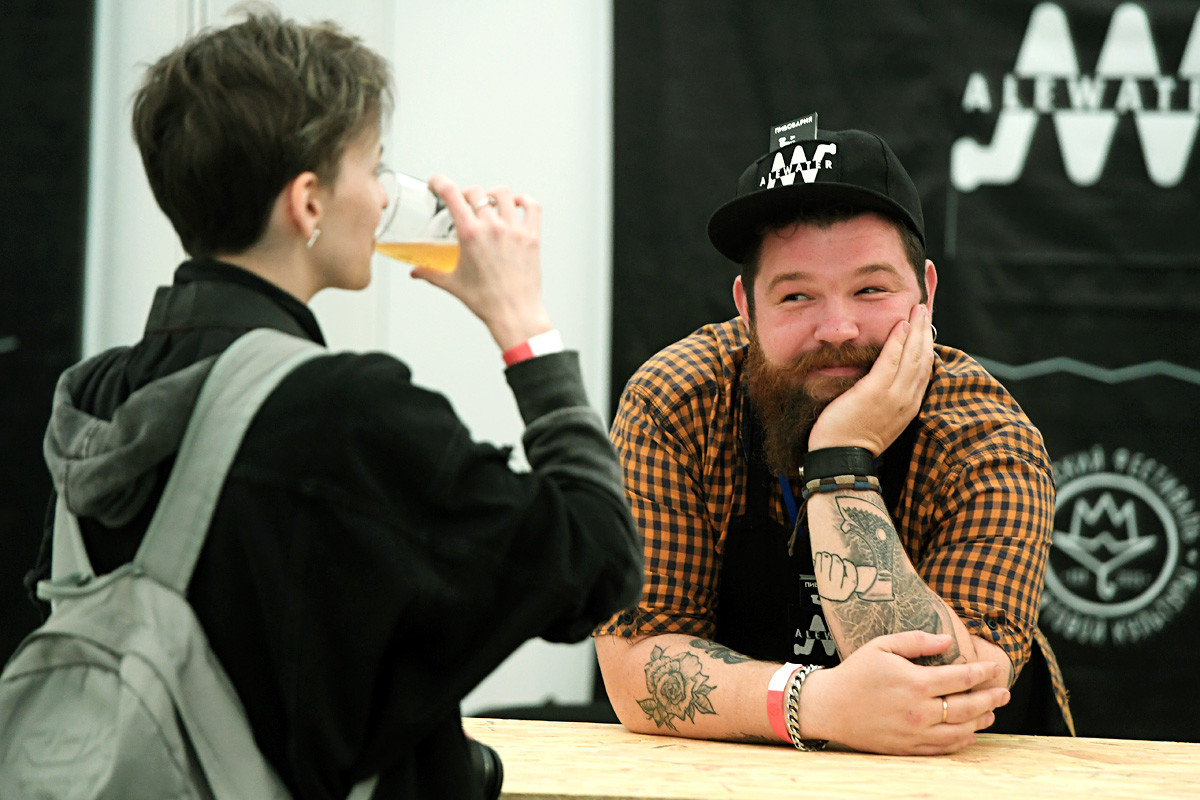 If you’ve tried the kvas and it just ain’t your thing, don’t worry, help is at hand. Some (but not all) markets will feature concessions by local brewers, so when you’ve finished your heavy-duty food shopping, you can quench your thirst with a craft Russian IPA.

Looking for a market in Moscow to try these delicious delicacies?  Check out our guide here.