Moon diaries: How does it feel to go 36 hours without sleep? 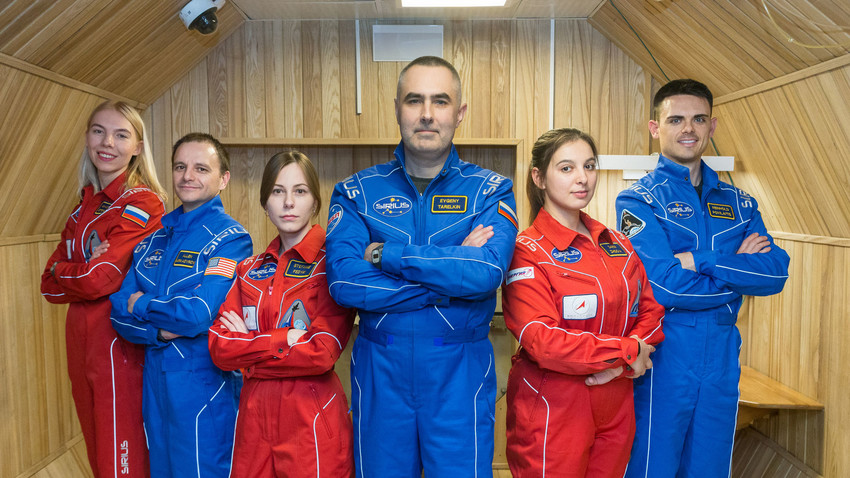 Press photo
Many of us have had situations where, because of flights, transfers, deadlines or exams, we’ve had to stay awake for 24 hours. As part of an isolation test experiment, Anastasia Stepanova and five other researchers had to stay awake in an “iron barrel” for 36 consecutive hours.

Two months after the start of the SIRIUS-19 isolation test experiment in May 2019, zero hour arrived for us researchers to “fly to the Moon” - right in the center of Moscow. It was also the day we had to undergo sleep deprivation. Scientists at the Institute of Biomedical Problems of the Russian Academy of Sciences (IPMP) reminded us with a sympathetic smile of this important part of the test experiment.

The point of sleep deprivation is to test the crew's performance, mood and wellbeing during 36 hours without sleep (the number of hours may vary). During these hours, we were to have lots of tests on our stress hormones as well as cognitive tests and take part in other research using psychophysiological techniques.

The morning began with us providing blood samples from a vein and a finger, as well as saliva and urine samples, undergoing ECG tests, having our blood pressure and pulse taken and doing cognitive tests. After breakfast, we did exercises and treadmill workouts. That continued till supper time. 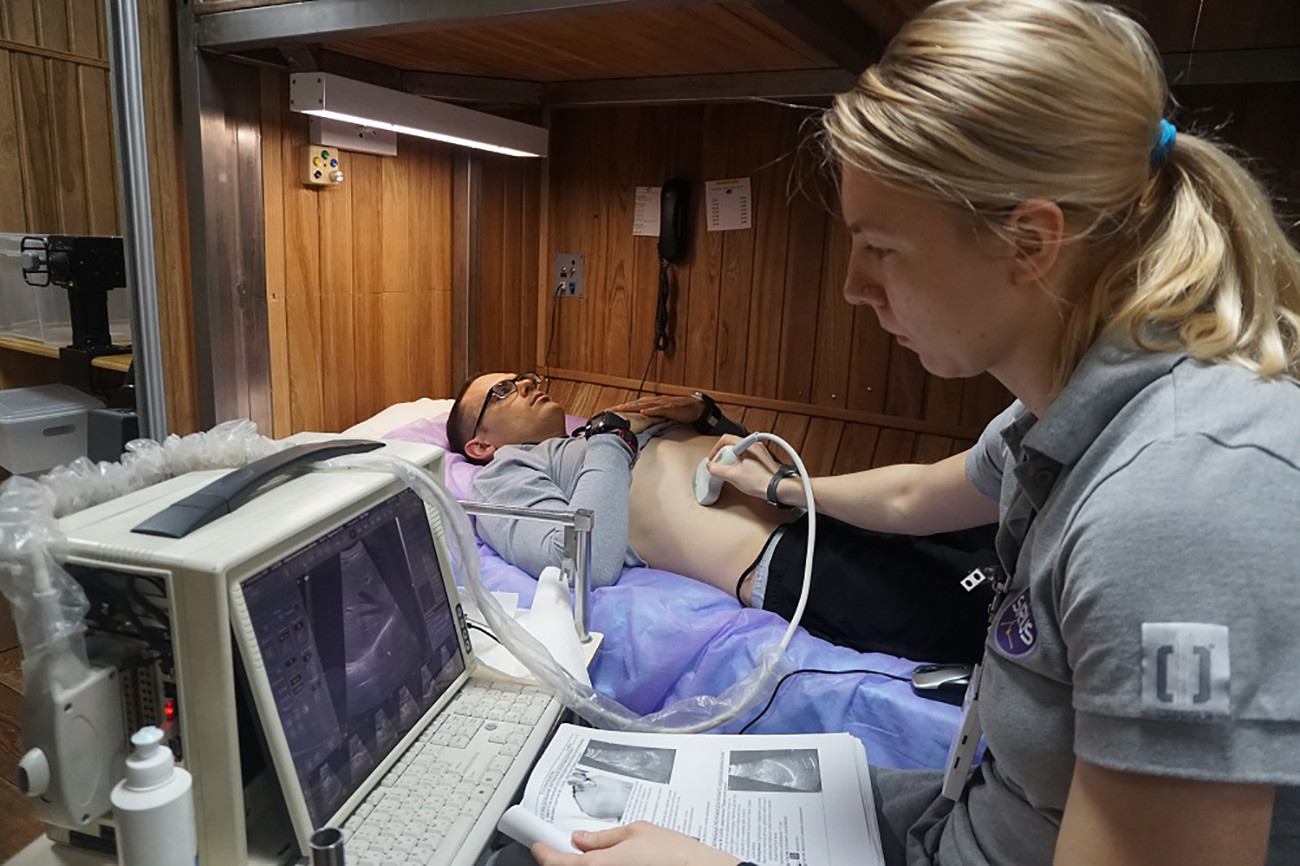 In the evening came the fun part: We had to put on a nasal cannula and about 12 sensors on our head, neck, chest, legs and fingers. It was the start of a 16-hour monitoring of the physiological data of our cardiorespiratory system during sleep and awake, using the portable SOMNOtouch Resp (Polygraphy) device. Usually, we start the procedure before going to bed but, on that day, everything was different.

We had to stay awake and carry out experiments while attached to the sensors and wires that kept slipping off and catching on nearby objects. At some point, when going past a mirror, I was surprised by my own reflection - all entangled in wires, I felt like a visitor from another planet. 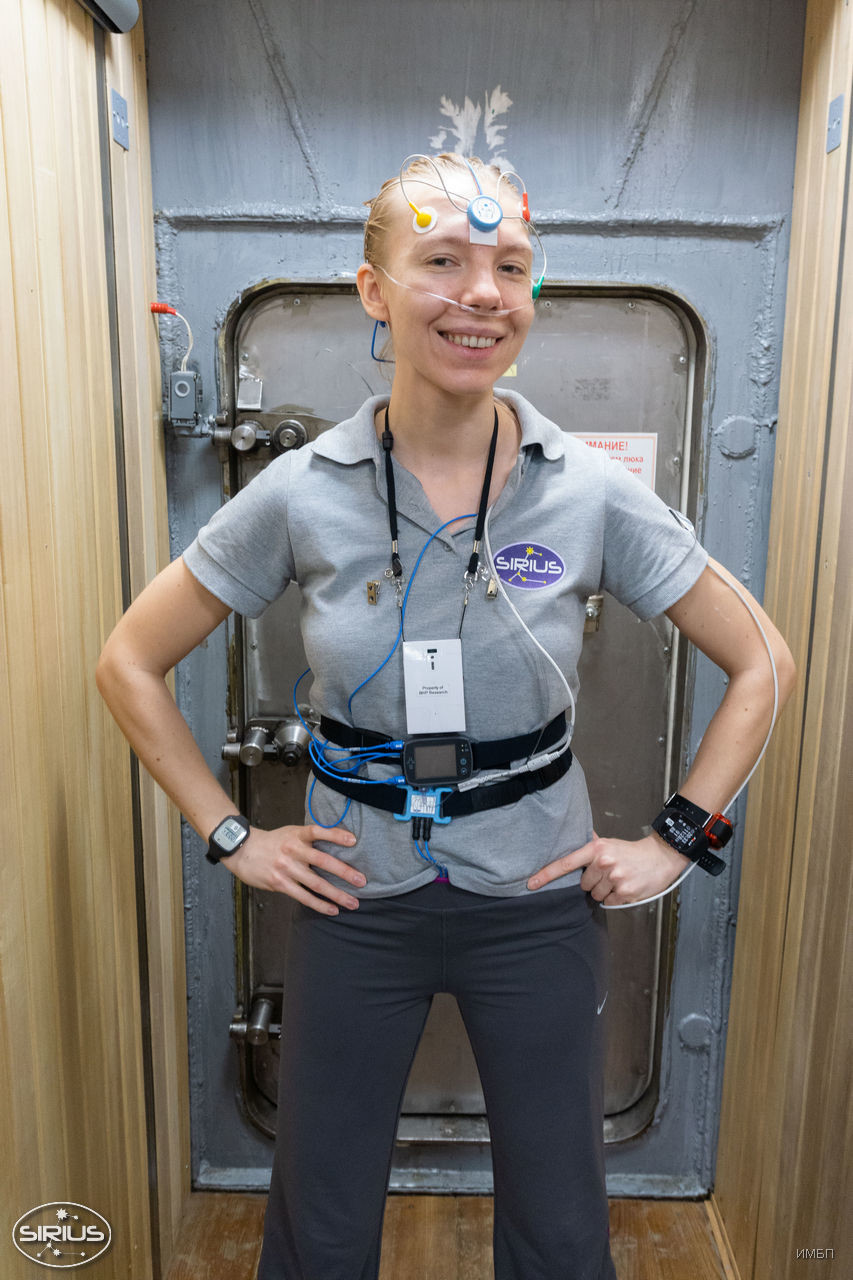 At midnight, a supply craft with food, additional equipment and parcels from relatives on Earth “docked” with the station. The unloading took several hours, followed by some of the researchers driving a mock lunar rover or performing virtual dockings with the spacecraft.

There was a great temptation to have a nap during a free window in the schedule (between four and six o'clock in the morning). But I resisted and decided that physical activity would help pass the time better. Together with flight engineer Daria Zhidova we began to sort out the delivered cargo, arranging everything onto shelves and entering the items in the database. All this took place to the accompaniment of music and dancing, which helped keep us in an excellent mood. As a result, the time passed quickly. 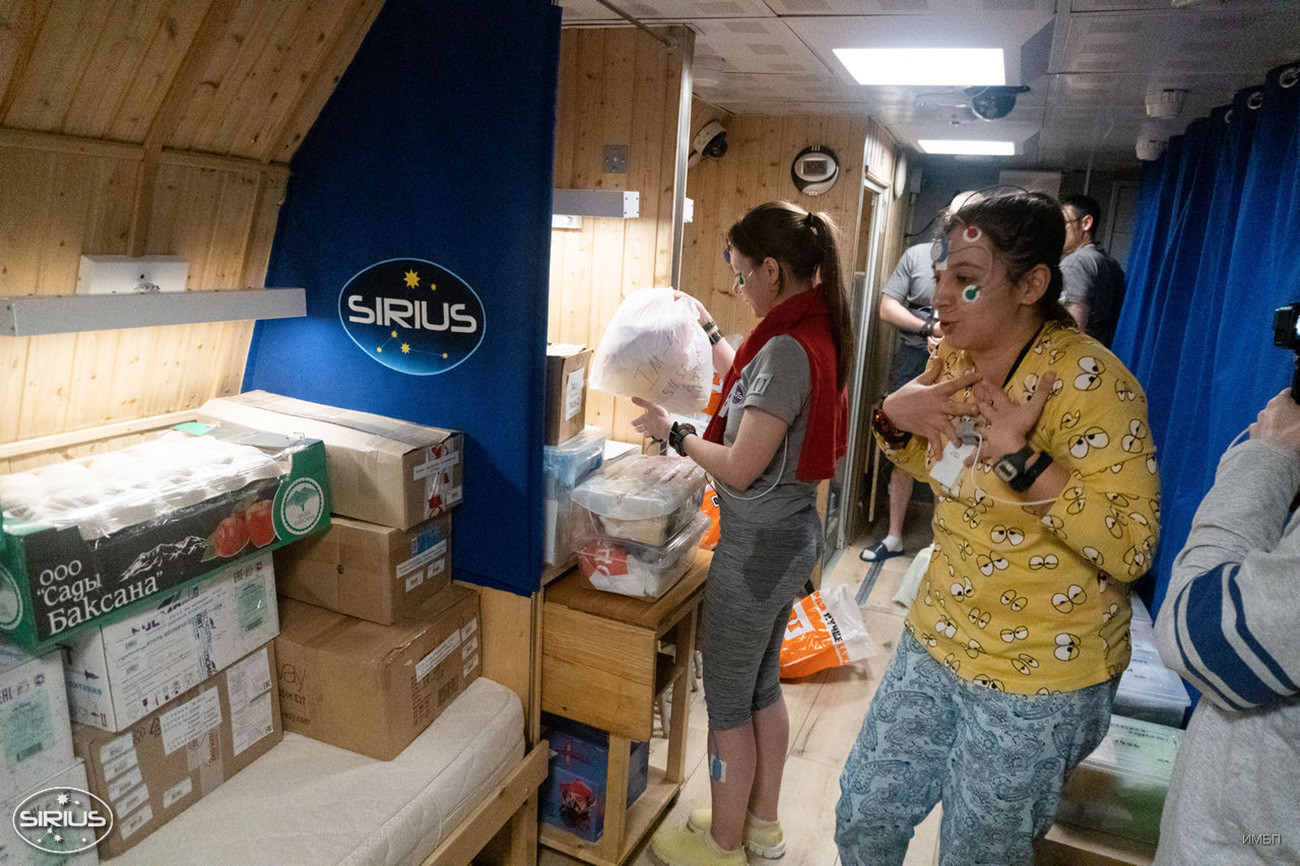 At 6 am, we started on the American procedures - monotonous cognitive tests where you have to keep pressing the same button for 10 minutes. At some point I dozed off. It seemed I had slept for ages but, according to the clock, it was only two seconds. It didn't happen again, but it was a strange feeling. Overall, the test was repeated seven times during the whole sleep deprivation period. An excellent test of patience. 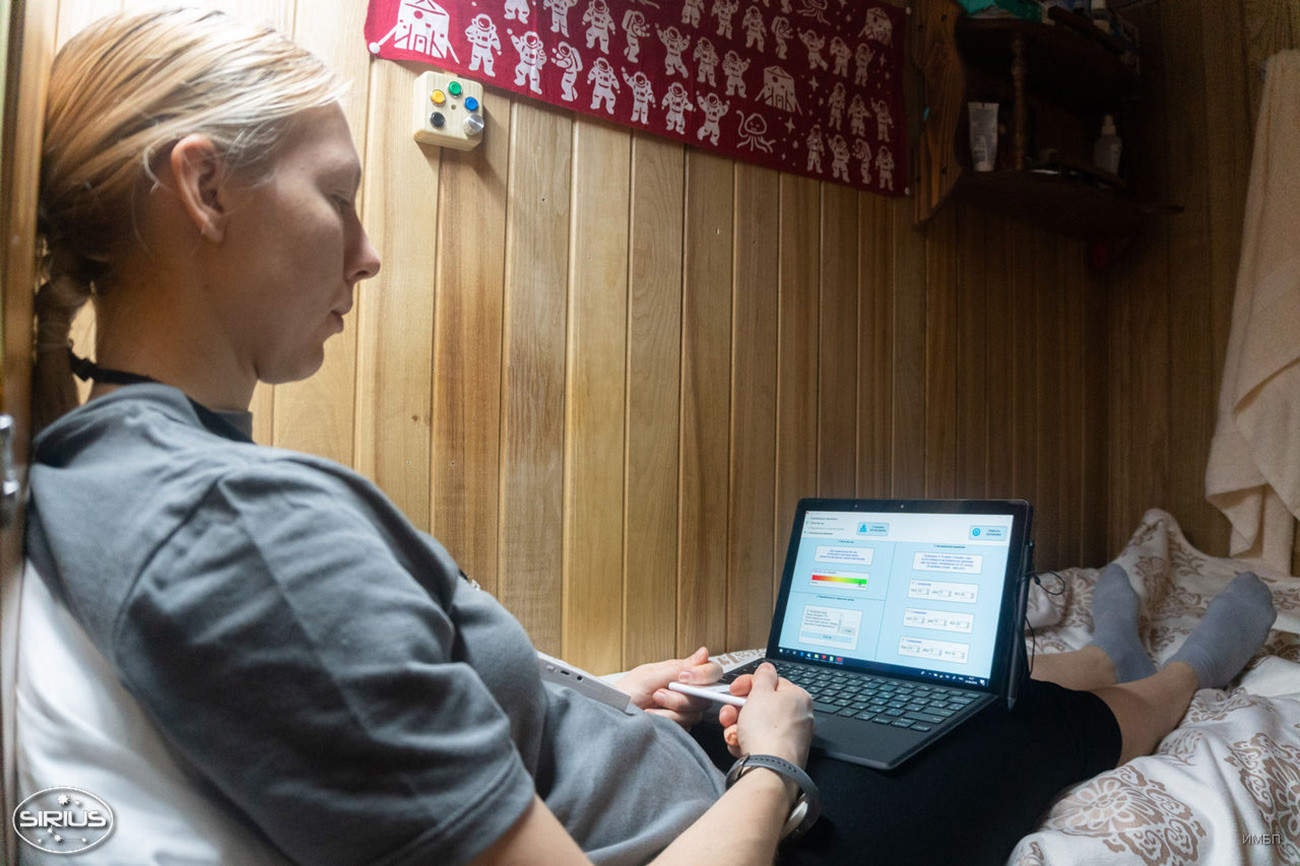 After 6 am, we had to provide blood, saliva and urine samples again. Finally, the time came for our long-awaited breakfast. Despite the fact that at night you usually don’t want to eat, we were starving after our constant physical and mental activity. Between 10 pm and 8 am, snacks were not allowed, as they could have affected the test results. During the entire 36 hours, we were not allowed to have drinks containing caffeine, so we couldn't wait for the following day when coffee was included in the breakfast menu! 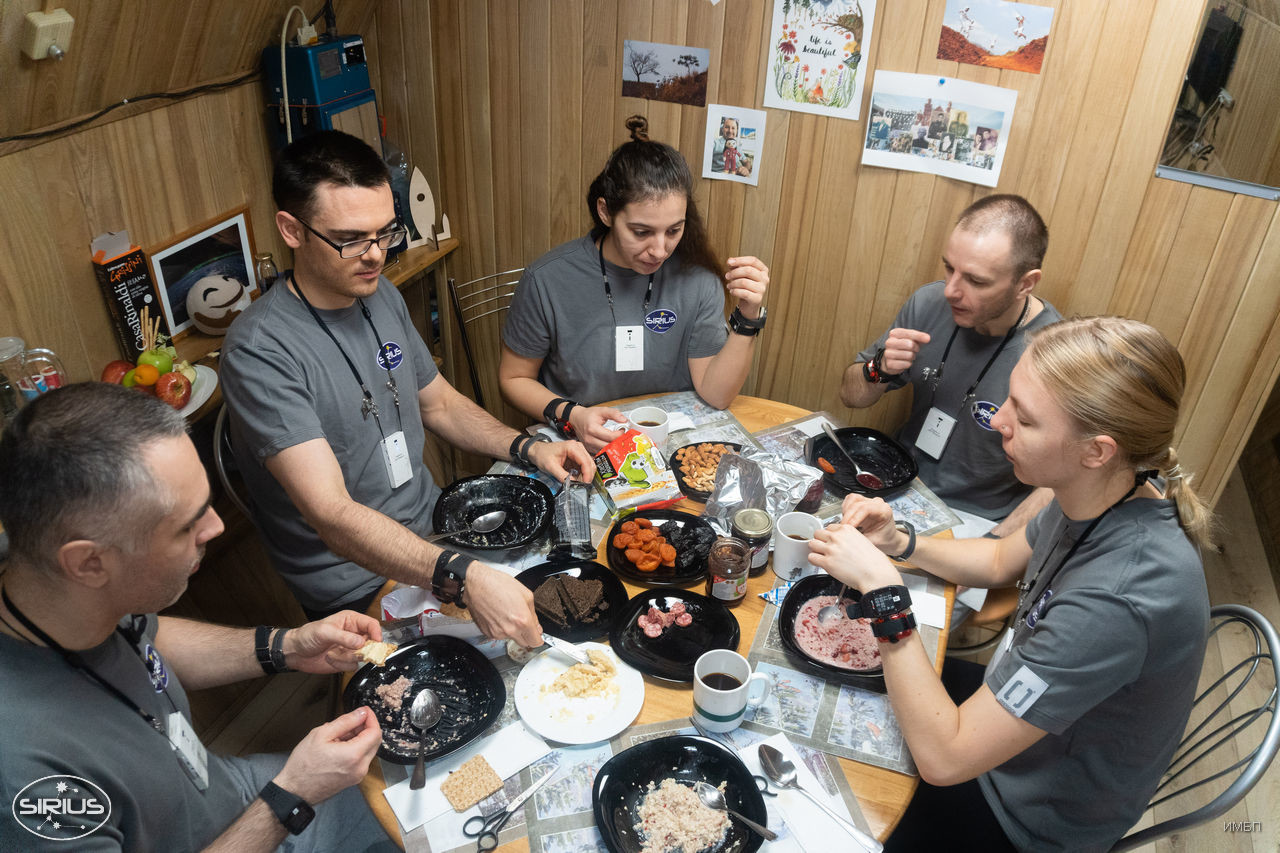 After that, the program included some German procedures during which you had to put on an EEG cap with a large amount of gel, solve equations and respond to either cute or disgusting and cruel photographs. 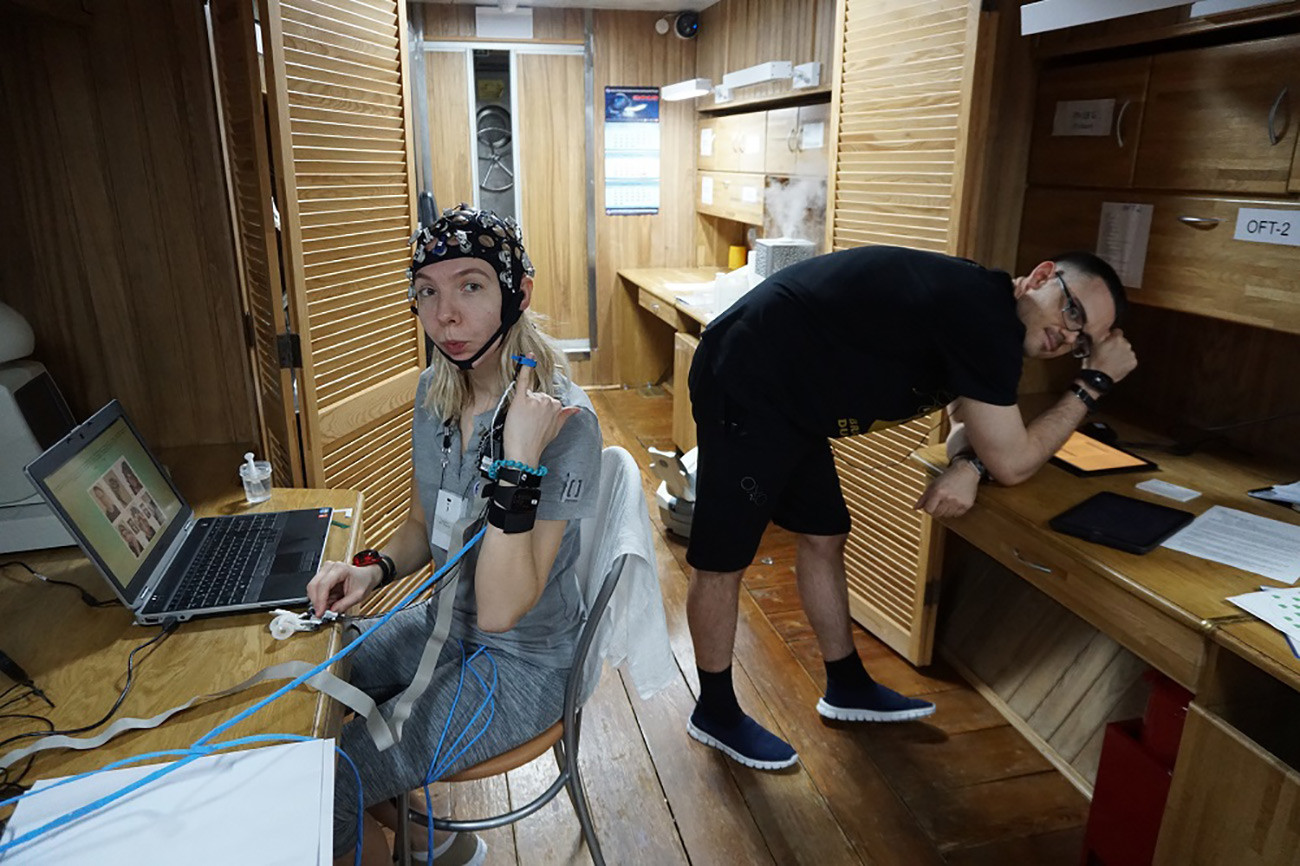 And that was followed by more running. Despite the fact that training on a treadmill was not included in my activity program and only the commander, flight engineer and researcher No. 1 had to do it, I also decided to test my endurance and see how a sleepless night might affect the quality of my running. Moreover, the prize for the whole experiment was a shower (which, as a rule, we were only allowed to take once every 10 days). In the end, we all ran the same as before. 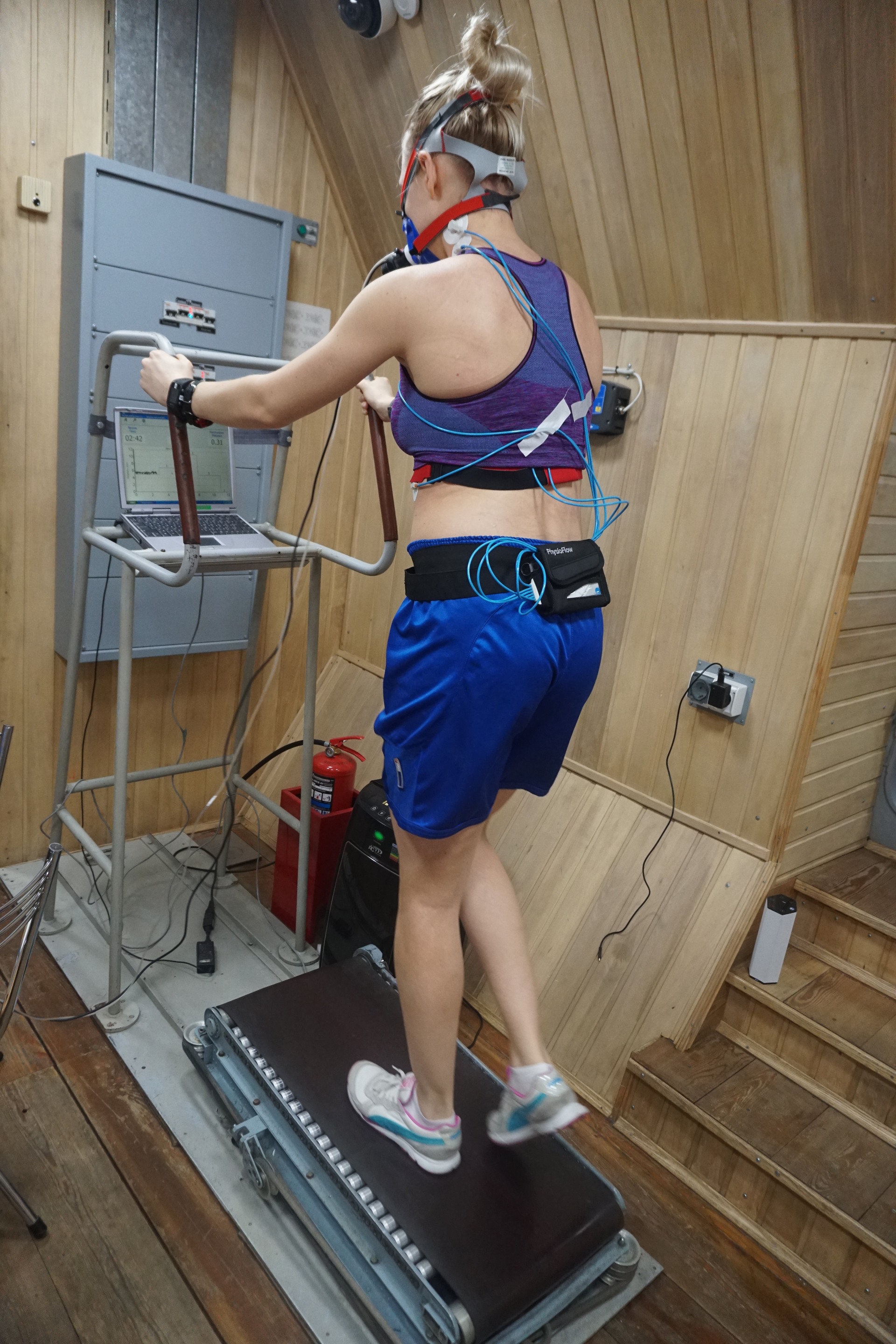 The second sleep deprivation test was at the beginning of the fourth month of our isolation. This time, there was no supply craft to unload at night but, once again, we had to wear a nasal cannula and 12 sensors covering our whole body, and provide blood, urine and saliva samples. 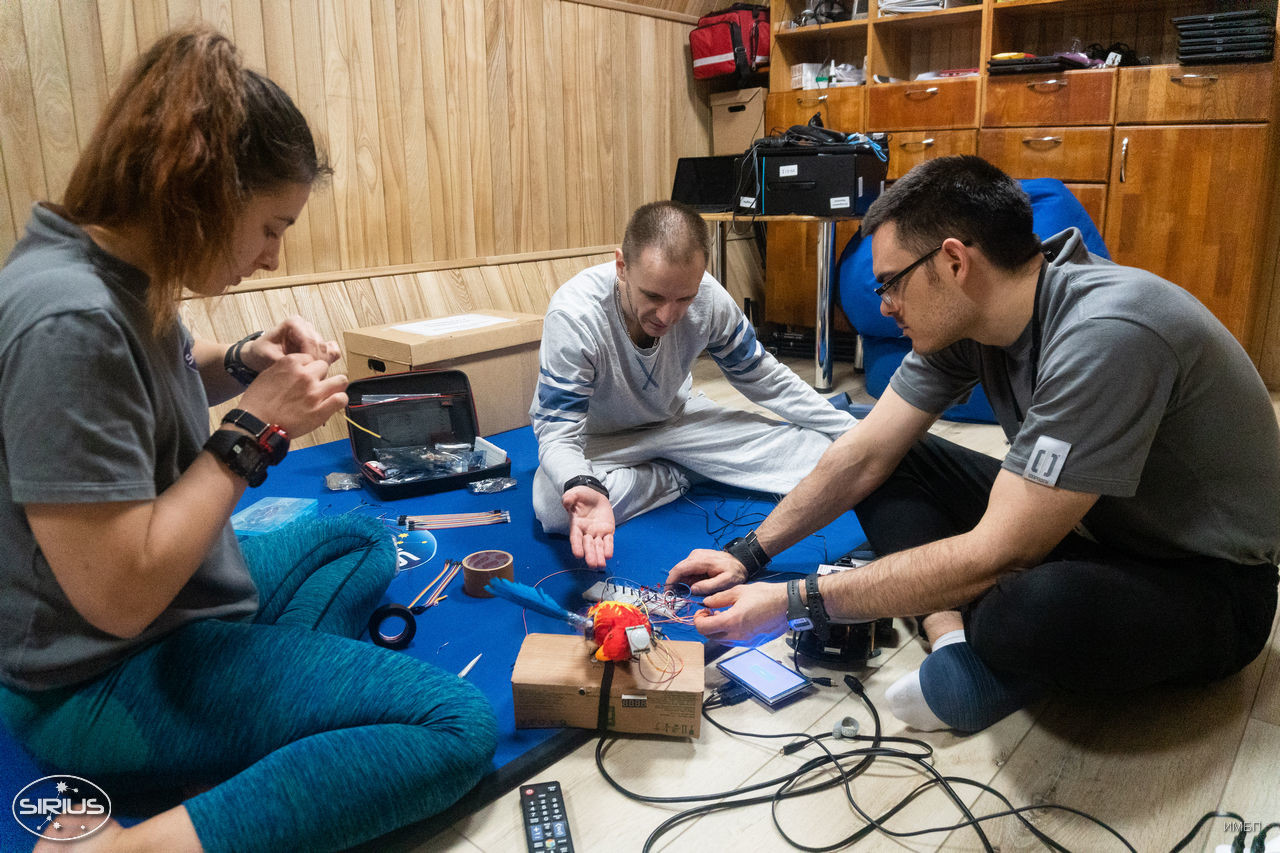 During this sleep deprivation, the scientists wanted to monitor us as we performed monotonous tasks and to provoke a reaction to stress. The psychologists tried to provoke a reaction in us by deliberately addressing each crew member with some complaint, pointing out our mistakes and shabby appearance. But since the test took place during our 30th hour without sleep, nothing could hurt our feelings anymore. Asked “Why do you look so shabby?” I was not surprised or offended, and just replied, with a laugh, “probably because I haven't slept for a long time,” while thinking to myself, “Hello, Captain Obvious!”

A human being is a hardy creature, and in the end, 36 hours without sleep was not a difficult ordeal. I had found it much more difficult to make a respectable showing in the soundproof isolation chamber test for aspiring cosmonauts. A candidate had to stay in it for about three and a half days, all alone and in complete silence.

While inside, apart from the fact that you can't sleep, you have to perform easy tasks, mainly relating to cognitive psychology. For example, you have to write an essay on a given topic - after reading the essay, one can assess the mental stability of the candidate. 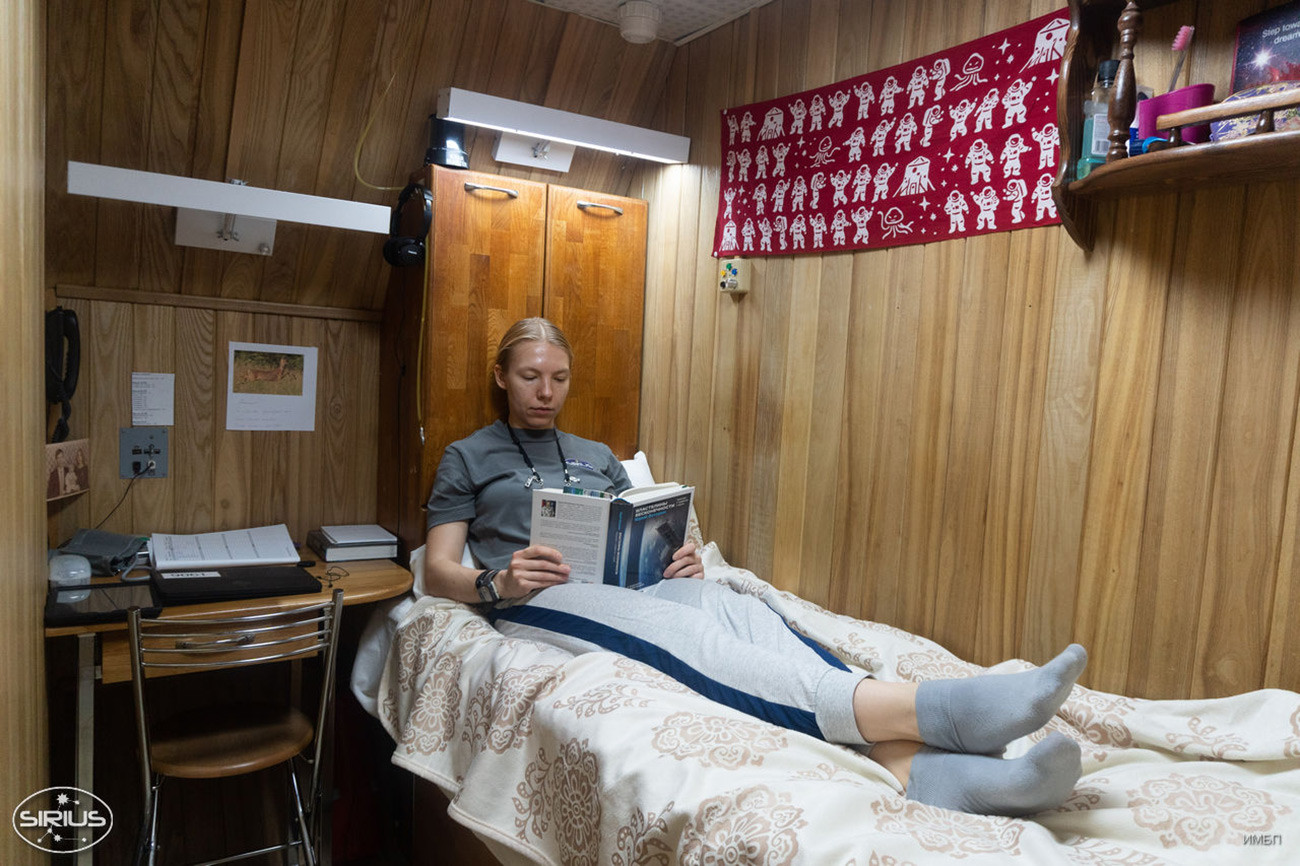 As a temptation, there is always a bed in the chamber, but you'd better not even sit on it. You are not allowed to sleep: As soon as you close your eyes, a lamp lights up and a piercing alarm goes off. Psychologists and doctors monitor your behaviour all the time and deliver their verdict at the end of the test experiment. 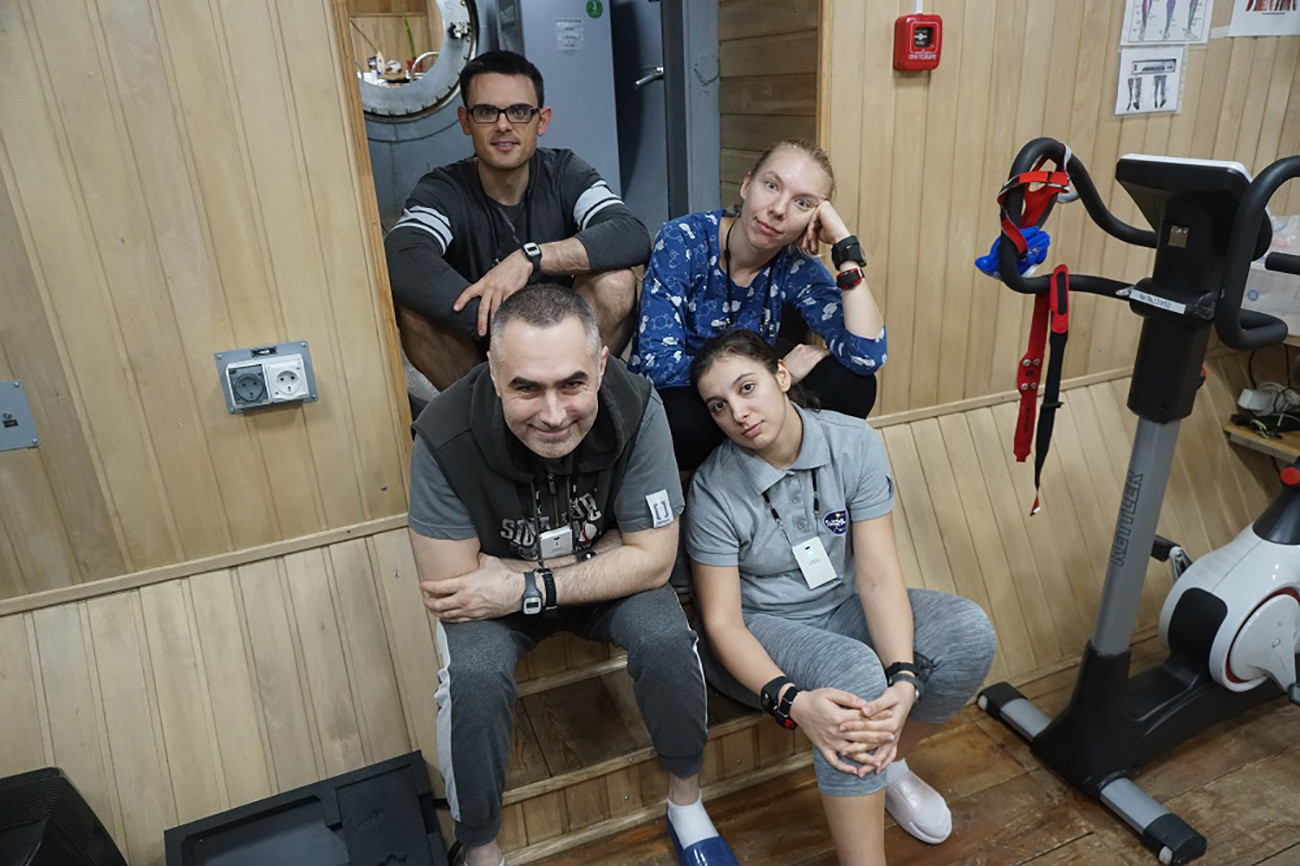 Many an aspiring cosmonaut has been eliminated at this stage - for example, because they started to talk to themselves or to brush off imaginary cockroaches. But during our test experiments, none of the SIRIUS crew members imagined seeing cockroaches or hearing voices, etc. The secret of a successful performance during sleepless nights lies inside us. 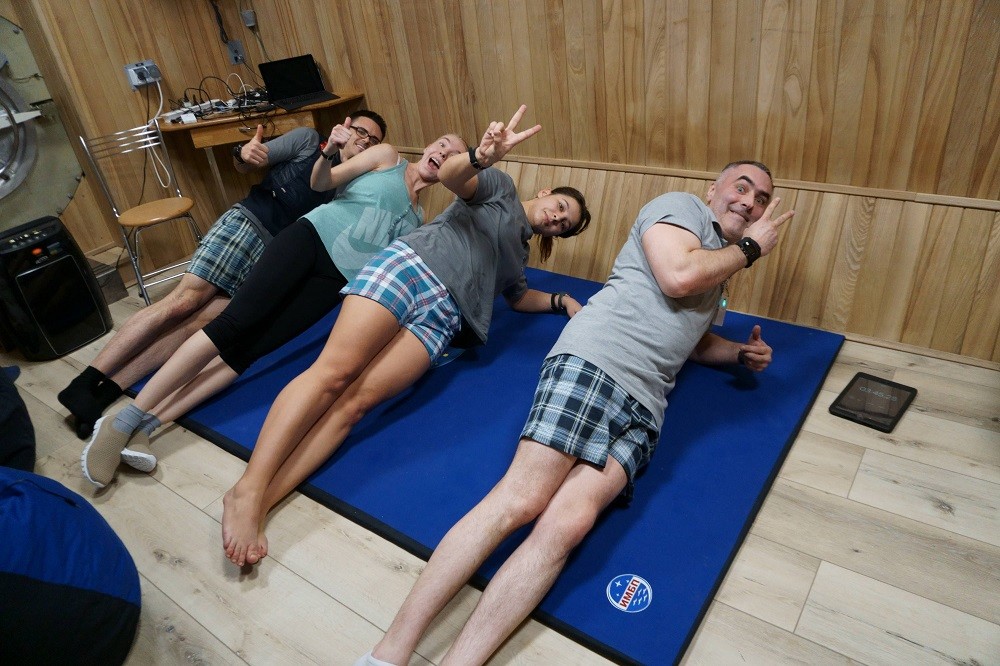 Six researchers, supporting one another and ready, at any moment, to come to one another’s assistance, to humor you or simply hear you out. The power that enables you to overcome many hours without sleep or food, subjected to constant mental and physical pressure, was always inside us.

Read other parts of the Moon Diaries: