A weekend in Yasnaya Polyana: A walk in Tolstoys footsteps 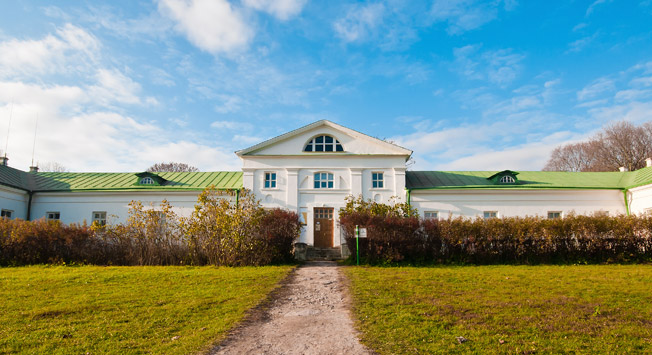 geophoto.ru
Autumn is the best time to enjoy the classic Russian landscapes and to become immersed in the author’s world, which has been carefully preserved by his descendants.

Get your morning off to a delicious start by sampling the local traditional breakfast of creamy curd pudding with naturally healing strawberry jam or some comforting, homely rice porridge. The cozy restaurant ‘Preshpekt’, which is situated in a wooden house opposite the entrance to the estate, is the perfect place to meet the locals and learn about the area first hand while you relax. The interior of ‘Preshpekt’ is adorned with woven fabrics and embroidery that complement the simple wooden interior.

As soon as you walk through the white columns at the entrance to the Estate, you become utterly absorbed by the green mass of Birches, Maples, Oaks, and of course Ash trees. Some say that the name of this location, Yasnaya Polyana is a shortened version of Yaseneva Polyana. There is also evidence the name is derived from the clear and pure Yasenko stream, which lies close to the estate.

To the left of the beautiful estate is a small pond, the surface of which is covered in the delicate and fragrant yellow flowers of water lilies. After a further stroll along the seemingly endless avenue leading to Tolstoy’s house, another detour to the left leads to the bathing pool where the author’s wife Sophia, and the author himself loved to bathe.

The grounds of the estate contain stables, the Volkonsky’s house as well as apple orchards on the left hand side, an enjoyable and tasty distraction on the long walk to the house. A small road leading away from the main avenue leads to the grave of Lev Tolstoy. The grave is next to a long ravine in a silent part of the Forest of the Old Order and is fully inscribed into the natural landscape, possibly echoing the writer’s views on life and death.

Returning to the road perpendicular to the main avenue you will pass the Kuzminsky’s house. Make sure you take the time to see how the beautiful façade intertwines with flowers and is fronted by beds.

Walk further down the avenue to Tolstoy’s house and admire the equestrian and feminine figurines carved into the balustrade on the terrace. Take another few steps and enter the door into the private world of Lev Tolstoy. The house has been left as it was in 1910 when the author died and is open to you, however photography inside is stricly forbidden. A guide will greet you in the first room, which is lined with bookcases. The house contains a total of 22,000 books, of which around 50% are in Russian and a little less than 39 foreign languages. A significant part of the book collection is in French, which Tolstoy studied particularly intently to aid in his preparation for writing the novel ‘War and Peace’.

The walls on the staircase decorated with many large English clocks. On the right is a room, which served as a dining and guest room. The plates on the table are those from which Tolstoy’s large family would eat. There are two portraits of Tolstoy on the walls: one by the hand of I.N. Kramskoy (a second such portrait is in the Tretyakov Gallery) and an additional portrait by I.E. Repin (the artist painted around 70 portraits of the author). Many other portraits can be seen depicting the author’s daughters and his wife. There are also two grand pianos in the room as well as chairs, which would make for social gatherings of adults and children after dinner.

You can visit Tolstoy’s bedroom in the museum, where a copy of Dostoyevsky’s ‘The Brothers Karamazov’ embellishes a simple table. This was the book he was reading up until 1910 when he abandoned Yasnaya Polyana. You can also visit Sophia Andreyevna’s room, and the nanny’s room among others. According to one account the author fled Yasnaya Polyana because of the exorbitant numbers of visitors and all the unwanted attention paid to him. The guide is full of interesting information such as the tragic tale of a letter Tolstoy wrote to his wife asking her not to think that he had gone because he had fallen out of love with her. Tolstoy wrote that he could live in luxury no longer. The guide will then show some items used in daily life, which the author could justifiably call luxurious as well as the room in which the coffin containing his body was placed in 1910.

You can walk at your leisure round the estate and the surrounding forest and its even possible to bathe in the large pond near the entrance.

Souvenirs can be purchased either in the ‘Preshpekt’ restaurant, or in the souvenir shop in ‘Yasnaya Polyana’ hotel. Prices vary. The assortment of books about Lev Tolstoy and his work include those produced by the publishing house ‘Yasnaya Polyana’, Uniquely available here. Tula gingerbread with condensed milk or jam along with a picture of the estate, (from 170 roubles) (that would be 3.33 GBP), or animals (140 roubles) (2.74 GBP) are popular souvenir choices. Widespread collectible and craft dolls are also sold, as well as musical toys and ceramic items with floral ornaments produced by sgraffito painting.

Take a relaxing stroll after dinner from ‘Yasnaya Polyana’ hotel to the opposite side to the estate. Just a ten-minute walk through the forest brings you to a river, where you can have a refreshing swim or take a picnic with you.

In ‘Yasnaya Polyana’ there is a recreation centre, screening films and shows followed by Q&A sessions with the directors-a great attraction for any film or stage fanatics. For those whose tastes crave entertainment of a more musical nature, ‘Dolche trio’ concerts are also on offer. Performed by graduates of the Moscow conservatoire named after P.I. Tchaikovskiy who now play in the Tula Philharmonic. Education and learning are major themes here; with Under the ‘Prosveshchenie’ (Enlightenment in English) programme lectures giving people the opportunity to learn about physics, linguistics, mathematics, art, biology and history. After leaving the new recreation centre building with its white columns, you can turn left and take a walk along the only street in Yasnaya Polyana village.

Sunday is an ideal day to visit Kozlova Zaseka railway station-a significant landmark, being the place where the Tolstoys collected their mail, welcomed guests and where the great Lev Tolstoy made his calls. The station dates back to the 16th century when it was part of the South Russian border fortifications on the edge of the principality of Moscow. The site became a railway station in 1868 and was named Kozlova in honour of governor Ivan Kozlov. It was from this very location that he left for the south in 1910. He fell ill and died on the way at Astapova railway station.