10 must-see places in the Vologda Region 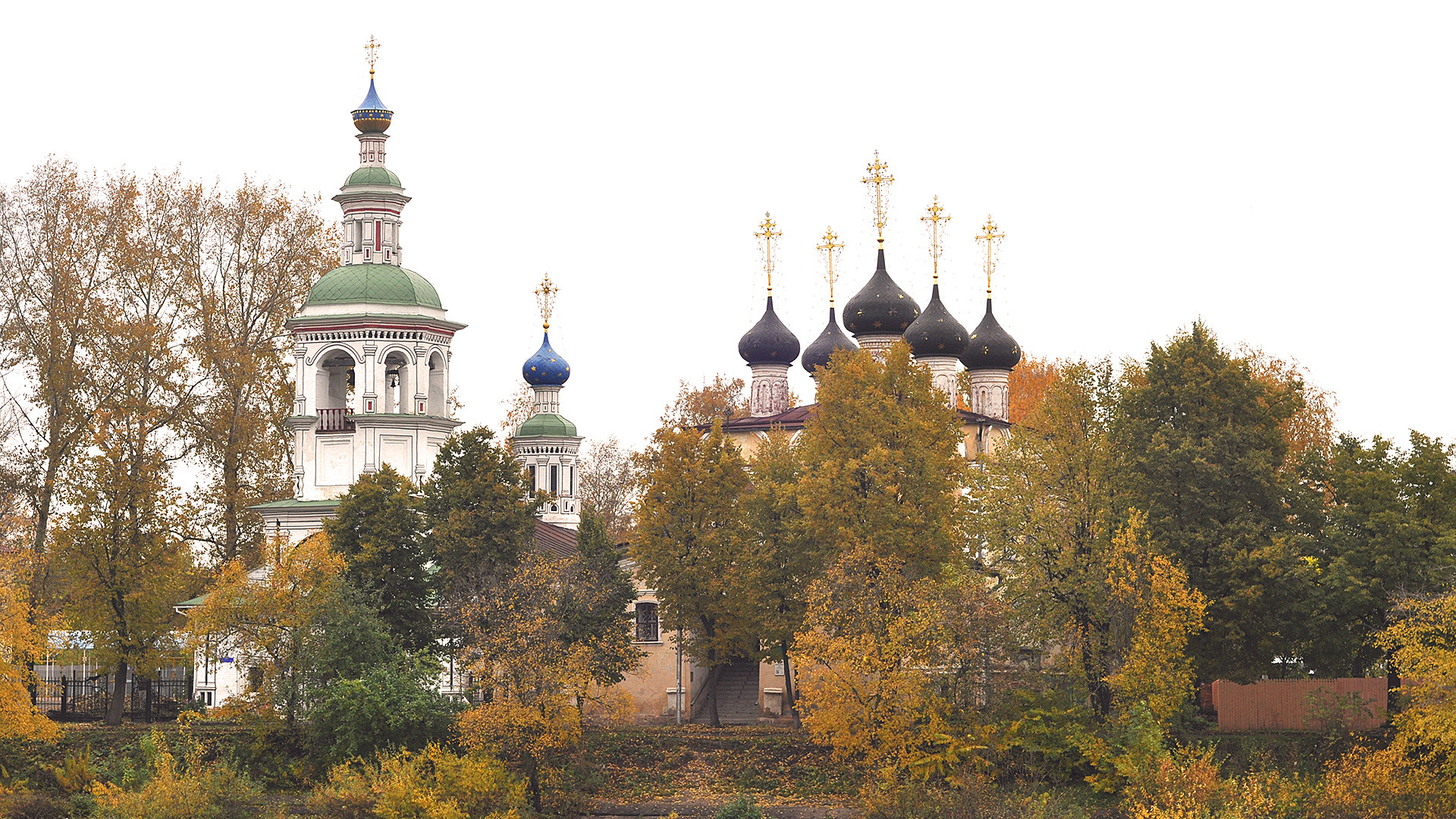 Vologda has some astonishing sights.

Anna Sorokina
A massive ancient kremlin, the medieval Ferapontovo Monastery, legendary Vologda lace, and the home of Russian Santa Claus - this is just a sampling of the amazing northern sites that will capture your heart, and it’s just an overnight train ride from Moscow.

The provincial city of Vologda (300 miles north of Moscow) attracts with its fairy-tale and has many stunning places to visit. 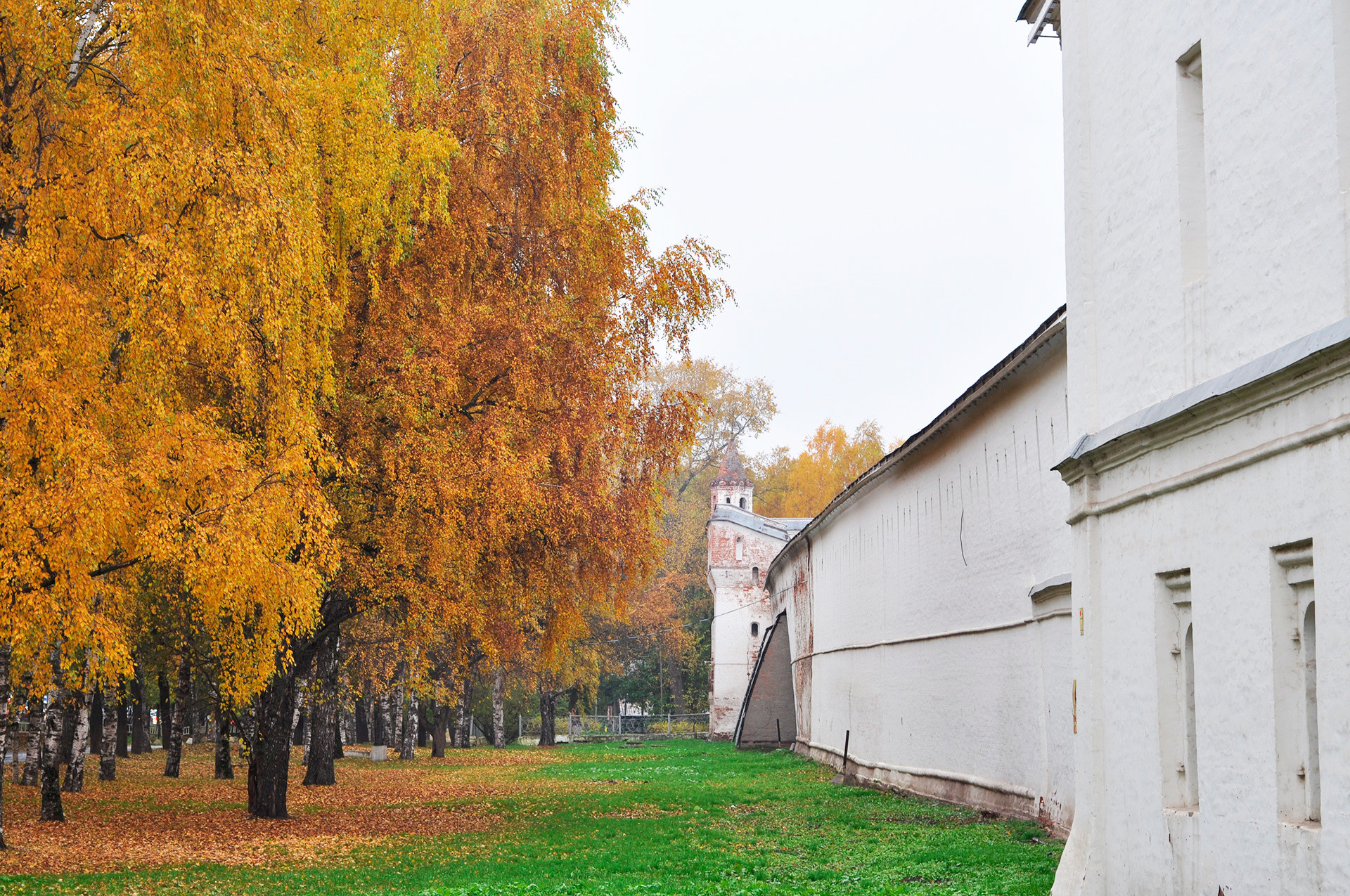 The white-stone in Vologda’s center was founded in the mid 16th and is one of the city’s most popular sights. The has the former Bishop's house, where the local treasury was kept, the Resurrection Cathedral and the St. Sophia bell tower. On the high bank of the Vologda you can see the monumental St. Sophia Cathedral – the city’s first stone church, which was built by Ivan the Terrible.

Near Kremlin Square is a house museum dedicated to Varlam Shalamov, the author of Kolyma Tales. This is where he was born and lived until 1924.

Another remarkable place on Kremlin Square is Russia’s only Museum of Lace. Vologda lace is famous around the globe, and the museum exhibits pre-1917 clothing, as well as canvases with images of Soviet leaders and modern festive decorations. Read more about Vologda lace. 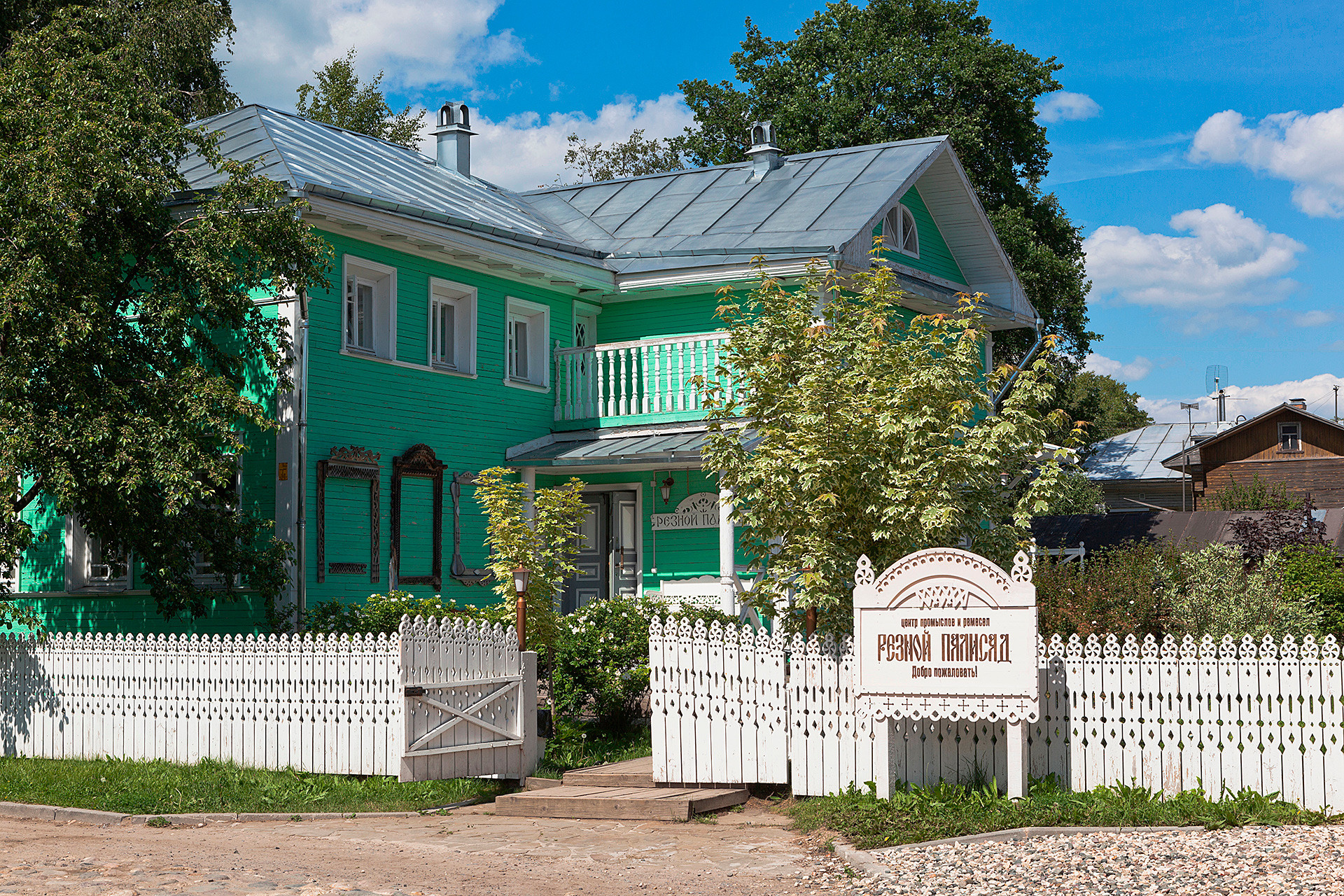 The Vologda Region is famous for folk crafts: , ceramics, and woodcarving. Local masters decorate their houses with carved fences, and one such preserved building became the Center of Folk Crafts. Now, it’s not only an exhibition of ancient crafts but also an active place for meeting local craftsmen. 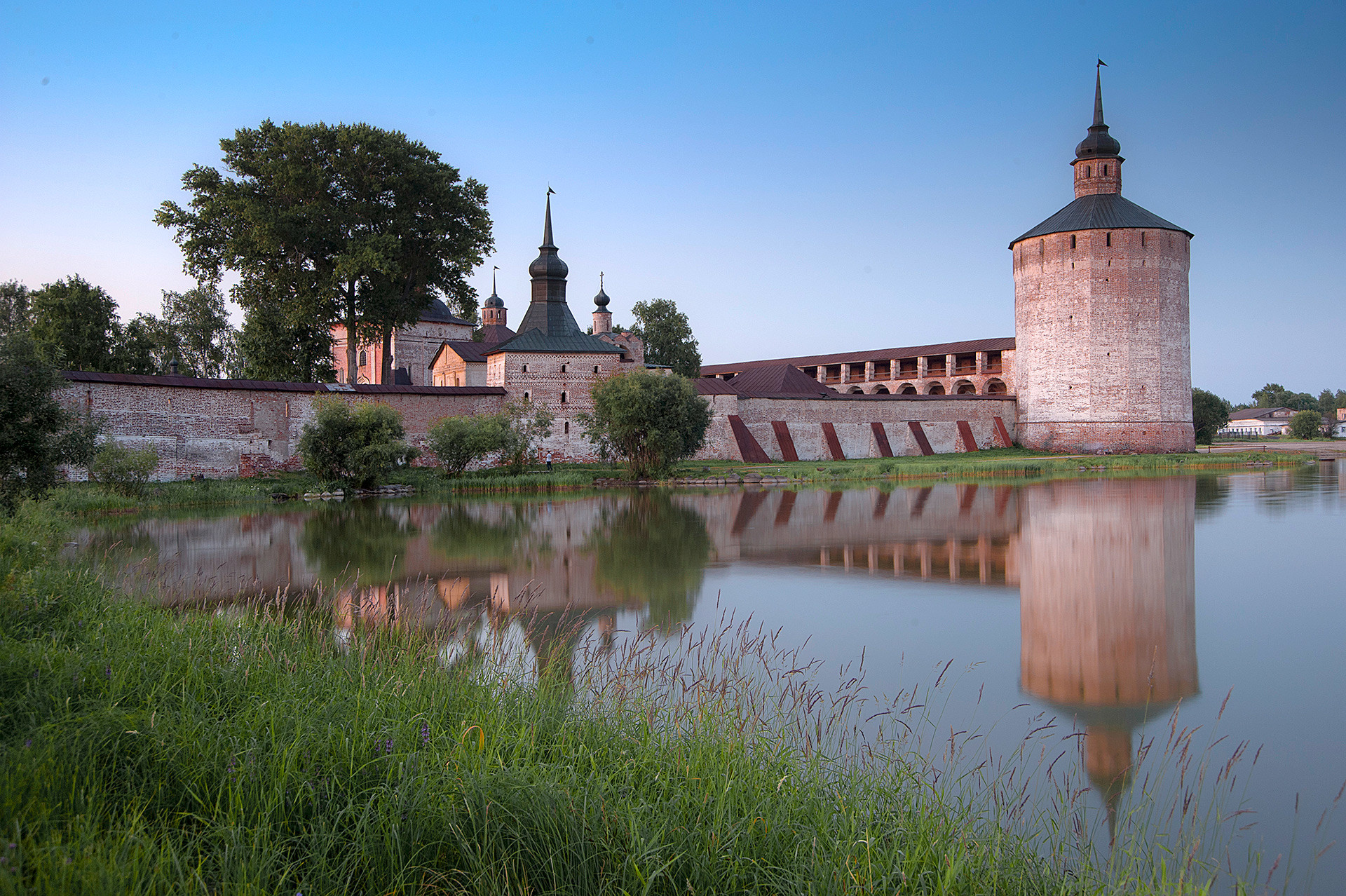 Founded in the late 14th century, the Kirillo-Belozersky Monastery (80 miles north of Vologda) is one of Europe’s largest monasteries, and its walls are more than two kilometers long. The is located on Lake Siverskoye. Ivan the Terrible visited the monastery many times and he even thought to spend the rest of his days here. In Soviet times, the monastery became a museum, and its main task is to preserve the site’s legacy and buildings. 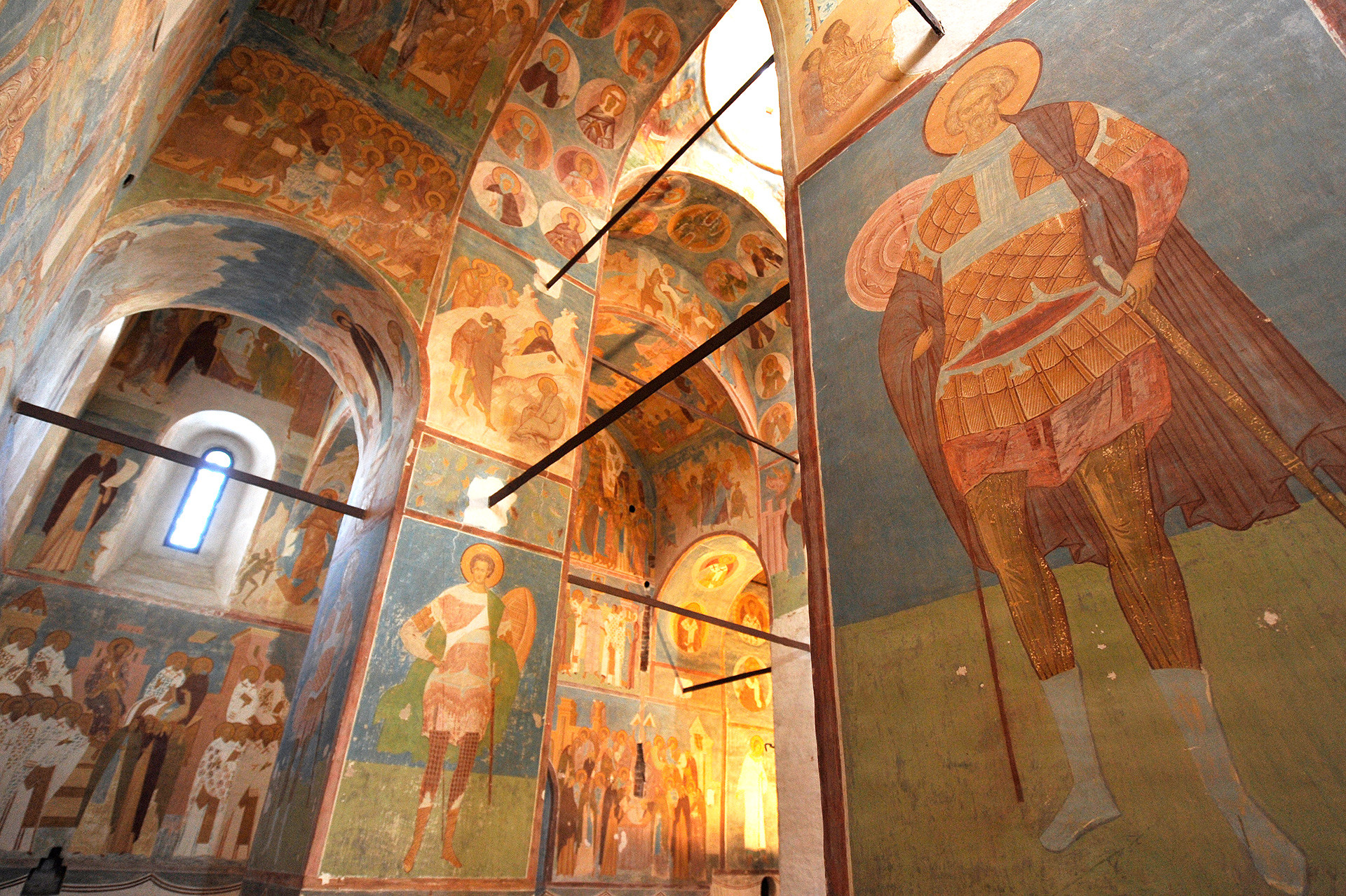 Fresco by Dionysus with images of warriors Dmitry of Thessaloniki (left) and Mina (right) in the Nativity of the Virgin Cathedral.

Ferapontovo village (about 75 miles north of Vologda) is located on a bluff with a sweeping vista of Lake Borodava. Are lovers will enjoy a visit to the Ferapontov Monastery and its luminous frescoes made in 1502 by Andrei Rublev’s follower, , in collaboration with his sons. The frescoes are protected from the severe local climate and still retain a rich palette of colors.

The Ferapontov Monastery is surrounded by lakes and forests that convey the lyrical beauty of the Russian North. 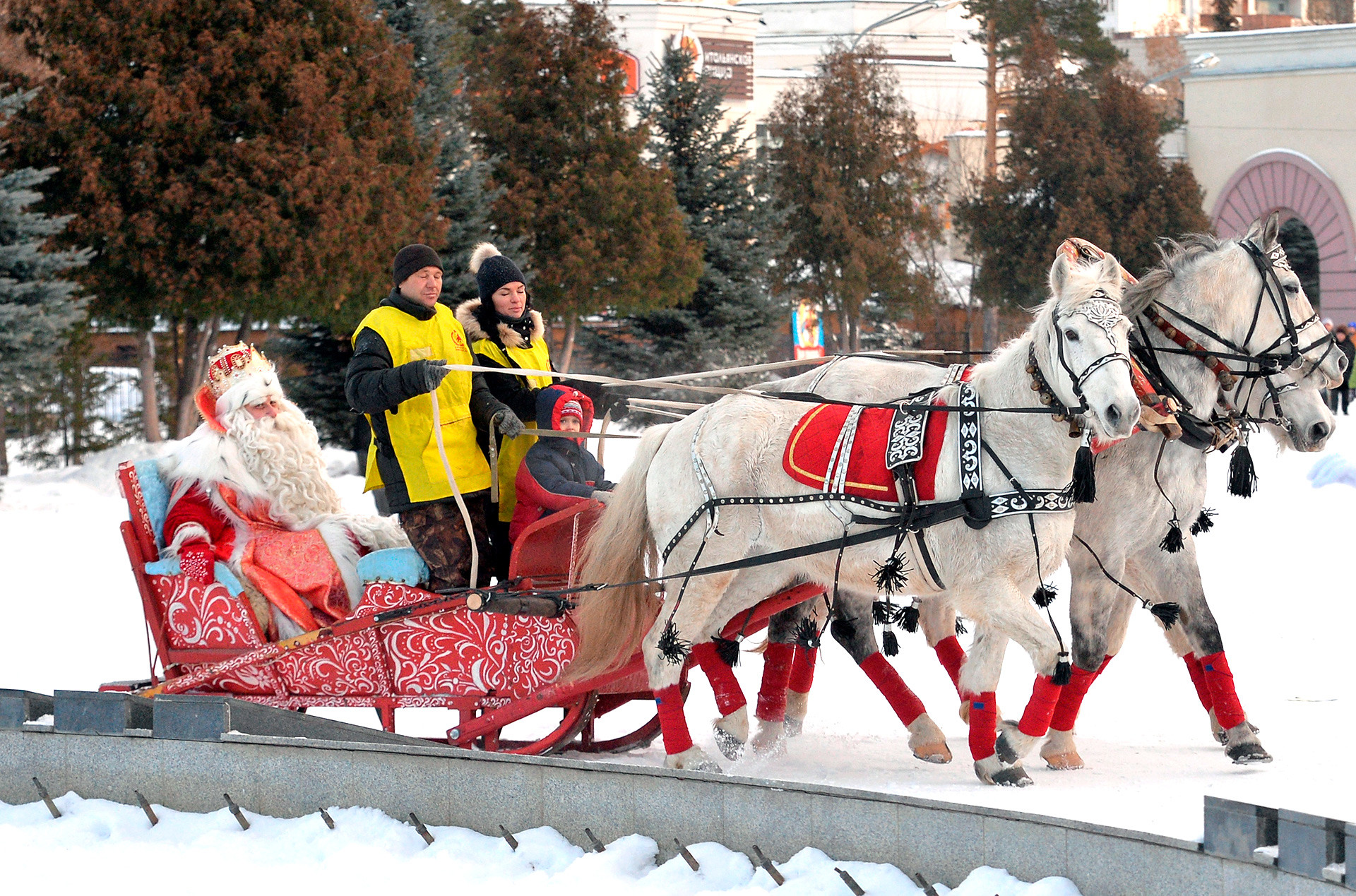 Veliky Ustyug is the residence of Ded Moroz.

Veliky Ustyug is a town (250 miles northeast of Vologda) that in centuries past was one of the major cities in Russian North. Since 1999, Veliky Ustyug has been the residence of Russia’s Santa Claus – Ded Moroz. The residence (Votchina) is a major tourist attraction in winter holidays, and here any adult can relive his childhood.

Each year, the local post office receives millions of letters from Russian children for Ded Moroz. Children and adults who want to write to Ded Moroz should send letters to: 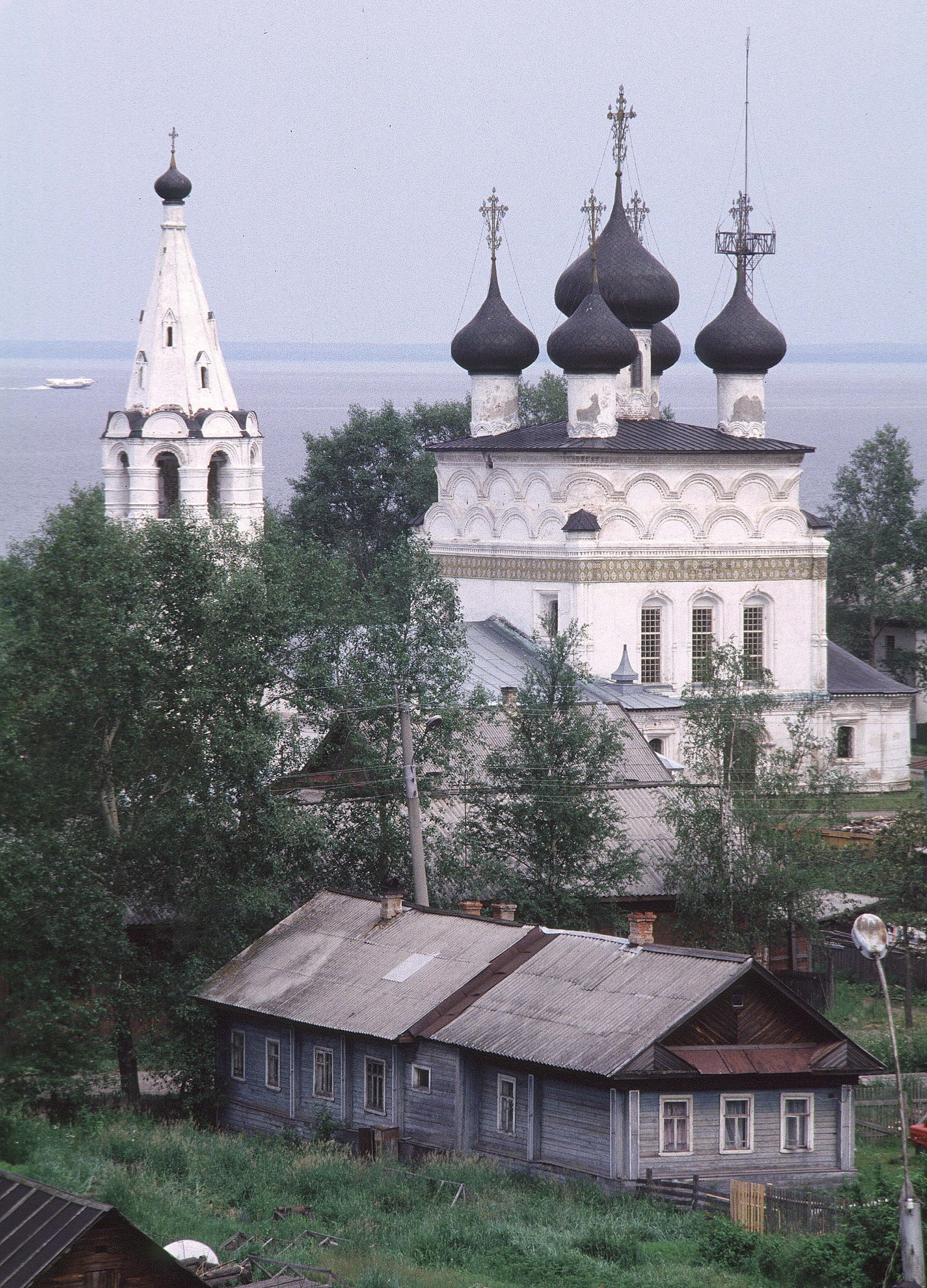 The small town of Belozersk (95 miles north of Vologda) is among the oldest Slavic settlements, known since the 9th century. The town is located on Lake Beloye (White), and in the 15th a fortress () was built along with beautiful cathedrals. Thanks to Belozersk’s remote location many of its medieval buildings have been preserved.

In addition to the fortress’ historical significance, its high ramparts offer breathtaking views of the town. 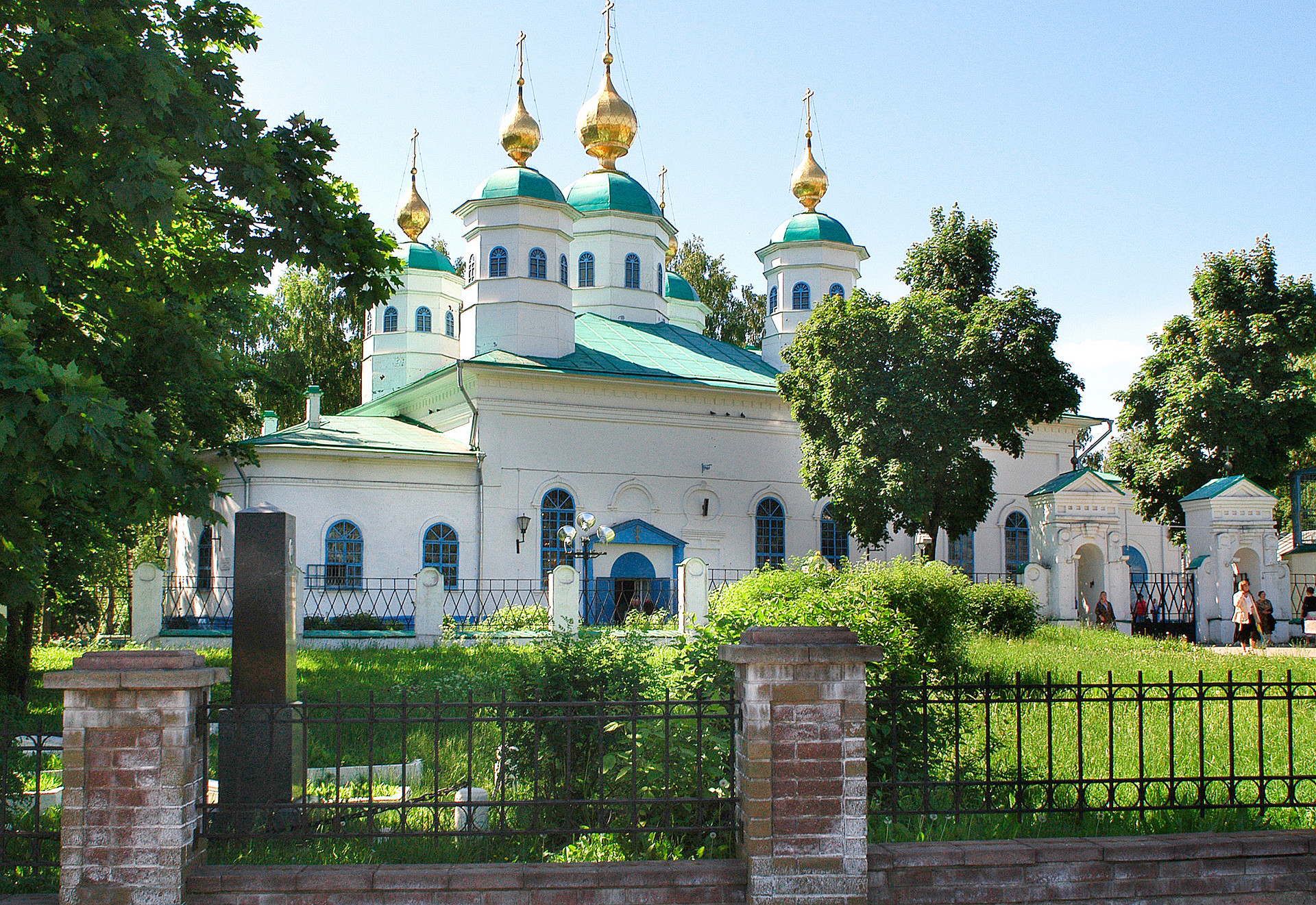 Vologda Region’s industrial center, Cherepovets (80 miles west of Vologda) is located on the Sheksna River. With a population of 300,000, the city is known as the home of Severstal, one of Russia’s largest industrial enterprises. Nevertheless, the city has more than factories - for example, there are interesting examples of architecture. The Resurrection Cathedral, the Chapel of St. Nicholas, and the Chapel of St. Philipp Arapskii have been restored and are important cultural and religious institutions. 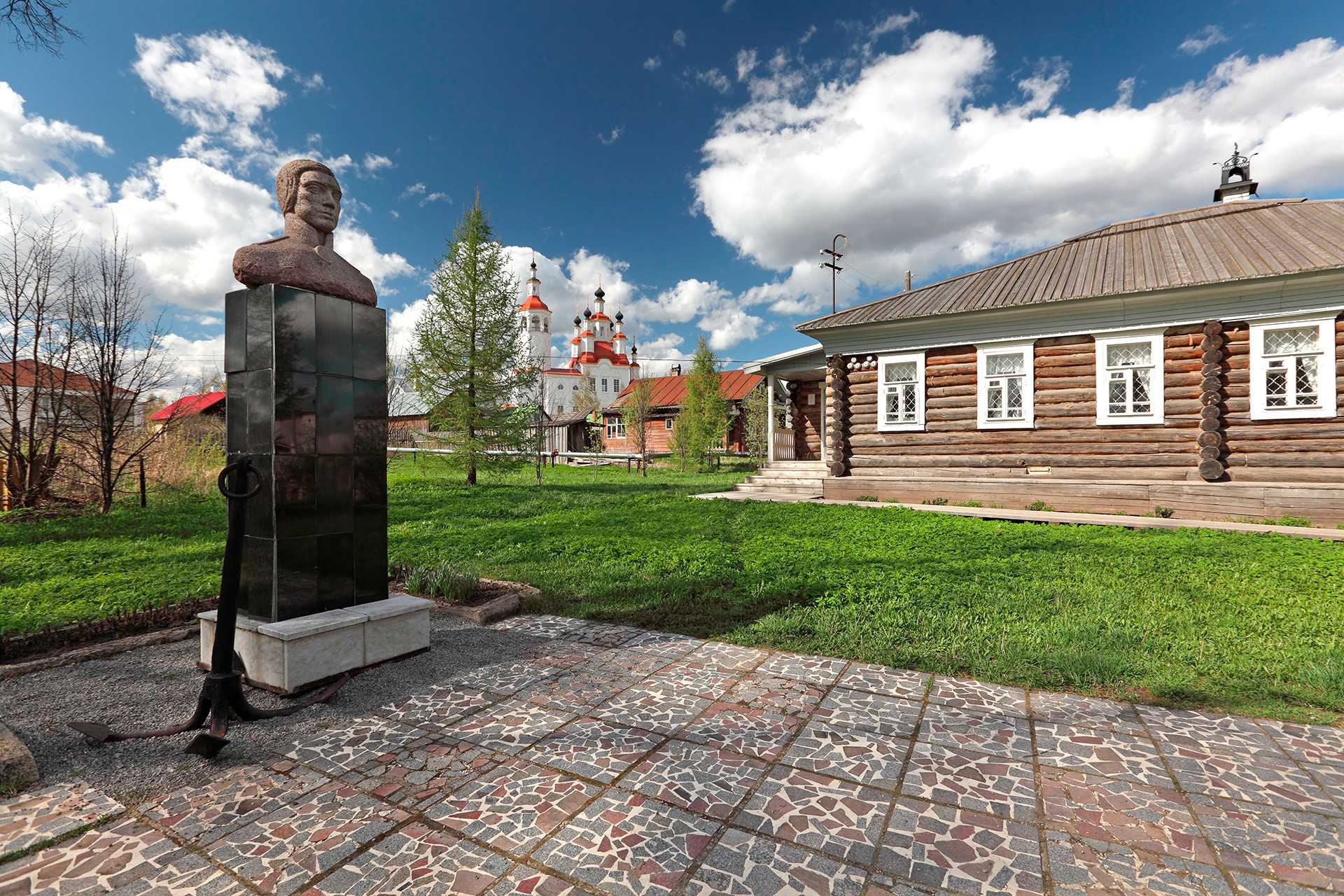 The Kuskov museum in Totma.

Every year on July 26 the small town of Totma (112 miles northeast of Vologda) celebrates Russian America Day at the same time as Fort Ross in northern California. Why? Fort Ross was founded by Totma native Ivan Kuskov, who in 1808 led a voyage to the shores of western America. After several expeditions, Kuskov founded Fort Ross, and the colony organized a school for Russian and Native American families. He married a local woman who converted to Orthodoxy, returning with her to Totma in 1823. In 1990, the house where Kuskov spent the last months of his life became a branch of the Totma Museum Complex, which has documents and items related to the exploration of California. Today, residents of Totma and Fort Ross have a tradition of showing the tolling of the bells in the churches of Totma and Fort Ross via video link. 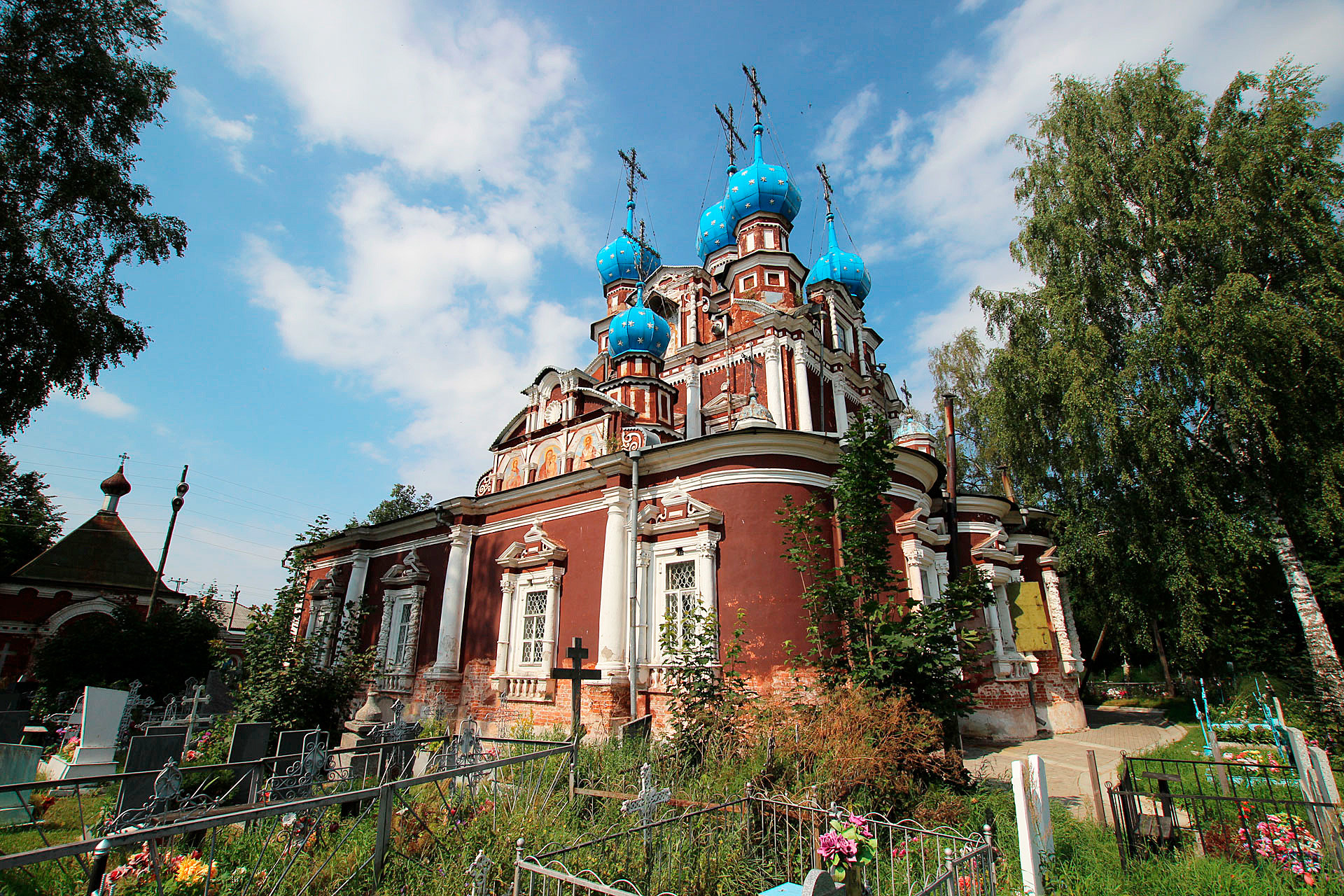 The town of Ustyuzhna (200 miles west of Vologda), located on the Mologa River, is known as one of the oldest centers of Russian metalworking.

The town preserved the historical center rather well, and the most remarkable work of religious art here is the richly decorated Church of the Kazan Icon of the Virgin in the town's main cemetery. It was built in the late 17th century thanks to a donation from the famous merchant, Grigory Stroganov. Another important cultural monument is the 17th century Nativity Cathedral. 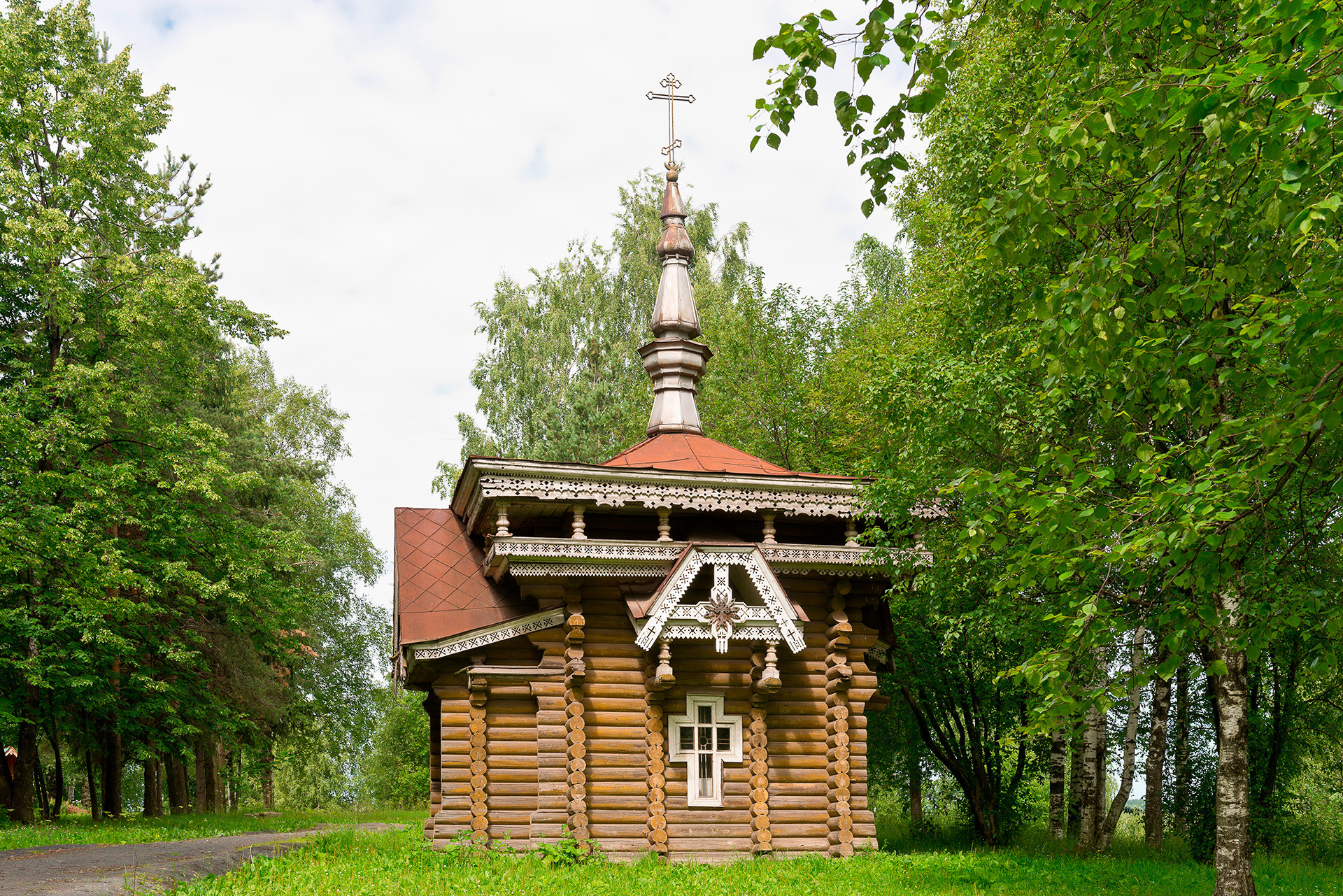 The medieval town of Vytegra (190 miles northwest of Vologda) is one of the most visited places in Russia, especially attracting tourists who are interested in wooden church architecture.

The town center has substantial brick buildings dating to the turn of the 20th century, including local government offices, merchant houses, and churches. Some are still standing today.