Where to go in Russia other than Moscow and St. Petersburg 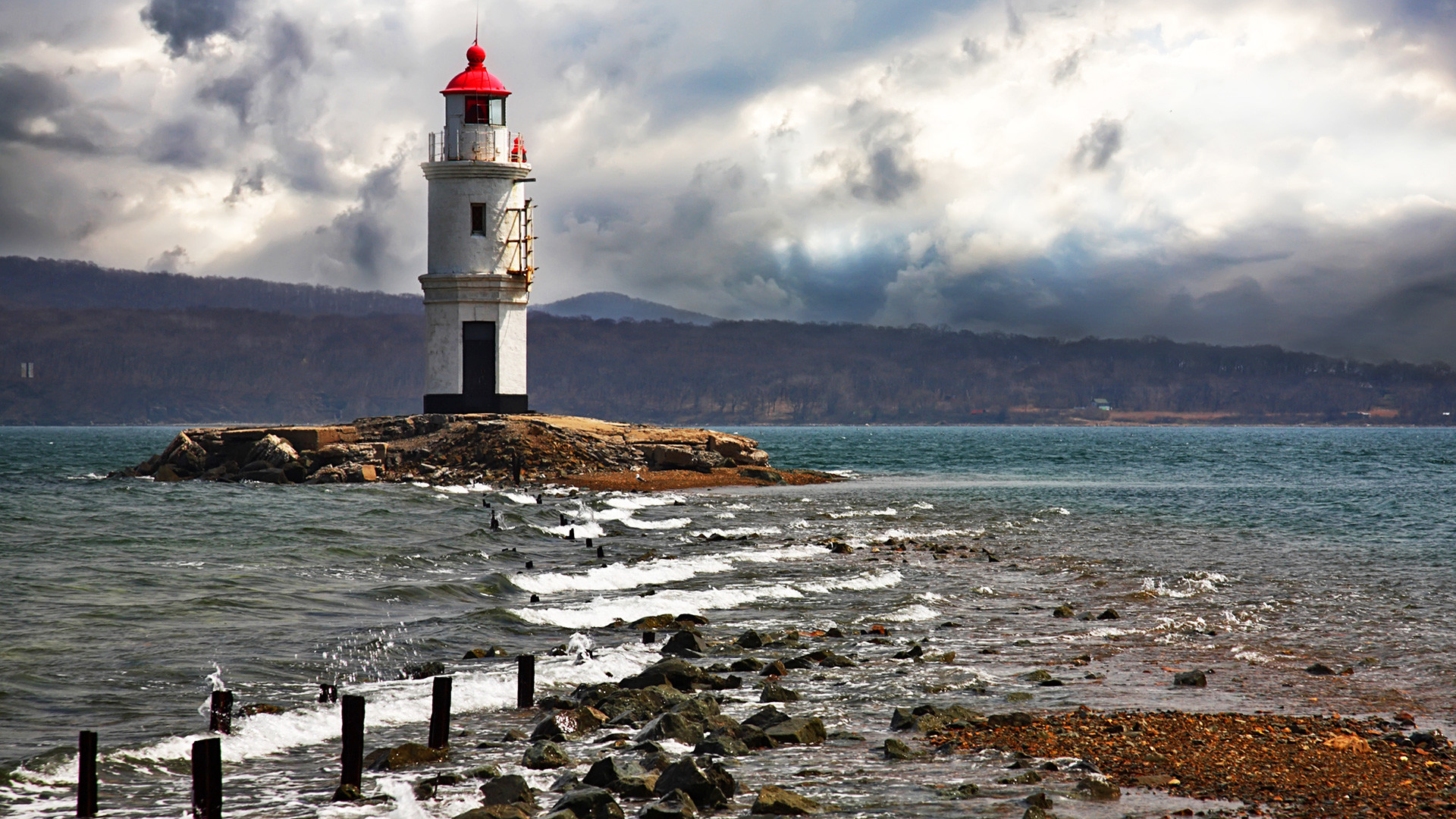 Legion Media
We explain what to see, when to go and where to take the perfect Instagram picture.

If you’ve already maxed out on the twin capitals, we suggest probing Russia's depths and exploring its incredible nature and places where legendary saints lived and almighty battles were waged.

Just a couple of hours' drive from Moscow will plunge you headfirst into the atmosphere of old Russia. A world of small streets and wooden houses — all wonderfully homely and inviting. Here, you will stumble over an ancient church at every turn, and the whole city is doable on foot in a single day. Suzdal is part of Russia’s Golden Ring — a circle of ancient towns and cities to the north-east of Moscow that all predate the capital and all with a rich history. If you have time, we recommend trips to Yaroslavl, Kostroma, Uglich, Vladimir, Sergiev Posad, Rostov Veliky (don’t confuse with Rostov-on-Don) and Pereslavl-Zalessky. 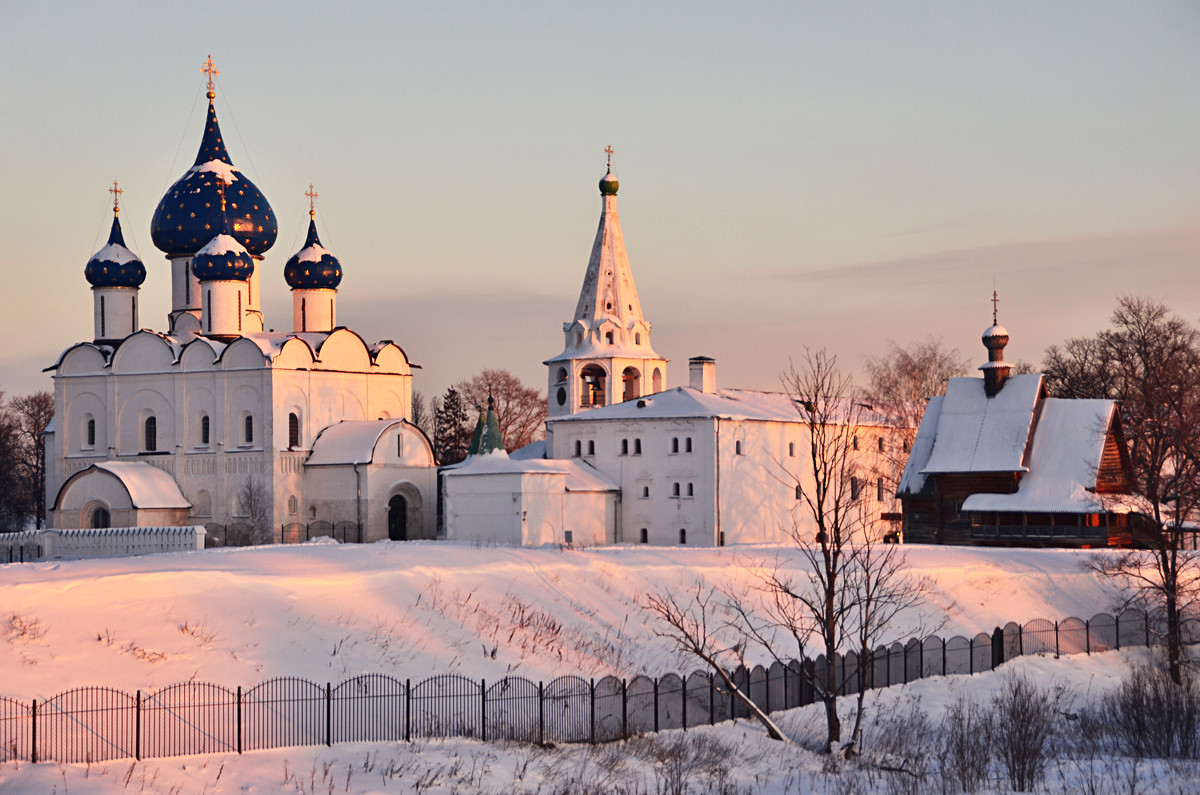 How to get there: From Moscow to Vladimir by train, then by shuttle bus

When to go: The best time is winter, just before New Year or Maslenitsa (Shrovetide, in 2020 it will be February 24 – March 1). The mood is jolly with folk festivals, fairs, dances and street food, especially pancakes! Be sure to dress warm. If you do get cold, you’ll be offered a cup of Russia’s national low-alcohol drink: mead. For teetotalers, there’s tea or traditional sbiten.

Where to stay: In a private house/cabin or hotel, for example, Pushkarskaya Sloboda.

Where to eat: Uley restaurant (better to book in advance)

Sited aloft a picturesque spit on the Volga and Oka rivers, this city offers an unusual blend of antiquity (small, tilting wooden houses) and modernity (trendy bar-restaurants and new buildings). Nizhny Novogorod is also the birthplace of writer Maxim Gorky. In Soviet times, it bore his name, and there are three museums dedicated to him.

Perfect snap (view of the spit): 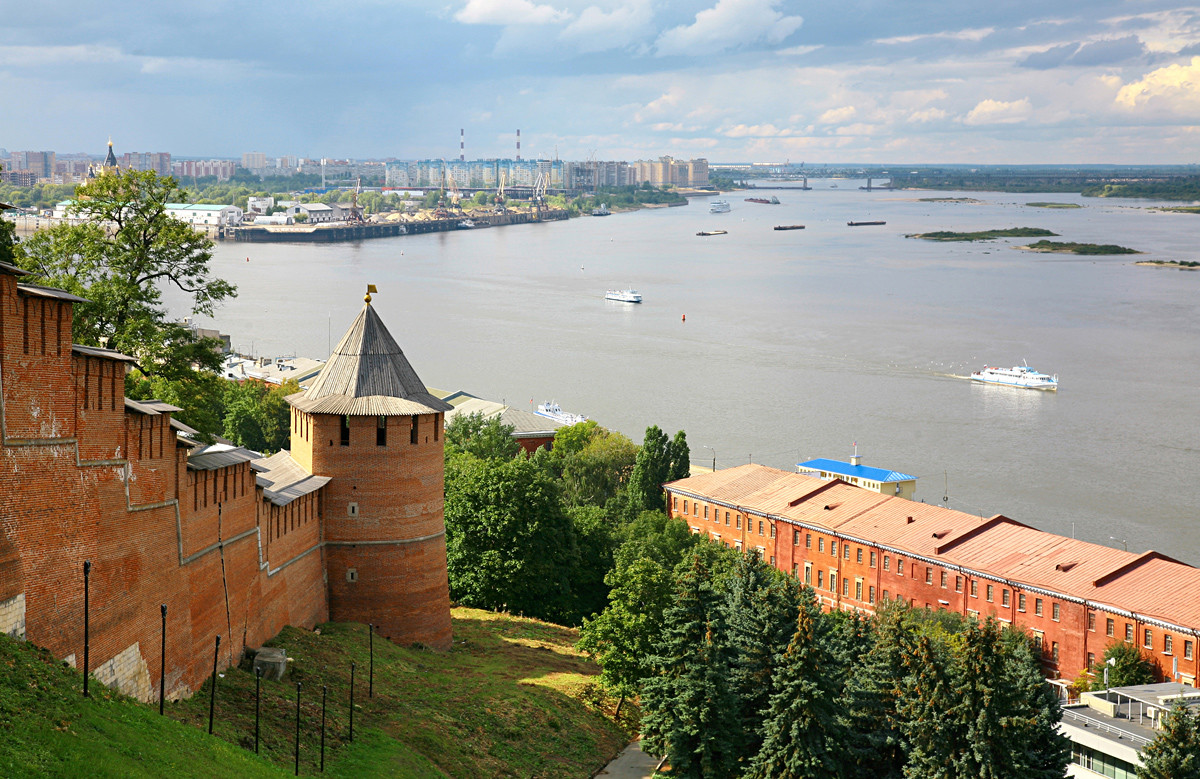 How to get there: On the Lastochka or Strizh high-speed trains from Kursk Station in Moscow.

When to go: April – October

What to see: Nizhny Novgorod Kremlin (and the Arsenal Museum of Contemporary Art inside the kremlin), Chkalov Stairs, Nizhnevolzhskaya Naberezhnaya street, Rozhdestvenskaya and Bolshaya Pokrovskaya pedestrian streets, the cable car across the Volga, Grebnoy Canal Beach (in summer)

Where to stay: Near Nizhny Novgorod Kremlin; for example, Hotel Pokrovsky Posad

Where to eat: Gorky Brewery gastropub

Russia is a multiethnic and multireligious country, and the Republic of Tatarstan is a great place to enjoy some oriental flavor.

Perfect snap (the city symbol—the dragon Zilant, and a view of the kremlin): 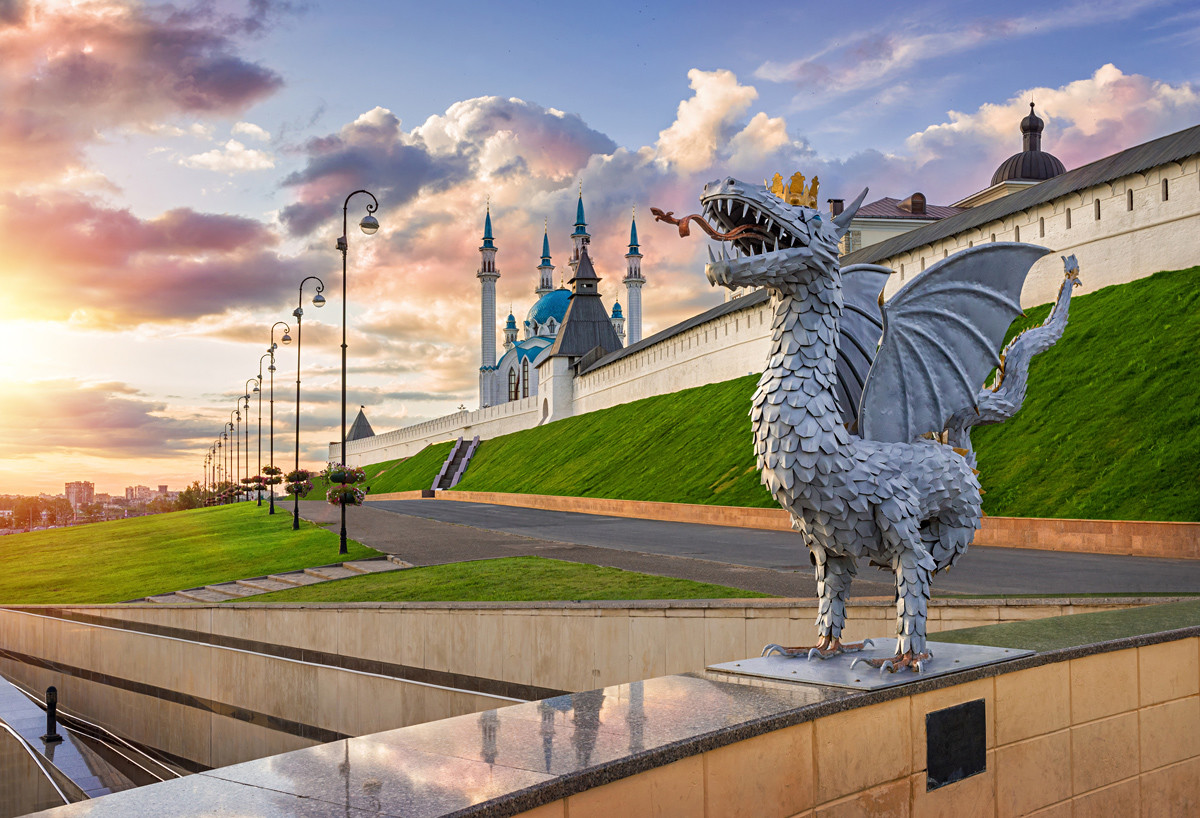 How to get there: 2 hours by plane or 14 hours by train from Moscow’s Kazan Station

When to go: April – October

Where to eat: Any restaurant serving Tatar cuisine; the sweet dish çäkçäk (pronounced “chak-chak”) is a must

This is the legendary Stalingrad by a different name. A city of military glory, which endured one of the bloodiest battles of WWII and in the history of mankind. Head to Mamayev Kurgan, where the epic statue The Motherland Calls proudly stands. (And before the trip, you might like to watch Enemy at the Gates with Jude Law and the Russian movie Stalingrad.) 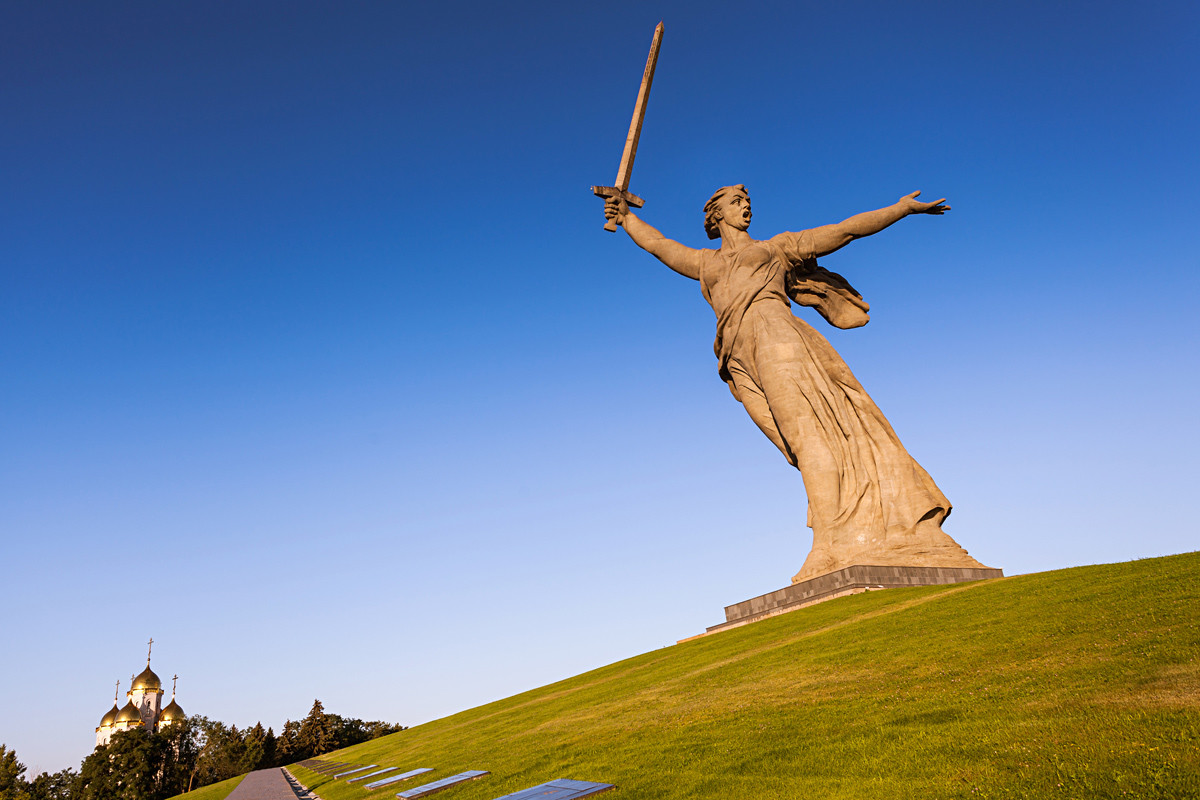 How to get there: By plane from Moscow

When NOT to go: On May 9, because Victory Day is a very crowded affair; also bear in mind that summer gets very hot down here.

Where to stay: Hotel Volgograd

Here you can see the Europe-Asia obelisk, which marks the border between the two continents (although the exact location is disputed by geographers). The city has interesting architecture—a mix of Soviet constructivism, eclecticism and baroque. But above all, Yekaterinburg is infamous for the execution of Nicholas II and his family, who were shot here in 1918. 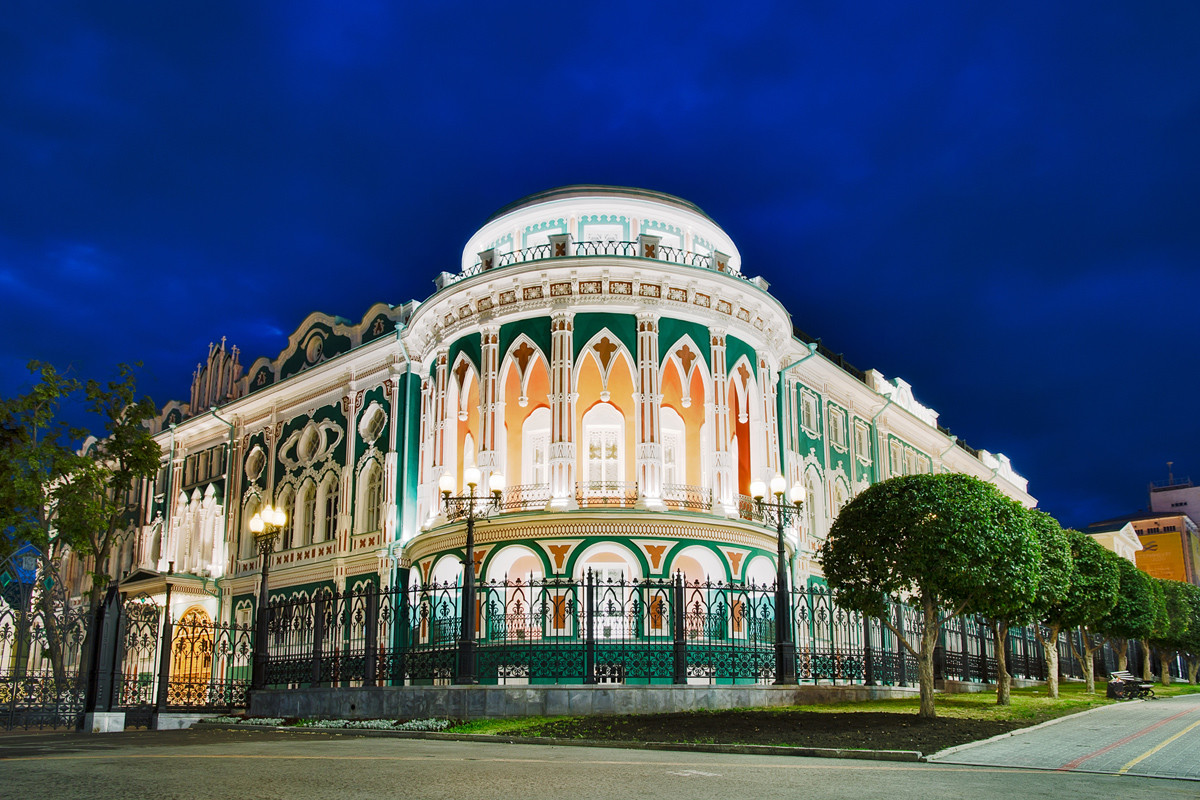 How to get there: By plane from Moscow; by bus or train from Perm

When to go: May – September

What to see: The Church on the Blood, Ipatiev House, the Yeltsin Center, Sevastyanov House, Literary Quarter Park, the constructivist buildings of Chekist Town outside the city, Ganina Yama Monastery.

Where to stay: Hotel Vysotsky

Over the past decade, the city has rightfully earned its status as the cultural capital of the Urals. It is home to the PERMM Museum of Modern Art — the brainchild of renowned gallery owner Marat Gelman, while Theater-Theater shows modern experimental productions. The city’s motto is “Happiness is round the corner,” and an art object with this inscription stands on the embankment of the Kama River.

Perfect snap: (“Happiness is round the corner” art installation) 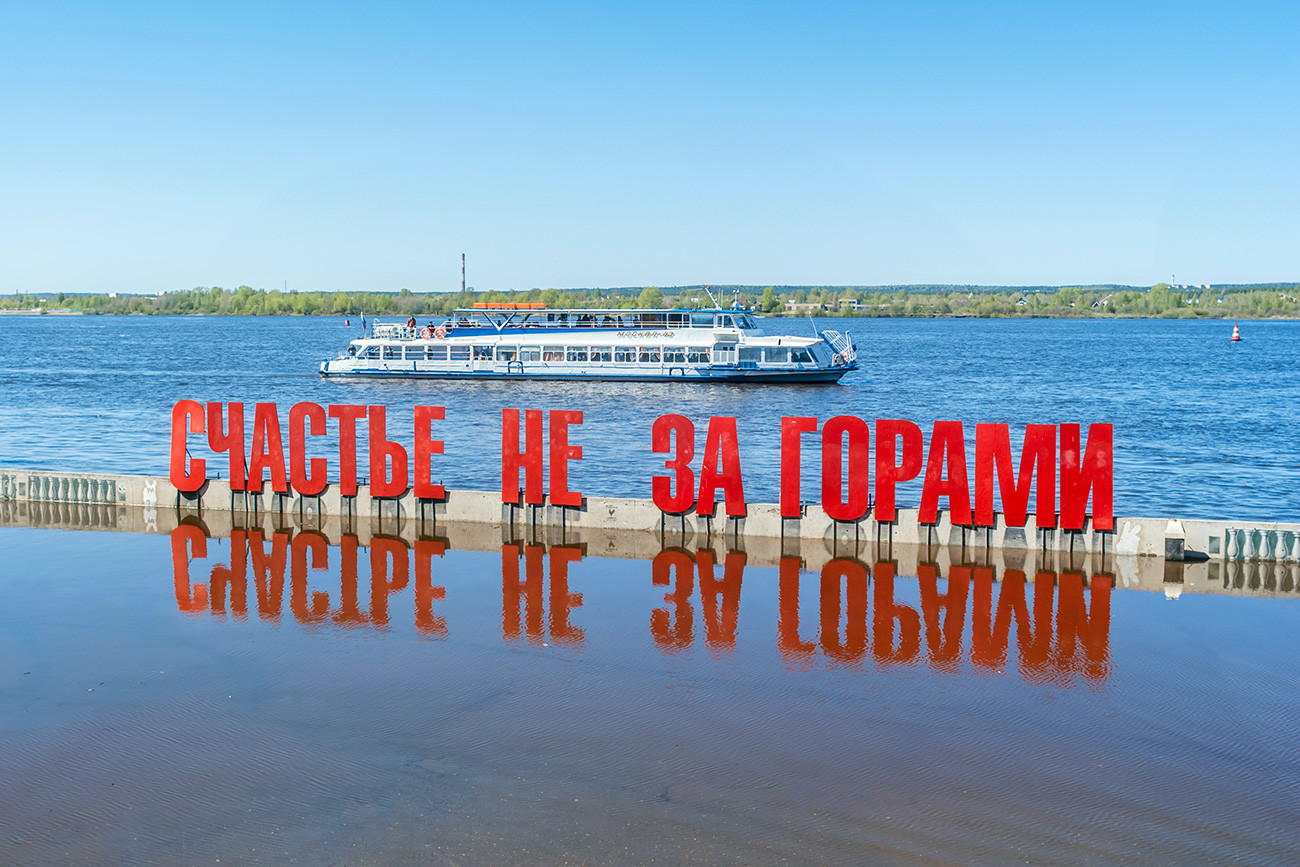 How to get there: By plane, bus or train from Yekaterinburg

When to go: May – September

Where to stay: Marmalad and Prikamye hotels

This city embodies the full might of Siberia with its vast open spaces, majestic Yenisei River and jaw-dropping nature. In winter, the temperature here can fall below -30 C, but the air is very dry, so it’s not as bad as -20 C in Moscow or St Petersburg. Incidentally, in the city center, there are tents with warm mittens and socks—don’t miss them! 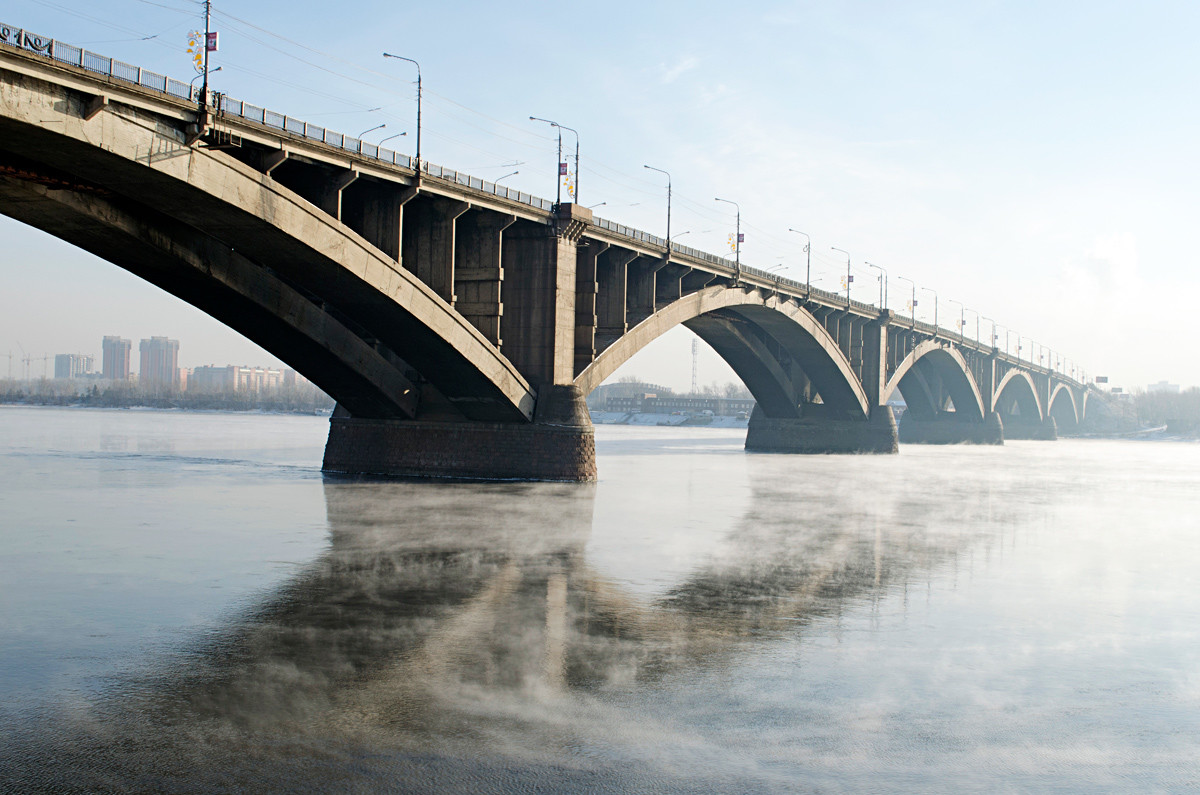 How to get there: By plane or the Trans-Siberian Railway

When to go: May – September; or Sheregesh Ski Resort from December to April

Where to stay: Oktyabrskaya and Sibir hotels

Journey to the edge of the Earth and look the ocean in the eye—a priceless feeling. Vladivostok will welcome you with the very freshest seafood, large ships, and breathtaking bridges. The proximity of Asia is tangible—from the street food (try the Pyanse steamed pies) to the right-hand drive cars from Japan and the abundance of Korean cosmetics. 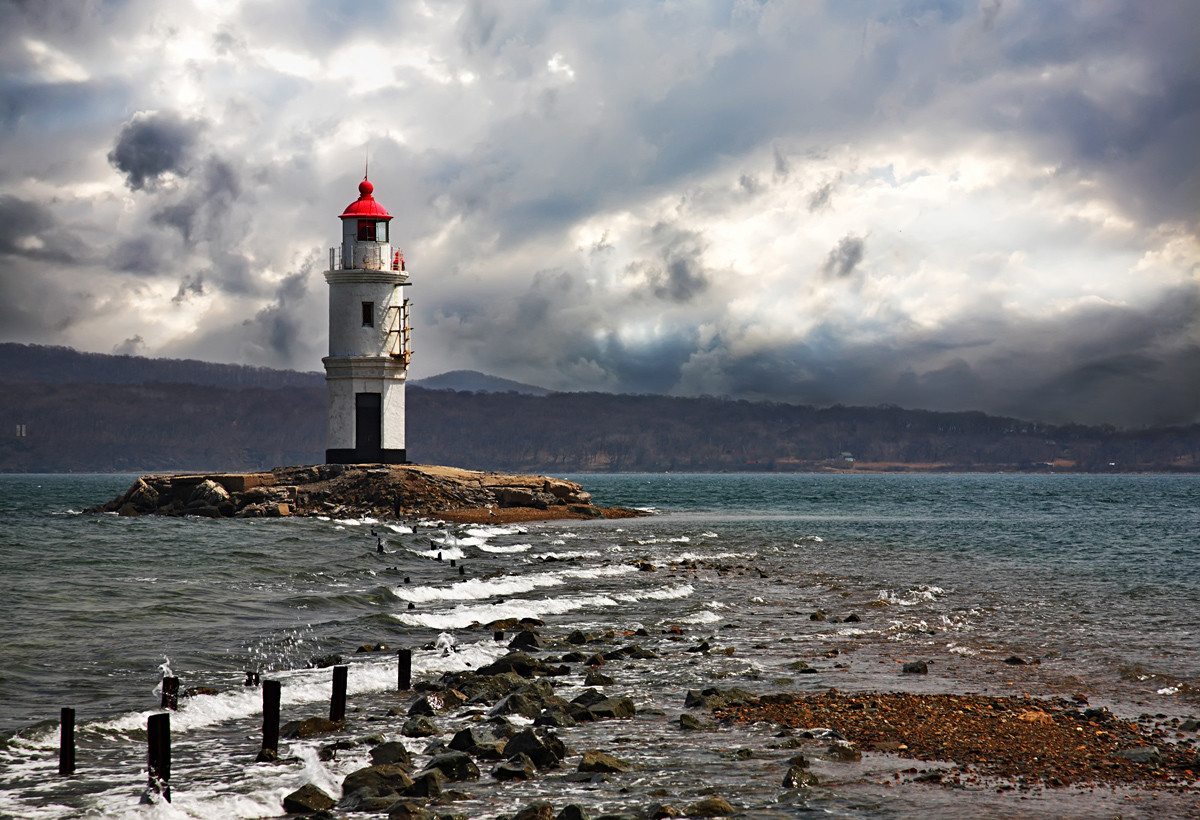 How to get there: By plane or the Trans-Siberian Railway

When to go: May – October

Where to stay: Astoria and Azimut hotels

Here you can try the healing mineral water (the most popular local brand is Narzan), stroll along the mountain paths of the Caucasus, and relax in an atmospheric Soviet sanatorium. There's no need to limit yourself to Kislovodsk either—take a trip to neighboring Pyatigorsk (where the great Russian poet Mikhail Lermontov died in a duel) or Essentuki, the home of another famous Russian mineral water. 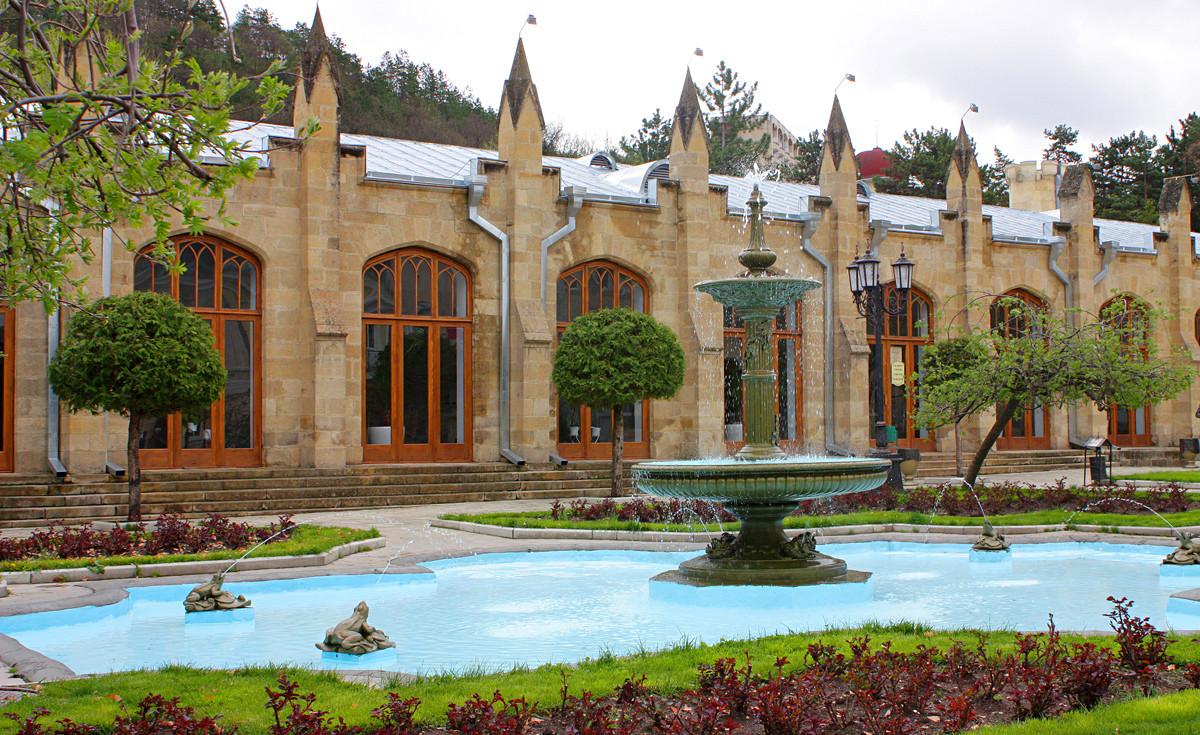 How to get there: By plane to Mineralnye Vody Airport, and from there by taxi or train

When to go: June – September

Where to stay: Any sanatorium

Where to eat: You should definitely try some delicious Caucasus cuisine at the Shashlyk-Mashlyk, Ogonyok and Barashka restaurants

Sochi is a unique place that offers both sea and ski holidays. Not at the same time, admittedly. The beaches here stretch for many kilometers along the sea, so you don't need to stay in the city itself; other options include Tuapse and Lazarevsky. 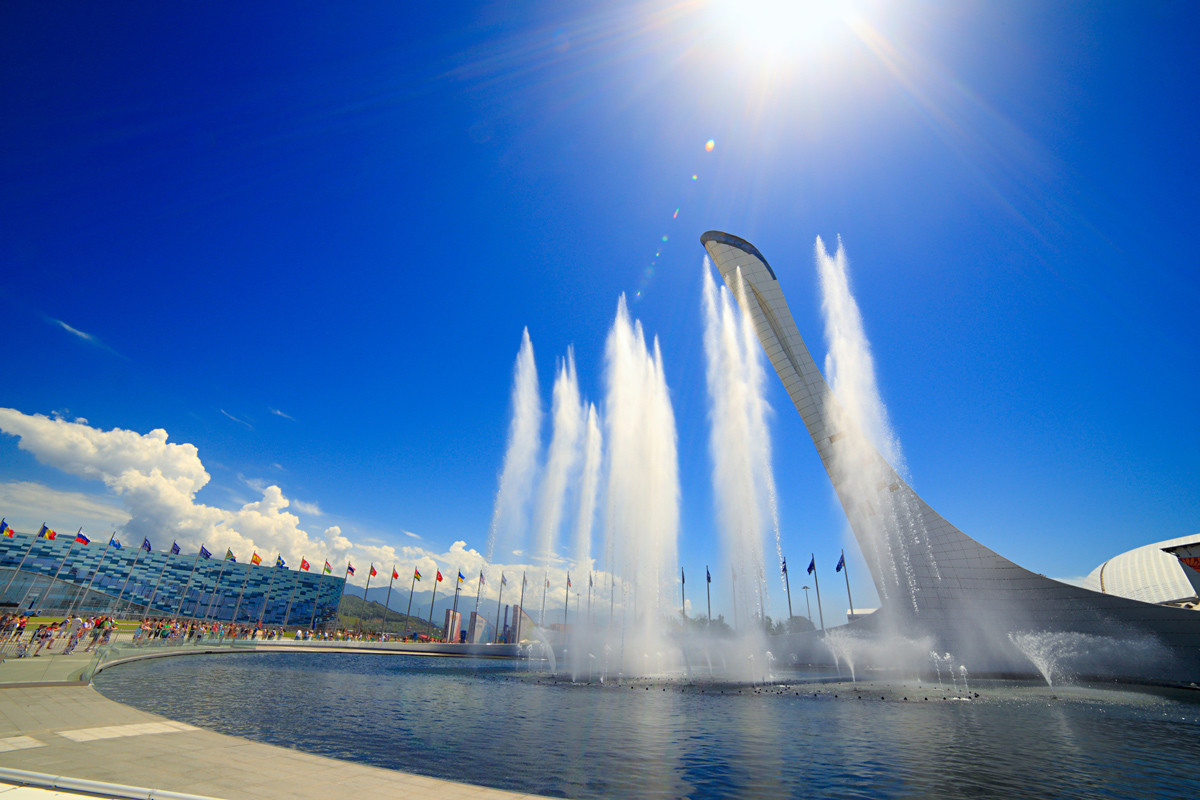 How to get there: By plane or train from Moscow to Adler, then by suburban train, taxi or car share to Sochi or Krasnaya Polyana

When to go: May – September for the sea; December – March for the mountains

Where to eat: Try the mouthwatering fish, meat shashlik (kebab), and other Caucasus dishes, such as chebureki (deep-fried turnovers) at Promenade, Red Buffet, Krasnaya Polyana cafe, and Vysota 2320 restaurant.

By the way, don’t worry if you haven’t been to Moscow or St. Pete. Most likely, you’ll have to go there first to get anywhere else. Book a flight with a long layover and have time to see all the main sights in our guides!

And if you don’t know how to get a visa, see here for some handy instructions>>>