How the Canadian military ended up in Civil War-era Russia 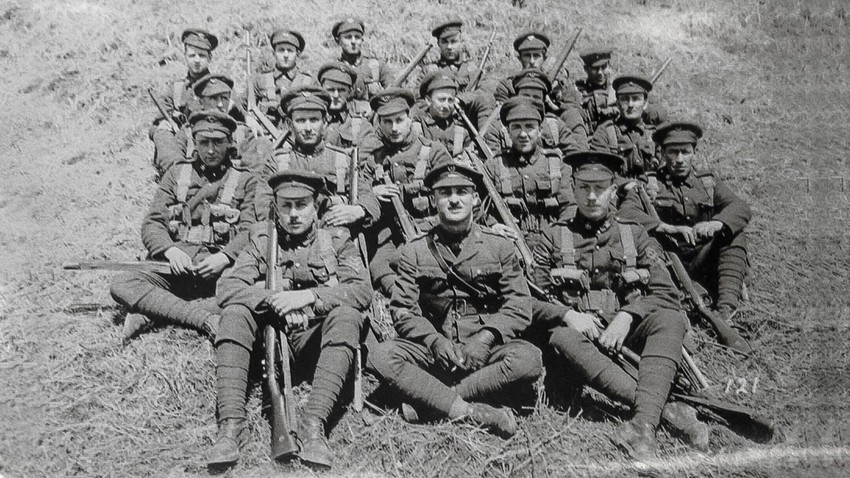 The Canadian troops at Gornostay Bay, Russia, where they would live for the duration of the mission.

Archive photo
Canadian forces spent more than a year in the Russian city of Vladivostok, opening up a bank, a training camp, a hospital, and even taking part in quelling a partisan rebellion. Meanwhile, the story of how the Canadian corps ended up in Russia, likewise, started with a rebellion. Their own. But why were they sent there?

On December 21, 1918, a riot erupted in the Canadian city of Victoria. The 259th Battalion of the Canadian Siberian Expeditionary Force was about to be shipped to Vladivostok. But while on the march to board their ships, they broke rank and flat-out refused to leave for Russia. 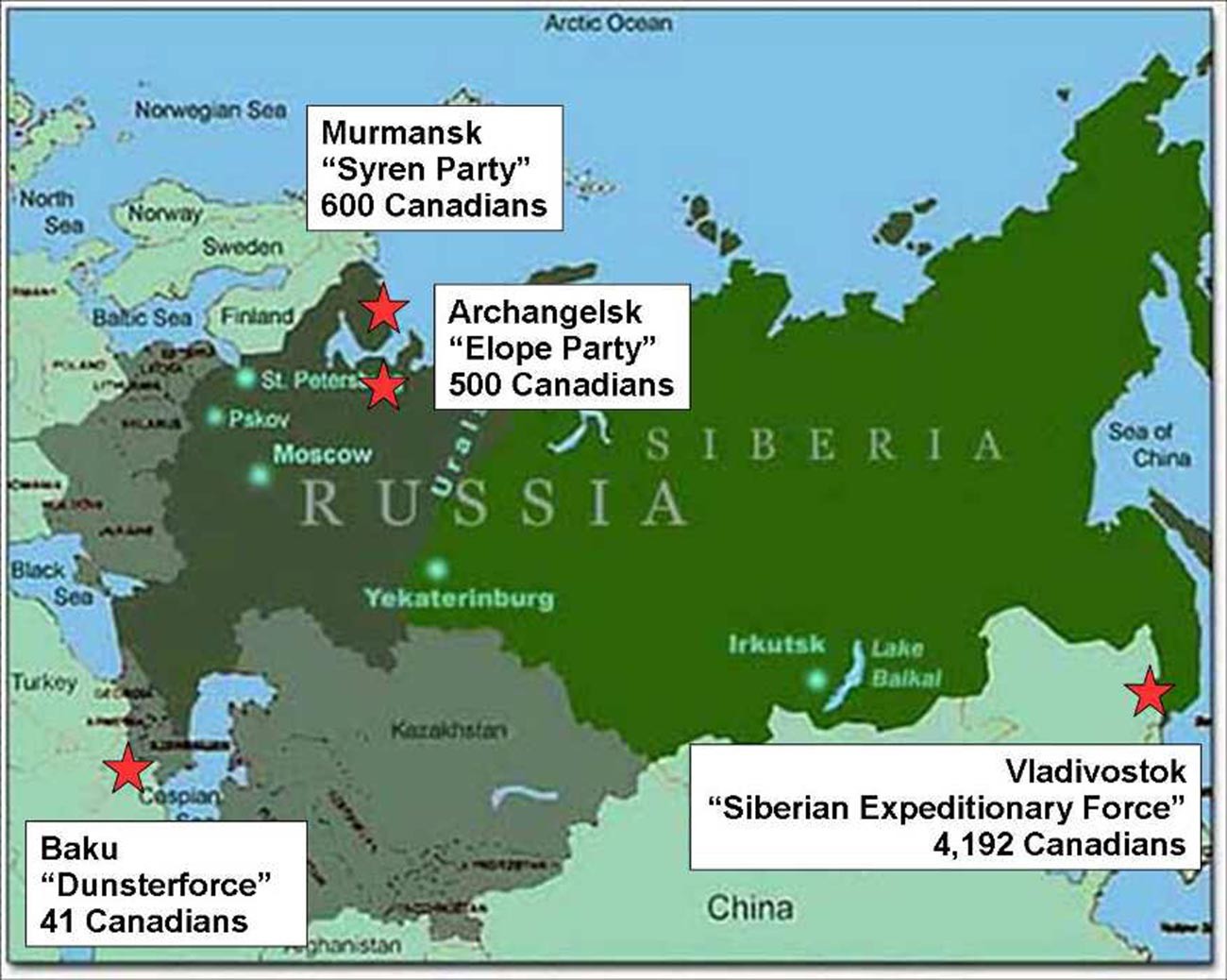 World War I, which had only just finished, had taken the lives of 45,400 Canadians. There weren’t enough volunteers left to fight, and in 1917, the Canadian government instituted the draft.

Russia, meanwhile, was hit by two consecutive revolutions: the anti-bourgeois Russian Revolution of February 1917, and then another - in October. Russia’s Entente allies - as well as other countries, including Japan - had decided to move their troops into what had then only recently been the Russian Empire. Canada was among them as well, having been a British ally.

Why were the Canadian troops sent to Vladivostok? 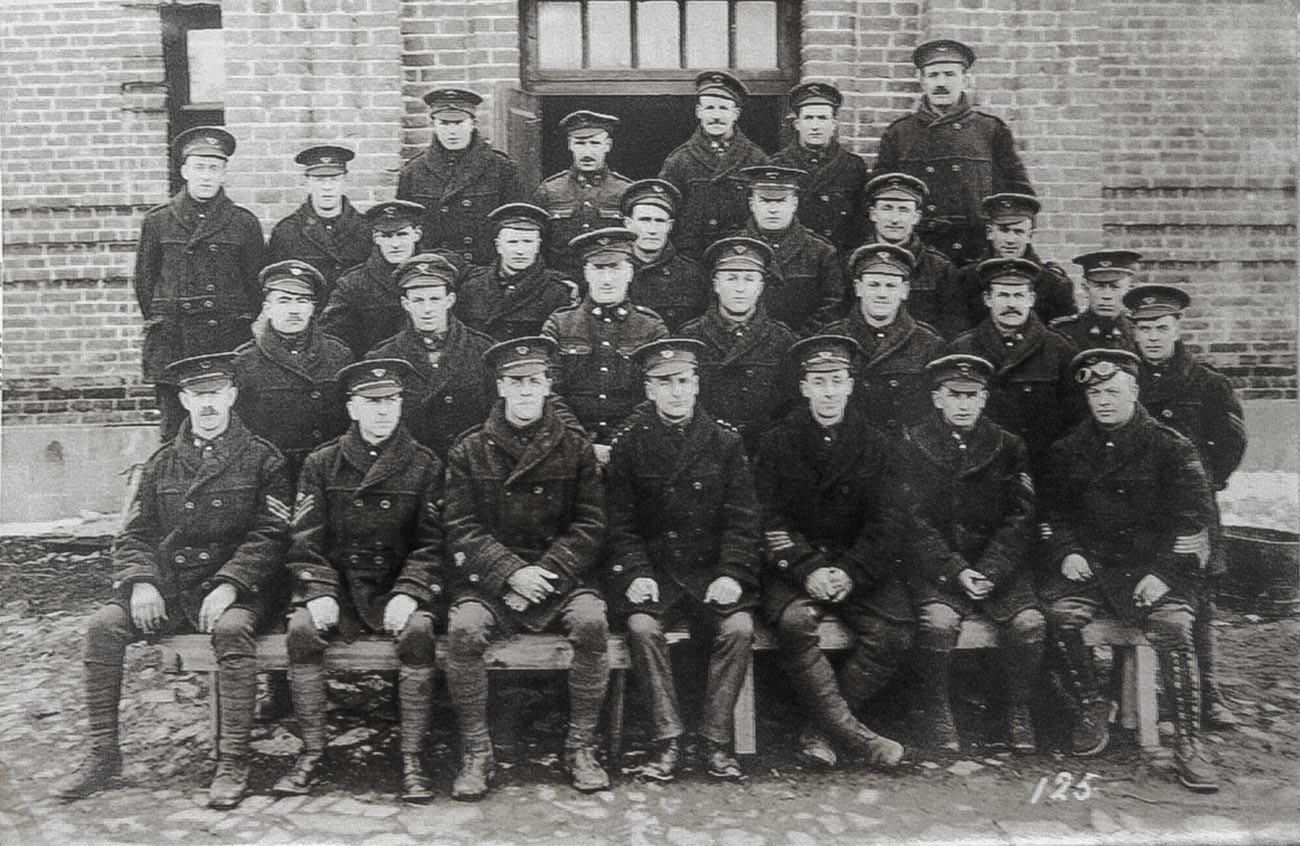 Canadian troops in the barracks in Victoria, Canada

Immediately after the October Revolution, which ended the tsarist regime and brought the Bolsheviks to power, the new Soviet government issued the Decree on Peace (November 8th, 1917), offering all warring countries to start peace negotiations. However, only the Russian Empire’s enemies, the so-called Central Powers (Germany, Austria, Ottoman Empire and Bulgarian tsardom) answered favorably to this suggestion – Russia’s allies, first of all England and France, hoped to restore the Russian Empire, so it could continue the war against the Central Powers.

In December 1917 in Paris, representatives of England and France decided to mark the ‘spheres of interest’ on the territory of the former Russian Empire. However, officially, they hesitated to openly declare war on the Soviet State. But after the Brest-Litovsk treaty between Bolshevik Russia and the Central Powers (March 3, 1918), the Allies decided to start an open intervention. Canada, as Great Britain’s ally, had to play its part as well, however small in the scope of events.

READ MORE: How foreign troops intervened in Russia in 1918

The Victoria riot, sparked by two volunteer companies, was quickly put out by loyal higher-ranking officers and soldiers. The rioting volunteers were literally coerced onto the ship with whips and gunfire. The boarding took 23 hours, with the drafted men put in chains.

They spent three weeks this way, chained up in their water prison.

The Canadian expeditionary force numbered about 4,200 men. Aside from Vladivostok, soldiers were also dispatched to Murmansk (500 men) and Arkhangelsk (600 men). Canada became one of the leading contributing forces in the conflict.

Arriving and settling in

The first company arrived in October 1918, with the larger main part of the forces following on January 15, 1919, their ships docking in Vladivostok’s Zolotoy Rog (also known as the Golden Horn Bay).

The captain - as well as the chief physician, Eric Elkington - used the following words to describe his impressions on arrival in a 1980 interview:

“The setting of the town of Vladivostok was indeed beautiful, seen from the boat in the early morning. The city follows the half moon curve of the bay and seems to be far greater in length than in breadth. Behind the town were low snow covered hills above which the sun was just rising. We could make out several substantial and well built looking buildings one of which was evidently a Greek church with a large golden dome flashing in the early morning sun.”

Vladivostok gave the Canadians a relatively calm reception, save for the fact that they set up camp at the lavish building of the Pushkin Theater. The Canadian corps tried to reassure the locals that the arrangement was a temporary one, and the public calmed down. 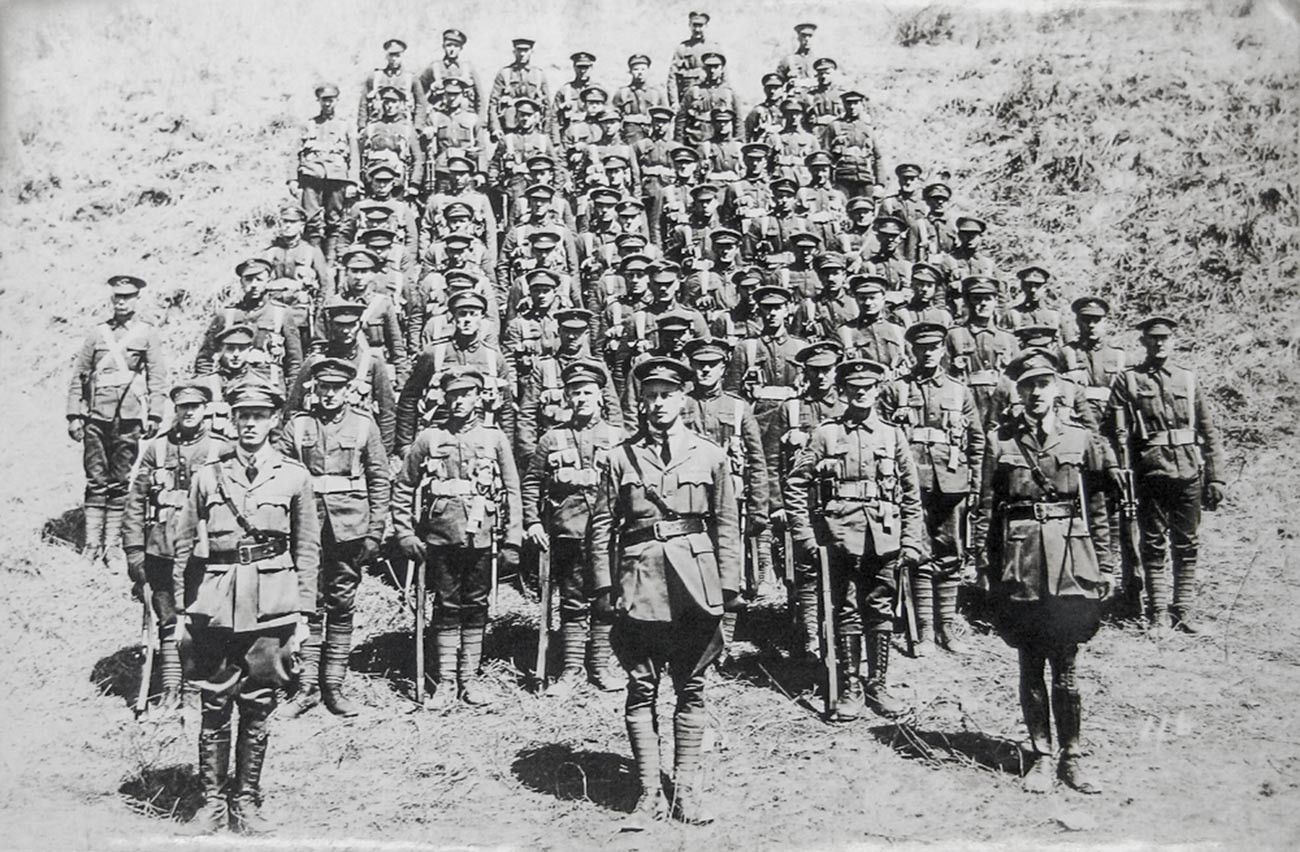 It wasn’t just politics that kept the Canadians there. There were economic reasons, too. In winter 1918-1919, a branch of the Royal Bank of Canada opened in Vladivostok. Five businessmen arrived in Russia around the same time to establish the Canadian Economic Commission to Siberia. However, there wasn’t much use for it - its functioning having been severely impeded by the Civil War. 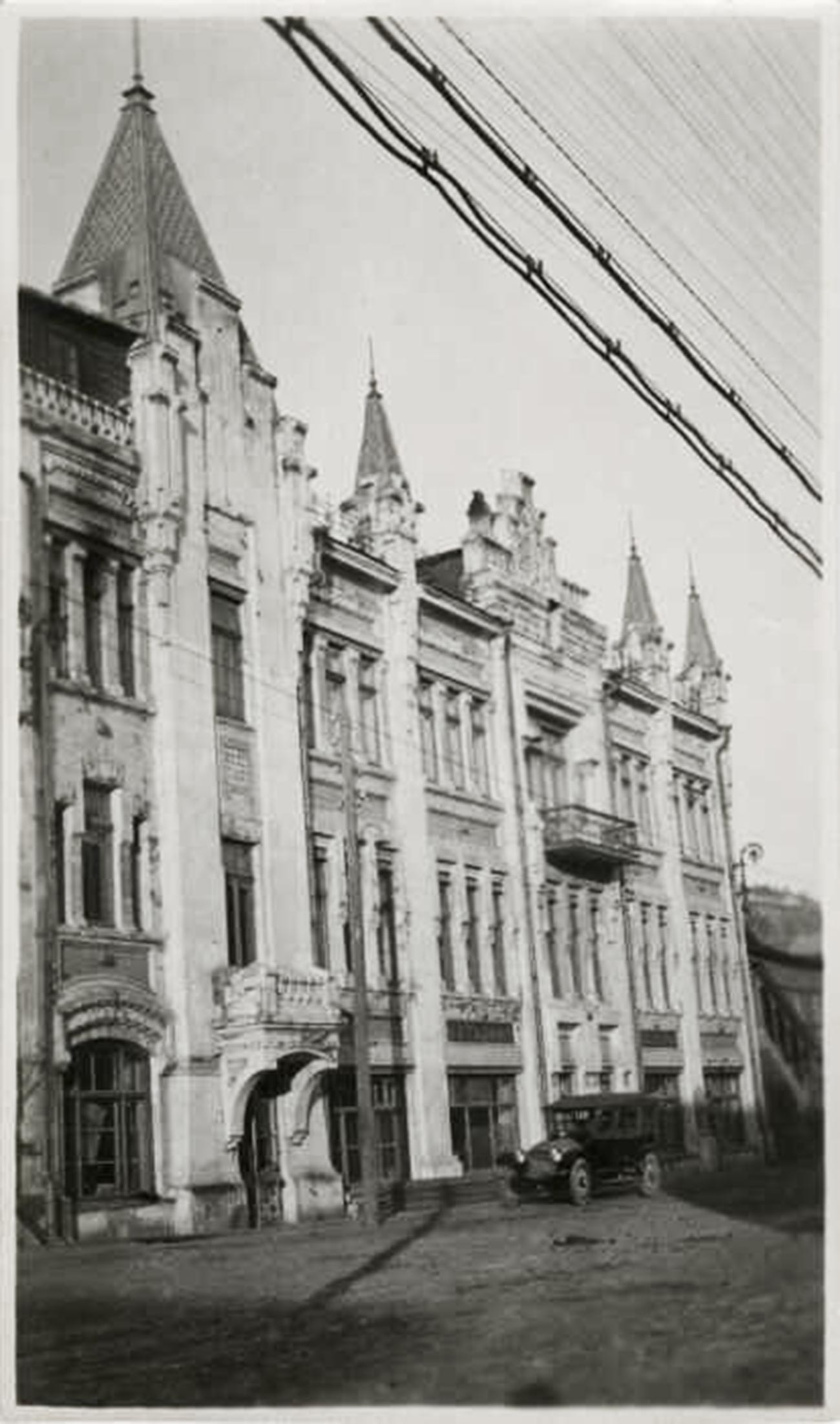 Canadians sent to Vladivostok to aid the White army, loyal to the monarchy, set up a training camp for it on Island Russkiy, as well as a hospital.

Vladivostok at the dawn of the 20th century

The Canadians noticed that around a third of the population of Vladivostok was asiatic, with Chinese, Koreans and Japanese making up the bulk. 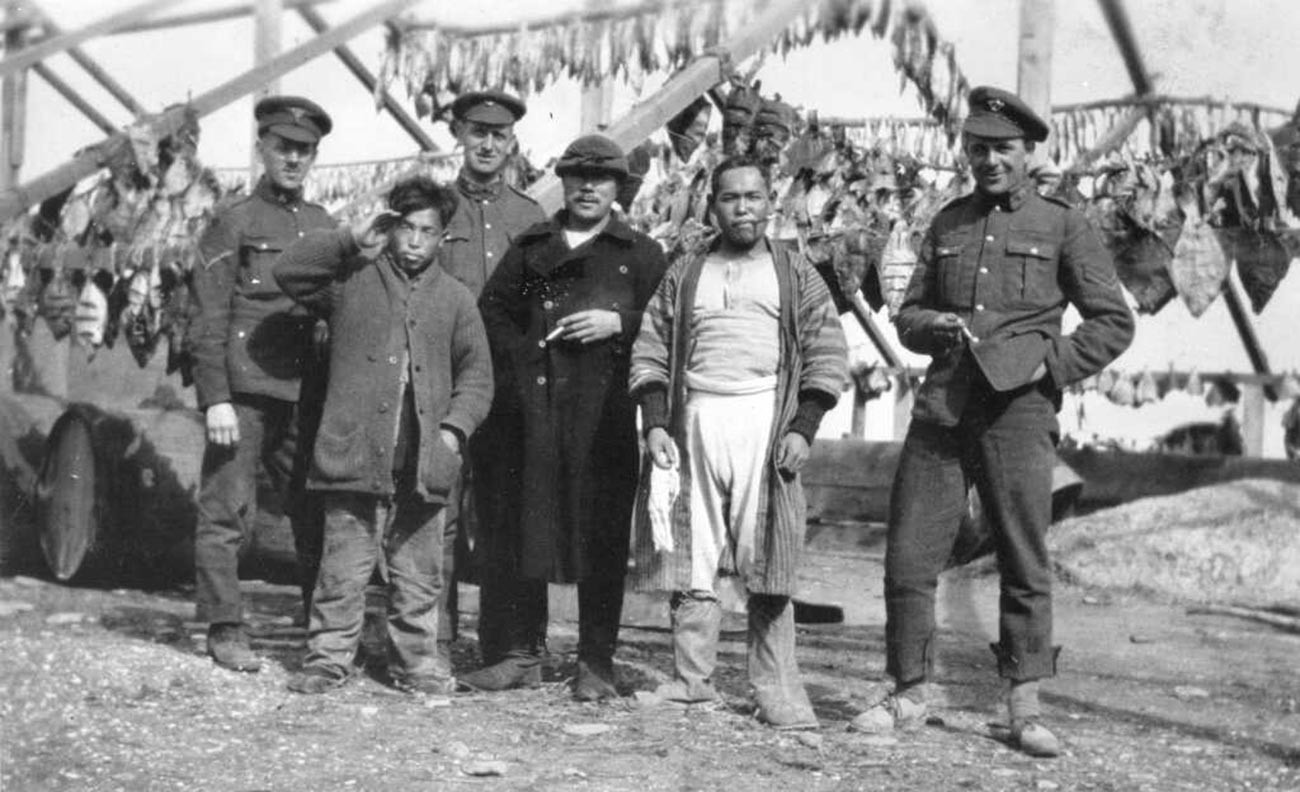 In general, the Vladivostok of that era presented a colorful picture. On the one hand, it was a city bustling with life, with trams and street shows a frequent sight. On the other, the city was rife with crime. All of that was set against the backdrop of the ‘Spanish flu’, which ended up claiming anywhere from 50 to 100 million lives worldwide. The pandemic only compounded the local typhus outbreak.

“That was a tough place, Vladivostok,” Elkington revealed. “It was wintertime and there were always people getting killed or shot in the streets.” Among other things, he bore witness to a bank robbery, resulting in the death of the security guard. 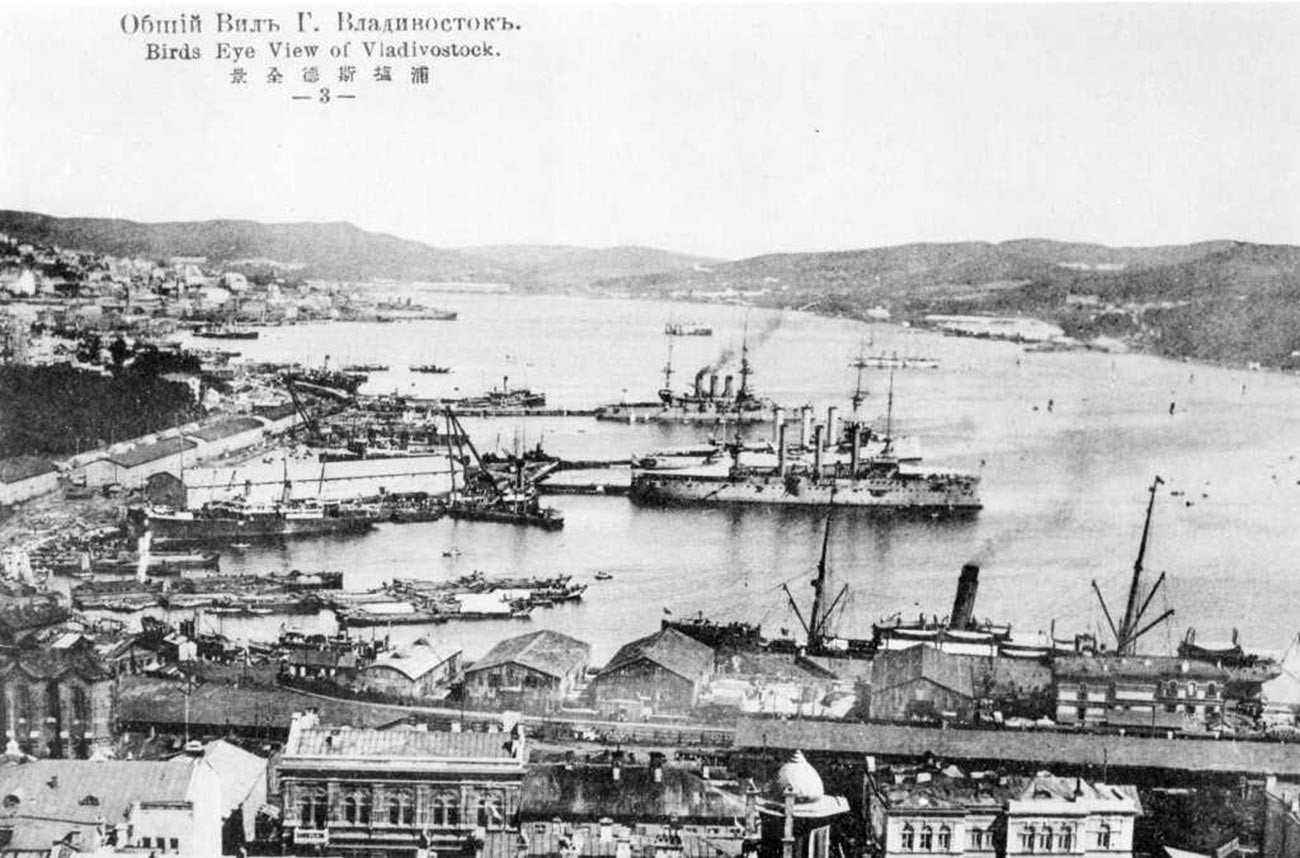 The city train station was a terrible sight, according to his story.

“The Trans-Siberian railway station in Vladivostok was full of thousands of starving refugees. Literally starving. They had a little area on the floor and they all had fled from the Bolsheviks. Well, we did what we could. We took some supplies, what we could. I can always remember having a loaf of bread, and a woman came rushing up, and I gave it to her, and she had the most starving looking baby you ever saw in your life.

“...There were an old general and his wife, living in this used railway carriage. And they were selling what things they’d managed to escape with their life, which was a tea and coffee service, all in gold. And they’d sell a cup, and then a plate. And I said to this old general, ‘What’s going to happen when you’ve sold all that?’ ‘We will just die,’ he said. ‘We will just die.’”

“I suppose that was the most tragic scene. I’ve seen a great many tragic scenes in various parts of the world, but that — Vladivostok — was the worst.” 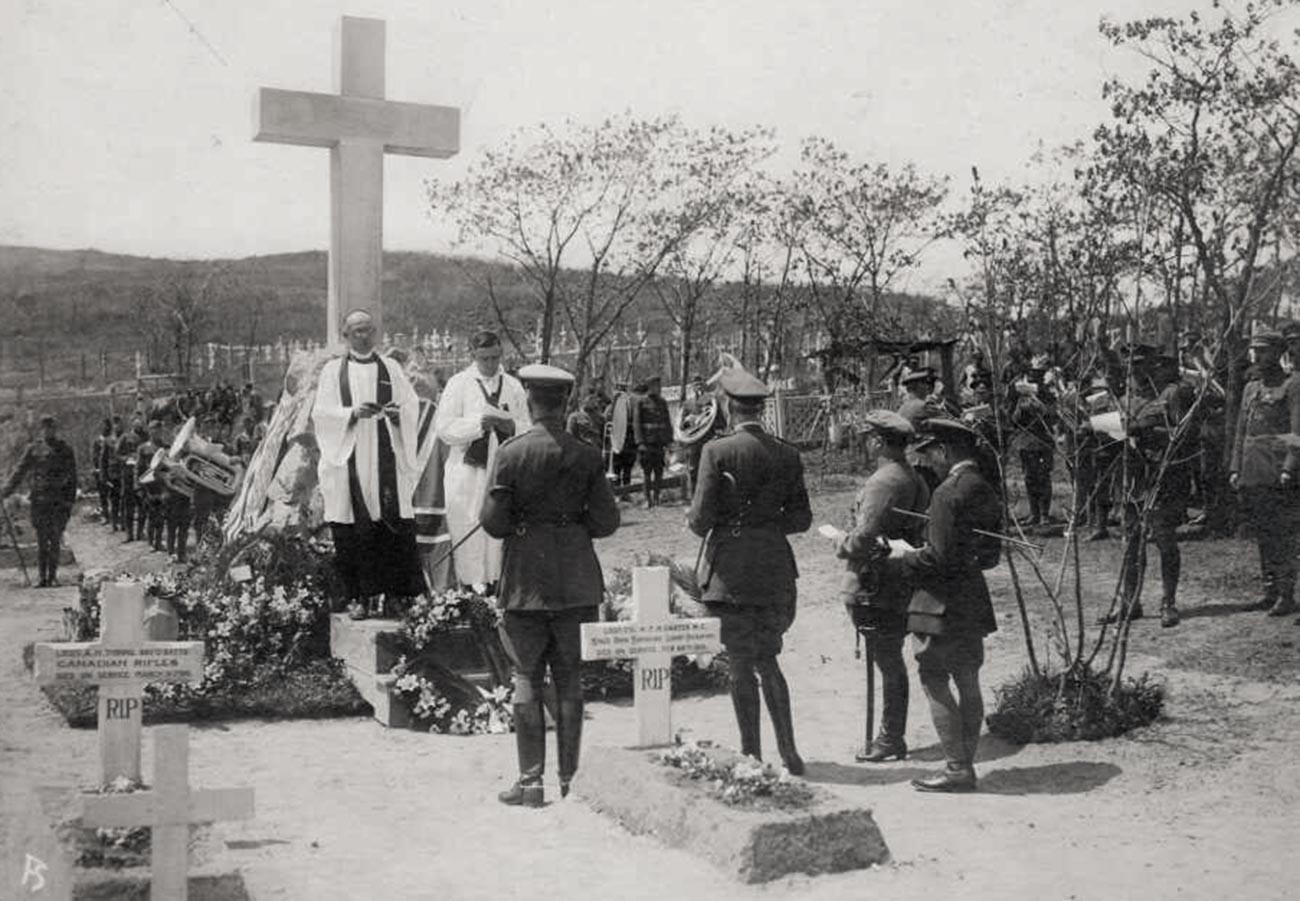 In the spring of 1919, the Canadian command decided to recall their troops and bring the expedition home. Locals in Vladivostok had become really tired and worn out by the prolonged presence of foreign troops in the city. Aside from that, back home in Canada, the mood was starting to increasingly be that of opposition to the military campaign. 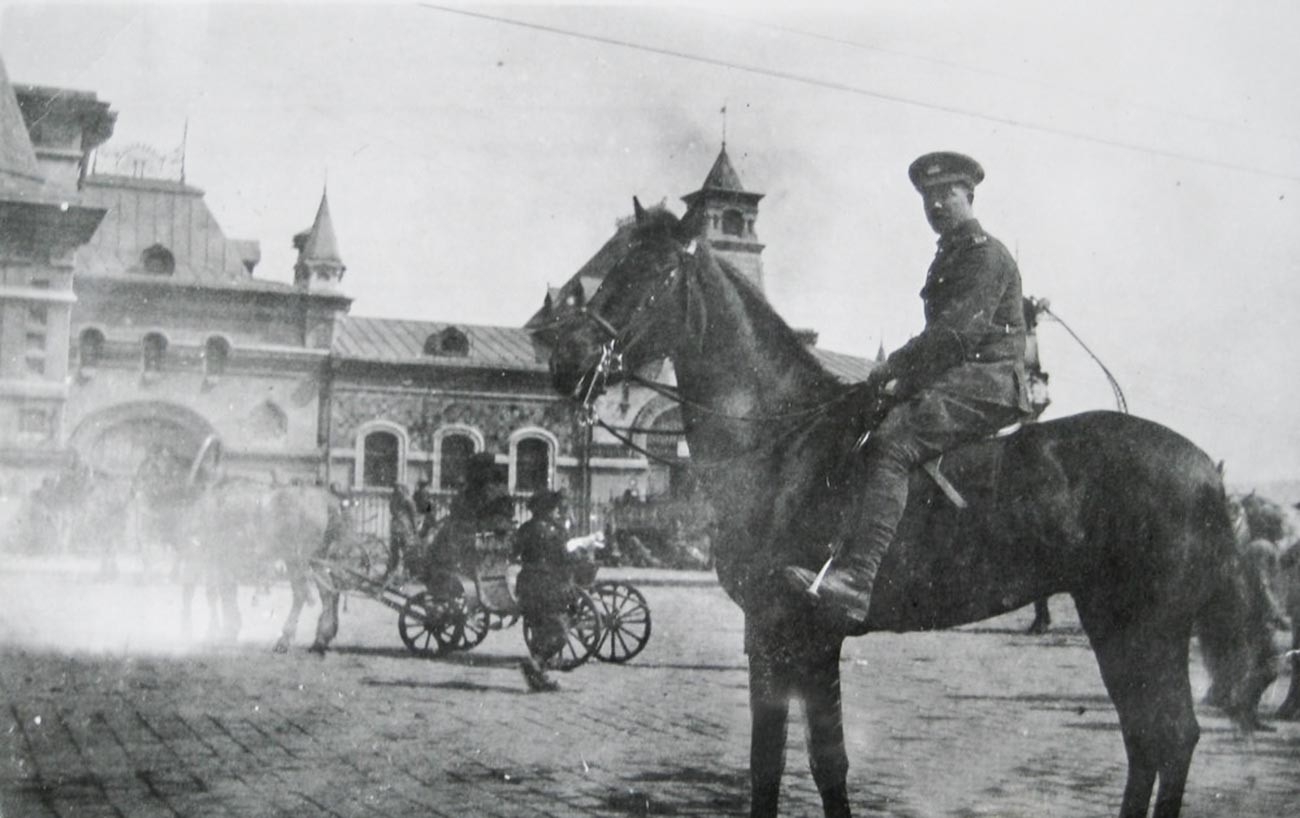 “The labour councils of Canada's four largest cities — Vancouver, Winnipeg, Toronto, and Montreal — went on record opposing the Siberian Expedition. They were joined by farmer organizations including the United Farmers of Ontario and the Mount Hope Grain Growers Association in Saskatchewan.”

Before sailing off, the Canadian forces installed a memorial plaque at Vladivostok’s maritime cemetery, in honor of the 14 Canadians who perished in the expedition. Most of them from disease, with one having taken his own life. 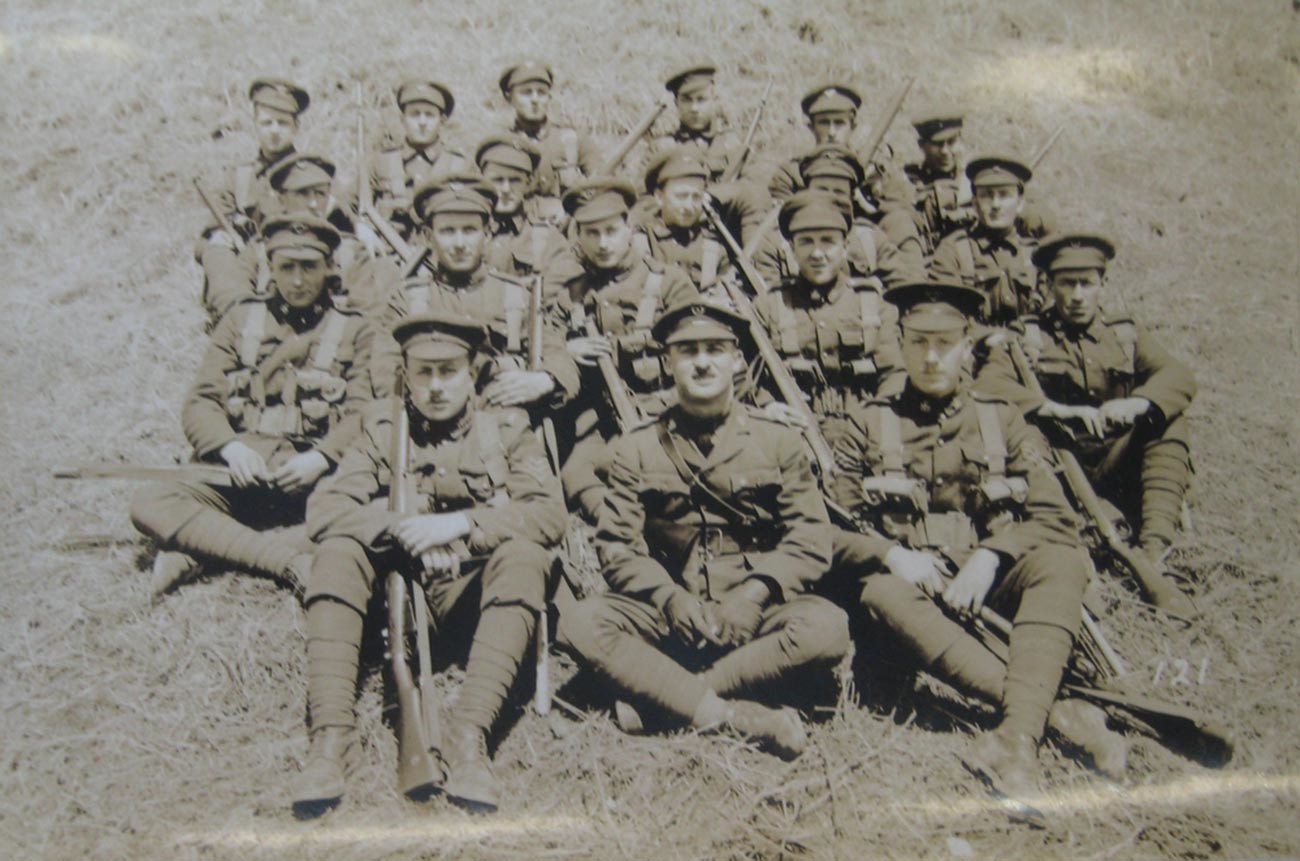 The Canadian troops at Gornostay Bay, Russia, where they would live for the duration of the mission.

This controversial page in Russian-Canadian history ended in June 1919, with the Canadian departure. It has nearly been forgotten in both countries in the years since.

The soldiers that ignited the Victoria riot were eventually pardoned.