What was the GULAG? 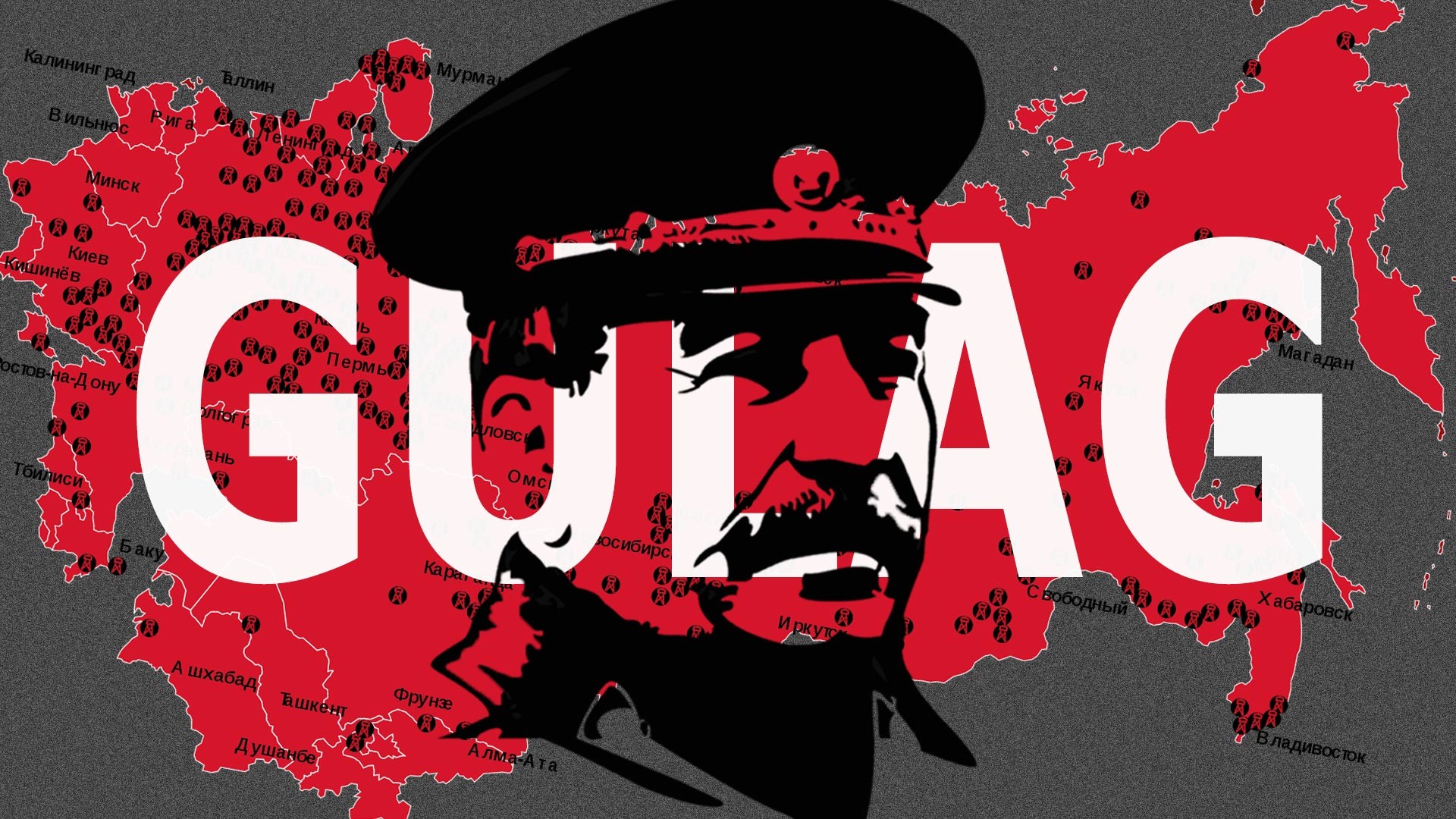 Archive photo;Antonu(CC BY-SA 3.0); Russia Beyond
To describe the Soviet penal system, Alexander Solzhenitsyn, who survived eight years of Gulag incarceration, wrote a massive book titled ‘Archipelago Gulag’ after collecting hundreds of memoirs of other people who managed to outlive the labor camps. We dare to give you a short explanation of this awful page in Soviet history.

GULAG - what does it mean?

Soviet people commonly used the word лагеря (lagerya; “camps”) to refer to the penal system, as the word ‘Gulag’ in fact means the management of the labor camps. ‘GULag’ is the correct spelling of the acronym for Главное управление лагерей (Glavnoye Upravleniye Lagerei; “Main Directorate of Camps”). But this abbreviation became a frequently used name for the camps themselves, most likely after Solzhenitsyn’s Archipelago Gulag was published and popularized. 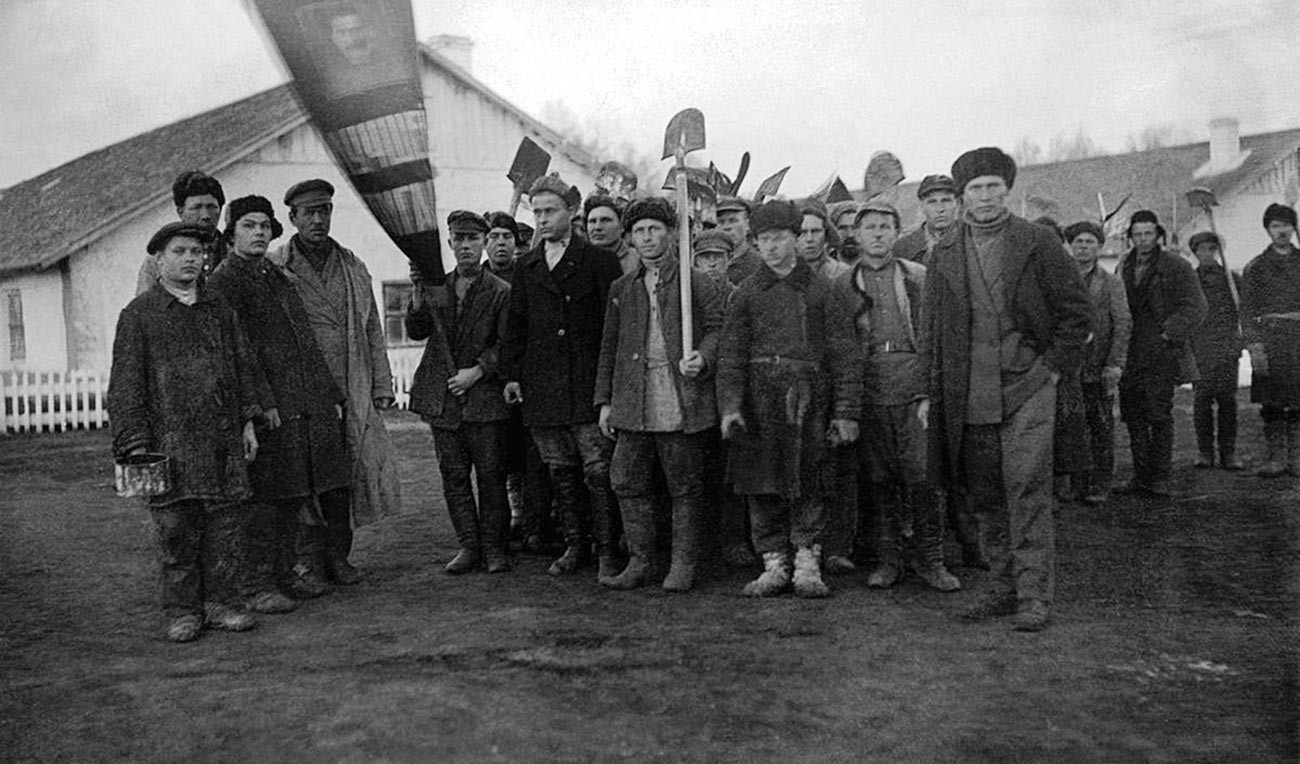 A group of prisoners working on construction sites

The structure was formed in the 1930s as a department of the ministry called ‘The People’s Commissariat for Internal Affairs’, or NKVD in short, another terrifying abbreviation of the Soviet time. But the first camps appeared even before ‘Gulag’ was created. 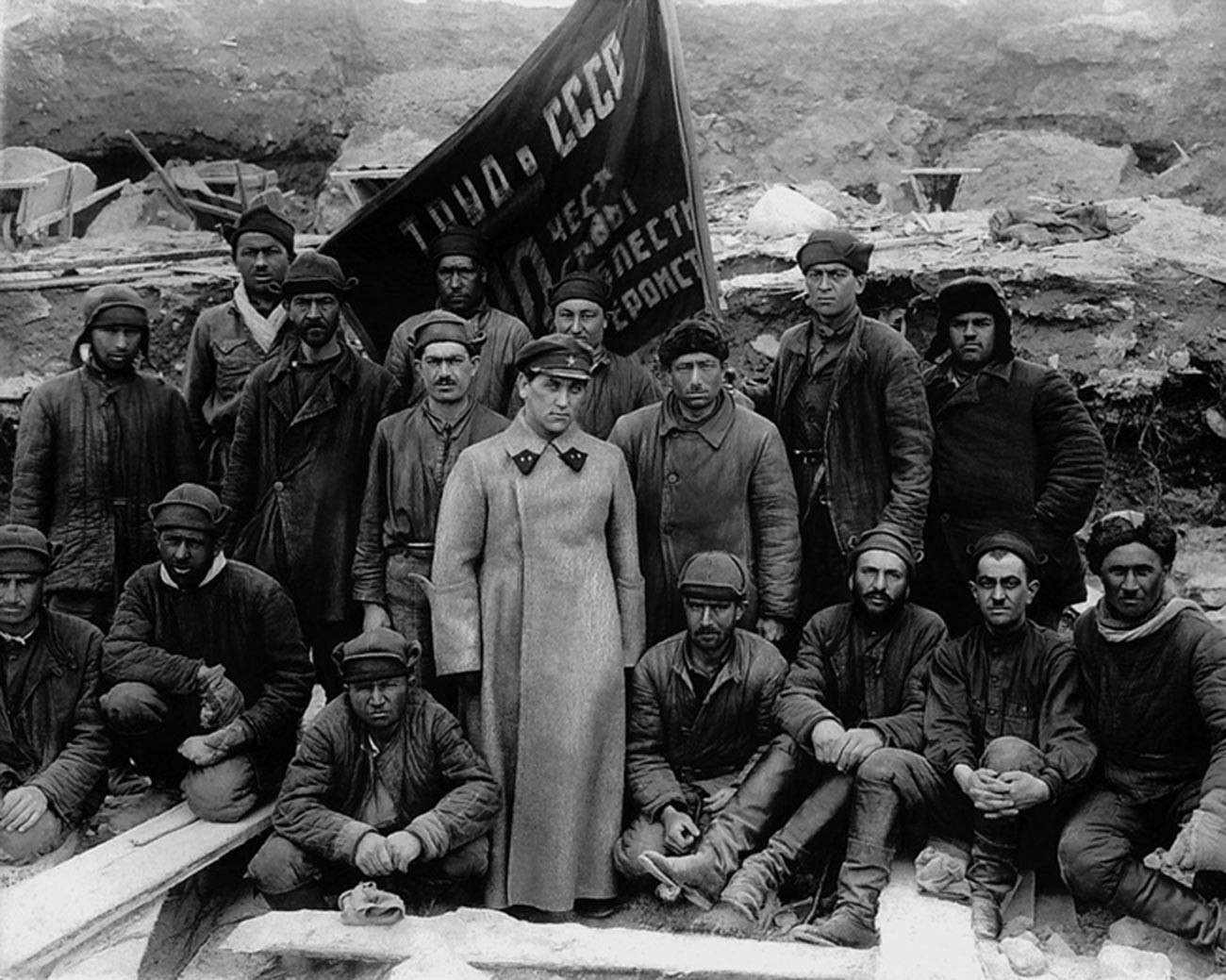 A group of prisoners and their NKVD officer

When did it work and for how long?

The first camps appeared in Russia after the Revolution of 1917. The Bolsheviks decided to get rid of all their enemies and gather them in one place. The most “convenient” venues for their goal were monasteries. Surrounded by big walls and having many small rooms, they were ready-made prisons.

The Solovetsky monastery was among the first to be turned into a camp. Situated on the Solovetsky archipelago in the White Sea in Russia’s north, it was far away from civilization and impossible to escape from. 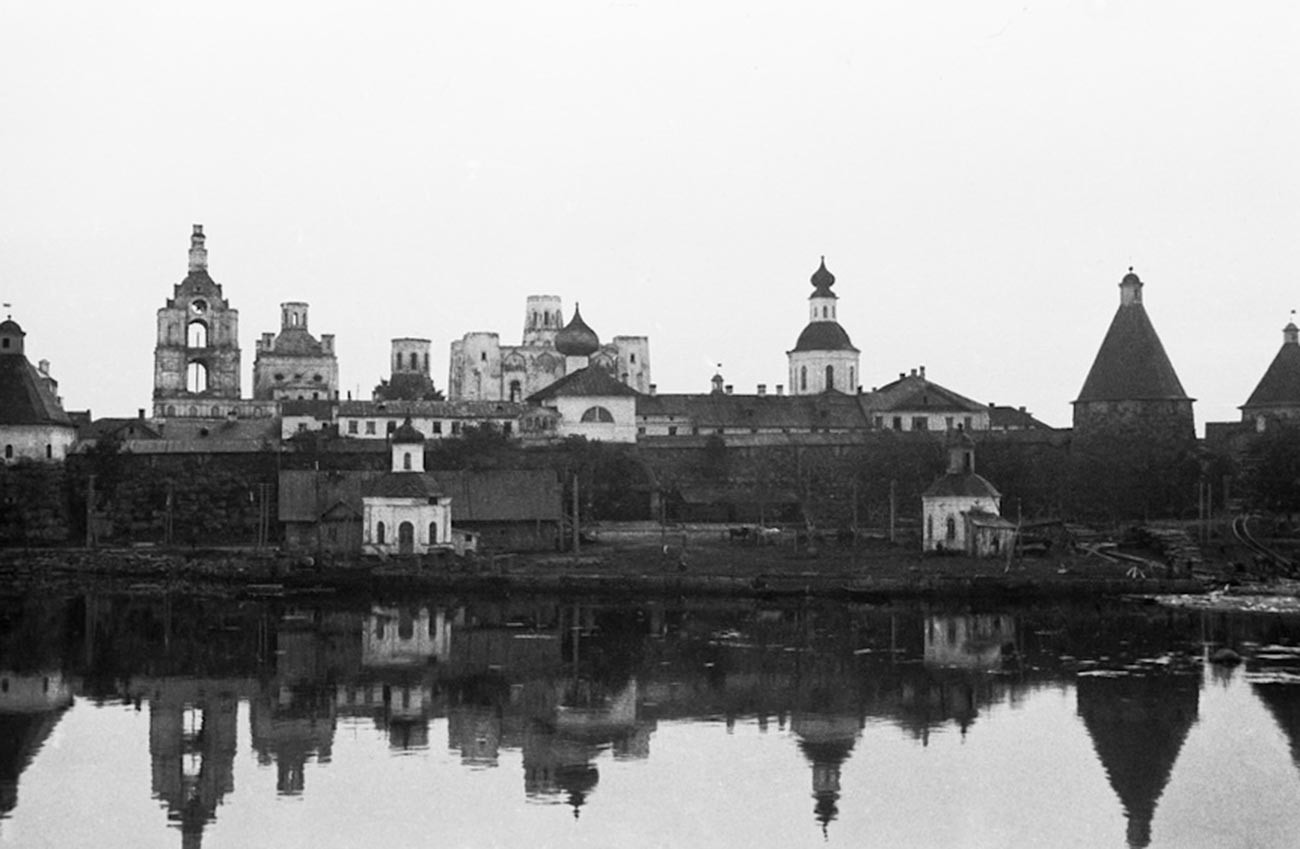 Solovetsky monastery that housed one of the first Gulag camps

When Stalin strengthened his power in the early 1930s, he implemented the principle of “correcting” people via labor, so prison camps turned into forced labor camps. And then a former entrepreneur - and a former Solovetsky prisoner himself - Naftaly Frenkel, came up with a system to effectively use prisoners as free labor. It required the expansion of the camps and getting many more prisoners to work.

The camps were working up to 1956, having survived Stalin by three years. After his death, there was a massive amnesty, but still many people remained in camps.

How many Gulag camps were there in the USSR?

The monstrous Gulag structure included about 30,000 places of detention throughout its history. When some of them closed down, others immediately appeared in other places all over the country. Camps had different economical and industrial goals. Each direction was headed by a separate office (there were about 50 of them) with a complicated managing system and gathered several camps under one leadership. 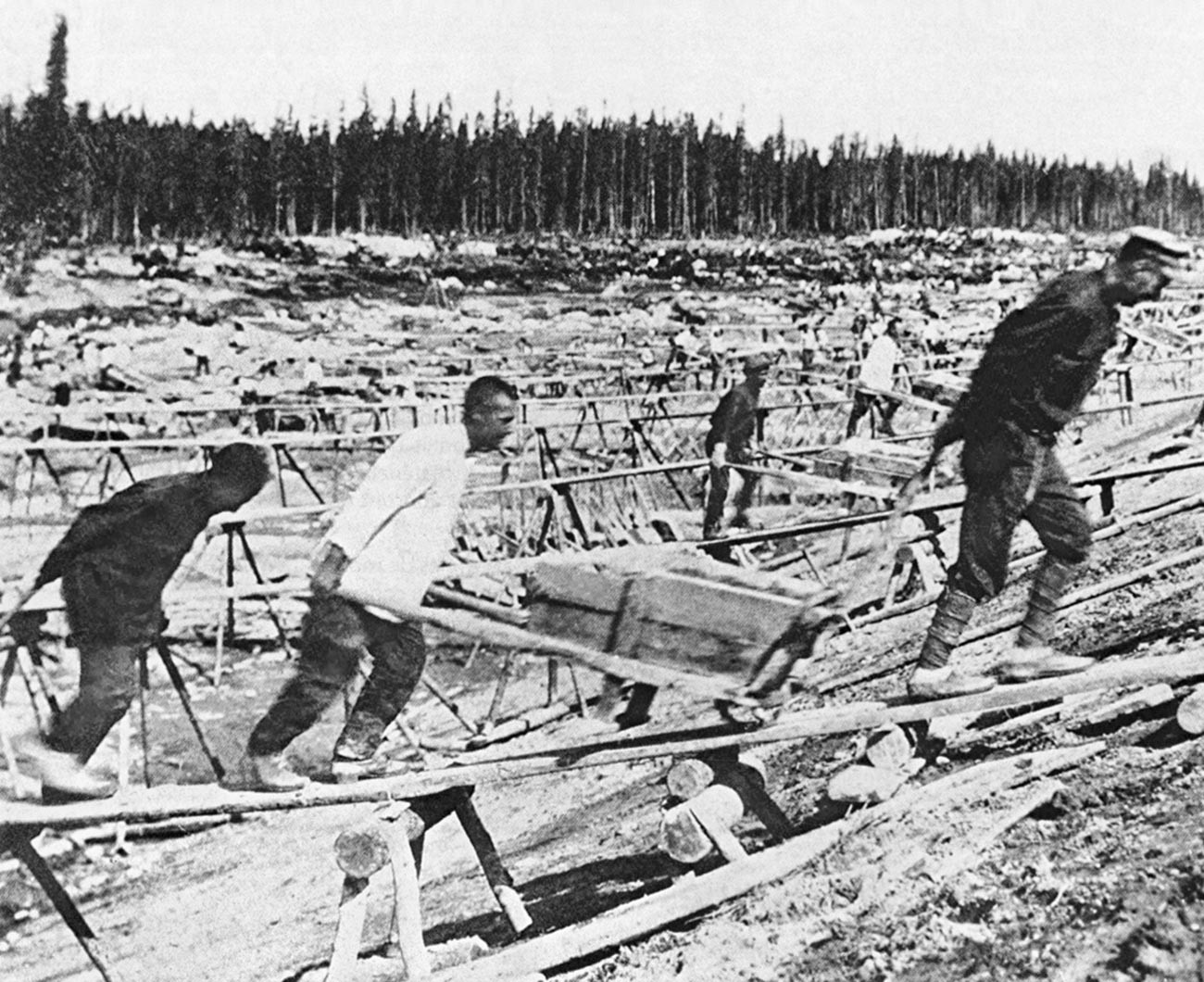 For example, the first massive building project completed by the Gulag inmates was the White Sea–Baltic Canal. The construction was headed by the Belomorsko-Baltiysky camp department. Many camps later began to appear in the Far East. The infamous Kolyma camps were responsible for building the infrastructure, mining for ore and even the testing of dangerous radioactive materials.

Other camps were busy with construction works, logging, fishing, sewing, agriculture, shoe making and many other productions. The camps kept working during World War II, supplying the Red Army.

Read more about eight of the most EVIL Gulag camps here.

How many people were sent to the Gulag?

According to statistics of the Gulag History Museum, more than 20 million prisoners were held in the camps from the 1920s to the 1950s. In total, more than 1 million people died there. The biggest number of prisoners was in 1941 - about 1.5 million people, while there were more than 1.7 million in 1952 and 1953. 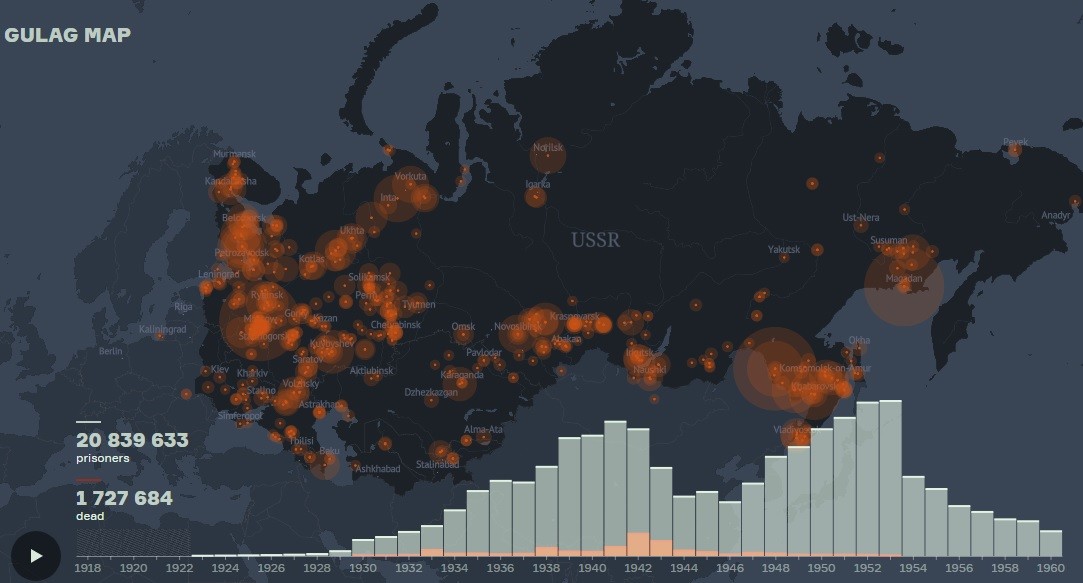 According to different sources, these people accounted for 10 percent of the whole Soviet economy. For example, 70 percent of all the tin in the USSR was mined by Gulag prisoners. Such Siberian and Far Eastern cities as Vorkuta, Magadan, Komsomolsk-on-Amur were founded on the places of former Gulag camps by the prisoners. After they were set free, many of them remained there. 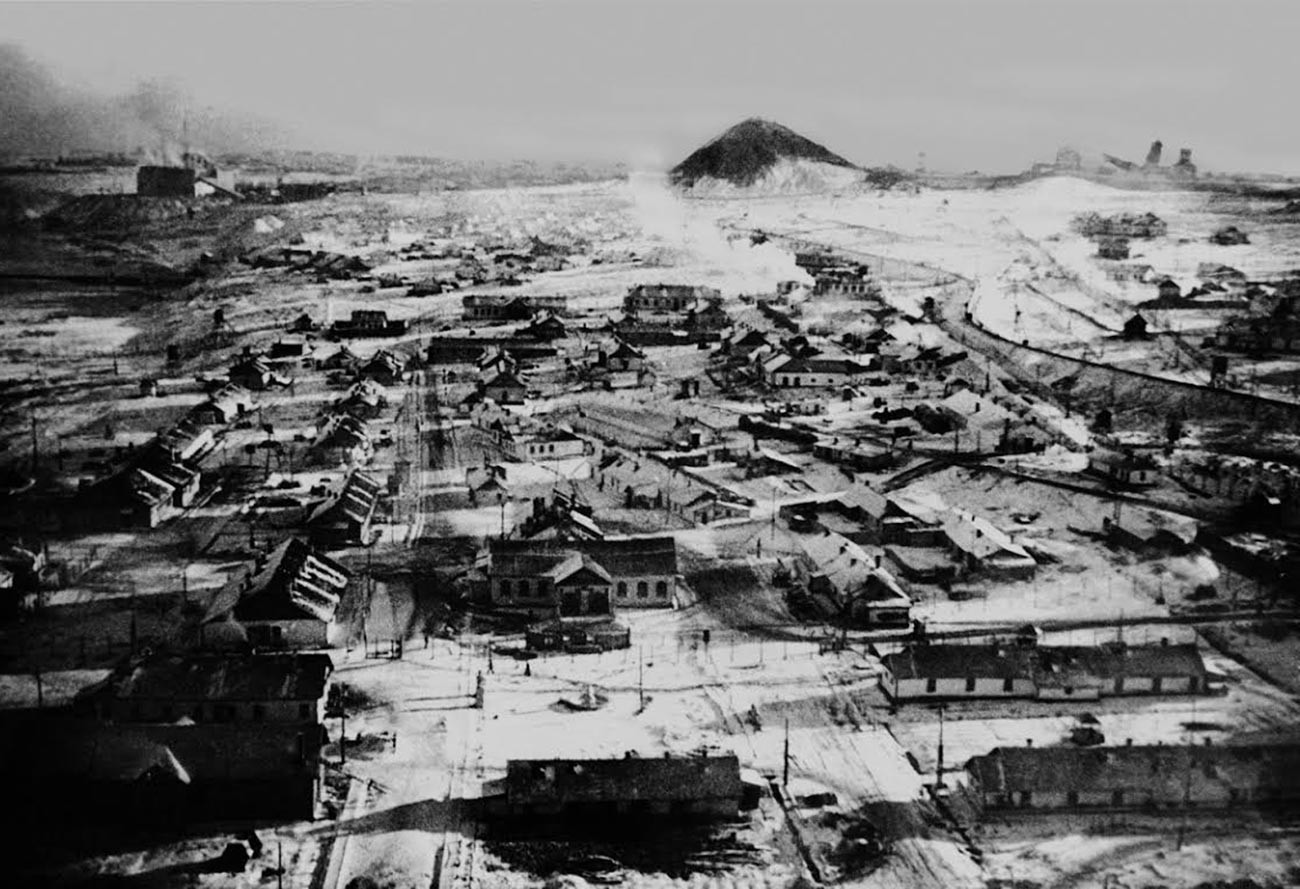 The Vorkuta camp complex was located 160km above the Arctic Circle. The city had a population of approximately 15,000 and about 50 camps with more than 50,000 inmates

Neither fame nor awards or a special status could guarantee protection from the Gulag. Among the prisoners were writers, army commanders, Communist party leaders, famous scientists and engineers (here’s a list of those you might know). There were even special prison research facilities where they kept developing successful projects (read more about them here.) At the same time, most of the Gulag managers ended up being prisoners of their own structure.

Why would they send people to the Gulag?

After the Revolution, the Bolsheviks arrested members of opposing political parties, people of noble origins, scientists, representatives of intelligentsia, priests, officers, rich peasants and many others.

During Stalin’s great purge, he got rid of all kinds of “public enemies”, from former rich peasants and those who could potentially have ties with them. In the late 1920s, the Soviet Penal Code adopted Article 58, which included a lot of points: treason, anti-Soviet propaganda, espionage etc. Over 3 million people were sentenced under this article alone. Read more about the scale of Stalin’s repressions here. 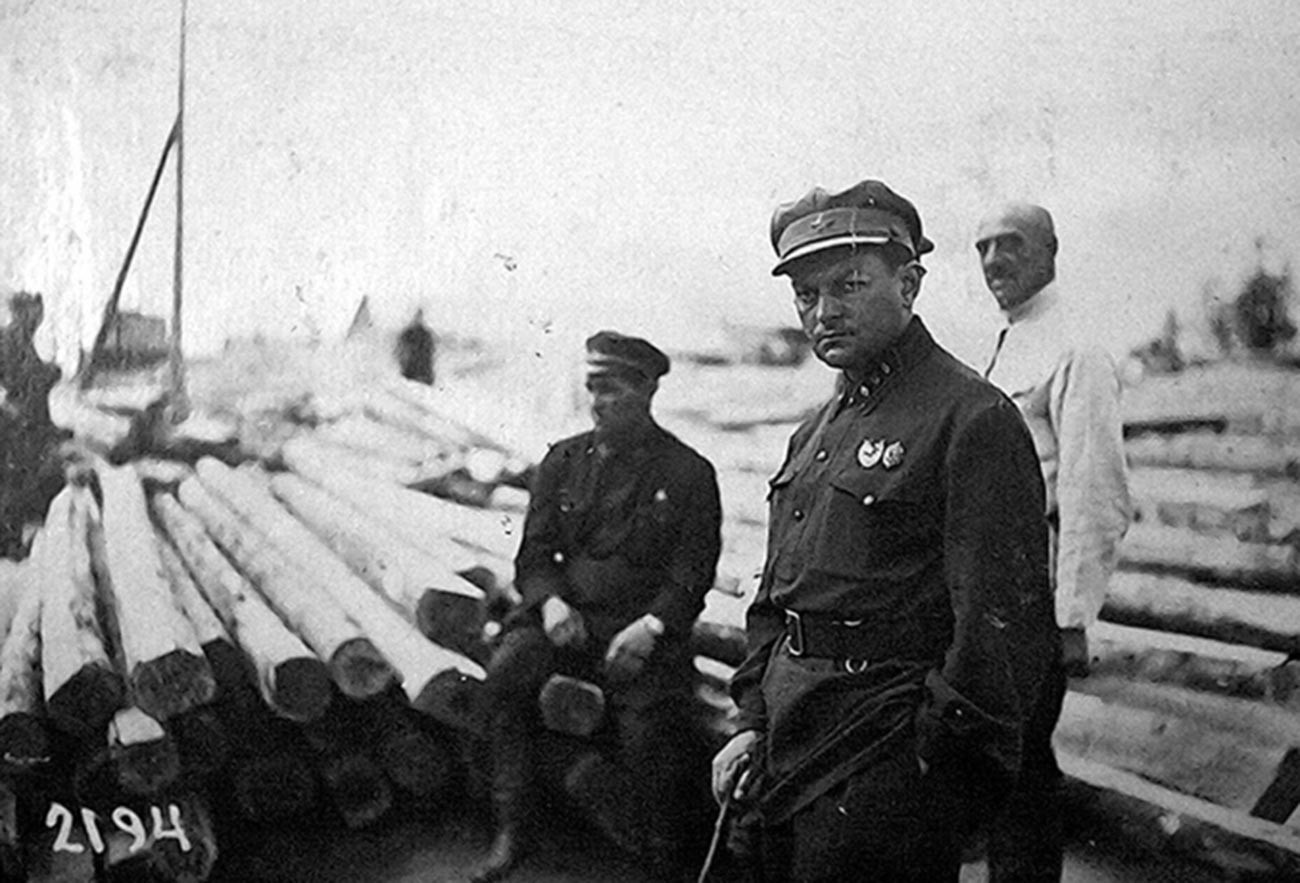 Even an inconsiderate joke could cost people freedom (here are some of them). Eugenia Ginzburg spent twenty years in camps and in her book Journey into the Whirlwind she recalls a prison inmate, 28-year-old Muscovite Anna, who was arrested and taken to prison right from her bed. At first, she didn’t understand the reason for her arrest. “So, what was it for, what do you think? Jokes! [I told someone] Two [political] jokes. And they want to jail me for seven years, three and a half for each of them,” Ginzburg quoted Anna.

Moreover, relatives and children of jailed people could very likely be arrested as well. Certain prisoners’ kids were also sent to the Gulag, while children who were born there were separated from their parents. Many of those people faced grim destinies. Read more why the Soviets sent kids to the Gulag and what happened to them. 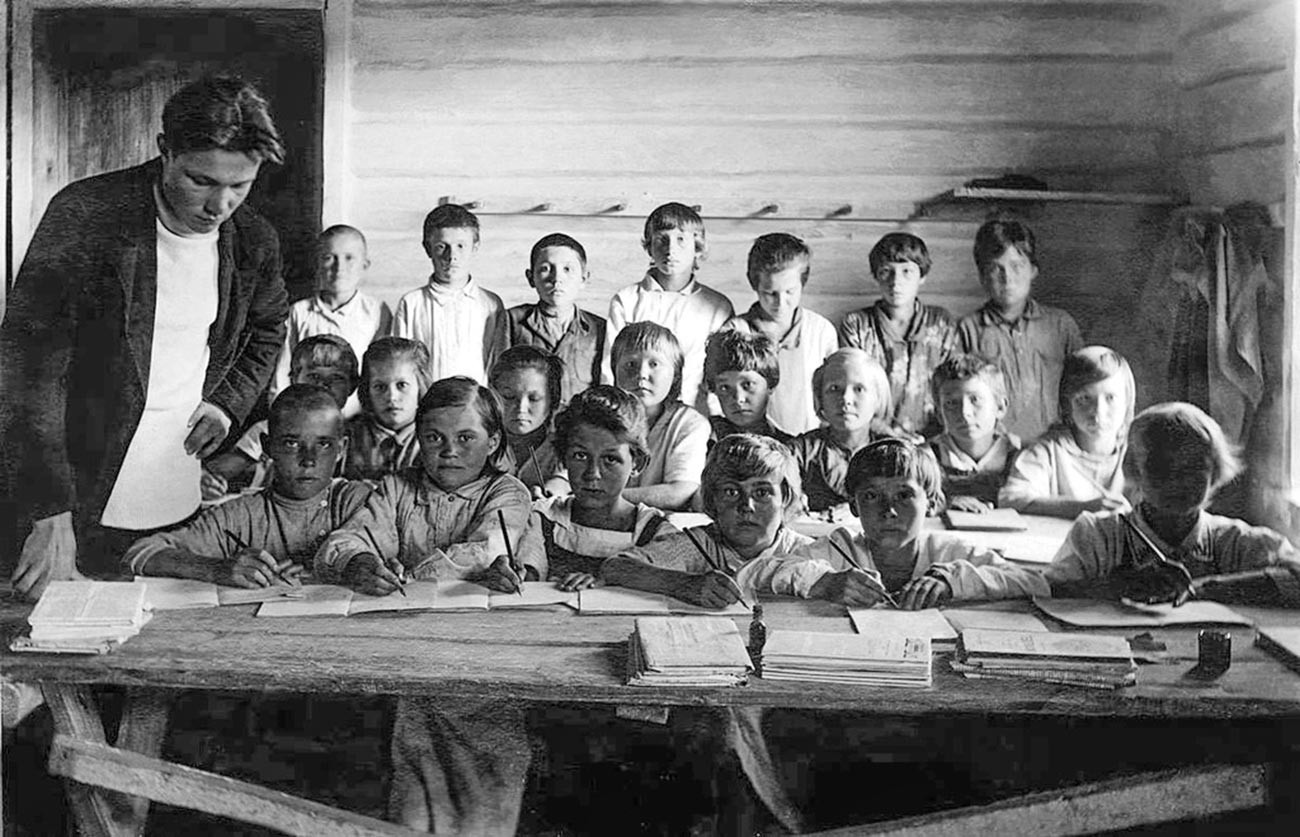 School students in a special settlement in the Urals

However, not only ‘political’ prisoners were sent to the Gulag. Regular criminals were also sentenced to time at labor camps and professors frequently shared barracks with murderers, thieves and other serious offenders who had their own unfair rules of surviving in prison, which in turn made the lives of others even worse.

Why was Gulag so awful?

“We were all tired of barracks food. Each time they brought in the soup in large zinc tubs suspended on poles, it made us all want to cry. We were ready to cry for fear that the soup would be thin. And when a miracle occurred and the soup was thick, we couldn’t believe it and ate it as slowly as possible. But even with thick soup in a warm stomach there remained a sucking pain; we’d been hungry for too long. All human emotions — love, friendship, envy, concern for one’s fellow man, compassion, longing for fame, honesty — had left us with the flesh that had melted from our bodies during these long ‘fasts’.” That’s just one of the terrifying quotes from Varlam Shalamov’s Kolyma Tales he wrote from his own experience. 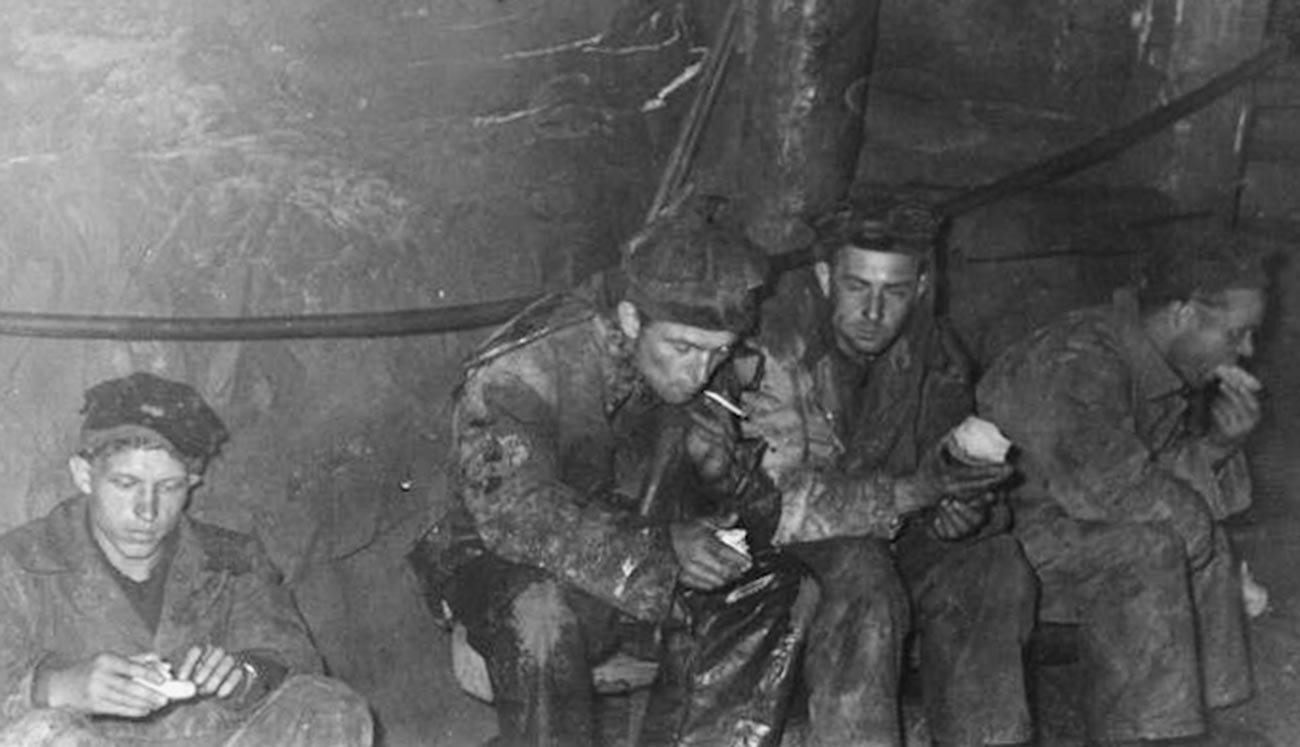 There are several other books about the Gulag and Stalin’s repressions, however most of them were banned in the USSR until perestroika or even the 1990s. We’ve put together some of the most important titles here. The first ever story touching the topic was published in 1962 and it was Solzhenitsyn’s One Day by Ivan Denisovich. 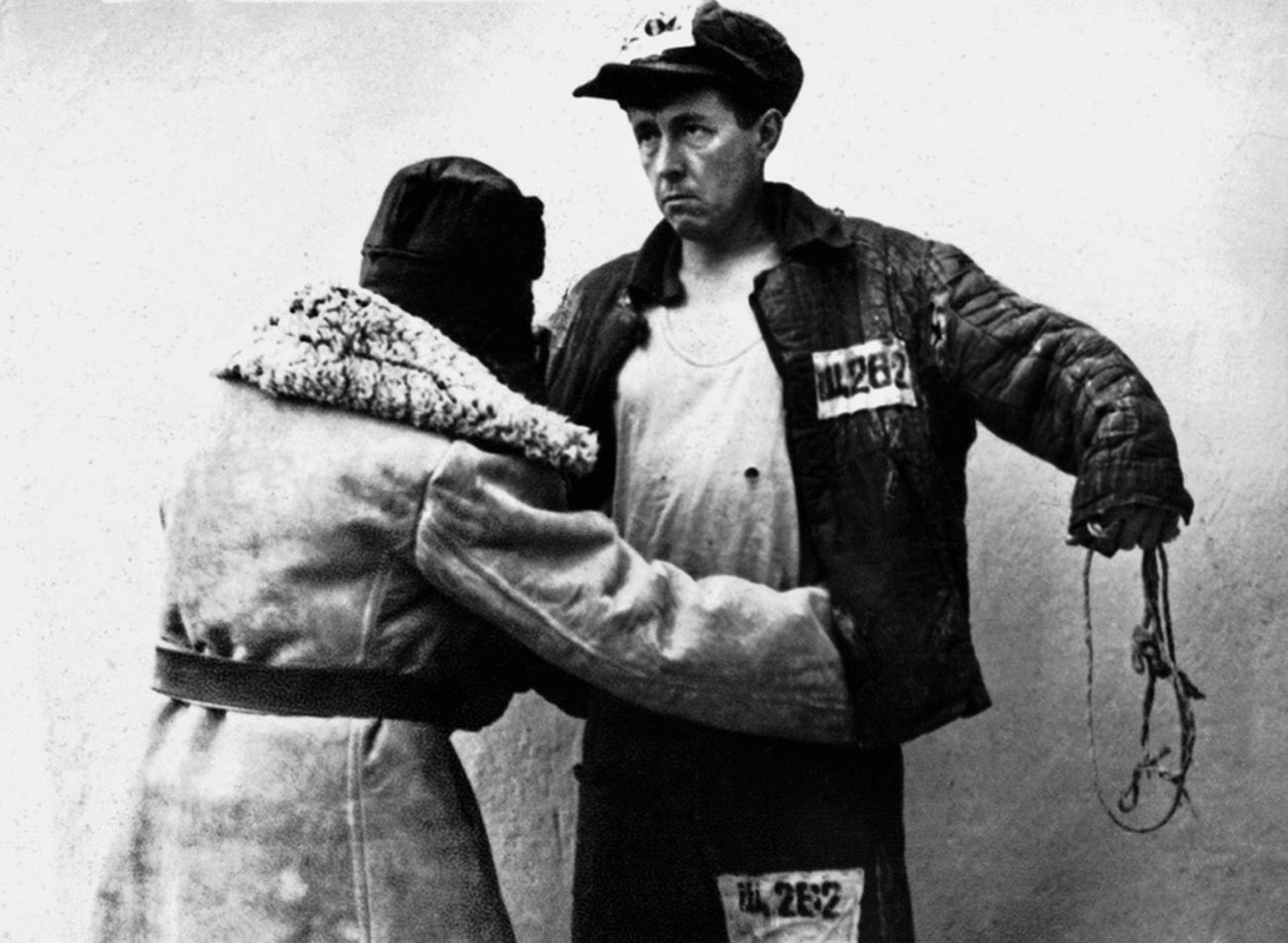 Alexander Solzhenitsyn in the Gulag

The whole country then realised that people in the camps were living in inhuman conditions. The only goal was to survive. Poor food, as Shalamov described it, was accompanied by the extreme cold, as the camps were frequently situated in the north and people were working outside wearing light clothing. Prisoners had to follow a daily plan that was nearly impossible to implement and if one didn’t do it they could be deprived of food rations. Meanwhile, camp barracks were often full of lice, while a lack of hygiene and medical treatment caused illnesses, epidemics and deaths. 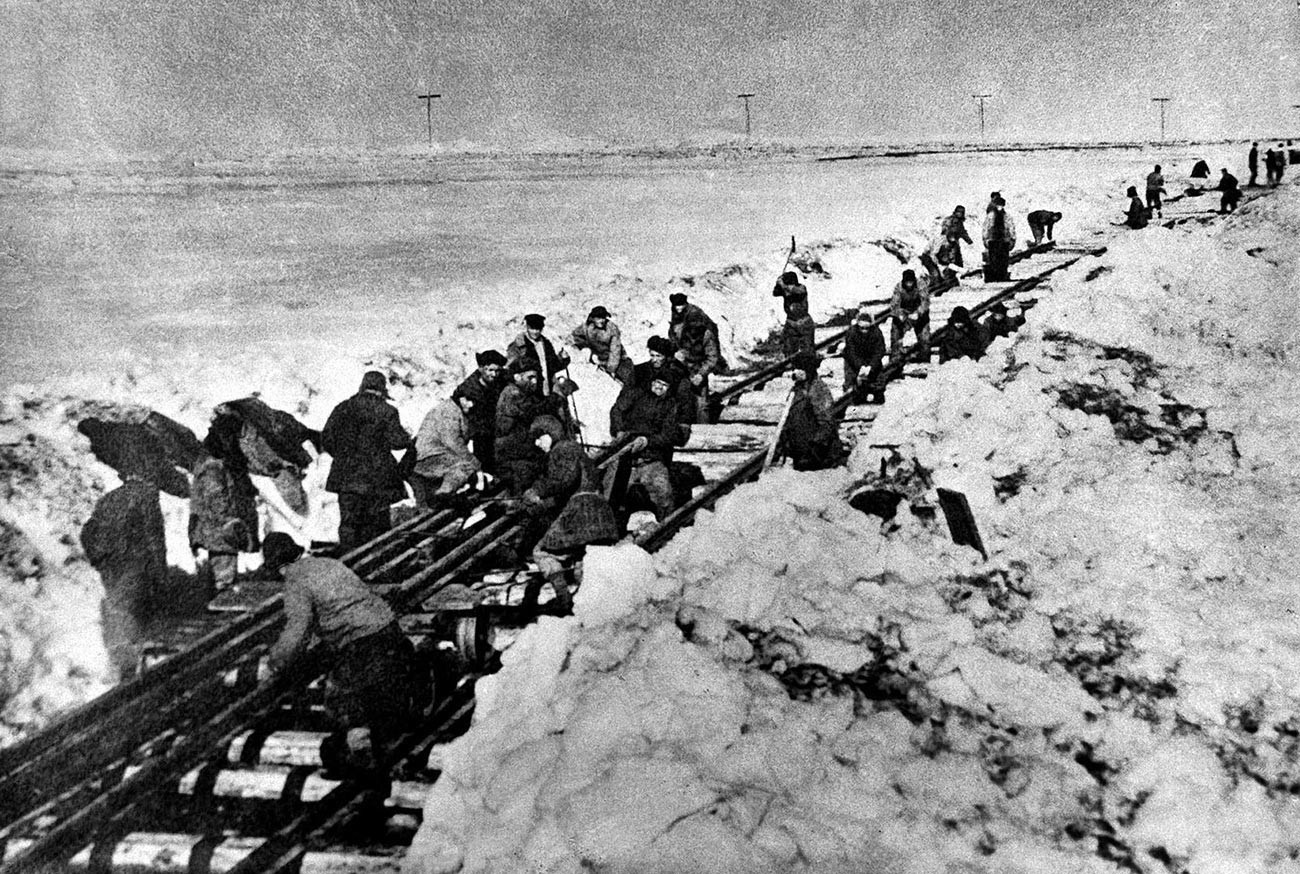 It was easy to lose one’s humanity in such circumstances. Some people tried not to go mad by writing letters to their families. Some fathers, for example, even tried to educate their kids through the letters. However, many people were not allowed to receive the replies. Many families didn’t know where their members were held and even if they were alive or not.

What does ‘Gulag’ mean for modern Russia?

Gulag has become a part of popular culture, not only in Russia, but all over the world. “Send him to gulag” is a popular insult on the internet. The Call of Duty: Modern Warfare 2 videogame has a mission titled ‘Gulag’ which takes place in a fort resembling the real Soviet camp. According to the plot, it was founded in the 18th century in Kamchatka and during the times of the USSR and World War III (which happens in the game) prisoners were held there. And then it gets attacked by the Americans to rescue their guy... 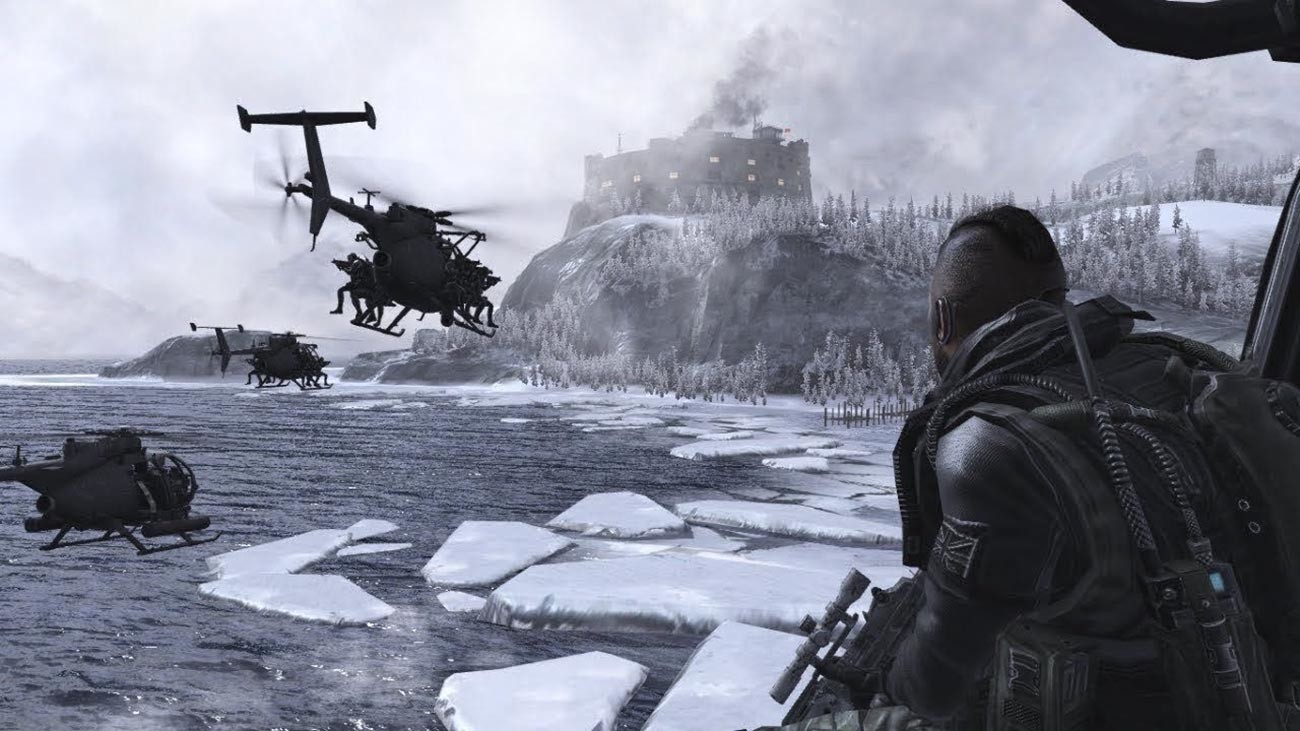 Gulag fort in the Call of Duty: Modern Warfare 2

However, it’s still an incredibly sensitive topic for many Russians. A lot of families in Russia have relatives who spent decades in camps or even died there. So people continue to dig up history, investigating their own families’ past, as most of the Gulag documents were classified until the 1980s.

Contemporary Russian writers keep exploring the topic, too. Among the most prominent recent novels on Gulag are Zakhar Prilepin’s The Monastery and Eugene Vodolazkin’s The Aviator. Movies about the Gulag, both features and documentaries, continue to appear.

There are several institutions in Russia which are busy with researching the Gulag history, archiving its past and presenting it to the younger generations so that this deeply traumatic and dark page of history will never be forgotten.