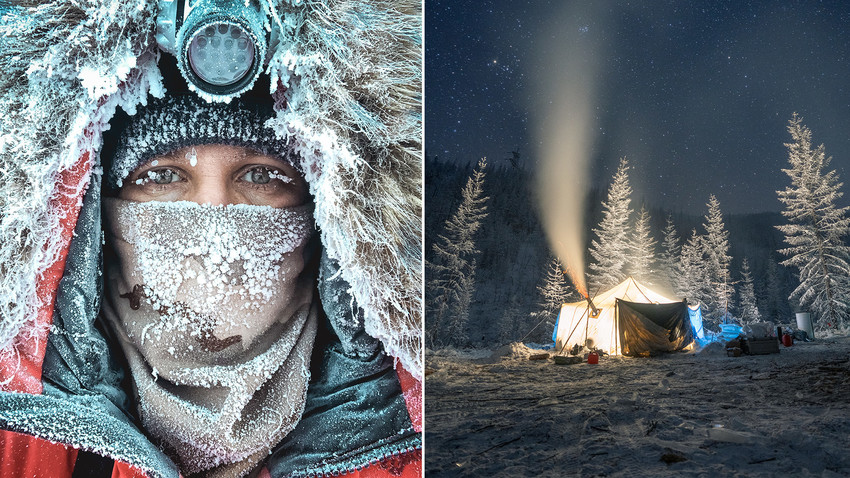 Pokoriteli Kholoda
The amazing inhabitants of a tiny village in Russia’s Far East aren’t afraid to submerge themselves in ice-cold water for some quiet meditation.

Ordinary people, aged anywhere between 30 and 90, calmly make their way from a nearby shack to an ice-hole, wearing nothing but thin robes and terry towels, draped over their necks. There’s nothing special about their body complexions either - some are on the slim side. They leave their flip-flops behind in the snow and carefully descend into the ice-hole over flimsy wood steps, where they will spend up to 10 minutes. 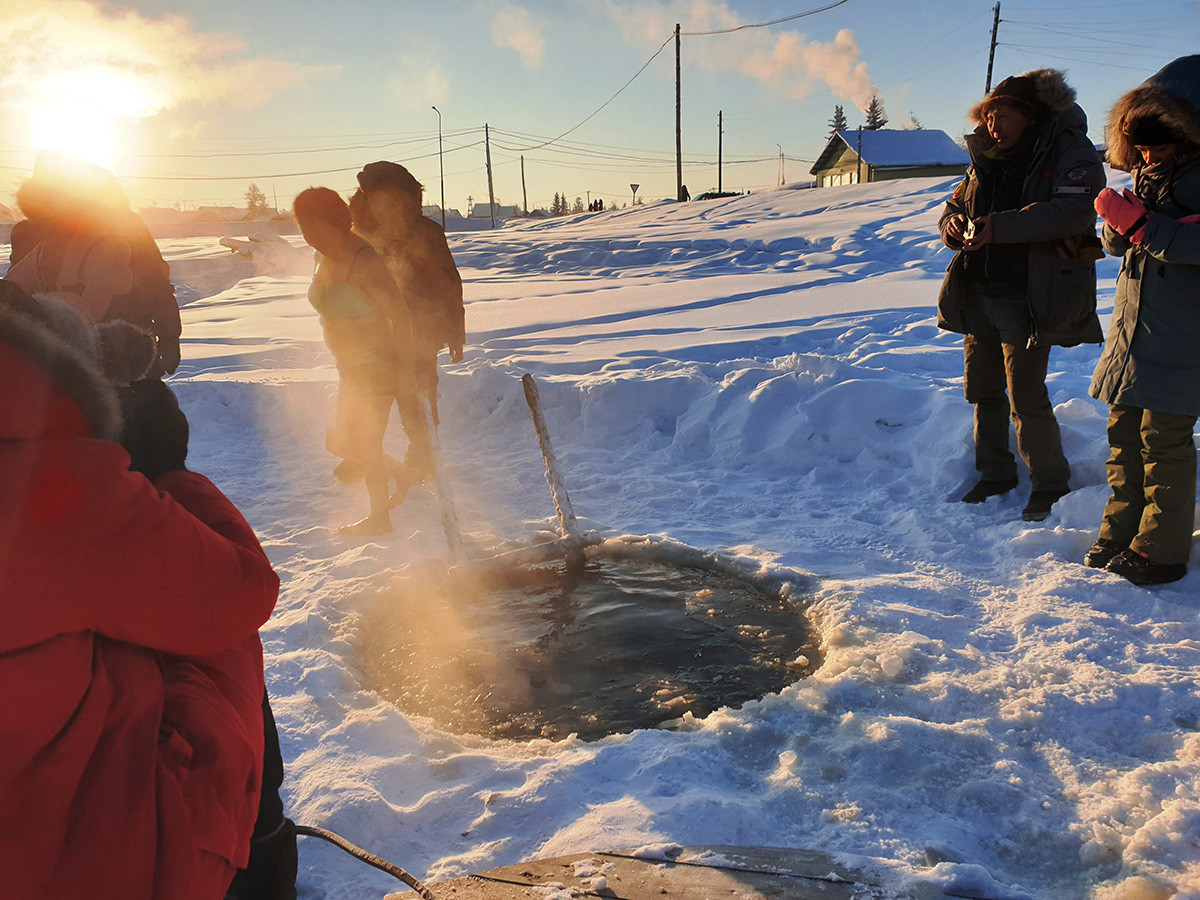 The final act is to submerge oneself entirely, together with the crown - the most sensitive spot on the head. The exit is performed slowly; there’s no rush. The same goes for the obligatory procedure of rubbing the snow over one’s body afterwards. Merely observing the ritual could put oneself in a trance-like state.

Smartphone batteries die so quickly in such extreme weather that these moments have to be recorded to actual memory.

The scene of this ritual of the моржи (“walruses” as ice-swimmers are often nicknamed in Russia) is in the Yakut village of Chorapche, considered among the coldest places on the planet.

The Sakha Republic (or Yakutia, as we know it), is the largest region in Russia. It’s so large that its territory is more vast than any country in Europe or Africa. The land is known for its “dual cold”: down below, the ice measures some 400 meters in thickness, while up top, the temperature regularly dips below -45 degrees Celsius. Sakha, in fact, sits squarely on the Northern Hemisphere’s Pole of Cold. Two of the country’s areas are locked in constant competition over the title of the coldest in the world - the Verkhoyansk and the Oymyakon Regions.

To an ordinary visitor, half a degree really makes no difference. They’re always guaranteed the ‘Sakha Fireworks’ (the act of throwing hot liquid up from a mug, making it freeze mid-flight) and the obligatory frozen-eyelash selfie.

The situation is different for the expert Cold Conquerors: these people are hell-bent on hunting down the lowest temperatures in the world - not only to record them, but to carry out scientific experiments, including using themselves as guinea pigs, testing the limits of human endurance. It’s a massive project. I was allowed to join them on their journey this time around.

An introduction to the ‘walruses’

The Conquerors travel to Sakha’s lowlands - where the cold air gathers - in the coldest possible time of the year, in late January. This much-loved period is also known in Russia as the ‘Epiphany Frosts’. It’s a daring adventure. There are plenty of weather stations and outposts out there, all of which can only be accessed with reindeer drawn sleighs or on snowmobiles. The grand prize is registering the new cold-weather record for that year. It might also become the last time such cold temperatures are ever recorded, given the global warming phase our planet currently finds itself in.

On their way to the lowlands, the Conquerors never miss a chance to stop by Chorapche - a tradition they hesitate to ever break. Once you get to know Sakha and its culture, you really start to believe in the spirits of nature - of the Earth, the water and the taiga - sometimes already on your third day there. One of the most striking elements of this magical realism is to observe the Chorapche ‘walruses’ do their thing. And it’s not what you’d think: while the more western Russians use the procedure to toughen their immune system’s defences, the Yakut refer to it more as a way to get warm.

The ‘walrus’ people go by many names: the Finns might call them ‘shrews’ or ‘seals’, North Americans may refer to them as ‘polar bears’. Whatever animal you go with, it’s still remarkable seeing a fellow human do something only a polar animal would do. And they’re ordinary people - not professional athletes or stuntmen.

The weather is so extreme there is steam coming off the water, which often develops into a layer of ice that has to be punctured. Chorapche inhabitants love it here! When it’s -30 degrees Celsius outside, water is actually about +4 degrees, which is the point of phase transition when the water becomes inert - not quite ice yet, but no longer flows like a liquid: the particles of liquid ice stop penetrating the cells’ membranes. This so-called ‘biological zero’ is the last point at which life can thrive. Below that, the organism is put under stress. 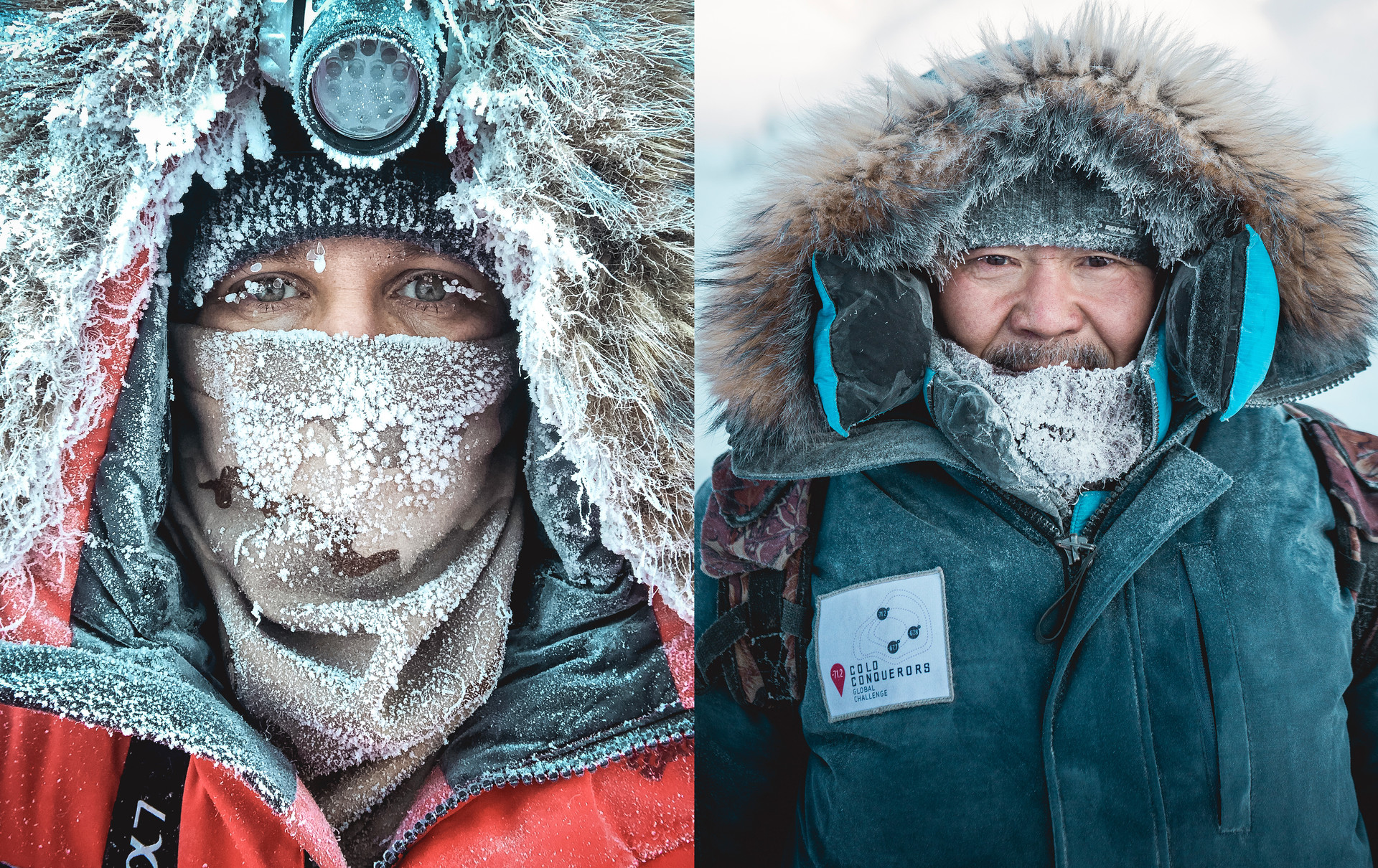 But the Yakut ‘walruses’ are at peace - in fact, they love to meditate while submerged in ice. “What are they saying” - a member of the Conquerors asks the locals. But the spiritual, improvised ode to the cold is not translated out of respect for the sacral nature of the moment.

The path to a ‘walrus’ life

Some moments later, when the founder of the local ‘Club for Winter Swimming’ exits the ice, communication resumes in Russian. The surrealism only intensifies from there. Now 90 years of age, Afanasiy Dorofeev sits in a snowdrift and tells the story of how traditional medicine gave up on him when he was just 48. Due to a complex bouquet of hereditary predispositions, he was not projected to live long. Having buried his family and relatives one by one, he set his mind to cheating death and began to моржевать (“to walrus”; the noun is often also used as a verb in Russian).

He continues his story in a slow, measured manner, whilst walking home in nothing but his speedos (while we can’t wait to get indoors, walking briskly, despite wearing special winter gear). And Afanasiy didn’t really have to say anything: he’s lean, with a great posture and sound mind, and, amazingly, suffering none of the conditions normally associated with his age - living proof of the efficacy of walrusing as a health practice, the way the extreme cold slows down the aging process. 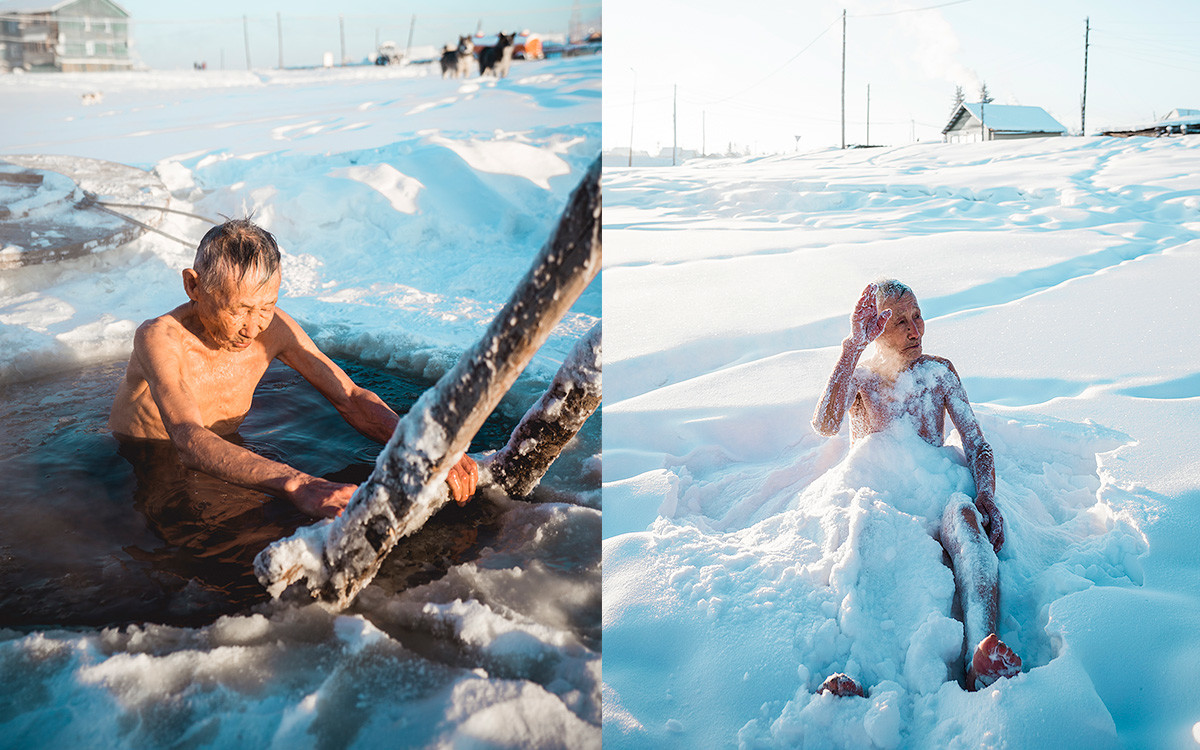 Afanasiy gradually gained a loyal band of followers. The ‘walruses’ came one by one, each with their own reasons for joining up with him. The core club numbers 12-20 individuals - most of them from the village, but with new arrivals from other regions of Sakha. Those who train their immune systems to withstand the cold all year round are capable of performing ice-hole practices once every few days. Following a set rhythm and undergoing gradual preparation for temperature fluctuations guarantees success. The practice can only really be gradual, and everyone is ready in their own time. But none of the ‘walruses’ in the group are doing it as a fun or temporary challenge.

Afanafiiy’s instructions are followed to the letter. He knows the story of each of his members: one may have come to him to learn cardiovascular procedures as a type of alternative medical practice, another - to expand their organism’s capabilities.

Afanasiy once spent a total of nine minutes submerged in ice in front of my eyes; beginners usually do sessions of no more than two-three minutes. Exiting the ice is done only when Afanasiy gives the command - no sooner and no later. “He knows the exact moment,” they say. Chorapche ‘walruses’ are sometimes called a sect by outsiders - but only in jest. It’s a completely open society of people of varying interests, and always ready to share their experiments with the outside world. The only mistake you can make with them is to attempt to estimate the age of the person talking to you about their transformative experience. All of Afanasiy’s followers could easily manage lying about their age - they come across as 10 years younger, sometimes more.

“What about the first time you ever did it? Was it frightening?” I ask him, while doing my best to try and not outrun the slow march of the old man. “Cold is only on the outside, we are really warm on the inside,” he responds with a smile, inviting me in for tea.