10 literary masterpieces on which every Russian was raised 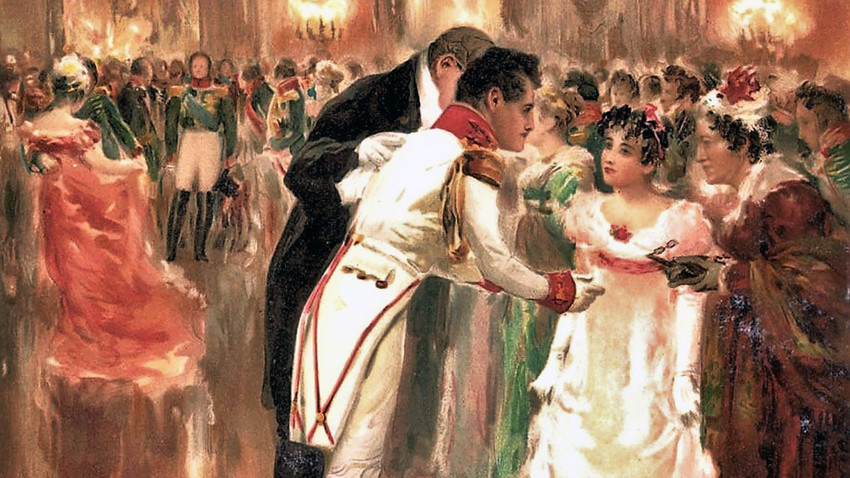 The meeting of Andrei and Natasha at the ball is one of the central scenes of War and Piece.

L. Pasternak
Thanks to a school curriculum that includes masterpieces by Pushkin, Gogol, Tolstoy, Solzhenitsyn and others, Russians from all segments of society have a common cultural bond and intellectual reference point. This is an important factor in fostering national identity and social cohesion.

For Russians, classical literature is more than a way to learn their language or to pass the time. Some classics that are taught at school play an important role in forming the nation’s cultural identity, and Russians often refer to them when making comparisons with similar situations, to characterize a person, to talk about love or hate, or just to use an idiom or make jokes. Every Russian will understand the reference because everyone read the same books at school. Russia Beyond has compiled a list of the most important literary works, and if you read them all, then you’ll better understand the Russian mentality.

1. The Minor, by Denis Fonvizin 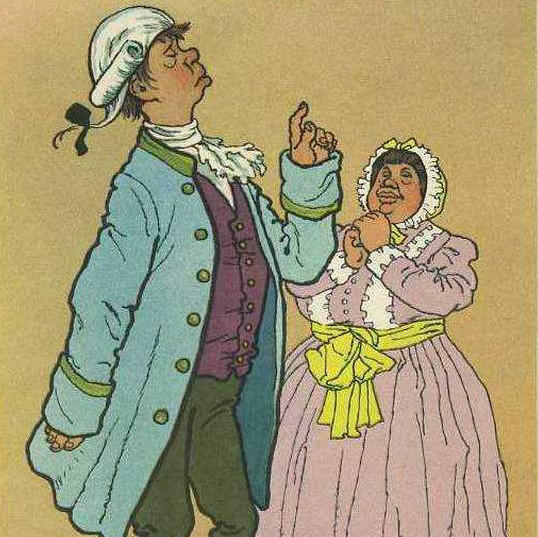 Catherine the Great prohibited Fonvizin to publish other literary works, which was the price paid for his biting satire on Russian life.

Quotes from the 18th century comedy, The Minor, which is Denis Fonvizin’s most remarkable satirical work, quickly became a source of many idioms and proverbs in Russian literature and language. The main hero, Mitrofanushka, is a selfish and uneducated member of the gentry, and he’s the main target of Fonvizin’s wit. Soon after The Minor’s appearance in 1783 on Moscow’s theatrical scene, the comedy was an instant hit. At the same time, Catherine the Great prohibited Fonvizin to publish other literary works, which was the price paid for his biting satire on Russian life.

2. Woe from Wit, by Alexander Griboyedov 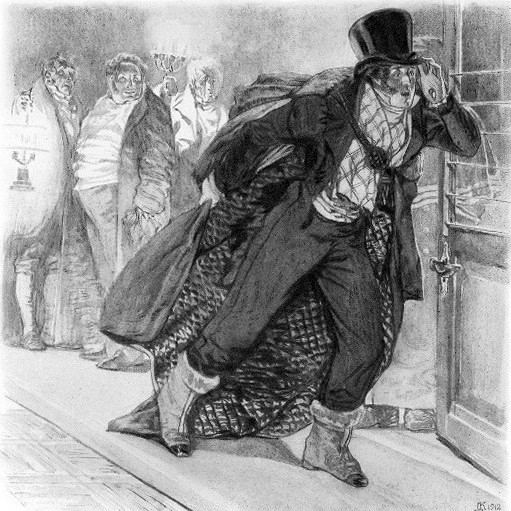 A diplomat and playwright, Alexander Griboyedov entered the history of Russian literature merely as author of one play, Woe from Wit. Monologues by this masterpiece’s main hero, Chatsky, are often learned by heart at school. This 19th century play shows the conflict faced by an educated person, unable to curry favor with a hypocritical society. Completed in 1824, the play was published only in 1833 because of the state censor. The author, however, never saw Woe from Wit published. As ambassador to Persia, Griboyedov was murdered in 1829 at the age of aged 34 during an anti-Russian riot in Tehran. 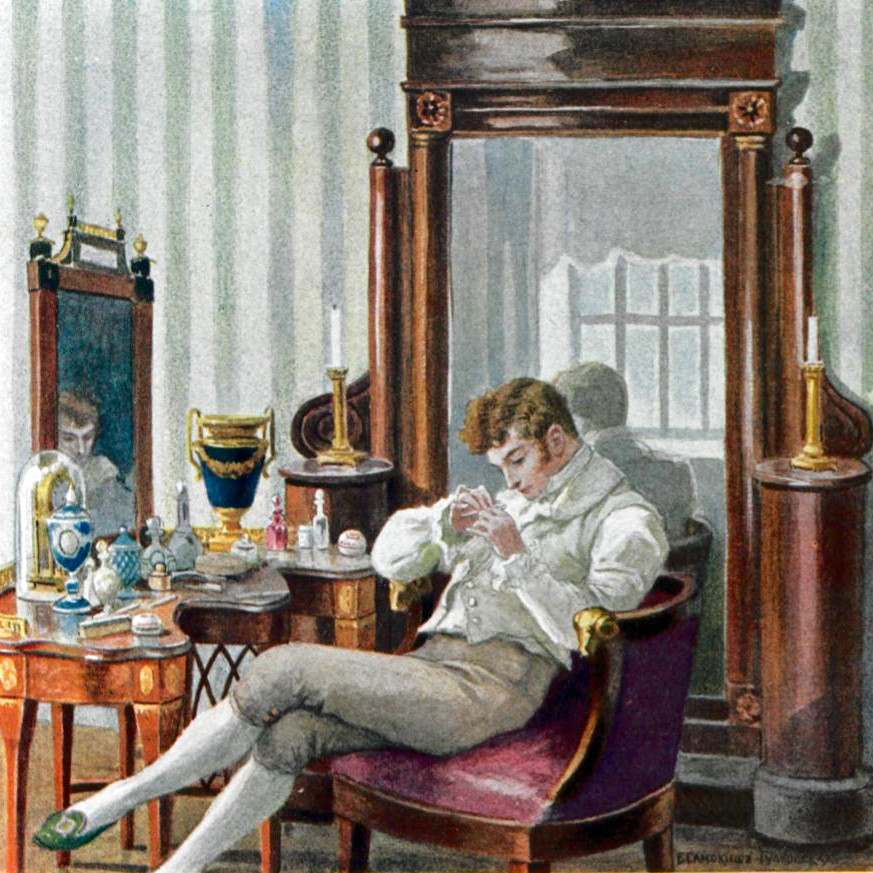 By far the brightest star in Russian poetry, Alexander Pushkin pioneered the genre of novel in verse, best exemplified by his brilliant work, Eugene Onegin. This is the story of the unfortunate romance between Onegin, a bon vivant satiated and tired of life, and the modest country girl, Tatyana. She is waiting for a man to fall in love with, but Onegin at first doesn’t take her seriously. Pushkin spends much time describing Russian culture, history and traditions. The novel is rightly called an encyclopedia of Russian 19th century life, and to this day it remains dear to Russians from the earliest ages. The most vital elements include Tatyana’s famous letter to Onegin, descriptions of Moscow, words dedicated to the country’s natural beauty, and the author’s humor and self-irony.

4. A Hero of Our Time, by Mikhail Lermontov 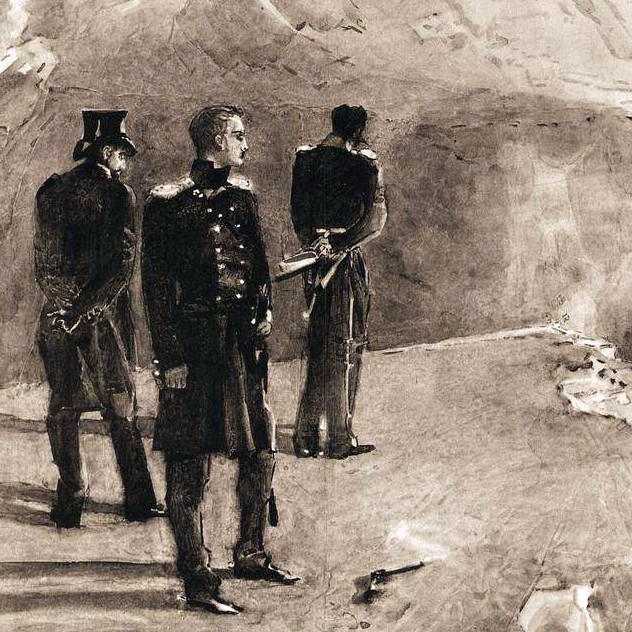 This is the story of Grigoriy Pechorin, a Russian officer traveling and serving in the Caucasus region. This bon vivant created by Russian poet and writer, Mikhail Lermontov, joins the gallery of ‘superfluous man’ of 19th century Russian literature that began with Pushkin’s Eugene Onegin. A highly educated member of Russian aristocratic society, Pechorin is cynical, nihilistic and melancholic. He has no purpose in life, and plays with death, seeing other people as fodder for cruel experiments and hedonistic joy. Lermontov’s hero was later joined by many other such characters in 19th century literature. Along with Pushkin, Lermontov is considered one of Russia’s greatest poets. 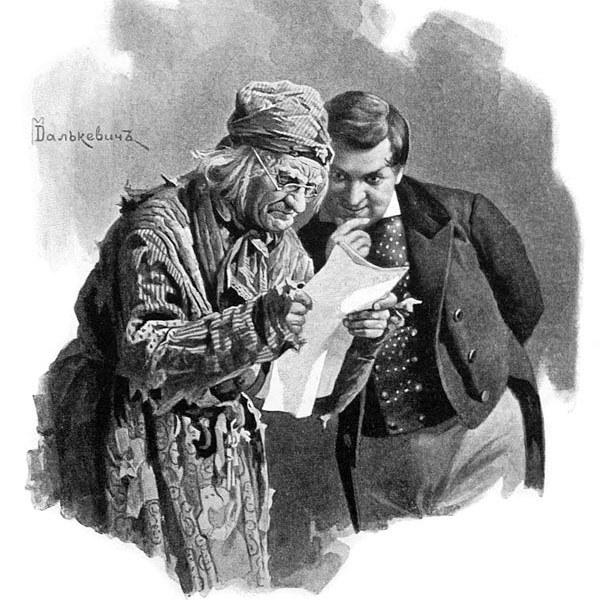 Chichikov’s travels explore the reality of 19th century Russian country life and the types of people living there.

Dead Souls by Nikolai Gogol is one of the most powerful works of 19th century Russian literature. The author, however, burned the sequel and soon died of mental illness. There is a legend that Gogol got the idea for his novel from Alexander Pushkin. The story is about the poor nobleman, Pavel Chichikov, who travels the country to buy serfs who only exist on paper, and then to perpetrate a financial scam by mortgaging the dead serfs as if they were alive; then he plans to take out a bank loan, and run with the money. Chichikov’s travels explore the reality of 19th century Russian country life and the types of people living there.

6. Crime and Punishment, by Fyodor Dostoyevsky 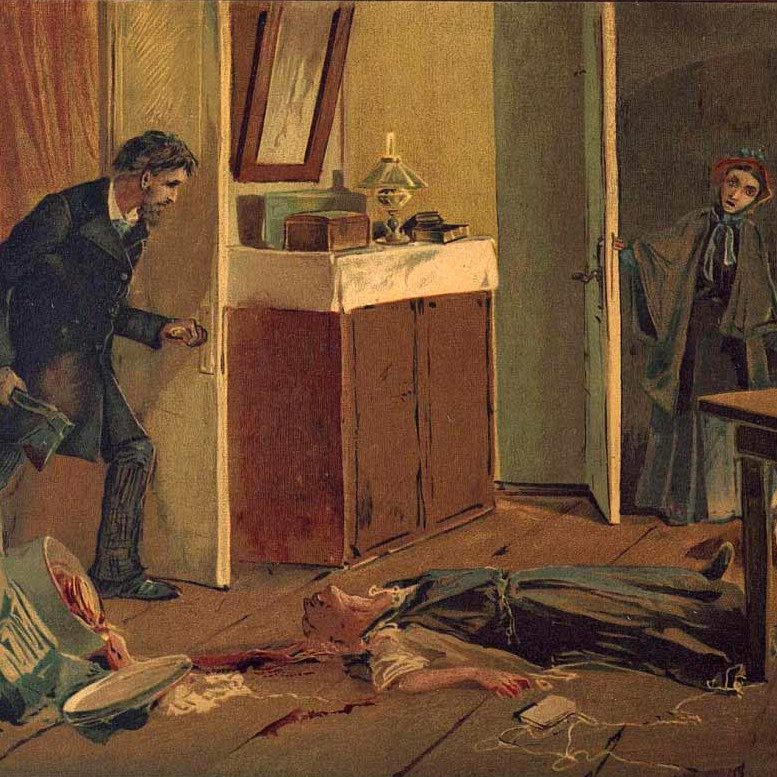 Rodion Raskolnikov grapples with the question of whether or not he’s “a trembling creature,” and “has the right” to kill.

With more than 25 film adaptations around the world, Crime and Punishment is probably the most famous book by Fyodor Dostoyevsky. The story centers on a former student’s moral dilemma. Rodion Raskolnikov grapples with the question of whether or not he’s “a trembling creature,” and “has the right” to kill. He compares himself to Napoleon and thinks that good intentions can justify any crime. He kills an old woman who is a moneylender, and then surrenders to police as a result of his moral anguish. Today in St. Petersburg, where the novel takes place, there are numerous tours dedicated to Raskolnikov’s life. He is still very much a part of the city’s fabric.

7. War and Peace, by Leo Tolstoy 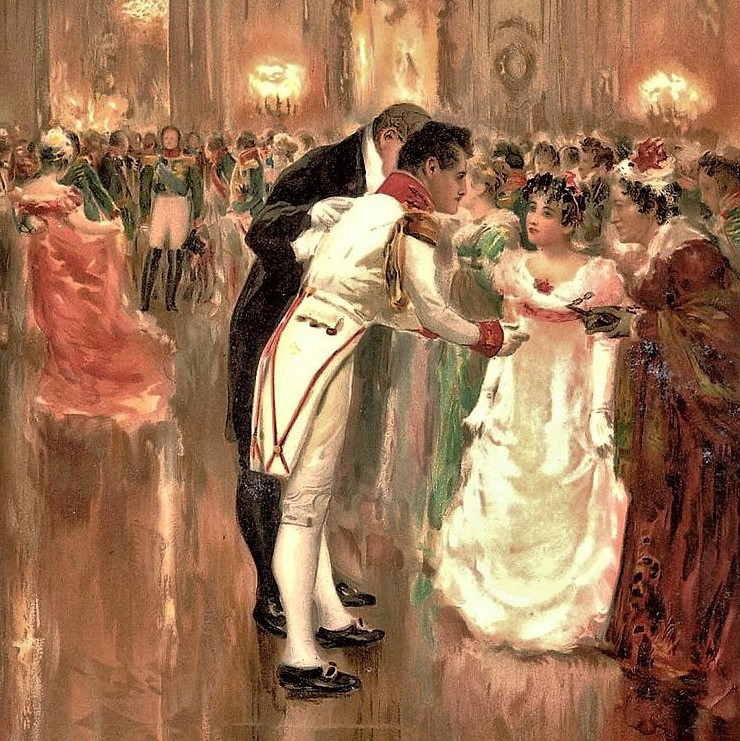 The meeting of Andrei and Natasha at the ball is one of the central scenes of War and Piece.

Probably not many Russians have managed to finish all four volumes of War and Peace, whose first pages were written in French. Still, almost everyone returns to it at a later age. Some prefer the lines about love, while others enjoy the descriptions of the war against Napoleon in 1805—1812. Without a doubt War and Peace is one of the most important books in Russian and world literature. In Soviet times it was the country’s most published, with more than 360 million copies printed in 312 editions. 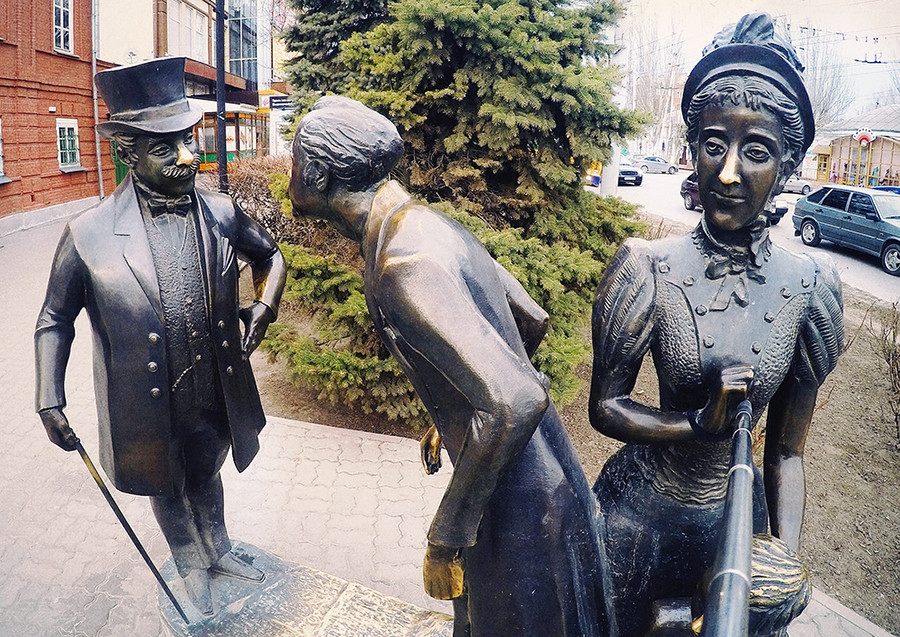 Sculptural composition Thick and thin by D. Begalov in Taganrog.

Russians begin to read Chekhov’s short stories in the earliest grades. As the endearing story of a dog devoted to its master, Kashtankatouched many children’s hearts. Funny, short, full of humor, irony and satire, Chekhov’s stories have always been loved by both schoolchildren and adults in Russia. Among these are Ionych, Fat and Thin, and Little Trilogy. Chekhov’s dramas - The Seagull, Uncle Vanya, Three Sisters, and The Cherry Orchard - are often studied later, usually in high school.

9. And Quiet Flows the Don, by Mikhail Sholokhov 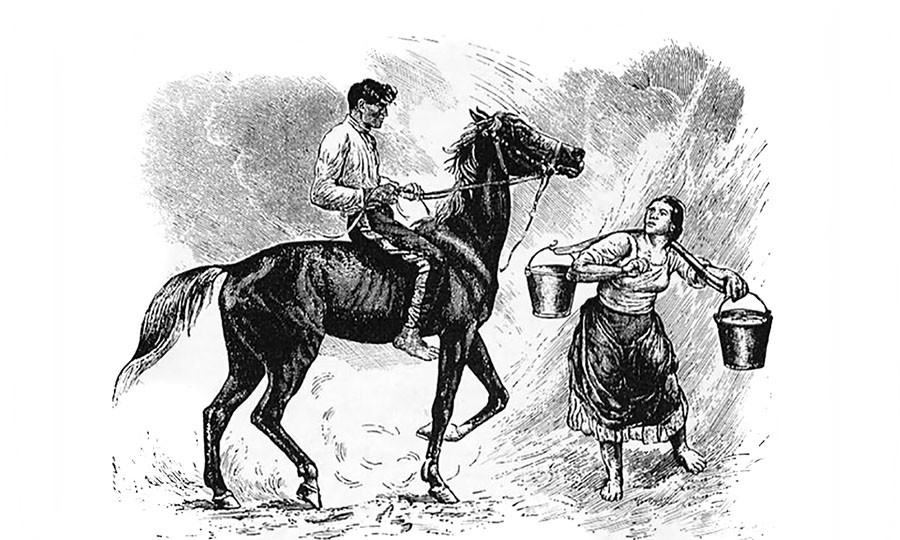 Authorship of this book, for which Mikhail Sholokhov won the Nobel Prize in literature in 1965, is still debated by literary critics.

Authorship of this book, for which Mikhail Sholokhov won the Nobel Prize in literature in 1965, is still debated by literary critics. Some say it’s not possible for a 22-year-old to write such an exceptional work at such a young age. Sholokhov’s handwritten drafts were long lost, which is rather strange considering the novel’s importance and length. Some experts contend that the novel was written by Fyodor Kryukov, a White Army officer. Whatever the truth, this book about the destiny of a man at the time of the Russian Revolution, describing the life of the Don Cossacks, is one of the most significant books of 20th century Russian literature.

10. One Day in the Life of Ivan Denisovich, by Alexander Solzhenitsyn 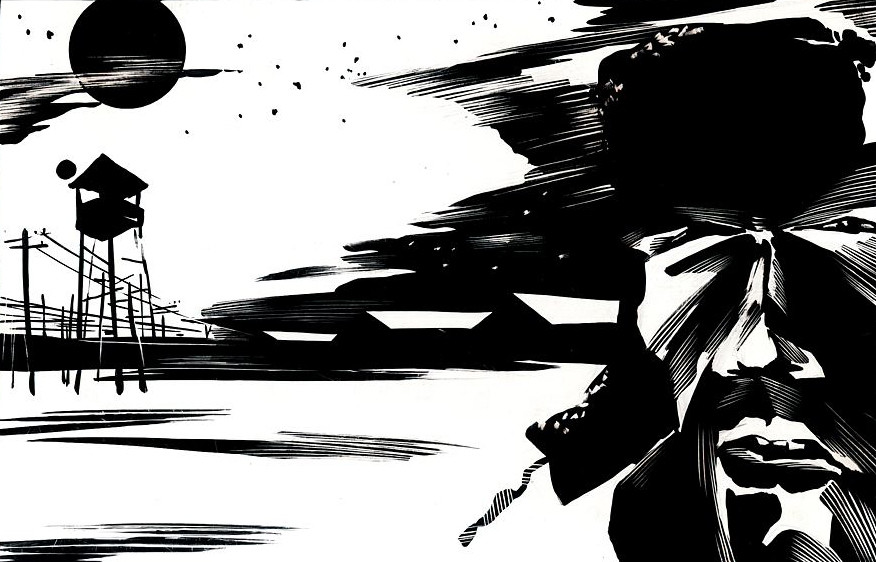 The book tells the story of one day in the life of Ivan Denisovich Shukhov, a prisoner in a Soviet labor camp in the 1950s.

The writings of another Nobel Prize winner (1970), Alexander Solzhenitsyn, were long prohibited in Russian schools. This author’s short stories and novels began to appear at schools only during Perestroika, in the end of the 1980s. They became the most damning evidence of Soviet repressions. One Day in the Life of Ivan Denisovich, first published in 1962, now occupies a central place in the study of 20thcentury literature in every high school class. The book tells the story of one day in the life of Ivan Denisovich Shukhov, a prisoner in a Soviet labor camp in the 1950s. The book’s publication was extraordinary because it was the first time that Stalin’s repressions were openly described.

Now that you have a taste of Russian literature, have a look at our rating of the greatest national writers of all time.