Lifestyle
Alexandra Guzeva
From the early days of the new communist state, Stalin and other leaders were happy to issue personal invitations to writers, singers and actors sympathetic to the new regime to visit Moscow and Leningrad (now St. Petersburg). 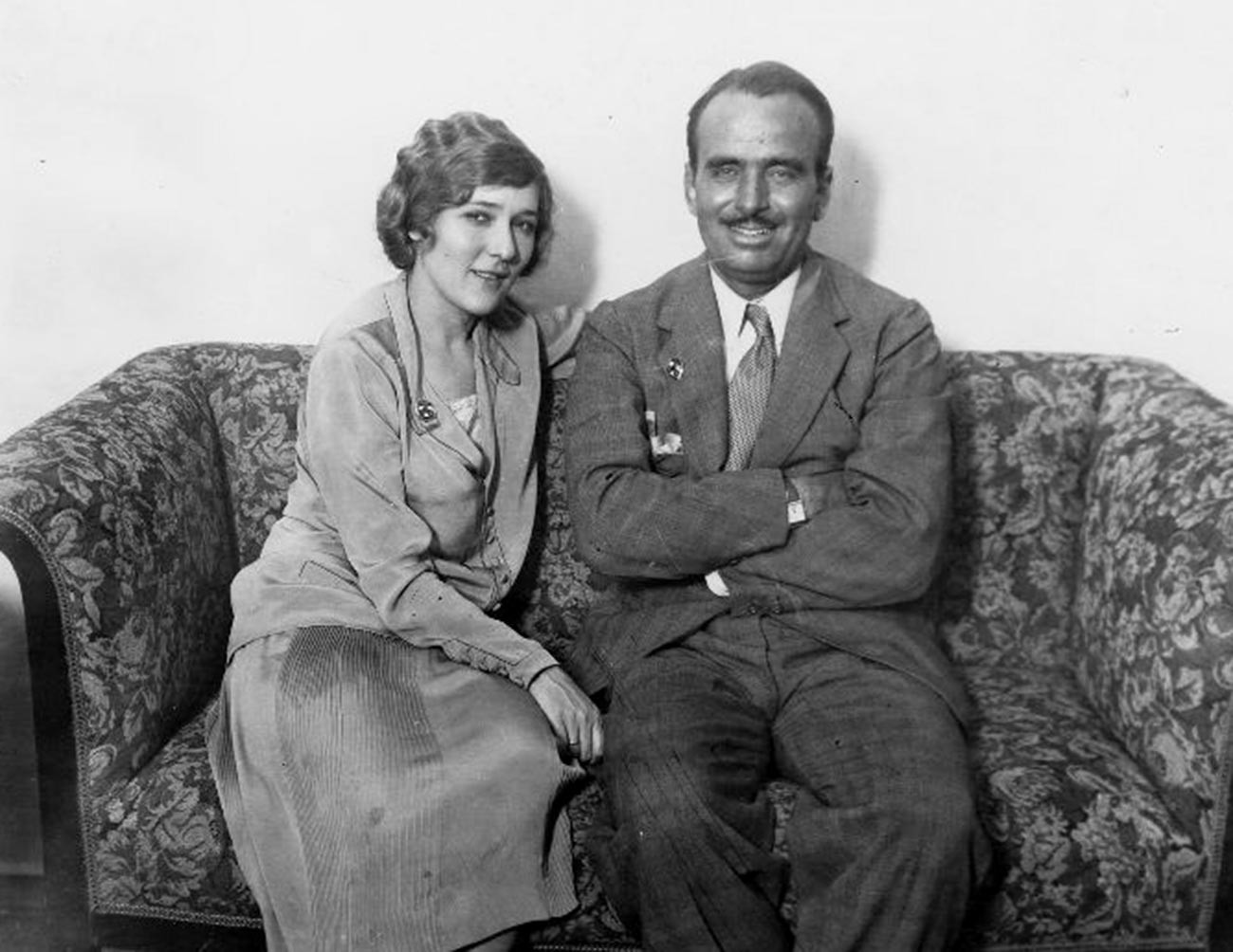 The actors were incredibly popular in the USSR. In the 1920s, the Soviet Union even made hard candies called ‘Pickford-Fairbanks’ with the actors’ portrait against the background of the American flag on the wrappers. When Pickford and Fairbanks arrived in Moscow in the summer of 1926, they were greeted by enthusiastic fans. It is interesting that the visit coincided with the death of Felix Dzerzhinsky, founder of the Cheka [Soviet secret police] and chief “executioner” of the USSR. His lying-in-state was taking place very near the hotel where the actors were staying, so the mourners could hear the shouting of the adoring crowd. 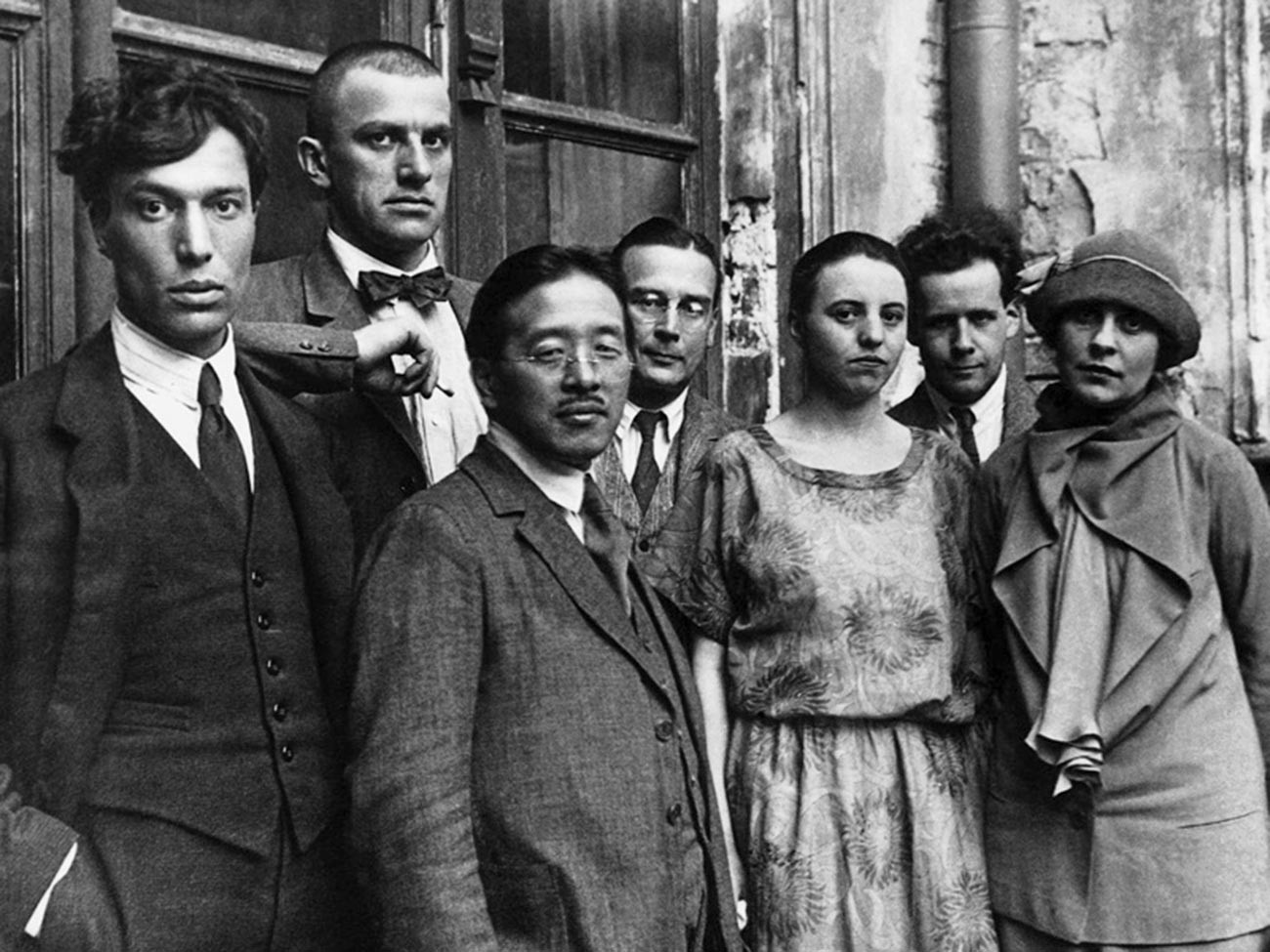 In the 1920s, relations between Soviet Russia and Japan were difficult. But journalist and politician Tamizi Naito tried to improve them in every possible way and championed the diplomatic recognition of the new state in the Japanese media. In 1924, he was the first Japanese statesman to be invited to Moscow by Soviet authorities. He met Stalin, representatives of the party and the cultural elite. 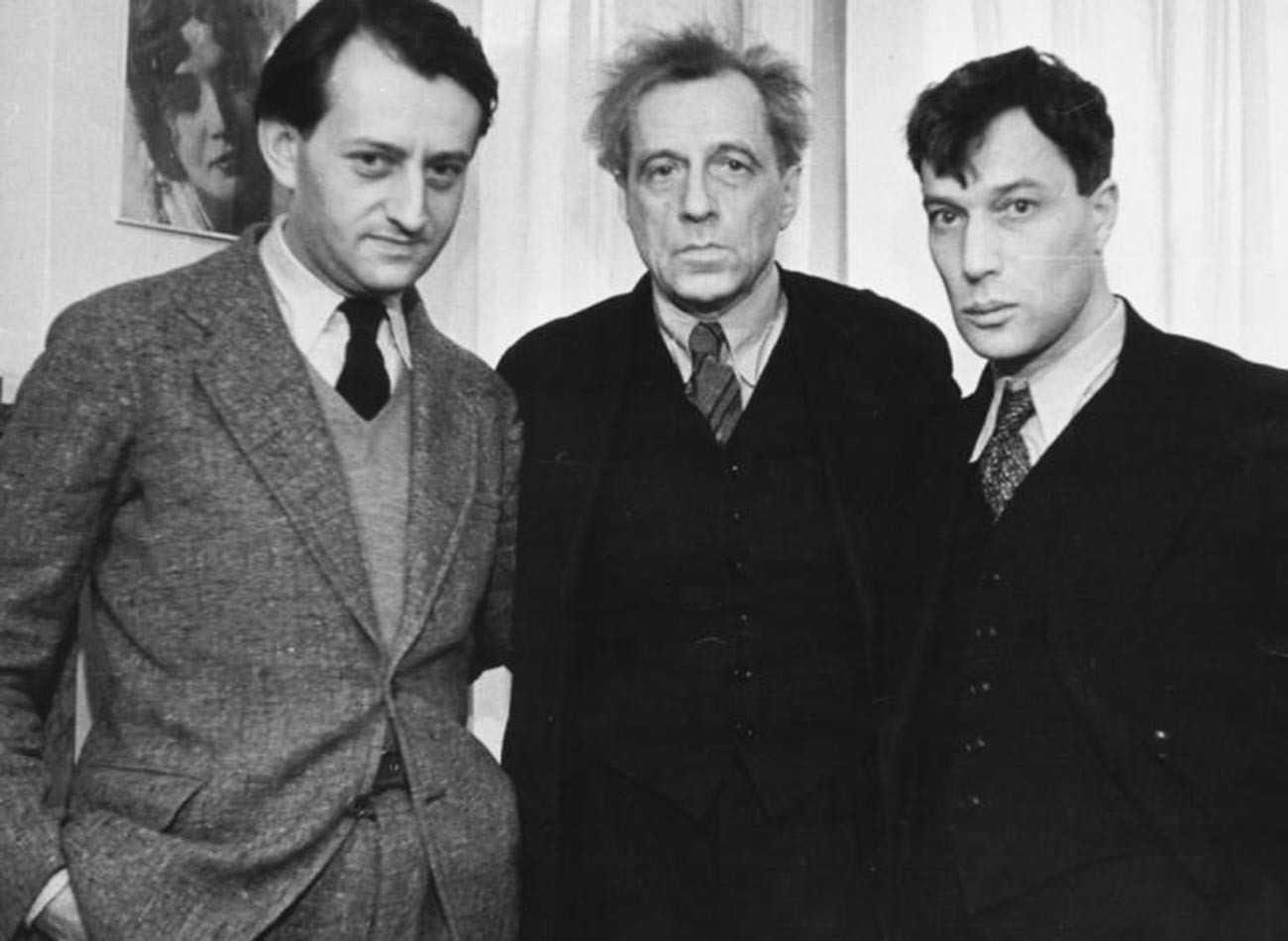 André Malraux was left-leaning and sympathized with the Soviet Union. He admired the art and literature of the avant-garde and the personality of the revolutionary Leon Trotsky. In 1934, Malraux visited the USSR and was a guest of honor at the First All-Union Congress of Soviet Writers, where he met Maxim Gorky, Aleksey Tolstoy, Boris Pasternak (pictured on the right), Isaac Babel and other writers, as well as theater director Vsevolod Meyerhold (pictured in the center). 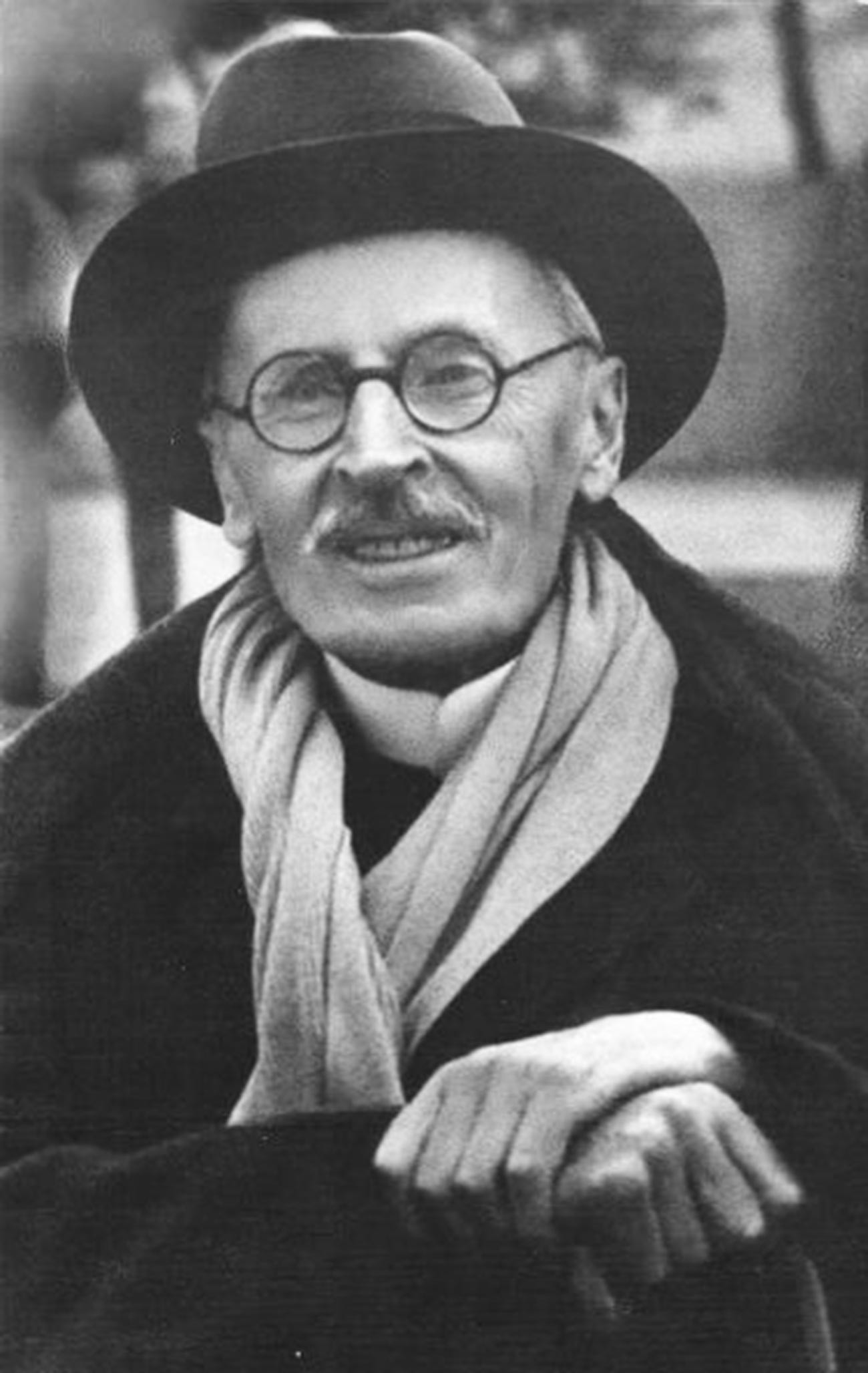 French celebrities were frequent guests in the USSR. In 1935, Romain Rolland was invited to Moscow by leading Soviet writer Maxim Gorky. The Frenchman received a rare honor - he was invited onto the platform of the Lenin Mausoleum, where only party leaders and communists from friendly countries were usually allowed to stand. From the platform, Rolland watched a parade of gymnasts. 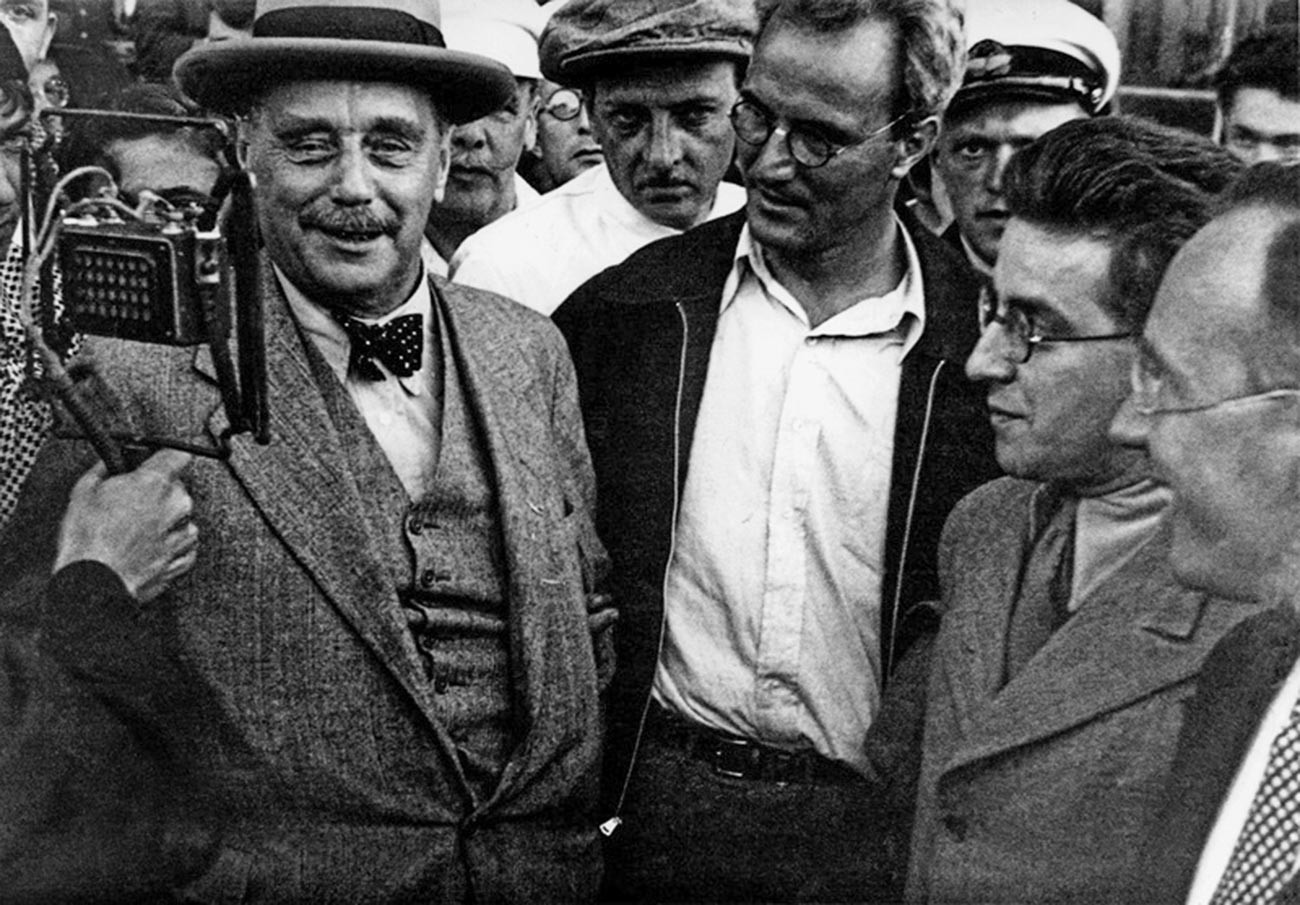 H.G. Wells was simply adored in the Soviet Union and his books were published in enormous print runs. In turn, he visited the USSR three times, met Lenin as well as Stalin, and was simply captivated by them. He also became very friendly with Maxim Gorky (ironically, it was for H.G. Wells that Moura Budberg, Gorky's lover and a double agent, left the Soviet writer). You can read more about H.G. Wells’s connections with the USSR here. 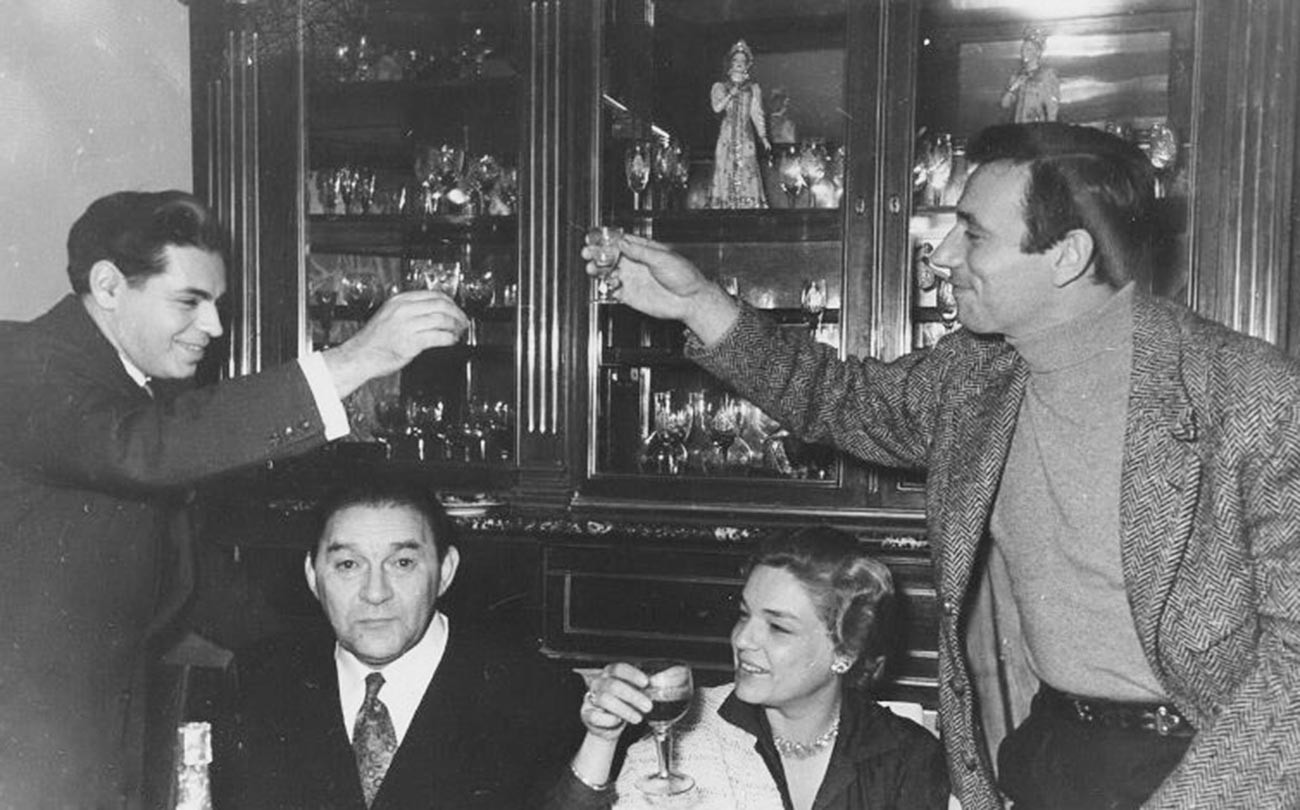 In 1956, the incredibly popular singer Yves Montand and his wife Simone Signoret came to the USSR on tour. His performances were attended by tens of thousands of people. He also performed in front of workers at factories, and the country’s leaders came to his concerts. After one such concert Nikita Khrushchev invited Yves and his wife to dinner, at which the singer bravely declared that he didn’t approve of the Soviet invasion of Hungary. Khrushchev didn’t take offence, instead spending a long time trying passionately to explain his position. In the photo, Montand and Signoret are having a drink with legendary Soviet performers, comedian Arkady Raikin and singer Leonid Utyosov (both pictured on the left). 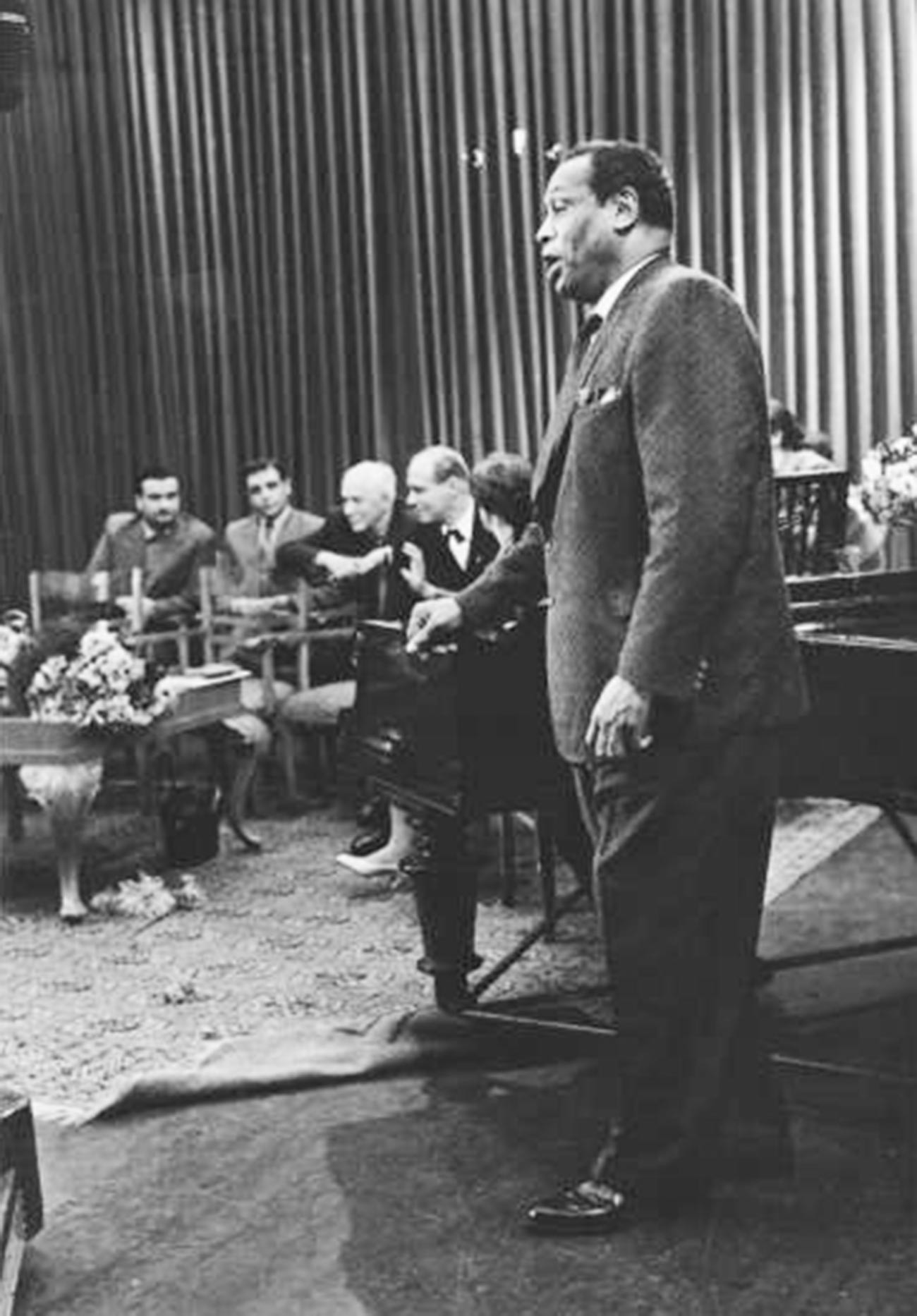 Robeson visited the USSR several times. On this first visit in 1934, was enthralled by the country and later claimed that “in Russia, I felt for the first time like a full human being…” However, because of his sympathy for the Soviet Union, in the U.S. he was suspected of communist links and was even put on the ‘Hollywood blacklist’. But he visited the USSR again  - and more than once -  and even gave performances singing Russian songs. 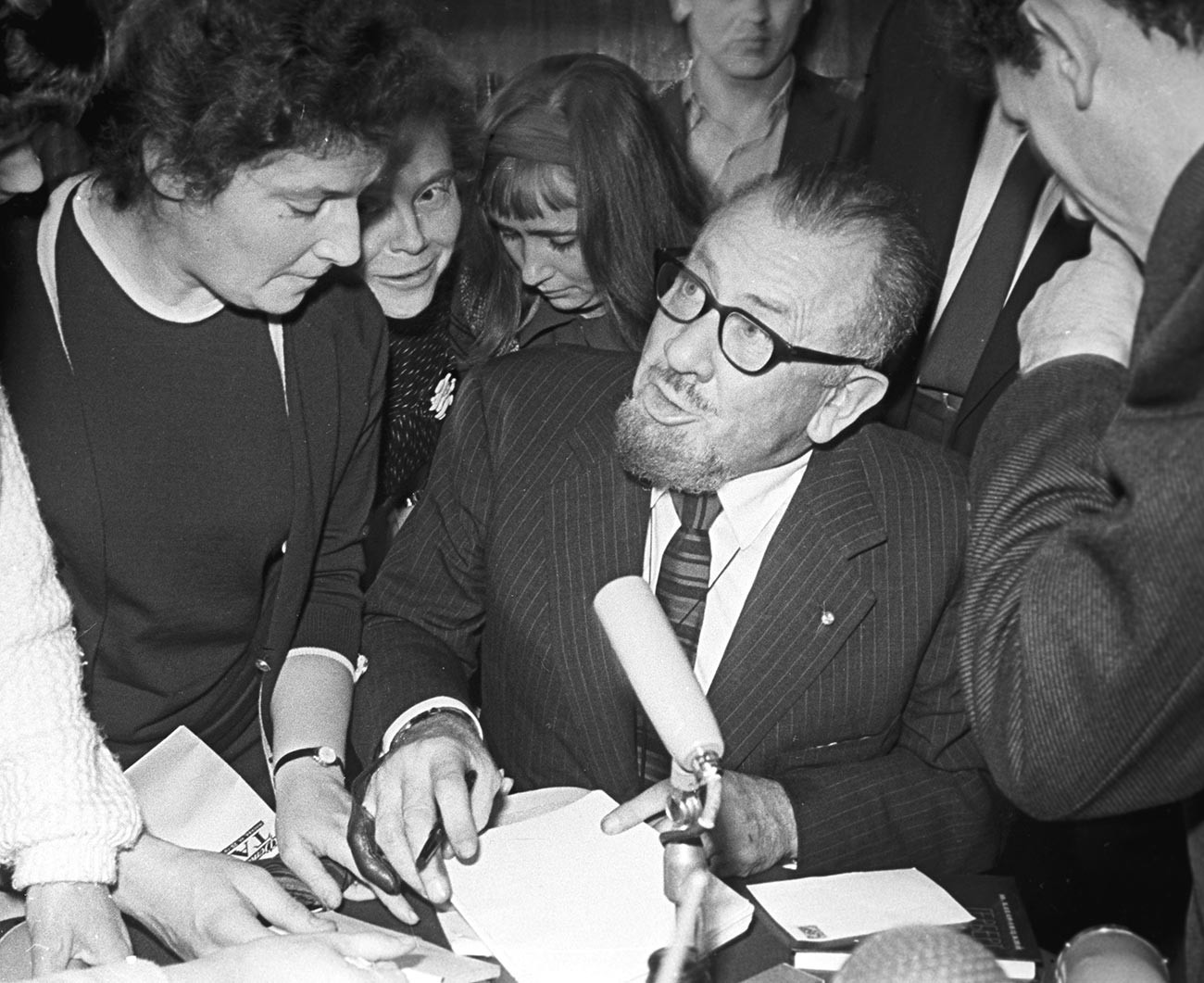 In 1947, Steinbeck set out on a long journey across postwar USSR, because the American press could not answer the questions: “What do people wear there? What do they have for dinner? Do they have parties?” In the wake of his travels, Steinbeck wrote A Russian Journal, which also included photographs by his travelling companion Robert Capa. 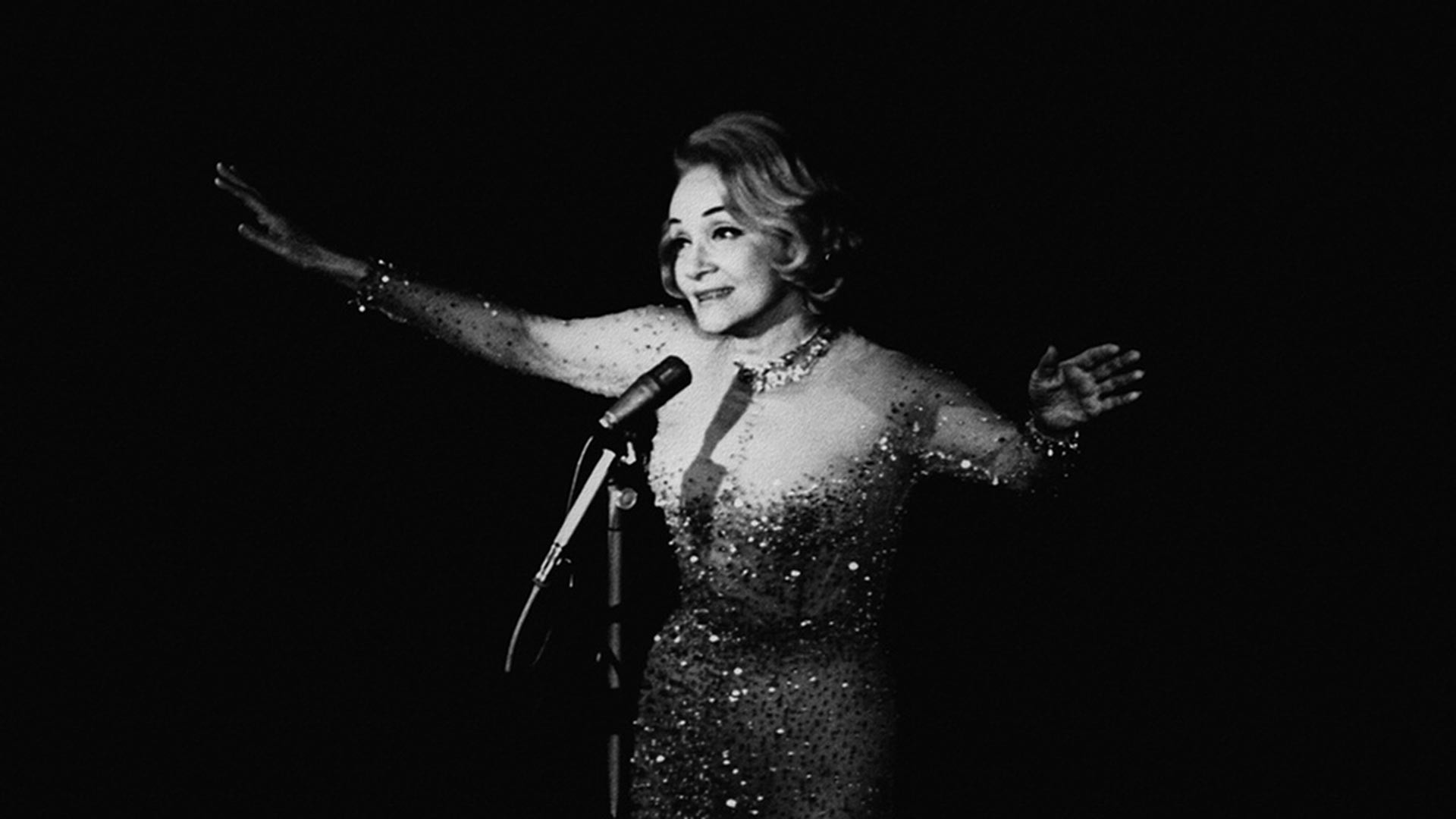 Marlene Dietrich during her 1964 tour to the USSR

Superstar Marlene Dietrich came on tour to the USSR in 1964. She gave concerts in Moscow and Leningrad, and also answered questions from Soviet concert-goers. Of course, the most well-read of nations used the opportunity to ask whether she knew any Soviet writers and - to everyone’s surprise - she replied: “Konstantin Paustovsky.” The author happened to be in the audience and the star… knelt at his feet! Read more about the bizarre encounter here. 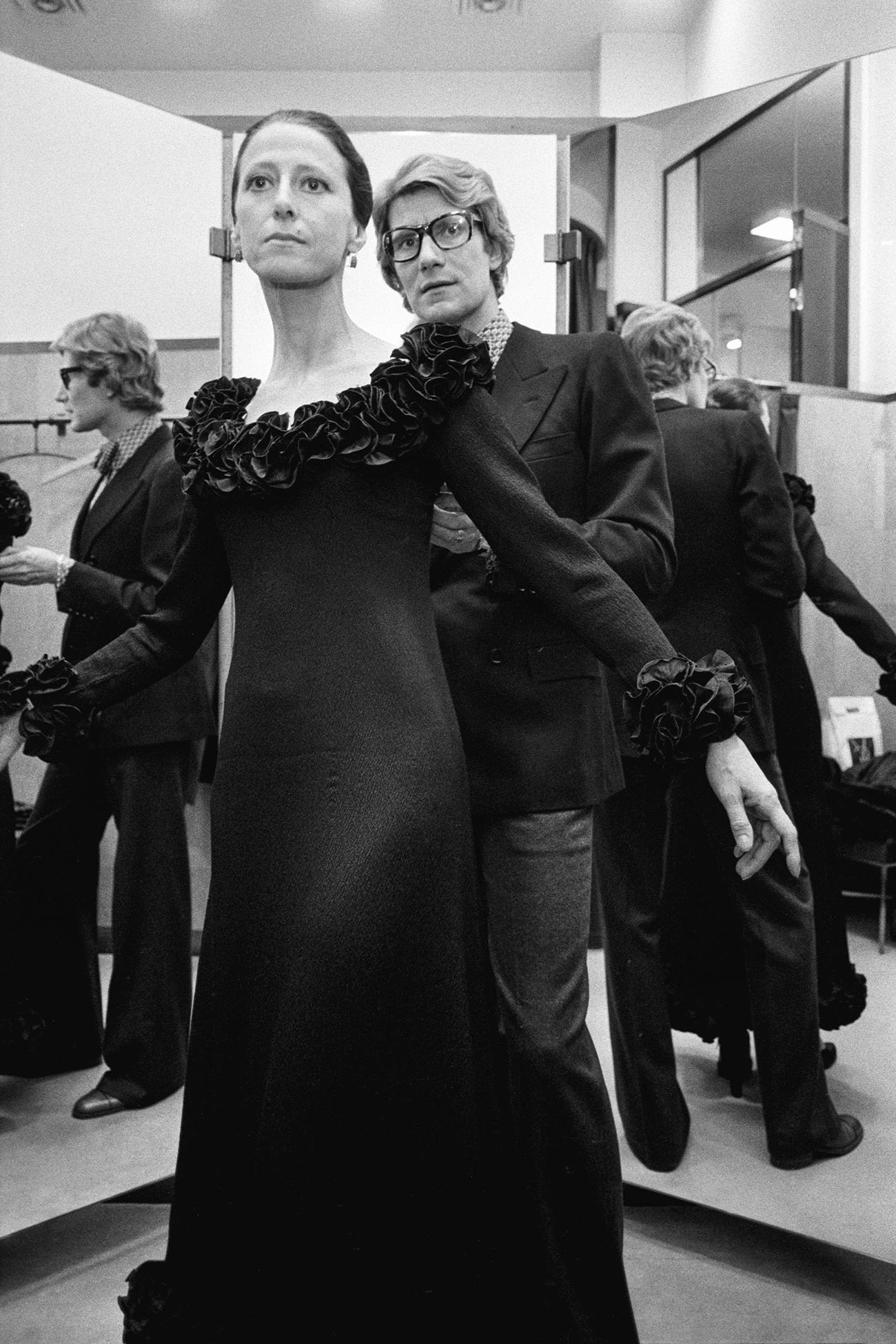 The first fashion show in the USSR was a five-day event in 1959 with Dior models. The head of the House of Dior, Yves Saint Laurent, personally arrived in Moscow and the show sold out every day. True, some Soviet women didn’t appreciate all the outfits - some struck them as too short or pretentious. For his part, the designer was greatly inspired by the USSR and returned to the country on more than one occasion. Later, in 1976, he created one of his most lauded collections, ‘Opéra’ - Ballets russes, based on Russian motifs. (Read more about Yves Saint Laurent’s “love affair” with Russia here). 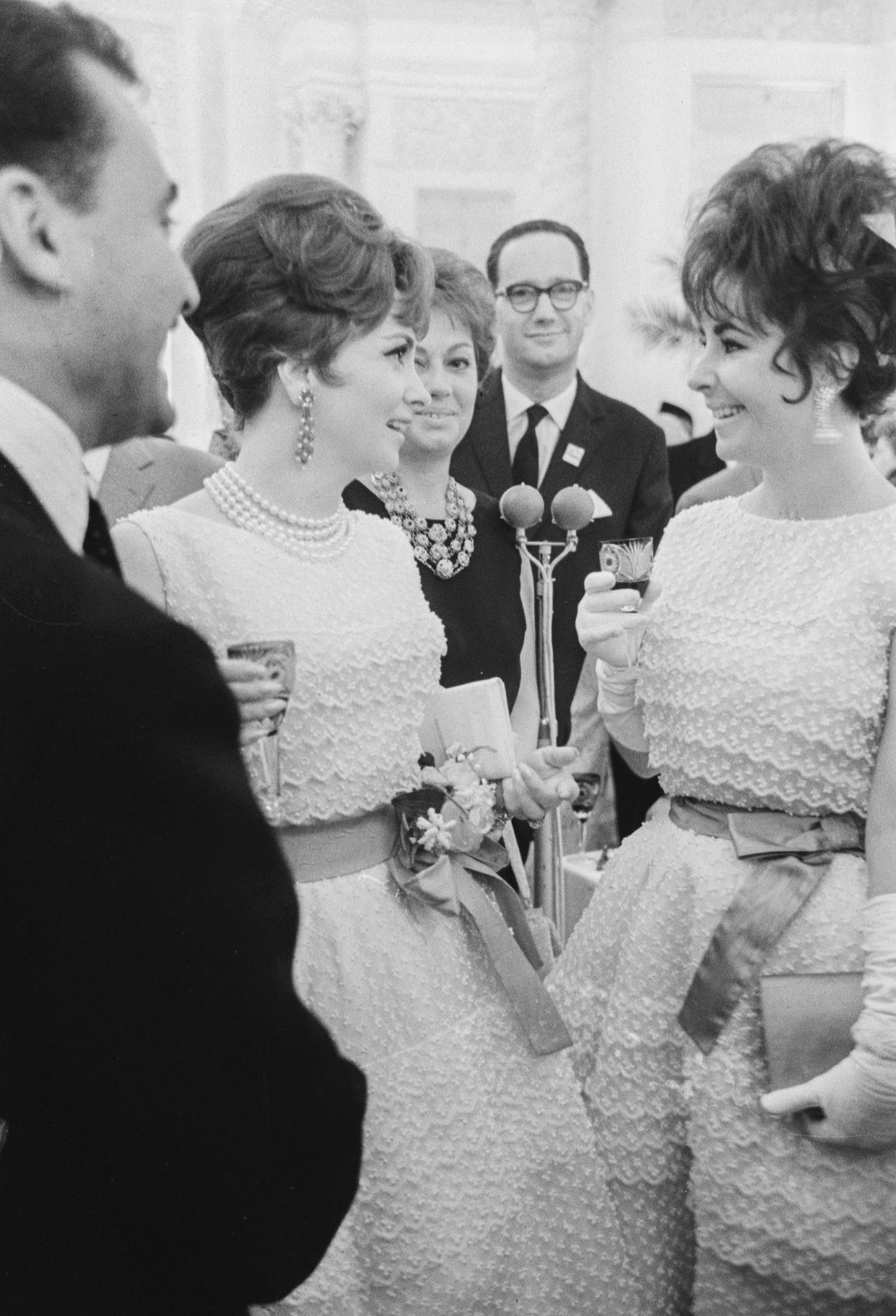 Many foreign movie stars came to the 2nd Moscow International Film Festival in 1961. Soviet cinema-goers were delighted, since, until the late 1950s, foreigners had been rare guests in the Soviet Union. These two favorites of the public caused a furore - they turned up on the red carpet… wearing the same dresses. Anyway, the actresses took it in their stride. But the media distinguished themselves - being an emotional Italian, Lollobrigida kissed Yuri Gagarin on the cheek and the media immediately concluded that the two were having an affair. 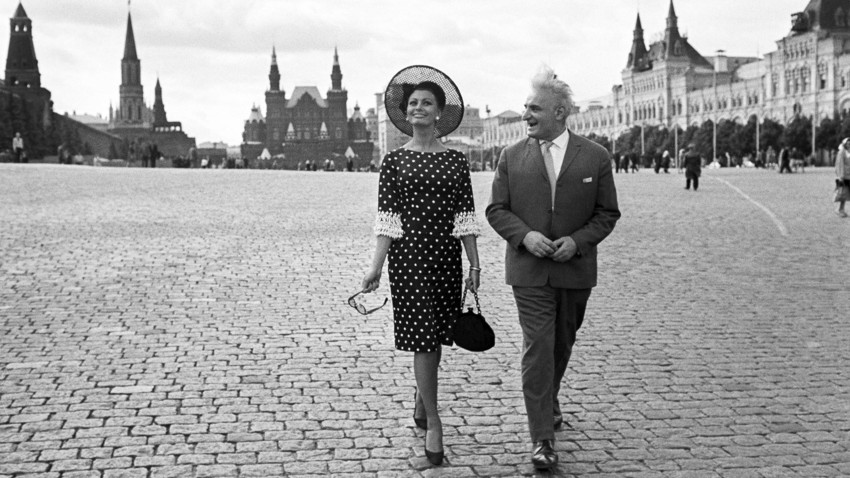 Sophia Loren came to the USSR in 1964 to present the movie Marriage Italian Style at the Moscow International Film Festival. She won the Best Actress award for her role in it. After that, Loren visited the USSR and post-perestroika Russia on many different occasions. To Soviet cinema-goers, she almost became “one of us” after Sunflower, a movie in which she co-stars with Marcello Mastroianni. They play a husband and wife separated by war - most of the filming took place in the USSR and Moscow. 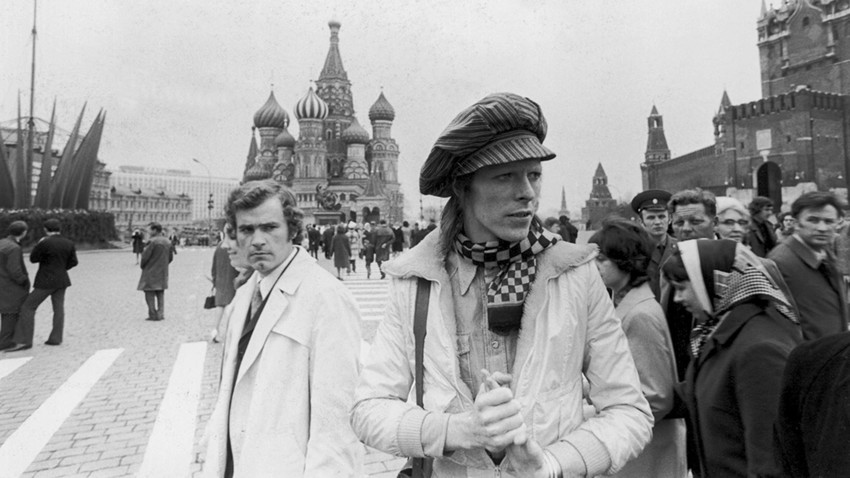 David Bowie did not just visit Moscow and Leningrad, but also travelled on the Trans-Siberian Railway! After a tour of Japan in 1973 he got on the train in Vladivostok, crossed the whole country and arrived in Moscow. At the time Vladivostok was a closed military port, so it remains a mystery how Bowie got there in the first place. But a lot of legends have grown up around the story, including how Bowie gave a small street concert in Vladivostok. 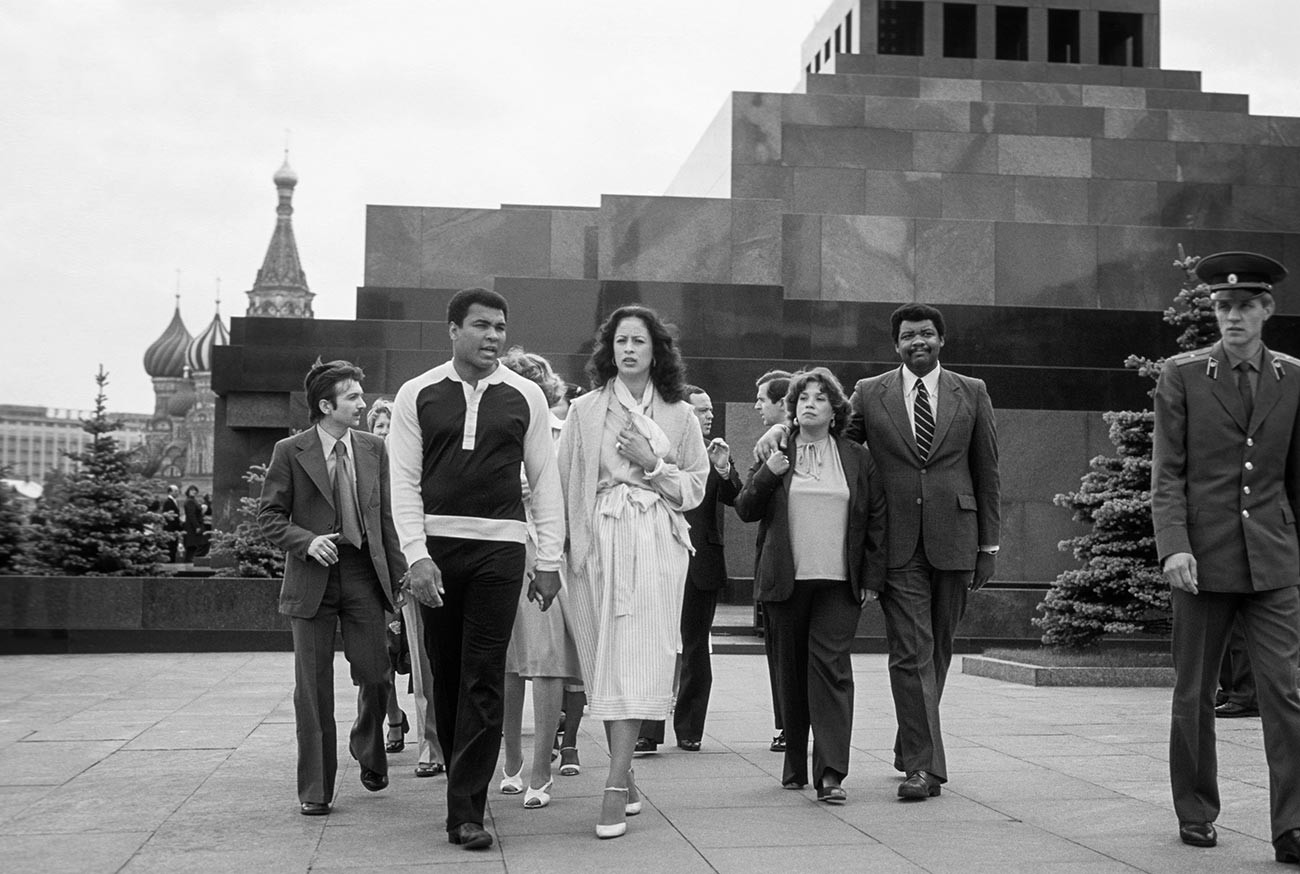 Muhammad Ali came to Moscow in 1978 at the invitation of the Soviet ambassador. The legendary athlete was given a royal welcome and Leonid Brezhnev received him in the Kremlin with all due honors. The guest was also taken to the Uzbek Soviet Socialist Republic to see the beauties of Tashkent, Bukhara and Samarkand. Upon his return, Ali, on his own initiative, organized demonstration fights with Soviet boxers. However, a year later, when the USSR invaded Afghanistan, Ali was already campaigning for a boycott of the 1980 Olympic Games in Moscow.

Arnold Schwarzenegger on Red Square during the filming of 'Red Heat'

Schwarzenegger first came to Moscow in 1988 during the filming of Red Heat when this legendary photograph of him on Red Square was taken. Also, some episodes in the film were shot in Sanduny Bath House. The actor only spent a few days in Moscow, but found the time to meet his idol - Soviet weightlifter Yury Vlasov - and visited the Atletika sports club.