2013 will not be easy for Russian diplomacy 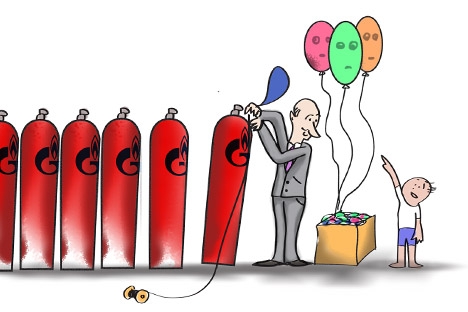 Russia is expected to face several challenges in foreign policy in 2013.

Drawign by Niyaz Karim. Click to enlarge the image.

In 2013, Russia faces some severe challenges on the foreign policy front. Its ongoing integration with Belarus and Kazakhstan is fraught with problems, the European gas market is becoming less pliable, and the Asian market is still unable to pick up the slack.

Officials unanimously agree that the main leitmotif of foreign policy this year will be the strengthening of the tripartite alliance between Russia, Belarus, and Kazakhstan. The Customs Union, which has since morphed into the Single Economic Space, intends to rebrand itself in 2015 as the Eurasian Economic Union (EEU) — the post-Soviet equivalent of the EU.

President Putin, who once described the collapse of the Soviet Union as "the main geopolitical catastrophe of the 20th century," considers the EEU just about the most important project of his third term.

However, in recent months, serious obstacles have appeared on the road to its formation. Whereas the main battles within the Customs Union were fought between Russia and Belarus during Dmitri Medvedev's presidency, now unforeseen complications have arisen in dealings with Kazakhstan, which is the driving force behind the integration.

"The attitude of our elite to the whole project of Eurasian integration is gradually changing. They used to be sure that the country would benefit from lower taxes, but now the picture is less clear," said a source close to the government of Kazakhstan.

Moscow and Astana will have to seek some kind of formula of interaction that is centered on economics. Otherwise, another megaproject will fall on the shoulders of the Russian treasury. The Eurasian project cannot be abandoned.

Perhaps the toughest test of Russian diplomacy lies to the west. The "shale revolution" in the U.S. has changed the face of the European and global gas market.

Middle Eastern liquefied natural gas (LNG), once bound for the U.S. market, is now finding its way to the EU and forcing down prices on the spot market. The foundation upon which the European gas market has stood firm for many years — namely, long-term contracts on the "take-or-pay" condition (whereby the supplier charges penalties for failure to take a minimum amount of gas) — has been shaken.

Gazprom has seen its positions undermined, and its share of the European market is steadily falling.

In next five years, Russia risks losing a significant source of budget revenue. Therefore, Moscow's priority should be to strengthen ties with Europe and map out a common understanding of where the energy sector is moving.

Another critical issue for Russia is how to enter Asia's burgeoning hydrocarbon markets. Demand for oil and gas, especially in East and Southeast Asia, is growing steadily. This could provide Gazprom and Russian oil companies a viable alternative to Europe. The main problem here, however, is lack of transport infrastructure.

Negotiations on the construction of two gas pipelines to China began in 2006, but the two sides have yet to see eye to eye. The reason is that Gazprom is still demanding China pay the same price it gets for raw materials under long-term contracts with European customers. Given the availability of cheaper options, the Chinese are in no hurry to commit.

Gas agreements are by no means the only issue on Moscow's Asian agenda. The main problem is investment, without which the development of mineral resources in Eastern Siberia and the Russian Far East looks infeasible.

There is no traction at all on this matter, not even at a purely formal level. For instance, following the APEC summit, at which Russia took great pains to assert itself as a major power in the Asia-Pacific region, Russia's leaders ignored the East Asia Summit for the second year in a row. This was despite the fact that Barack Obama, Wen Jiabao, and the leaders of Japan, South Korea, Australia, and the ten ASEAN countries all found the time to attend.

The growing force of "soft power"

Over the past year, Russian authorities' interest in "soft power" has increased dramatically — especially President Putin's. This mild and seemingly harmless tool caught the Kremlin's eye during the "Arab Spring," which many Western commentators dubbed the "Twitter revolutions," highlighting the increasing role of soft power in the cat-and-mouse game between citizens and the governments that want to control them.

The upgraded Federal Agency for the Commonwealth of Independent States, Compatriots Living Abroad and International Humanitarian Cooperation (shortened to Rossotrudnichestvo) will be charged with tackling this issue, through the use of tools such as TV channel RT, the Russkiy Mir Foundation, and U.S. and EU-based think tanks on the problems of democracy.

Last year, however, the entire soft power project was struck a mighty blow. The main item on the international media agenda in 2012 was the case of Pussy Riot, which claimed the top ten most frequent queries in Google's events category (Google Zeitgeist).

Russia has a lot of work to do in improving its image over the coming years, but this requires nationwide reform and, as taught by Joseph Nye, a reality that other countries find attractive. Such miracle-working is, as of yet, beyond even the most skilled Russian diplomats.

Alexander Gabuev is the deputy editor-in-chief of Kommersant Vlast and an expert on Chinese studies. The opinion is abridged and first published in Russian in the Kommersant-Vlast magazine.