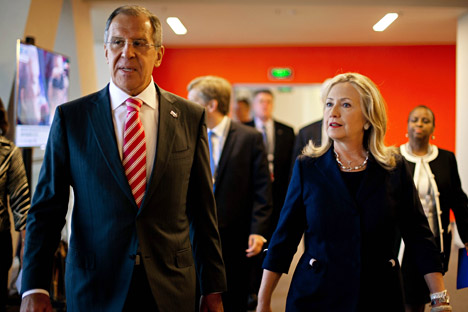 In the wake of U.S.-Russian presidential campaign Russian Foreign Minister Sergei Lavrov talks about the achievements of U.S.-Russia reset and the major problems that hamper strategic collaborations between two countries.

{***Reaping the fruits of the U.S.-Russia collaboration***}

Reaping the fruits of the U.S.-Russia collaboration

"For us, the United States is not a foreign enemy," he said. "Indeed, we have no enemies – foreign or otherwise. And we are not planning to make any for ourselves. There are countries that create the image of a foreign enemy in order to achieve domestic goals. I think that some politicians in the United States are governed by precisely this desire to strengthen their positions and attract voters with hawkish rhetoric, as if to say: “look how strong and uncompromising we are.”

In the last few years, U.S.-Russia relations have assumed a highly positive dynamic along a number of lines, the diplomat added.

Are we trying to lose Russia again?

Sorting out the reset

"We have never had this sort of mechanism before. There was the commission of Viktor Chernomyrdin and Albert Gore, but that concerned itself only with economics. The current Presidential Commission concerns itself with all matters on our bilateral agenda, including economics, journalists’ contacts in civil society, and connections between military and military-technical questions. So, the Commission marks a transition to a new capacity," Lavrov said.

According to him, Russia and the U.S. have achieved a number of concrete results: they have concluded a new START Treaty (which was welcomed by all) and are now in the process of supervising its implementation with the support of the corresponding mechanism (visits of inspection groups, telemetry, etc.).

In the last few years, the two countries have also ratified the Agreement for Cooperation in the Peaceful Uses of Nuclear Energy, which opens in this sphere the access of Russian services on the markets of third countries. Russia and the U. S. have concluded an agreement to ease the visa regime. Now, business people and tourists may receive 3-year multiple-entry visas and do this more quickly than before, in no more than 10-12 business days.

The two countries only recently managed to bring into force a Cooperation Agreement on international adoptions. This aspect seems, at first glance, a personal matter; but this is a very emotional issue for Russian society, given the tragic incidents that have occurred with adopted children from Russia in American families. Russia has repeatedly expressed our indignation at how the American judicial system deals with U.S. citizens who have adopted children from Russia and then taunted and abused them. Certain incidents have had fatal consequences.

"So then, we have made progress in a number of directions," Lavrov said. "Not to mention the fact that, at the meeting of presidents Vladimir Putin and Barack Obama this past June on the sidelines of the G-20 Summit, trade and economic ties were declared the number one priority. Both Putin and Obama resolved to place special emphasis on stimulating trade and mutual investments. The current volumes are, of course, paltry as compared with the potential of both our countries."

The aim of forming a strategic partnership between Russia and the North Atlantic alliance was established in the Declaration of the Russia-NATO Summit in Lisbon in November 2010. Missile defense is an inalienable element of strategic stability. An agreement to limit systems of missile defense between the Soviet Union and the United States was signed in 1972, at the initiative of the U.S., which was then intent on gaining acceptance of the thesis that strategic stability required a comprehensive approach embracing both strategic offensive and defensive weapons.

"We acknowledged this interconnection, and, since then, it has remained a cornerstone of all our contacts with the Americans that concern problems of nuclear weapons and global parity in the sphere of strategic stability," Lavrov said.

"Therefore, when the U.S. Administration decided to withdraw from this Agreement and undertake the creation of a global system of missile defense, President Putin said that, while we could hinder the implementation of such a decision, it would return us to the old days and undermine trust between our countries," Lavrov added. "And then George W. Bush said that we are no longer enemies, so, “do what you like; we will implement our system ourselves.”

"But we realized that all this could make for additional and utterly unneeded complications; and, therefore, in 2007, President Putin proposed jointly developing an anti-missile defense. The corresponding proposals were relayed on the sidelines of the G-8 Summit in Heiligendamm in June 2007 and, then again, in early July 2007, in Kennebunkport at an informal meeting between the two presidents," he said.

According to Lavrov, these proposals were dictated by a desire to really, qualitatively change the nature of U.S.-Russia relations in the sphere of nuclear weapons and strategic stability, as a whole.

In a broader sense, Russia has proposed that the conclusion of an agreement on Euro-Atlantic security be considered an important idea.

"In the framework of the Organization for Security and Co-operation in Europe (OSCE) and the NATO-Russia Council, we have long declared it a political obligation that no nation should strengthen its security at the expense of the security of other nations," Lavrov said. "But this declaration, unfortunately, is not working. Consequently, we have proposed concluding a corresponding agreement that would make this not just a political, but a legal obligation."

The Russian Foreign Minister argues that Russia's Western partners, who avoid this subject in conversation, keep asking: “Why do you need such an agreement?”

"The United States’ global system of missile defense would entail creating bases in Poland, Romania and in the Mediterranean Sea," Lavrov said. "This is all very close to the borders of the Russian Federation. Bases in Poland and Romania would be in direct violation not of the legal obligation, but of the political obligation assumed by members of NATO to not place military infrastructure sites on the territories of new members of the alliance. That is why we need legally binding agreements."

When asked about the results of the upcoming presidential election in the U. S., Lavrov said that Russia will work with those leaders who are in power and elected by the people.

"There are many examples in history when campaign rhetoric got out of hand," he said. "But, when the winner of the election sits down to work, he begins to tackle specific items of business. Only then can one judge the true intentions of this or that administration. I am sure that, no matter what happens and no matter who wins, relations between the United States and the outside world won’t disappear; and relations with Russia in this context for any American administration will play a far from small role."