How many days in Moscow is enough? 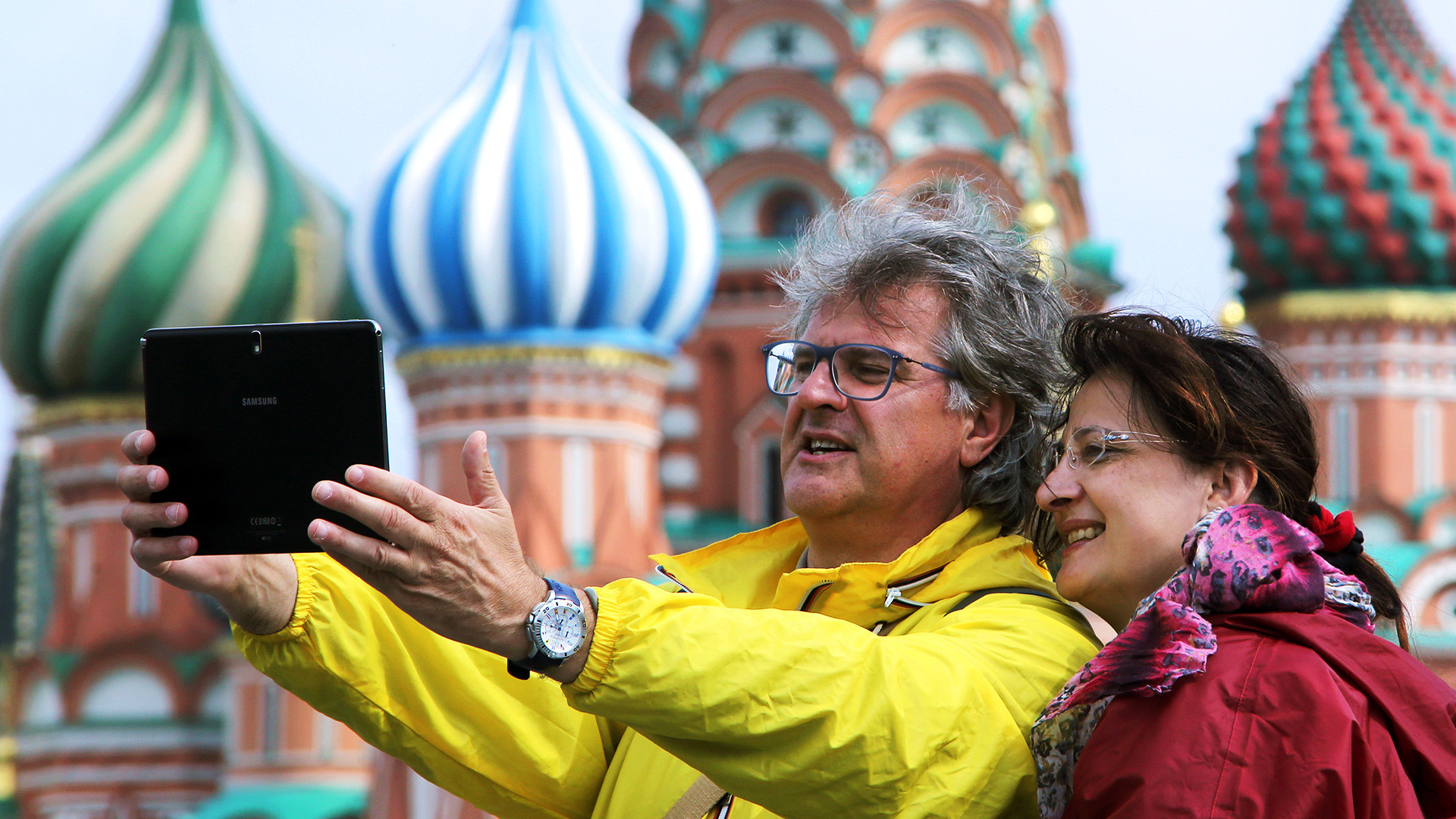 Sergei Shakhidzhanyan/TASS
It’s not a trick question! Check our day-by-day guide for a self-guided tour that can help you get around on your own - by foot or using the Moscow Metro!

You can spend your whole life in Moscow and still discover a new sight every day: There are so many interesting things! We’ve put together a plan of what to see over a weekend, a few days or even a full week.

What to see in Moscow in one day? 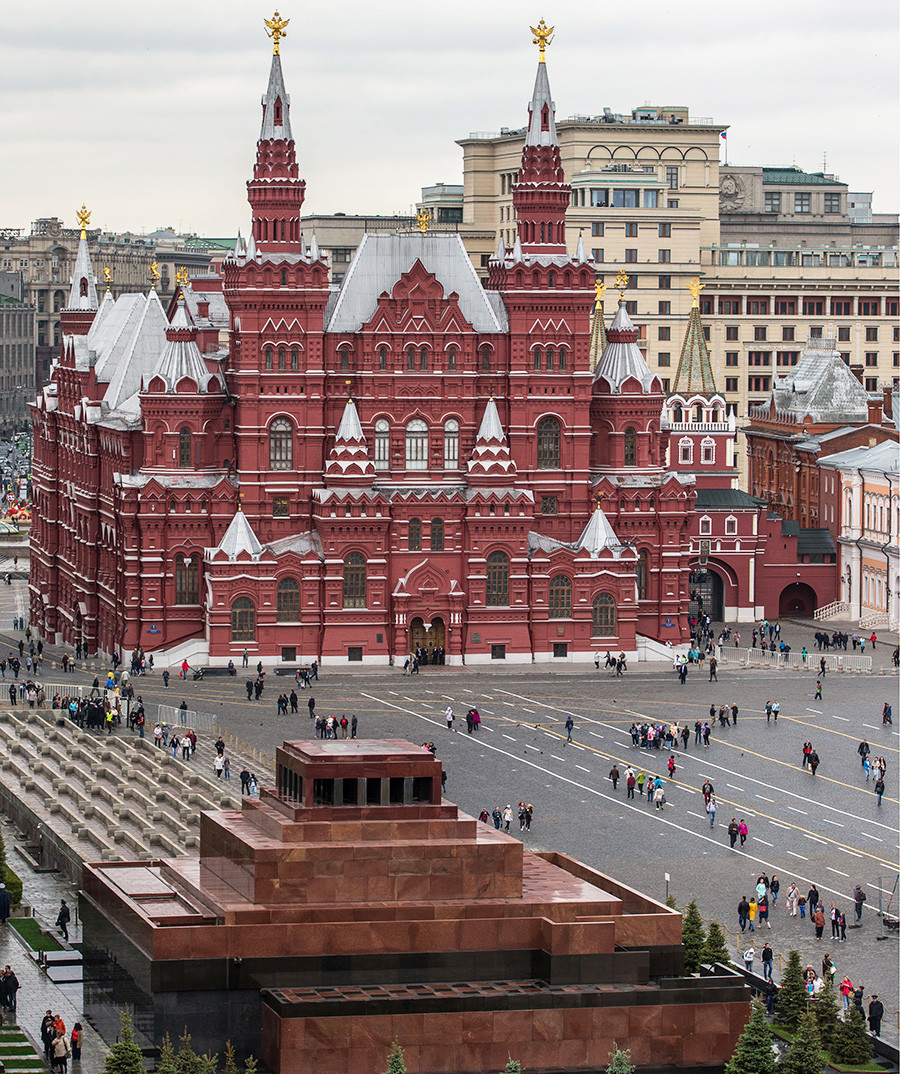 If you only have one day in Moscow, choose the “traditional” route. Exit at metro station Охотный Ряд (“Okhotny Ryad”), Театральная (“Teatralnaya”) or Площадь Революции (“Ploschad Revolutsii”) and head straight to the Red Square. Before entering the square, you will see the so-called “Kilometer Zero” – they say that any wish here comes true. Here you can most likely see the crowd favorite impersonators of Stalin and Lenin and who knows - maybe even Putin.

Entrance to the square is open around the year (and free!), except for the morning of May 9 (Victory Parade Day) and a few other special events. It’s better to come here in the morning: you’ll have more time to check out the Mausoleum, museums and cathedrals. Red Square frequently becomes a temporary home for various activities: concerts, book fairs, Christmas markets. Oh, and in winter, there’s even an ice rink there.

For visiting the Kremlin itself, it’s better to reserve at least half a day: the territory inside is huge. Get to the entrance through the Александровский сад (“Alexander Garden”) right to the glass house ticket offices. 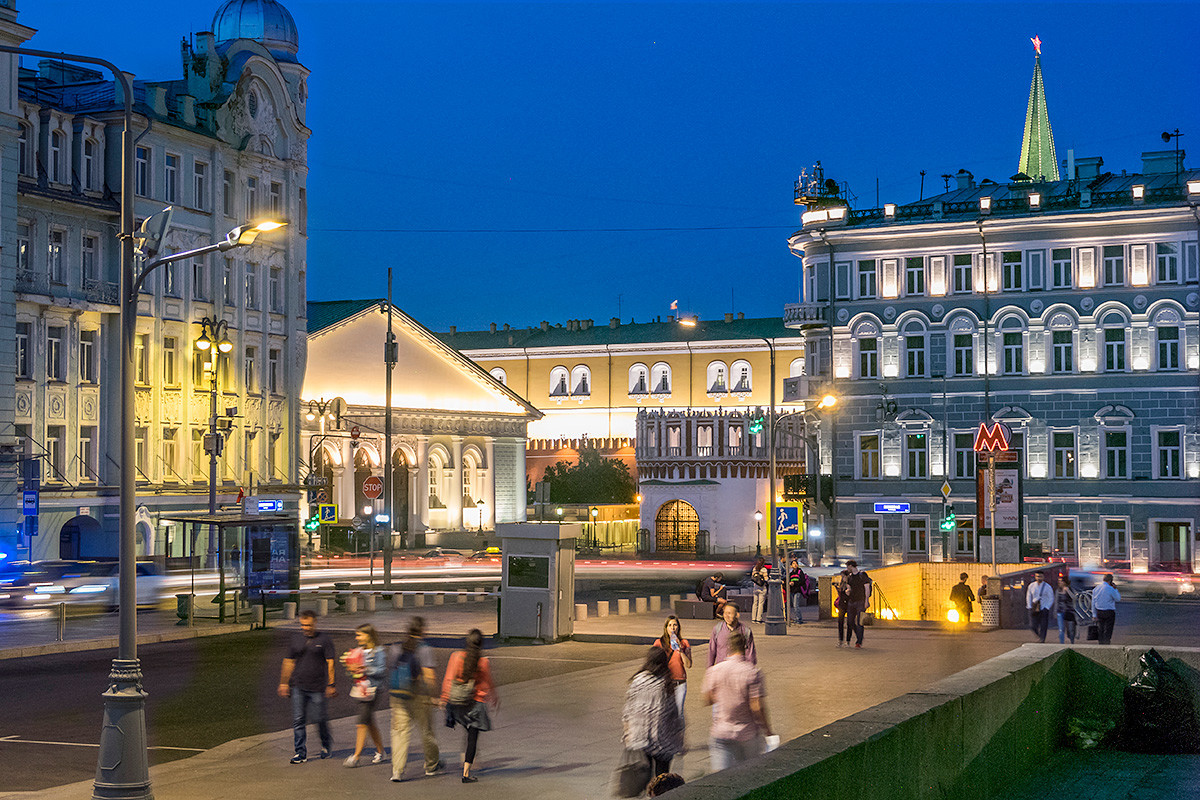 To get to the main pedestrian street called Арбат (“Arbat”) after you’re finished with the Kremlin, cross the road to the north of Alexander garden via an underground pass and go up across Воздвиженка (“Vozdvizhenka”) Street for about 5 minutes. Along the way, stop by the Lenin State Library.

What to see in Moscow in two days?

The new Zaryadye Park, stretched along the Moscow River, is definitely worth visiting! Hug a Russian birch, walk along the “floating bridge” and find yourself inside a real ice cave. The closest metro station to visit the park is Китай-город (“Kitay Gorod”). 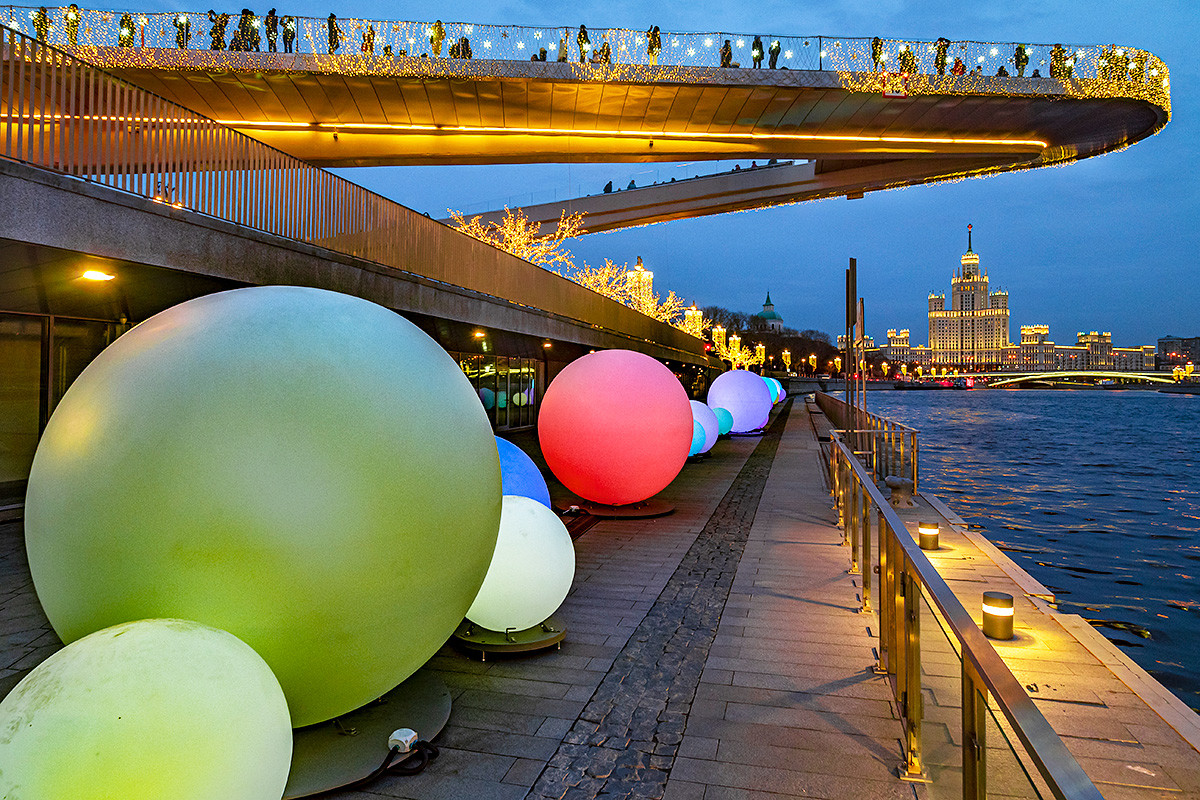 Exit the park in the direction of the GUM shopping mall and walk through its inner gallery (but be warned! No one has ever left GUM without tasting their legendary ice cream!) and you’ll get to another pedestrian street called Никольская (“Nikolskaya”). You can’t miss it: It’s full of tourists, street musicians, and cafes. 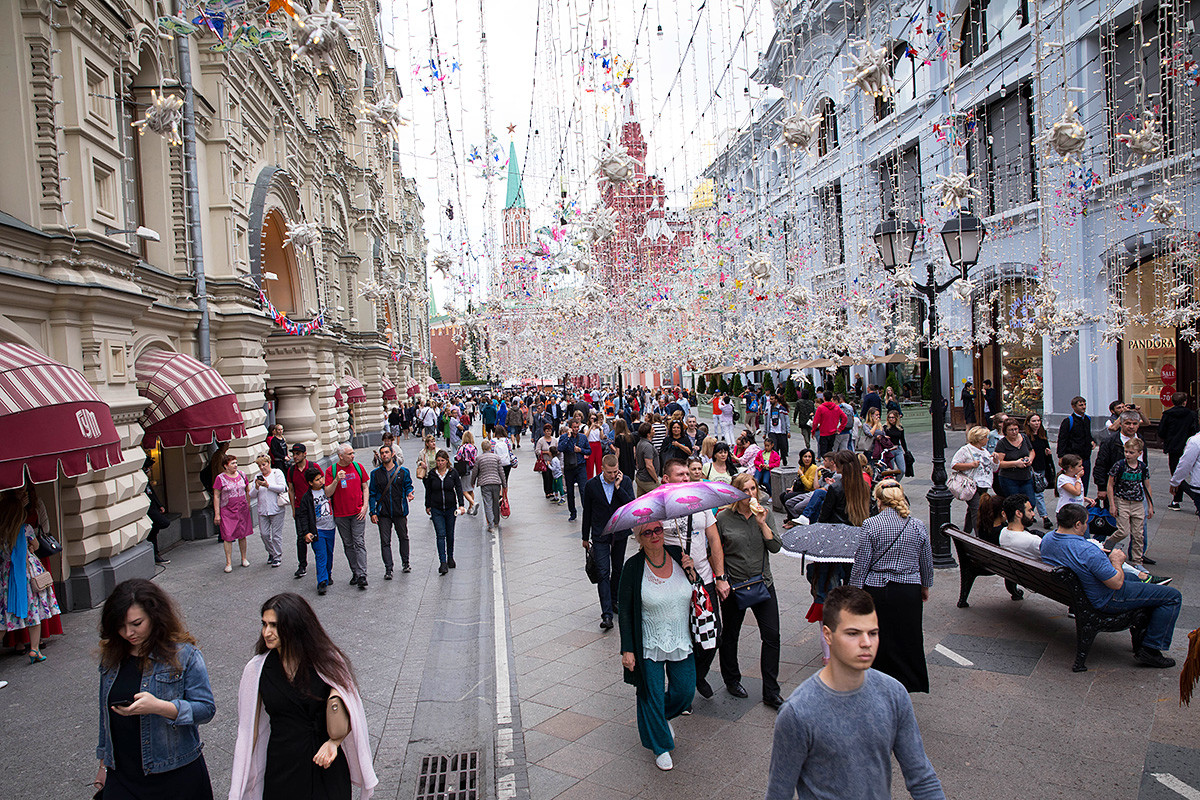 Go downstairs to the Площадь Революции (“Revolution square”), and across the road, you will see the Bolshoi Theatre (read about how it’s got its name here). And here’s how you can get there. On the right side of the Bolshoi you can find the luxury TSUM shopping mall. On the left, you’ll find Большая Дмитровка (“Bolshaya Dmitrovka”) street with many nice places for coffee and/or lunch (check out our guide to the culinary streets of Moscow. Bolshaya Dmitrovka runs parallel to the main street of the city, Тверская (“Tverskaya”). 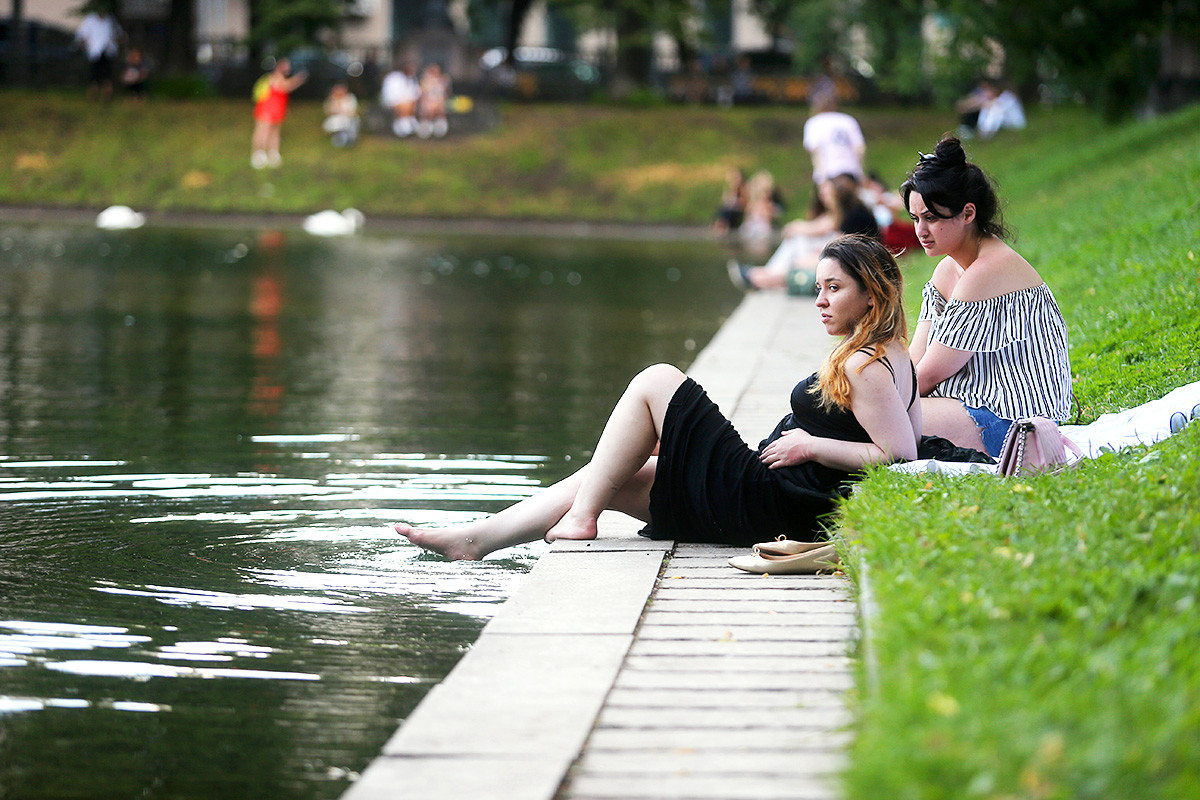 If you are still up for more walking, stroll all the way up Tverskaya Street to the Маяковская (“Mayakovskaya”) metro station and go to the left along the Садовое кольцо (“Garden Ring”) road. You’ll see the Tchaikovsky Conservatory, the Bulgakov Museum (and its guard, Behemoth the Cat, and after another left turn, you’ll find Патриаршие пруды (“Patriarch ponds”) (considered the most popular area among expats). Going further along the Garden Ring, you will see the Planetarium and the Moscow Zoo. Still feel your feet? Follow along the Красная Пресня (“Krasnaya Presnya”) street and in 20 minutes or so you will see the Moscow City skyscrapers and be able to get a closer look at them.

What to see in Moscow in three days?

Museums – the Cathedral of Christ the Savior – Red October

Get off at the Боровицкая (“Borovitskaya”) or Кропоткинская (“Kropotkinskaya”) metro stations and check out some of Moscow’s museums, including its most famous one – the State Pushkin Museum of Fine Arts. 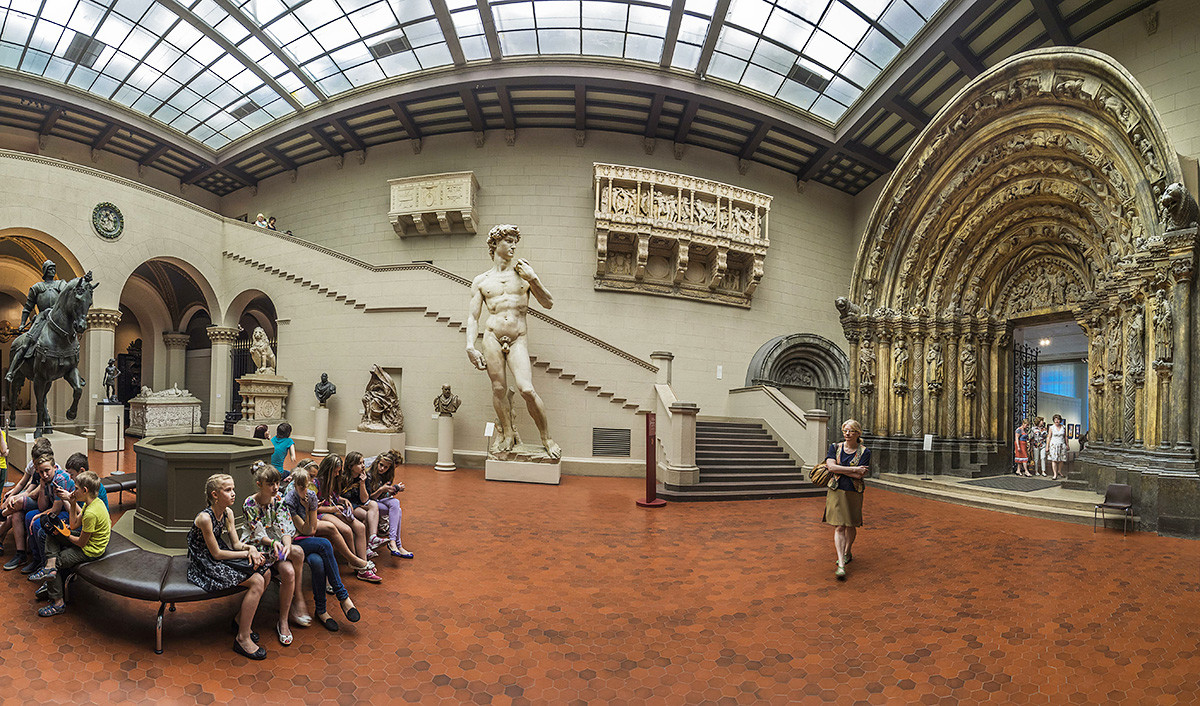 Along Волхонка (“Volkhonka”) street you will find the Храм Христа Спасителя (“Cathedral of Christ the Savior”) Russia’s largest Orthodox cathedral. Admission is free, but you must follow the dress code. You can also get to the observation deck at the top of the Cathedral for a small fee. The view from the top is breathtaking!

View of Moscow from the Cathedral of Christ the Saviour.

Behind the cathedral, there’s the pedestrian Патриарший Мост (“Patriarch Bridge”), which offers spectacular views to the Kremlin and the giant monument of Peter the Great. The bridge leads to the Болотный Остров (“Bolotny island”) which was home to the former Red October candy factory. Now the area is gentrified and filled with trendy cafes, creative spaces and offices. Walk across another bridge – and you’ll find yourself on Кадашевская (“Kadashevskaya”) embankment. The State Tretyakov Gallery, with all its masterpieces of Russian art, is in walking distance to your right (when facing the Cathedral of Christ the Savior). And Museon park is to your left.

What to see in Moscow in five days?

The nearest metro stations to the Museon are Октябрьская (“Oktyabrskaya”) or Парк культуры (“Park Kultury”). There’s another department of the Tretyakov gallery here which hosts more modern and contemporary collections. The park itself is a mix of bike lanes, fountains and artworks sold in the open air. 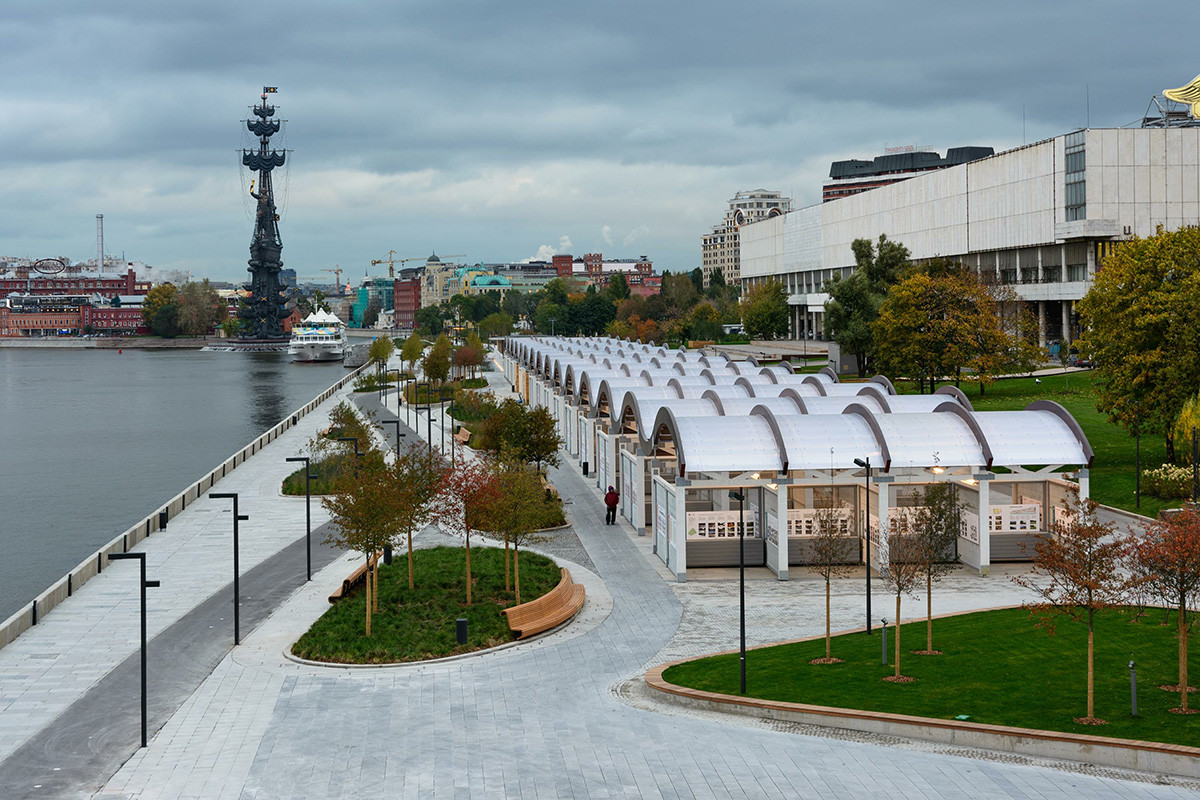 The end of Museon park marks the very beginning of the famous Gorky Park (Парк культуры и отдыха им. Горького), where you can easily spend the whole day. Contemporary art fans should visit the Garage Museum, sport enthusiasts can rent a skateboard or a bike in the park and ride along the beautiful embankment to the Воробьевы горы (“Vorobyovy hills”) It take up to 20 minutes and 1 hour by foot. In summer, you can take a river boat. 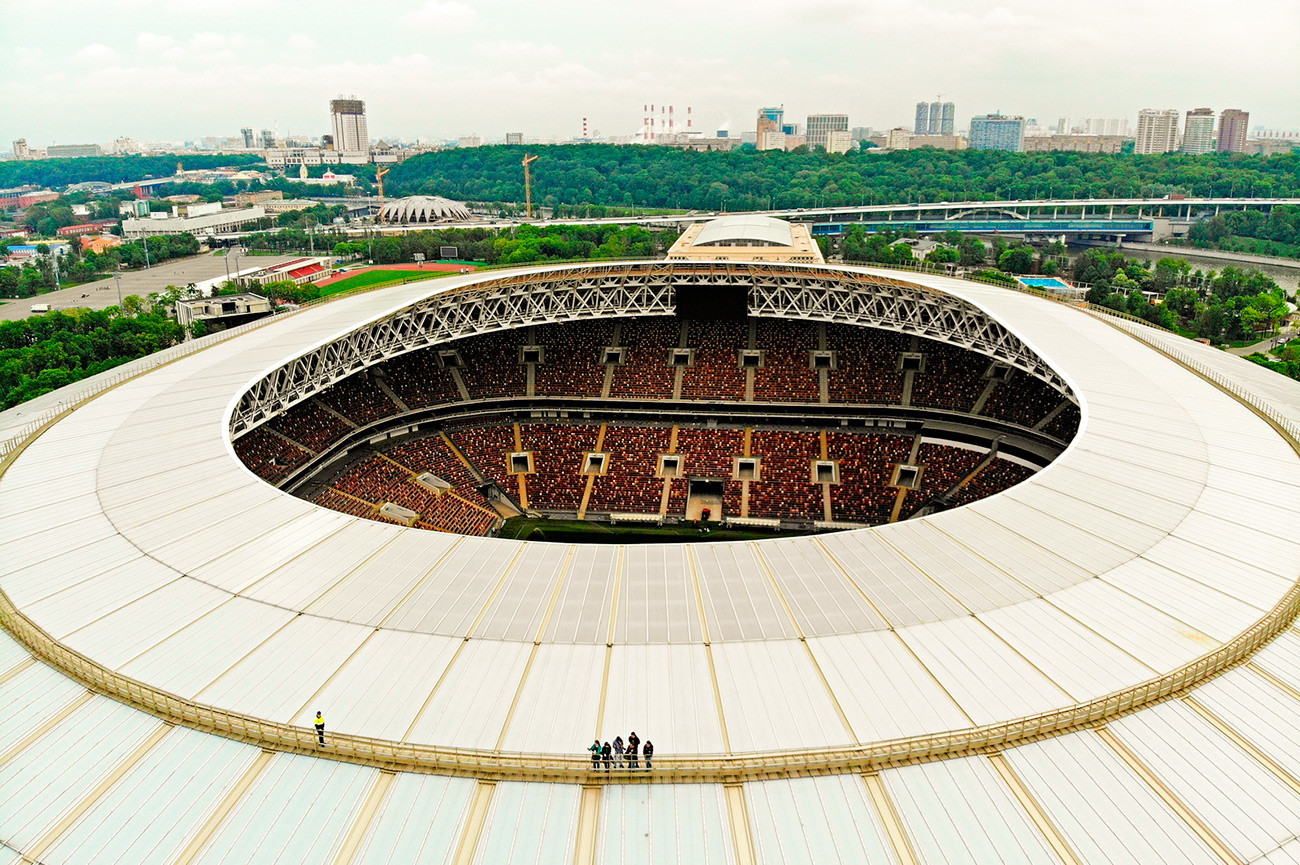 On Vorobyovy hills, climb to the observation deck next to the Moscow State University and then take a ride on the cable car across the Moscow River down to the Luzhniki Stadium (in summer, you can walk along the stadium’s roof). You can go back the same way to the Воробьевы горы (“Vorobyovy Gory”) metro station or walk from the stadium to Спортивная (“Sportivnaya”) station in about 15 minutes.

What to see in Moscow in a week?

Then it’s time to go beyond the city center! All fans of Soviet monumental architecture should visit the place called ВДНХ (“VDNKh”) (the nearest metro station bears the same name). This is a huge themed park, where you can see impressive exhibition pavilions and ride the unique Moscow public transport Monorail. And you know what? The entrance is free! The park can lead you all the way to the Ботанический сад (“Botanical garden”). 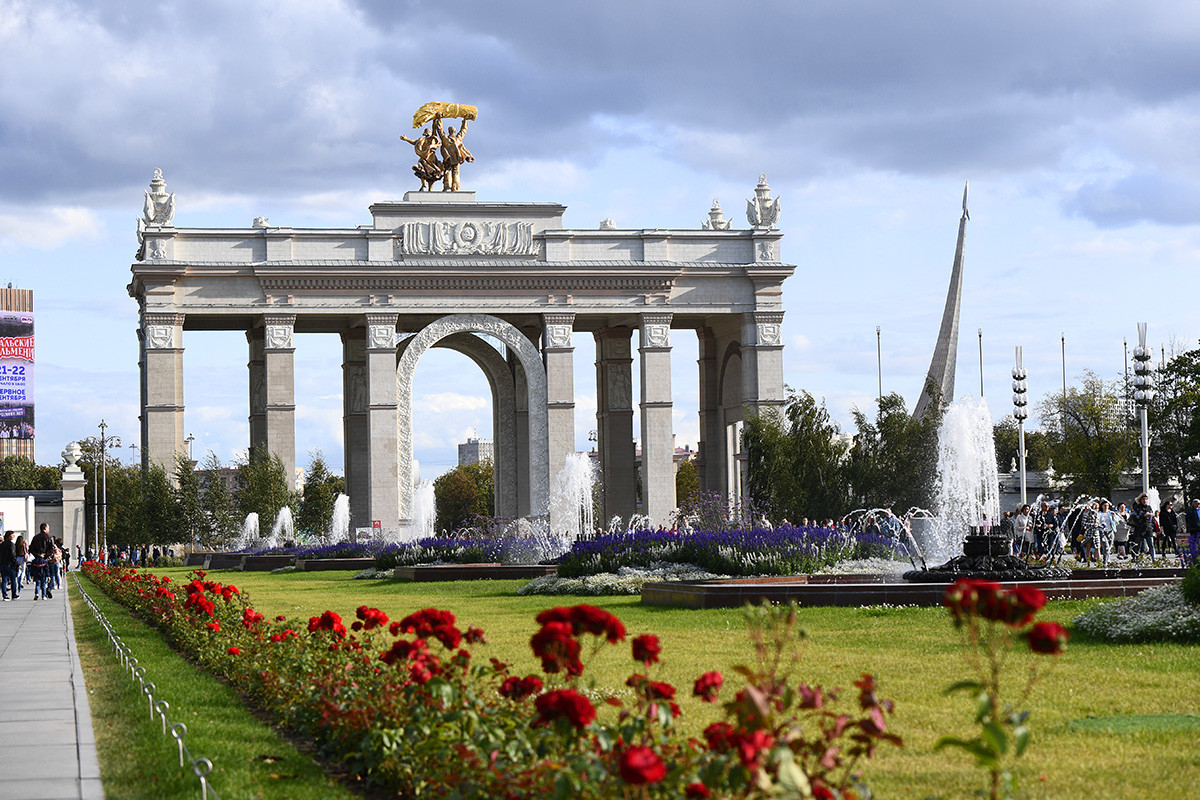 Another option for an extra day in Moscow is to visit the Поклонная гора (“Poklonnaya hill”) where the Парк победы (Victory Park) is located, one of the largest WWII memorial complexes. Find the metro station with the same name (Park Pobedy) and you won’t get lost. 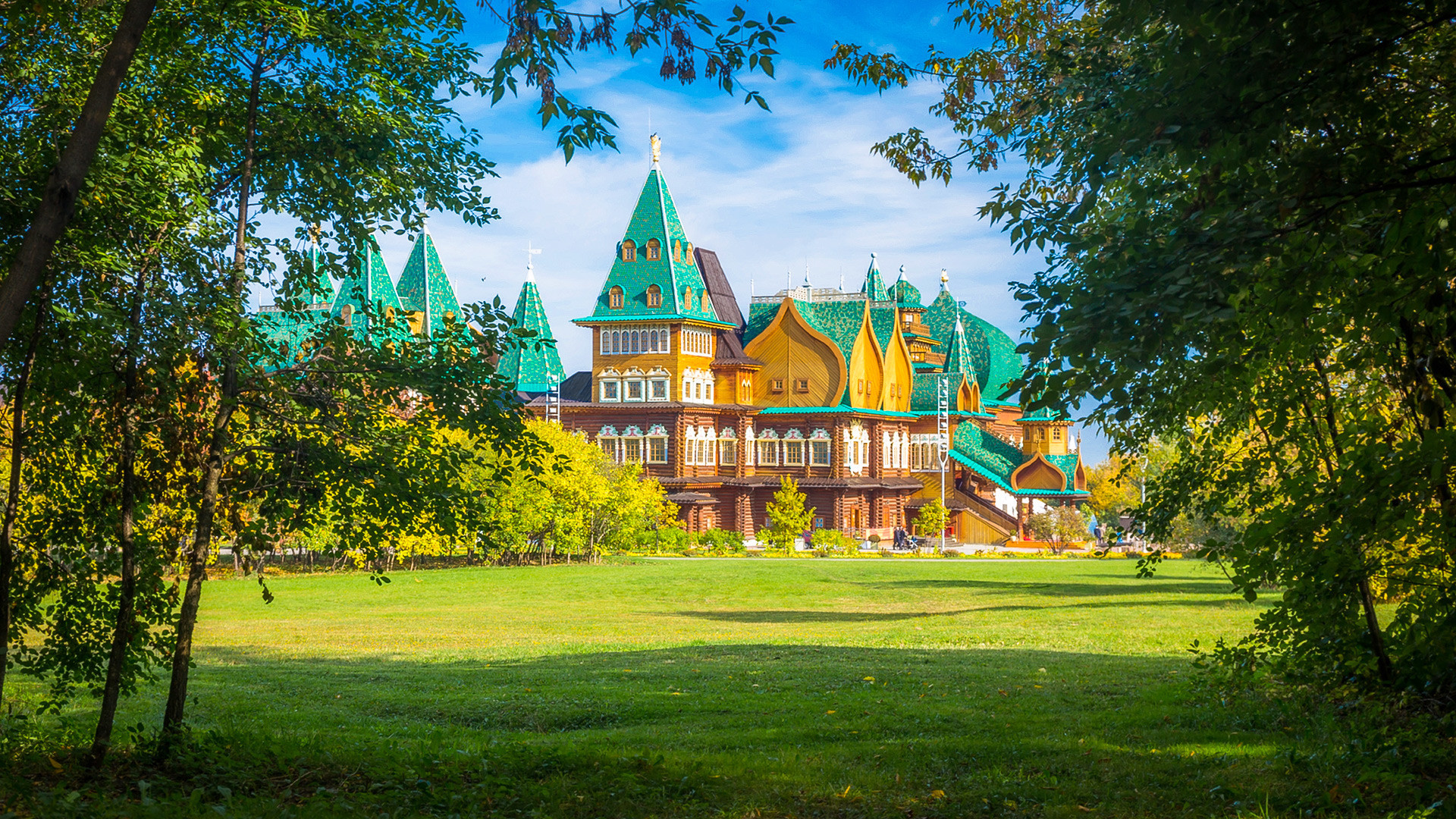 In the south of Moscow, you can visit Царицыно (“Tsaritsyno”) and Коломенское (“Kolomenskoye”) parks (again, look for the metro namesakes) with former Tsars’ palaces. In the east of Moscow, there’s also the beautiful old noble estate Кусково (“Kuskovo”) surrounded with forest. Oddly, the closest metro station is not called Kuskovo, but Рязанский проспект (“Ryazansky Prospect”). You can also find the Измайлово (“Izmailovo park”) (Партизанская [“Partizanskaya”] metro station), which has its own Kremlin!

Looking for a short day trip around Moscow? Check out what to do here.