Everything you wanted to know about Russia’s Golden Ring 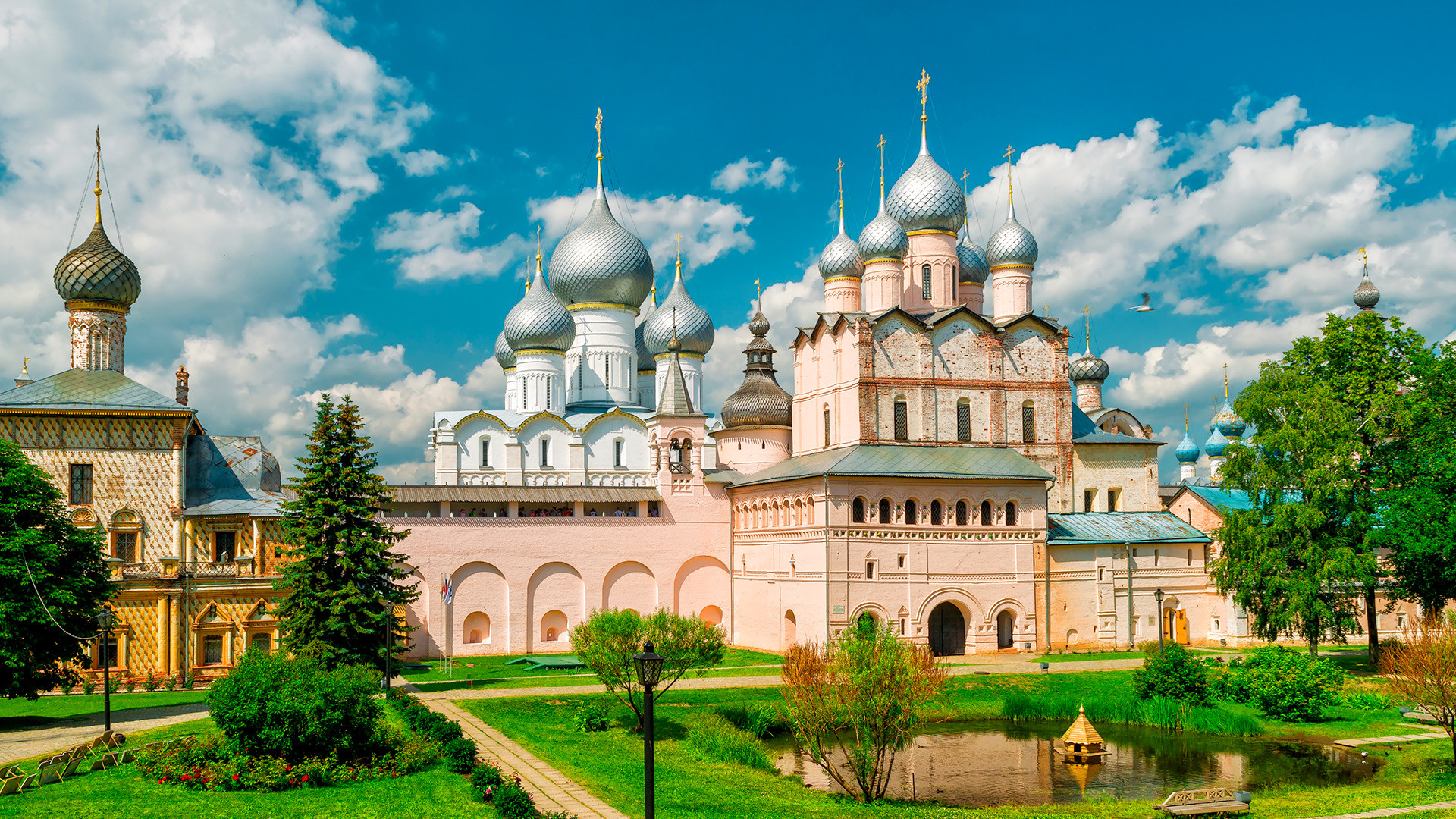 Russia’s Golden Ring is a tourist route that was drawn up during the Soviet era, with the idea of boosting the numbers of foreign tourists traveling to the country. Today, it remains one of the most popular routes for both tourists and domestic Russian tourists.

Why was it called so?

In 1967 art historian and journalist Yuri Bychkov journeyed through the towns of Vladimir Oblast to write a series of travel articles. The last city he visited was Yaroslavl, so his route took the form of a ring. Later he published his travel notes under the name “The Golden Ring.”

Which cities are included?

Actually there is no official list of which cities make up the Golden Ring, with the exception of the eight principal cities of Yaroslavl, Kostroma, Ivanovo, Suzdal, Vladimir, Sergiev Posad, Pereslavl-Zalessky, and Rostov Veliky.

Apart from this, the cities of Palekh, Plyos, Shuya, Gorokhovets, Gus-Khrustalny, Murom, Yuriev-Polsky, Rybinsk, Tutaev, Uglich, Kasimov (from 2015), and Kaluga (from 2016) are also considered to be a part of the ring.

The city located on the Volga River some 150 miles northeast of Moscow. Founded in the early 11th century by Yaroslav the Wise - one of the greatest rulers of medieval Rus - by the 13th century, the settlement already had stone churches within monasteries, unusual during a time when most buildings were made of logs. Look at the Church of John the Baptist at Tolchkovo and its magnificent frescoes. The city center is small enough to visit all the main attractions on foot.

And don’t forget to enjoy the bird’s eye view of ancient Yaroslavl! 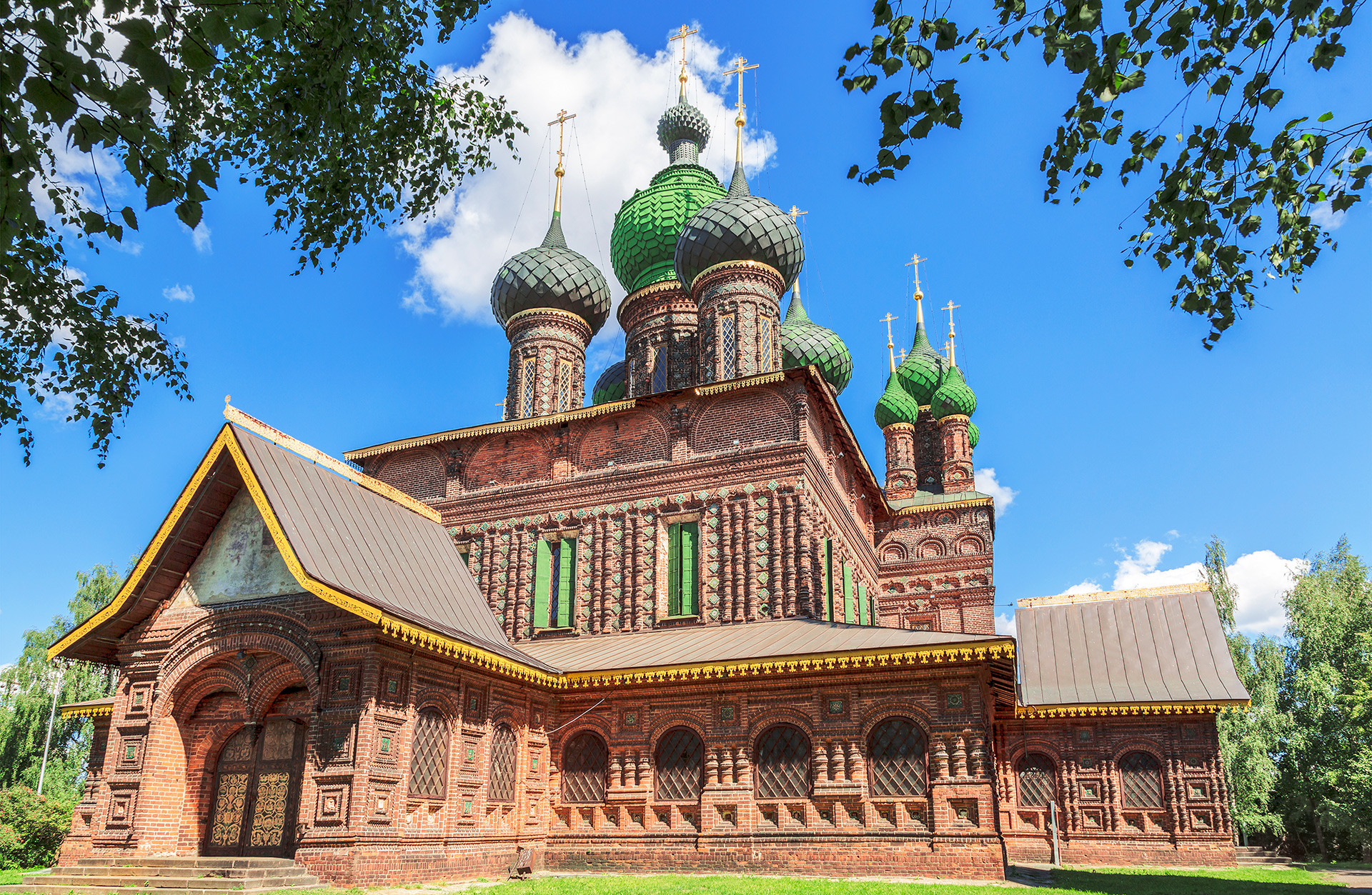 Prince Vladimir Monomach founded Vladimir in 1108 as a defensive outpost. Although the Russian capital moved to Moscow in the 14th century, Vladimir played an important role throughout Russia’s history. Today it’s one of the main stops on the Golden Ring, a rough circle of Russia’s most beautiful cities.

Read what to see and where to go in Vladimir if you have only a few days.

And don’t forget to check the main landmarks of that great city. For example, one of the great masterpieces of medieval Rus’ survives to this day – Cathedral of the Dormition of the Mother of God. 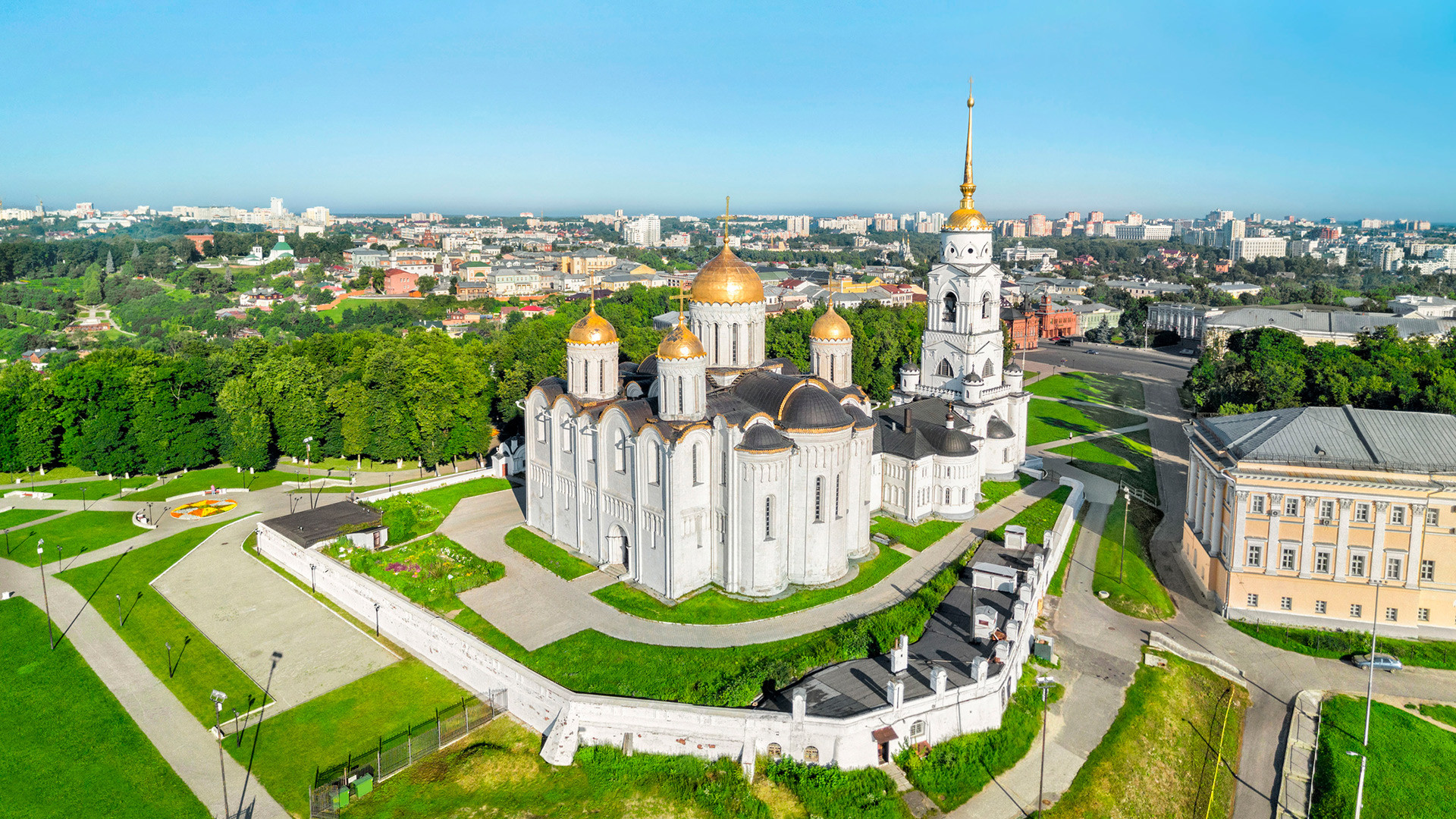 Kostroma is first mentioned in the chronicles in 1213, but is believed by some historians to have been founded by Moscow Prince Yuri Dolgoruky in 1152, making it just five years younger than Moscow.

Today, Kostroma is a river port, a light-industry center and a serene spot on the Volga River with a population of about 275,000 people. The town is actively developing. In recent years, Kostroma has worked to promote tourism by restoring monuments and public spaces as well as designing new excursion programs and investing in city festivals and cultural events.

Take a while and watch the video showing the aerial view of the ancient city.

The Kostroma Region has a wealth of small historic towns, each with a distinctive setting and cultural heritage. Among these is the town of Bui (pronounced like “buoy”), located on the right bank of the Kostroma River some 60 miles north of the city of Kostroma.

Did you know that Kostroma is the original home of Russia’s Snegurochka (snow maiden)?

One of the main landmarks in Kostroma is the Trinity Cathedral at Ipatiev Monastery, which played a critical role in the history of the Romanov family in the early 17th century.

Read how to spend a weekend in charming and slow-paced Kostroma. 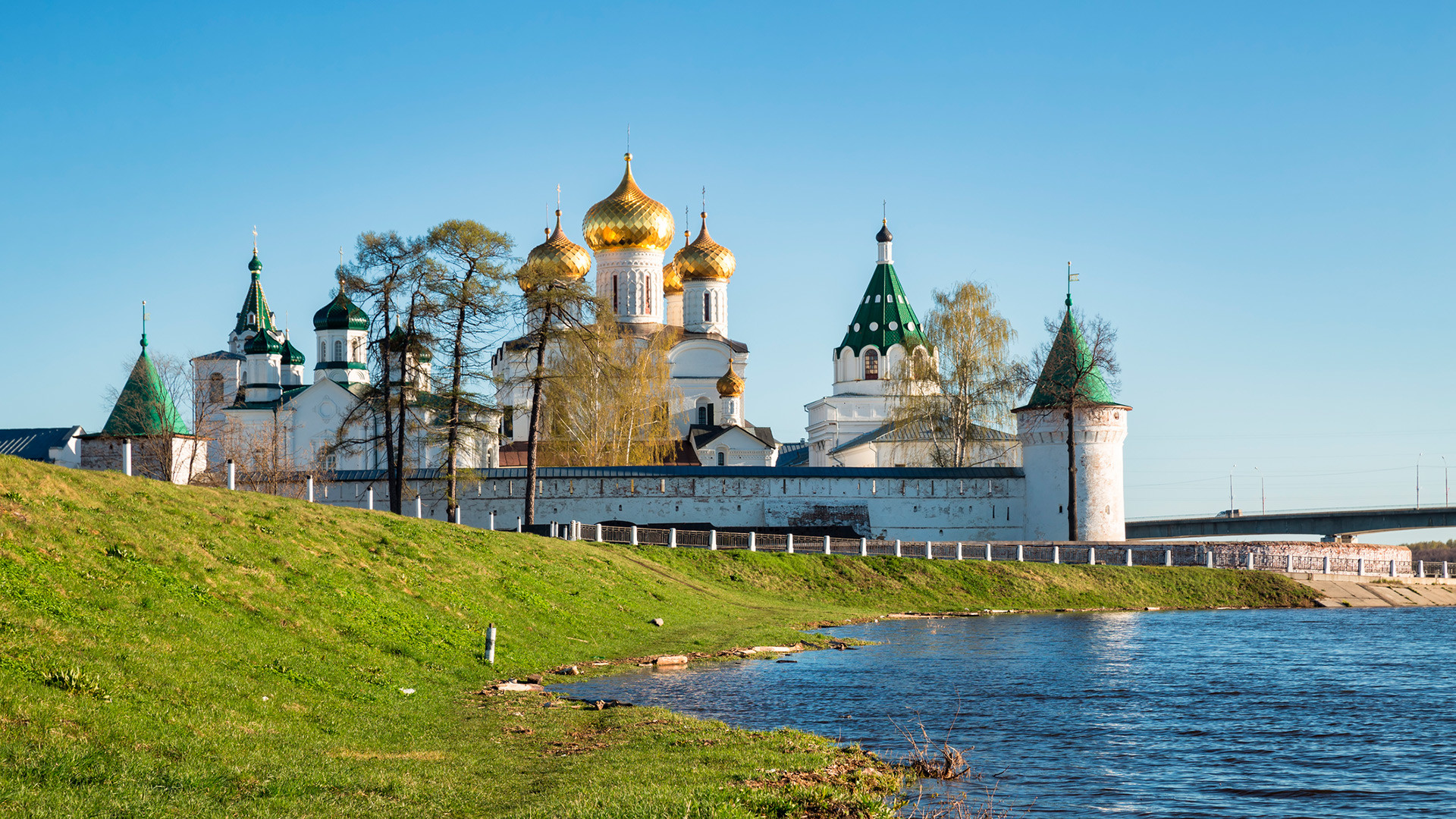 Suzdal is only 137 miles from Moscow. The first record of Suzdal in the chronicles dates back to 1024. In its day, Suzdal was the spiritual center of Old Russia, and this is evident even now. Over an area of 3.5 square miles there are five monasteries, some 30 churches and chapels, and 14 bell towers: More cultural artifacts per square foot than anywhere else in the world, with the possible exception of Old Jerusalem.

Read the story about ancient Suzdal: From Prokudin-Gorsky to the present.

If you want to get away from the typical tourist haunts and have a taste of unadulterated Russian history and tradition in the Golden Ring city of Suzdal, we have some advice about how to spend a great weekend there. And Tim Kirby can tell you how by spending just $100! 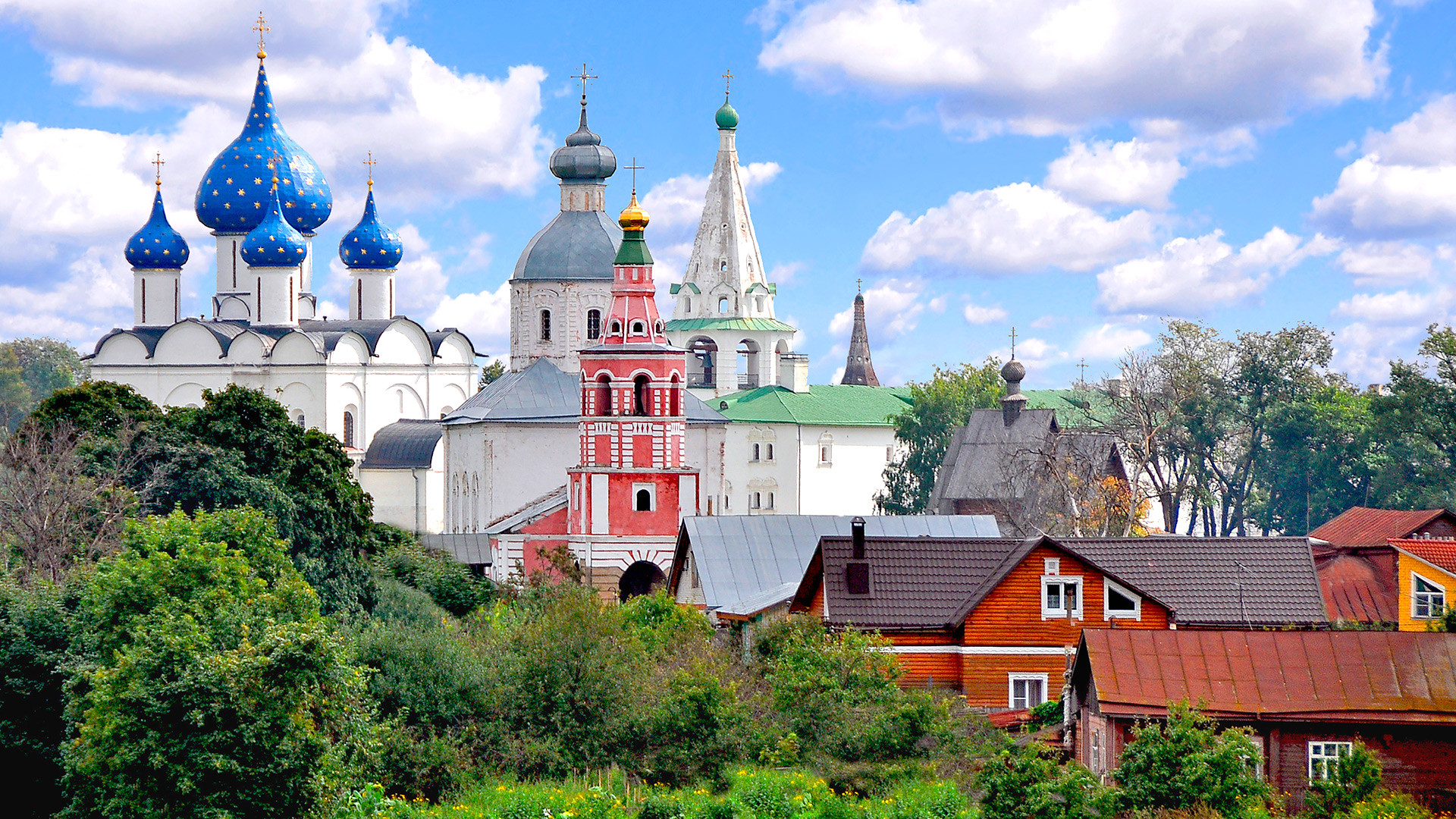 Pereslavl-Zalessky is located near the shores of Lake Pleshcheyev and was established in 1152 by Yuri Dolgoruky, prince of the large territory of Rostov-Suzdal and the founder of Moscow.

Pereslavl-Zalessky has had an extraordinary number of monastic institutions – as many as 12 were located in the immediate area during the mid-18th century.

One of the most important institution was the Goritsky-Dormition Monastery, founded in the early 14th century by Moscow prince Ivan Kalita (1283-1341). Destroyed by the Tatars in 1382, the wooden monastery was quickly rebuilt and became a major center of religious activity. At the beginning of the 16th century another monk from Goritsky Monastery, Daniil, founded the Trinity-Danilov Monastery.

Feodorovsky Convent in Pereslavl-Zalessky is not as well-known or as architecturally significant as some of the other religious sites in the Golden Ring, but this monastery played an important role in early Russian history. 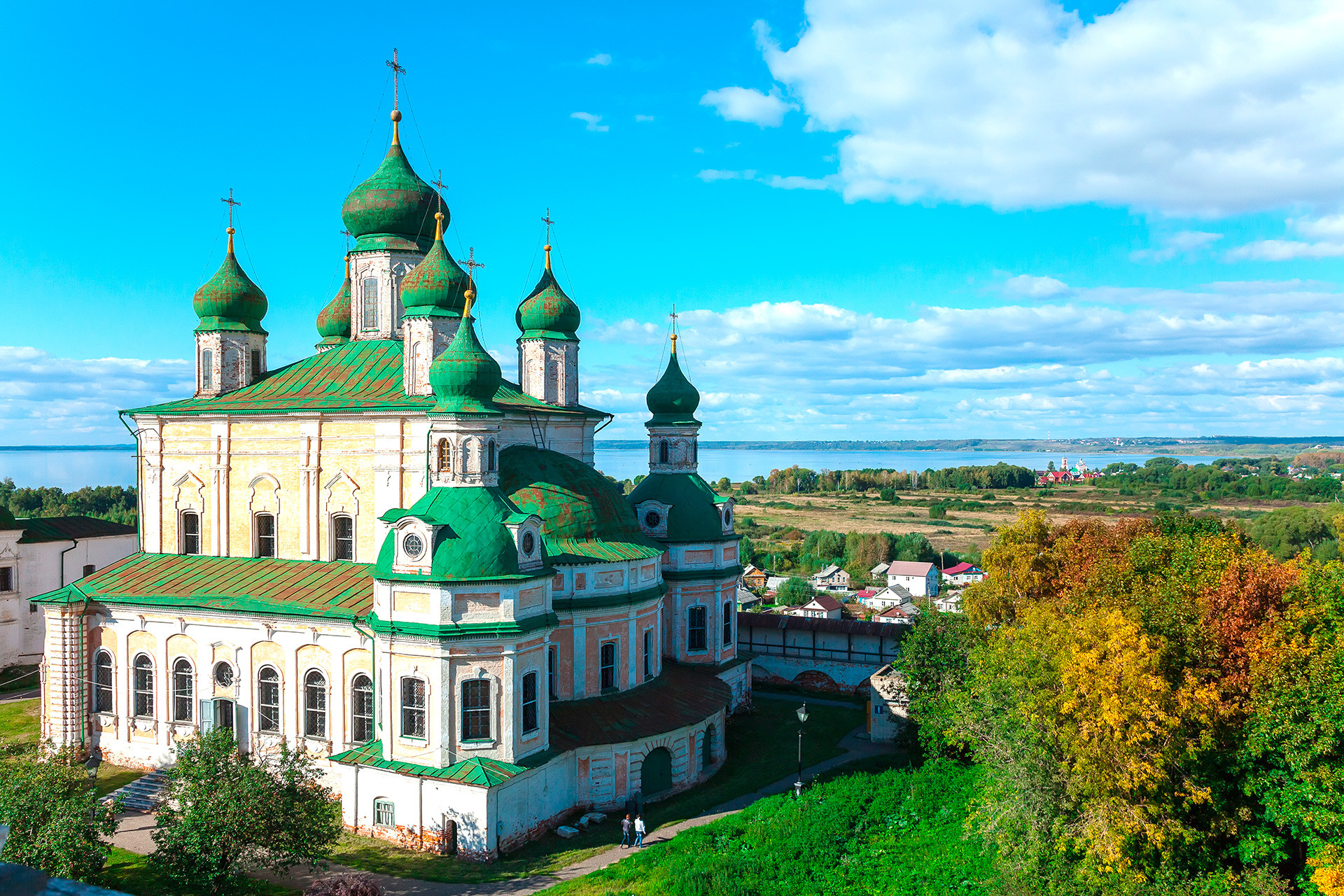 Rostov the Great is one of the most ancient Russia’s cities. It was first mentioned in the Primary Chronicle for the year 862. In this year, the Varangian brothers were invited to Rus. To distinguish the town from Rostov-on-Don in southern Russia, it also goes by the name Rostov Veliky, i.e. Rostov the Great.

Take a look at Rostov from above.

The main landmark of Rostov is its Kremlin, which has remained mostly unchanged over the centuries.

Also you can read about Rostov’s most colorful church. 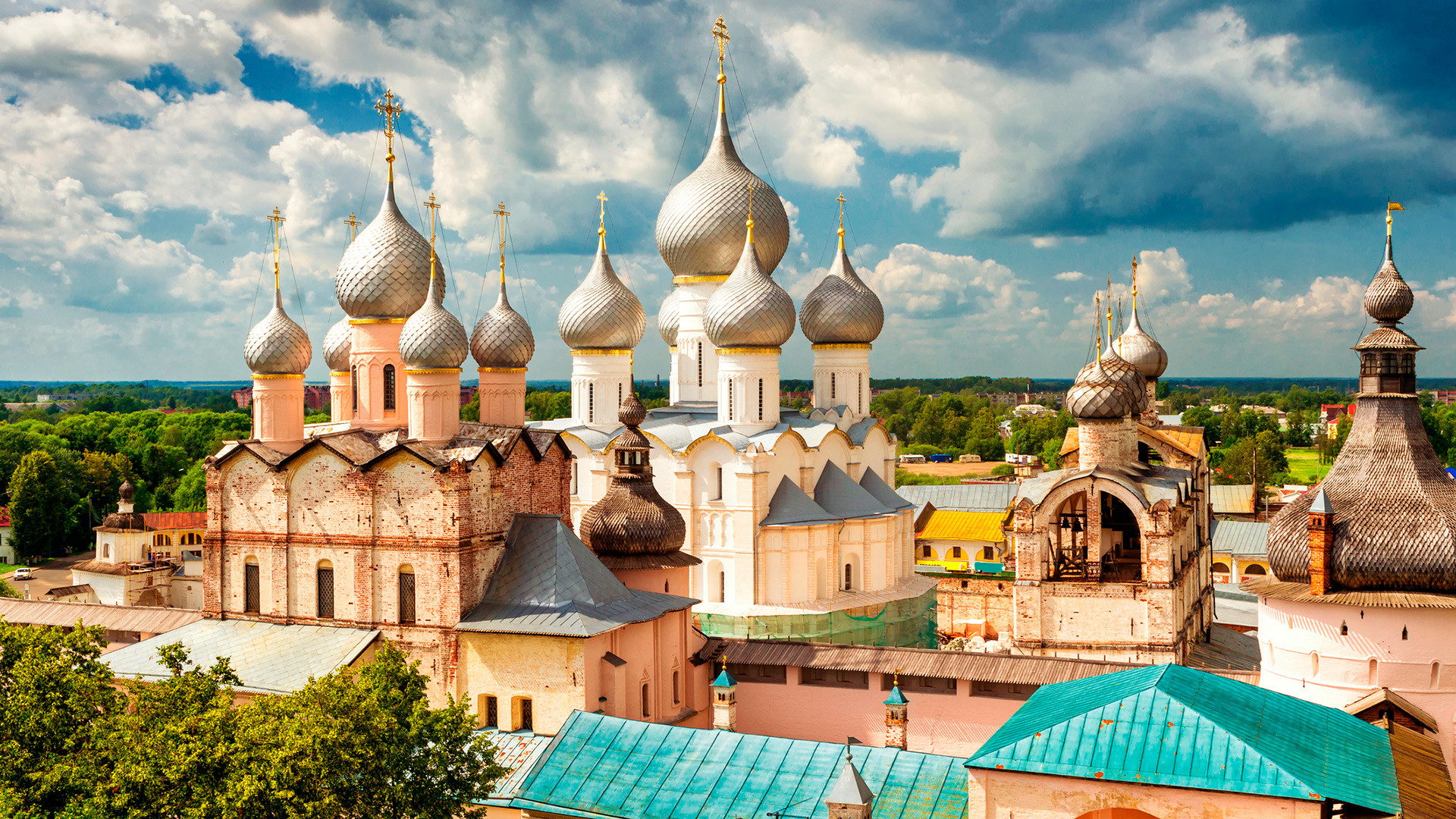 Sergiyev Posad is the closest to Moscow of all the ancient towns on the Golden Ring with a long history that dates back to the 14th century.

Watch a video tour around the city.

The town's main place of interest is the famous Trinity-St. Sergius Lavra, founded in the middle of 16th century. 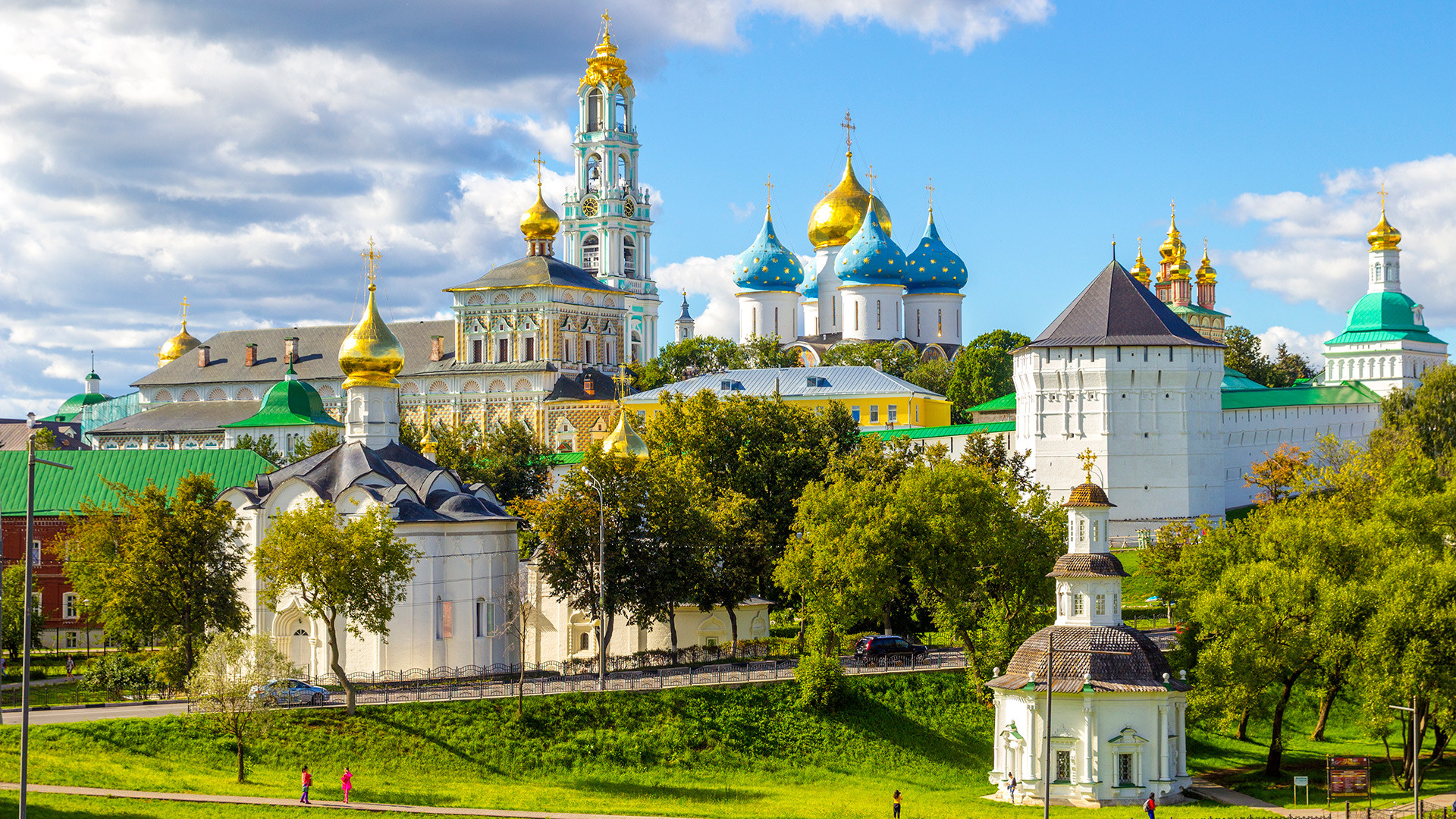 The first mention of the settlement dates back to 1608, so Ivanovo is one of the youngest city of the Golden Ring.

Sometimes it’s also called “The City of Brides,” because for 1000 men there are about 1300 women. But this figure is, in fact, not hugely divergent from the national average. Therefore, the situation is not as tragic as it seems, and weddings in the city of brides occur just as frequently as anywhere else. Well, almost. 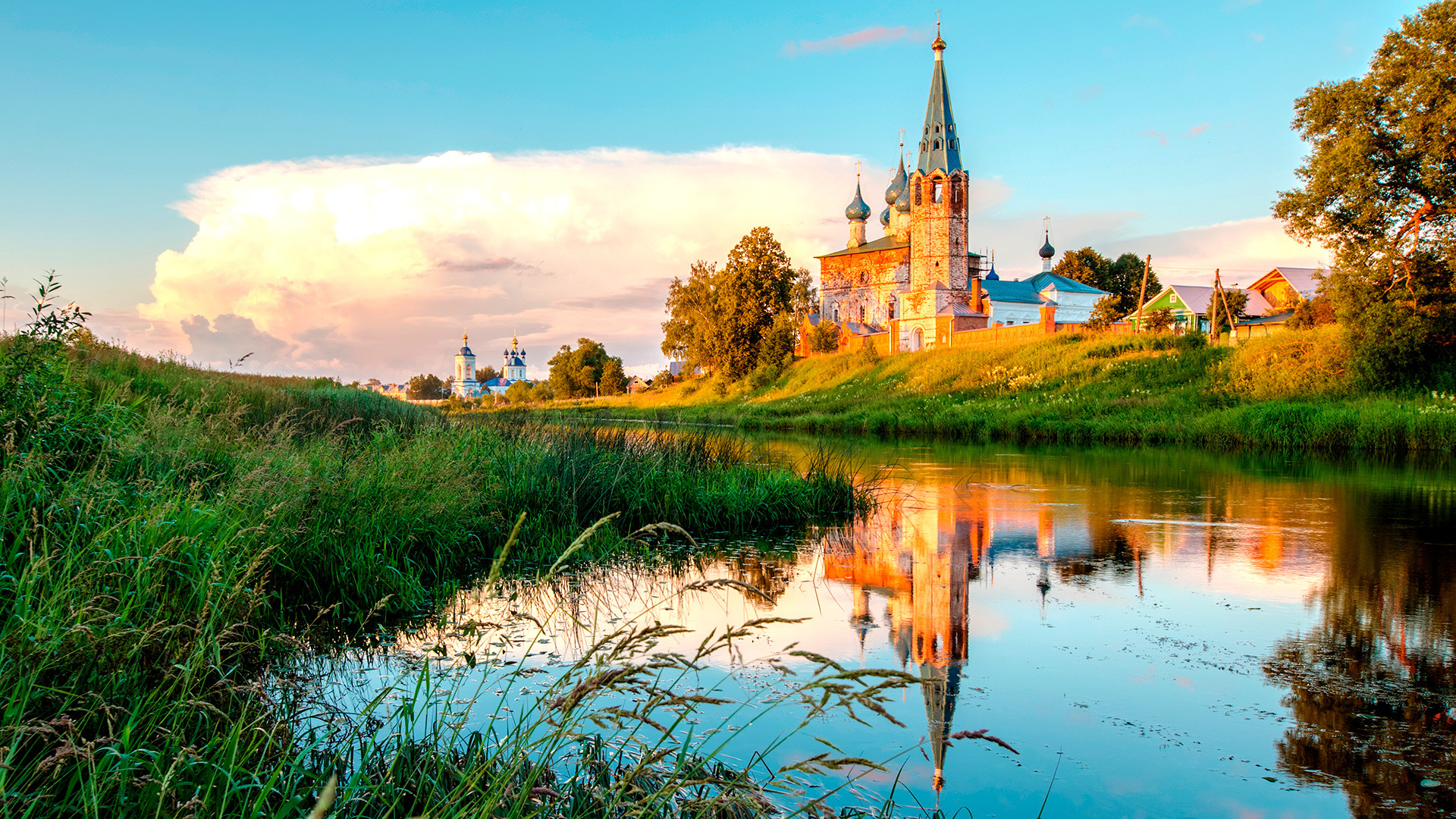 Other cities of the Golden ring

“Everything you wanted to know…” is an extended guide to the most popular topics about Russia. We constantly work on new material, and this page will be updated with new entries and information as it’s received.