Everything you need to know about the Cold War 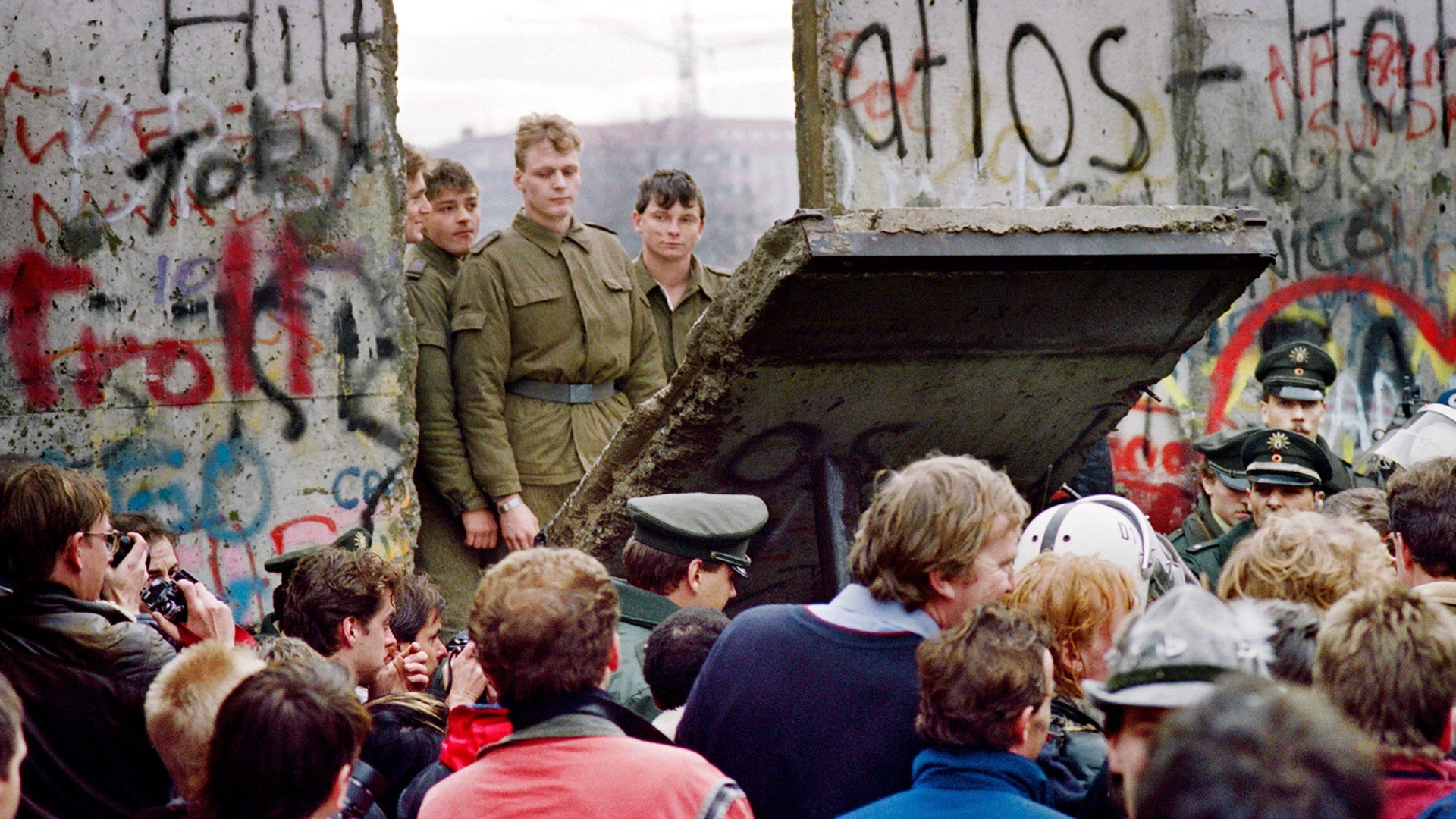 AFP
By using some of our most popular articles, we’ve put together a guide to one of the greatest confrontations in world history.

The world didn’t have time to rest after the devastating World War II, with a new global war soon after. Thankfully, just a “cold” one. But why did former allies, who yesterday greeted each other warmly and shook hands along the Elbe River, become enemies? Who is to blame for the start of this conflict?  You can read how historians answer these questions and more here. 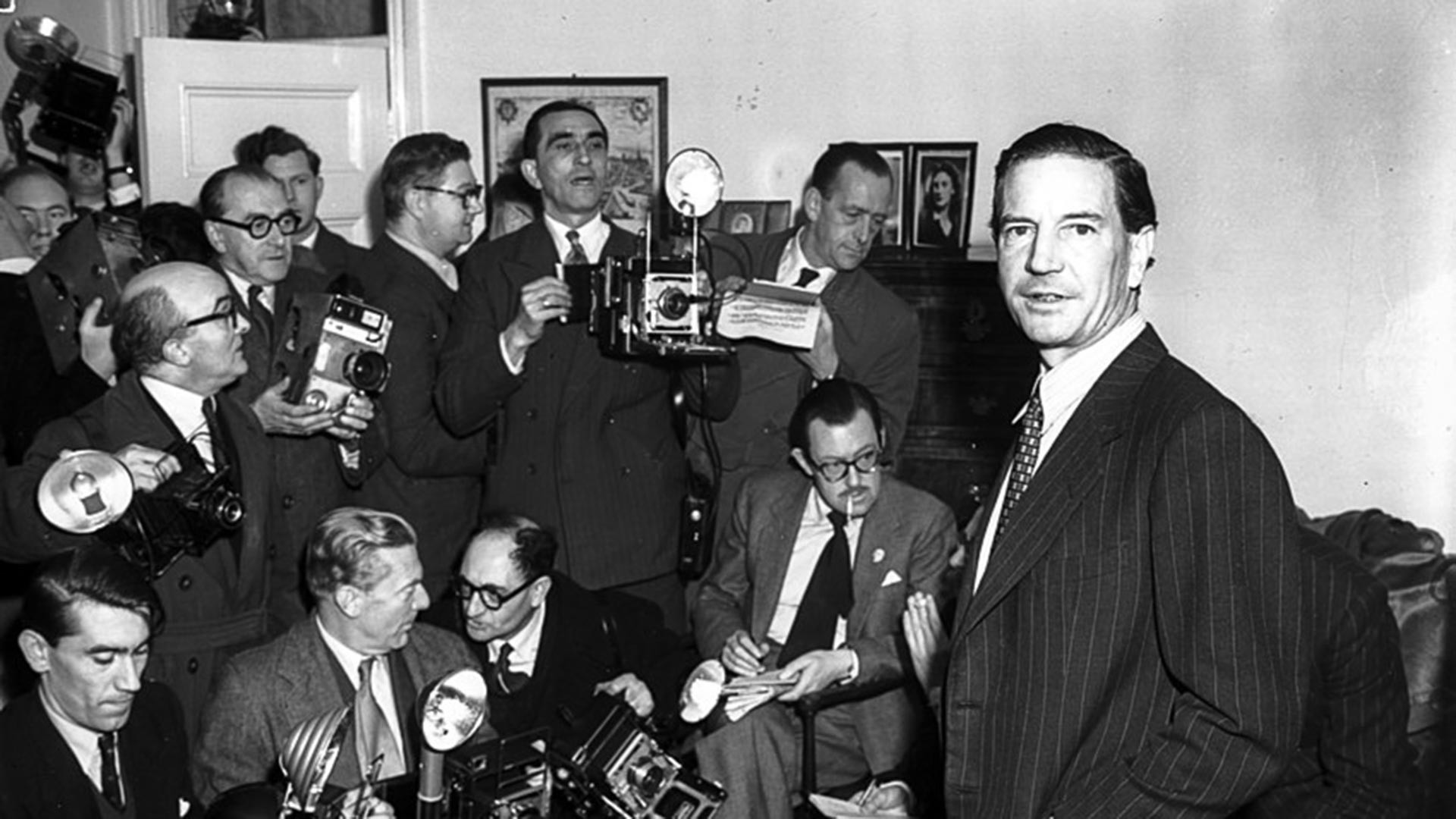 Kim Philby was the best-known member of the Cambridge Five Soviet spy ring in the UK.

The Cold War wasn’t about major battles between the Soviet Army and Western Allies’ troops on any battlefield. This was a hidden war between special services and intelligence officers. Read our materials about major CIA operations against the Soviet Union and those by the KGB.

During the whole second half of the 20th century, the two superpowers had been preparing for the outbreak of a “hot” war, which could have broken out at any minute. However, until this moment came, it was vitally important to prepare for the hostilities as best as possible: get the full information on the enemy’s military potential, unlock its weaknesses, find out about its latest technology developments, etc. Nobody could do this job better than spies.

And here you will find unique photos of the rare and special spy equipment and weapons, confiscated by Soviet counterintelligence and kept nowadays at the Russian FSB Central Border Museum. The rich collection includes pistols, mini cameras, recording devices, knives, fake wigs and moustaches - all belonging to CIA agents.

If you ever visit Moscow, use our guide to see where the KGB and CIA confronted each other in the Soviet capital. Spy games were held even at one of the country’s main symbols - Saint Basil’s Cathedral, two steps away from the Kremlin.

It would be wrong to suppose that while the CIA and Mi6 infiltrated into the USSR, the KGB sat idly by. Read about Kim Philby, the Soviet Union’s best spy in Britain, who for 10 years was head of the department devoted to countering Soviet espionage, but in fact was Moscow’s most important agent in London.

Philby wasn’t the Soviet intelligence’s only successful agent. Read about other effective spies, who occupied high positions in western special services, but remained devoted to the ideals of the World Revolution.

Did you know that courtesy of Melita Norwood, Stalin was better informed about the construction of the British nuclear bomb than most members of the UK Cabinet? Find out how this happened. 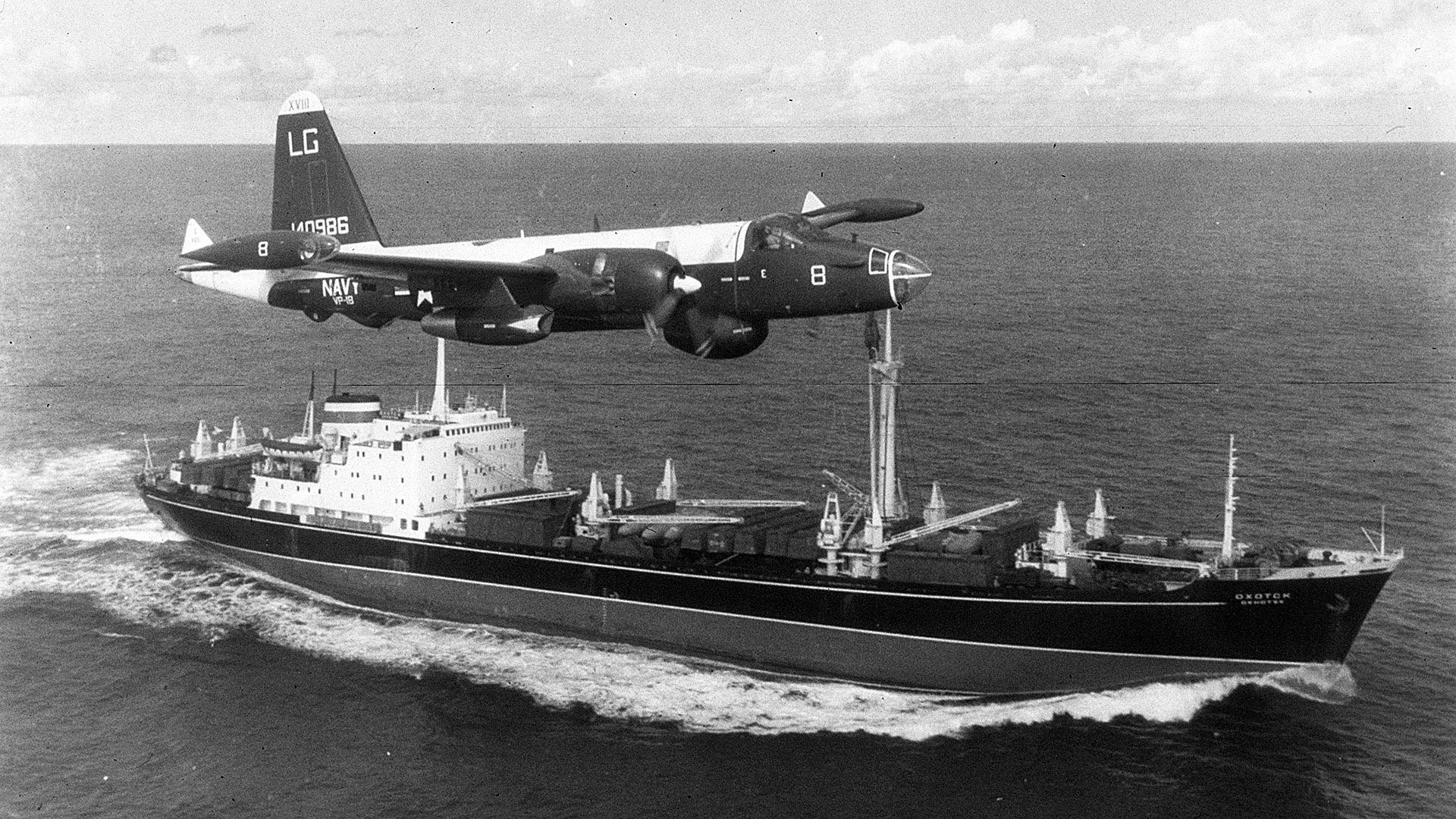 A P2V Neptune US patrol plane flying over a Soviet freighter during the Cuban missile crisis.

In 1962, the Cold War was the closest to turning into a hot one. The secret deployment of nuclear missiles and tens of thousands of Soviet servicemen to Cuba is still considered one of the finest military operations in Russian history. Find out how it went down here.

The crisis was solved due to direct negotiations between two countries’ leaders - Nikita Khrushchev and John F. Kennedy. However, the crucial role of the less notable actors remains mainly forgotten. Read here about how an American TV correspondent and a Soviet agent contributed much to averting the disaster.

While Moscow and Washington tried to negotiate, their Navies kept tracking each other off the coast of Cuba. Few know that one Soviet submarine armed with nuclear torpedoes was ready to launch an attack on the Americans. Read why this didn’t end up happening.

The Cuban Missile Crisis wasn’t the only episode, when the nuclear nightmare could be launched. Read about how, in 1983, the fate of the whole planet was in the hands of one Soviet officer.

Hot conflicts of the Cold War 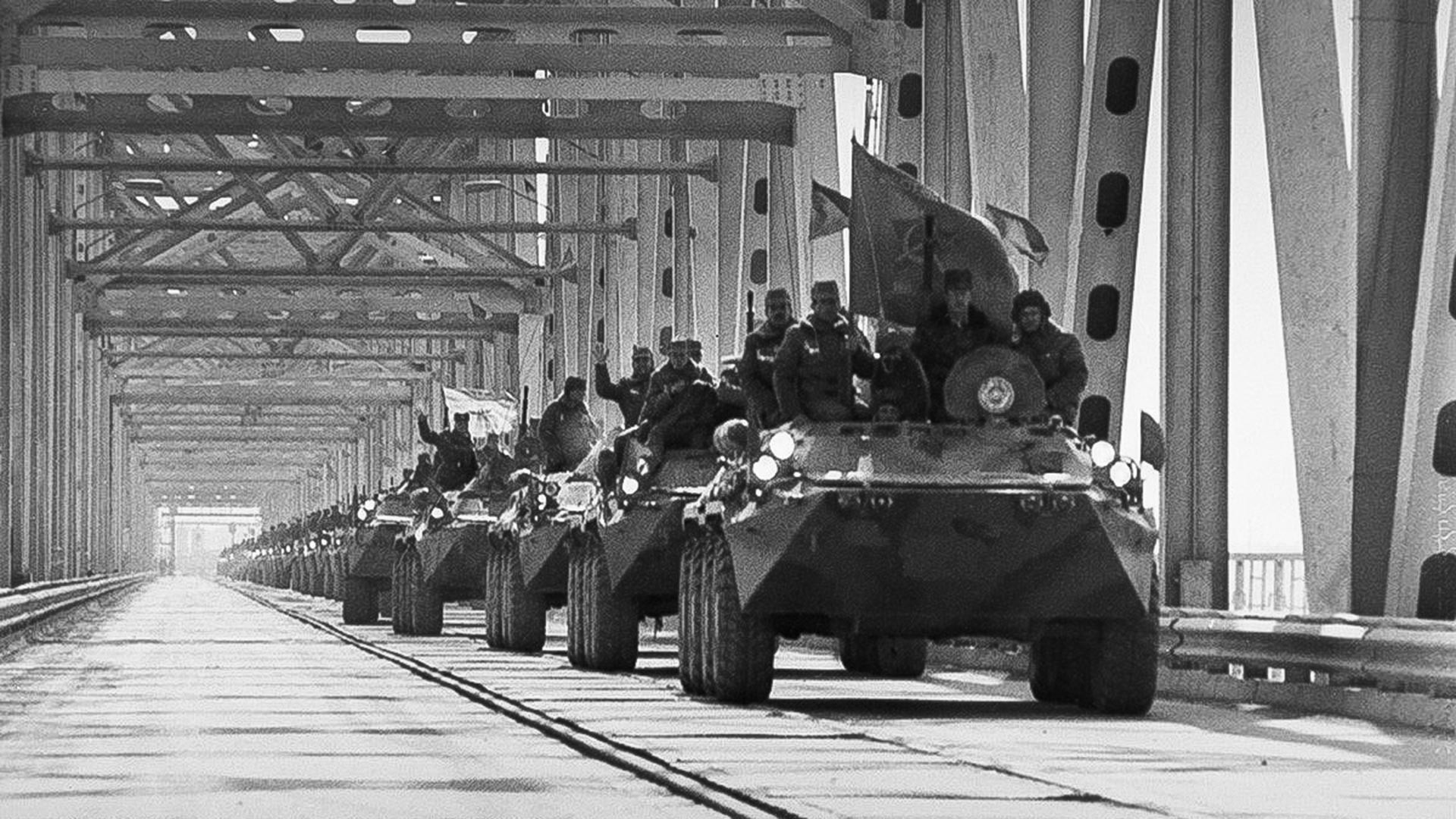 The Soviet Union and the U.S. didn’t lead an open war, but nothing prevented them confronting each other in regional proxy wars. Besides, no major conflict in the world happened without superpowers covertly sending their soldiers there. The most remarkable example is the Korean War, during which the American and Soviet aces fiercely fought each other in the skies.

One of the most dangerous areas, where Americans and Soviets could have engaged in fighting was the open sea. Submarines permanently followed each other, ready to terminate the opponent, if the latter was preparing a potential nuclear strike. To shake the chaser off the tail, Soviet submarines conducted an unbelievable and almost impossible maneuver, which American sailors dubbed - “Crazy Ivan”.

There were also other dangerous episodes that could have had disastrous consequences. Read how U.S. Air Force bombed Soviet territory, how the two countries shot down each other’s planes and how a Soviet submarine rammed into a U.S. aircraft carrier. 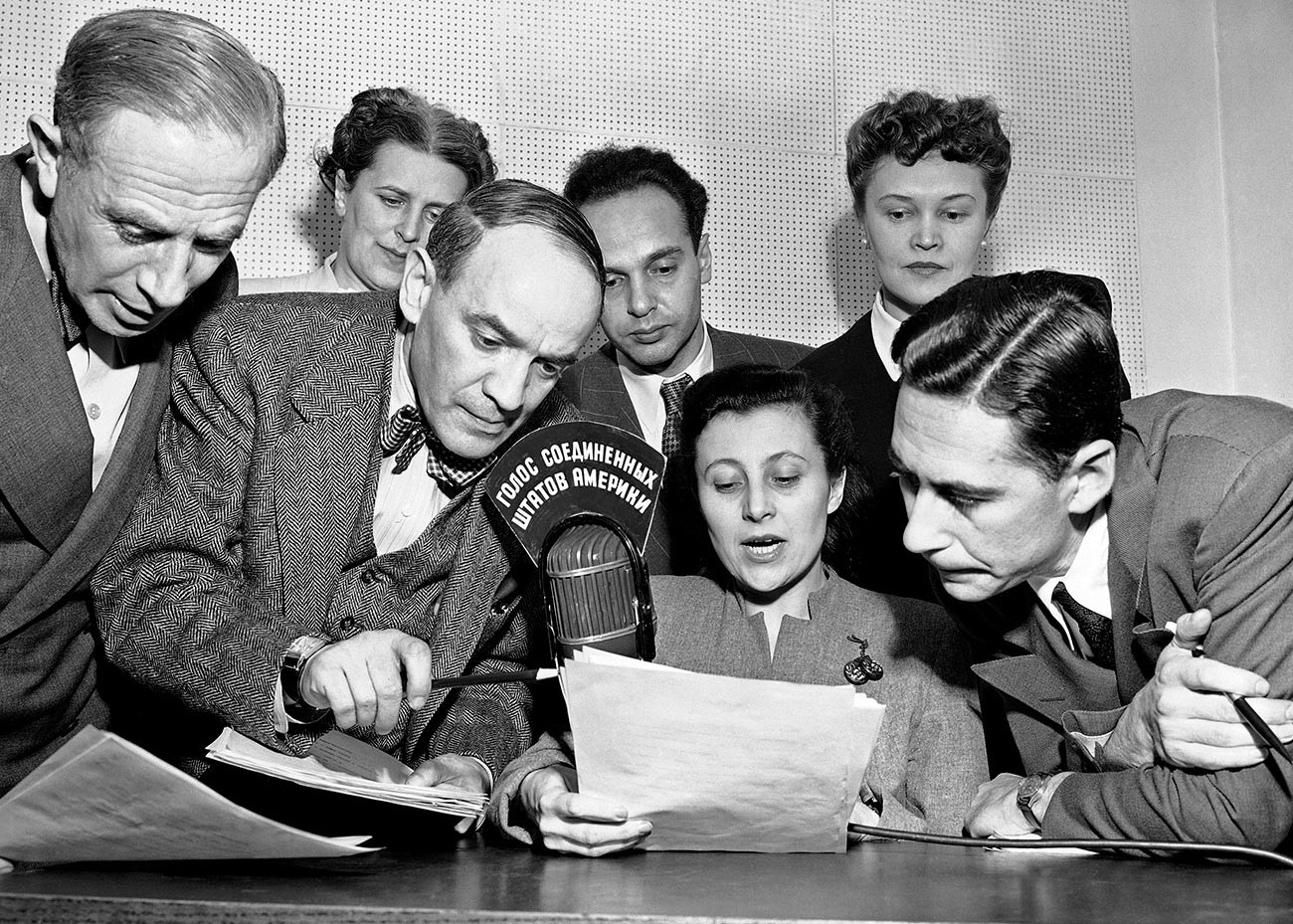 A group of State Department announcers huddle around the microphone after the initial shortwave broadcast in Russian to Russia from New York City on Feb. 17, 1947.

Words were by no means less important during the Cold War, than weapons. Read how the Voice of America radio station tried to reach the common Soviet citizens, and how the USSR tried to prevent this.

To depict an enemy at its worst is an indispensable part of each propaganda war. Check out our anti-American poster collection.

Did you know that it was the CIA who first published Boris Pasternak’s ‘Doctor Zhivago’ in Russian in the West? Find out why they did this here.

Don’t miss our list of movies devoted to the topic of the Cold War. There you can find classics, filmed during the period of the conflict, as well as newer, post-war ones, made with an effort of a neutral eye, without any ideological cliche. 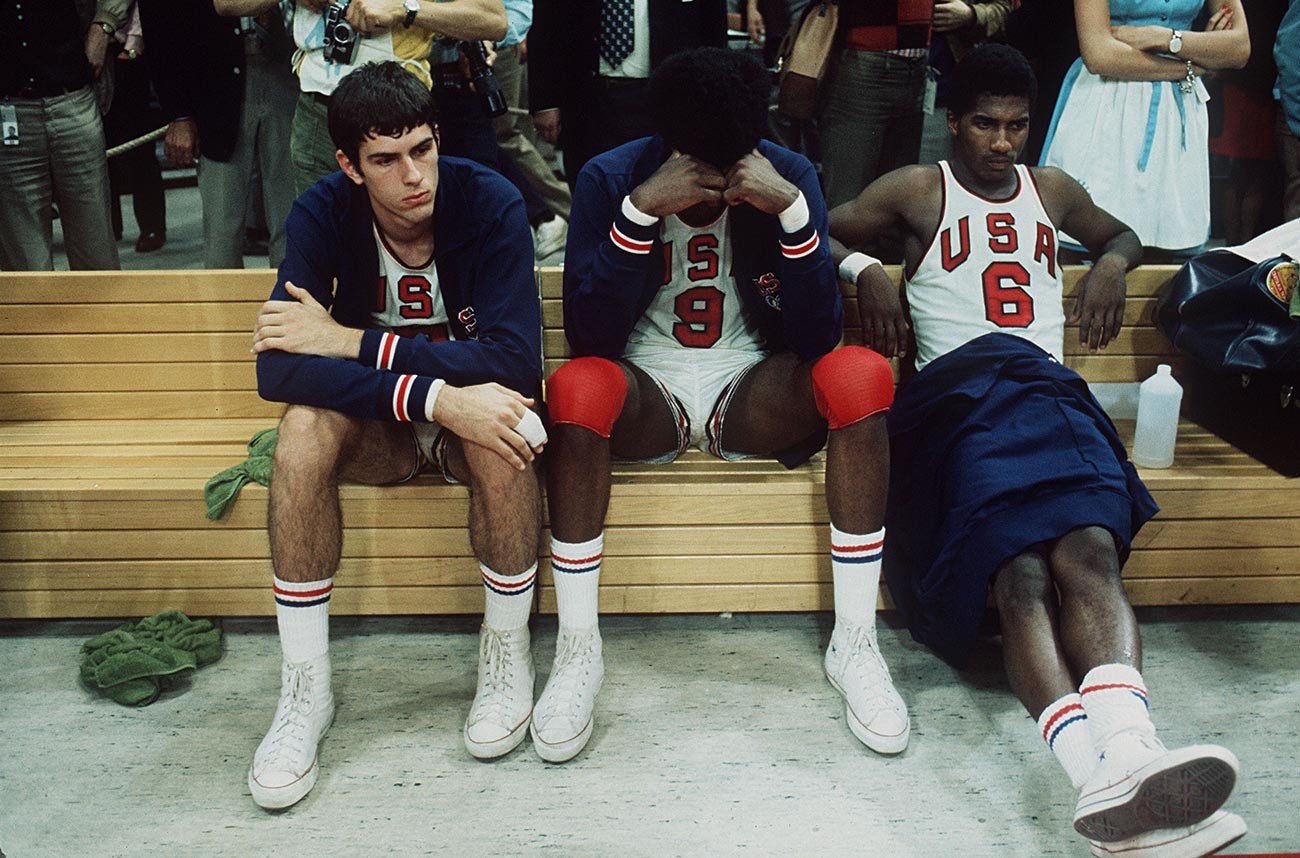 The US basketball team shows their frustration to the decision of the officials giving the gold medal to the Soviet Union in at the Olympic games in Munich, West Germany, in 1972.

Soviet-American battles in the hockey or basketball arenas were sometimes more essential than clashes between pilots in the skies over Korea or the Soviet-Iranian border. A triumph of one or the other country in sporting competition loudly demonstrated the superiority of the winner to the whole world.

During the 1972 Olympic games, the U.S. and Soviet basketball teams played one of the most scandalous finals in history. Read our article to find out why Americans refused to acknowledge the USSR’s victory.

Tensions between the superpowers were sometimes so high, that even for the sake of the Olympic Games, they couldn’t give their confrontation a break. Here you can read why the Soviet Union and the countries of the Eastern bloc ‘missed’ the Olympics in Los Angeles in 1984.

Check out our list of the most interesting movies about the Soviet-American battles in sport: from hockey to chess.

Common people caught in the middle 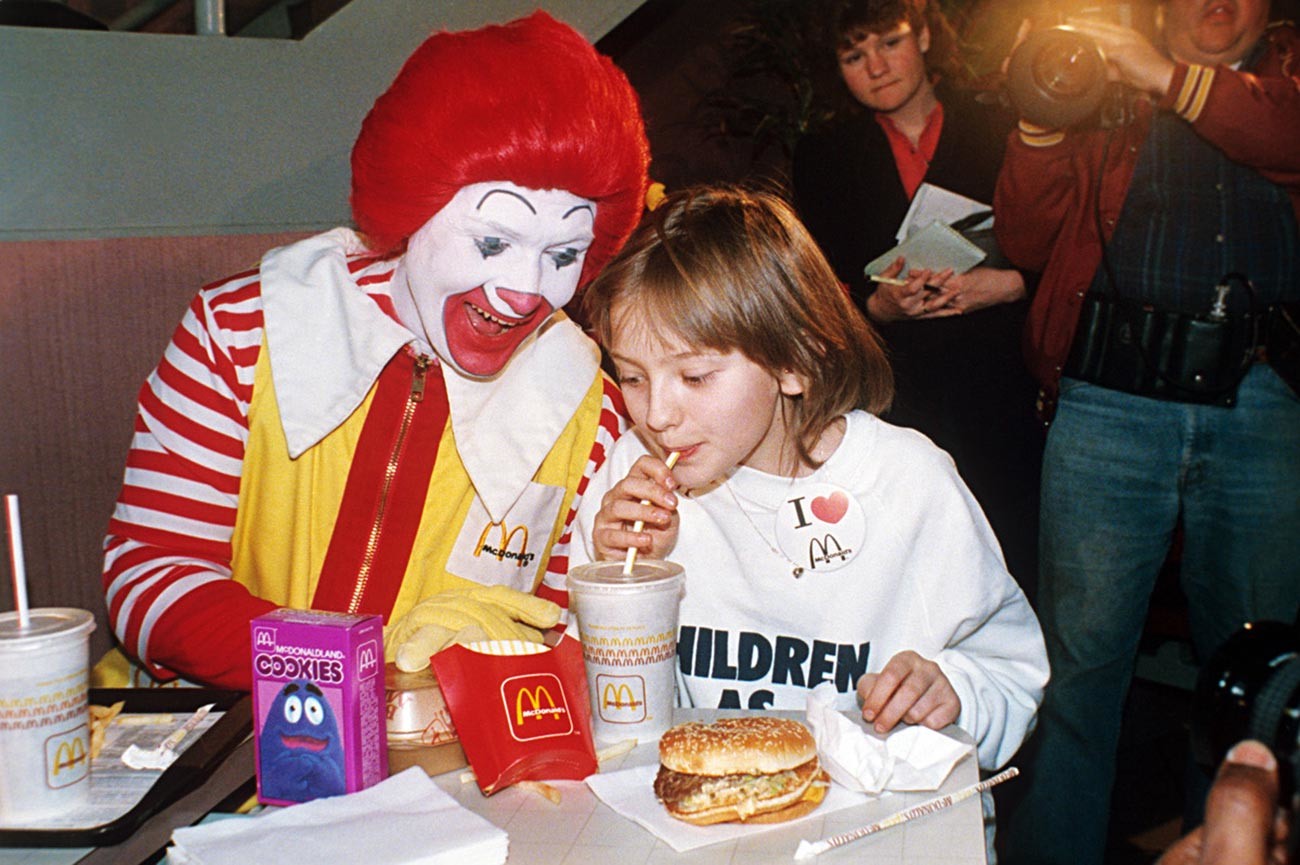 Not everybody was fond of the Cold War, and of living in permanent fear. While governments and special services fought each other, some people tried to peacefully overcome the Iron Curtain.

In the late 1950s, Soviet leader Nikita Khrushchev was obsessed with a revolutionary idea - to sow the whole country with corn. But the USSR didn’t have much experience in this area, so the Soviets asked the Americans for help. And one farmer agreed. Moreover, he even became friends with the mighty Soviet leader.

American businessman Armand Hammer was a unique man. Being so close to the Soviet leadership, he became a true bridge between the two nations. There is an opinion, however, that he occupied such a prestigious position thanks to his work on the Soviet special service.

In 1983, one small American girl named Samantha Smith sent a letter to Soviet leader Yuri Andropov with a direct question: whether he was going to start a nuclear war or not. She was invited to the USSR to see herself that “in the Soviet Union, everyone is for peace and friendship among peoples”. Several years after this notorious visit, the USSR sent its own emissary to the U.S. - Katya Lycheva.

In 1987, American swimmer Lynne Cox convinced Mikhail Gorbachev to let her swim across the Bering Strait between the U.S. and the USSR to demonstrate to both superpowers how close their people really were. Read her incredible story here.

End of the war 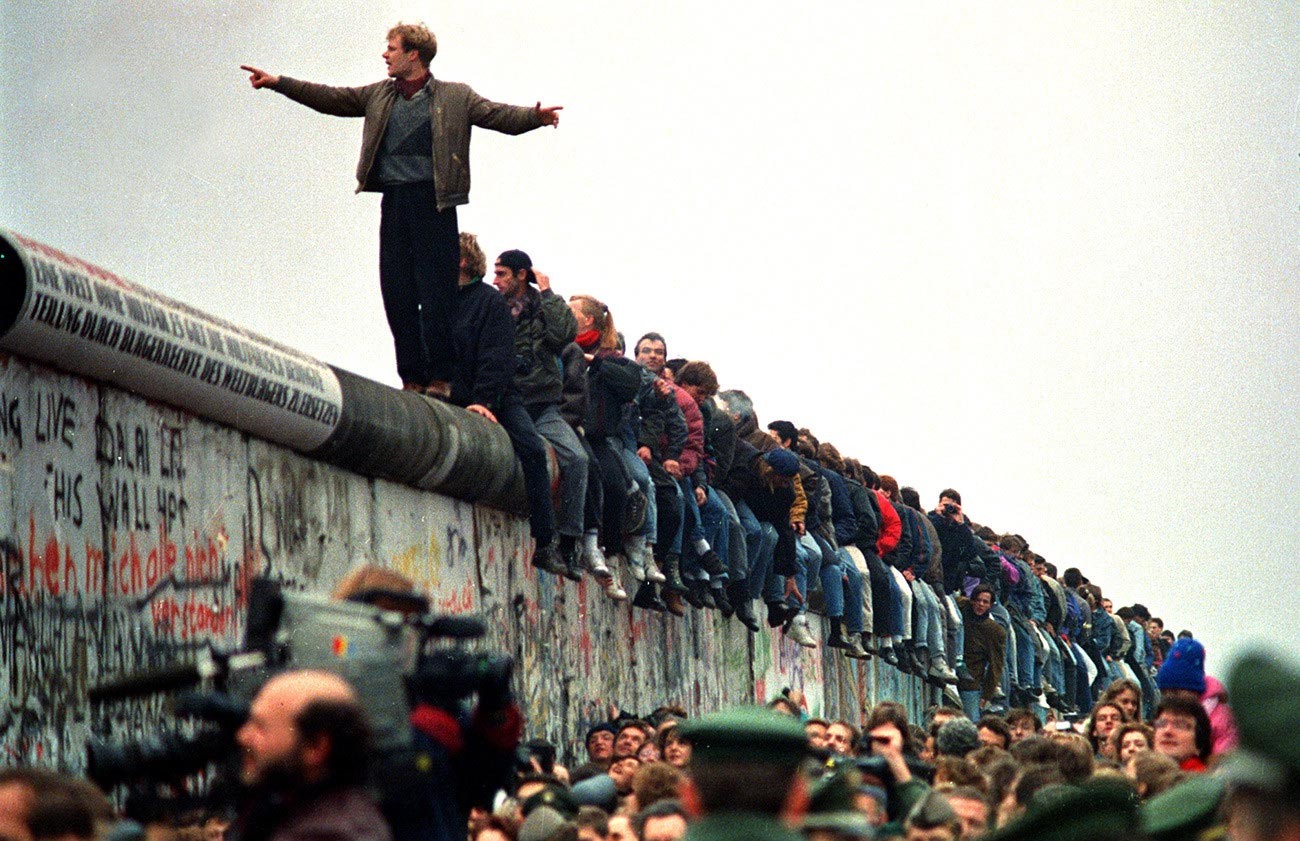 Crowds of GDR citizens started to dismantle it to reestablish the connection with West Berlin, Nov. 9, 1989.

When Mikhail Gorbachev chose the path of “perestroika” and normalization of the relations with the West in the mid 1980s, the Cold War era was coming to and end. You can read about the major events that brought the global confrontation to its end on our website, including: the disarmament and termination of the missile potential by the Soviets, the fall of the Berlin Wall and the large-scale withdrawal of the Soviet troops out of the Eastern Europe.